NEW YORK – Considering it was only in existence for 20 years – from 1879 to 1899 – the Kyser & Rex Co. left behind a treasure trove of mechanical and still toy banks that collectors clamored for during their years of production and still clamor for today. Kyser & Rex mechanical banks have fetched over $100,000 at auction, but common examples in well-worn condition can be found for $100 or less. As with most collectibles, condition and rarity dictate the price points.

Kaiser & Rex was formed in 1879 in Frankford, Pennsylvania, a neighborhood of Philadelphia, by inventors Louis Kyser and Alfred C. Rex. The company manufactured patented hardware, specialty items and novelties of all kinds, which they made from iron, brass and bronze. These included mechanical banks, still banks and bell-ringer toys. But it was the mechanical banks that really captured the imagination of the buying public in America. 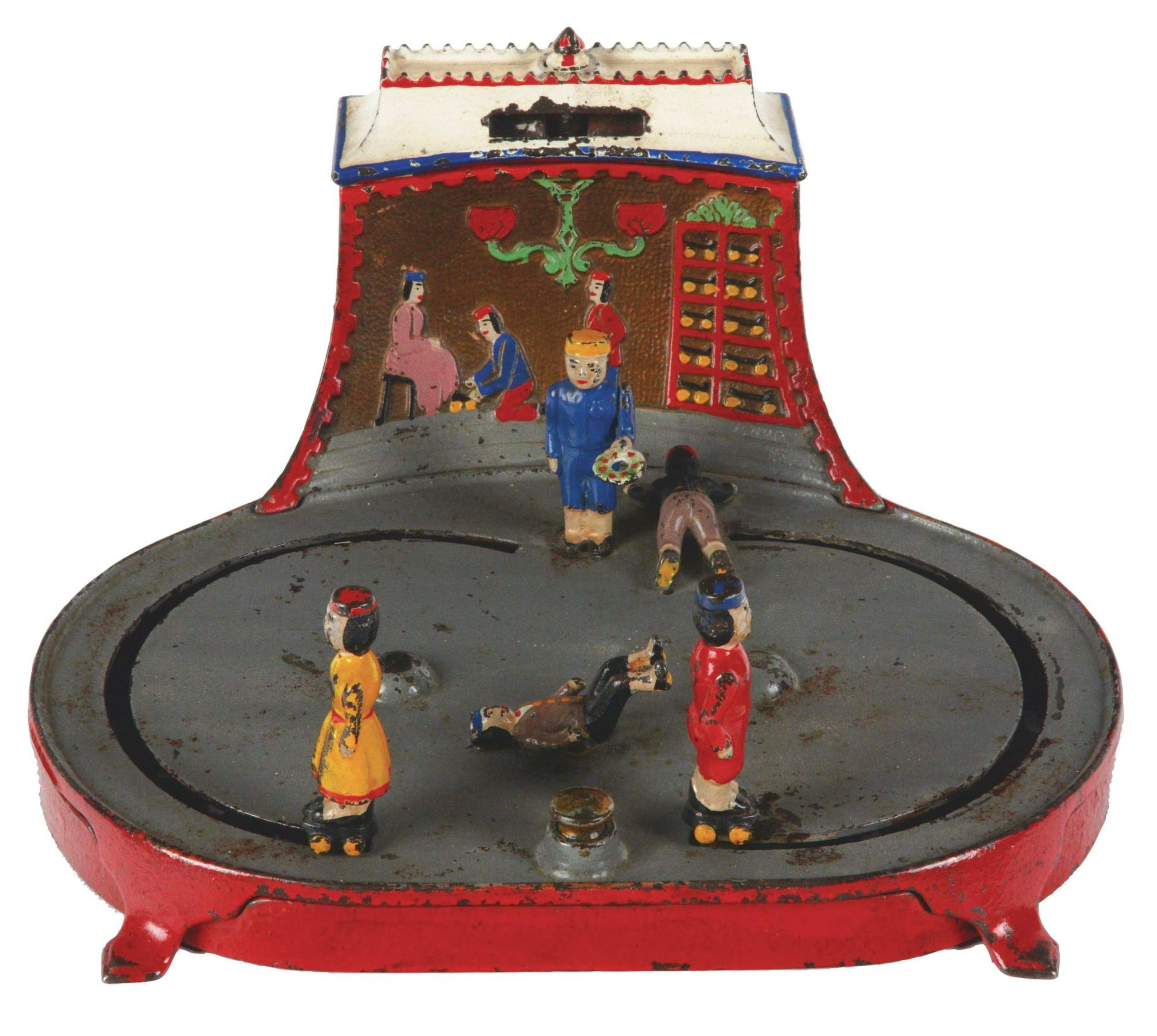 Kyser & Rex roller skating cast-iron mechanical bank. Place a coin in the slot on the roof and press the lever. The skaters glide to the rear of the rink as the coin falls into the bank, and the man turns as if to present a wreath to the little girl. To reset, slide the figures back to their original position. In near-mint condition, it sold within estimate for $107,520 at an auction held Sept. 24, 2019 by Morphy Auctions. Image courtesy of Morphy Auctions and LiveAuctioneers

The company got a boost with the hiring of Randolph Hunter, whose background as a mechanical engineer led to some ingenious toy bank designs, and who also happened to be an attorney, who helped Messrs. Kyser and Rex apply for and secure patents. By the early 1880s, Kyser & Rex had around 125 employees and four branch locations: in New York, Chicago, San Francisco and Philadelphia. Sales were around $150,000 a year, much of that attributable to mechanical banks.

The line included the Bowling Alley, Uncle Tom, Organ Banks, the Baby Mine Bank (Feeding the Child), Chimpanzee Bank, Confectionery Bank, Motor Bank, Dog Tray and Lion and Monkeys. In 1884 Louis Kyser left the firm and the company became the Alfred C. Rex & Co. (also known as Variety Iron Works). Rex later licensed production of his patented banks (such as Bucking Buffalo, which he invented) to other makers when he shut the business down in 1899. 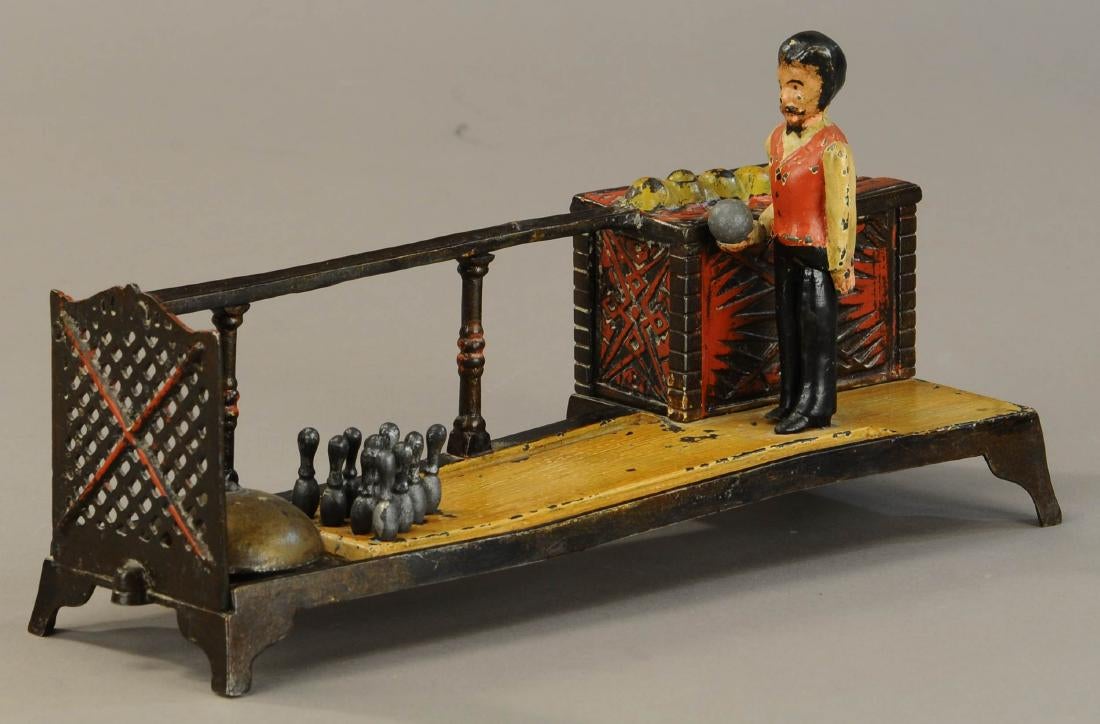 Only a few examples of the Kyser & Rex bowling alley mechanical bank are known. This one has been masterfully repaired and was repainted a long time ago. It was offered with three sets of bowling pins as well as several pages of literature about the bank. It sold for $20,000 at Bertoia Auctions on May 23, 2019. Image courtesy of Bertoia Auctions and LiveAuctioneers

Michael Bertoia of Bertoia Auctions in Vineland, New Jersey, said several factors play into why Kyser & Rex banks are popular with collectors. “The first is rarity, since they were not in business as long as some of their competition. Second, they were beautifully manufactured, very colorful toys with interesting themes and actions. And third, many of their banks have multiple functions with movement and deposits, as well as bell chimes or mechanically motorized parts.”

Bertoia pointed out that a common trend has applied to all bank collecting for years, to include Kyser & Rex examples – that “condition is king.” He said, “It is a double whammy when you have a rare Kyser & Rex bank in great, all original condition. Authenticity is important as well in driving demand. While it is acceptable to have a repair or a replacement piece on your 125-year-old bank, it is always preferable to have an all original piece, even in a lower condition grade.” 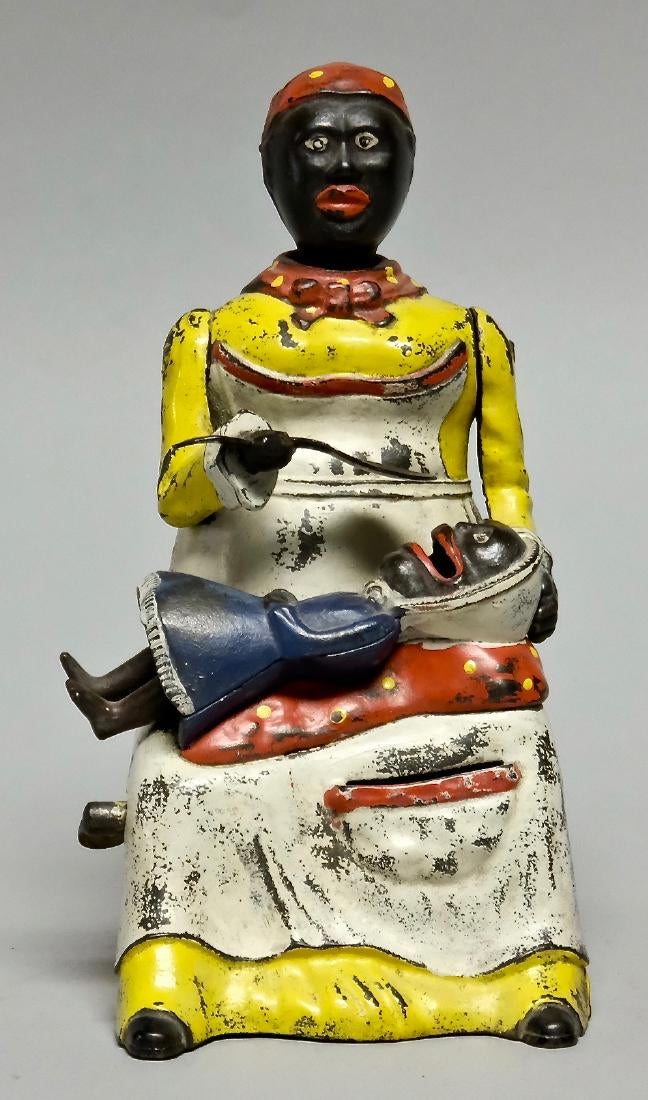 Cast-iron mammy and child mechanical bank made by Kyser & Rex, circa 1880s. Place a coin in the slot of the woman’s apron. When the lever is pressed, she will spoon-feed the child, nod her head and the baby’s feet will lift up, while the coin drops into the bank. The bank has been professionally restored and has a replaced spoon. Estimated at $800-$1,200, it sold for $2,432 at an auction held March 3, 2019 by Cyber Toy Auctions. Image courtesy of Cyber Toy Auctions and LiveAuctioneers

In his 1947 booklet on mechanical toy banks, the collector/dealer Louis H. Herz wrote, “The mechanical toy bank is a peculiarly American phenomenon. Indeed, not until the United States had developed was there a nation where enough children had coins for banks to warrant their commercial production. The still, or inanimate, toy bank, was made in a wide variety of forms and materials, including glass, porcelain, pottery, tin and wood, beginning around the 1840s.”

But still banks soon had a more elaborate competitor in the mechanical banks, in which action was necessary to deposit the coin, or, the insertion of the coin precipitated or was accompanied by some movement, often of an amusing nature. Such banks, in regard both to their creation and their manufacture, were a natural development of American life, and were made possible by the skill and ingenuity of American craftsmen. 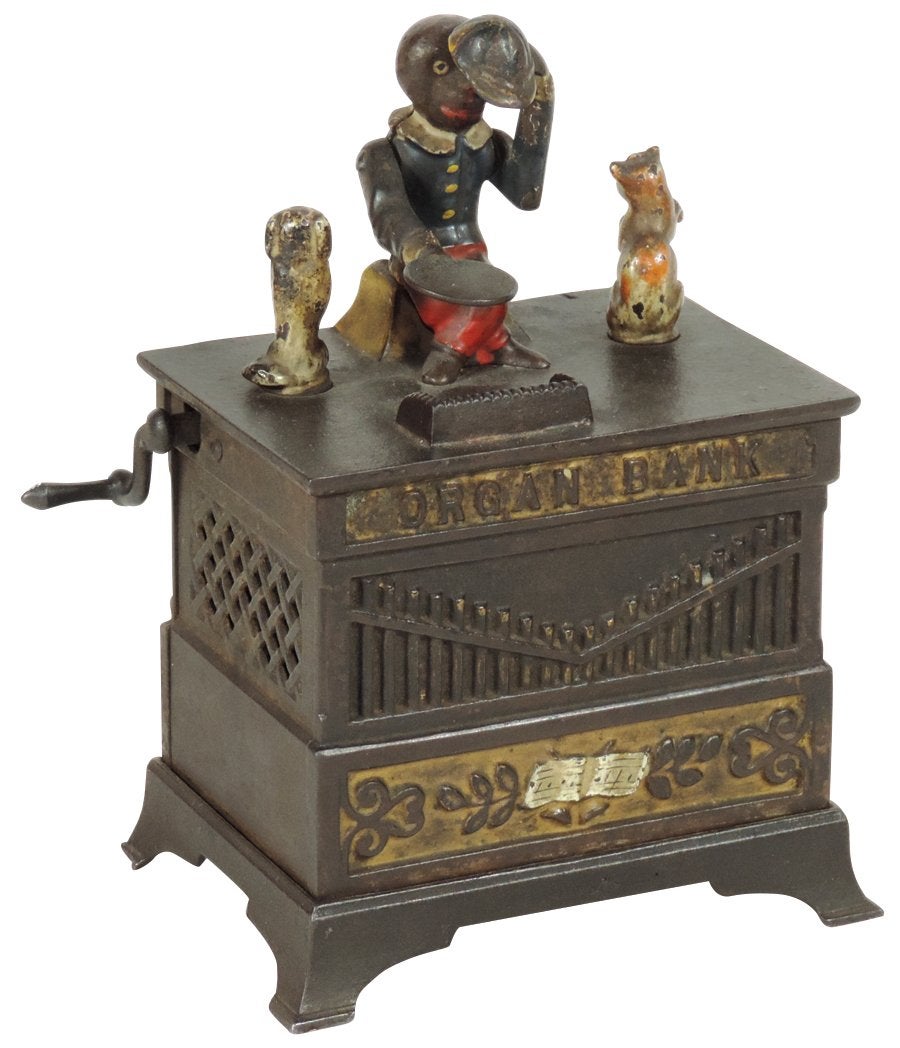 The first mechanical banks appeared soon after the close of the Civil War. The manufacture of these banks on a mass-production basis, and at low cost, was made possible by advances in the industrial revolution. Many of these American banks were destined to be copied later in Europe, especially in England. Mechanical banks, however, were not toys for Continental Europe. The German toy industry was unable to compete with the American makers in this category of toy. 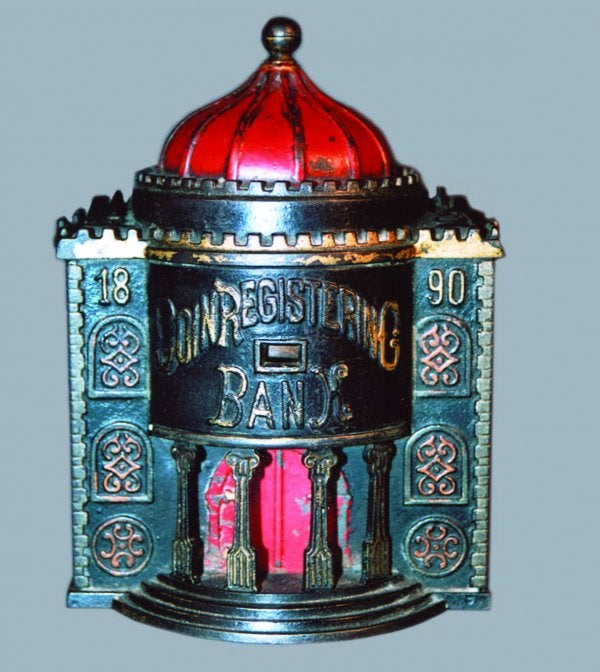 The types of mechanical banks manufactured seemed almost endless in their variety of designs. There were boys who swallowed the coin and rolled their eyes, William Tell shooting the famous apple off his son’s head with a coin, a horserace started by inserting a penny, and hundreds of other varieties. The mechanical bank was actually a dual-purpose toy – as an object designed to provoke an interest in savings, and a toy to play with. Children enthusiastically indulged in both.

“The mechanical banks are, of course, simply toys, and it is only when they are considered as toys that a proper valuation of their place in the general scene can be had,” Hertz wrote. “They were not a special class of merchandise; neither were they produced or sold as objects of art, a position to which some have tried to elevate them, by way of compensation for the fact that they are actually of much later origin than had originally been thought.” 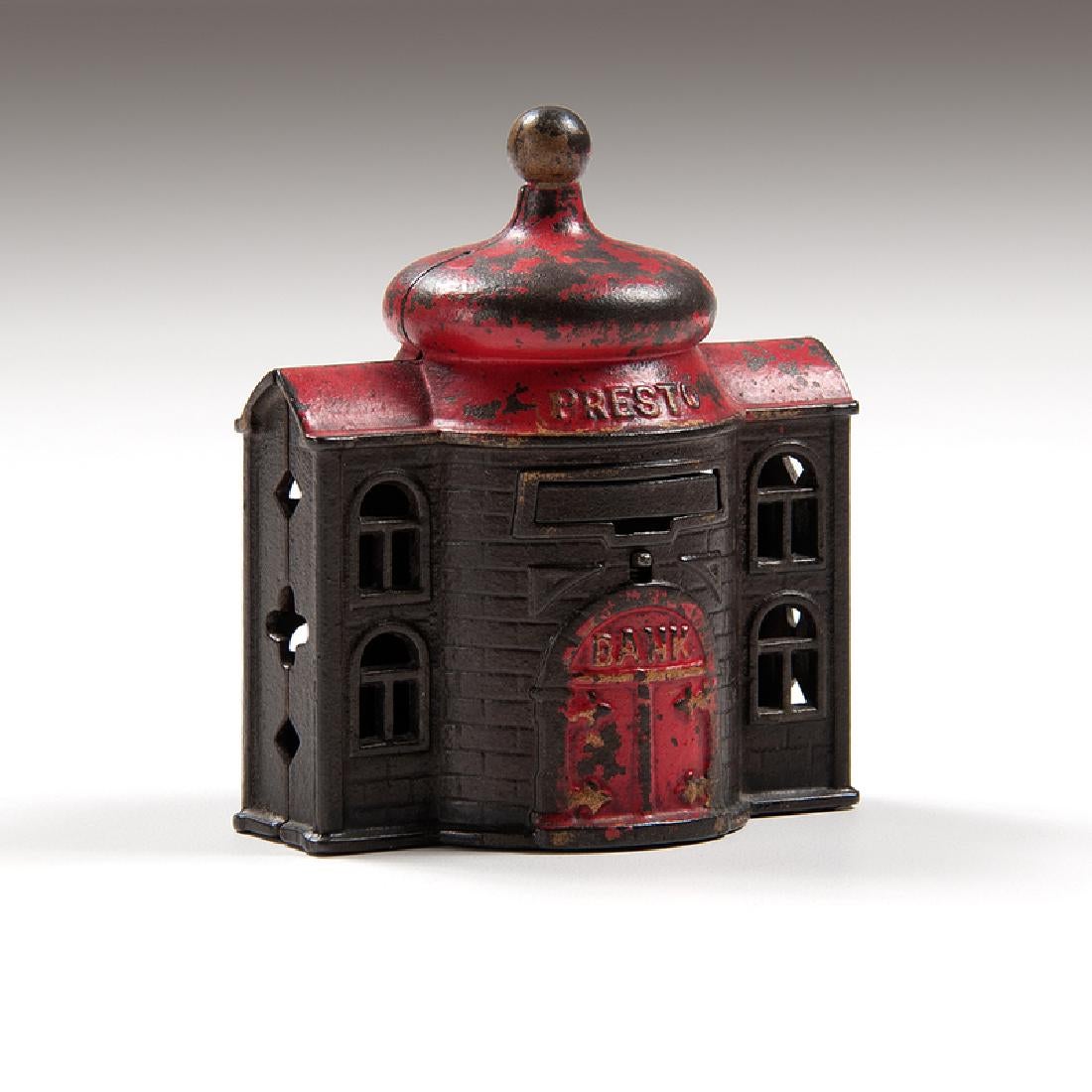 Late 19th century Kyser & Rex cast-iron mechanical bank, marked with the title ‘Presto Bank’ on front, ‘PAT APD’ on the back and ‘485’ on the underside. Press the lever to pop out a tray; place a coin on the tray and push it back into the bank. Estimated at $100-$200, this 4½-inch-high bank sold for $123 on July 20, 2018 at Cowan’s Auctions. Image courtesy of Cowan’s Auctions and LiveAuctioneers.

However, he added, “The actual production of the banks, the molding, finishing, assembling, painting and other operations, was manifestly a craft, and the original creation of the bank design or mechanism was quite definitely a form of art, of all the more importance and interest because it was the active, creative kind of real American minor commercial art which was transmitted into manufactured products for the use or amusement of the millions.” 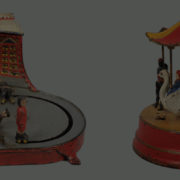