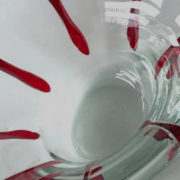 Jasper52 will conduct another Exquisite Decorative Art auction on Wednesday, Jan. 20. More than 200 lots of high-quality glass, metalware, figurines, pottery and porcelain objects will be offered. 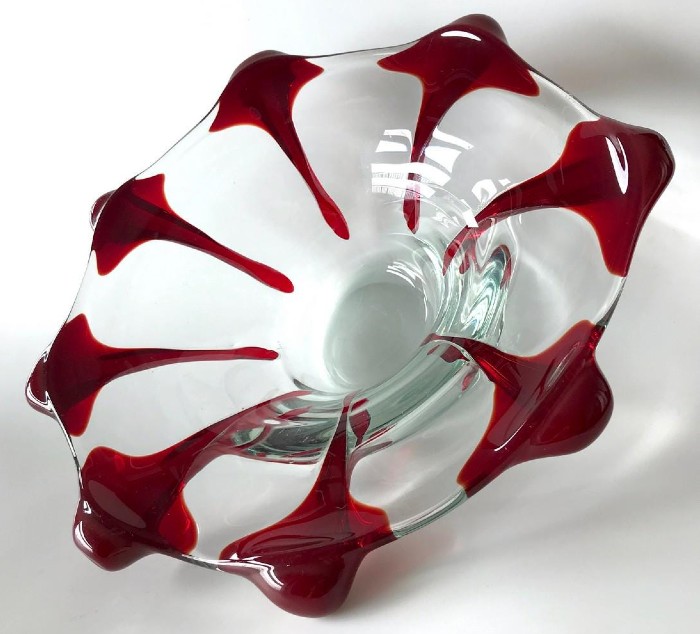 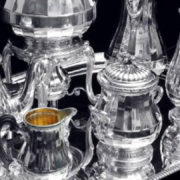 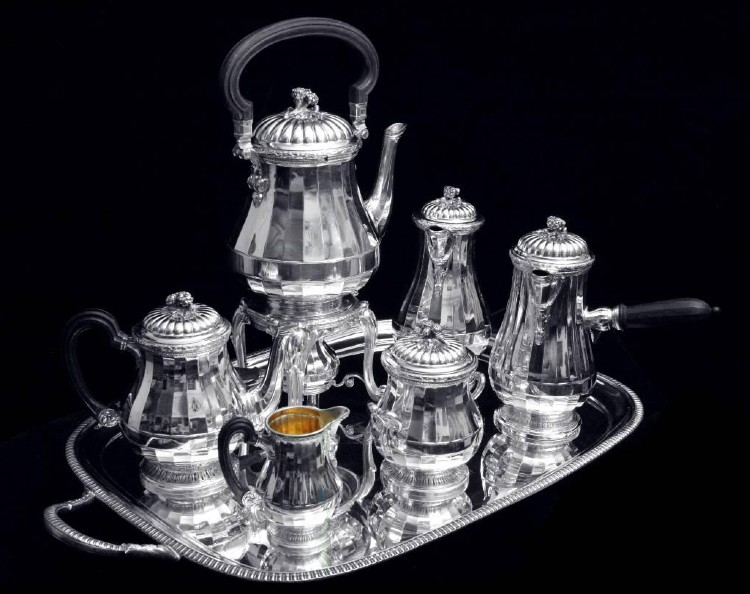 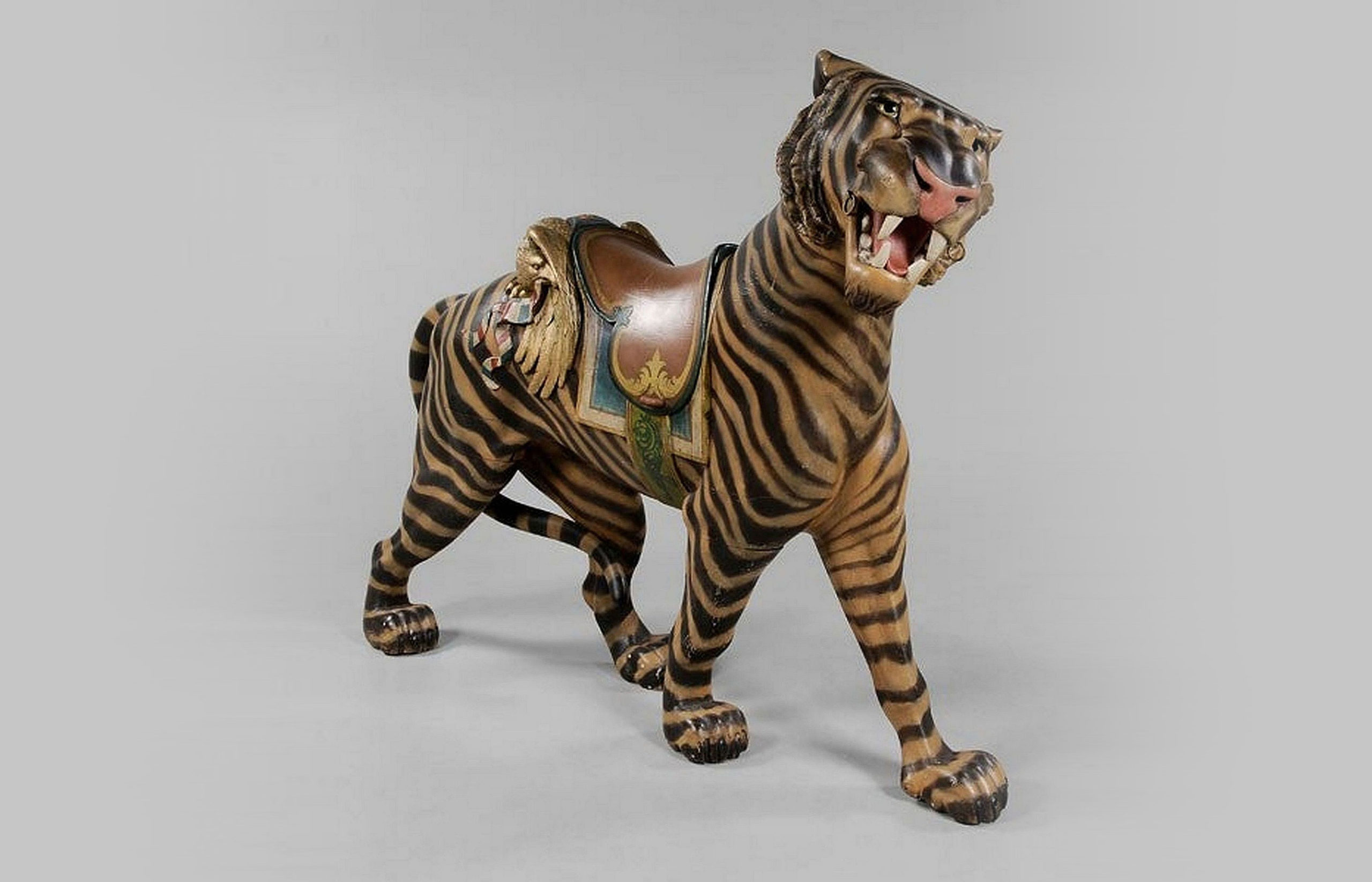 NEW YORK – Who, as a child, hasn’t whirled merrily like a top? Or spun a playground merry-go-round and hopped onto it for a thrilling ride? Carousels, which feature creatively-shaped mounts on rotating circular platforms, are the ultimate spinning amusement for fun-seekers of all ages.

Surprisingly, they originated in medieval times, when mounted knights, to hone their skills, tossed balls to one another while galloping in circles. Indeed, the word carousel originates from Italian and Spanish terms for “little battle.”

By Elizabethan times, circling jousters speared small, suspended rings. Within a century, similar ring-tilt carousels sprang up at fairgrounds across Europe. Wooden horses, suspended from central canopies, replaced riders. These popular amusements, powered by ponies or rope-pulling youngsters, however, had no platforms. So as they gained speed, the horses pushed outward centrifugally, flying free.

Their wooden stick-legs, heads and bodies, adorned with rabbit-skin manes and tails, were crude, wrote George Sanger in Seventy Years a Showman. But bright-white and “plentifully dotted with red and blue spots,” they thrilled the crowds. 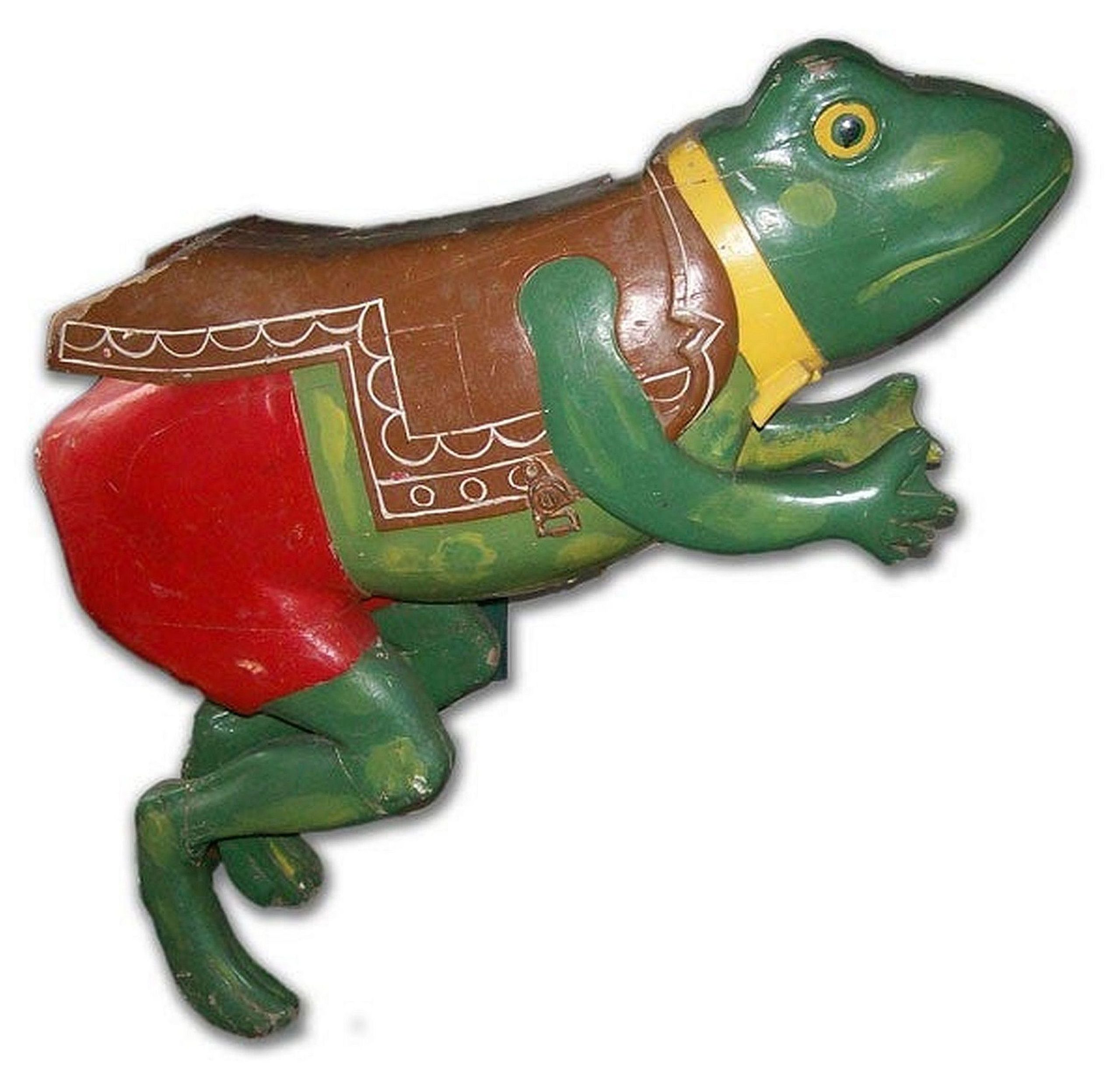 By the mid-19th century, newer models, featuring carved riding horses fixed to round platforms suspended from central poles, replaced flying-horses. Like earlier ones, however, these were pulled by man or beast.

When the first steam-driven carousel appeared a decade later, its impact was profound. A Halifax Courier journalist described its … “huge proportions, driven by a steam engine which whirled around with such impetuosity, that the wonder is the daring riders are not shot off like cannon- ball, and driven half into the middle of next month.”

Soon afterwards, Frederick Savage, an enterprising British engineer, incorporated farm machinery into fairground rides — including carousels. According to Victorian fairground manufacturer Frederick Savage, The Platform Galloper, his best-loved carousel, “imparted a vigorous rocking motion to the mounted horses via a series of eccentrics under the platform.” Later models featured platform slides — which swang poled-mounts concentrically as carousels gained speed — as well as gears and off-set cranks, which created up-and-down “galloping.” 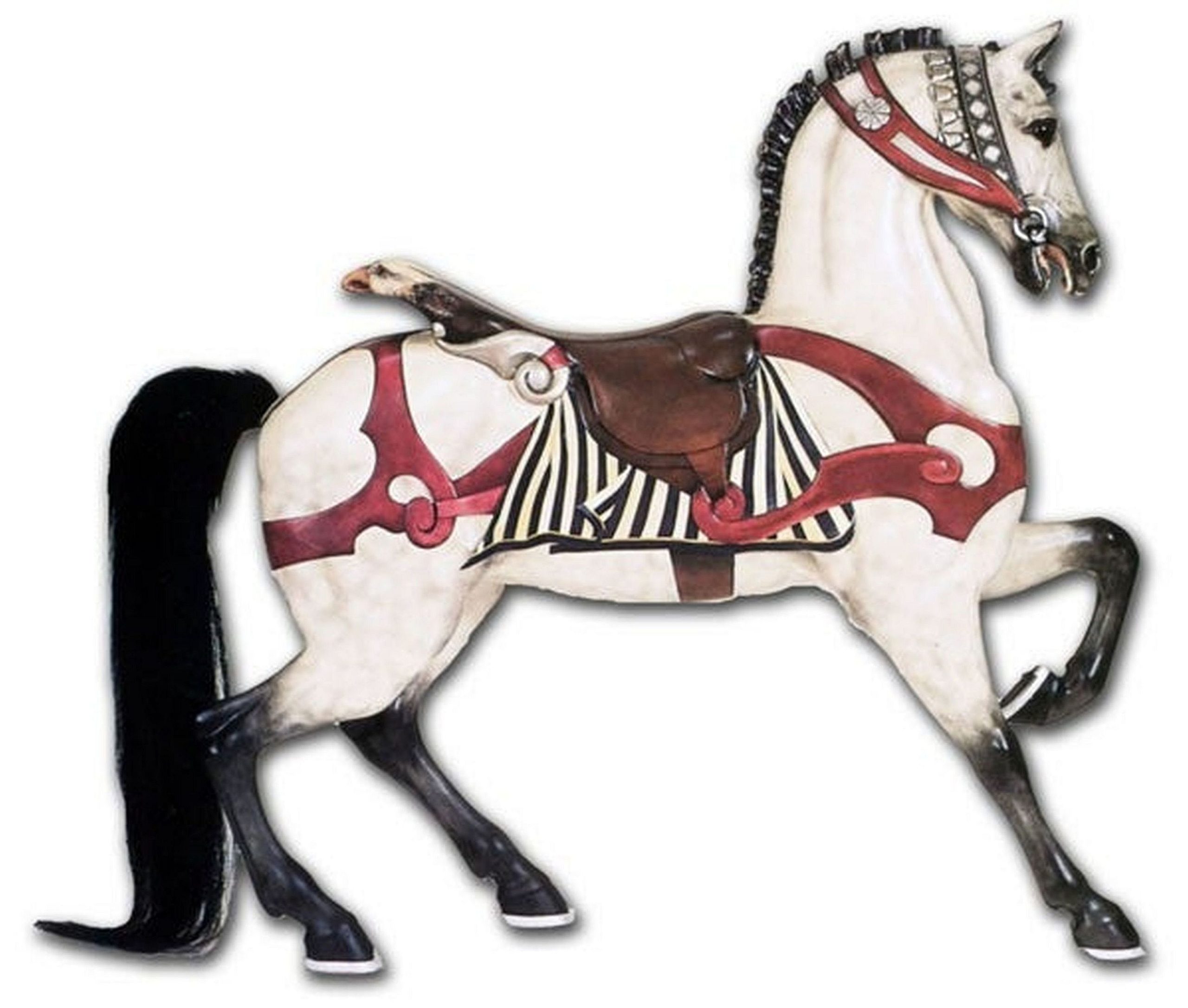 Until the Great Depression, thousands of American fairs, towns, cities, and amusement parks hosted carousels. Afterward, many were closed, destroyed, or abandoned. While some reopened as the economy improved, they were overshadowed by more thrilling rides and were no longer main attractions. Today, some 400 are believed to exist. 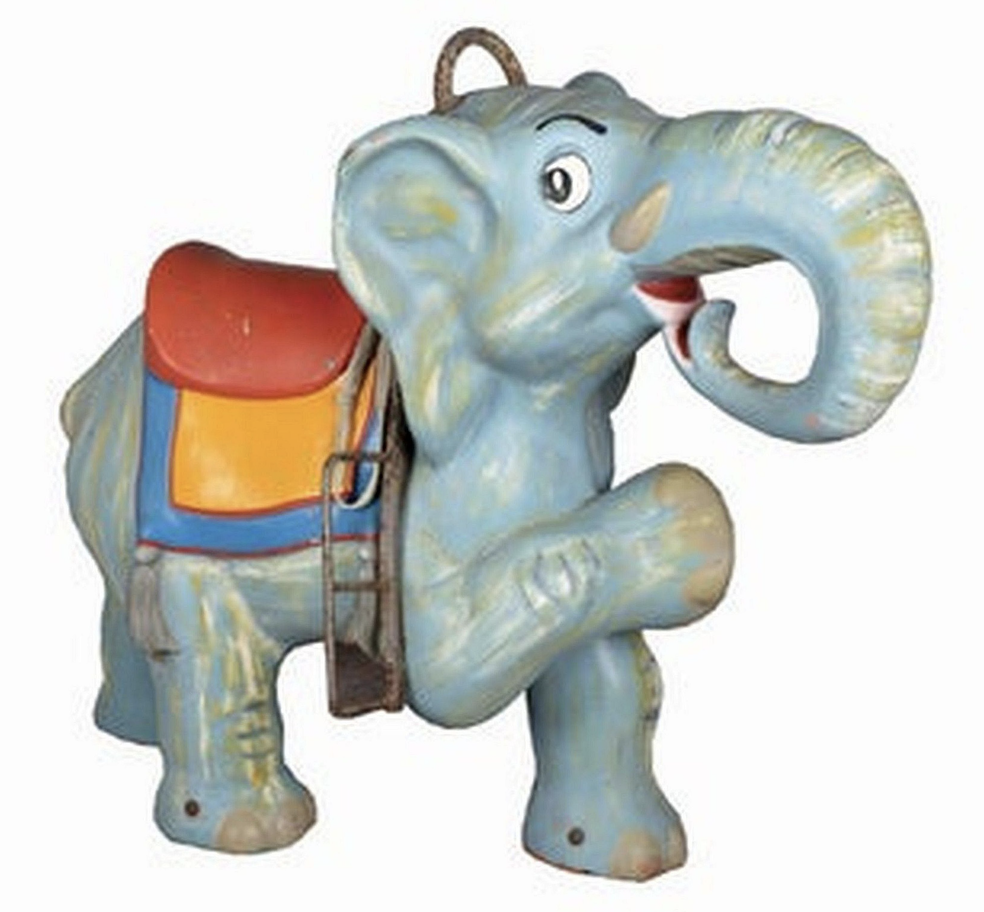 Due to extensive use and exposure to the elements, most carousel mounts were repaired and repainted every few years. Since those in original or near-original condition are very rare, those that have been restored — stripped to their natural wood, repainted with original colors, or featuring brighter “park paint” hues — are the ones most likely to reach the collector marketplace.

For those who dream of owning an entire carousel, the price is steep. In 2012, RM Sotheby’s auctioned a huge, extraordinarily ornate, custom-built example featuring a menagerie of 42 historically accurate, hand-carved animals and two chariots, along with a Wurlitzer 153 Band Organ and 10 music rolls. It realized over one million dollars. 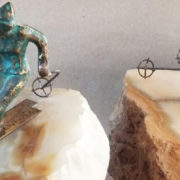 Jasper52 will conduct an Exquisite Decorative Arts online auction on Tuesday, Dec. 29. The auction consists of well over 400 lots of decorative arts to enhance any interior, from art glass to bronze sculptures. 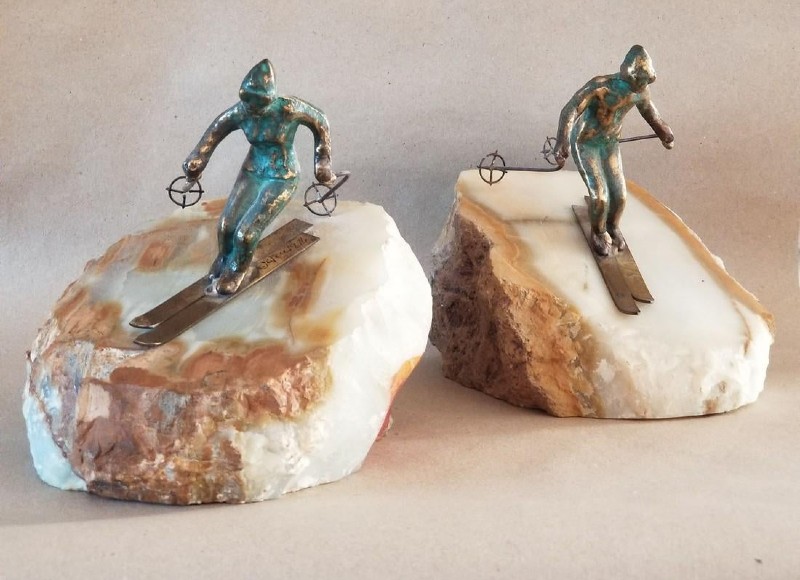 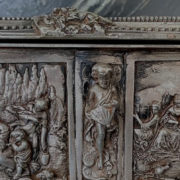 Jasper52 will conduct an Exquisite Decorative Arts online auction on Wednesday, Dec. 16. The auction consists of well over 700 lots of decorative arts to enhance any interior, from art glass to bronze sculptures. 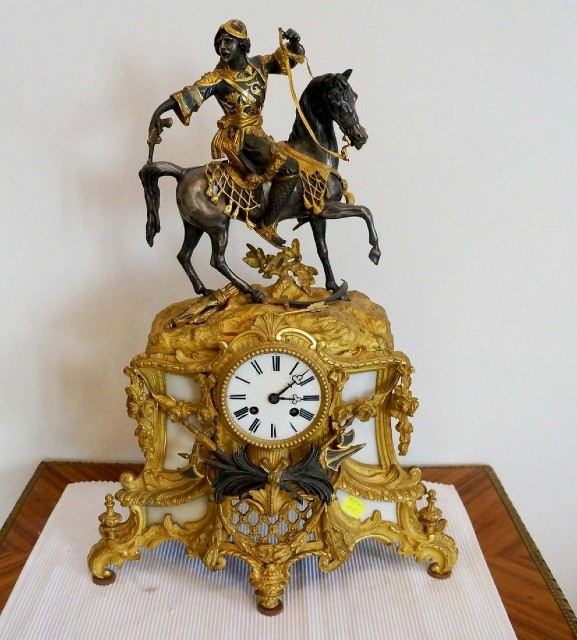 Jasper52’s latest Exquisite Decorative Arts online auction on Tuesday, Nov. 24, is composed of a diverse array of antique to modern objects. Beautiful porcelain and glass vases, impressive dinnerware and lovely bronze sculptures are among the unique treasures in this 443-lot sale. 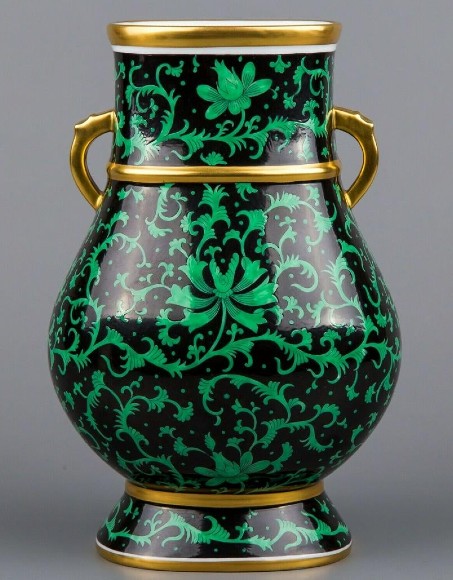 Spectacular mid-century designs for the home and pop art will go up for bid in a Jasper52 online auction on Wednesday, Nov. 18. Clean lines, organic contours and stylish functionality are all offered in this specially curated sale devoted to the sleek mid-century modern style. 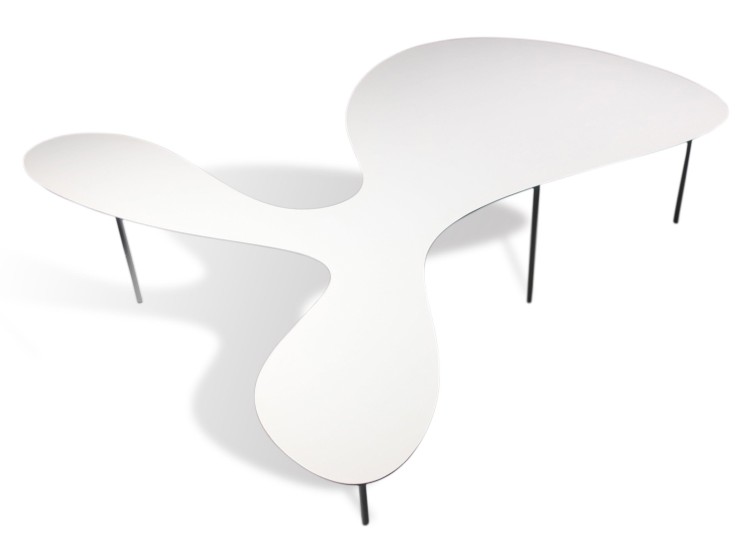 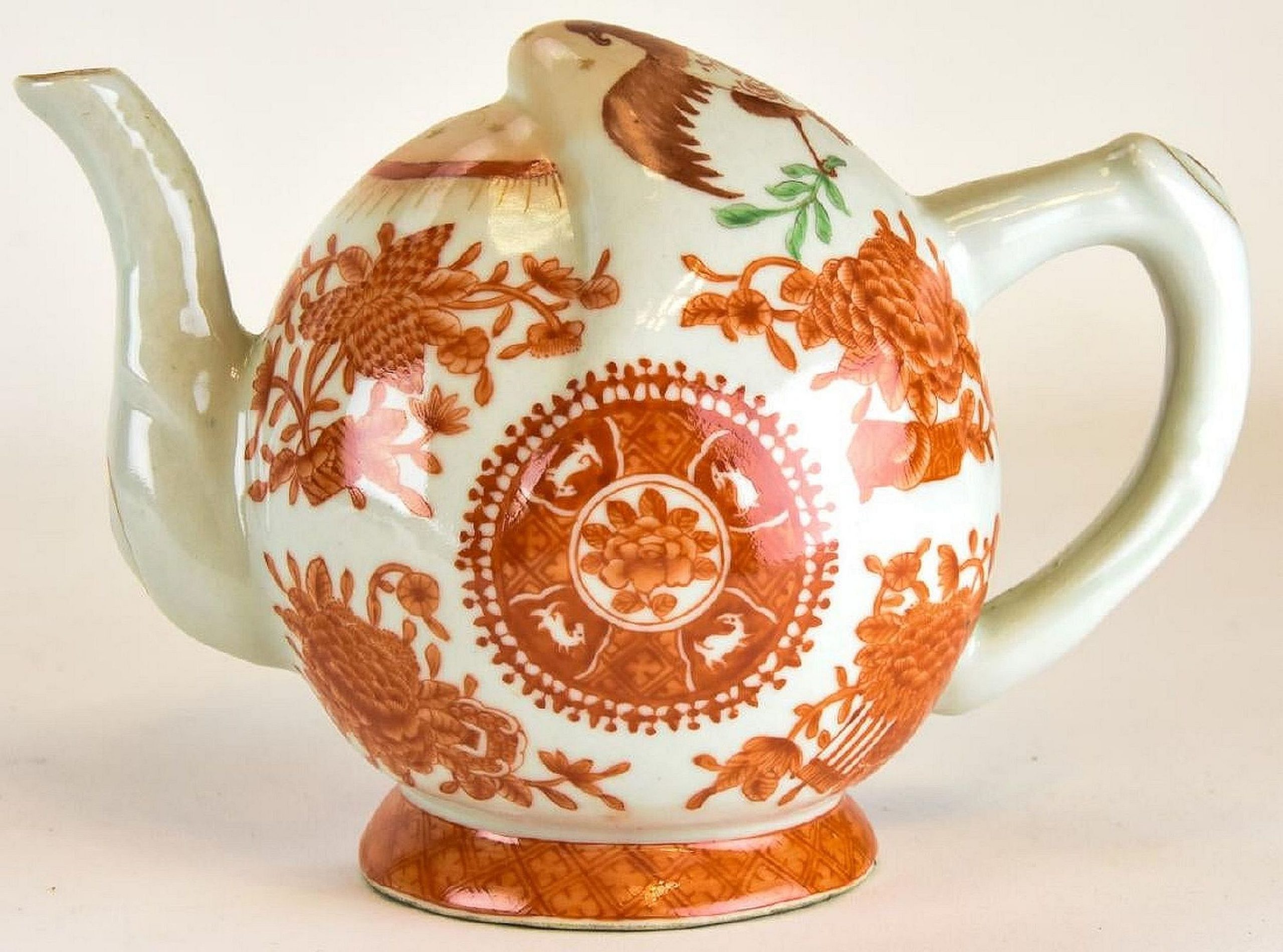 Ring-puzzles often require long wire loops to be disentangled from networks of wires, much like disentangling a mesh of delicate gold chains. Puzzle-rings, however, are bits of wire cleverly intertwined around a central pivot. Though they may seem indivisible, they separate with a simple twist. These intriguing trinkets developed from gimmels, traditional betrothing rings typically bearing clasped hands. Their challenge, explained Mechanics Magazine in 1829, “lies in disengaging the rings from the wire; and every additional ring increases the difficulty. This puzzle is of great antiquity …”

Intricately crafted Japanese wooden puzzle boxes, famed for beautiful geometric marquetry, seem entirely sealed, with no apparent points of entry. Some open with a simple secret mechanism or two. Though owners may try every trick in the book, others open only by following complex successions of shifting, sliding, inclining, rotating, pushing, pressing and/or lifting movements in precise order. 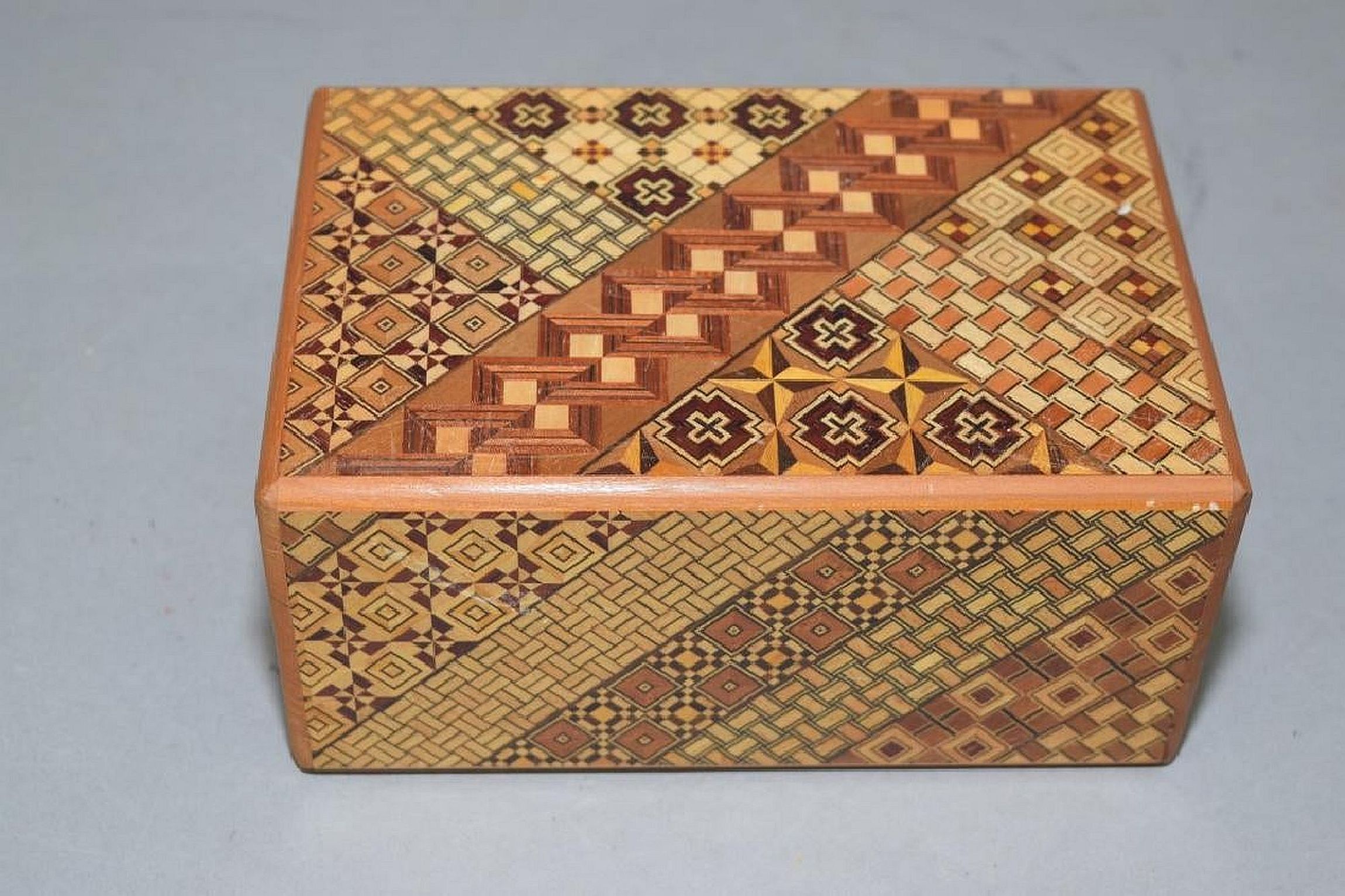 In addition to keeping secrets safe and documents free from prying eyes, a puzzle box is perfect for storing personal letters, tokens of affection or treasured trinkets. It’s also a charming way to give a gift in a gift.

These teatime conversation-starters feature functional handles and pour from spouts, yet lack lids. Inversion is the key. When hot water is poured into wide holes at their bases, it flows into funnel-like, narrowing channels. When turned upright, the liquid pools at the base of these funnels. Bottoms-up!

Pottery puzzle jugs beguiled and befuddled European imbibers through the 17th and 18th centuries. These unique tavern amusements, due to unconventional construction, hindered filling, pouring or drinking without spilling a drop. Discovering their secrets was the name of the game.

Some puzzle jugs, like Cadogan teapots, were filled bottoms-up. Some channeled liquids through hollow handles and rims before reaching their spouts. Some, featuring decorative, perforated necks, could be filled, but not emptied. Others, to drink without drenching, required stopping up one or more holes while sipping from another. Moreover, hidden holes (and increasing tipsiness) could make manipulating puzzle jugs even more demanding. Rare ones that incorporate verse into their designs are particularly charming. A 17th century one, for example, reads, “Here Gentlemen come try y skill, I’le hold a wager if you will, That you don’t drink this liquor all, without you spill or lett, some fall.” 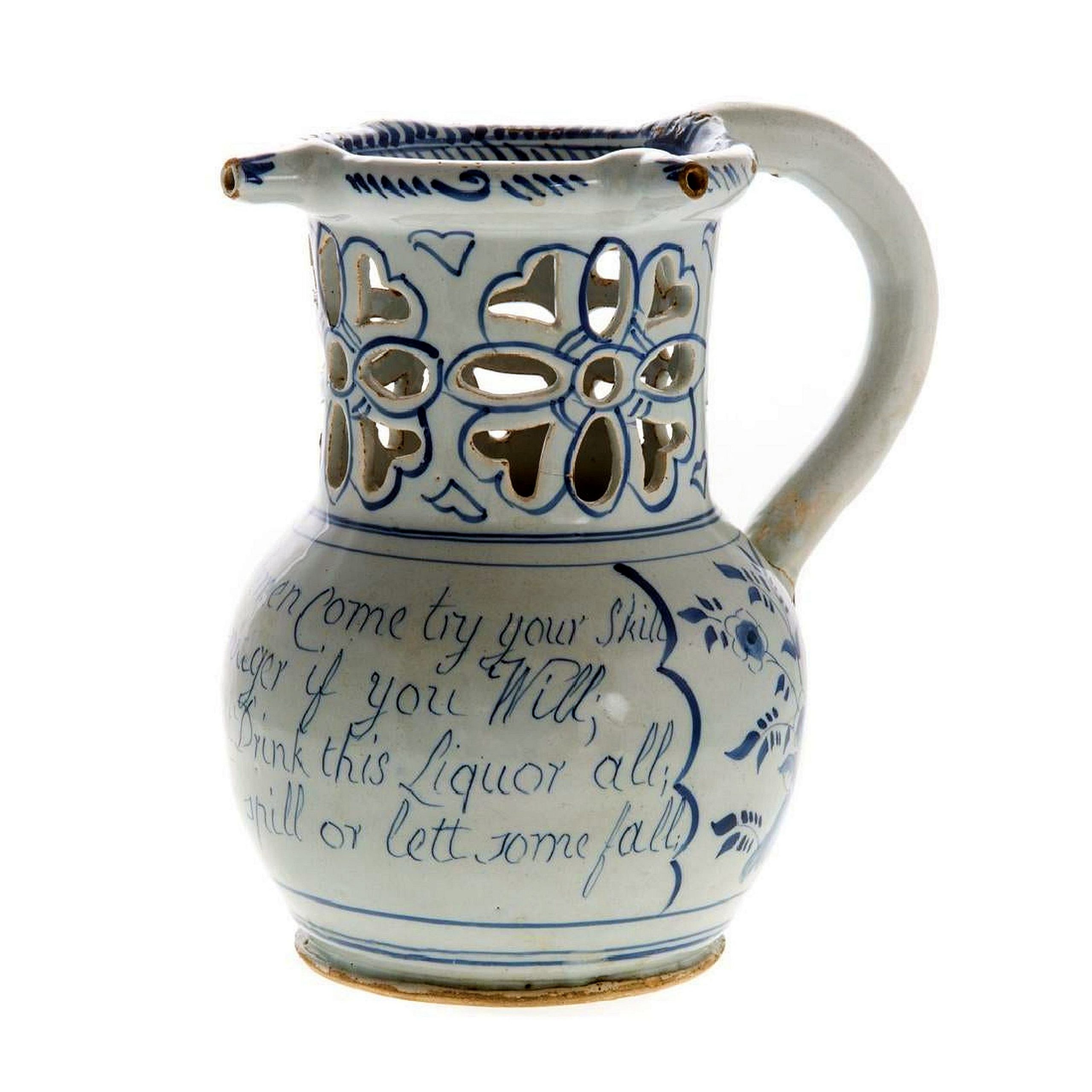 Native Americans of the Great Lakes region, believing that puffs of smoke carry thoughts and prayers to the spirit world, used ceremonial pipes during traditional tribal rituals. Those with wooden stems are often highly decorative. Some boast animal hair, dyed quillwork, beadwork, feather, brass tack or hot-file branding adornments. Some spiral from top to bottom or depict carved, low-relief figures of birds, elk, bighorn sheep, turtles, fish or buffalo. Other wooden stems, in addition to spirals and bright pigmented images, feature intricate fretwork hearts, chevrons, triangles or diamond piercings along their lengths. The puzzle is how inhaled air winds its way from pipe bowl to its smoker.

Model ships-in-bottles, which date from the mid-18th century, are well-known “impossible” mechanical puzzles. (Spoiler: though different techniques exist, their flexible, cabled masts, spars and sails are often rigged tight to hulls while outside, then raised when inside.)

On the other hand, Harry Eng (1932-1996) encapsulated full-sized books, golf balls, tennis balls, decks of cards, padlocks, packs of cigarettes, scissors, signature rope knots and/or puzzling Rubik’s cubes into narrow-necked bottles. Some surmise that he shrank, sliced, unstitched, bent, folded, rolled or disassembled them before slipping them inside. Then, with tweezers, pencils, rubber bands, mini-vises, tiny metal tubes, extreme cleverness and endless patience, perhaps he expanded, glued, stitched, straightened, unfolded, unrolled or reassembled them into their original condition. Or not. According to the Puzzle Museum website, Eng, educational consultant, schoolteacher, magician and inventor, created impossible bottles to make people think. 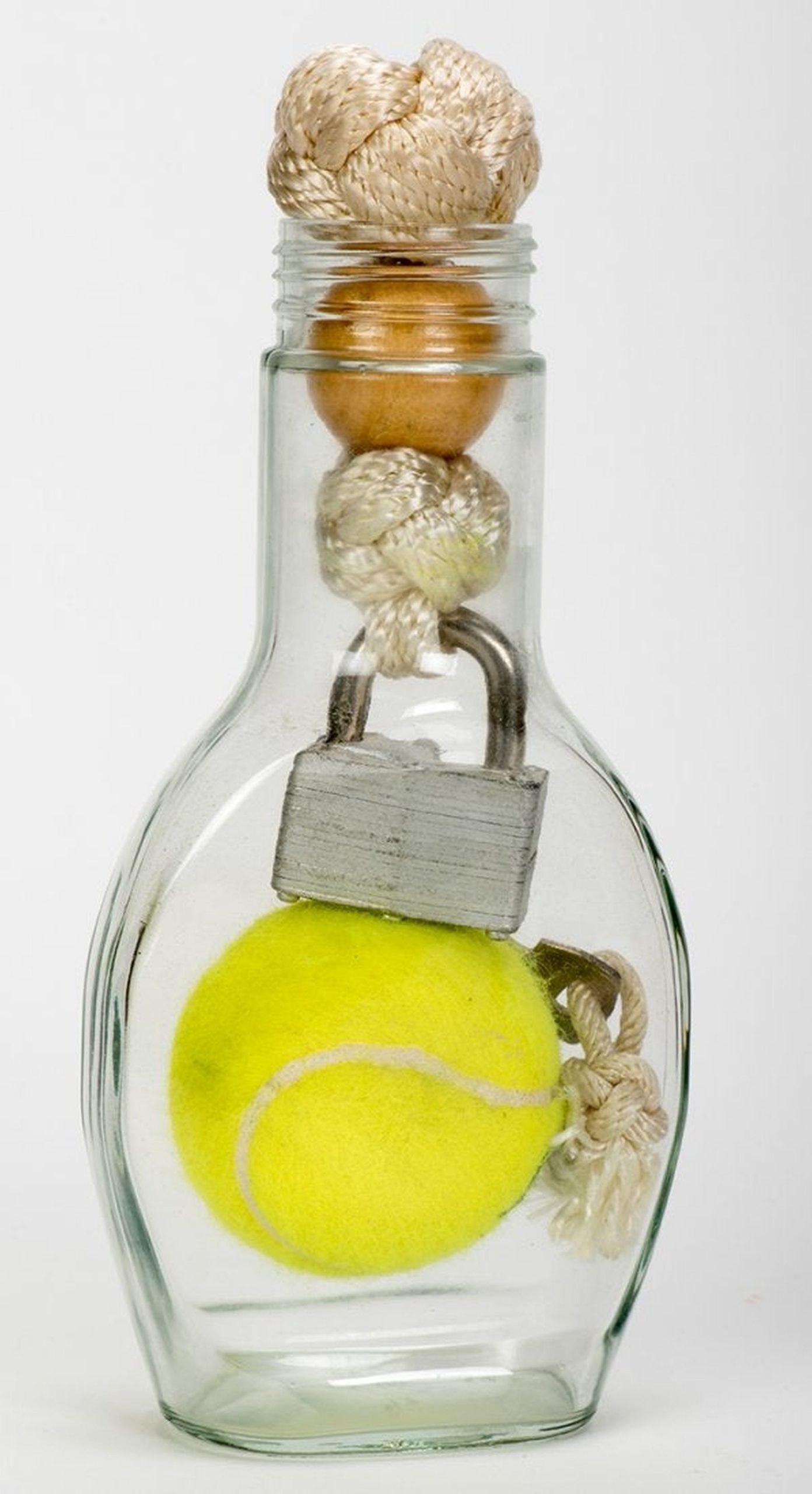 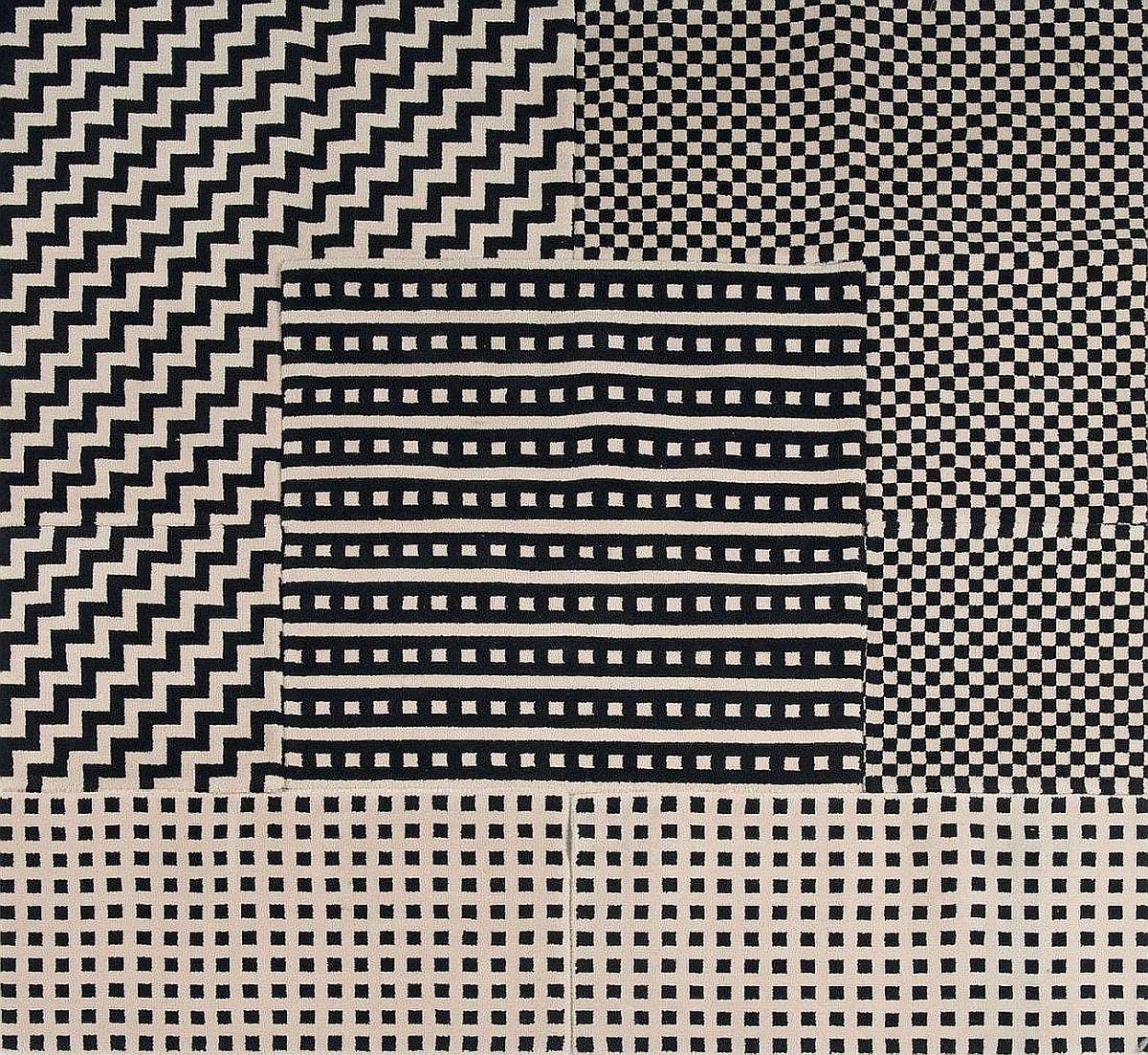 “In my usual ‘black and white’ graphic language,” he explains, “I wanted to design a carpet that is not static in its format and its visual perception, but modifiable in its shapes for the infinite combinations and the different practical spatial needs of living. Life is a puzzle!” 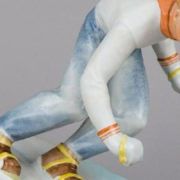 A large porcelain figurine of an Alpine skier looks like a champion in a Jasper52 auction of decorative arts on Thursday, Nov. 5. The online auction consists of more than 400 lots of sterling silver, art glass, pottery, fine art and more. 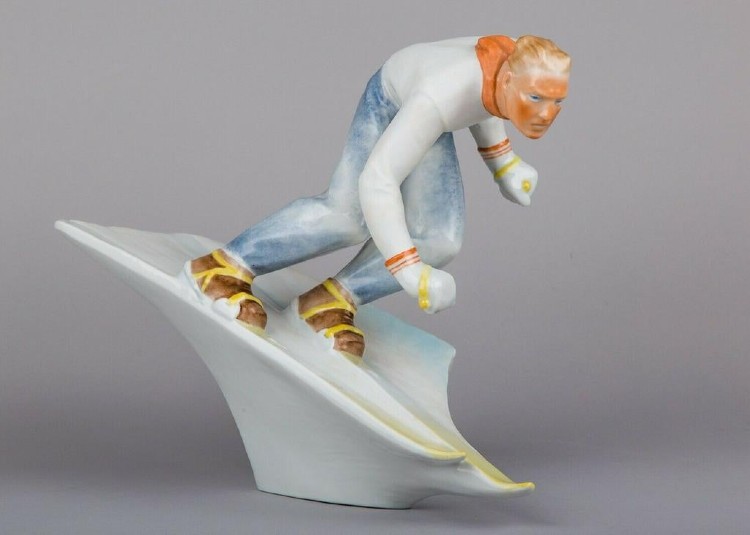 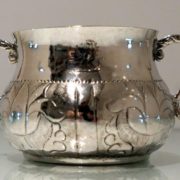 Nearly 350 lots of decorative arts, exquisite finery for the home, are offered in an online auction that will be conducted by Jasper52 on Wednesday, Oct. 28. 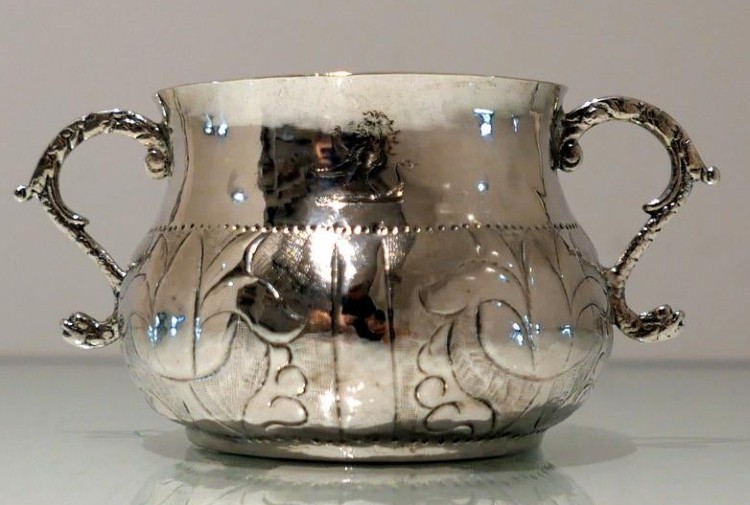