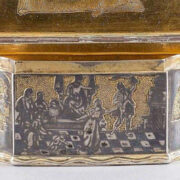 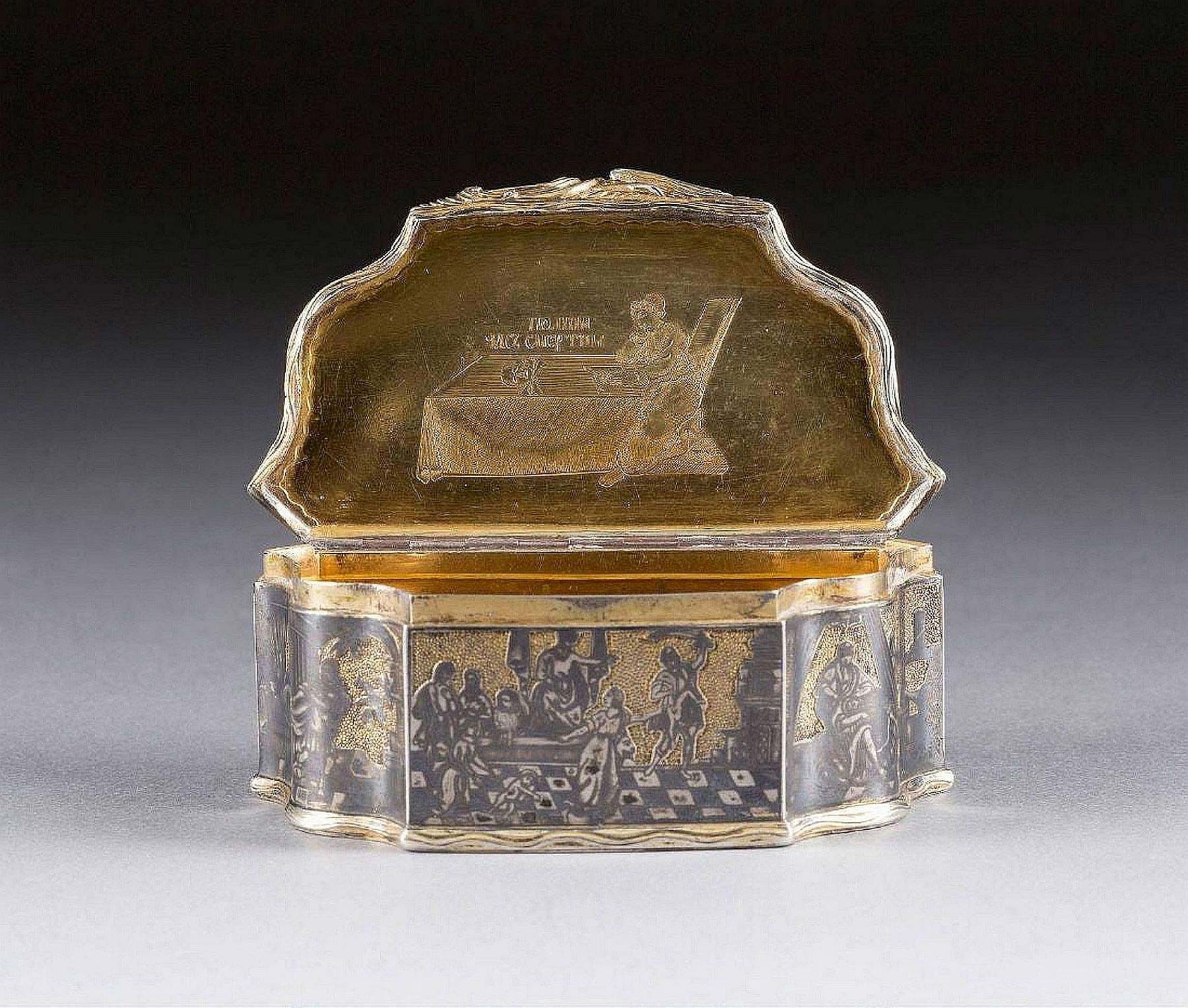 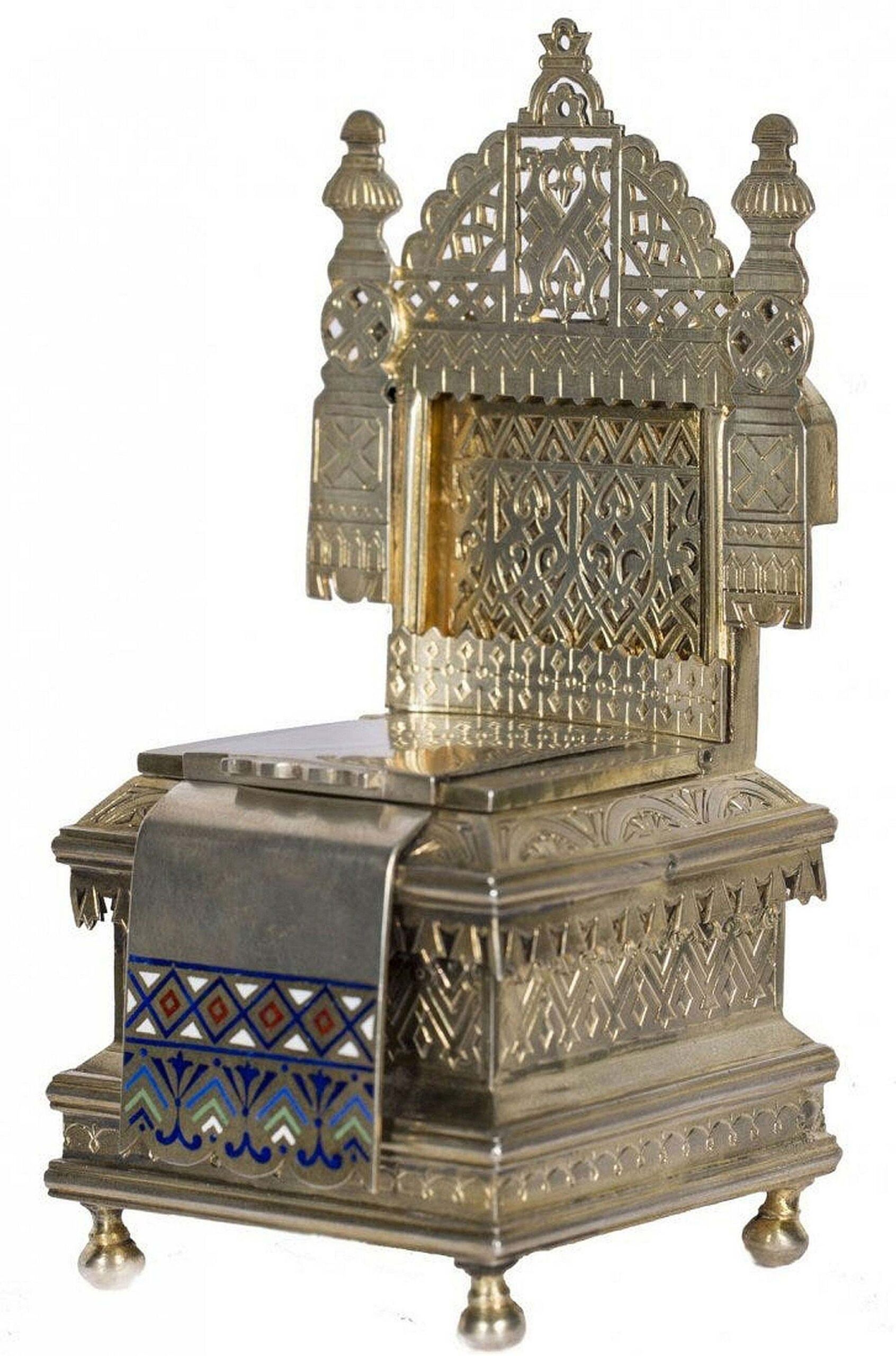 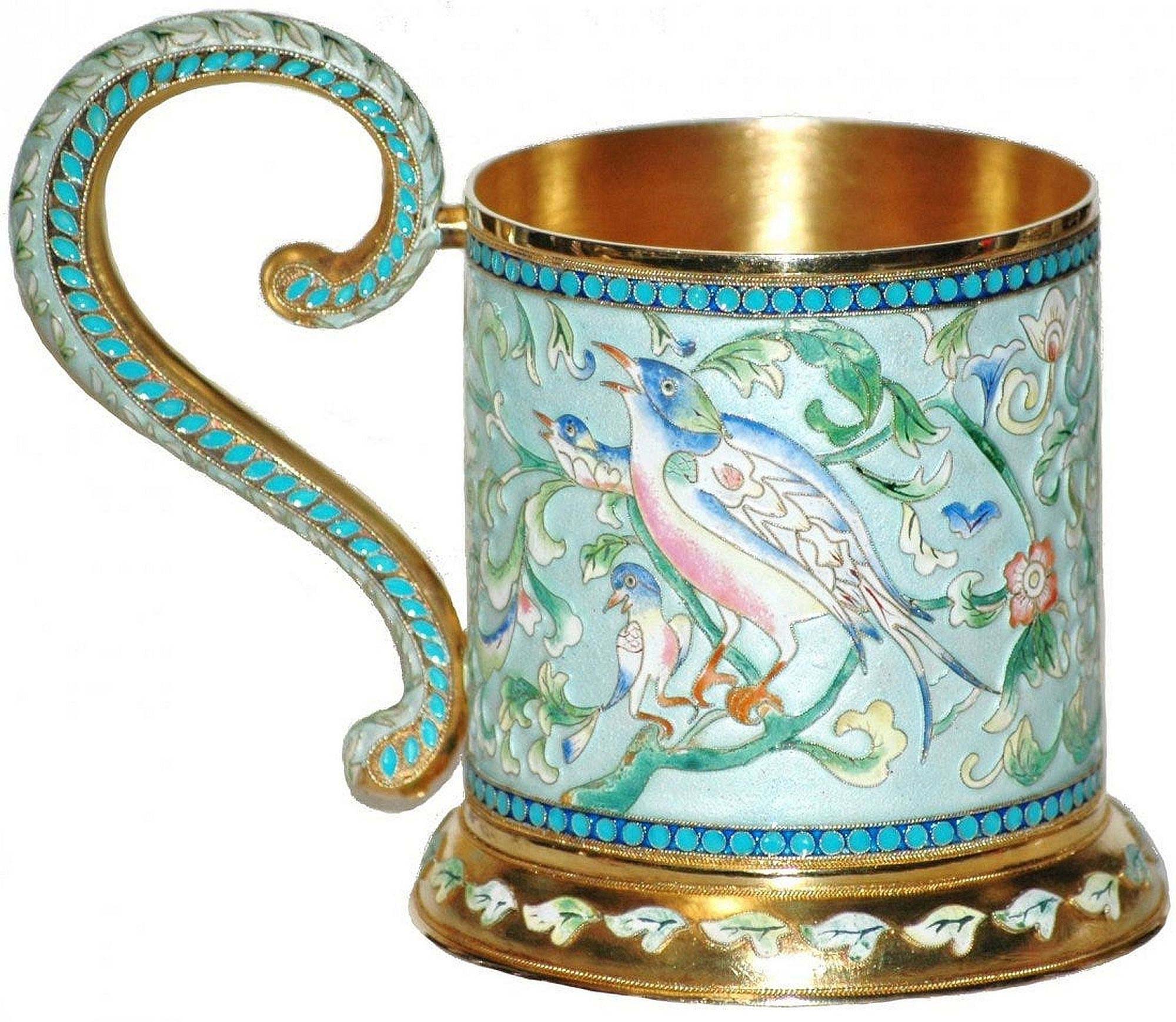 Niello solid-silver creations, many depicting Biblical scenes or architectural wonders like the Kremlin, were beloved classics. As time went by, however, bright, colorful cloisonné-enamel floral or geometric patterns came into favor and enhanced everything from picture frames, cane handles, and pipe stems to bowls, napkin rings, sugar tongs and “throne” salt cellars.

Many of these objects were further adorned with opulent gilt silver or delicate, transparent, plique-à-jour accents. Others featured bolder champlevé-enamel designs, formed by filling decorative recesses with vitreous enamel before firing. 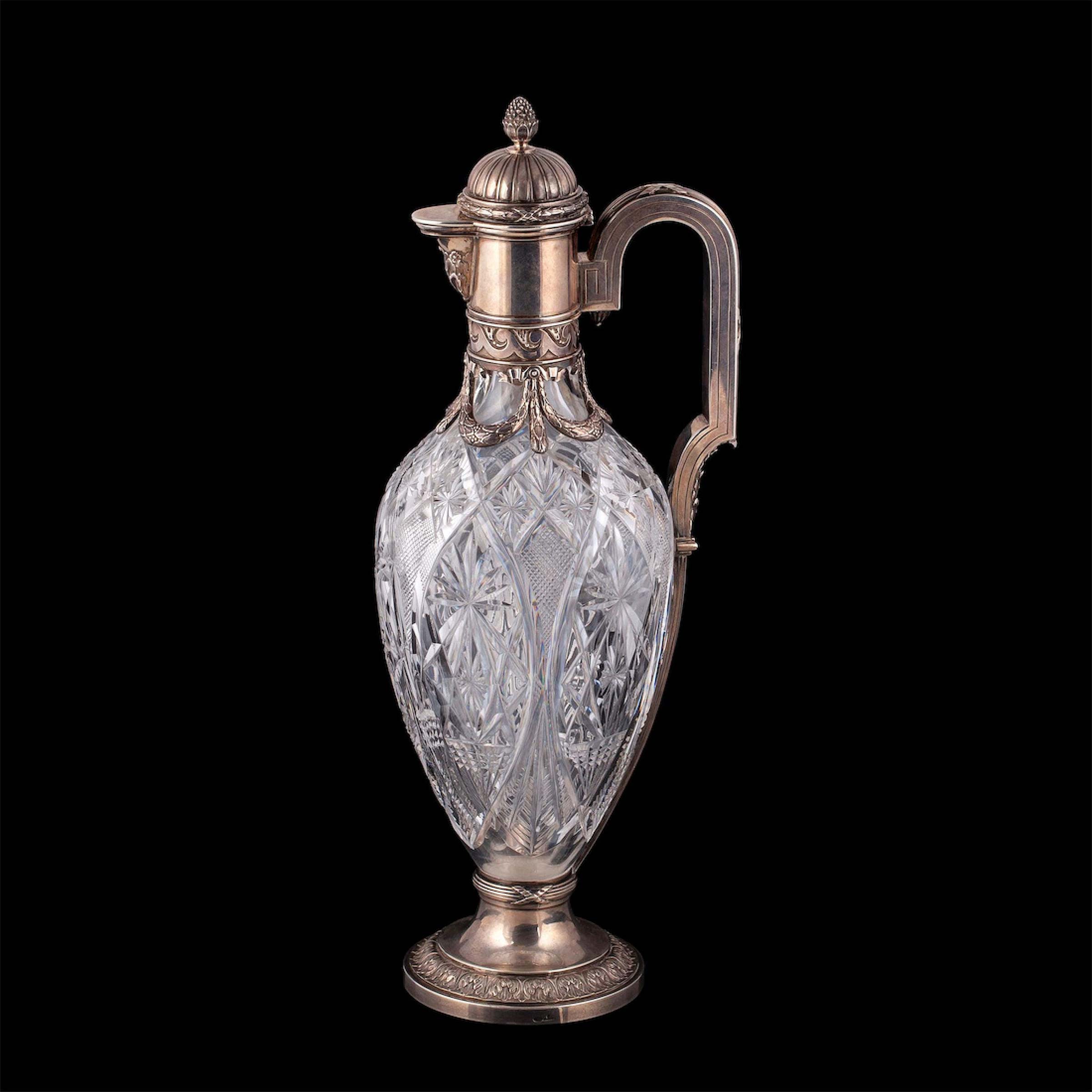 The Late Imperial Era – when Russian silversmiths like Khlebnikov, Ovchinnikov and hundreds of others designed exceptional, award-winning silver objects – was the most prolific production period of all. But it is the creations of the Karl Fabergé workshop that have attained legendary status.

“Fabergé silver has always been a synonym for opulence and finest quality,” said Alexander Pushkin, Director at Pushkin Antiques Ltd. “The combination of precious materials and supreme craftsmanship applies both to practical objects and non-utilitarian ones such as his ‘eggs,’ miniature animals and flowers. Nowadays some of Fabergé’s most famous decorative pieces, dating between 1885 and 1917, are displayed in the most important international museums. They are also avidly sought at auction and treasured by collectors. Although it’s very difficult to sum up Fabergé in a few words, what I admire most about his work is its uncompromising attention to detail and his priority to aesthetics over function.” 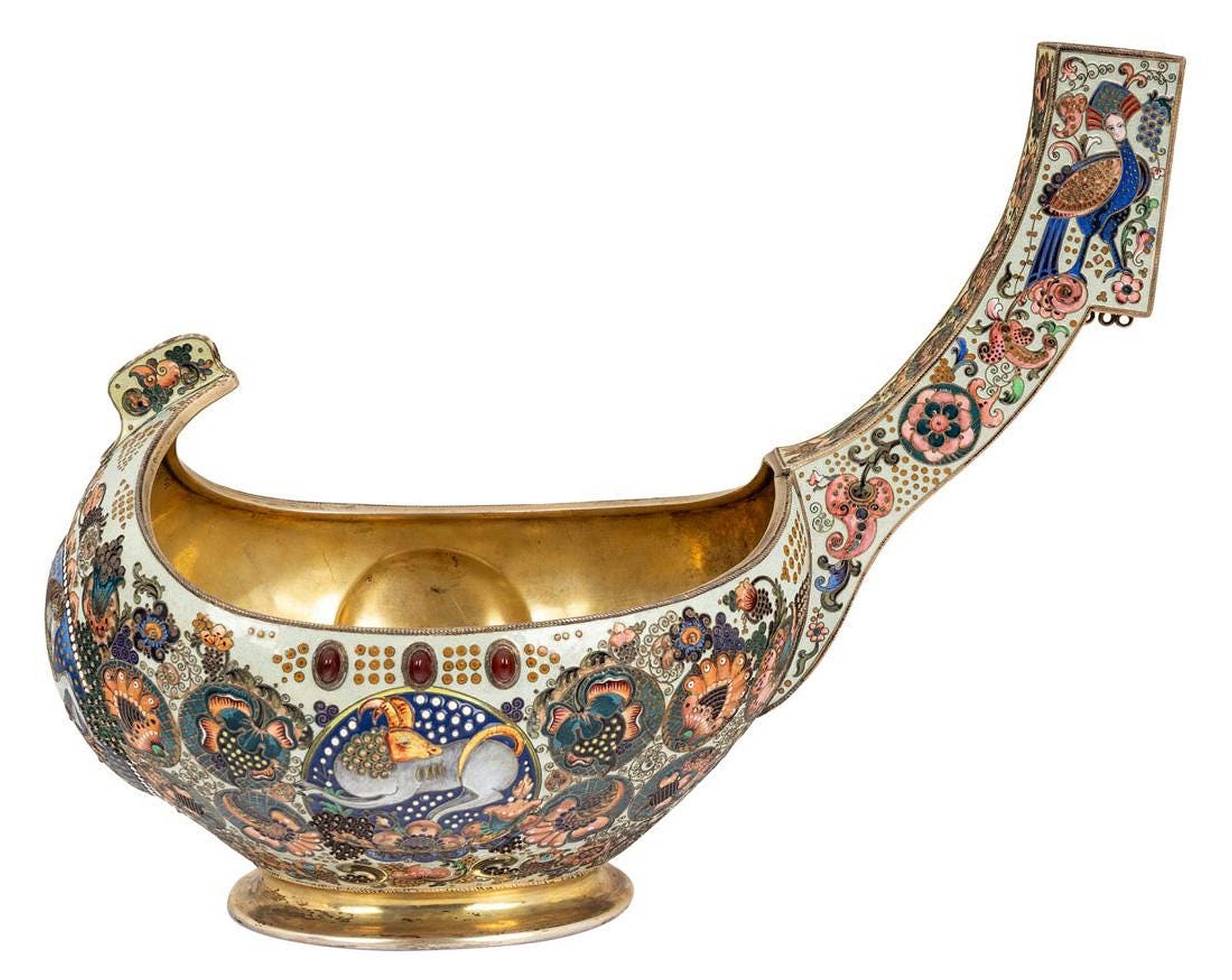 The opulent lifestyle of the Russian upper classes drew to a close during political upheavals of the early 20th century. Troves of precious silver pieces seized from silversmiths, jewelers, wealthy merchants, aristocrats and the Russian Imperial Family were melted down for coinage or indiscriminately destroyed. Some pieces were sold internationally for hard cash or smuggled West by fleeing Russian refugees. 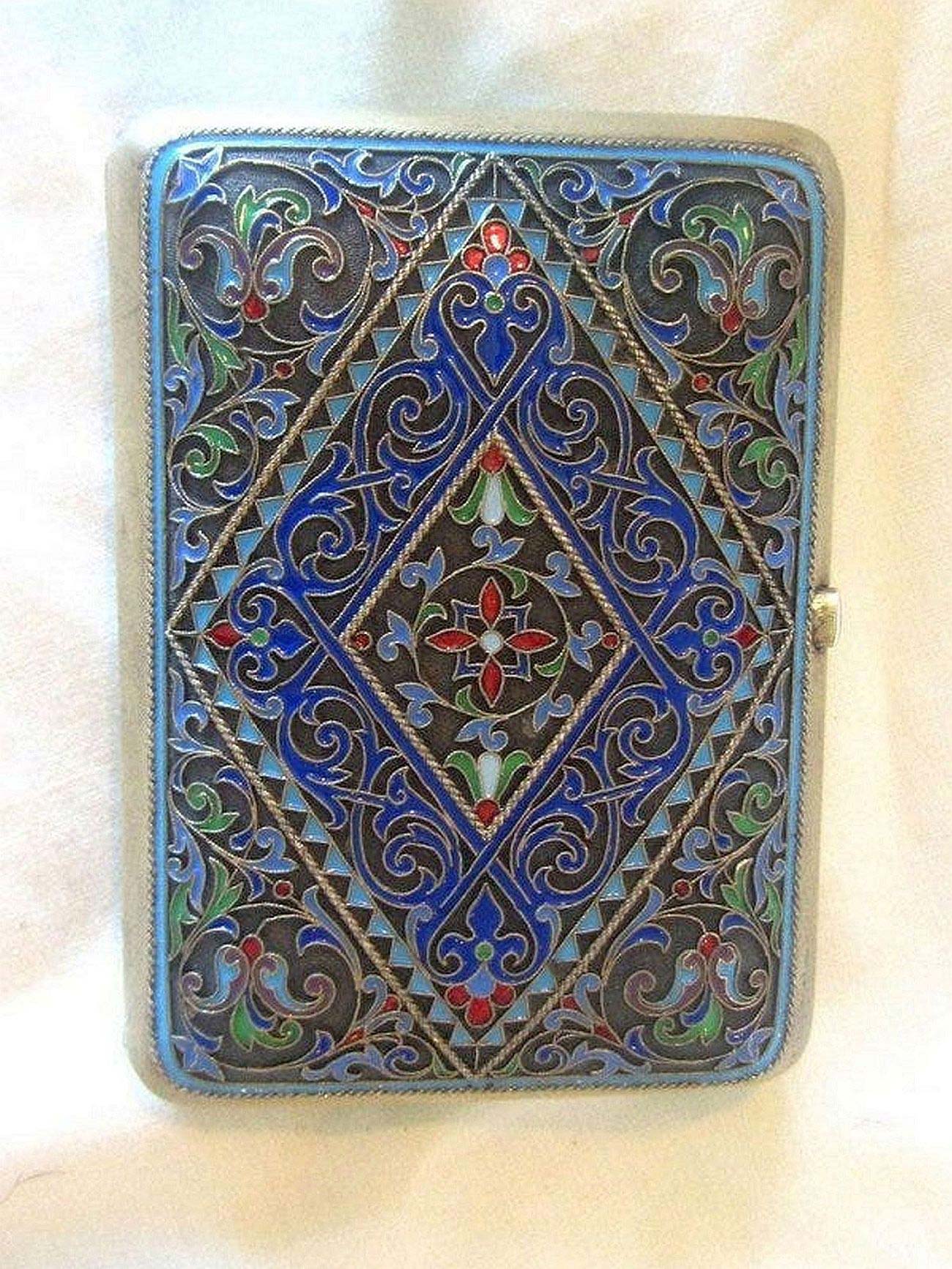 The breakup of the Soviet Union in 1991 and the subsequent rise of a wealthy oligarchy have inspired a new generation of Russian collectors spurred by growing nationalism and an interest in art history. Others seek silver as investment pieces or to give as high-status gifts to those who might extend political favors.

Pre-revolutionary silver objects that managed to survive the vicissitudes of Russian history have become extremely collectible because, as some might say, “They just don’t make them like that anymore.” 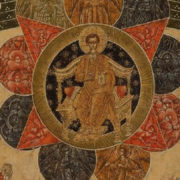 Lacquered wares – wood or metal objects decorated with coats of lacquer – date from antiquity. This opulent art, however, reached Russia in the 18th century when Peter the Great “Westernized” the country.
Over time, four great schools of Russian lacquerware arose in villages near Moscow, each developing a distinct style based on specific traditions and techniques. 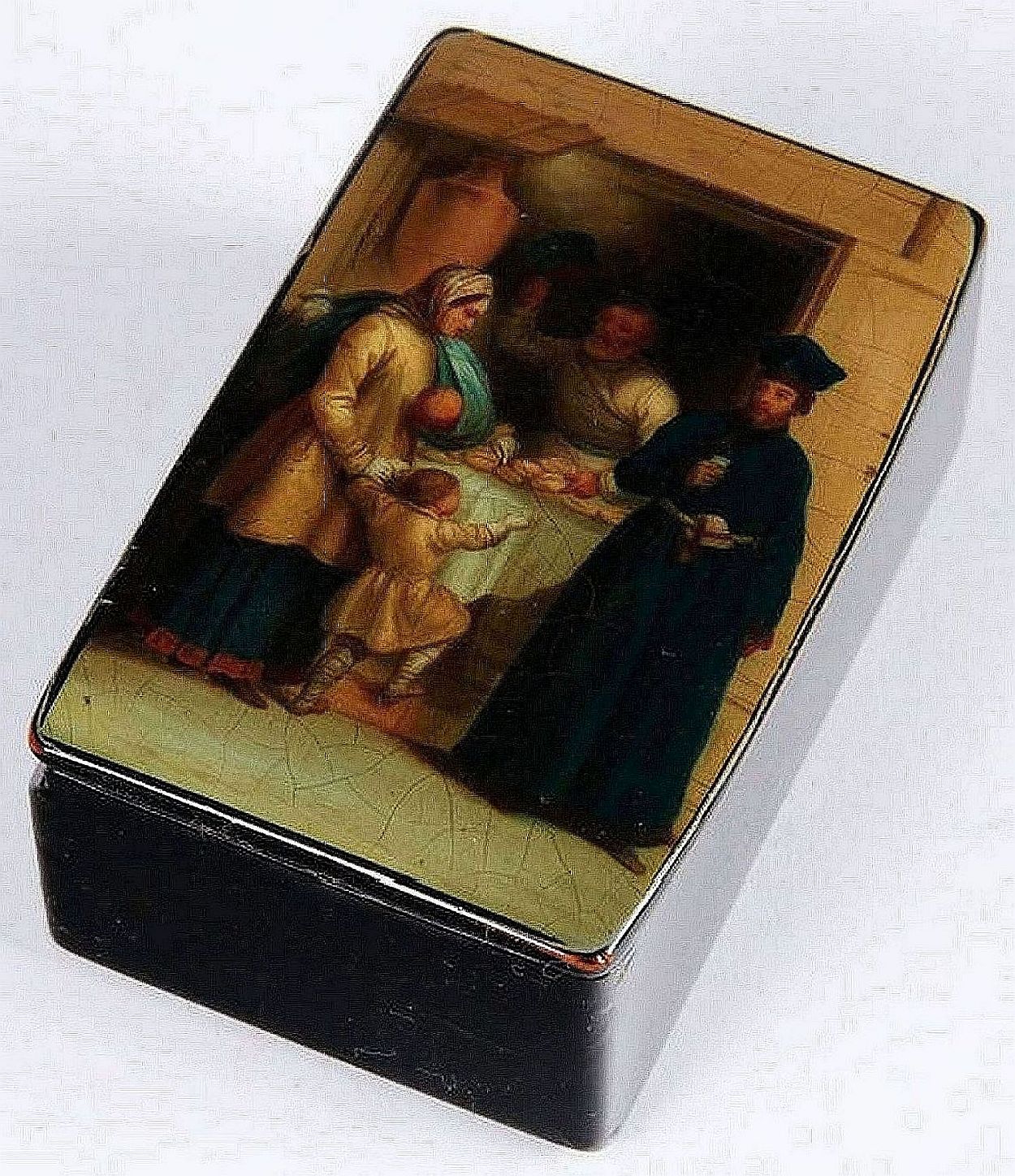 Russian lacquer snuffbox, circa 1860, its hinged lid finely painted with scene of a family at the market, the interior in faux tortoise shell. Lukutin mark beneath the Imperial Warrant. This item was acquired by the consignor from the noted exhibition, “Russian Lacquer Art From Two Centuries,” Museum For Lacquer Art, Münster, Germany, 1996. Sold for $1,200 + buyer’s premium in 2013. Images courtesy of Jackson’s Auction and LiveAuctioneers

The earliest, dating from 1795, produced lacquered, papier-mâché visors for army helmets, as well as lacquered snuffboxes. When inherited by Piotr Lukutin, this workshop also produced papier-mâché match boxes and cigar cases, typically depicting sentimental scenes of Russian life.
Preparation was extensive, generally taking an average of six weeks. Yet boiling these lightweight, handcrafted boxes in linseed oil, then oven-drying, priming, polishing, and lacquering them, made them not only durable but also impervious to water. 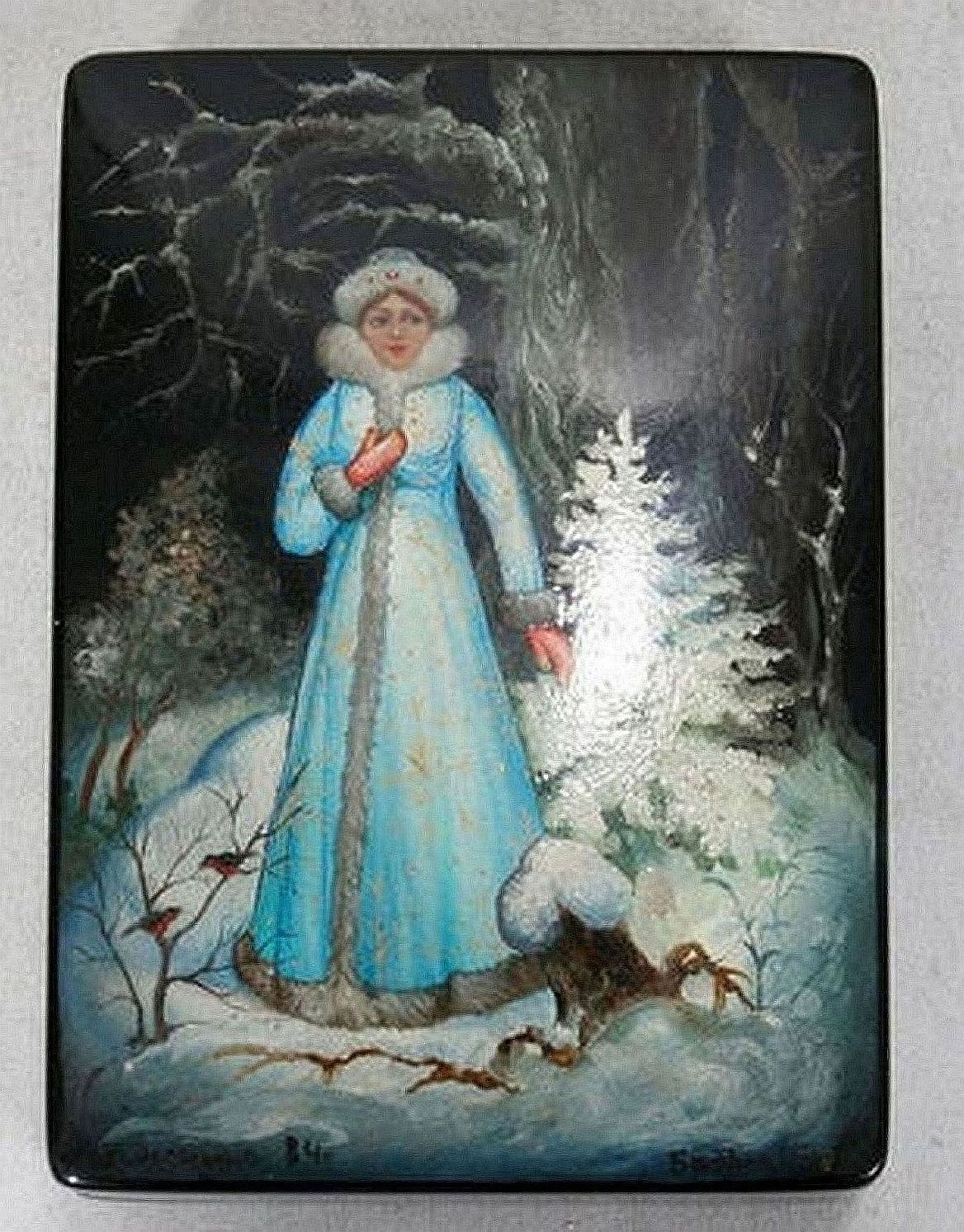 When Lukutin’s workshop closed in 1904, its craftsmen continued independently under the name of their village, Fedoskino. “Fedoskinos,” created with successive layers of thin oil paint, agleam with mother-of-pearl, metallic powders, or gold-leaf underlay, are famed for their detail, visual depth, and luminescence. Many portray realistic scenes of rustic landscapes or peasants dancing, fetching water or assembling tree-bark shoes. Others depict famous personalities, miniature reproductions of classic paintings, or favorite fairy tales, like Father Frost and the Maiden, The Frog Princess, and Ruslan and Ludmila. “Fedoskino” typically appears at the center or left lower margin of these miniatures. Artists’ signatures, rendered in complementary shades, appear to the right. 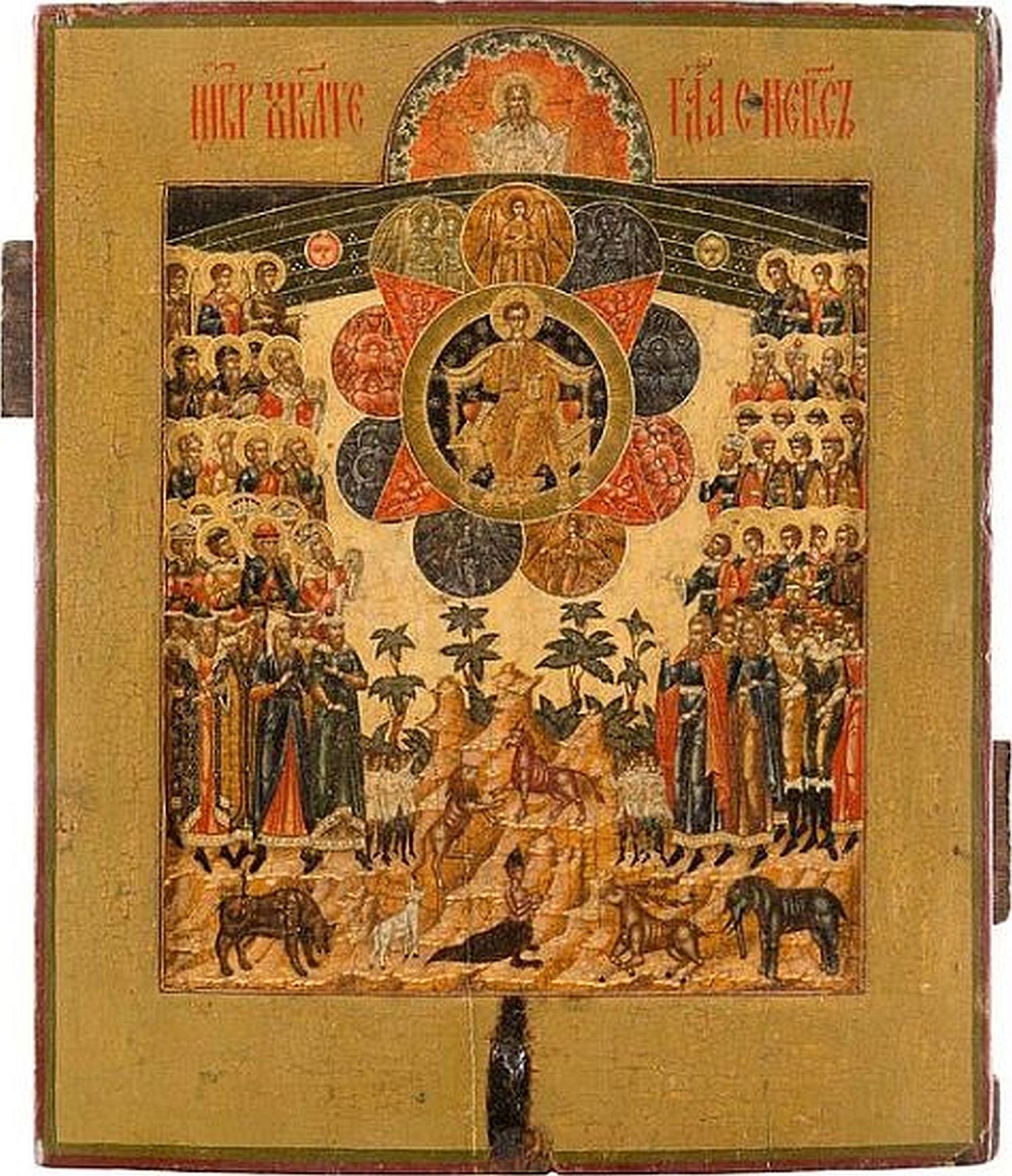 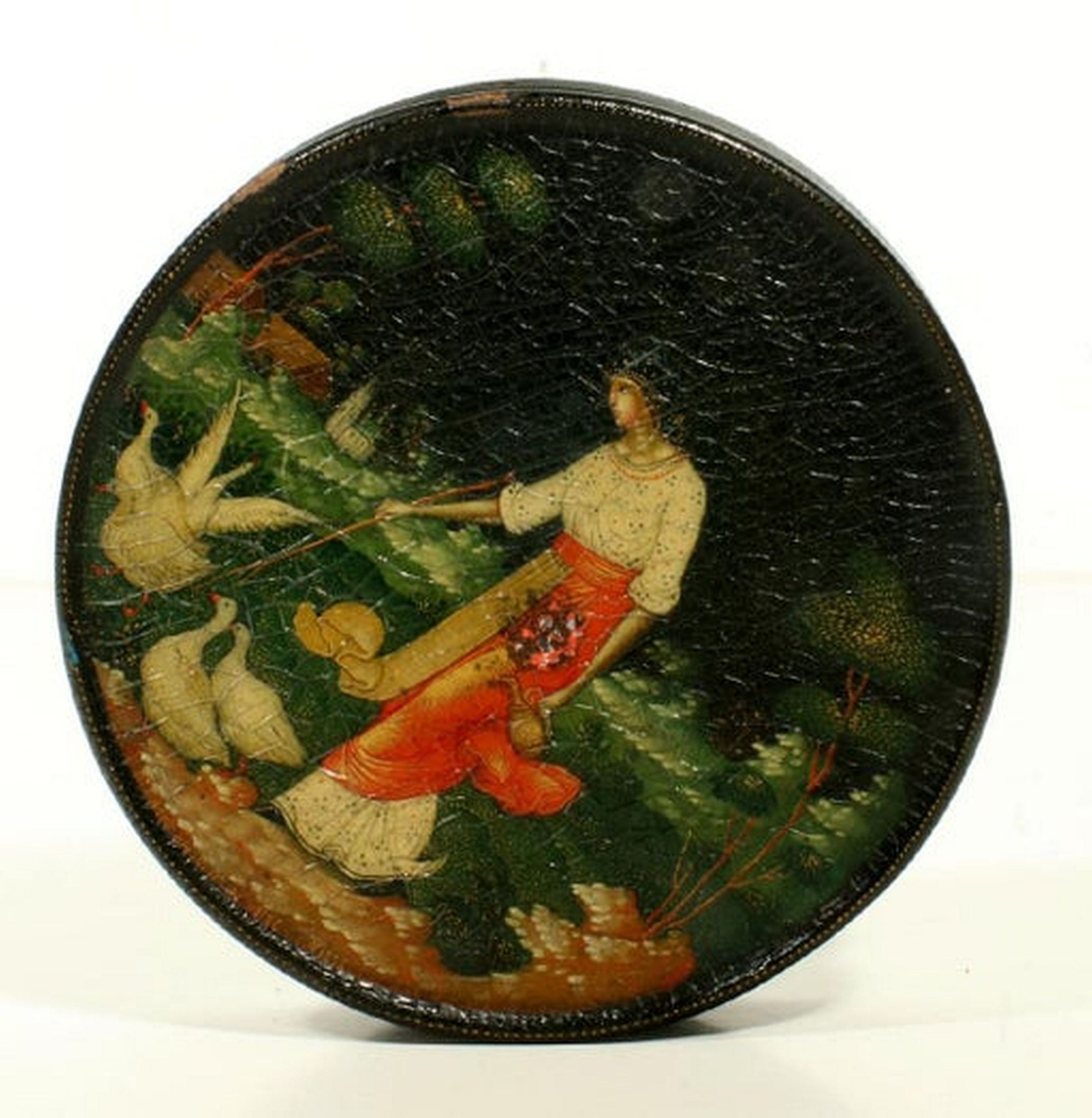 Many portray popular folk songs, legends, ballets, operas and poems with images of elongated, icon-like figures. Others feature traditional images, like fierce Cossacks atop majestic steeds, spirited “troikas,” or three-horse teams, pulling sledges through the snow; or unfolding folk narratives like “The Tale of the Humpback Pony.” More contemporary Palekhs depict dramatic scenes of Soviet life , the USSR emblem or portraits of Joseph Stalin. Many are signed in fine gold script. 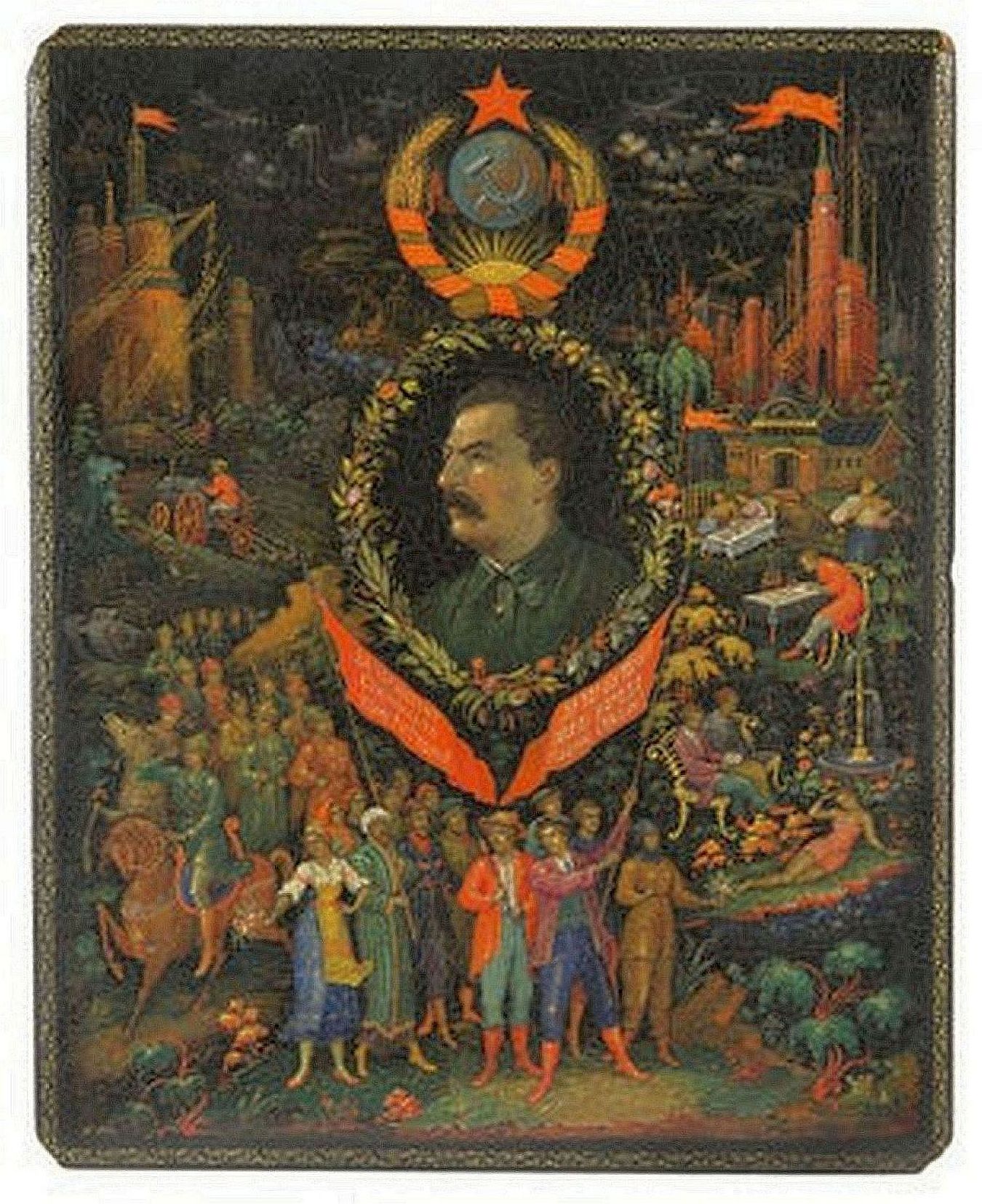 Some describe Palekh miniatures as “small miracles,” owing to their fine workmanship and illustrious lineage.
Craftsmen in nearby Kholui also originally made icons before venturing into lacquer boxes. While their boxes feature egg-based tempera images embellished with gold-leaf highlight, their designs are more realistic, less nuanced, and bolder. In addition, “Kholui” palettes feature employ reds, yellows, browns, and orange against bright, dramatic, swirled backgrounds.
Kholui lacquer boxes often depict ancient cathedrals, churches, convents, monasteries, or the architectural glories of historical cities like Suzdal or Yaroslavl. Many, celebrating the joys of nature, depict local landscapes, like the springtime floods along Kholui’s picturesque river, the Teza. Some are more fanciful and portray sweeping oral epic poems or beloved fairy tales like “Seven Semeons” or “Scarlet Flower.” Others depict traditional Russian customs, like greeting guests with loaves of bread and loaves of salt. 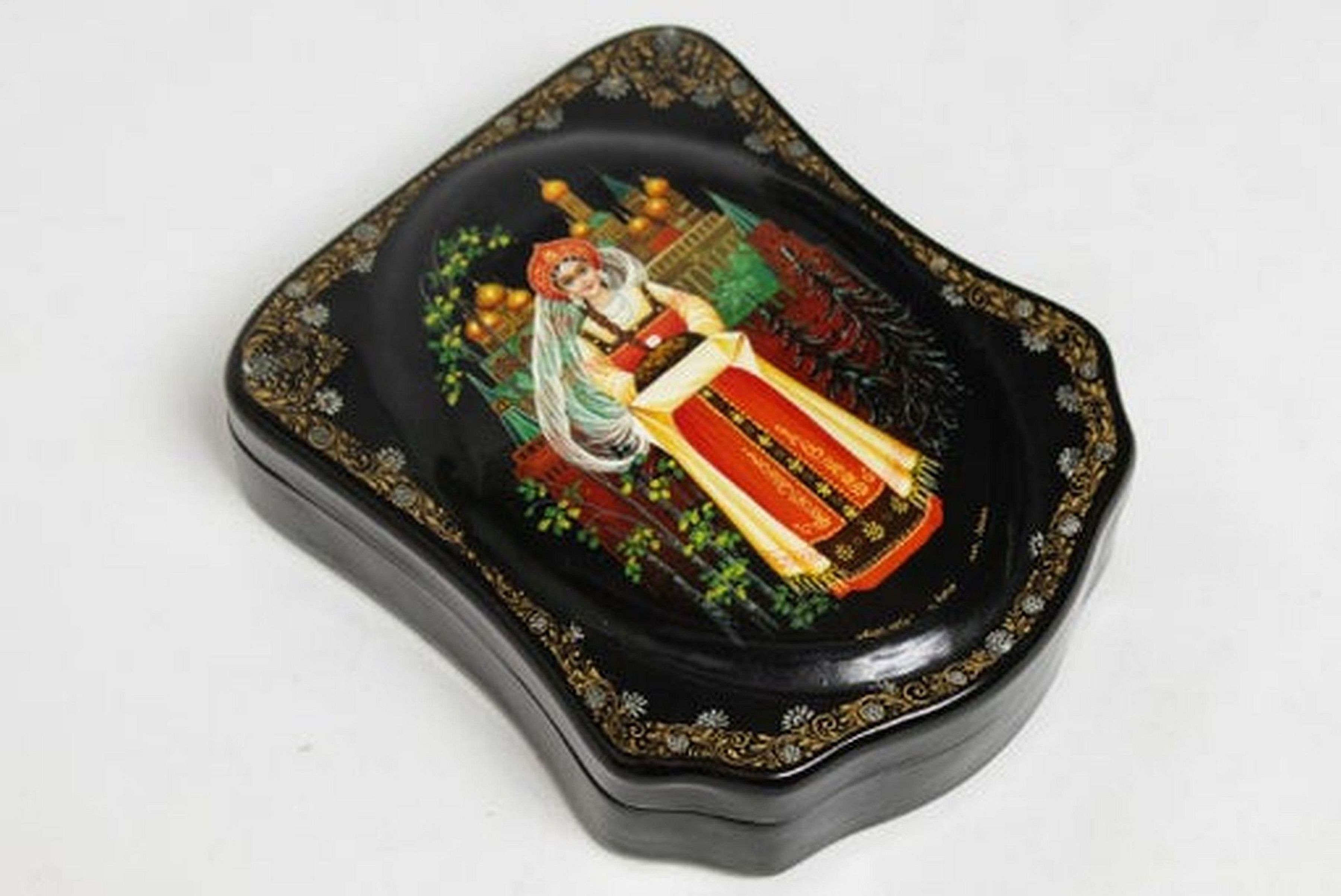 Russian hand-painted lacquer box, “Bread & Salt,” depicting a woman in kokoshnik [traditional Russian headdress] offering traditional welcome of loaf of bread and cup of salt. Made in Kholui, artist-signed and dated “Rozova 2012.” Image courtesy of Auctions at Showplace and LiveAuctioneers

Mystera was once an icon-making village, too. But unlike Fedoskino, Kholui, and Palekh boxes, their designs were decorated only the lids. Some are edged in lacy gold or silver and depict fine, floral bouquets. Others portray villages, fields, or forests (replete with faraway blue and lilac-hued hills and dales), romantically melting into pale, egg-based tempera pink, blue, gold, or ivory backgrounds.
Other “Mysteras” depict seasonal fairs, festivities, or traditional Russian activities like mushroom or berry-picking. More dynamic examples commemorate historic events or heroic battles. Others feature colorful fantasies inspired by Russian songs, legends, fairy tales, and literary works like Pushkin’s “Tale of the Golden Cockerel” and “The Snow Queen” by Hans Christian Andersen.
Antique Russian lacquer boxes are prized not only for their beauty and exquisite craftsmanship but also for the passion and national pride their images evoke. Because each box is a handmade artwork, collecting opportunities are endless, and the potential discovery of a new addition to one’s collection is always just around the corner.

Fabergé’s miniature pendant eggs are an exceedingly enjoyable area to collect. In what other area can you purchase a Fabergé egg that you can also wear everyday?

Perhaps no country is better known for its Easter eggs than Russia. From the jeweled creations of Fabergé to humble woodcarvings, the holiday could not be celebrated without the decoration and exchange of numerous eggs. With the tradition dating back to the 15th century, by the 1890s wealthy families presented each other with precious miniature eggs each year. Eggs could be decorated with symbols of the season, family professions, or love tokens. Strung on gold necklaces, a lady might have multiple necklaces by her later years.

Jeweled pendant eggs can range from affordable to quite expensive, so where should a novice collector begin? Read on for 5 key tips to beginning your Fabergé pendant egg collection.

1. It’s important to begin with an established and trustworthy seller who is willing to guarantee authenticity. 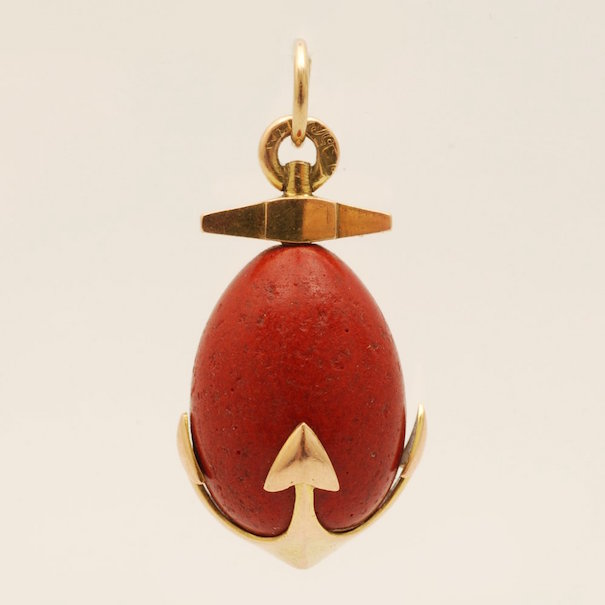 2. Consider the materials you prefer: the translucent guilloché enamels for which Fabergé is famed or a more unusual material like the matte purpurine, a rare and unusual glass that is so opaque it resembles a carved hardstone. Do you want an egg with an elephant or clover, symbols of good luck, or perhaps your birthstone? Eggs are available in every style and color, and designs can be surprisingly modern. 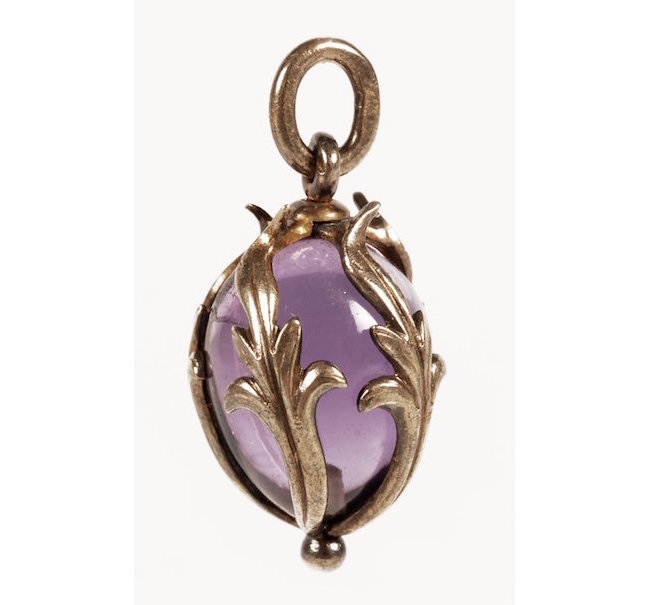 3. Examine the egg or photos of the egg carefully. It should show some signs of wear. When strung together on a necklace, the eggs often bumped into one another and tiny chips or bumps can appear on enamel surfaces. Large areas of loss and repair negatively impact price while an important provenance will increase it. The Red Cross egg (featured below) has a small area of discoloration that is fairly common with enameled eggs, and the estimate reflects the tiny bit of wear as well as the desirability of the subject matter. 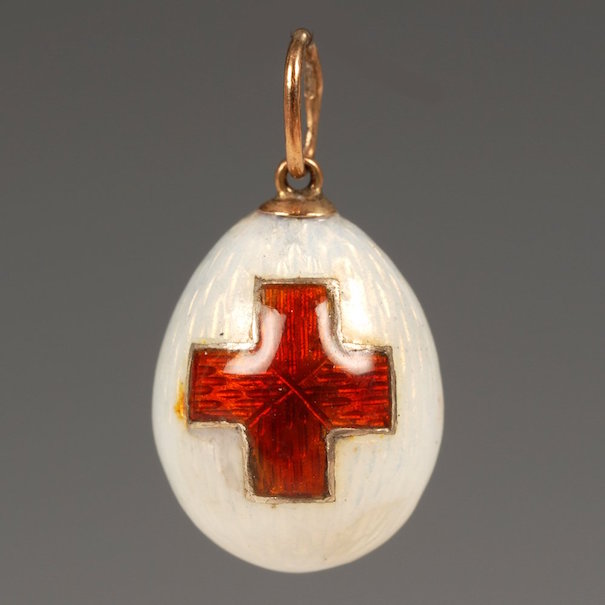 4. Spend a little time familiarizing yourself with Russian hallmarks. Pendant eggs are mostly constructed on a frame of gold and are marked on the bale, the small suspension ring from which they can be attached to a necklace or bracelet. The bale is a small space for the relatively large maker’s marks and hallmarks, especially if we compare them to the diminutive marks used in France! Russian jewelers stamped items with the numbers 56 (equivalent to 14K) or 72 (equivalent to 18K). 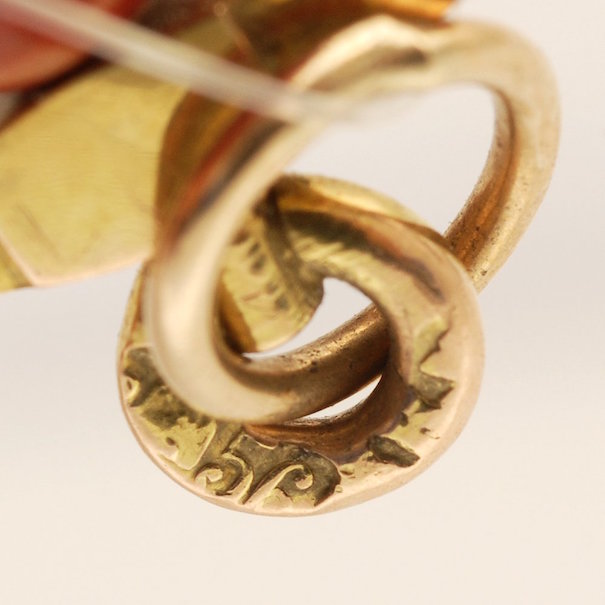 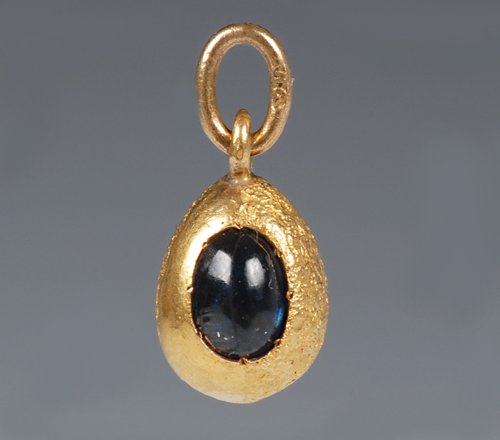