Artist, sculptor, filmmaker, magazine publisher, photographer, dance club owner, author, graphic designer. For a person to excel in any one of these endeavors during a lifetime would be quite enough for most people, but in his relatively short 58 years of life, Andy Warhol excelled at all of them. In so doing, he left an indelible imprint on American popular culture.

Born in 1928, Andy Warhola grew up in a work-class neighborhood in Pittsburgh, PA. He was the youngest of three children born to Slovakian immigrants Ondrei (Andrej) Warhola and Julia Zavackys. Early in his life he suffered from a neurological disorder. During his years of illness, Warhol became enamored by celebrity and also developed a fascination for the creative design of comic books. Because his illness limited his physical activity, young Andy spent much of his time perusing magazines about celebrities and immersing himself in the adventures of comic book characters. This influence would later evidence itself both in his art and his own lifestyle. Over time he would emerge as a central figure among New York’s headline-makers and party people.

One of Warhol’s best-known series of celebrity artworks is his “Early Colored Liz” series. At the time Warhol created the series in 1963, Elizabeth Taylor was one of, if not the, most talked-about stars of the day. Her love life and high-profile roles in major motion pictures put her front and center of the magazines Warhol read with regularity. According to the book Andy Warhol: A Retrospective, the artist’s “Liz” series was based on an MGM publicity photo of Taylor issued in the late 1950s. The method he used in producing the Liz series – silk-screening – was repeated later on with his Marilyn Monroe artworks and continued to be used through the early 1980s. 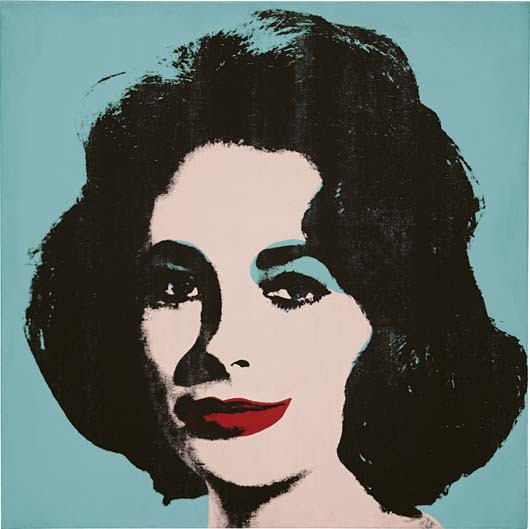 Early in his life, Warhol’s educational aspirations took him to study at the Carnegie Institute of Technology (later renamed to Carnegie Mellon University), where he earned a degree in Pictorial Design in 1949. In short order, he began working on projects for the likes of Glamour magazine, NBC, Tiffany & Co., Columbia Records, Harper’s Bazaar, and others. During this time, his eye for design and his creative chops were viewed by thousands of people daily, although they likely never knew it. Warhol was creating window displays of Bonwit Teller and I. Miller department stores.

Of his professional years, the period from the 1960s through early 1970s was perhaps the most productive and high profile for Warhol. Among the works created and unveiled during this time were his “Campbell Soup Cans” series, and his celebrity portrait series (Taylor, Monroe, Elvis Presley, Liza Minelli, Debbie Harry, Michael Jackson, et al.), and the “Death and Disasters” series showcasing images of tragic events and accidents as depicted in newspapers. Warhol silk-screened the images onto canvas using a repetitive process that incorporated reflective silver paint. 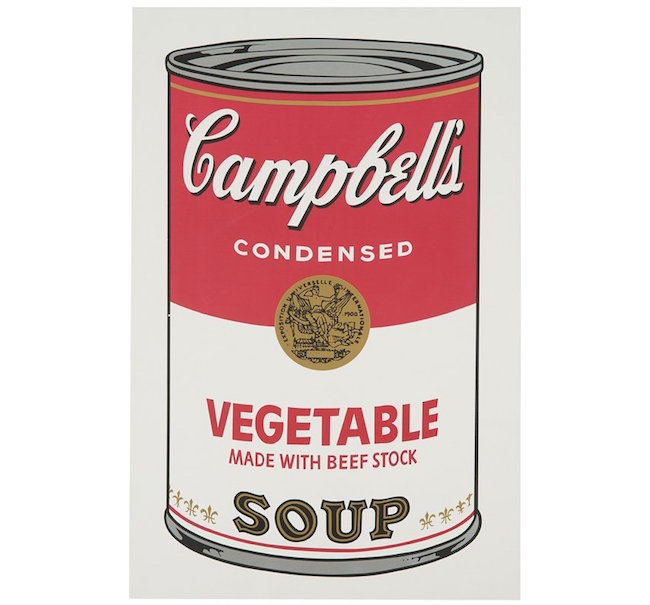 The decade of the 1960s also saw the emergence of Warhol’s filmmaking and sculpting ambitions. It’s reported that Warhol produced around 600 films, with the majority being shorts; with the exception of **** (also known as Four Stars), which was a 25-hour long film. Through sculpture, Warhol transformed everyday items into three-dimensional pop art. In 1964, he presented hundreds of pieces replicating product boxes of familiar brands, including Heinz, Del Monte, Kellogg’s and Brillo. This series also pays homage to the early 20th-century artistry of Marcel Duchamp. 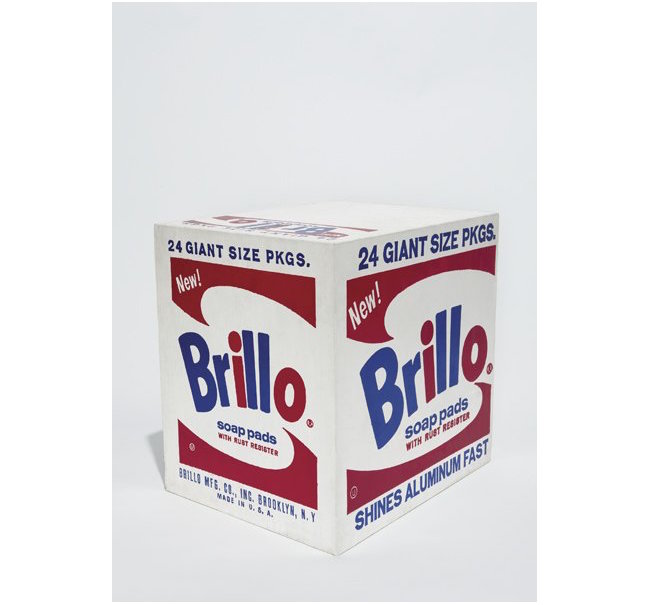 Warhol continued to evolve, adding performance art and album-cover illustration (the Rolling Stones, Velvet Underground) to his pop-art arsenal. The end of the 1960s also saw Warhol suffer personal tragedy when a woman who acted in his 1967 film I, a Man shot Warhol in the chest. He survived the near-fatal attack and remained an influential, groundbreaking artist for another 20 years. He became friends with countless celebrities and, ironically, became even more famous than many of the A-listers who were regulars in his crowd. He was a regular at New York’s fabled Studio 54 disco and once created a distinctive sculpture decorated with cutout dollar signs as a birthday gift to the nightclub’s co-owner Steve Rubell. 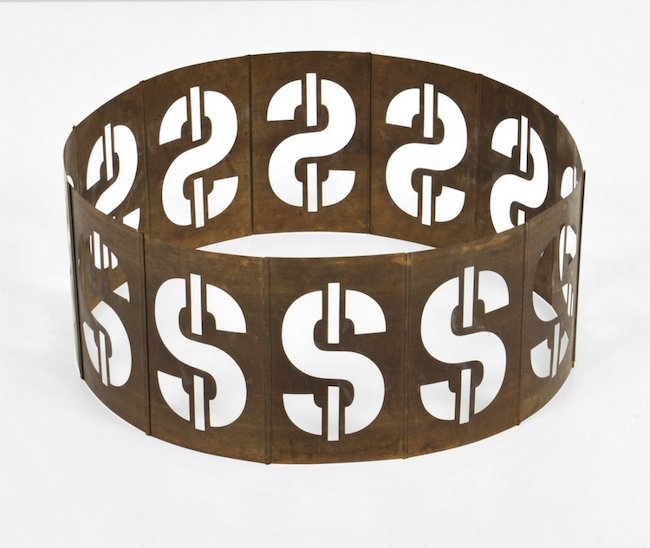 Free-standing sculpture “$” of bronze interlocking panels featuring cutouts of the US dollar symbol, signed and dated in felt pen along the bottom edge of one panel, 1981, measuring 20 inches in diameter. Provenance: Estate of Steve Rubell. Sold by Palm Beach Modern Auctions in 2013 for $44,000. Image courtesy LiveAuctioneers.com archive and Palm Beach Modern Auctions.

During the final decade of his life, Warhol began to collaborate with and assist up-and-coming artists, dabbled in television programming and modeling; and selectively accepted requests for commissioned artwork. One of his later commissions was a group of 10 screenprints titled “Endagered Species,” which he produced in 1983 following discussions with art dealers/environmental activists Ronald and Frayda Feldman. Warhol, who was also an animal lover, wanted to honor various species by placing them at a level of superstardom on par with the subjects of his celebrity series. His vibrantly hued Endangered Species portfolio was created to draw attention to the plight of animals facing extinction due to poaching and loss of habitat. Warhol chose a style of presentation and palette of colors similar to those used in his celebrity profiles in creating his incomprable set of animal screenprints. 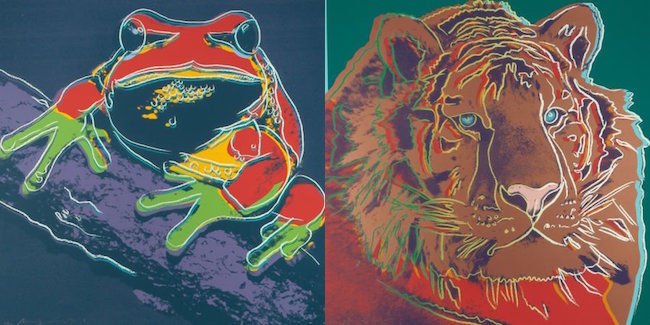 Examples of the “Endangered Species” series of 10 screenprints in colors on Lenox Museum Board, number 103 from the edition of 150 plus 30 artist’s proofs, 1983, each signed and numbered in pencil with the publisher’s stamp on verso. A set of 10 was sold by Heritage Auctions for $600,000 in October 2015. Image courtesy LiveAuctioneers.com Archive and Heritage Auctions.

It has been 20 years since the world bid adieu to pop-art icon Andy Warhol, who died of heart failure following gall bladder surgery. It is a testament to Warhol’s extraordinary vision that his art remains fresh and exciting, and that it continues to influence new generations of artists who are hoping for their own “15 minutes.”

Famous Photographers And Their Provocative Images
Scroll to top