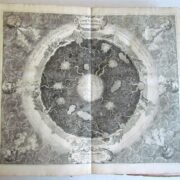 Unsurprisingly, the sale lineup is loaded with books that have religious themes, such as Bibles, books of sermons and books of common prayer, and even a 13-volume work on canon law. Also of note in this category is a 1577 Biblical commentary on Paul’s epistles to the Corinthians by John Calvin, founder of the Calvinist sect of Christianity, translated into English by Thomas Tymme; a 1661 German-language compendium of the writings of Martin Luther, whose famous protests gave rise to the Protestant religion; and a 1687 history of the first three hundred years of the Christian church. 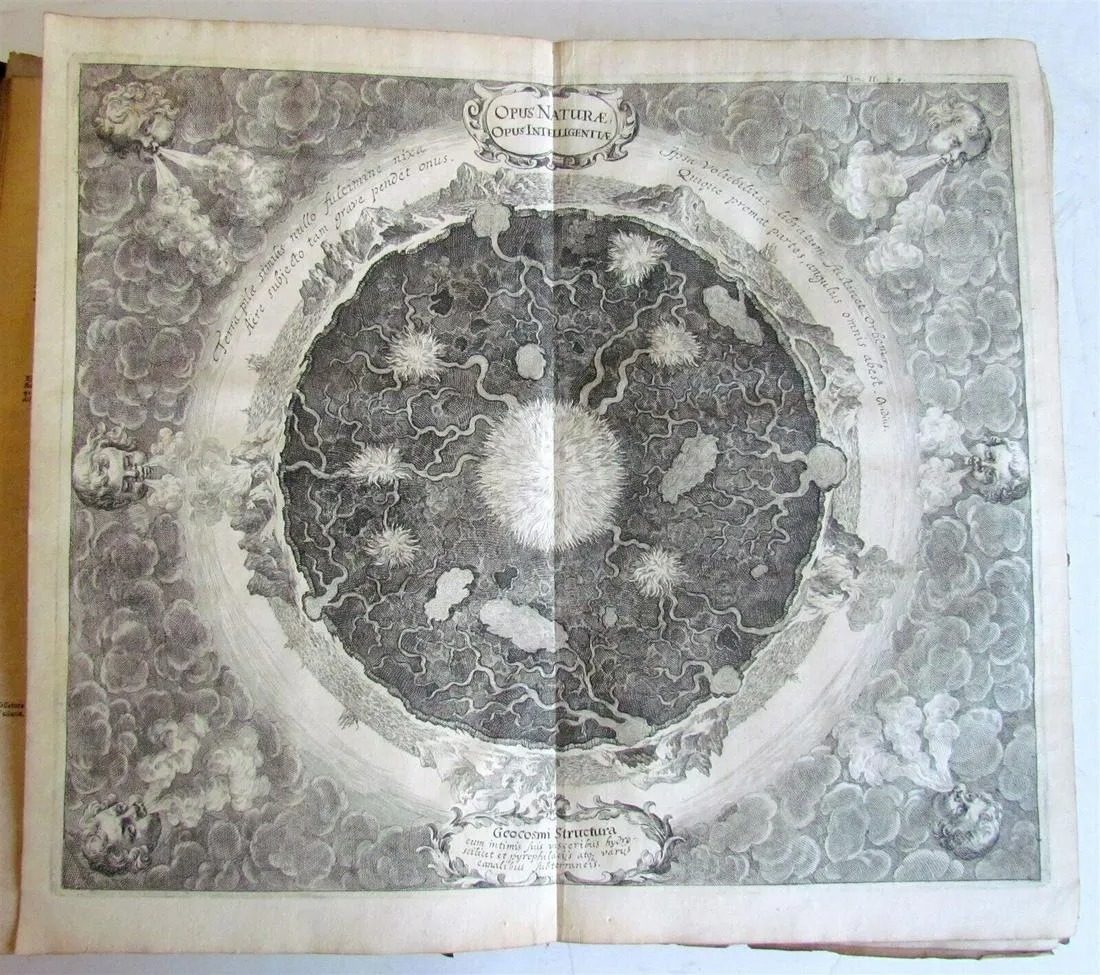 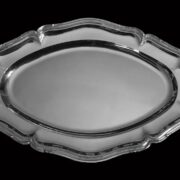 A group of 10 serving trays by Alphonse Debain; a 298-piece flatware set by Boin-Taburet, offered with a 15-piece serving platter set; and a late 19th-century eight-piece tea and coffee set by Emile Puiforcat will likely earn top lot status at Jasper52’s Exclusive Sterling Silver Auction, which will be conducted Wednesday, November 30, starting at 11 am Eastern time. Absentee and Internet live bidding will be available through LiveAuctioneers.

The 183-lot sale is dominated by examples of French silver. It features several objects by the renowned French maker Christofle, including a 10-piece tea and coffee set, a pair of five-arm Louis XVl candelabra, a seven-piece platter set, and a mahogany and silver plate Champagne bucket stand. 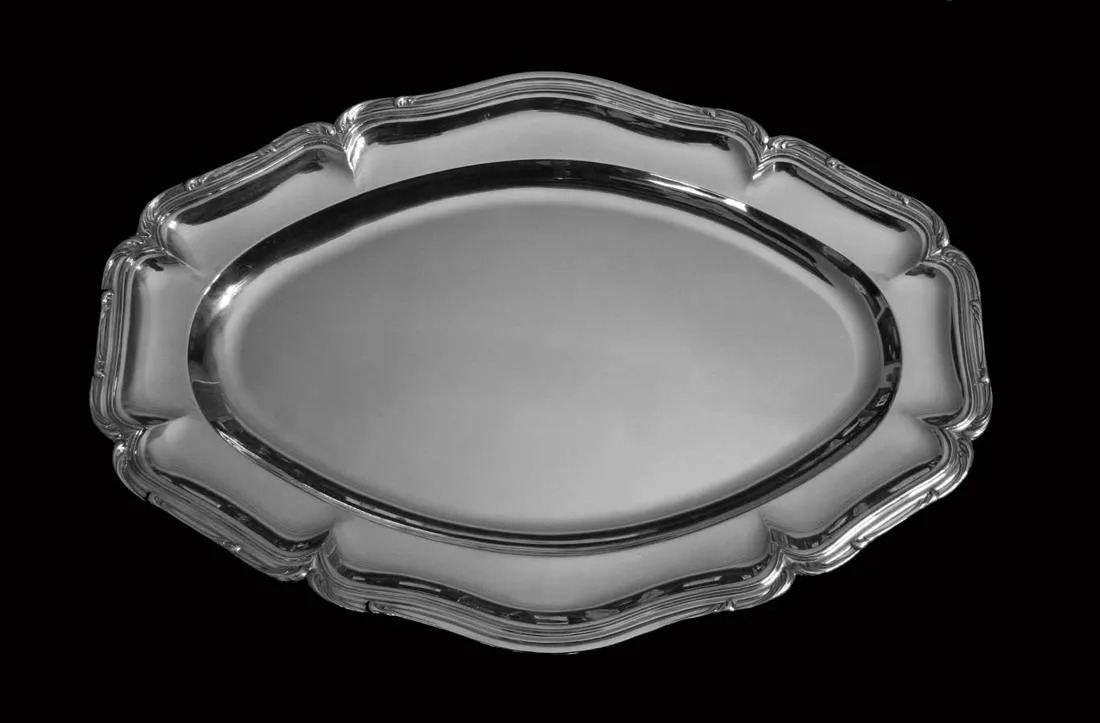 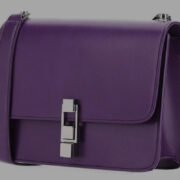 On Wednesday, November 23, starting at 7 pm Eastern time, Jasper52 will offer a sale of Designer Handbags and Clutches – more than 750 lots of pieces by virtually every great brand name in the category. Absentee and Internet live bidding will be available through LiveAuctioneers. 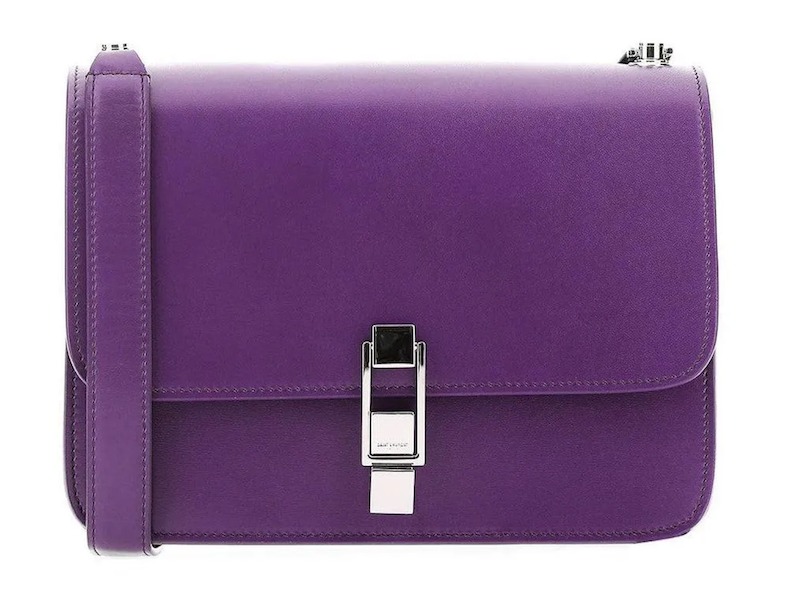 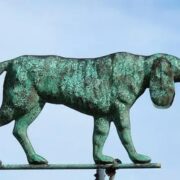 An exquisite Navajo rug, a charming mid-century American flag quilt, and an American copper setter dog-form weathervane will battle for top lot status at Jasper52’s Special Thanksgiving Americana Day 1 auction, which will be held on Thursday, November 24 – yes, Thanksgiving day – starting at 6 pm Eastern time. As is true for virtually every Americana auction offered through Jasper52, the sale is curated by Clifford Wallach, an expert in tramp art, folk art and Americana. Absentee and Internet live bidding will be available through LiveAuctioneers.

Also appearing in the 530-lot sale are needlework samplers, led by an 1825 example stitched in Goffstown, New Hampshire; a cast iron door-knocker featuring the image of a cat scratching at the door; a Frank Finney wood carving of a loon; tramp art boxes; stoneware jugs; a cast iron windmill weight in the shape of a rooster; several concert posters, including an original 1970 first printing touting a Frank Zappa and the Mothers of Invention show at Pepperland, a small venue near San Francisco; and a birdhouse by Outsider artist Benny Carter, painted to look like a bird motel. 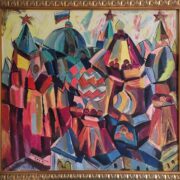 On Tuesday, November 15, starting at 8 pm Eastern time, Jasper52 will offer a sale of Exquisite Fine Art Paintings and Prints. Absentee and Internet live bidding will be available through LiveAuctioneers.

The 163 lots that appear in the lineup of the November 15 sale present a wide range of eye-pleasing images that represent an equally wide range of forms, subjects and eras. Of particular note are several charming beach scenes by French artist Huguette Ginet-Lasnier; an Italian circa-1600 painting of an old man and a courtesan; an 1869 Dutch School scene of barges on a canal in the process of loading; a Victorian English oil on canvas of a red-jacketed huntsman in full gallop atop his black steed, surrounded by a pack of running, eager hunting dogs; and a circa-2000 market scene that deftly dances the line between the figurative and the abstract. 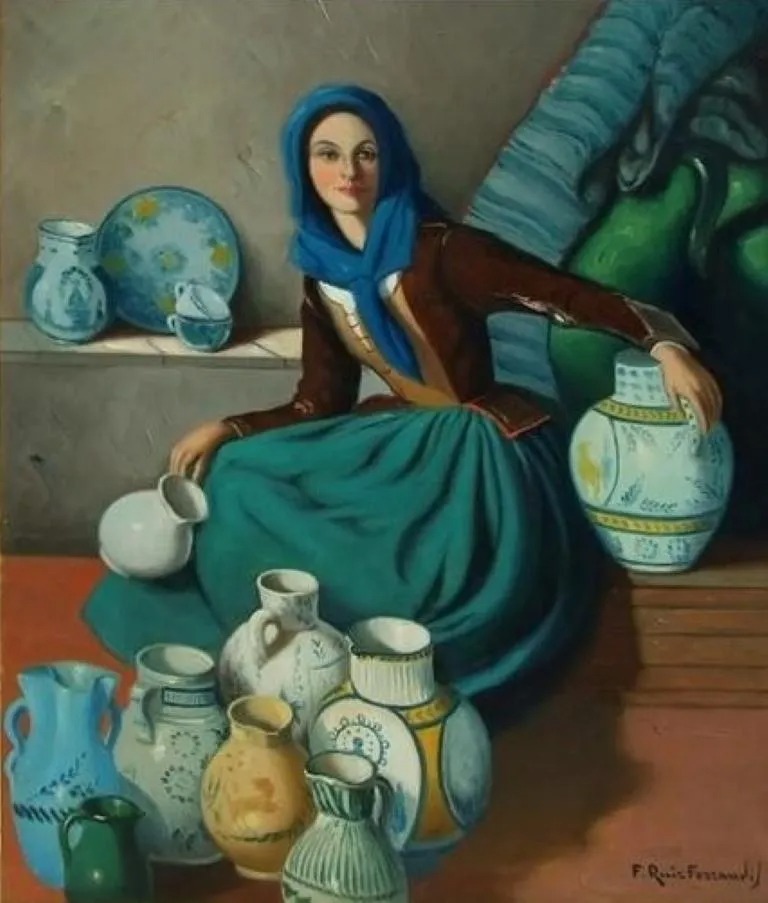 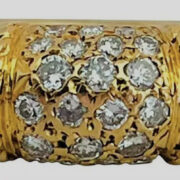 Not all that glitters is gold, and not all gold is yellow. The November 16 sale provides pieces in all shades of gold, and some feature more than one. Offerings in white gold include an 18K white gold ring centered on a GIA-certified yellow diamond; a vintage Roberto Coin 18K white gold cigar band ring pave-set with six rows of tiny blue sapphires; a Jude Frances 18K white gold, diamond and London blue topaz halo ring; and a 14K white gold heavy graduated concave bangle bracelet. 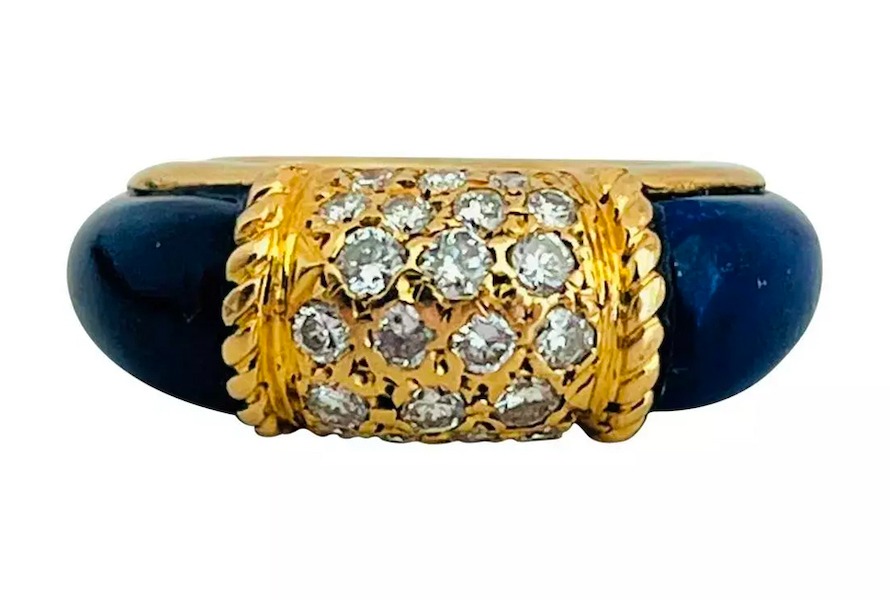 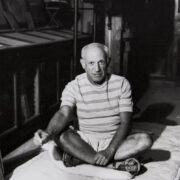 On Wednesday, November 9, starting at 8 pm Eastern time, Jasper52 will offer a sale of Vintage Gelatin Silver Photographs. Absentee and Internet live bidding will be available through LiveAuctioneers.

The tightly curated November 9 sale contains precisely 100 lots of vintage photographs, all in black and white and almost all having to do with celebrity and fame in some way. Among the selections are Ramey Sam Shaw images of a grinning Marilyn Monroe standing over a subway grate, trying and failing to hold her skirts in place; Russell C. Turiak’s portrait of a shirtless Arnold Schwarzenegger on a tennis court, racket in hand; Annie Leibowitz’s depiction of a suit-and-tie-wearing Bruce Springsteen; and an unforgettable Bob Carlos Clarke portrait of Ozzy Osbourne, seated and barefoot and staring directly at the camera. 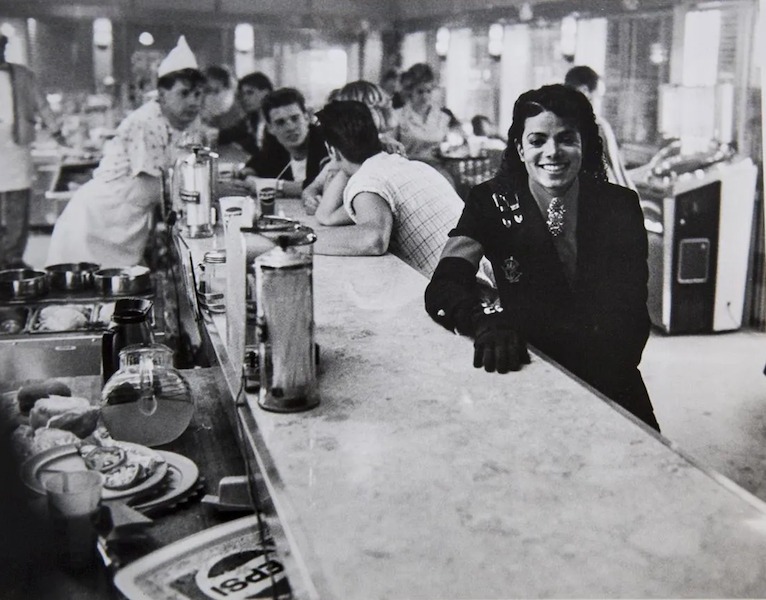 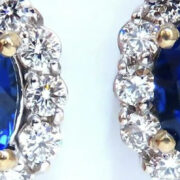 A pair of halo cluster dangle earrings featuring emeralds and diamonds, a pair of arched cluster domed diamond earrings, and a pair of earrings sporting two GIA-certified natural blue sapphires will compete for top lot status at Jasper52’s Classic to Modern Diamond Earrings auction, which will take place on Tuesday, November 8, beginning at 1 pm Eastern time. Absentee and Internet live bidding will be available through LiveAuctioneers.

Almost 475 lots appear in this sale, offering dozens upon dozens of iterations of diamond-ornamented earrings and ear clips. Rendering the sale lineup especially notable is its selection of pieces sporting red stones, which include a necklace, earrings and bracelet set featuring 45.20 carats of natural rubies; earrings centered on two raspberry red spinels ringed with diamonds and set in 14K gold; a pair of ruby and diamond chandelier earrings; another pair of diamond and ruby dangling earrings designed to look like bullseyes; and triangle-shaped ruby and colored diamond earrings in a mesh of 18K gold. 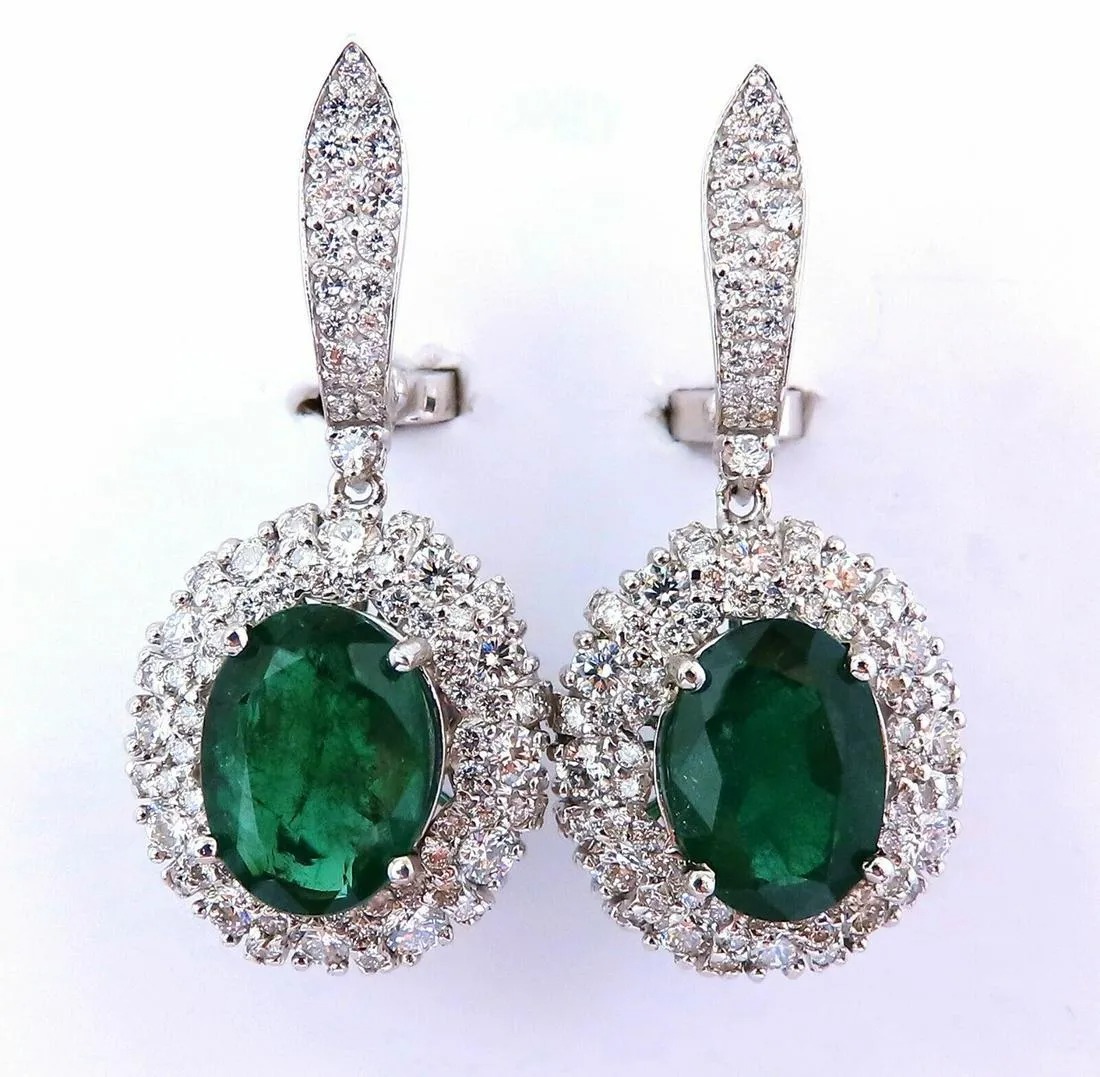 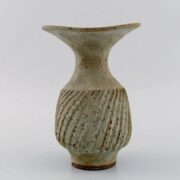 On Tuesday, November 1, starting at 4 pm Eastern time, Jasper52 will conduct a sale titled Exclusive Art Pottery and More, featuring 257 lots of head-turning pieces, many by name artists. Absentee and Internet live bidding will be available through LiveAuctioneers.

Among the works on offer are a Suzanne Ramie large stoneware vase for Atelier Madoura, with the colors of a dusky orange sunset; a kidney-shape, gold-colored dish by Hans Hedberg; a sculptural stoneware vase by Christina Muff which, for all the world, looks like a puffy cloud has floated down from the sky and taken a firmer, more solid form; a stoneware vase by Svend Hammershoi in an absolutely striking and slightly menacing shade of black; and a few Zsolnay vases, both with spellbinding yellow-green luster glazes. 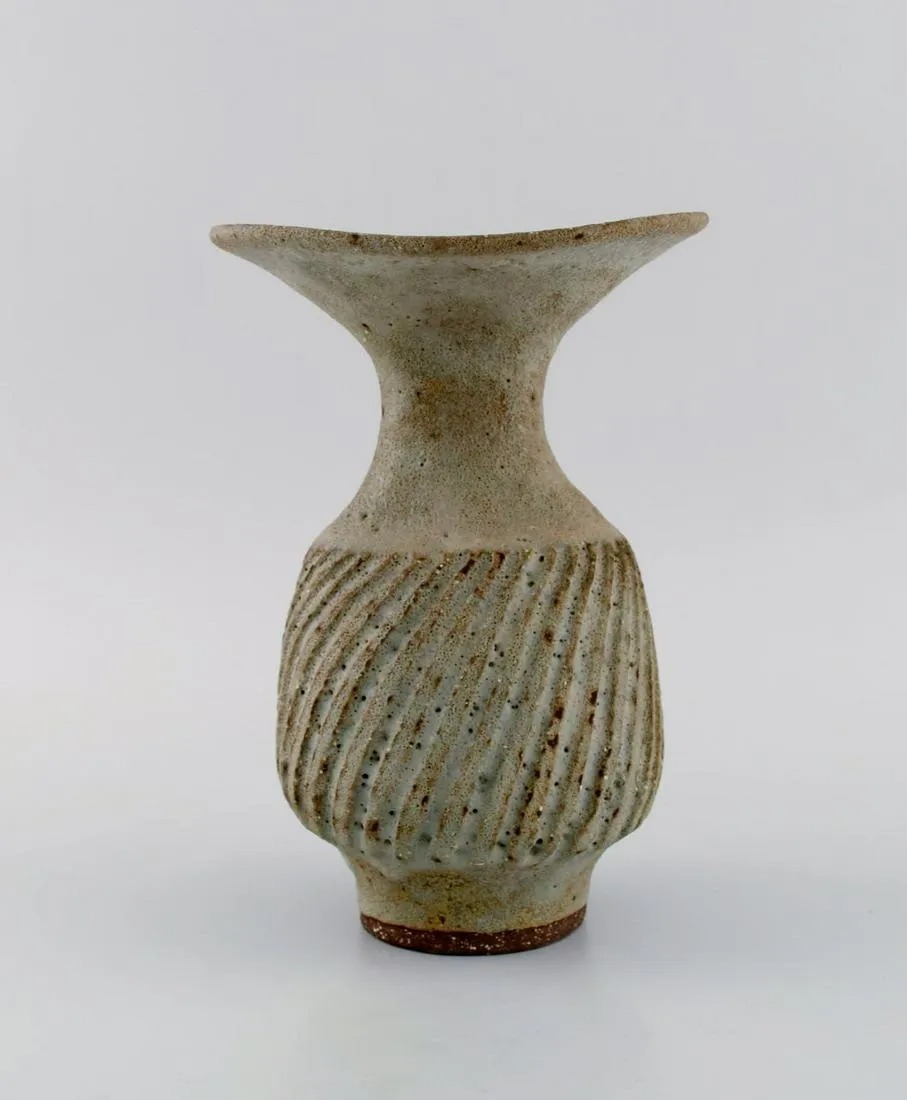 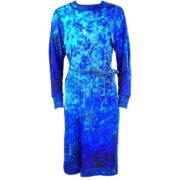 With fall in full effect, it’s no surprise that several lots in the 368-lot sale showcase jackets and outerwear. Offerings include a Gianfranco Ferre long black wool coat with belt; a vintage Hermes blue suede jacket; a Valentino silver-tone black leather jacket festooned with turquoise studs; a Dolce & Gabbana mini trench coat in gray; a quilted brown leather Moto jacket with the word GUCCI emblazoned across the upper back in pink velvet and pearls; and a navy blazer jacket by Ralph Lauren. 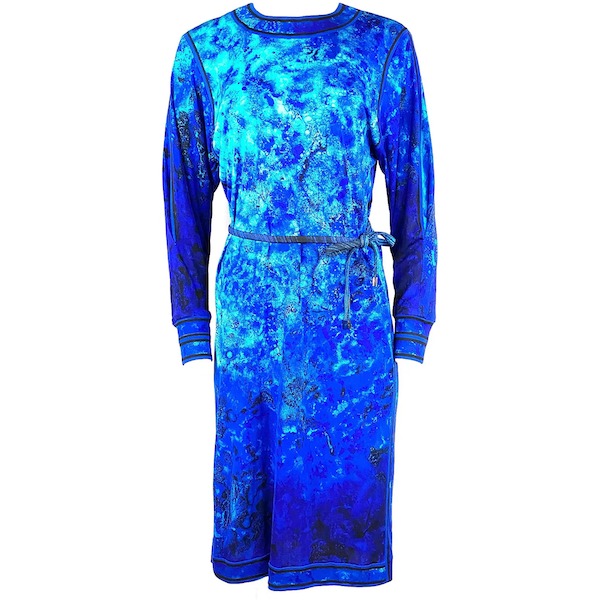