NEW YORK – Cameo jewelry dates back to antiquity when portraits were relief-carved out of hardstone, often onyx or agate, and then set in gold or silver. Carnelian shell, sardonyx, lava and coral are also popular materials. Cameos are not created equally; French and Italian makers are often credited as producing the most beautiful examples. What makes one more valuable than another to a collector has a bit to do with the subjective taste of the buyer but more so the skill of the maker. Overall, the more intricate the cameo’s features and exacting the detail, the more desirable it becomes. The quality of the setting also is important. 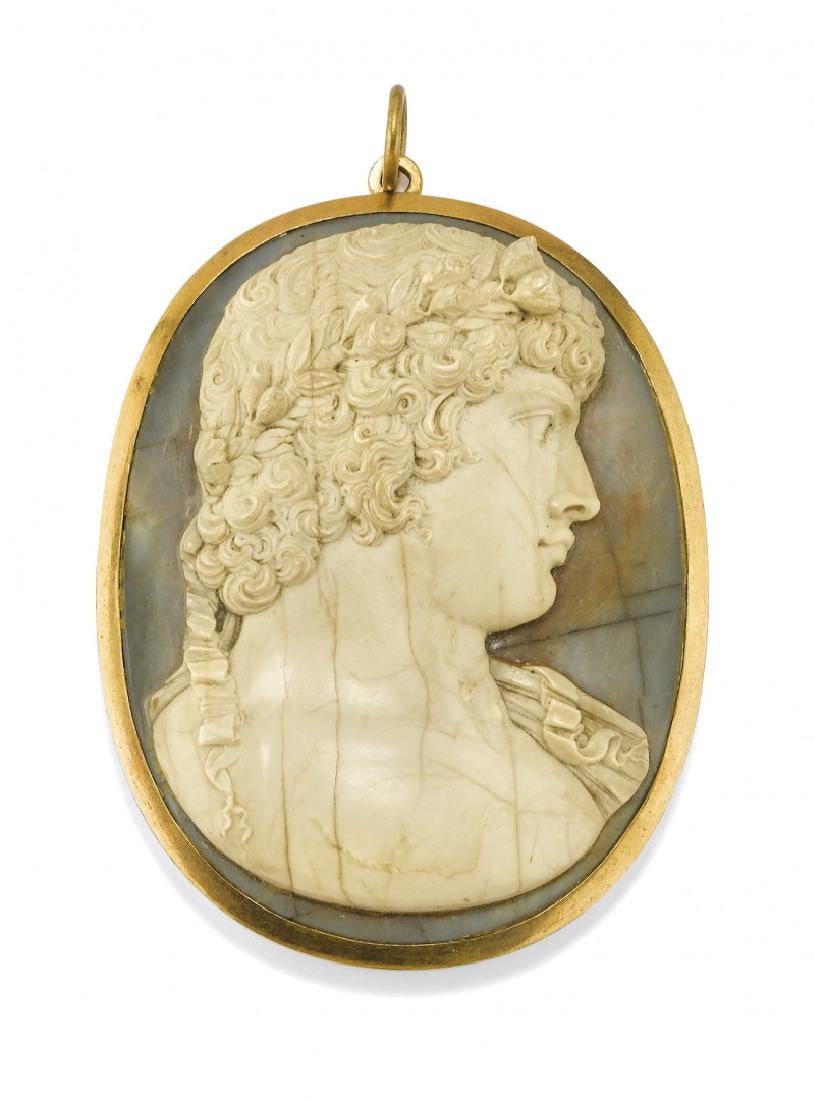 An antique hard-stone cameo having an oval-shaped intaglio of a masculine profile adorned with laurel and flower wreath sold for €11,000 + the buyer’s premium in March 2018. Photo courtesy of Aste Bolaffi and LiveAuctioneers

A cameo is a form of the glyptic arts featuring bas-relief carving, which traditionally depicts landscapes, portraits (mostly women but men are seen too, especially rulers), and mythological creatures. Allegorical scenes are also sought after by those who collect authentic cameo jewelry. Among common motifs on cameos were the Three Graces, aka the Charities, who have been referenced in both Greek and Roman mythology. They are said to represent beauty, nature and fertility. “The faces bring a sense of feminine power and simple elegance that women find intriguing worldwide,” wrote Preston Reuther in an online article here.

Cameos have been made into all kinds of jewelry, from necklaces to brooches, but rings are common. In ancient Greece and Rome, cameos were predominantly used in large earrings and signet rings to seal documents. 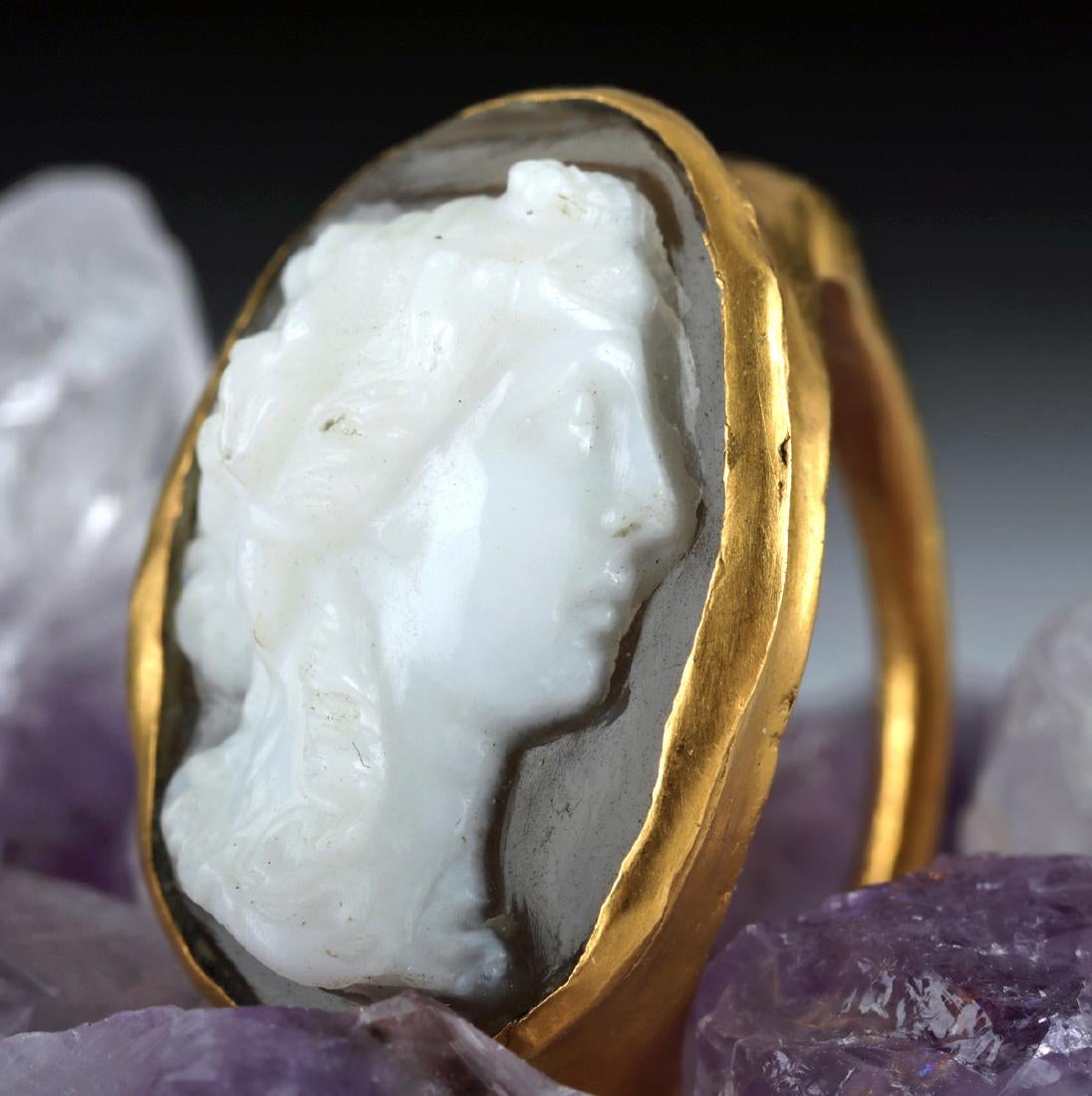 A Hellenistic gold and agate cameo ring, first century, made $10,000 + the buyer’s premium in October 2018. Photo courtesy of Artemis Gallery and LiveAuctioneers

Jewelry trends come and go and often what’s old often becomes new again. Cameo jewelry has long remained popular, however, as people seek out a vintage look that is both simple and timeless in design. While contemporary artisan jewelers continue to make modern cameos (the singer Rihanna released a cameo jewelry collection in fall 2019 celebrating the beauty of black women), many aficionados seek out antique and vintage examples. Modern day examples, particularly in costume jewelry, will use glass or plastic and lesser ones are made using molds.

Cameos are traditionally associated with the Victorian period, and indeed during the Grand Tour in this era, among prized souvenirs that women would bring back home were cameos. There have been many revivals of interest over the centuries, however. From the ancient Greeks, the techniques to create these miniature sculptures were passed down to Egyptians, Romans and so on. 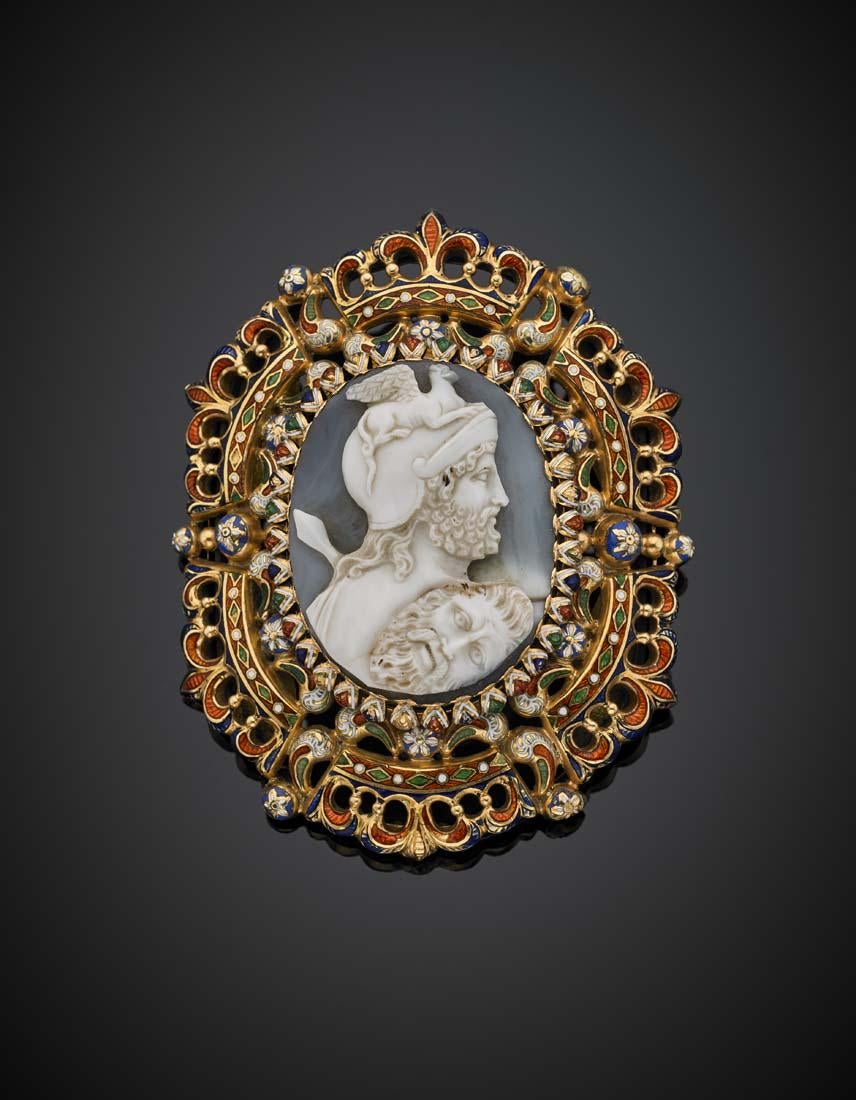 “The Hellenistic Greeks were the first to excel at carving small hardstones with figures in relief, often in the images of deities or other talismanic signifiers,” according to the Metropolitan Museum of Art in New York. The museum’s collection is particularly strong in Neoclassical works from the mid-19th century.

Cameos have been avidly collected by the well-to-do and royal families and today there are many fine examples in museum collections today. The Marlborough collection, which was assembled in the 18th century by George Spencer, the 4th Duke of Marlborough, was said to include a number of striking cameos, including a portrait of one of the wives of infamous Roman emperor Caligula, her profile carved into a sapphire ring. Other noted cameo collectors include Napoléon, who established a Parisian school in Paris to teach cameo carving techniques. He often gifted his wife Josephine with cameos and had gold crowns set with cameos made for both of them for his coronation as emperor. Pope John Paul II also was a collector and wore several cameo rings embodying religious themes. 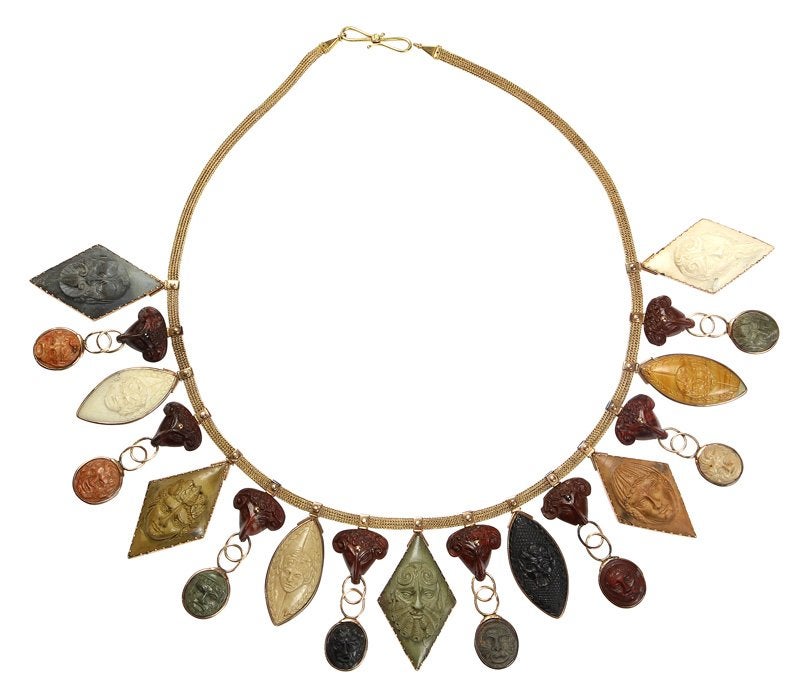 One of several notable pieces owned by the Metropolitan Museum of Art is this cameo, circa 1530-40, depicting a portrait of then-Queen of Poland Bona Sforza, having the signature of renowned engraver/goldsmith Gian Giacomo Caraglio and inlaid with gold. In London’s V&A Museum is a cameo of Queen Elizabeth I, made about 1575-1580 by an unknown artist. Queen Victoria was also reported to be a fan of cameos.

Demand for engraved gems in Europe peaked in the Byantine era, the Middle Ages, the Renaissance, and again in the 18th and 19th centuries, according to the V&A’s website. “At each stage cameos and intaglios, these skillful carvings on a minute scale, were much prized and collected, sometimes as symbols of power mounted in jeweled settings, sometimes as small objects for private devotion or enjoyment.” Carved stones were often collected by the wealthy and those in power, and often given as diplomatic or royal gifts. 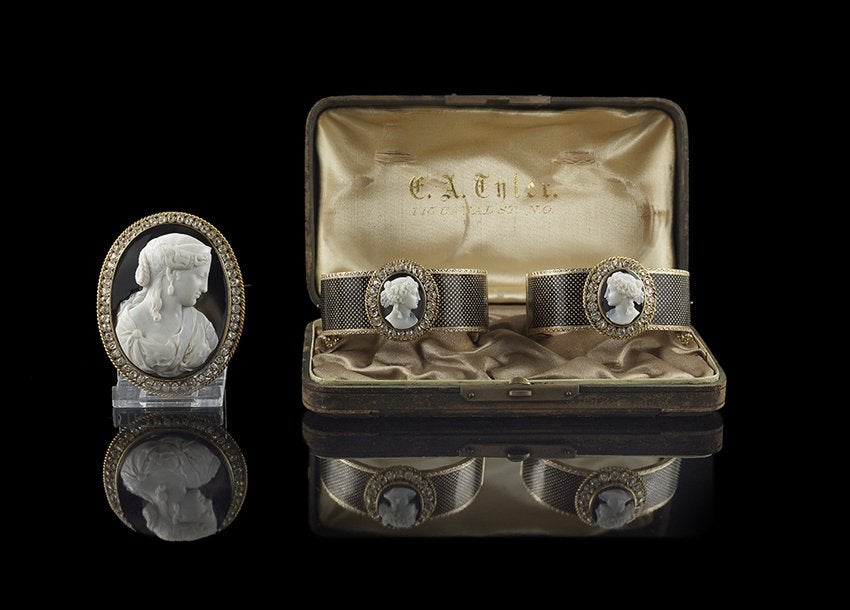 A gold and onyx cameo demi-parure, featuring a large cameo brooch and pair of cameo cuff bracelets, earned $9,750 + the buyer’s premium in May 2016. Photo courtesy of New Orleans Auction Galleries and LiveAuctioneers

Once a symbol of status and power, cameo jewelry today continues to be appreciated for its craftsmanship and timeless beauty. Worn singly or layered to dramatic effect as in a cameo pendant necklace, cameo jewelry is not a relic from Grandma’s jewelry armoire but a valuable addition to one’s collection.