“Baruch ata Ado-nai, Elo-heinu Melech ha’olam, Asher kid’shanu b’mitzvosav v’tzivanu l’hadlik ner shel Chanukah.” Translated to English, this means: Blessed are You, Hashem our G-d, King of the universe, Who has sanctified us with His commandments, and has commanded us to Kindle the Chanukah light.”

The above blessing (Bracho) is one of three that are recited during the lighting of Hanukkah (traditionally spelled Chanukah) candles during the eight-day Jewish celebration. This year, Hanukkah began at nightfall on December 12 and will conclude at nightfall on Dec. 20. In recognition of this celebration, also referred to as the “festival of lights,” let’s explore Hanukkah – and other Jewish holidays – and view some of the cherished artifacts associated with the Jewish faith.

Hanukkah commemorates the rededication of the Jewish temple in Jerusalem early in the second century B.C. The Jewish people faced persecution when Antiochus IV Epiphanes, the, Hellenistic Greek king, took control of the region during the end of the first century B.C. During his reign, he outlawed Judaism and defiled the Holy Temple by erecting an altar for the worship of Greek god Zeus. A group of Jewish citizens known as the Maccabees, led by priest Mattiyahu (Matthias), rose up in defiance to the rule of Ephiphanes. They were successful and regained control of the temple and the right to practice their religion.

Once they had rid their region of oppressors, they set to work cleansing and purifying the temple so it could be rededicated as a holy place. They sought olive oil to use as fuel for the lighting of the menorah (candelabrum) within the temple. Although there was only enough oil to fuel the light of the menorah for one day, the oil ended up lasting eight days as the people celebrated the freedom to practice their beliefs in the temple. Hence, this miracle of sustainable light serves as the inspiration for the eight days of Hanukkah. 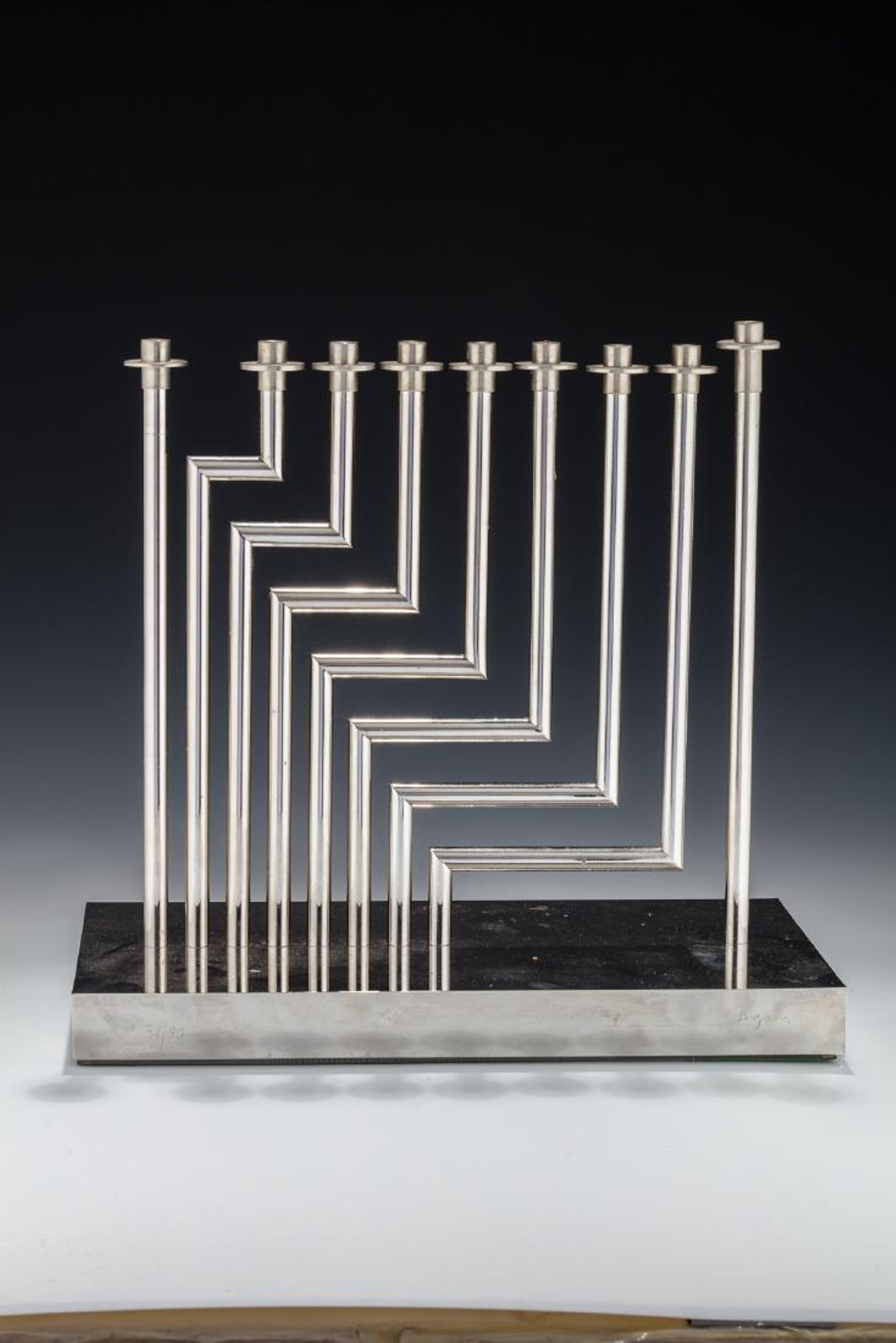 Among the most notable objects associated with Hanukkah is the menorah, a sacred candelabrum or lamp that has either seven or nine branches for holding candles. In the nine-branched version, one of the branches is taller than the rest, and its role is to hold the Shamash – the candle that is used to light each of other candles during Hanukkah.

Menorah Note: Various sources point to the seven-branch menorah as a symbol of enlightenment. It is also a symbol of the menorah that resided in the Holy Temple in Jerusalem. A nine-branch menorah, or “hanukkiyah,” is used exclusively during Hanukkah. Menorahs have been constructed of brass, silver, pewter, copper, stone, glass and porcelain.

In addition to menorahs, other objects commonly seen during the Hanukkah celebration and popular with children are gelt and dreidels. 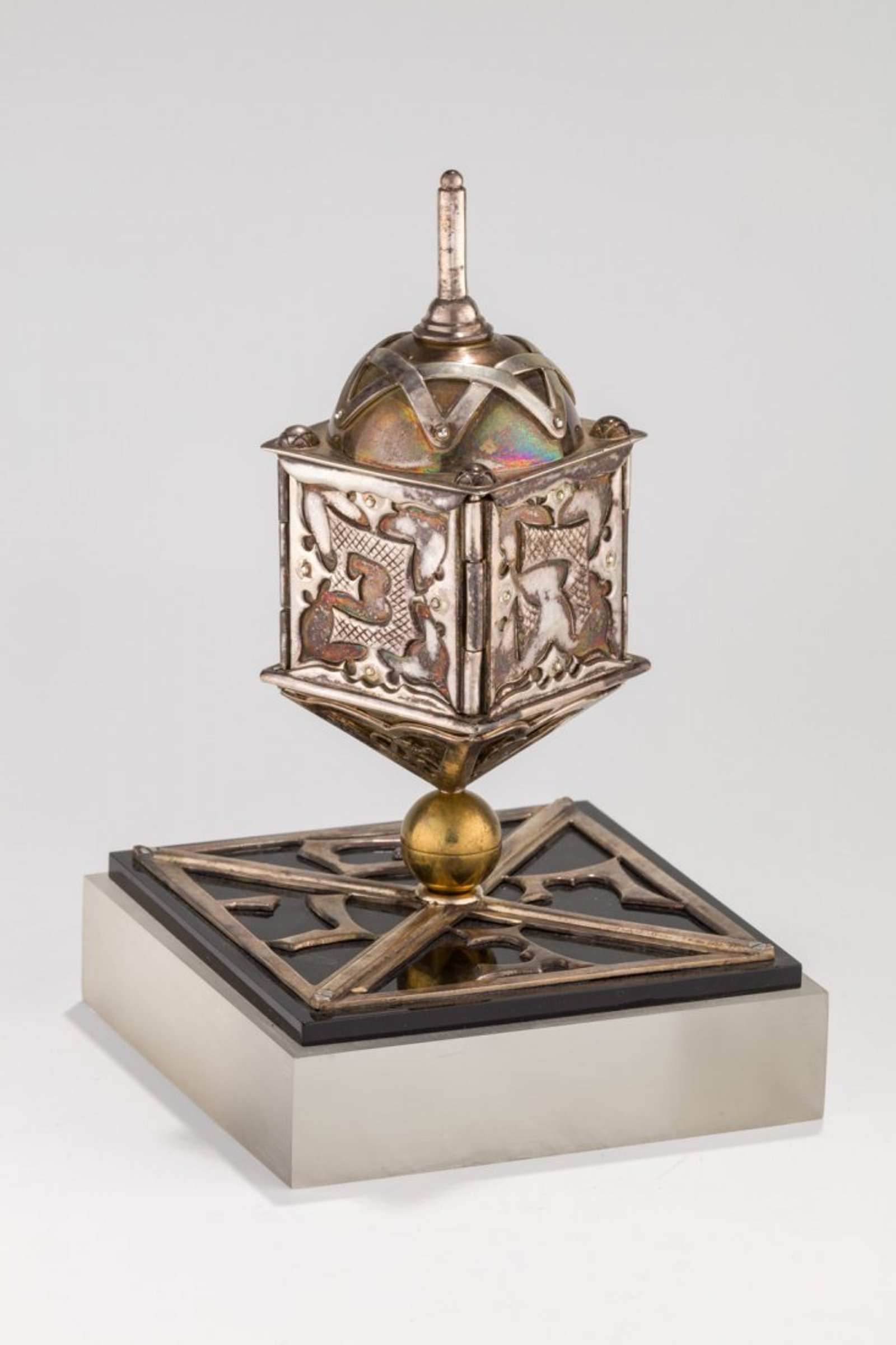 Gelt is a gift of money or possibly sweets packaged to look like money. A dreidel is a plaything that served an important, and possibly life-saving, purpose when the Holy Land was under Greek-Syrian reign, before the Maccabean rebellion. In Yiddish, “dreidel” means “spinning top.” Traditionally made of wood, later examples of dreidels have been made of plastic. In addition, there are fine silver dreidels, but they are for display rather than play.

Each of the four sides of a dreidel bears a different Hebrew letter, and together the four letters are an acronym of the Jewish phrase “Nes gadol hayah sham,” which translates into “a great miracle happened there.” This refers to the Maccabean revolt. During the time of Greek-Syrian rule, studying the Torah or practicing any form of Judaism was forbidden, and the punishment was death. To avoid attracting attention from their captors, Jewish children would convene in caves along hillsides to conduct their religious study. In the event a Greek soldier would come upon them, the children would quickly take out their tops and begin to play a game. In the traditional dreidel game, each person is given an equal number of tokens (in some instances children use their gelt) and they must place a token in the “pot/kitty” before spinning the dreidel. After their spin, the player must take an action related to the letter on which the dreidel lands. These actions are related to the tokens that have accumulated in the pot/kitty.

In addition to these items of the Hanukkah celebration, several objects associated with other Jewish holidays are highly sought after by those with an interest in Judaica. The following are examples representing the holidays:

Considered a High Holiday of the Jewish faith, Yom Kippur is the holiest day of the year. This “Day of Atonement” involves fasting, reflection and prayers of forgiveness during a period of less than 26 hours during September. This holiday derives from the return of Moses following his ascension of Mount Sinai, where he sought God’s forgiveness on behalf of the transgressions of the people of Israel. His return from the top of the mountain was known from then on as the Day of Atonement – Yom Kippur. An object often associated with Yom Kippur and the other High Holiday (Rosh Hashanah) is a shofar, a ram’s horn that is blown after Yom Kippur services. 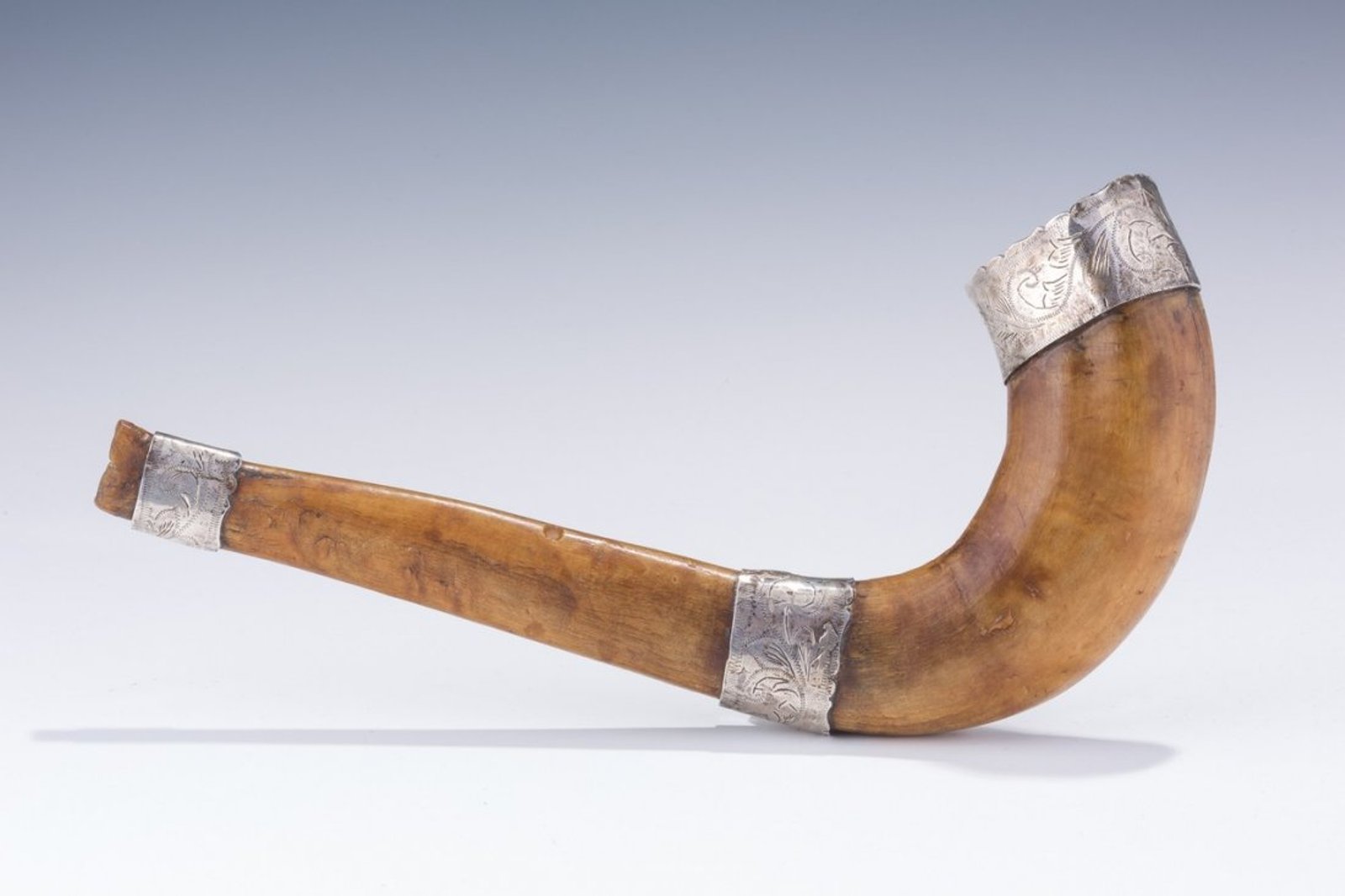 Another eight-day (seven days in Israel) festival of the Jewish faith, Passover (Pesach) marks the Jewish peoples’ deliverance from slavery in ancient Egypt. This came about following God’s imposement of 10 plagues on Egypt after the pharaoh repeatedly ignored God’s message – sent via Moses – to free the Israelites. The final plague was death to all firstborn children of the Egyptians, but it “passed over” Jewish households. This final plague convinced the pharoah to chase the Israelites, led by Moses, out of Egypt.

During the observation of Passover, which takes place during spring – late March to early April – the first two and last two days of the celebration are considered holidays during which no work is to be done, vehicles must not be driven, and devices must not be operated. Also, no leavened grain, pasta or beverage with wheat, barley, rye or oats should be consumed during Passover, honoring how the Jewish people ate only unleavened bread following their escape from Egypt. The central event of Passover is the seder, which takes place during the first two evenings. It is a feast with traditions, rituals and special dishes. Among the objects present during seder are ornate silver goblets and plates. 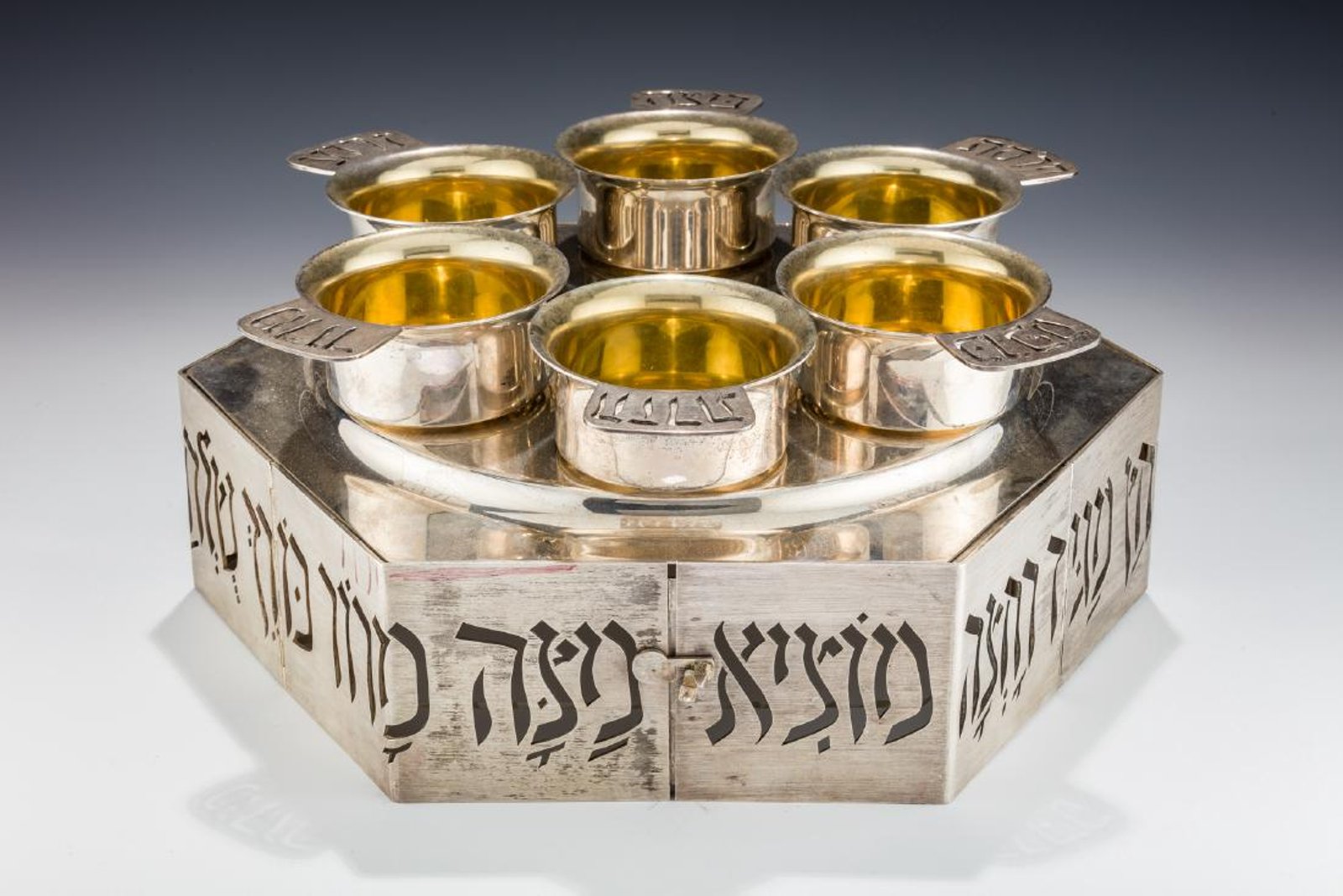 Rosh Hashanah represents the “first of the year,” or the Jewish New Year. Like Yom Kippur, Rosh Hashanah takes place in September. During Rosh Hashanah, Jewish people reflect on the past year and resolve to improve themselves in the the new year. Objects of Judaica present during Rosh Hashanah’s traditional practices are the shofar and a machzor (unique prayer book), among others.

Shabbat (the Sabbath) is a year-round, weekly occurrence steeped in rest, reflection and celebration of faith. It begins every Friday at sunset and concludes just after nightfall on Saturday. In the Jewish faith, the observance of Shabbat is one of the 10 Commandments God gave to Moses during his time on Mount Sinai. Shabat includes a feast, storytelling and singing related to lessons found in the Torah. Among the objects used during Shabat are candlesticks, kiddush cups, and sacred trays for serving the meal. 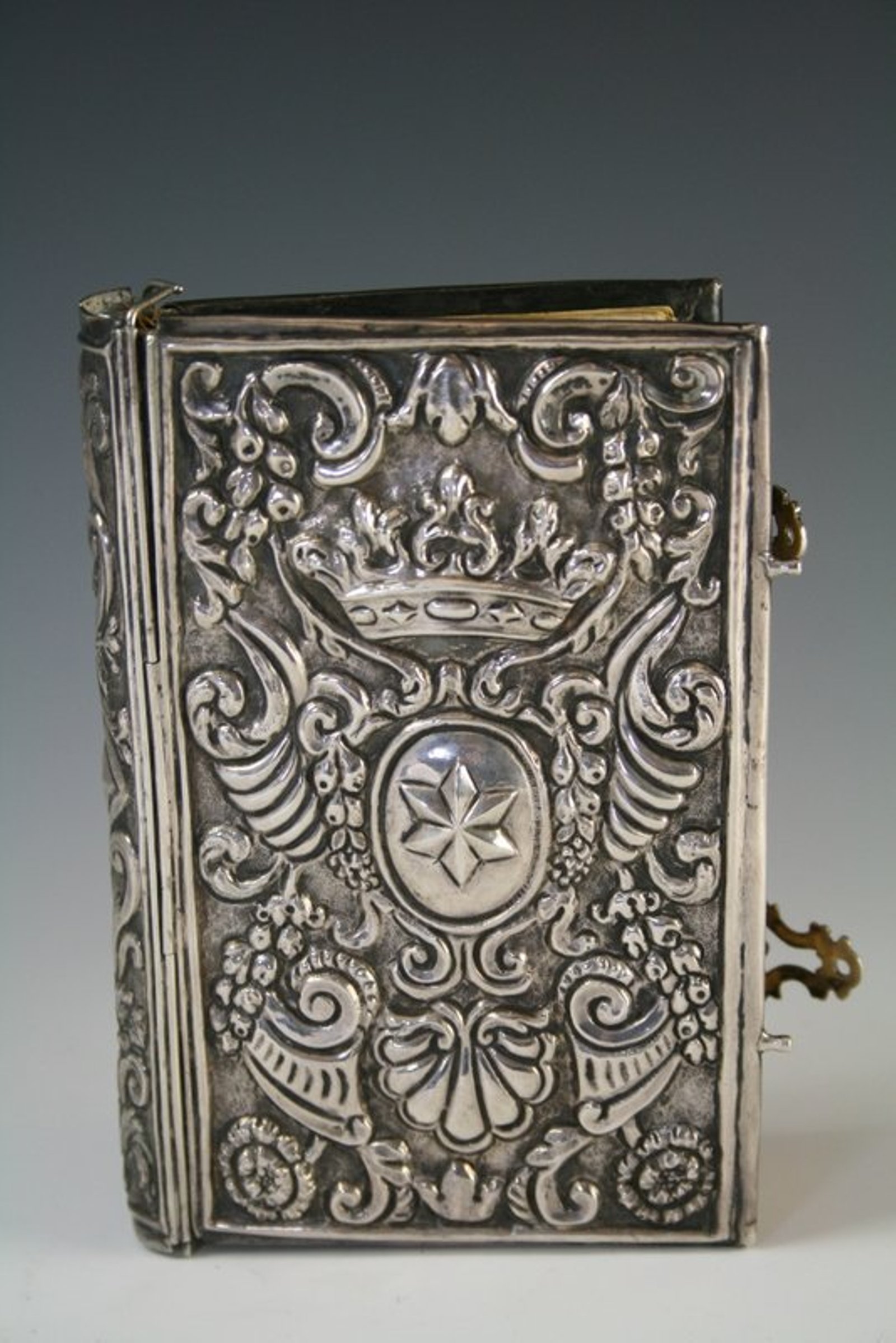 As the time-honored traditions of Jewish celebrations demonstrate, followers of the faith place high importance on self-reflection and self-improvement. Objects associated with Jewish holidays are symbolic of the religion’s principles, which explains why there is so much appreciation for Judaica, especially treasured pieces handed down through subsequent generations of a family. 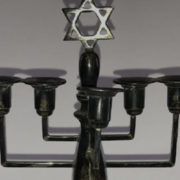