NEW YORK – Regulator clocks, also known as pendulum clocks, make a striking addition to any traditional decor. Housed in handsomely carved wooden cases, usually as floor standing models with some topping 100 inches in height, regulators made by the E. Howard & Co., were among the finest of all regulator clocks. E. Howard was a leading company among American clockmakers, creating their elegant timekeepers since the 19th century. Collectors today seek out choice examples, but E. Howard’s early 19th-century regulators are especially collectible. 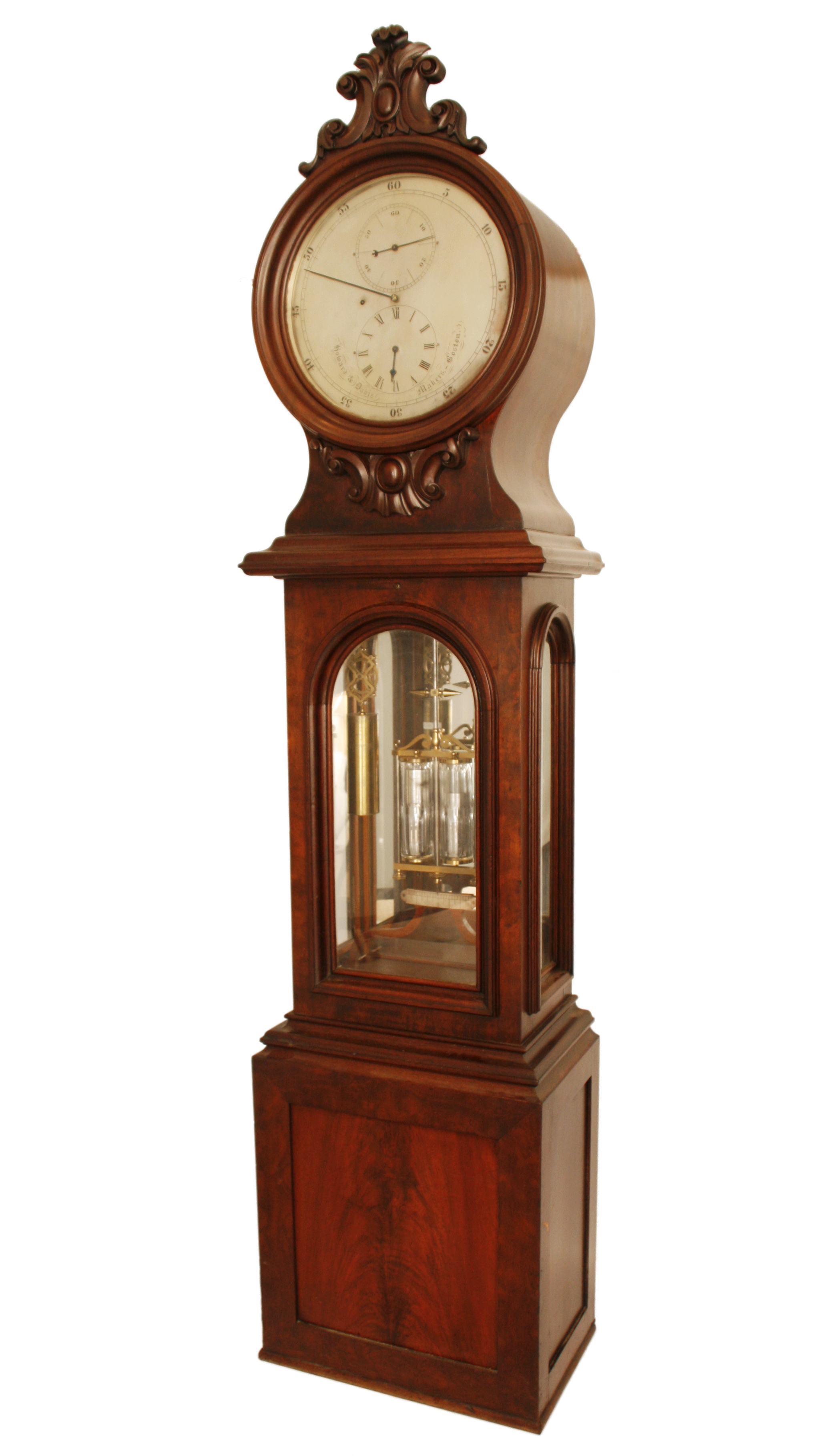 E. Howard & Co., began when David P. Davis left the firm of Howard & Davis, which had been established in 1842, according to John Fontaine, owner of Fontaine’s Auction Gallery in Pittsfield, Massachusetts. Fontaine’s specializes in regulator clocks.

Both Edward Howard and David P. Davis served their apprenticeships under the famous clockmaker Aaron Willard Jr. of Boston. Their company reorganized and changed hands over the decades, and in the 2010s, shifted gears to focus on making wristwatches instead of clocks. 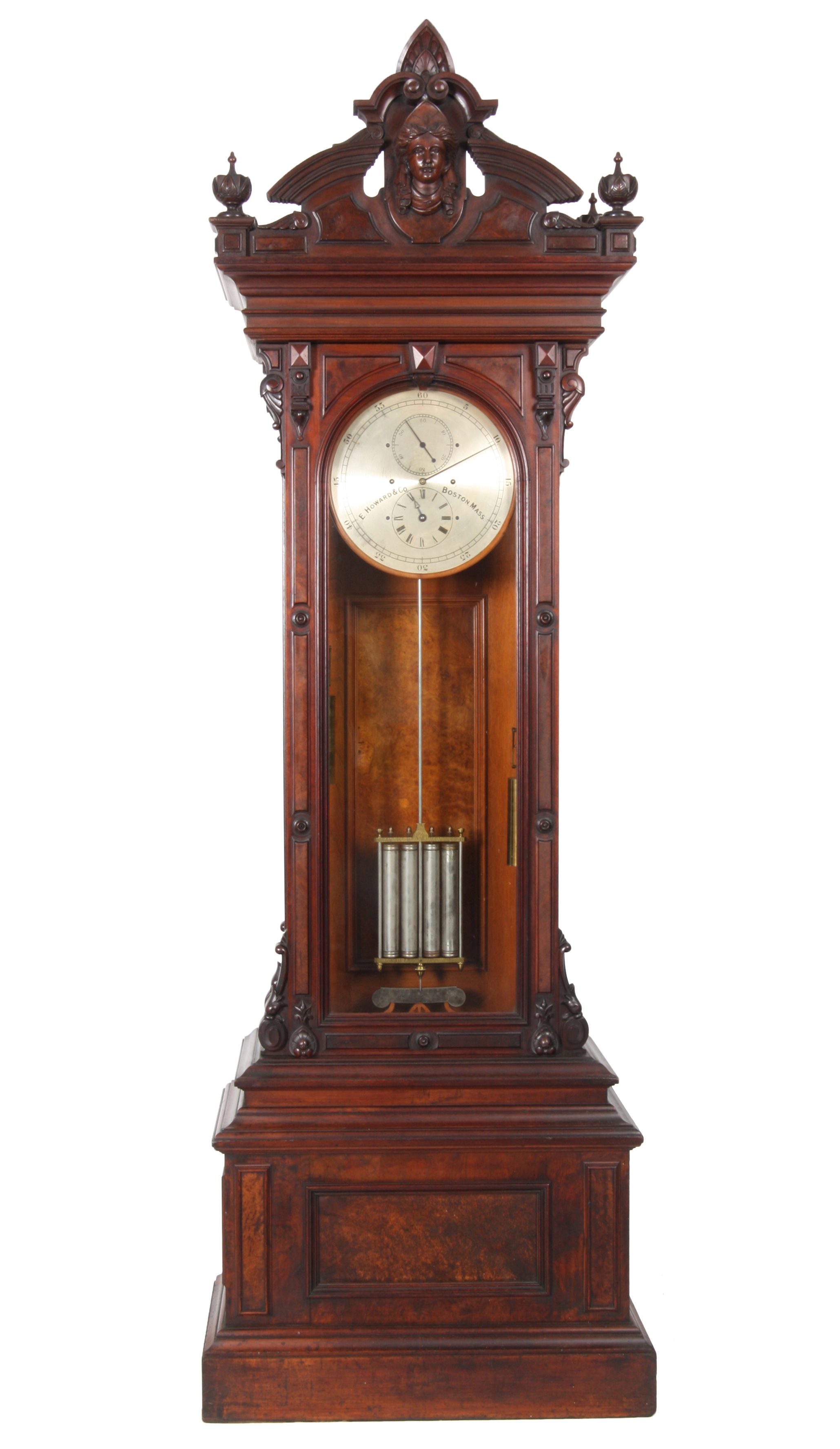 This E. Howard & Co. No. 68 astronomical regulator clock earned $277,300 in November 2013, a record for the model at auction. Photo courtesy of Fontaine’s Auction Gallery and LiveAuctioneers

“E. Howard & Co. produced some of the finest American handmade timepieces out of Boston and was a leading manufacturer of weight-driven regulator clocks,” Fontaine said. “The pendulum clock, invented in the mid-17th century and also known generically as a regulator clock, is a precise timekeeper. It uses a swinging pendulum to regulate the speed of the clock depending on the length of its pendulum. E. Howard was one of the best, not only in producing these mechanisms, but also pairing them with the finest floor standing and wall hanging cases.” 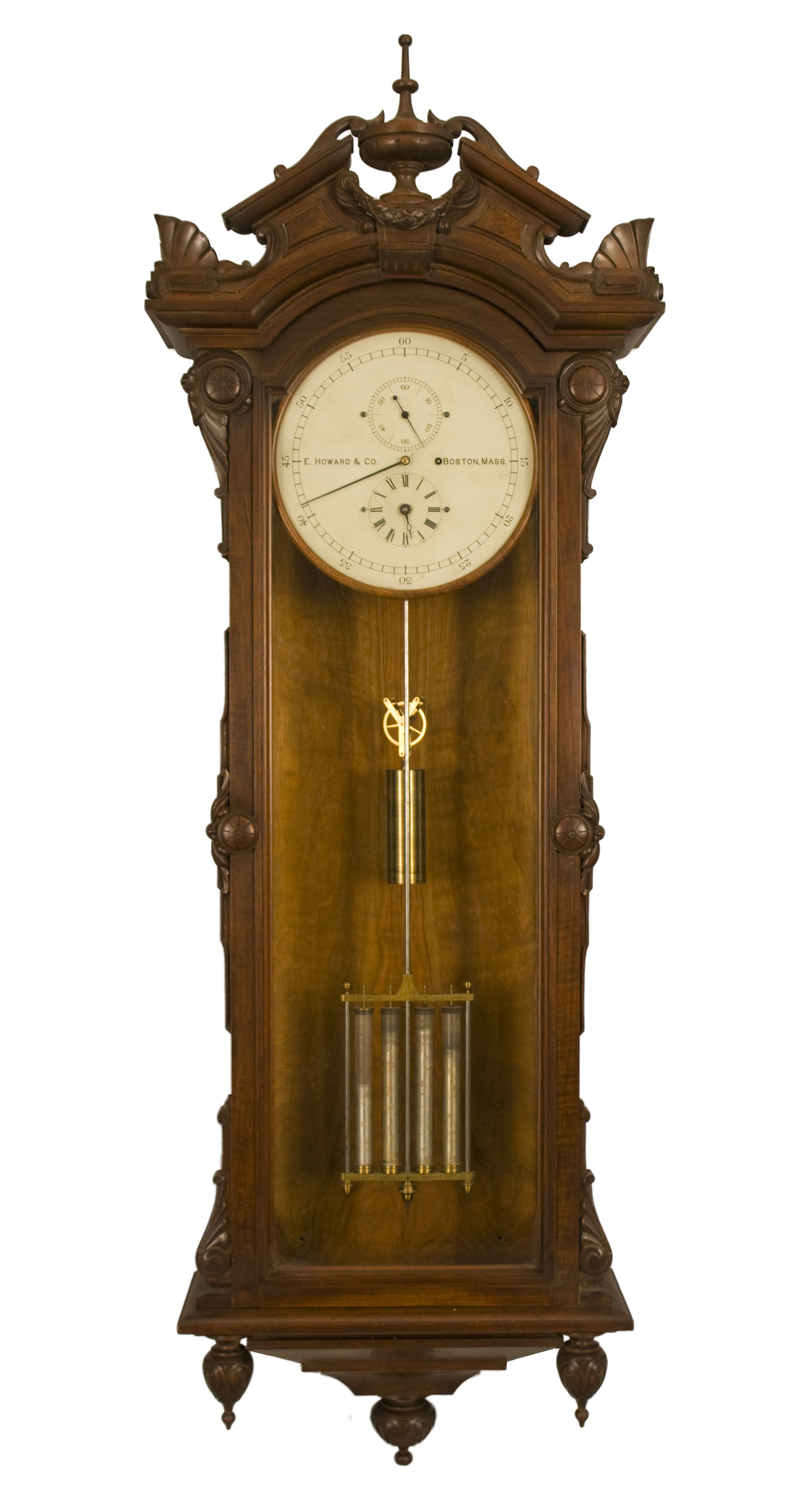 Fontaine’s Auction Gallery holds most of the world auction records for the rarest E. Howard regulators sold, including a No. 47 astronomical hanging regulator that achieved $356,950 in November 2014. The 8-foot, 3-inch-high clock case embodies the best of the American Renaissance Revival movement and is made from hand-carved American walnut with carved finials and incised burled trim. Its monumental crest bears a carved bust of Christopher Columbus. 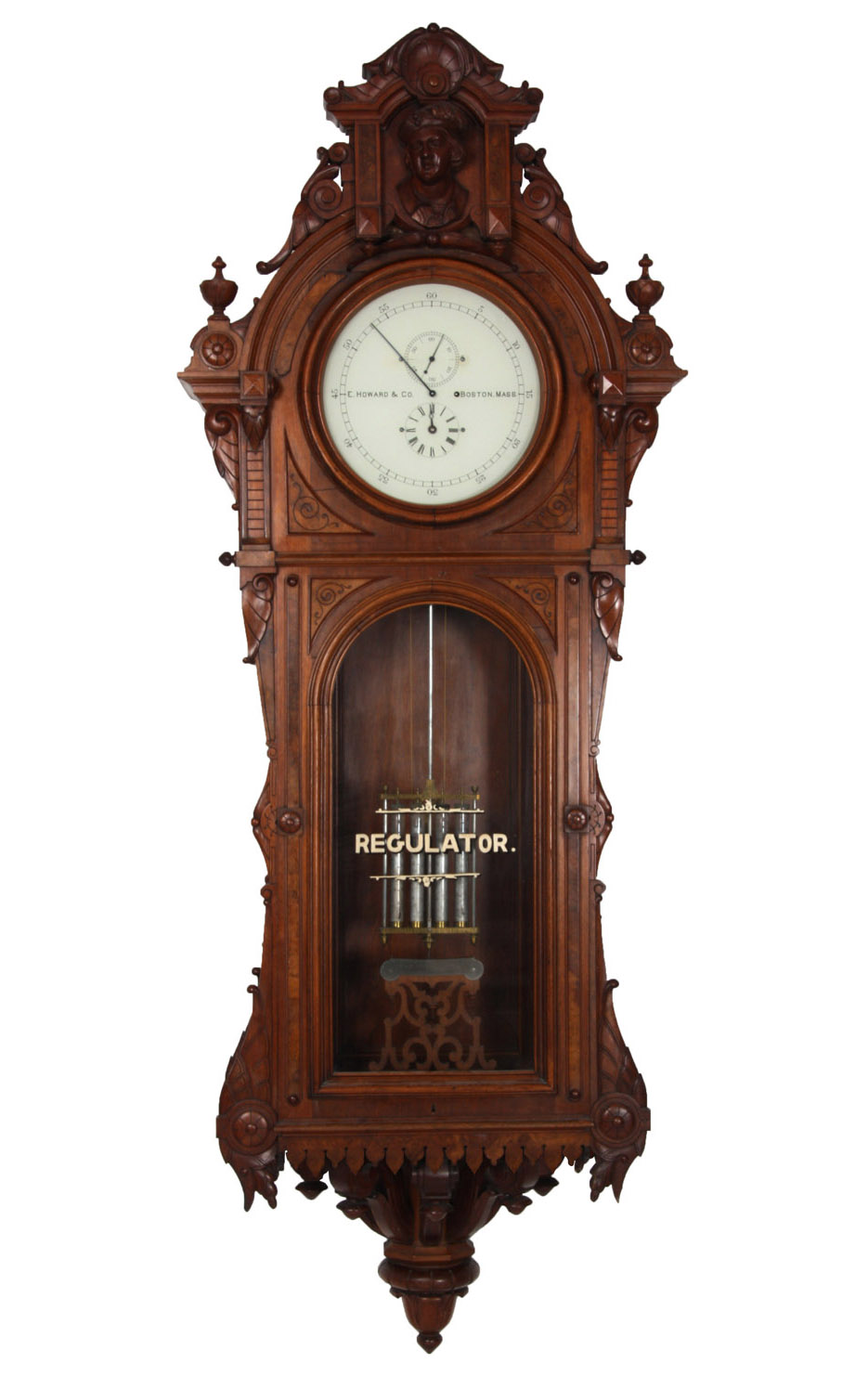 Other record-setting E. Howard regulators that have performed well for Fontaine’s include a No. 68 astronomical regulator clock with a 14-inch bronze astronomical dial in a large carved walnut case having an arched crest with scrolled seashell over a carved maiden’s head. The 105-inch-tall clock earned $277,300 in November 2013. A No. 43 floor standing astronomical regulator clock with a reverse-painted glass astronomical dial, mounted in an elegant and carved walnut floor case with a shell carved crest over a figural maiden’s head made $254,100 two years later. 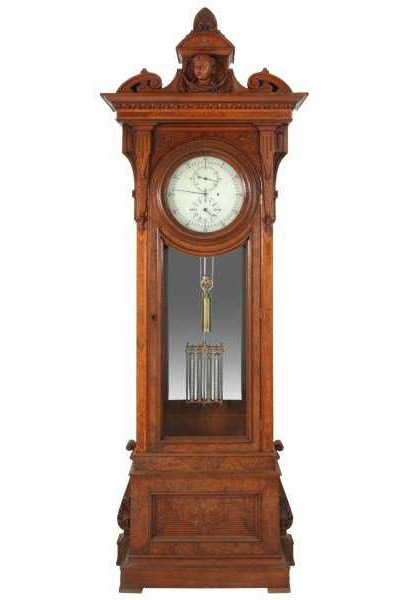 “The E. Howard catalog displays line-drawn images of various case models with reference numbers for each clock as well as the many variations in movements, dials, pendulums, etc., which could often be custom-ordered,” Fontaine said. “It is very well proven, in reference to modern sales results, that some of the finest models focused not only on the quality and rarity of the case, but also the inclusion of astronomical dials and the highest quality precision compensating pendulums.” The astronomical dial, he explained, is a dial that includes complications other than the common center minute and hour hand. E. Howard’s astronomical dials, often made from iron, silvered bronze, zinc and reverse-painted glass, generally display a center sweep minute hand with a sub-hour dial above the center and a sub-seconds dial below the center.
Rare examples, particularly those in original condition, tend to bring the highest prices. Collectors are drawn to original glass tablets and clean original dials, and seek out examples retaining their original finish and wood case. 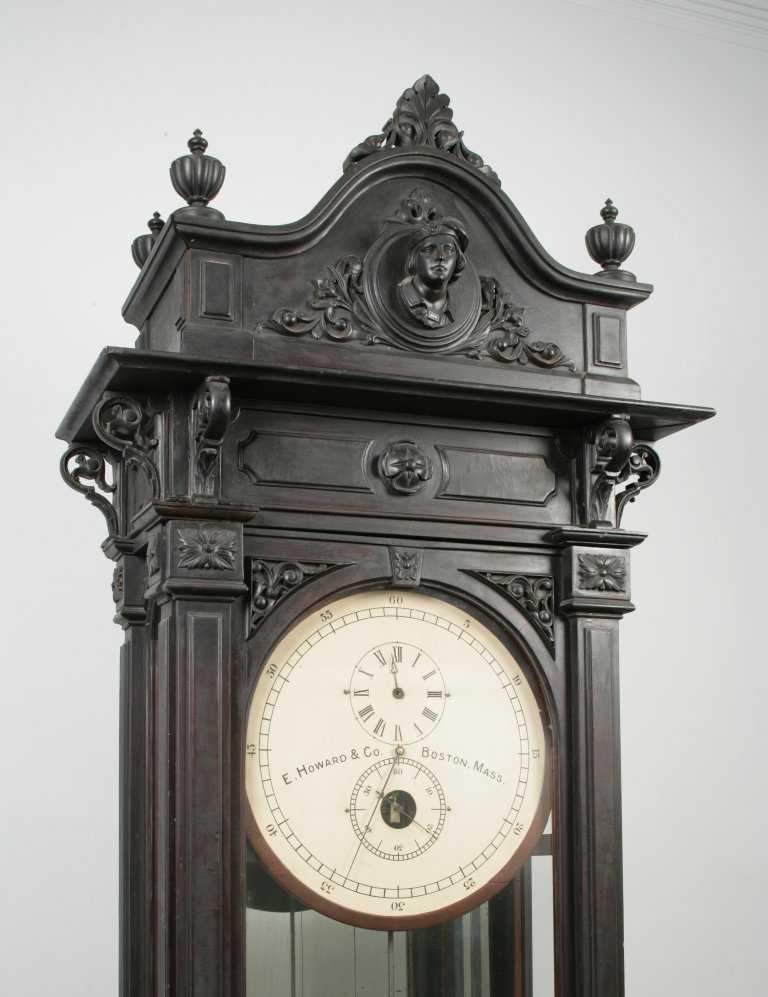 An E. Howard & Co. No. 46 astronomical regulator clock sold for $130,000 in October 2013 at Keno Auctions. Photo courtesy of Keno Auctions and LiveAuctioneers

“Particularly relating to E. Howard’s larger floor and wall model clocks, there were very few produced, therefore the rarity of such a fine-quality timekeeper has enticed our auction market to stay strong through the years,” Fontaine said. “Collectors tend to want the rarest, the best quality and the finest condition when it comes to these clocks, and this ensures a strong market. When we see a certain rare model or specific example, we will often see some of the same collectors who want to trade up or expand their collection.” 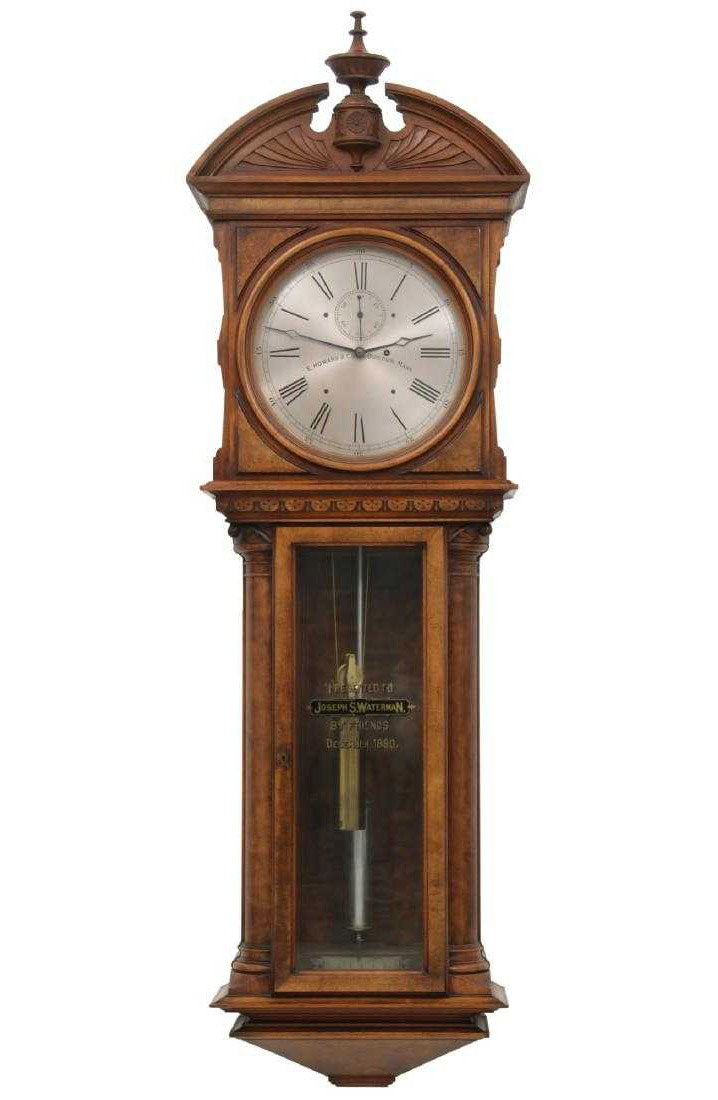 A far cry from many of today’s digital timekeepers that lack the artistic charm of clocks crafted a century earlier, E. Howard regulators make a bold statement in the home and are eagerly pursued by collectors for their scientific accuracy and elegant aesthetic. 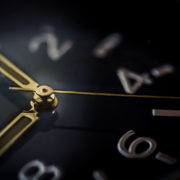