It’s a daunting task, providing the visualizations of humankind’s relationship to the environment. However, maps have been doing the job, and very well, for centuries. Just ask any map collector.

Steve Kovacs, owner of an online map gallery and Jasper52’s Maps expert, said there’s a lot to discover from map collecting that isn’t immediately obvious to the beginning collector. We spoke with him to gain insights from his 5+ decade study and appreciation of geography and maps.

How is the collectible map market at present?

The map market has largely rebounded from the slowdown experienced by nearly all antique markets following the financial crisis of nearly a decade ago. There is now a robust interest and demand for a range of antique maps, from rare finds to more common maps. 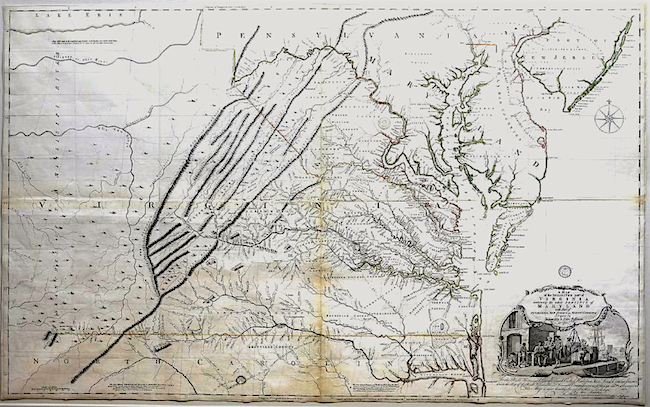 Engraved map of the inhabited part of Virginia, containing the Province of Maryland and part of Pennsylvania, New Jersey, and North Carolina, original first edition hand-color in outline by state, with the title within a fine rococo cartouche, August 1753, by Joshua Fry and Peter Jefferson. Used by French naval and military commanders to plot strategy during the French and Indian War and the American Revolution. One of only four known examples of a first edition. Provenance: personal collection of esteemed French cartographer Jacques-Nicolas Bellin. Sold for $256,250 during the Spring 2017 auction at Arader Galleries. Arader Galleries image

How are maps generally categorized or defined?

The most common categorization is by the geography depicted, of course — such as US maps, Asia maps, maps of Texas, etc. Another way collectors think about maps is by type, such as pocket or folding maps, wall maps, atlases, books with maps, maps of early exploration of a specific region, railroad maps, and so on. Some collectors separately categorize city maps, bird’s-eye views and pictorial maps, which became more common in the early 20th century.

What are some specialities with map collecting?

As with many other collectibles, collectors tend to follow their passion and will stamp their individual interest onto their collection. With that said, there are some more commonly followed themes. For some, maps are works of art, especially pre-19th-century maps full of vignettes and allegorical figures. These collectors will collect maps based on aesthetics and perceived artistic value. Many collectors will focus on specific geography that is relevant to them, such as their residence, heritage and so on. Similarly, some collectors will focus on a particular period of time, e.g., pre-18th-century; or a specific map type or theme, such as maps from the US Revolutionary war. Often collectors grow into being generalists, meaning they’ll collect all types of maps. 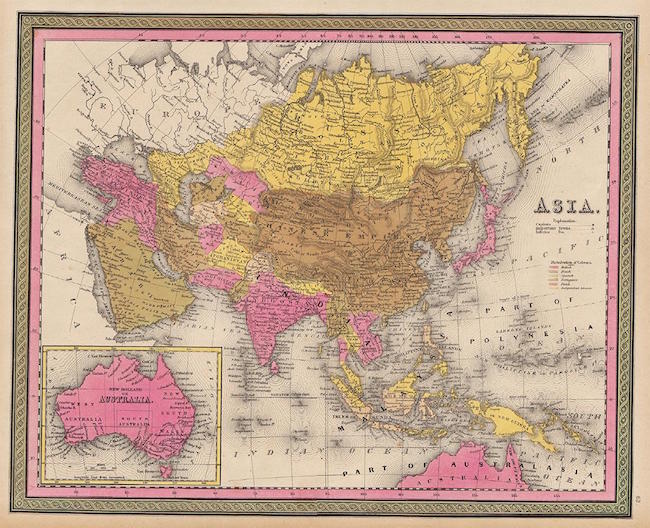 Which features/elements of maps impact value and prompt collector interest?

As with other forms of art and antiques, there isn’t a rigid formula that helps to define value or potential interest. Value is typically a function of uniqueness, desirability, rarity, age, map size, cartographer, artistic impression, which includes coloration; and condition. The first map to capture a specific geography is likely to be more valuable than a later rendering of the same area. There are maps that just generate lots of interest, and thus are more valued by collectors. Age correlates modestly with value, but there are maps from the 1600s that routinely sell for well under the price of some maps from the 1800s. Condition is very important, especially for maps that are more common. Ultimately, value and interest will be driven by collector demand, which in turn is influenced by the elements previously mentioned.

Are there particular types of maps that are more available and/or affordable?

Printing and papermaking technological advancements took a huge leap in the 19th century. As a result, map production became less expensive and the supply of post mid-19th century maps became larger. Many maps of this era are very affordable — such as maps by prolific cartographers including Tallis, Colton and Mitchell. However, there are much older maps that are very attractive, cover virtually all geographies and have sufficient supply to warrant lower prices — Belin’s maps from the mid-1700s are examples of this. 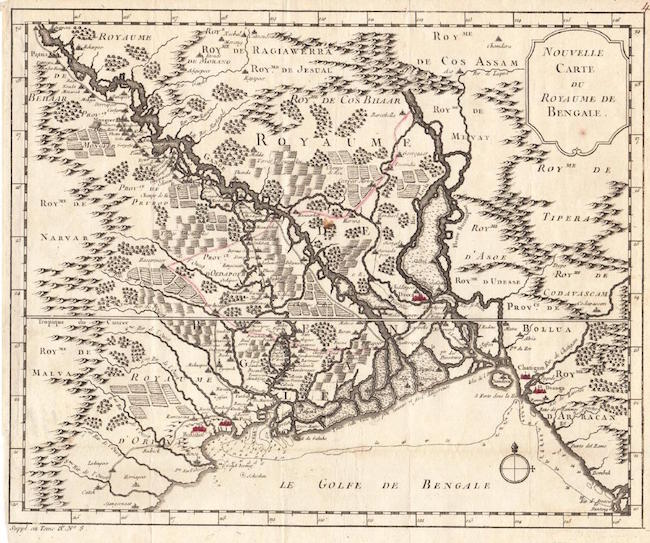 Nouvelle Carte du Royaume de Bengale, engraved map of modern Bangladesh and the Ganges delta, by cartographer Jacques-Nicolas Bellin, 1760, is one of 101 maps featured in the Antiquarian Maps of Asia auction to be presented by Jasper52 on Sept. 2. Estimate $50-$60. Jasper52 image

What are some of the places to find maps? What factors should people consider when looking to purchase an antique or vintage map?

Antique maps are generally available at auctions, from map-specific dealers and at some antique book dealers, as well as general antique stores, especially in tourist destinations. As one would expect, prices tend to be lower at auctions, where less business overhead needs to be covered by the price. Dealers have acquired knowledge and expertise, which transfers to credibility for serious collectors. Given the importance of reputation in specialty or niche businesses such as antique maps, most places selling or auctioning maps will give the buyer a fair deal. When looking to purchase an antique map, I would suggest focusing on the item itself first – will it fit your collection? – then on value.

What is the price range that beginners should expect to pay as they begin their map collection?

The amount of money a collector is willing to spend is a highly personal decision. With that said, a collector can start with excellent maps under $100 and add to his or her collection as maps of interest are available within their given budget. As the collection grows, many collectors gain confidence in their understanding of antique maps and tend to invest in more expensive, rarer maps, often exceeding $1,000 in price. The key is to have fun and enjoy your collection. Finally, I should add that a collector will also need to determine whether they plan to keep their entire collection or will they rotate their maps, selling some off over time.

What are some of the condition factors that can impact the collectability of maps?

As noted previously, condition is very important, as with other antiques. Condition statements typically focus on the map itself and less on the margins. Discolorations, foxing (small spots caused by impurities in the paper stock), mold or water stains/spots, toning (yellow/browning of the paper stock), tears/splits, missing portions, and excessive folds are examples of quality defects or poorer condition. As common sense would dictate, the poorer condition is somewhat ‘forgive’ for rare maps, but more-common maps in poorer condition will have a lower value. Finally, there isn’t a universal condition-grading system; rather, most dealers rely on giving an opinion of the map’s condition, although some will also use their own grading system. 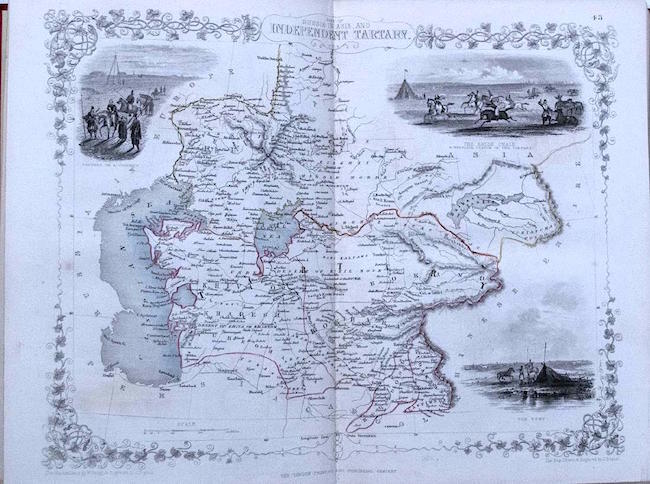 Lot of three maps of Russia in Europe, and Russia in Asia, featured in the book The History of Russia containing Russia in Asia: Part of Russia and Independent Tartary: Russia in Europe Showing the Terretorial Acquisitions Since the Time of Peter the Great, by cartographer John Tallis, 1851. Hand-color in outline map is illustrated with six portraits/scenes that include czars. Estimate $225-$250. Jasper52 image

How did your interest in maps develop? What do you enjoy most about maps? Is there a map you’ve come across or have within your collection that is considered a favorite?

I was drawn to geography from an early age, as geography helps explain man’s relationship to man’s environment, and maps are visualizations of that relationship. In many ways, maps tell stories. I most enjoy maps representing early explorations, such as early maps of the Americas or Asia. In those days, cartographers felt compelled to use their imagination to make an educated guess of part of the topography pictured… and they tended to get this only partially right. One of the first maps I received was a Christmas present from my wife and shows the area of the world that my family comes from. Of course, that one won’t be for sale!

Steve Kovacs has been passionate about geography and maps for five decades. His interest has taken him from studying and collecting maps to opening a boutique online map gallery. He also enjoys putting his knowledge of maps to use for his global travels – he’s visited 55 countries so far. He also has a background in science, engineering, and business. He is a member of the International Map Collectors’ Society and serves as the expert curating Map auctions for Jasper52.

6 Fine Jewelry Pieces Waiting For You
Scroll to top