Charles Dickens once wrote, “A very little key will open a very heavy door.” And a small cast-iron doorstop can keep it ajar while also being stylish and collectible.

According to the Encyclopedia Britannica, the advent of modern cast-iron doorstops came about in the mid-18th century, when a type of hinge was added to doors to allow for automatic closure. A door that closed by itself was undoubtedly a helpful innovation, however, there were times when an open door was necessary and desired. Enter the doorstop.

Doorstops of brass or other metals were commonplace in the early part of the 18th century, but it was the use of cast iron in the production of doorstops that changed the trajectory of stops, also known as chucks, wedges and blocks, among other things.

The first doorstops were not fanciful in design, but it didn’t take too long before figural images became standard in doorstop production. As was the case with more than a few objects of the past, being utilitarian didn’t mean visual appeal had to be sacrificed. They could blend harmoniously. 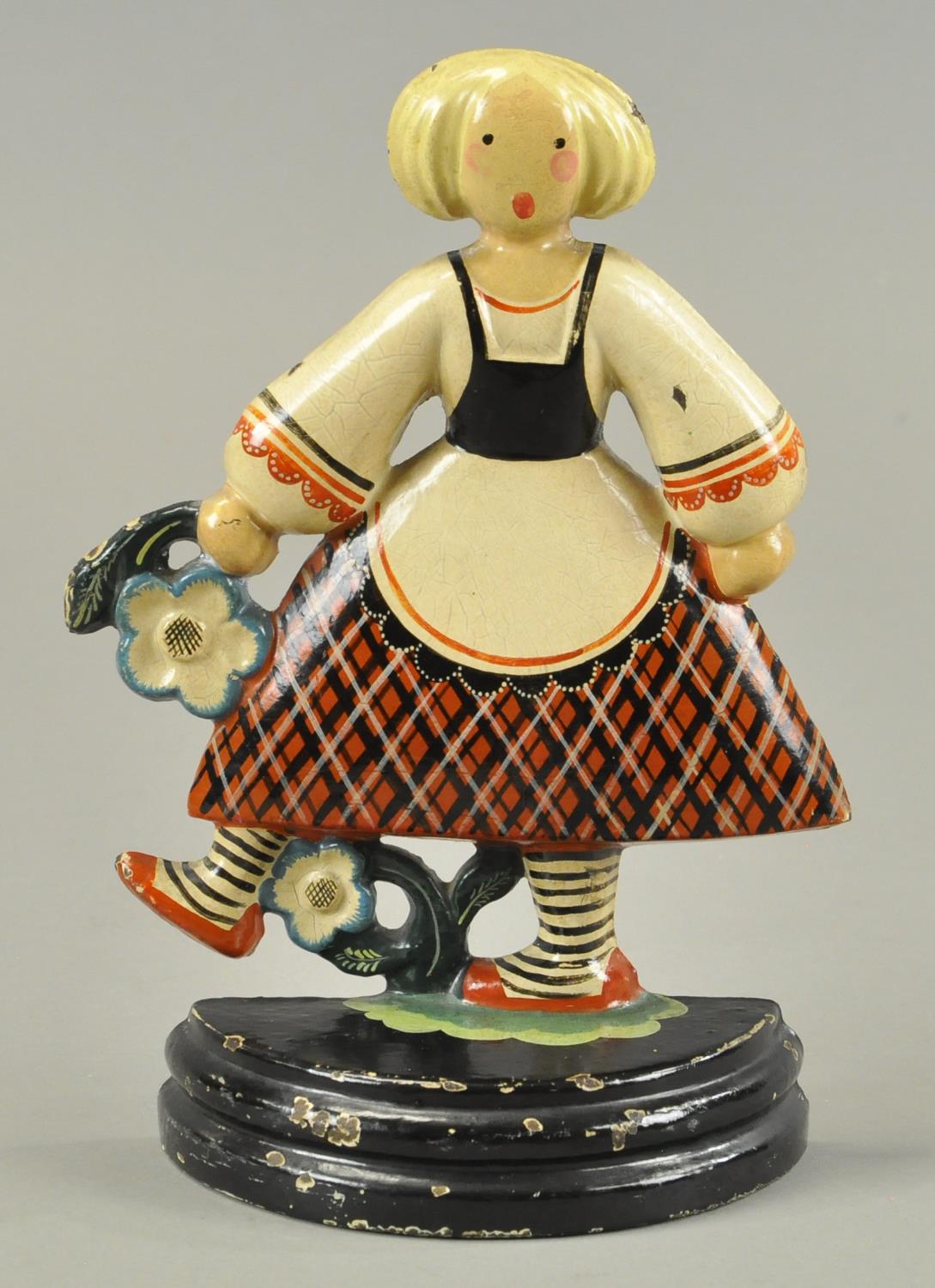 Sought-after hand painted casting of a young girl stepping over flowers, strong retention of paint, one of many variations of this doorstop created by Littco Productions (est. $1,800-$2,500). Lot #112 in Bertoia Auctions’ Nov. 11 sale. Bertoia Auctions and LiveAuctioneers image

The versatility of figural doorstop design also lends to its appeal among collectors of other types of objects. A perfect example of crossover collectibles, figural doorstops boast designs related to everything from Americana, nautical and floral themes to entertainment characters, folk art, animals and nature.

COLLECTING TIP – Many vintage models of original doorstops have a smoother casting, as opposed to a rougher surface that is sometimes seen in reproductions.

Several companies have produced doorstops over the past two centuries, and in many instances, doorstops were a secondary, albeit successful, sideline. Among the most prolific producers were Bradley & Hubbard, Hubley, Littco, and Judd Co. Also, one of the revered designers of doorstops was Anne Fish. Here we’ll look at the contributions each made to doorstop history.

When Nathaniel and William L. Bradley, Walter Hubbard, and Orson and Chitten Hatch formed a partnership in 1852, the focus of their output was clocks. Just two years later, the Hatch brothers stepped away, leaving the Bradley brothers and Hubbard to move forward as Bradley and Hubbard. While production of clocks remained the company’s top priority, they expanded operations to manufacture call bells and sewing machines. The company also made flags, hoopskirts and match safes, all within the first few years of operation. In the years that followed, the company became a leader in the production of kerosene lamps and architectural elements, including grilles, railings, fences, doorstops, and lighting fixtures. The company was sold to Charles Parker Company in 1940. Although it’s hard to determine precisely when the Bradley and Hubbard division of the Parker Company ceased to operate, but by 1950 there was no longer any mention of the division in the company’s product catalogs.

Located in a region known for iron mining during the 19th century, it’s no wonder that in 1894 the Hubley Manufacturing Company in Lancaster, Pennsylvania, would become involved in cast iron production. Hubley was an early manufacturer of cast iron toys. Hubley cast iron toy vehicles were popular when they were new, and are even more so today as collectors’ items. Applying some of the techniques and processes used to produce cast-iron toys proved profitable for Hubley when it ventured into doorstops. Molds were used in the mass production of doorstops, but each was painted by hand. Many subjects were depicted in Hubley’s doorstops, and they were especially well known for their dogs. There were few canine breeds overlooked by Hubley, and in each case, great attention was paid to the small details. Other motifs of Hubley doorstops popular with collectors are flower baskets, nautical themes, and other types of animals. 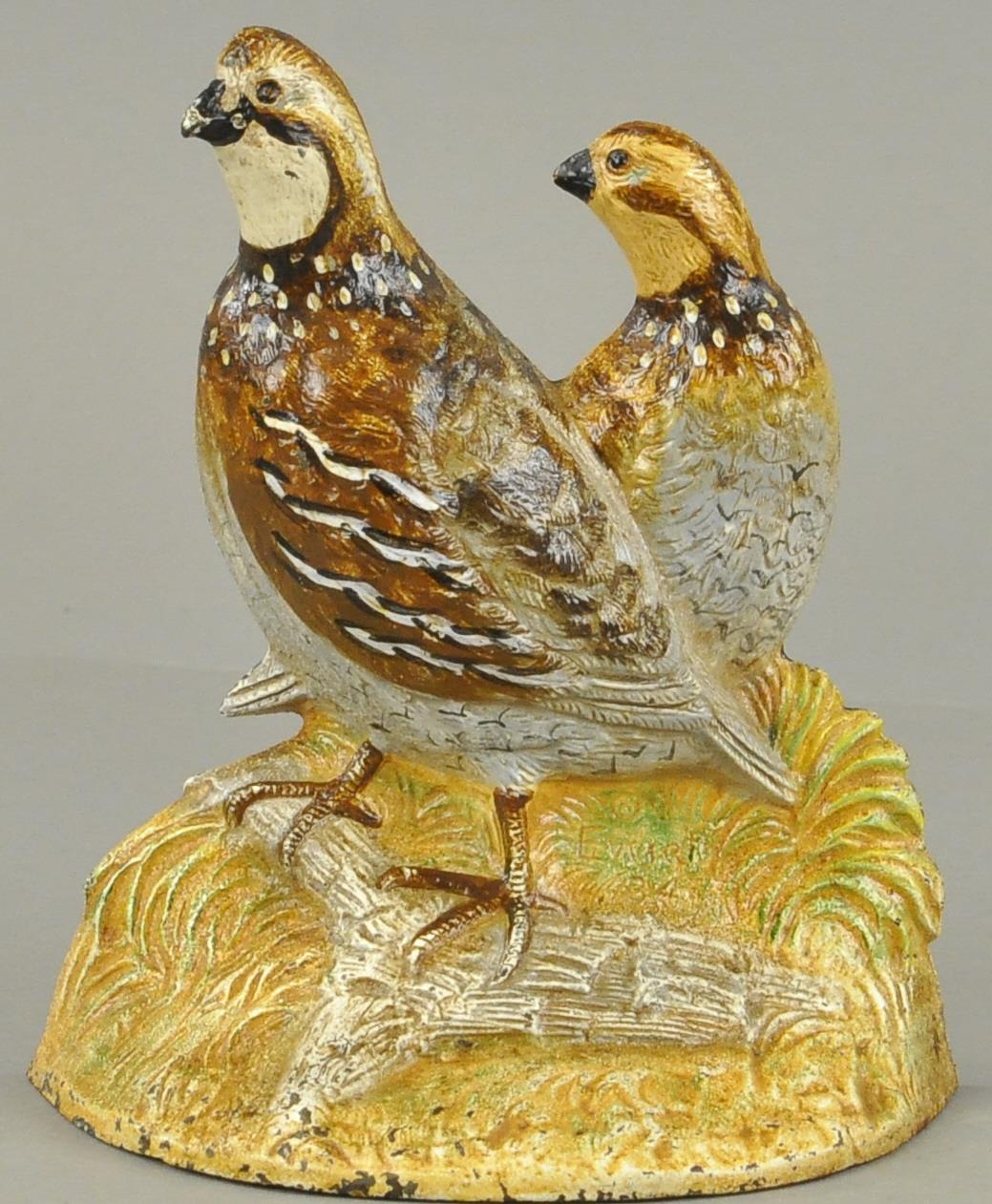 Littco: Beginning as Littlestown Hardware and Foundry Company, Inc., in 1916, the unit known as Littco Productions was responsible for producing decorative cast iron doorstops and bookends, hammers, and fireplace accessories, among other items. The creation of decorative cast-iron objects, including doorstops, was a big part of the firm’s business until the early 1940s. World War II, changed the company’s focus, as it did for many manufacturers. Much of the company’s output would now support the war effort. The company did iron casting until 1990, when its operation turned to aluminum casting, as it remains today. 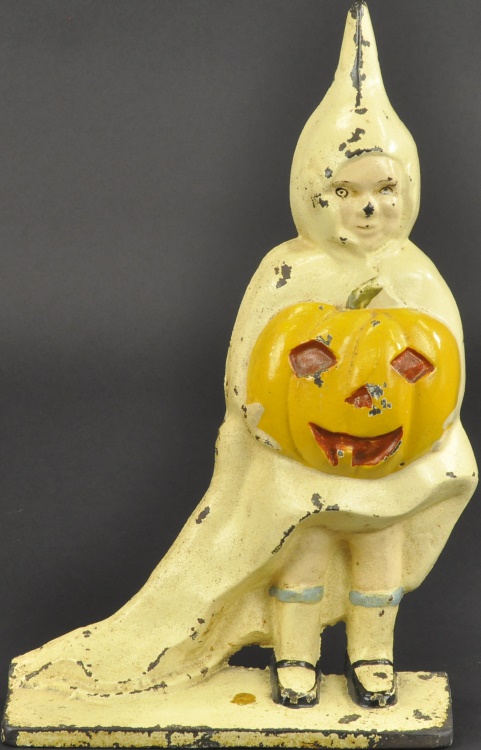 One of only four known original Halloween girl cast-iron doorstops made by Littco Products, provenance: the Jeanne Bertoia Collection, sold for $29,500 during a March 2016 auction at Bertoia Auctions. Bertoia Auctions and LiveAuctioneers image

Judd Manufacturing Company: Doorstops made by this Connecticut-based company often bear a maker’s mark of “cjo,” and carry with them a rich history of casting in iron, brass, and bronze. The company established itself in 1933 as a harness manufacturer. Ownership and production lines changed as the 19th century progressed. In 1910, the company began manufacturing bookends, book racks and doorstops, among other objects. These production lines continued until the late 1930s. 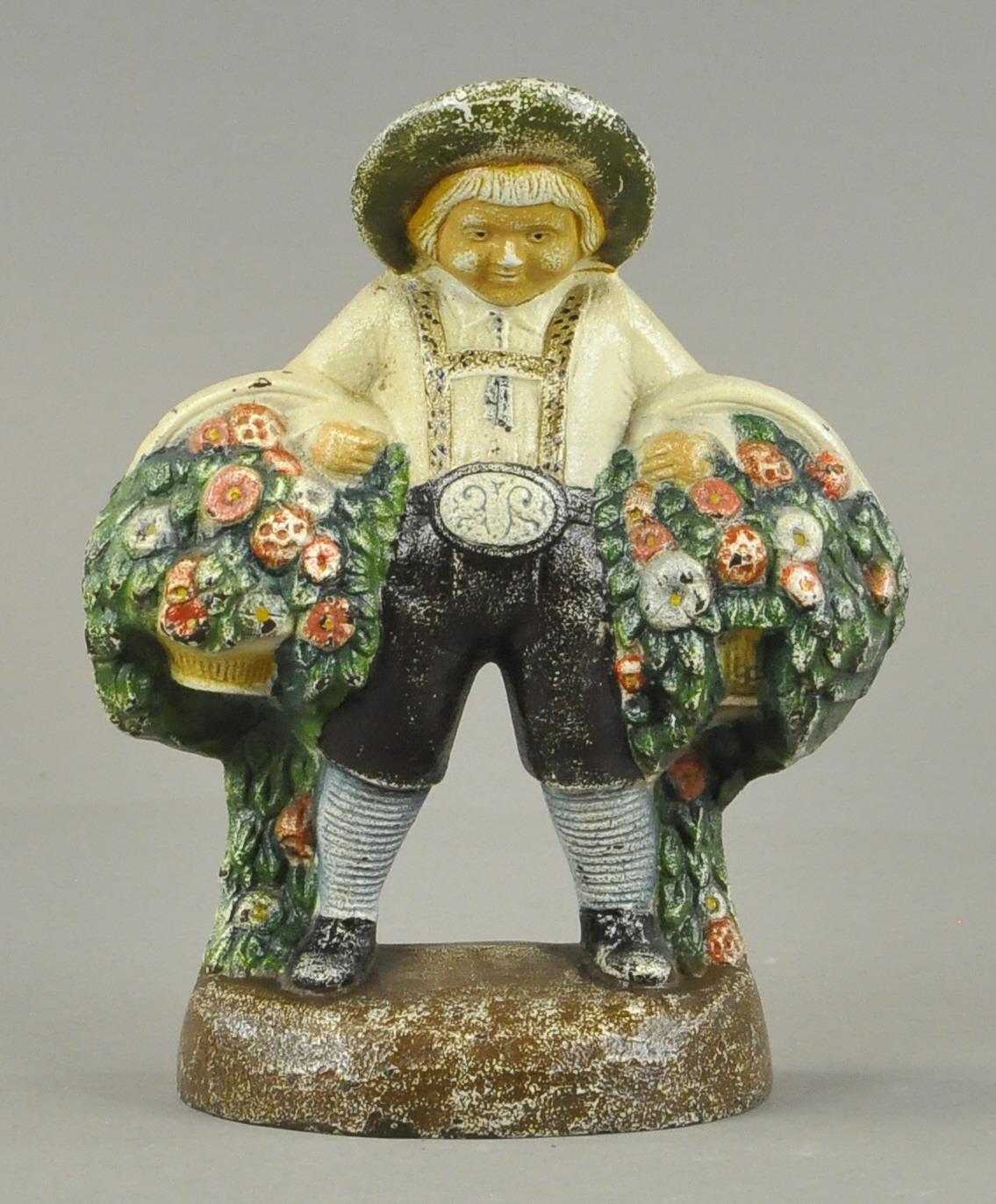 COLLECTING TIP – View as many collections and presentations of doorstops as possible, to become familiar with the look and style of various manufacturers. A great place to view a significant number of doorstops is http://www.BertoiaAuctions.com. Jeanne Bertoia, owner of Bertoia Auctions, amassed one of the most admired of all doorstop collections, and she is considered one of the top experts in the field. Bertoia Auctions continues to bring premier doorstop collections to auction. For example, more than 55 of the more than 1,300 lots in Bertoia Auctions’ Nov. 11-12 Signature Sale are doorstops.

Anne Fish: With her considerable talents as a cartoonist and illustrator, British artist Anne Harriet Fish expanded her artistic repertoire by working with both the Fulper pottery works and the Hubley company. Her application of Art Deco style can be seen in various examples of Hubley cast-iron works, including doorstops. Fish-designed doorstops are among the most sought after by today’s collectors.

Even in the age of central air conditioning, vintage doorstops still have a place in the home, whether the objective is to prop open a door, to add a decorative touch to a room – or both.