A lot can happen in 170 years. In fact, quite a lot has since jeweler Louis-Francois Cartier took over at the Paris shop where he was an apprentice, following the death of master jeweler Adolphe Picard. While brands have come and gone as the global marketplace has evolved, the popularity of Cartier jewelry and watches has remained strong. Talk about staying power.

A significant reason for the company’s relevance, especially in its first century operation, was due to the visionaries within multiple generations of the Cartier family. This is most evident in the company’s masterful watchmaking. 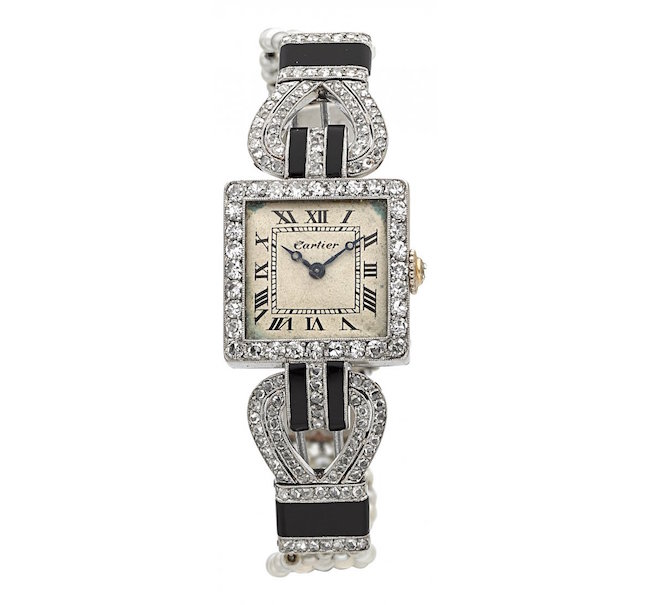 This Cartier watch exemplified the influence of Cartier’s roots in fine-jewelry design. The platinum Art Deco ladies watch, circa 1915, features a “panther” design diamond and onyx on the setting and band, as well as graduated pearls on the band. The timepiece is a creation of Cartier and European Watch & Clock Co. It sold in a 2016 Heritage auction for $42,500. Heritage Auctions image.

Cartier’s History: By the time Henry Ford had introduced the Model T automobile, created in an assembly line and available at a price more Americans could afford, Cartier’s watchmaking operation was already in its 20th year. When men were starting to get behind the wheel of a Model T, in 1908, their driving attire might have included Cartier’s Tonneau wristwatch. And if they were particularly well connected, they might be able to acquire the Santos, which was not readily available to the public until 1911.

Cartier quickly became well known in European high society and abroad for creating lavish and unique items of jewelry. Applying the same approach the firm used in designing jewelry, Alfred Cartier (Louis- Francois’ son) expanded the company’s line to include timepieces. As explained in an introductory video on the Cartier website, the company’s foray into watches began with fob and chatelaine watches for women, followed in 1888 by the first ladies Cartier wristwatch. Alfred wasn’t alone in this timekeeping venture; by the turn of the 20th century, all three of his sons (Louis, Pierre and Jacques-Theodule) had joined the family business.

However, working side-by-side in the company’s Paris headquarters wasn’t the Cartier family’s vision for the future. By 1910, the three sons were overseeing Cartier’s overseas branches in London and New York. Cartier remained a family-run operation until 1964, following the passing of Pierre. Louis and Jacques both had predeceased their brother in 1942.

Classic Cartier: In the 21st century, Cartier is owned by Richemont, a conglomerate that owns other luxury brands including Van Cleef & Arpels, Jaeger, Vacheron Constantin and Piaget. More than nine decades ago Cartier was partnering with each of those companies, producing “white-label” watches to be sold under their own brand names, according to Collectors Weekly. One of the earliest and most innovative partnerships in Cartier’s history was with Jaeger, the company behind the movements in Cartier watches.

There’s no mistaking the influence and appeal of Cartier watches. Let’s look at four of the company’s notable styles: 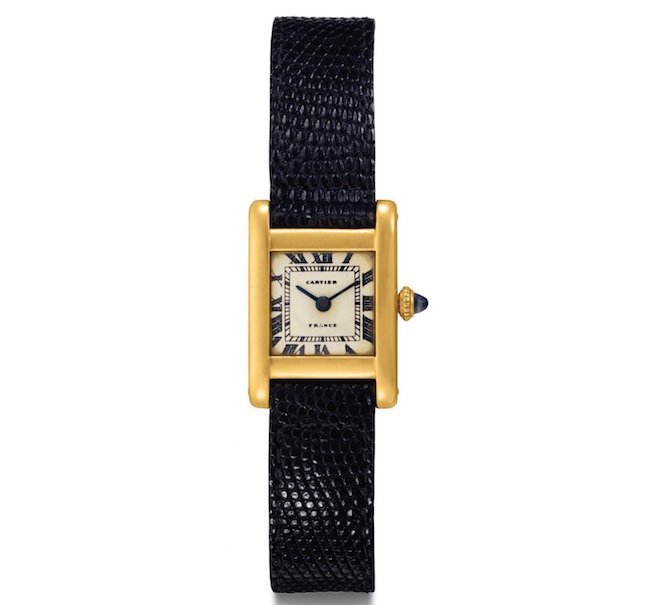 A square-shape 18K gold Cartier Tank, circa 1962, gifted to Jacqueline Kennedy in 1963 and worn regularly, was part of an affinity lot that sold for $379,500 at an auction presented by Christie’s in June 2017. Christie’s image.

1. Tank: This year marks the 100th anniversary of this iconic Cartier model. Various historical accounts attribute the name and styling of the watch to the military armament by the same name first used during World War I. The first examples of this watch were given by Cartier to members of the American Expeditionary Force, according to A Blog to Watch.

As is the case with many sought-after collectible items, the stories and provenance related to the antique and vintage watches undoubtedly add to their appeal at auction. This was evident recently, when a Cartier Tank wristwatch owned and regularly worn by Jacqueline Kennedy more than doubled its estimate at a summer 2017 auction at Christie’s.

According to Christie’s auction preview, Mrs. Kennedy’s watch was a gift from her brother-in-law Prince Stanislaw “Stas” Radziwill, husband of her sister, Lee Radziwill. The watch’s engraving adds to its historic relevance. It bears the engraved inscription, Stas to Jackie, 23 Feb. 1963 2.05am to 9.35pm. The words correspond to the date and duration Radziwill and friends spent completing a 50-mile hike at Palm Beach, Florida. The hike was tied to President Kennedy’s aims to make America a fit nation by making health and wellness a priority. The first lady and her sister were driven to a section of the hike to meet up with the walkers, and at various points during the hike, President Kennedy was also said to have joined the endeavor.

Radziwill’s gift was not the only gift commemorating the event. The first lady created a painting depicting Radziwill and one of his friends on the hike and inscribed it similarly to what is seen on the watch: February 23, 1963 2.05am to 9.35pm /Jackie to Stas with love and admiration. The painting, paired with the watch, formed the lot that sold for $379,500 at Christie’s June 21, 2017 auction. 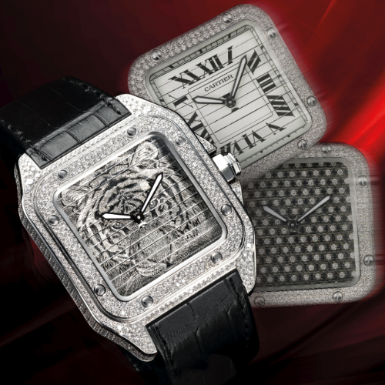 2. Santos: As Cartier history reveals, this famed watch model (the company’s first style for men) came about as a solution to a friend’s problem. The friend was noted aviator Alberto Santos-Dumont. The issue he relayed to Louis-Francois Cartier was the frustrating challenge of accessing his pocket watch while at the controls of a plane. Cartier went to work and in 1904 approached Santos-Dumont with a watch that had an easily visible face, sat flat on the wrist and was held in place by a strap and buckle. In no time, the watch – which Cartier named the Santos – also became known as a pilot’s watch, according to Monochrome. The watch was made available to the public in 1911.

3. Tonneau: One of the earliest readily available wristwatches created by Cartier, the Tonneau appeared on the market in 1906. Named for the shape of the case (tonneau is French for barrel), it was an incomparably sophisticated design for the time. This model of Cartier watch was introduced during the Belle Époque period, an age during which Cartier’s watchmaking business flourished.

4. Crash: Steeped in urban lore, this model of Cartier timepiece was inspired by the result of an accident, or heat exposure, or possibly Salvador Dali’s Persistence of Memory. According to an article by George Cramer for Revolution.watch, it was 1967 and Jean-Jacques Cartier, the head of Cartier’s London office at the time, designed the Crash style of watch after seeing a warped Cartier timepiece. Regardless of the source of inspiration, the radically uncommon watch captured the world’s attention. Three times in the years since its debut (1991, 1997 and 2013), Cartier has released limited-edition versions of the Crash watch. This year marks the 50th anniversary of the Cartier Crash and chatter on horological sites is rife with speculation (perhaps hopefulness) about a re-release of the Crash in 2017. 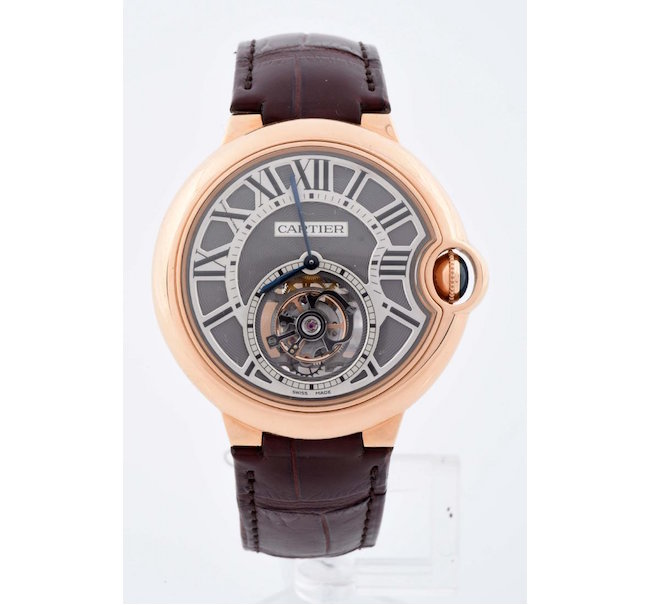 5. Ballon Bleu de Cartier: This Cartier model appeals to both men and women, making it modern choice. The shape of the case is circular, with both the top and bottom featuring a rounded design. Another uncommon design element of the Ballon Bleu is the inclusion of a guard over the traditional Cartier sapphire cabochon crown.As historical records demonstrate, the connection between Cartier and royalty dates to the company’s earliest years, when King Edward VII of England famously referred to the company as “the jeweler of kings and the king of jewelers.” Today, that connection continues, as England’s Duchess Kate Middleton is often photographed wearing a Ballon Bleu Cartier watch. 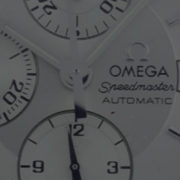 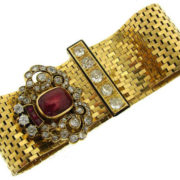 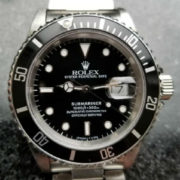 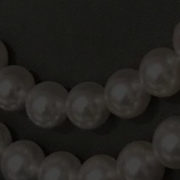 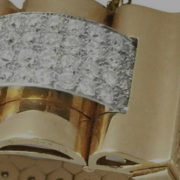 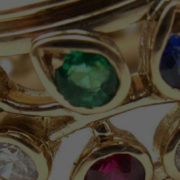 Cartier among top names in online auction Oct. 13
A Star-Studded Collection of Prints