NEW YORK – Of all the American woodworkers and furniture designers of the 20th century, perhaps none were at once as celebrated and humble as Sam Maloof (1916-2009), the son of Lebanese immigrants who was born in California and lived and worked there his entire life. The accolades were many: in 1985 he was awarded a MacArthur “Genius” grant, the New York Times called him “a central figure in the postwar American crafts movement,” the Smithsonian Institution declared him to be “America’s most renowned contemporary craftsman” and People magazine dubbed Maloof “The Hemingway of Hardwood.” His furniture resides in the collections of many American museums.

But if anyone attempted to call Sam Maloof an artist, he would quickly correct them. “I am a woodworker,” he would say with typical humility. “I like the word. It’s an honest word.” Maloof worked with wood starting as a child, making a spatula for his mother, plus dollhouse furniture, cars and other toys. In 1948, he and his wife, Alfreda, moved into a house in Ontario, California, where he set up a furniture workshop in the garage. Having little money, he designed and built a suite of furniture for the home, mostly made of salvaged materials and discarded packing crates. 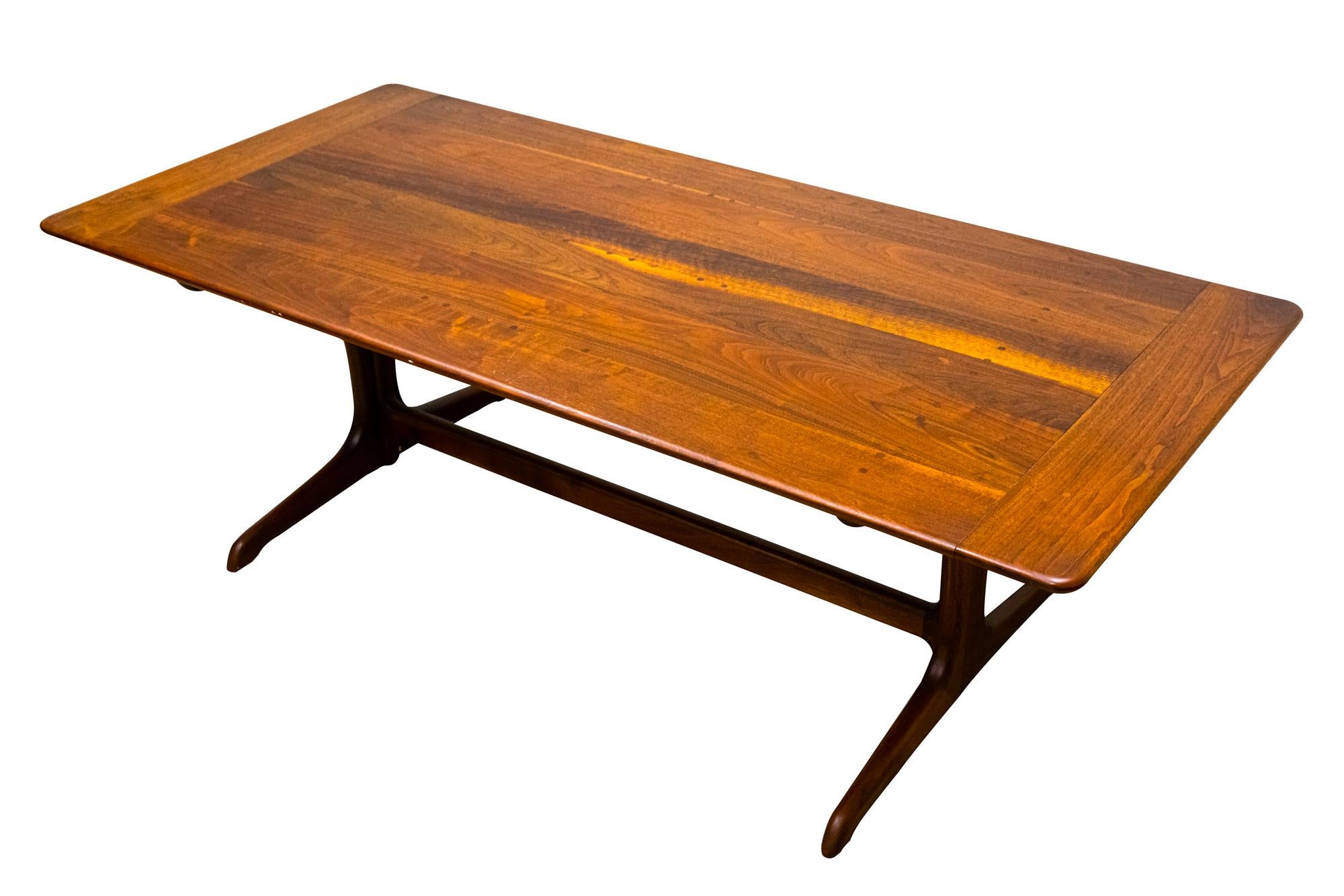 Word spread of his creations and commissions began pouring in. A friend, Henry Dreyfuss (the noted industrial designer of such classics as the Singer sewing machine and the Hoover vacuum cleaner) commissioned Maloof to make 25 pieces for his Pasadena home. The rocking chair he designed for Dreyfuss was an instant hit and was soon found in the chicest homes – including the White House. Jimmy Carter and Ronald Reagan had rockers made by Maloof in the Oval Office. Carter signed a photograph to Maloof, “to my woodworking hero,” in a visit to Maloof’s home.

Maloof’s style was to put function over form, usefulness before artistry. His modern furniture was assembled entirely out of wood (he preferred claro walnut, cherry, oak, rosewood and yew) using no nails or metal hardware at all. These were a perfect fit for the minimalist homes of the postwar period. “He was trying to make other people appreciate what it was like to live with a handcrafted object in which there was a kind of union between maker, object and owner,” according to Jeremy Adamson, author of the 2001 book The Furniture of Sam Maloof. 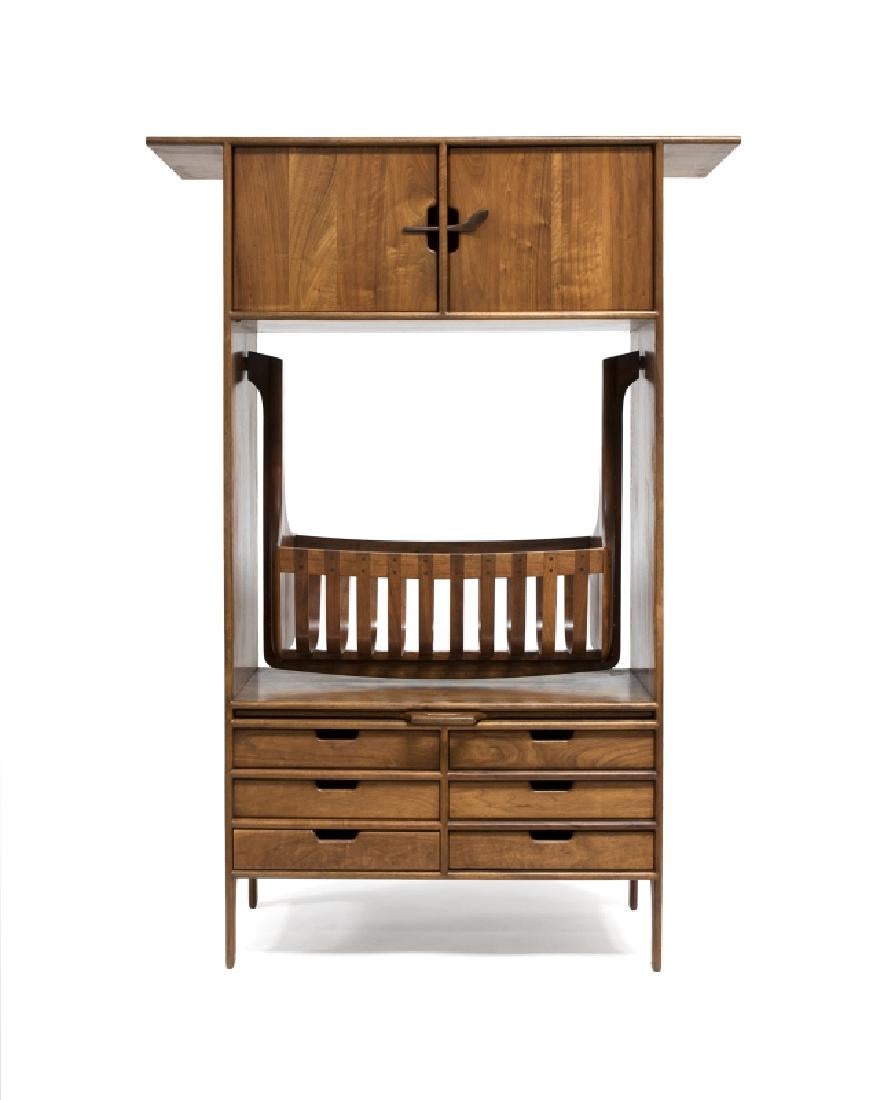 ‘Cradle Hutch’ made in 1971 by Sam Maloof, one of six made, walnut construction, a freestanding cradle hutch with a rectangular outset top over a double-door blanket cabinet secured with a shaped wooden latch, raised atop a central space suspending a slatted rocking cradle over a pull-out changing surface, 80¾in x 58in wide, sold for $43,750 at John Moran Auctioneers on April 25, 2017. Image courtesy of John Moran Auctioneers

Maloof’s chairs, for which he is most famous, have a sculptural quality about them, yet are also very ergonomic and austere in their simplicity. They can be characterized by completely rounded over corners at mortise and tenon joints (which are always plainly visible); carved ridges and spines, particularly on the arm rests; decorative ebony dowels; deep, dished-out seats (always made from several boards glued together); and clear finishes. Everything he made – chairs, cradles, hutches and other furniture pieces – were designed and crafted entirely by hand.

“Sam Maloof’s work is timeless; it is subtly modern and surprisingly sophisticated,” said David Rago, a partner and co-director of 20th /21st Century Design Development at Rago Arts & Auction in Lambertville, N.J. “While his famous rocking chair has a lyrical expression of line, the magic of Maloof’s designs can be found in the details – the expertly formed joints, the finishing of the edges, the graining and beauty of the planks, and his use of proportion.” 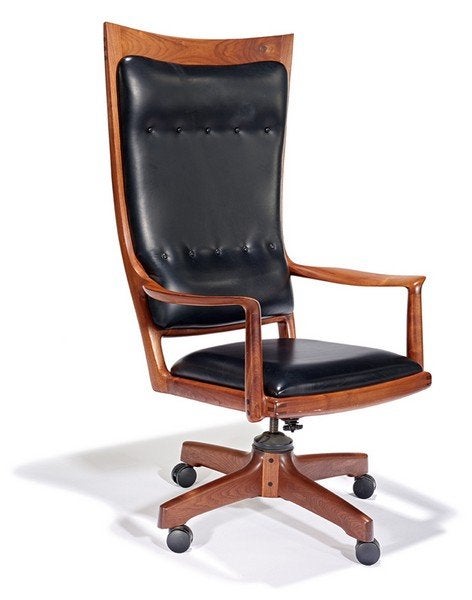 Together, these details reveal a mastery of material and form, Rago said, resulting in works that are simple but refined and work in any interior. “I should add that he chose the discipline of a rocking chair as his cornerstone form,” he pointed out. “They are deceptively difficult to make, and yet part of the furniture vernacular for centuries. At one, a rocking chair is basic and functional, but brought to the level of high art by Maloof’s genius as a craftsman and designer.”

“A few years ago, we had a Sam Maloof bench here in the showroom,” said Wade Terwilliger, president and marketing director of Modern Auctions in West Palm Beach, Fla. “I recall the woodworker we use – who’s normally pretty reserved – sharing with me at length his awe of Maloof’s craftsmanship. I’m sure some of the humility in Sam’s self-described title of simply “woodworker” is related to his background as the hardworking son of immigrants, but I think there may be more to it than that. The title directs your attention to what he considered most significant – the working of wood.” 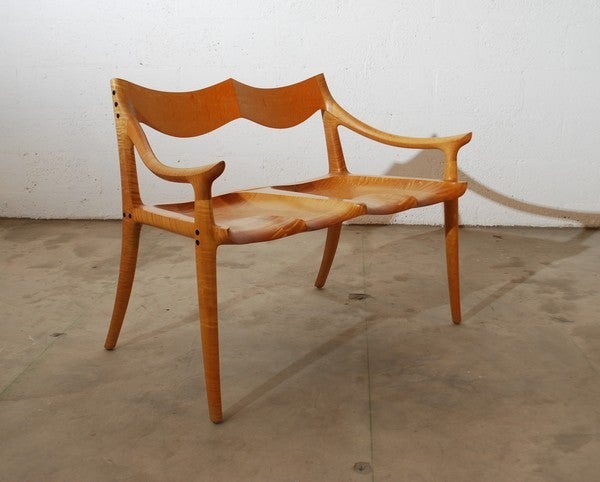 Terwilliger said Maloof’s pieces are shaped and finished to draw attention to the inherent beauty of the grain. “Wood is both the medium and the subject of a functional sculpture, without disguise or ornamentation,” he explained. “For example, the ebony dowels Maloof often used to join pieces together remain visible, providing color contrast, but are fully smoothed over and integrated into the chair’s form. It’s clear that great effort and attention to detail went into creating something so seemingly simple.”

“Furniture by Sam Maloof continues to resonate with collectors of all kinds as it is sculptural, visually pleasing, timeless and easy to use,” said Jason Stein, director of Modern Decorative Art + Design at Bonhams in Los Angeles. “I once heard him described as ‘a craftsperson’s craftsman.’ The woods he worked with were incredible and his pieces were known to be technically precise and beautifully finished.”

“The market for Sam Maloof designs has been consistent for the past decade,” David Rago said. “It’s strong, but not quite ‘hot.’ Given the relatively small number of works produced, his prices are very fair, generally ranging from $5,000 to $50,000. An interesting comparison is the market for the work of George Nakashima, for which there are over 5,000 auction results with a top price of $800,000. There are only 370 auction results for Sam Maloof and only one lot – a complete dining set – has achieved a price over $100,000, and that was more than a decade ago.” 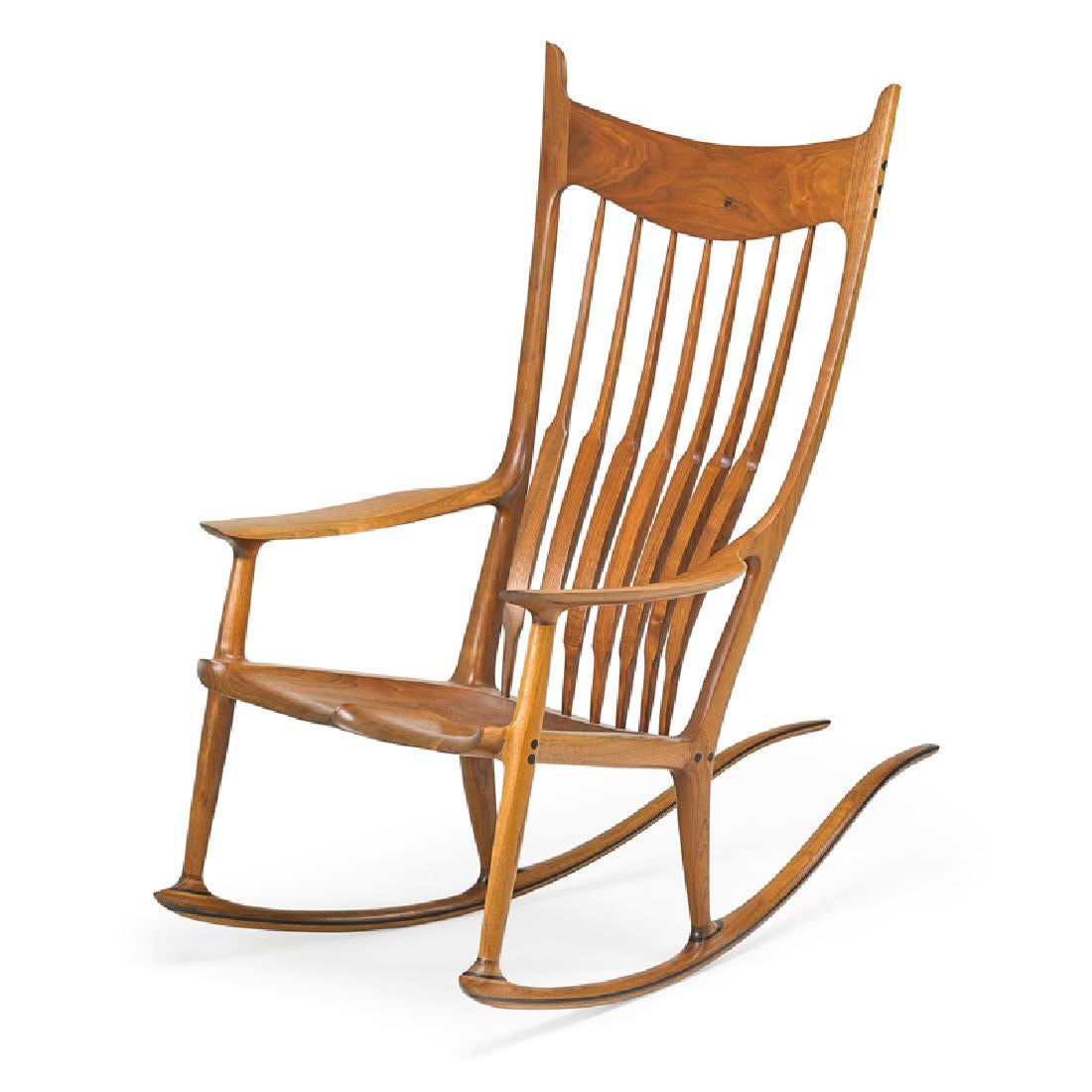 It’s hard not see the relative value in the beautifully crafted works of Sam Maloof, Rago said. “That said, the rarity of Maloof’s work counter-intuitively serves to keep prices down because there has never been sufficient availability to generate a broad market. Phil Powell, the New Hope furniture designer, perhaps made a thousand pieces in his lifetime. Though working at the same time as George Nakashima and Paul Evans, in the same town, George and Paul are said to have produced between 35,000 and 40,000 pieces.  The relative paucity of Powell’s surviving work mirrors the market’s response to Maloof.”

Wade Terwilliger said the market for Sam Maloof furniture has held remarkably steady. “His famed rockers hold most of the top spots, and the curviest forms in fiddleback maple and rosewood are the most desirable,” he said. “Beautiful craftsmanship tends to hold value, and I believe the catalog raisonné, well-documented provenance and an active studio lend themselves to a healthy market because there is little question of authenticity.” 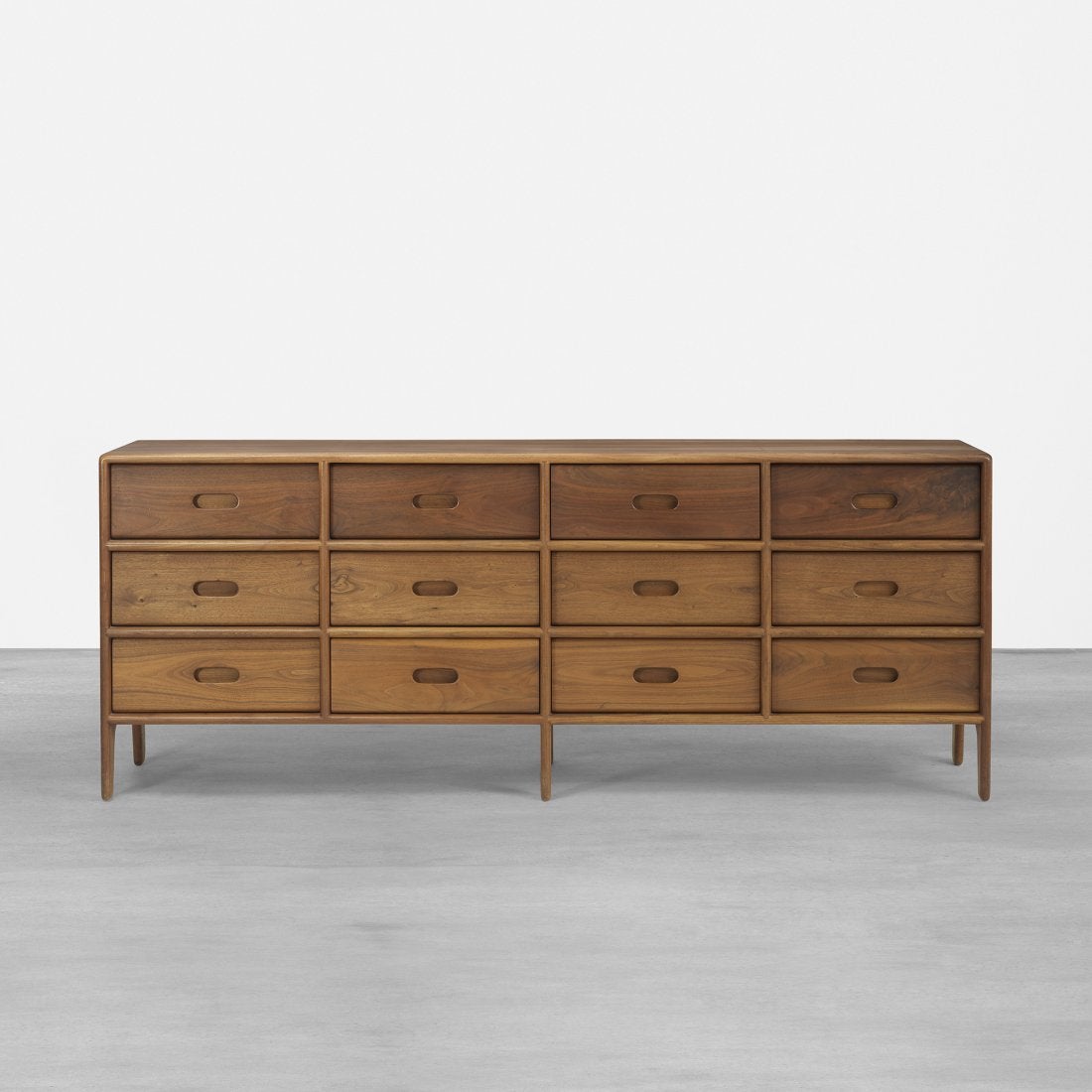 Walnut 12-drawer cabinet made circa 1975 by Sam Maloof with dovetail joinery and circular tenon details, an exemplary of Maloof’s exquisite craftmanship, signed with branded manufacturer’s mark to each drawer, 80in wide x 20in deep x 32in tall, sold at Wright for $24,2130. Image courtesy of Wright

Jason Stein said the current market demand for works by Maloof is strong and consistent – “especially for his prized sculptural rocking chairs, cribs and hutches. I see this demand continuing and many collectors have Maloof on their wish lists.” Bonhams holds the world record for Sam Maloof furniture at auction – set in Los Angeles in 2006 for a carved walnut conference table and ten armchairs ($194,250). It also holds the record for a Sam Maloof rocking chair, with an example making $80,500 in 2012. Pieces by Maloof continue to do well at auction.

Maloof’s former residence in Alta Loma, which he purchased as a simple bungalow in 1953, was, over time, transformed by Maloof into a timbered, 22-room house with a hand-carved spiral staircase and door latches shaped like miniature golf clubs. It’s listed on the National Register of Historic Places and now serves as the Sam and Alfreda Maloof Foundation for Arts and Crafts. Tours of the historic home are given on Thursdays and Saturdays. 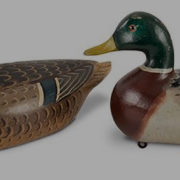 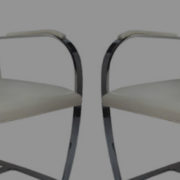 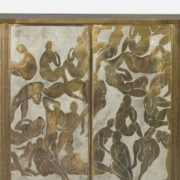