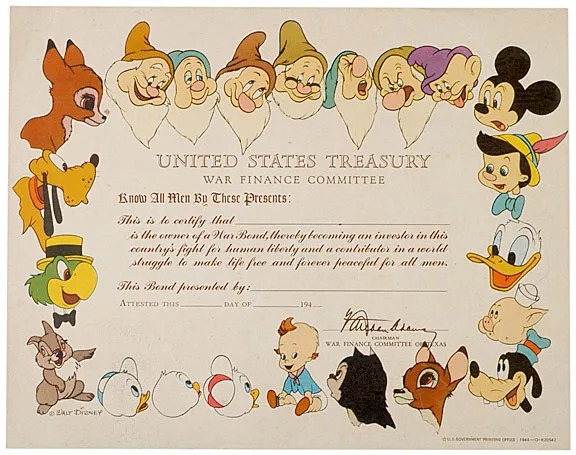 A 1940 war bond issued festooned with Disney’s most recognizable characters to date sold for $200 plus the buyer’s premium in April 2005. Image courtesy of Early American History Auctions and LiveAuctioneers

Your net worth can comprise more than money. It can be artistic, historic, and emotional, and it can showcase famous signatures. Scripophily – the collecting of vintage stock and bond certificates for their own sake – covers all those bases. These documents no longer pay out on their face values, but they deliver other riches, some tangible, some not.

The earliest known paper stock was issued by the East India Company in 1606, but stocks have existed in one form or another since Roman times. A stock certificate states you have invested in an enterprise and you expect a share of the profits, knowing they might never materialize. Local inns often served as loosely regulated stock exchanges. 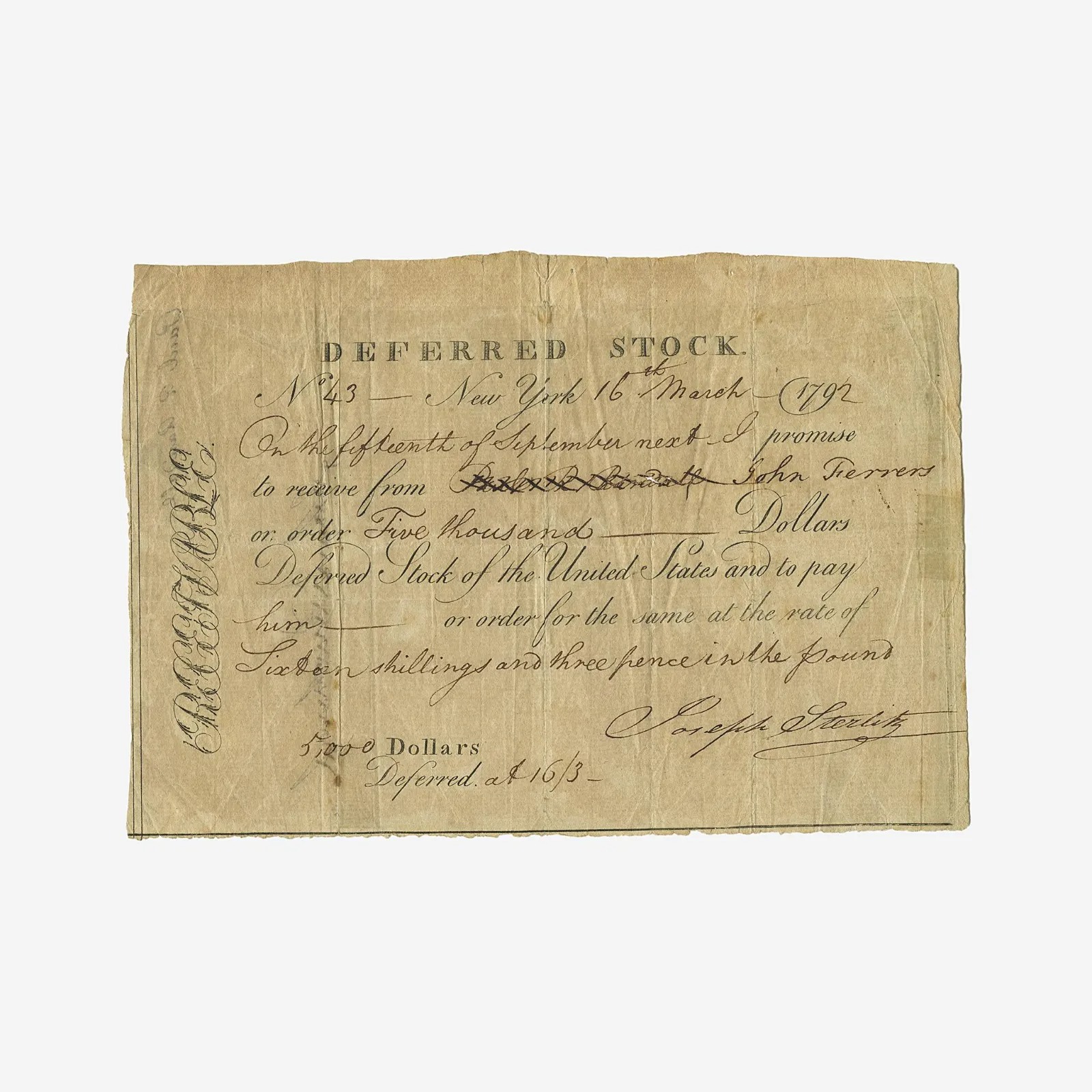 A United States stock certificate from March 1792, issued during the week of the stock market crash that caused the country’s first financial crisis, achieved $35,000 plus the buyer’s premium in October 2021. Image courtesy of Freeman’s and LiveAuctioneers

Things changed in 1792 when a group of New Yorkers who traded stocks under a buttonwood tree on Wall Street signed the Buttonwood Agreement, a document for governing the transactions. It laid the groundwork for what would ultimately become the New York Stock Exchange, realizing Alexander Hamilton’s idea for a regulated national stock exchange. Today, nearly 1.5 billion stocks representing about 2,800 companies are traded every day via Hamilton’s creation.

Electronic trading has rendered printed stock certificates obsolete. In 2013, the Disney company, which knows a thing or two about shifting from analog to digital, became the last major entity to issue paper stock certificates. 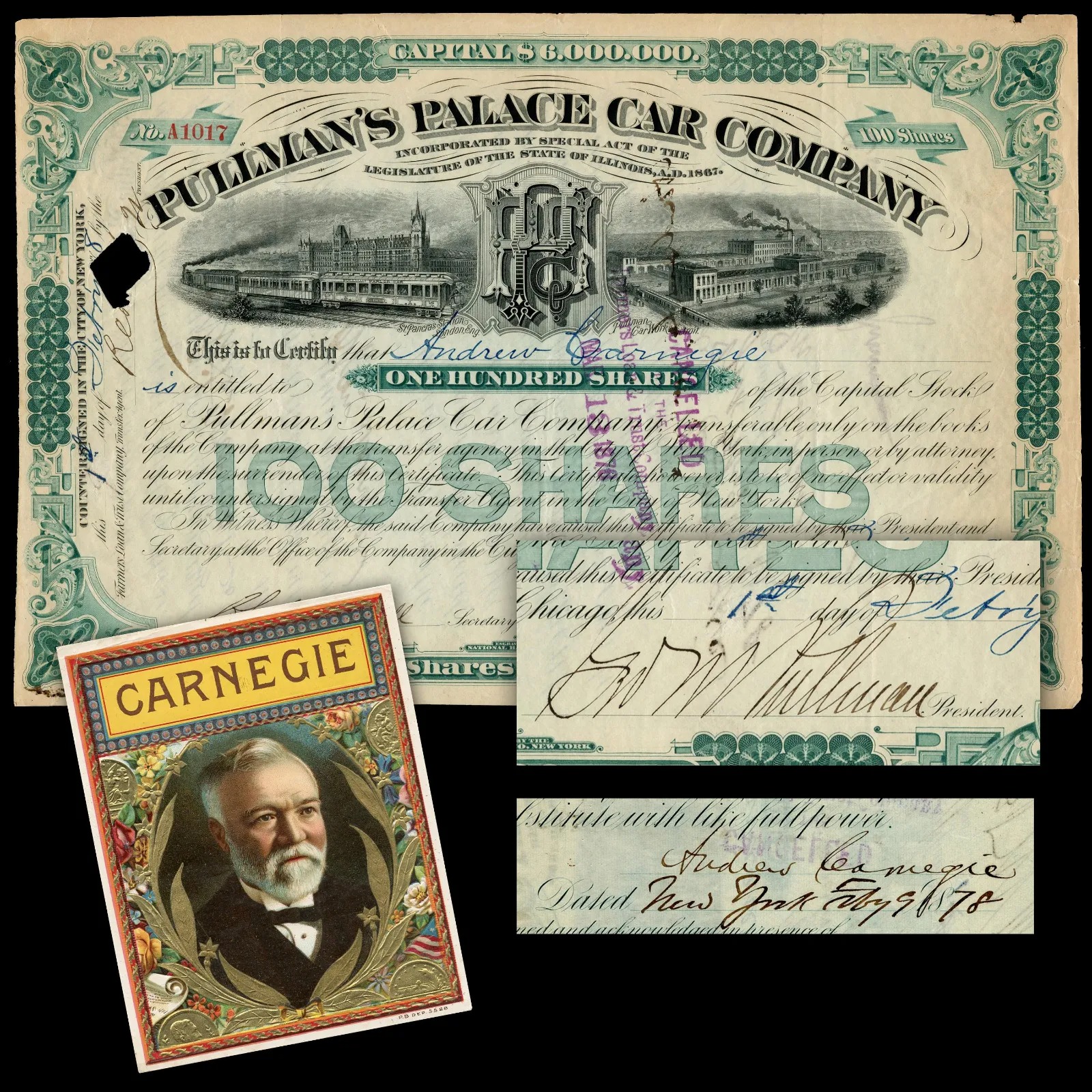 America is an entrepreneurial nation, and stock certificates illustrate the story of its growth and expansion. Collectors can assemble portfolios of vintage certificates from companies that mined gold, silver or minerals; those that built railroads, automobiles and airlines; utilities, including providers of oil and gas; and companies for wireless or telephone services, to name a few. 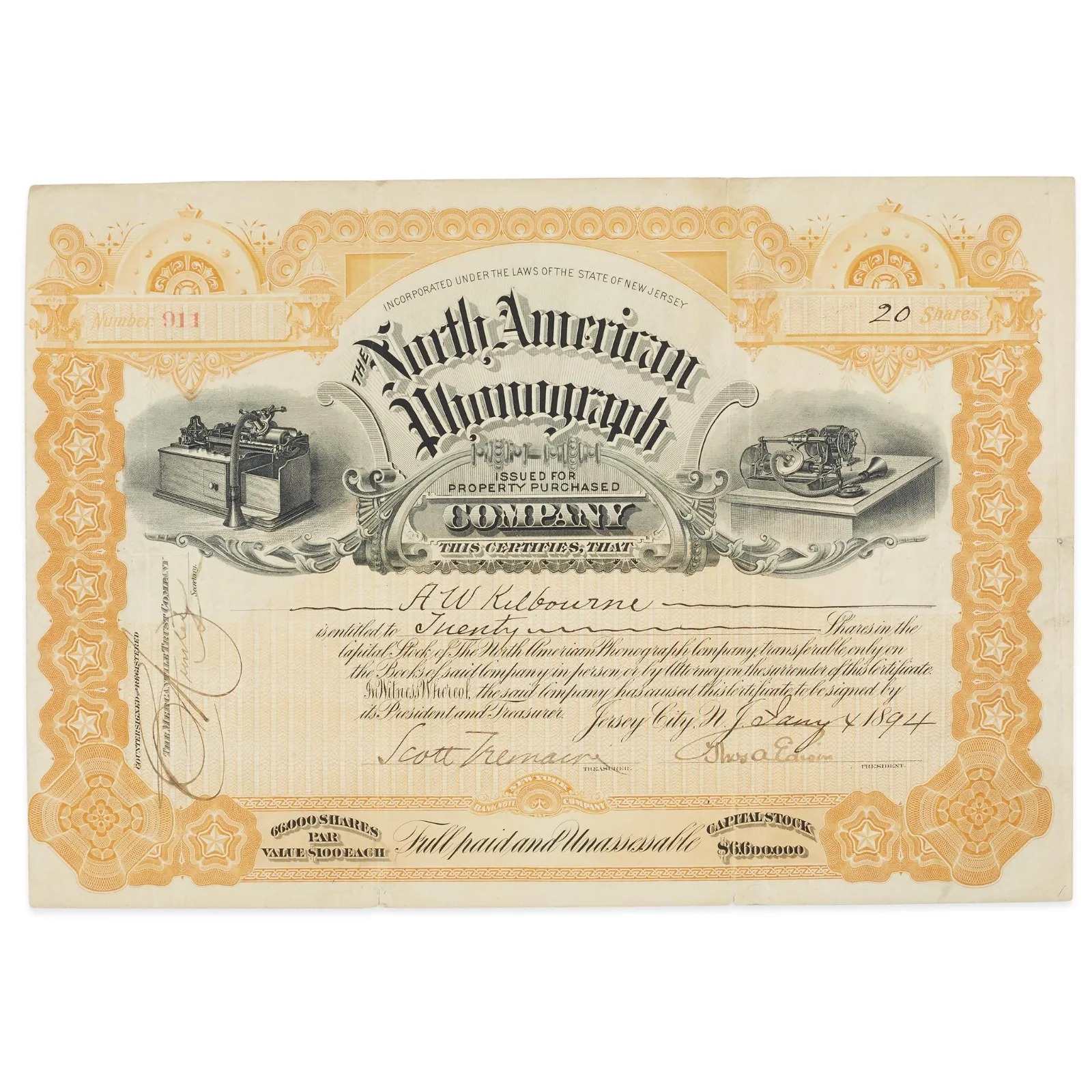 Before the rise of logos and branding, the stock certificate fulfilled many of the needs that corporate graphics address, giving investors the sense that the issuer was a serious, upstanding, well-run concern that would not abscond with their money. And, before the age of the automatic pen, titans of industry signed these documents themselves. Proof of having been touched by a famous, historic hand imbues these documents – which are really just fancy-looking I.O.U.s – with value strong enough to outlast the projects for which they were issued. 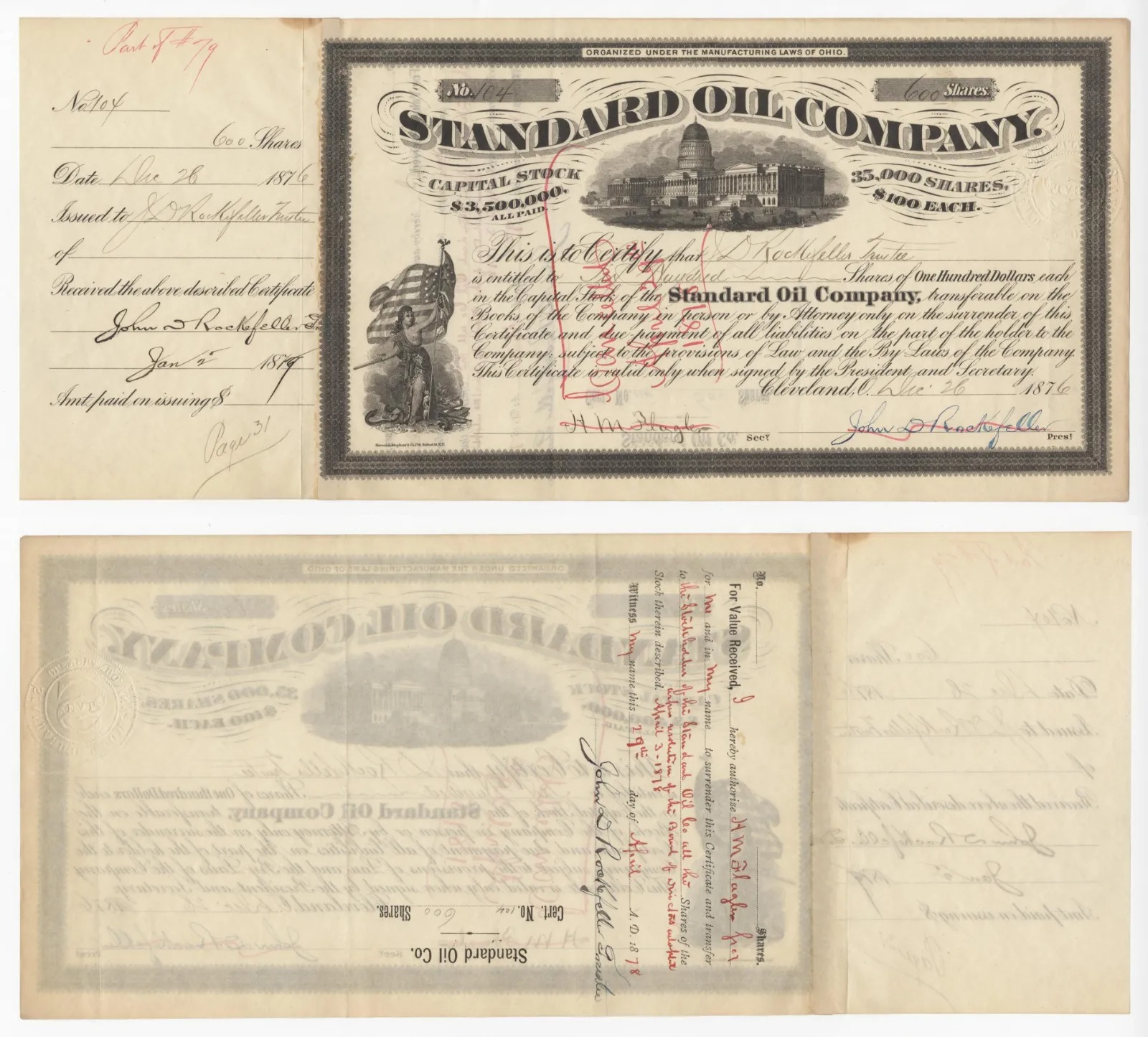 “If you have a stock certificate signed by Rockefeller or Morgan, it’s worth money … It doesn’t matter how good looking it is or isn’t. That’s the first component for value. The second is the aesthetics, combined with the condition. If it’s in bad condition, it doesn’t really matter how good looking it is. If you can’t display it, it’s just not as interesting,’ Gary Rose of certificatecollector.com said in a 2008 interview with Collectors Weekly. 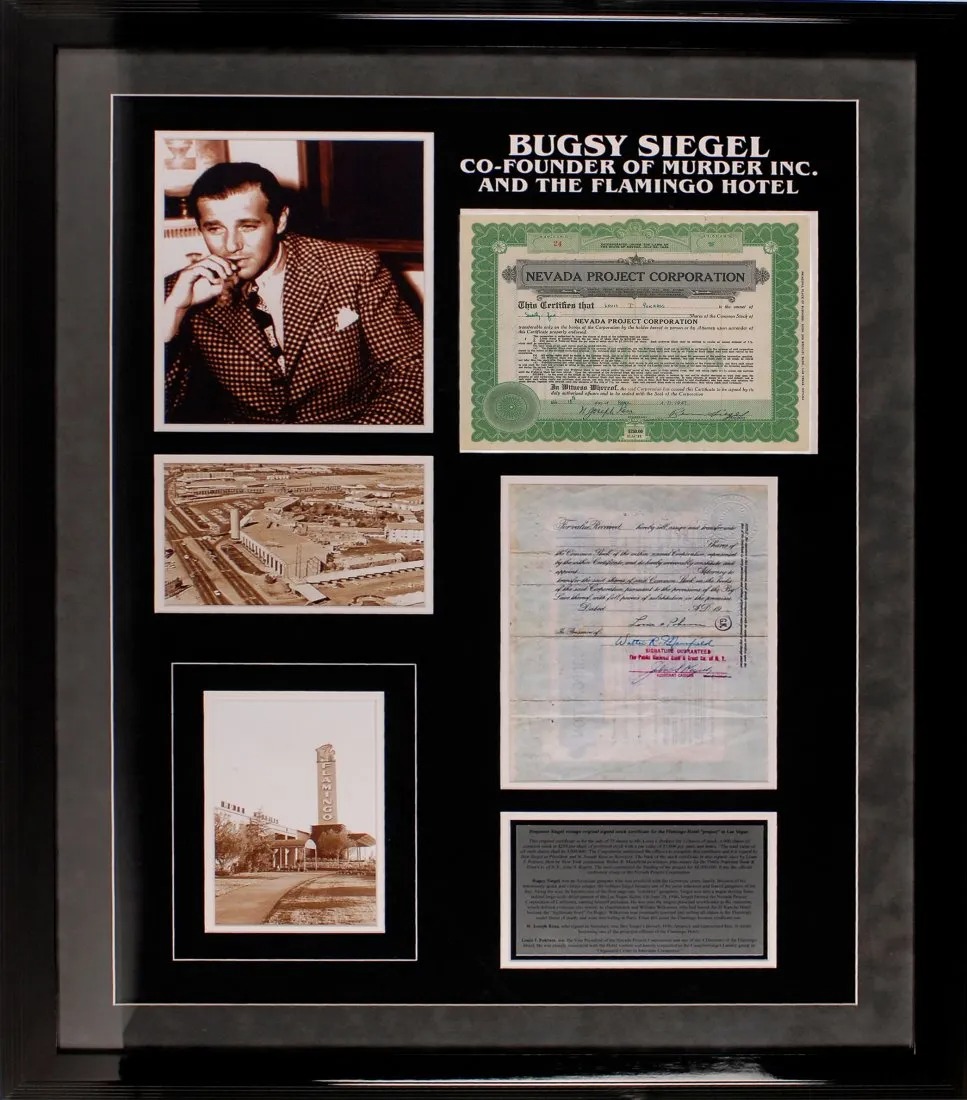 A stock certificate for Bugsy Siegel’s Las Vegas casino achieved $37,000 plus the buyer’s premium in September 2012. Image courtesy of RR Auction and LiveAuctioneers

Other factors affecting the desirability of a stock certificate include the type and color of the paper on which it is issued; whether it is printed or written; its date of issue; the images on the certificate, with special attention given to the vignette (aka the largest central image); the company that issued it; the type of stock it represents; who owned it; its rarity; and, of course, its historical significance. All these seemingly small details can add up to serious sums at auction.

Bonds are typically issued by an authority such as a national government, an agency, a state or a municipality to raise funds for schools, roads, utilities and other improvements to infrastructure. But initially, bonds provided governmental bodies a tool for underwriting wars and conflicts.

A Revolutionary War-era bond issued by the state of Maryland sold for $2,200 in December 2011. Image courtesy of Early American History Auctions and LiveAuctioneers

The City of Amsterdam issued the first municipal bond in 1517 to help finance its debts. England paid for its continuous wars against France with bonds beginning with William III in 1694, and other European monarchs followed his lead. The American colonies issued bonds and loan certificates to fund its revolution against George III. America’s efforts in World War II likely would have suffered without sales of savings bonds.

The holder of a bond lends money to the issuing authority for a specific amount of time, expecting only interest on the loan until the bond matures, and nothing more. Unlike those who own stocks, bondholders do not gain any form of ownership in the authority offering the bonds.

Early bond certificates came with a feature that most stock certificates lack: coupons. To receive the allotted interest payment, the bondholder tore off a coupon and redeemed it with the issuing authority. The presence or absence of coupons affects how well a bond certificate performs at auction. Collectors also care whether the coupons are still attached to the bond and how many there are, in addition to wanting to know if the bond is signed, and by who, and wanting to know the overall condition of the document. 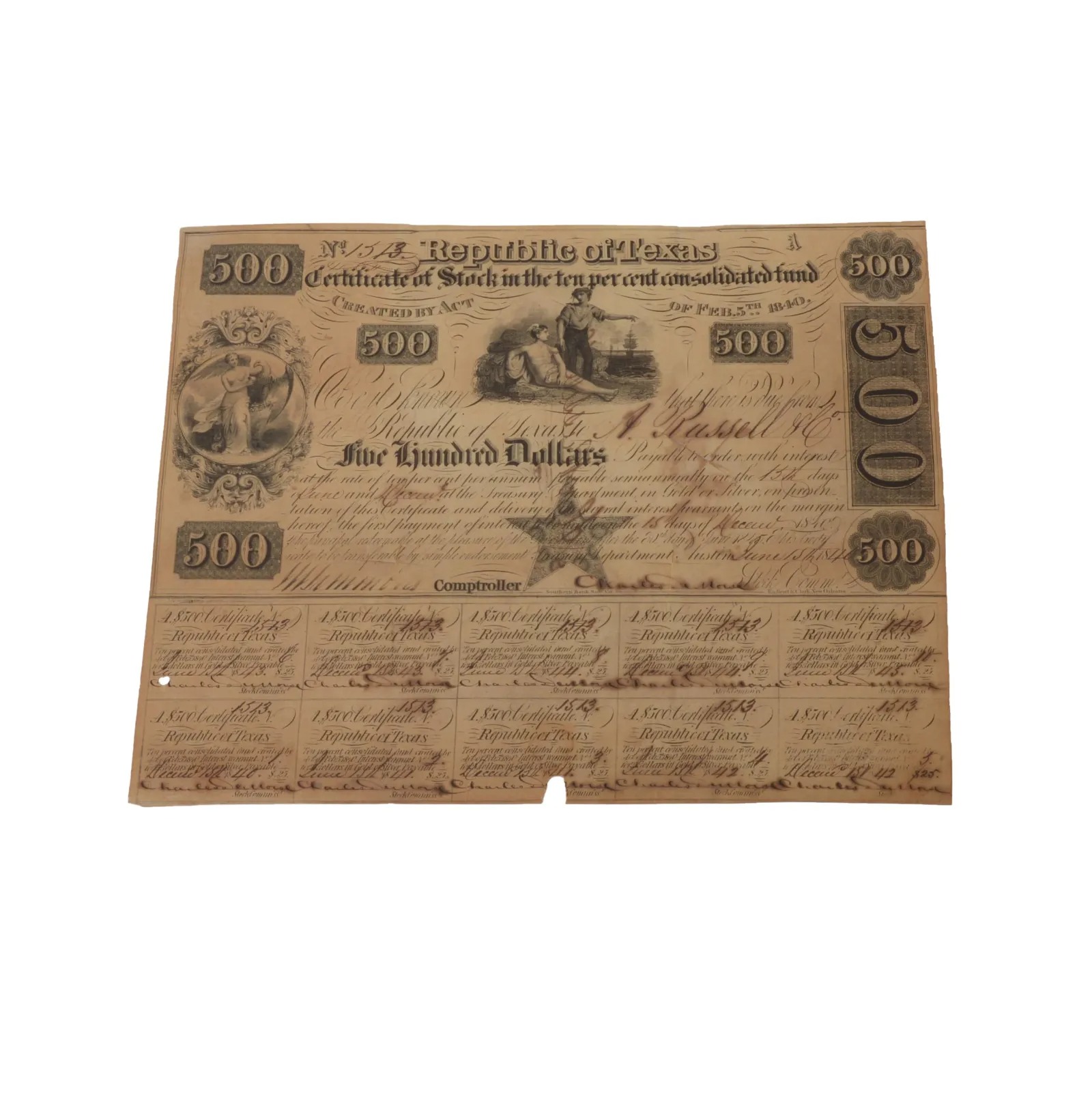 A bond issued by the Republic of Texas in 1840 – five years before it became a state – with all its coupons intact sold for $325 plus the buyer’s premium in February 2021. Image courtesy of Michaan’s Auctions and LiveAuctioneers

As with stock certificates, collectors of bonds enjoy a range of targets, from zero coupon bonds (which are redeemed whole at maturity); long term; short term; municipal; utility; money market; savings; perpetual; and even war bonds that are still being paid out. 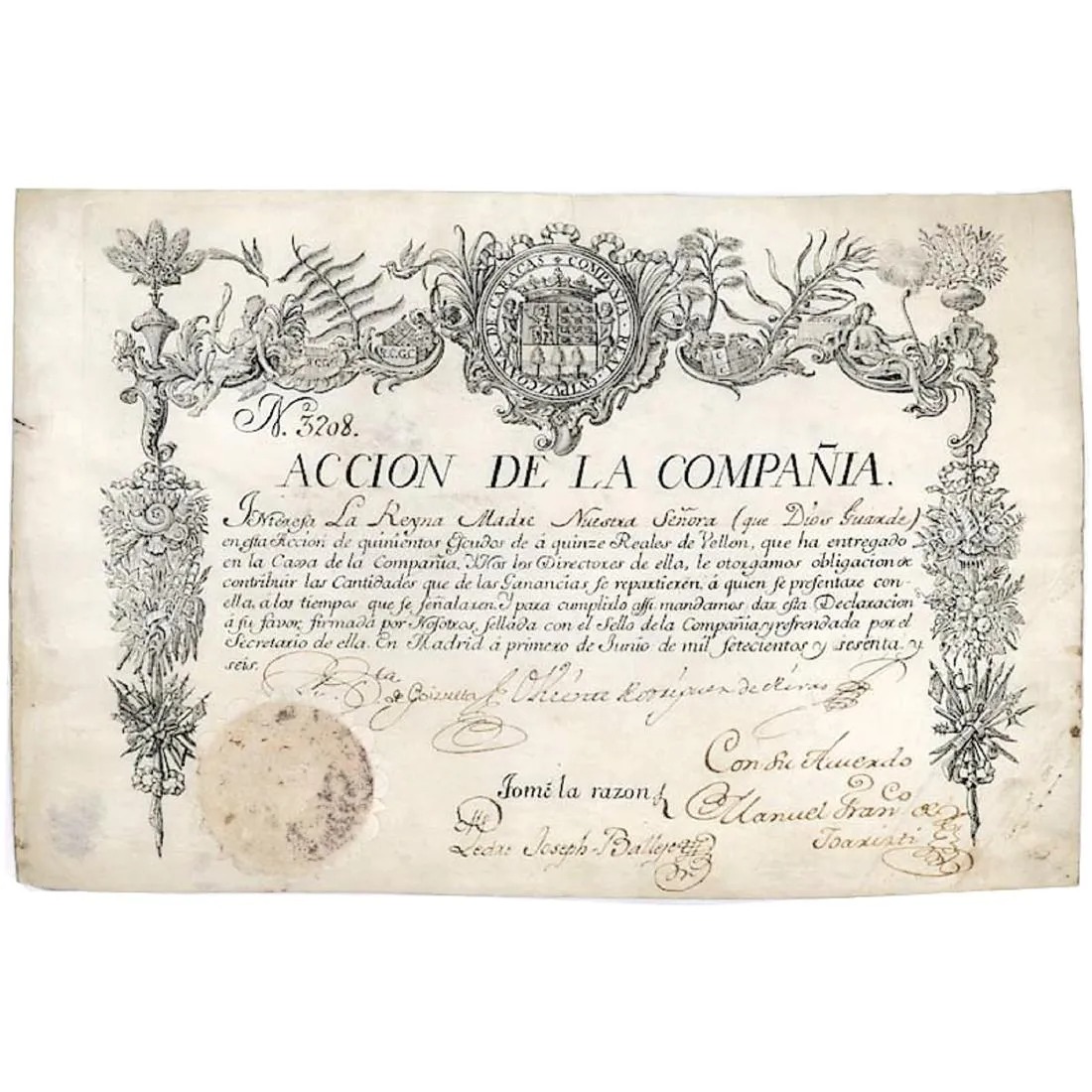 This Spanish trading stock issued to Elizabeth Farnese, Queen of Spain by marriage to King Philip V, sold for $9,000 plus the buyer’s premium in June 2019. Image courtesy of Early American History Auctions and LiveAuctioneers

The practice of collecting stocks and bonds for their historic and cultural significance is relatively new, dating back to 1970 or so. Coins and stamps, two other collectibles issued with face values, have more than a century’s head start. Nonetheless, the pursuit of vintage and antique stock and bond certificates boasts a large and devoted following. Nascent collectors can look to associations such as the American Stock and Bond Collectors Association, which maintains an open group on Facebook. Also, the International Bond and Share Society (scripophilyusa.org) provides members with helpful resources and guides. 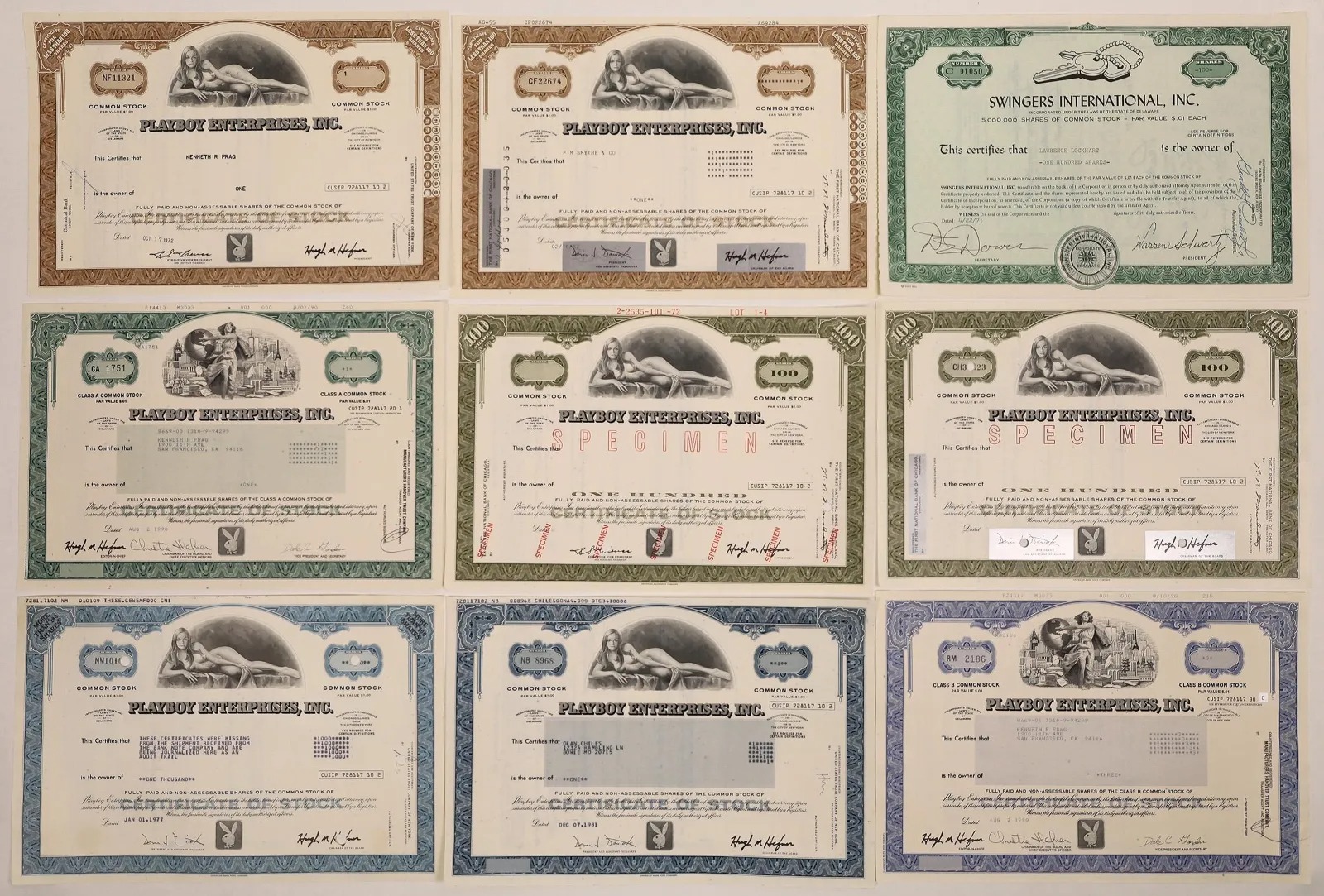 Possibly the most notorious stock certificate ever printed was issued by Playboy Enterprises. A lot containing eight such certificates, including two specimens, sold for $425 in December 2020. Image courtesy of Holabird Western Americana Collections and LiveAuctioneers

“Stocks [and bonds] are … interesting historically. Just about every stock in my collection, I’ve researched the company. A single stock can actually keep me busy for days. You try and research the company and see when it existed. Did they make anything important, was there anything special about them? They’re almost artifacts of history … ,’ said Rose. 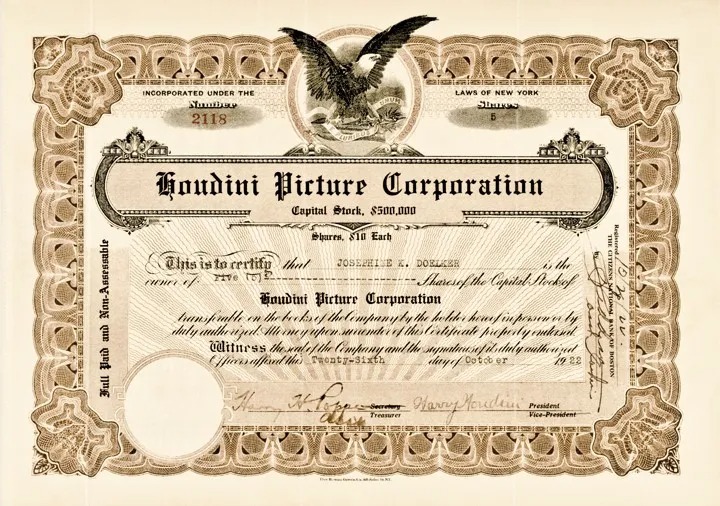 Stock and bond certificates for companies long since shuttered and projects finished ages ago still have value – it’s just different from the numbers printed upon them. The best examples tell a rousing tale with colors, graphics and design. ‘If you have a great-looking stock certificate,’ Rose continued, ‘even if it’s inexpensive, you can frame it, put it on a wall and it makes a very good work of art.’ Try doing that with a stamp or a coin.