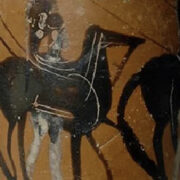 This Egyptian red glass kohl pot realized £460 (about $525) plus the buyer’s premium in December 2021. Image courtesy of TimeLine Auctions Ltd. and LiveAuctioneers

Ancient Egyptian, Greek and Roman vessels were each designed with a specific purpose in mind. Though scholars have strived to match known vessels with those depicted on classic vases or mentioned in the literature, many are known today by modern names. Each form served as needed and new generations updated and changed them accordingly. 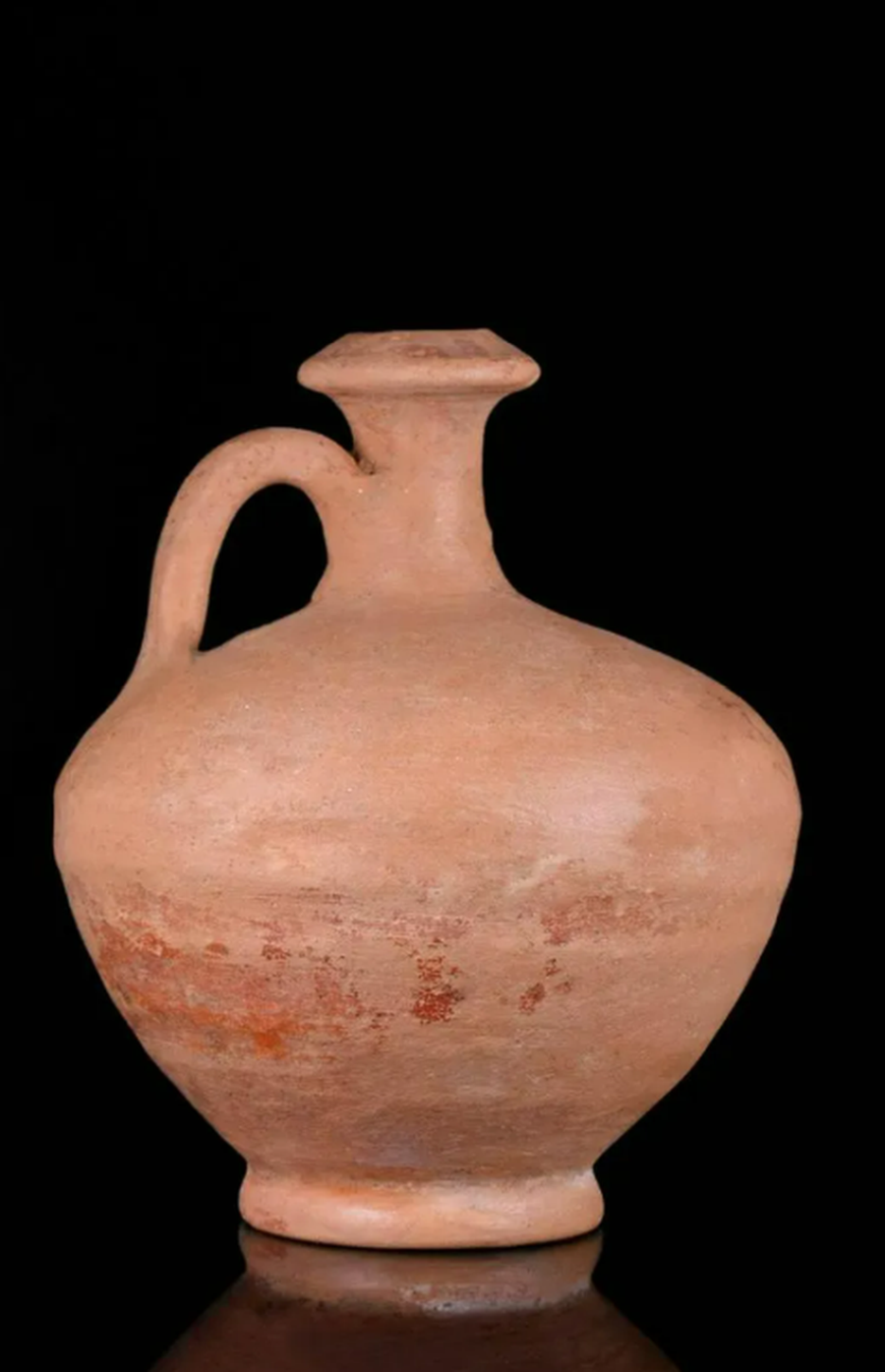 A Roman terracotta wine or water flagon featuring traces of red slip at its shoulder and on its foot ring earned £100 (about $114) plus the buyer’s premium in May 2022. Image courtesy of Apollo Art Auctions and LiveAuctioneers 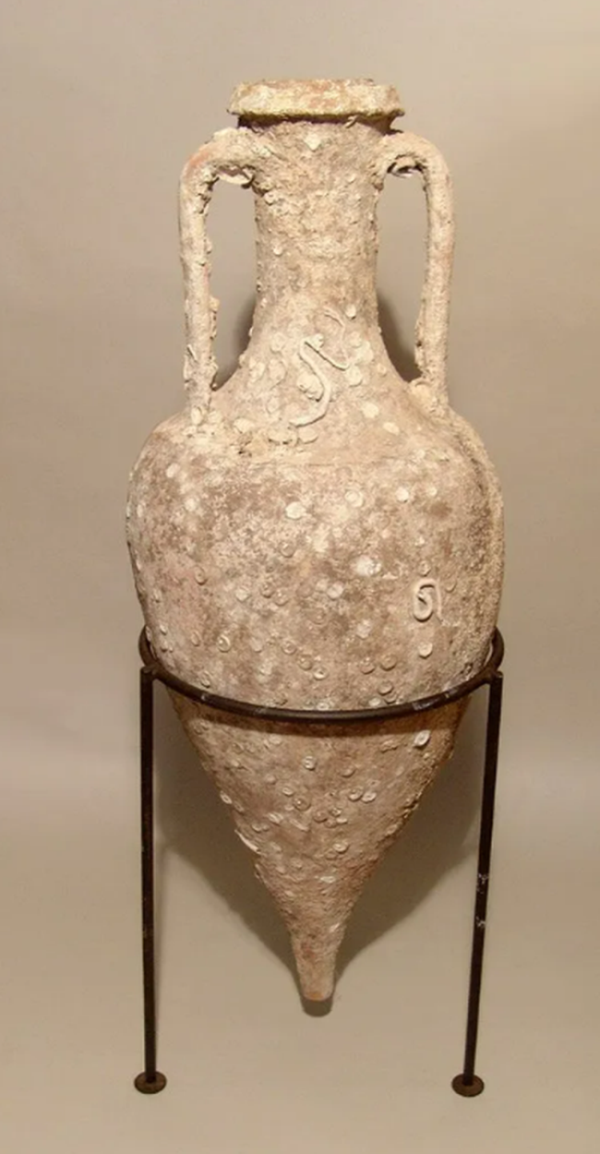 Unadorned, utilitarian terracotta amphorae often stood atop pointed feet. In addition to providing space for suspended solid particles, these forms allowed sturdy, upright storage when pressed into soft sand or tight, equally convenient storage when transported by land or sea. Though they capably protected goods from the damaging effects of light and air, these cheap vessels were usually destroyed or discarded once emptied. Ancient Resources auctioned a magnificent, extremely well-preserved 3rd- to 2nd-century B.C. Roman seaworthy transport amphora, bearing original marine encrustation, for $3,500 plus the buyer’s premium in March 2017. 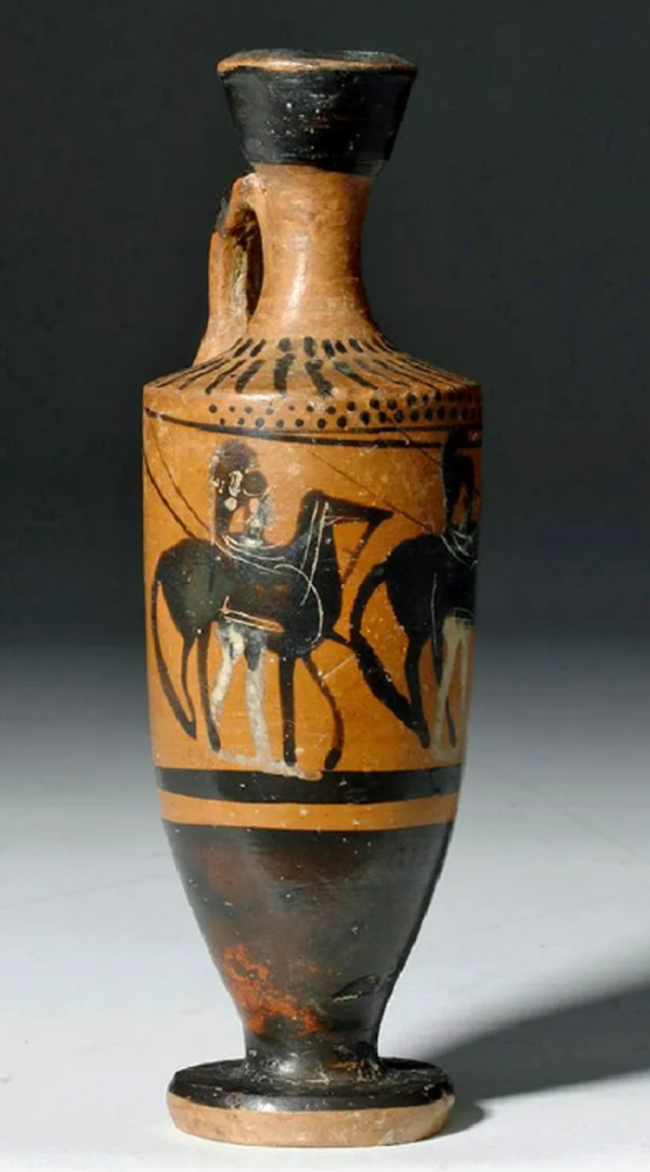 A small, exceptional Greek lekythos (oil flask) depicting horses and riders and dating to circa the late 6th to early 5th century B.C. realized $1,550 plus the buyer’s premium in February 2017. Image courtesy of Artemis Gallery and LiveAuctioneers.

Greek lekythoi (or lekythos in the singular) were terracotta oil flasks with narrow necks, long tapering bodies, small mouths and single looping handles. As with similar vessels, their shape minimized spills and evaporation but eased pouring. While larger lekythoi functioned in religious ceremonies or as funerary offerings, more delicate ones were evidently reserved for personal use to dispense costly, aromatic oils or unguents at baths. In February 2017, Artemis Gallery auctioned an exceptional lekythos depicting horses and riders rendered in black for $1,550 plus the buyer’s premium. 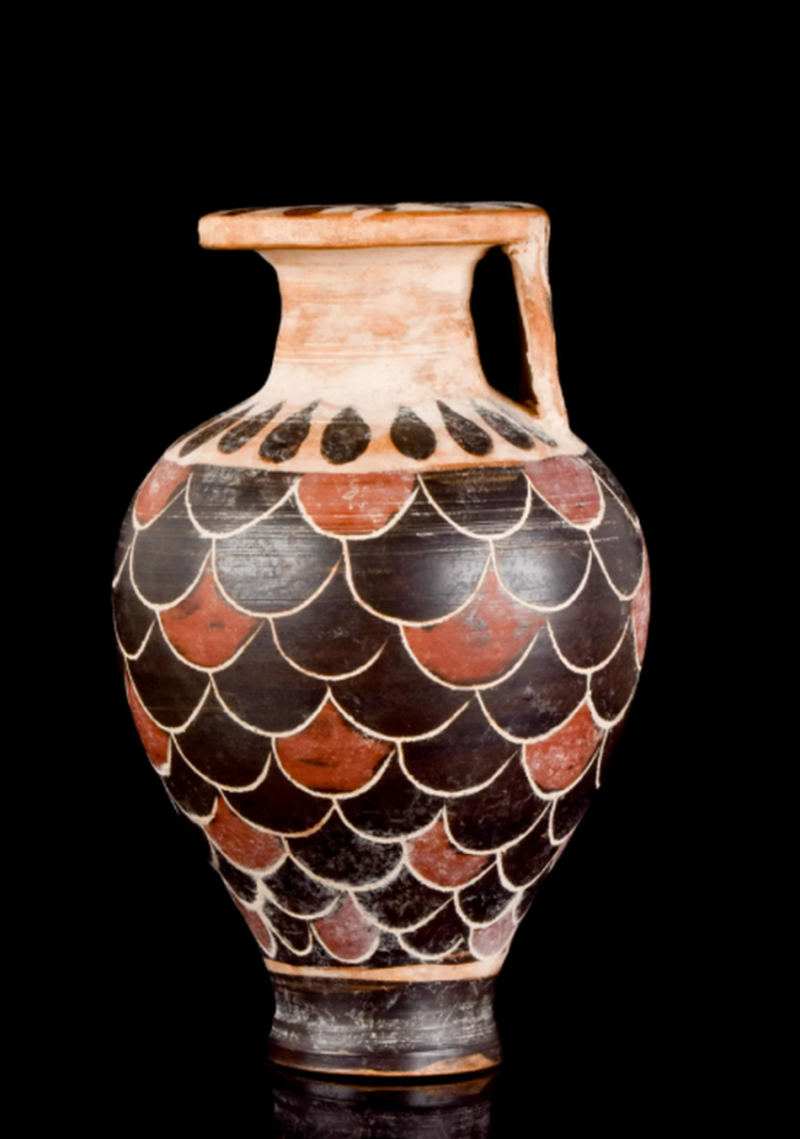 This Corinthian ware aryballos from Greece, dating to circa 650 B.C., features black and red figures and overlapping scales with rays on its shoulder and around its mouth. It brought £950 (about $1,084) plus the buyer’s premium in August 2022. Image courtesy of Apollo Art Auctions and LiveAuctioneers

According to images seen on ancient vases and funerary pillars, Greek athletes headed to the baths carried aryballoi (aryballos if singular), little perfume- or oil-filled flasks with narrow necks and broad, flat, spill-reducing lips. Apollo Art Auctions sold a 7th-century B.C. Corinthian ware aryballos featuring overlapping decorative motifs known as fish scales and tear drop rays, which appeared on its mouth and shoulders, for $1,084 plus the buyer’s premium in August 2022. 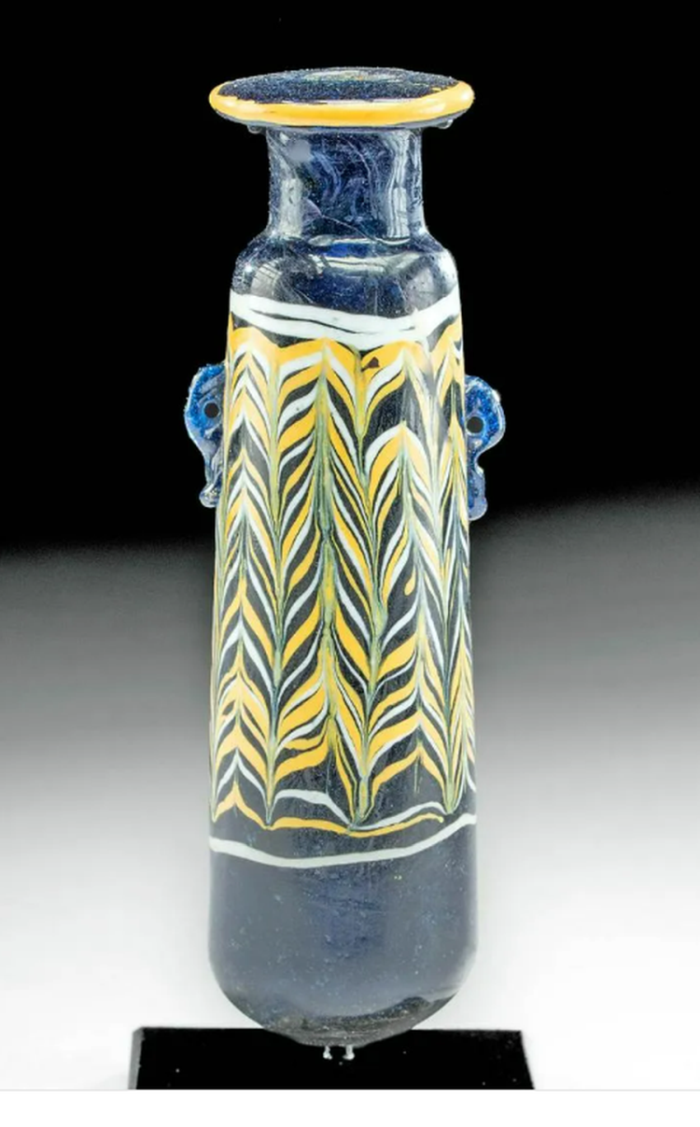 Ancient vessels not only shed light on the art and culture of past civilizations. They also illuminate the lives of those who relied on them and treasured them. An Egyptian faience female figure, standing more than five inches tall and dating to the 12th dynasty of the Middle Kingdom (1938-1756 B.C.), achieved $86,000 plus the buyer’s premium in May 2022. Image courtesy of Hindman and LiveAuctioneers

Ancient Egyptians believed that the color blue, which they associated with water, the heavens and rebirth, offered protective powers both in life and the afterlife. For thousands of years, elite classes wore or carried amulets carved from highly prized imported blue stones such as turquoise or lapis lazuli. They also tucked gemstone amulets, scarabs and figurines within the tombs of the prestigious. Members of the Egyptian lower classes came up with a clever substitution for the unaffordable stones. They favored small handmade or molded pieces fashioned from a combination of crushed quartz, alkaline salts, lime and mineral-based pigments – the recipe for what we now know as Egyptian faience.

Items made from faience typically featured translucent, gleaming turquoise blue or blue-green glazes magically linked with life, fertility and immortality. Other examples featured alluring black, brown, yellow, white or marbled lusters, depending on their mineral content. These were applied by brush, through dips in faience slurries, or by submerging the piece in glazing powder before firing. By the Middle Kingdom (2055-1650 B.C.), efflorescence, the technique of adding glaze to faience forms before firing, emerged. Faience’s ease of manufacture triggered mass production of amulets, rings, tiles and figurines of common creatures such as fish, frogs, hedgehogs and crocodiles. Hippopotami faience, ranging from seal-amulets to statuettes, were also wildly popular. Yet their inspiration – unpredictable, aggressive territorial behemoths – were not only feared but revered. Because they wallowed in the plentiful, rich mud of the Nile River, the ancient Egyptians associated hippopotami with fertility. Andrew Williamson, manager of the research and writing department at Artemis Gallery, explained that because many believed these immense creatures “roared” at dusk and dawn, they also reflected the daily cycles of life and the afterlife. 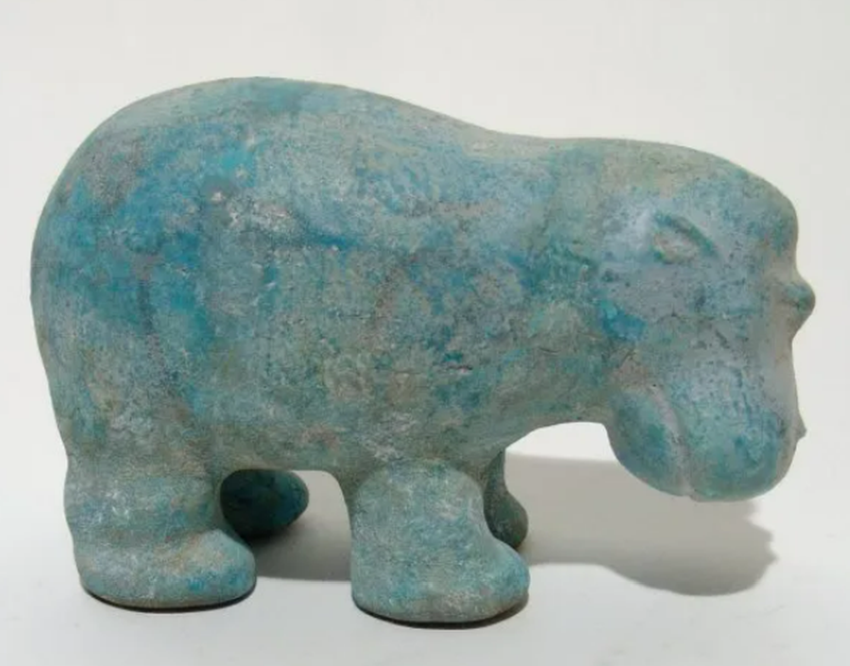 This Middle Kingdom (2061-1690 B.C.) faience hippopotamus, each side featuring lotus flowers and leaves, attained $10,000 plus the buyer’s premium in December 2016. Image courtesy of Ancient Resource Auctions and LiveAuctioneers

Hippopotamus-form faience that reach the auction market today usually portray standing compound deities such as Taweret, a fertility goddess who, in addition to a hippo head, bears lionine and crocodilian features. Yet recumbent models such as the plump, realistic blue-glazed beast that earned $10,000 plus the buyer’s premium at Ancient Resource Auctions in December 2016, are far more collectible. 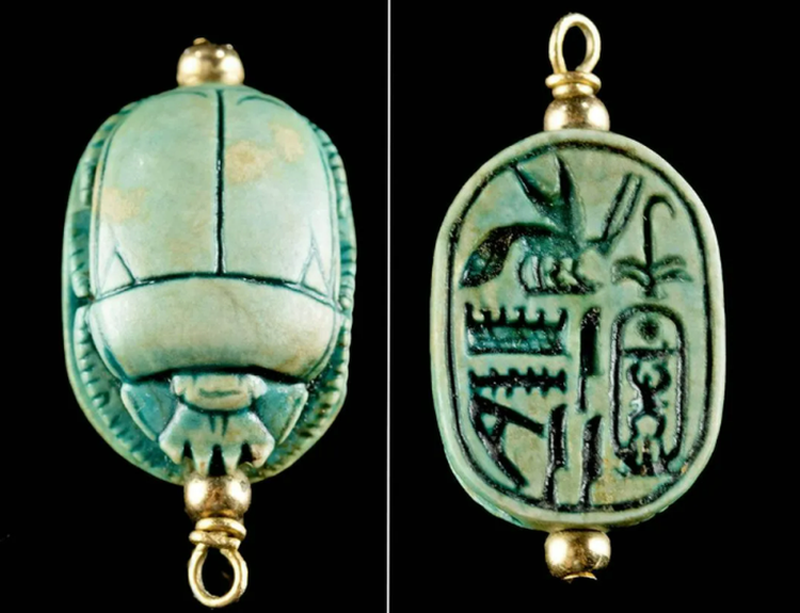 A mold-formed faience scarab pendant featuring hieroglyphics and a cartouche of Pharaoh Amenhotep II (reigned 1427-1401 B.C.) sold for $1,750 plus the buyer’s premium in June 2021. Image courtesy of Artemis Gallery and LiveAuctioneers

Shiny faience mummy necklaces, which substituted for strands of costly lapis lazuli, carnelian or malachite beads, were long thought to accompany ancient Egyptians into the afterlife. A magnificent restrung turquoise and gold-bead strand, traced to the New Kingdom’s Amarna workshops, earned $1,957 plus the buyer’s premium at auction in July 2022. 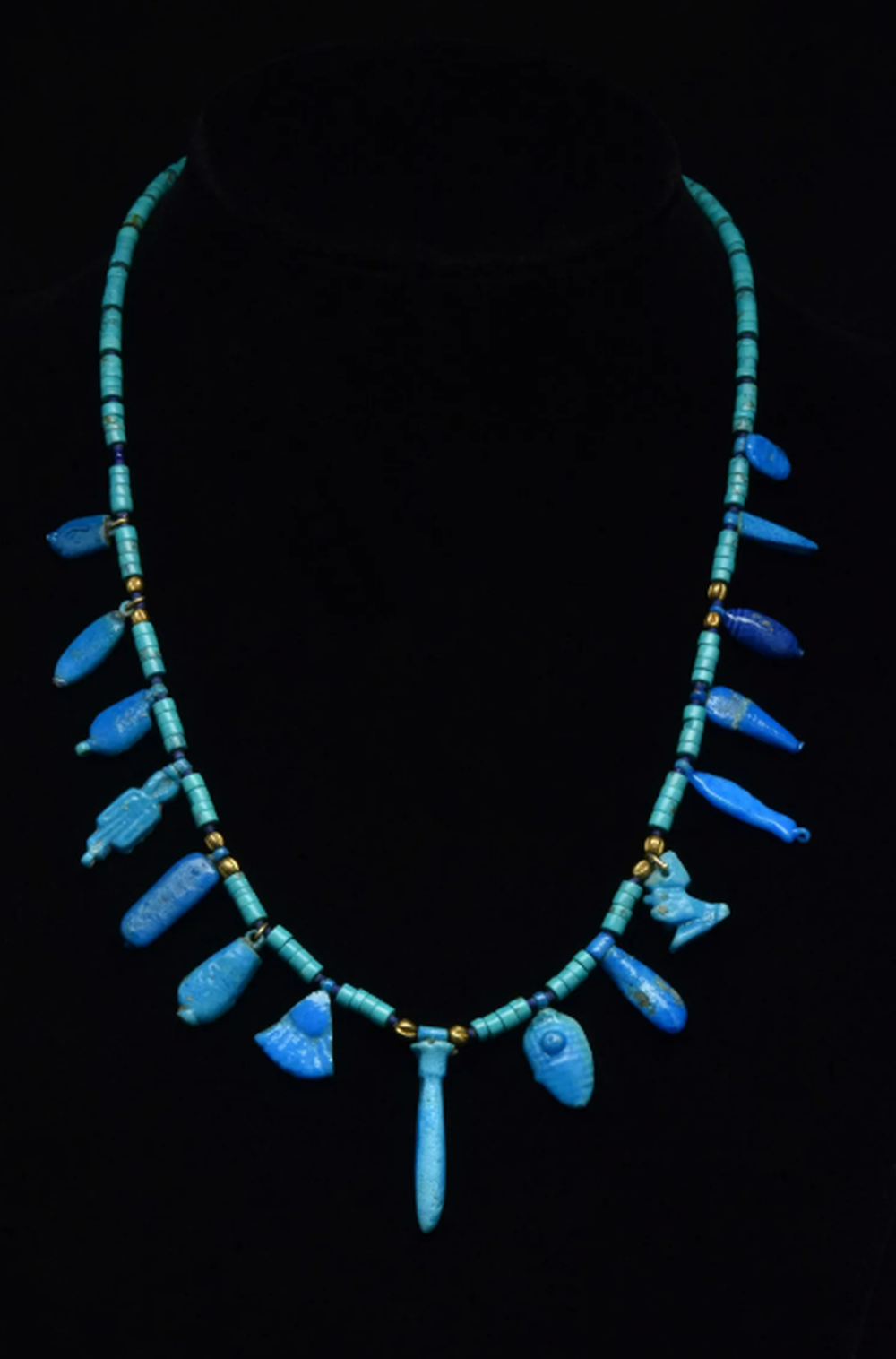 This restrung faience and gold-bead amulet necklace, dating to the New Kingdom, Amarna Period (1353-1336 B.C.), brought £1,700 (about $1,957) plus the buyer’s premium in July 2022. Image courtesy of Apollo Art Auctions and LiveAuctioneers

Ancient Egyptians revered cats for their formidable vermin-catching abilities. Yet only toward the end of the New Kingdom did Bastet, their fierce lioness goddess, evolve into kindlier cat deities such as those gracing the faience figural ring Alex Cooper auctioned for $4,250 plus the buyer’s premium in February 2015. 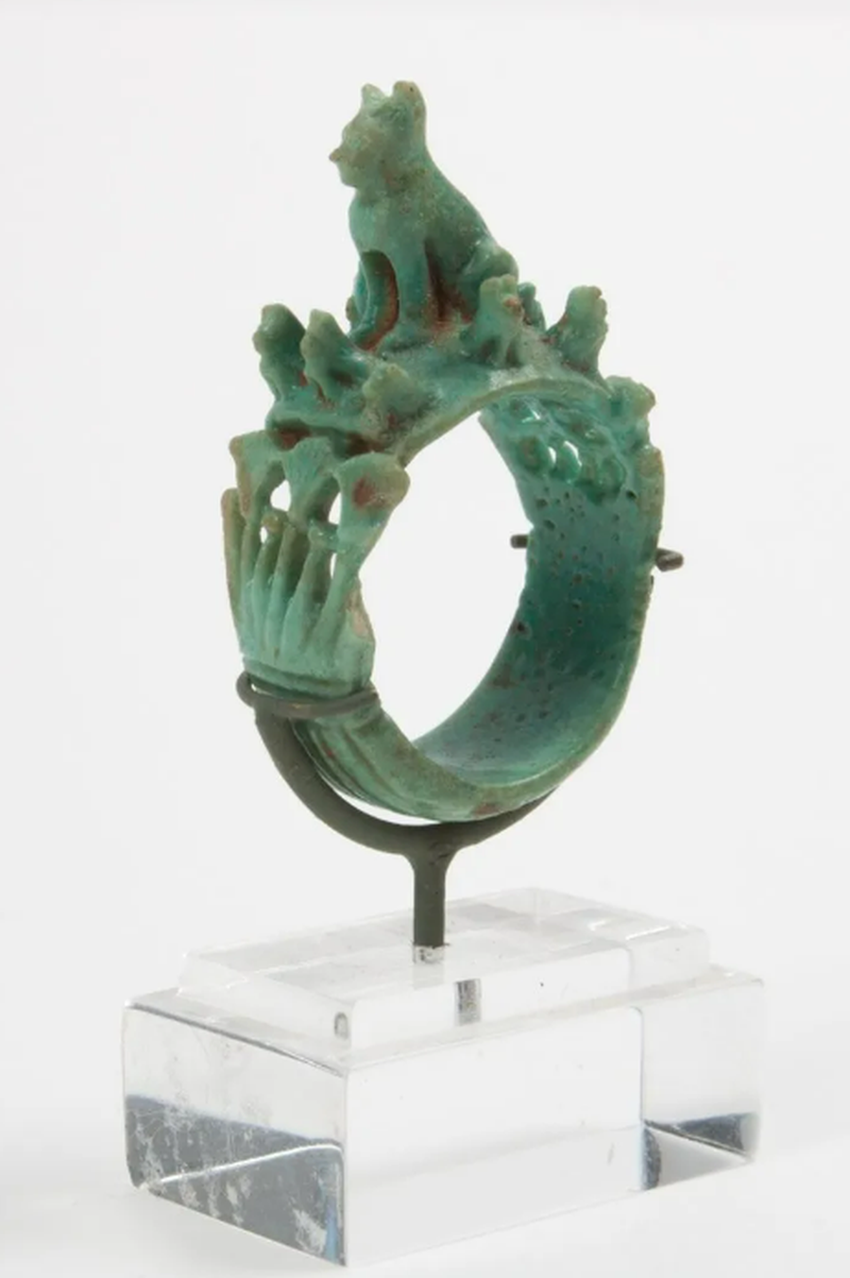 Scores of ushabtis – small mummiform male and female faience figurines found scattered among grave goods – date from the Late Dynasty Period (664-525 B.C.). Because these figures were meant to serve as laborers in the afterlife, many bore agricultural accouterments including picks, hoes and baskets. Most were mass-produced from standardized molds; others, such as the miniature example Artemis Gallery auctioned for $3,500 plus the buyer’s premium in May 2022, were highly personalized. In addition to an inscribed ushabti–spell from the Book of the Dead, it bears a hieroglyphic text identifying its master as Psamtek, overseer of the Egyptian treasury. 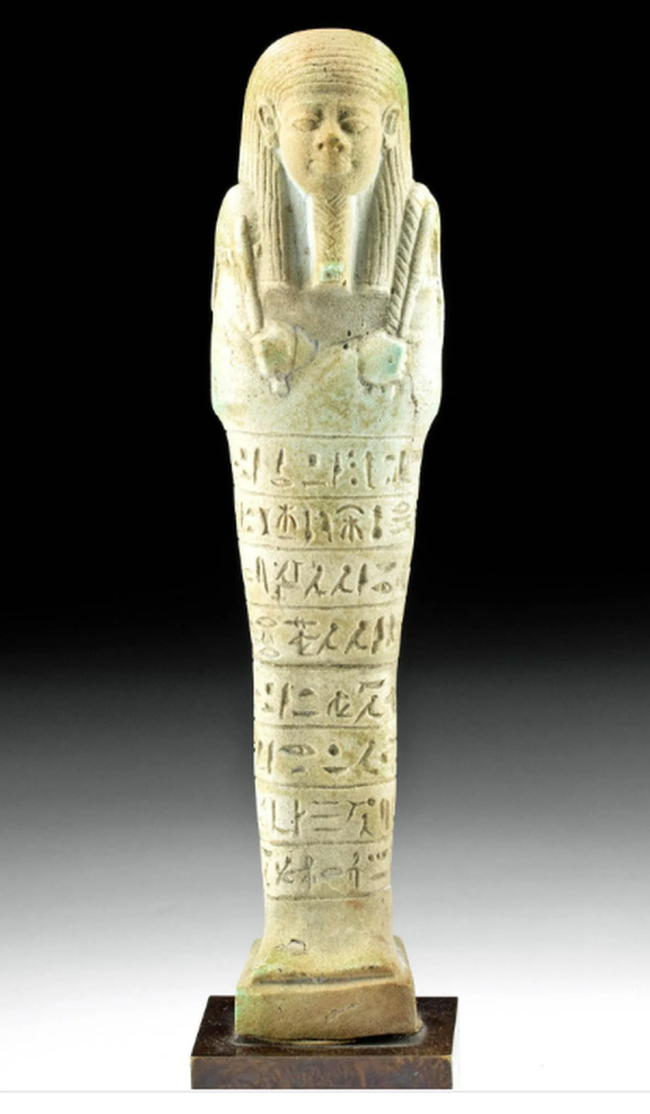 A Late Period (664-525 B.C.) ushabti made for Psamtek, overseer of the treasury, its abdomen and legs inscribed with hieroglyphic text and a spell from the Book of the Dead, went for $3,500 plus the buyer’s premium in May 2022. Image courtesy of Artemis Gallery and LiveAuctioneers

“Like ushabtis, eyes were also incredibly symbolic to the ancient Egyptians, since they represented a window to a mummy’s soul for eternity,” said Artemis Gallery’s Andrew Williamson. Faience eye and brow sets, typically made by funerary priests or sarcophagus artists, reflected the social status of the deceased as well as their family’s wealth. In August 2018, Artemis Gallery auctioned a pair of life-like, wide-eyed orbs for $11,000 plus the buyer’s premium. 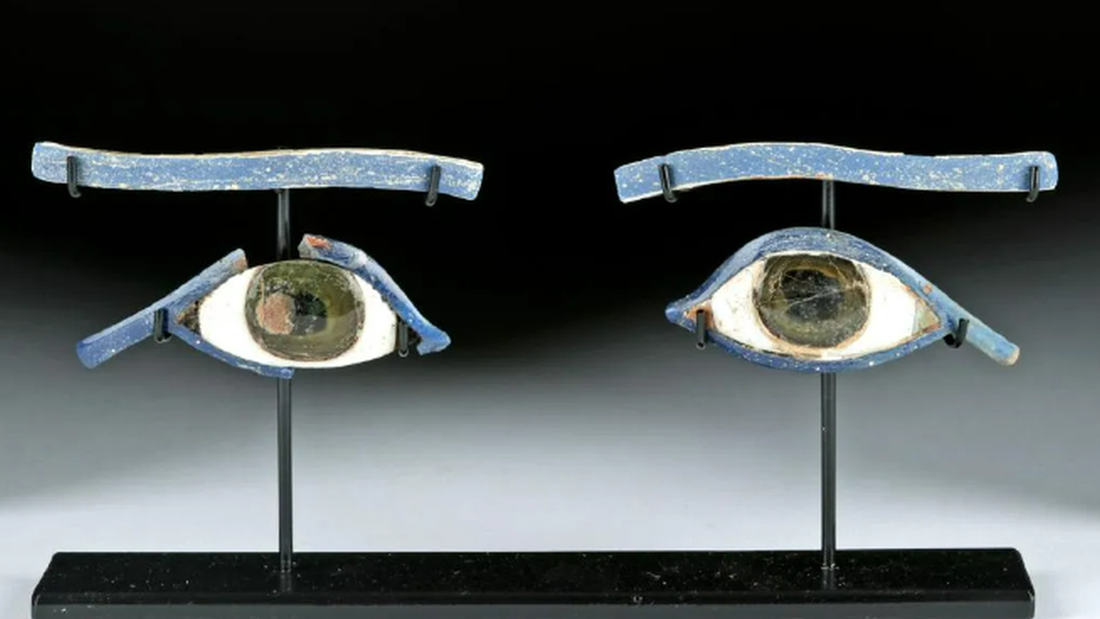 A pair of glass and faience sarcophagus eyes from the Late Period (662-315 B.C.) realized $11,000 plus the buyer’s premium in August 2018. Image courtesy of Artemis Gallery and LiveAuctioneers

Although ancient Egyptian faience works may be tiny objects of shimmering beauty, they embody important human concerns that transcend the ages.