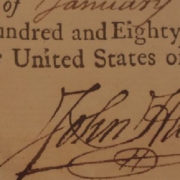 NEW YORK – Nothing is more personal than a handwritten autograph. There are literally no two alike, even from the same person. It’s why so many ask for one from a VIP they admire from afar. Having an autograph is a personal connection that will forever have its own story to tell.

The earliest known autograph, according to different sources, is that of a “signed” list on a Sumerian clay tablet verified by a scribe named Gar Ama around 3100 B.C. Curiously, no other autograph of the ancient world has survived, except copies of Greek manuscripts created around the 15th century. 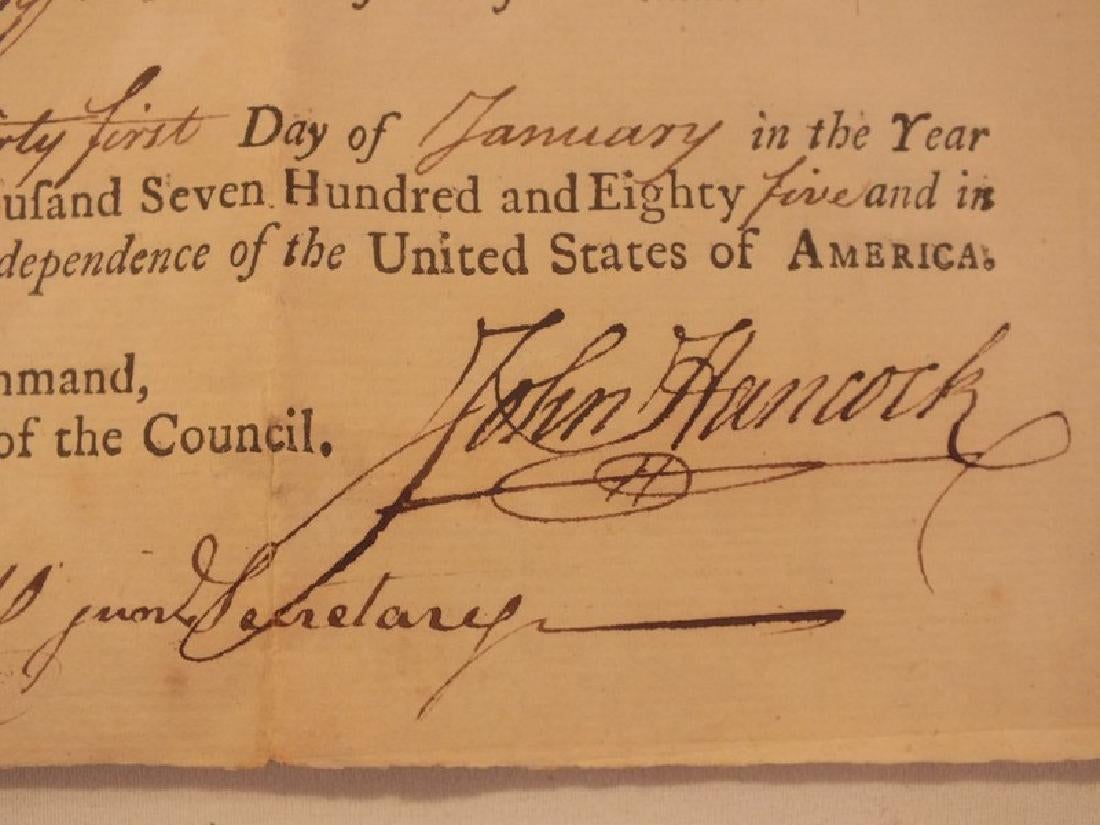 Probably the most recognized handwritten autograph in American history is the large signature of President of Congress John Hancock when he signed the Declaration of Independence so that King George could read it without his glasses (probably apocryphal). This authentic autograph on an appointment sold for $3,000 + the buyer’s premium in 2018. Image courtesy Americana Auctions and LiveAuctioneers

Collecting autographs of the famous for its own sake only began around 1700 in Europe and the early 19th century in the United States. “In the Victorian era, autograph collecting became a mania and demand was insatiable,” according to Steven Raab of raabcollecting.com. By 1887, Walter R. Benjamin opened the first retail outlet specifically for autographs in New York City.

Today, in the era of “celebrity,” autographs are still earnestly sought and traded, both contemporary and historical. Just as we know that facsimile signatures appear on copies of original manuscripts, collectors specialize in identifying five different autograph types.

The best way to know if an autograph is authentic is to actually see it being written by the person whose name it is. Apart from that, there are certain ways to recognize a handwritten original autograph.

Sign your own name. The writing is not all one shade, but lightens and darkens as you go up on letters and down on others. Notice the space in between your first and last names, but more importantly notice any personal flourishes you may add such as underlining letters or how you cross your t’s and dot your i’s. These flourishes are tell-tale signs that autograph collectors and dealers compare against ones that have already been authenticated.

Naturally, once a hand-signed autograph is authenticated, scarcity and provenance determine its value. An authentic autograph of Queen Elizabeth II, for example, has a current value of about $5,800, while former President Barack Obama’s autograph is worth about $450. Both are heads of state, but Queen Elizabeth II doesn’t sign anything in public other than official documents and family holiday cards, unlike President Obama. It also depends on what is signed. A personal handwritten letter offers more at auction than a generic typed business card, for example.

Presidents, prime ministers, royalty, sports figures, movie stars and any prominent author, politician, astronaut or celebrity of the day are inundated with requests for autographs. Fans and admirers want that personal connection that an autographed photo, for example, provides. However, there isn’t anyone that can satisfy this relentless demand and do the things they are well known for. Therefore, they have help. 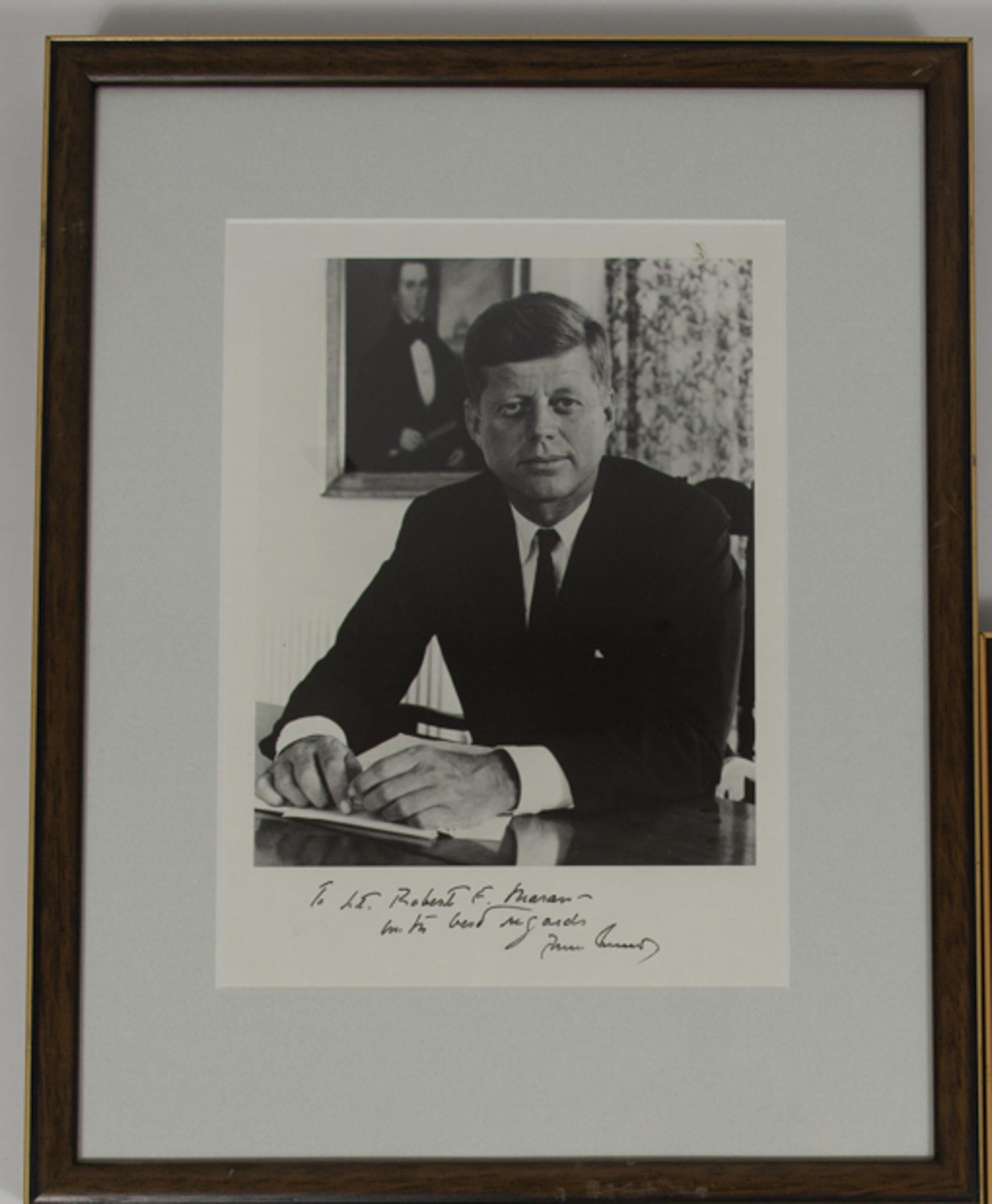 Signed photos of President John F. Kennedy were routinely handwritten and signed by either Jill Cowan or Priscilla Wear, members of his secretarial staff, which are identified by the words and spaces are formed. An example is this photo that recently sold for $200. Image courtesy: Oakridge Auction Gallery and LiveAuctioneers

It is well known that the personal staff of President John F. Kennedy, for example, routinely signed the president’s name on photos, unofficial correspondence, appointments and other routine items. Movie stars of Hollywood’s golden age had staff sign photos by the handful.

Thomas Jefferson famously wrote letters two at a time. As he wrote the original, a wooden machine (a polygraph) attached to his pen wrote the second. The duplicate was his “carbon copy” for his files. The autopen, as it eventually became known, has been upgraded since and used by other presidents as a matter of routine. 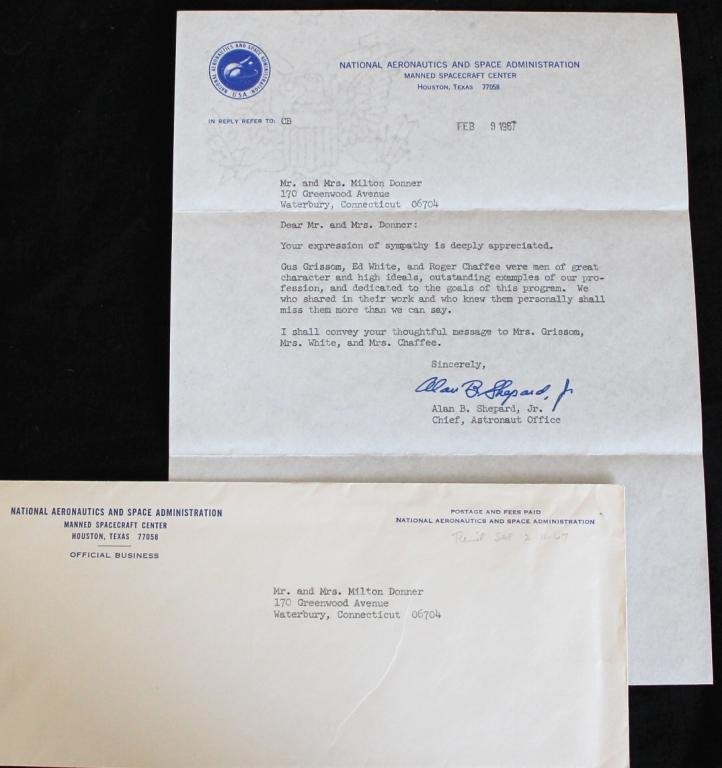 Even though the letter refers to a tragic accident aboard Apollo 1, the signature of Alan Shephard, signed as Chief of the Astronaut Office, was done with an autopen. It sold for $100 + buyer’s premium in 2014 and only because of the historic nature of the content. An authentic Alan Shephard autograph would auction for up to $350. Image courtesy: Lunar Legacy Auctions and LiveAuctioneers

The first president to have used the autopen is reportedly Harry Truman, although it is known that Dwight D. Eisenhower had used it extensively as commander of Allied Forces during World War II and as president. Other celebrities such as astronauts, businessmen and sports figures also routinely sign general correspondence, photos, first day covers and other ephemera with an autopen.

In short, an autopen works by attaching a pen to a holder and an engraved type of large metal piece moves the pen along ridges that simulate a signature. Because the pen does not pick up from the paper while it’s in motion, the signature is one long uninterrupted signature, unlike your own handwritten signature where your pen is picked up and brought down as you sign leaving dark and light impressions.

During the autopen process, sometimes the engraving skips, like a worn record, and squiggles appear when it happens, sometimes noticeable ones and sometimes minor ones, but it is a tell-tale sign of an autopen.

At auction, autopen autographs aren’t usually collectible and are considered as having little value on their own. However, presidential appointments or royal patents with autopen autographs may have more of an historical collectible value. A signed autopen photo made out to an individual will have less of an interest at auction, but it does add color to a family history. 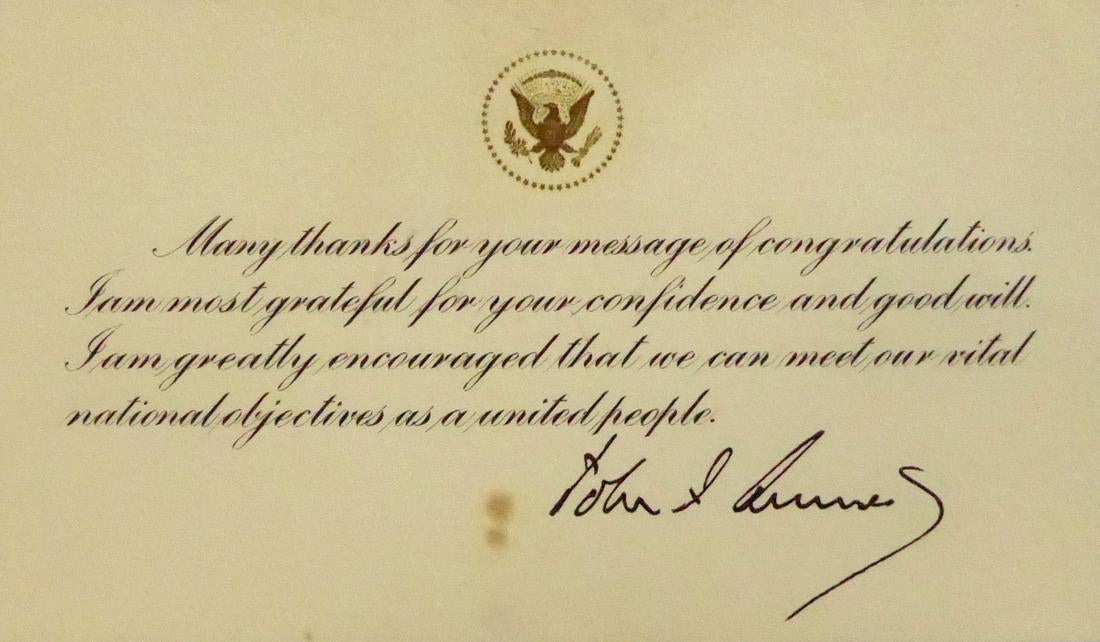 A routine greeting of congratulations from the White House on heavy cardboard featuring the gold embossed presidential coat-of-arms and an example of a raised printed signature of President John F. Kennedy that recently sold for $70 + the buyer’s premium. An authentic signature of JFK would auction for $900 to $1,200. Image courtesy The Written Word Autographs and LiveAuctioneers

The use of a rubber stamp to sign autographs is not unusual. Many heads of state and high-profile personalities have long used stamped signatures. Like the printed autograph, a hand-stamped autograph is more cost effective and less time-consuming than hand-signing. One can sometimes tell a stamped autograph from the smudged ink throughout the autograph and the tell-tale block of ink usually at the ends. 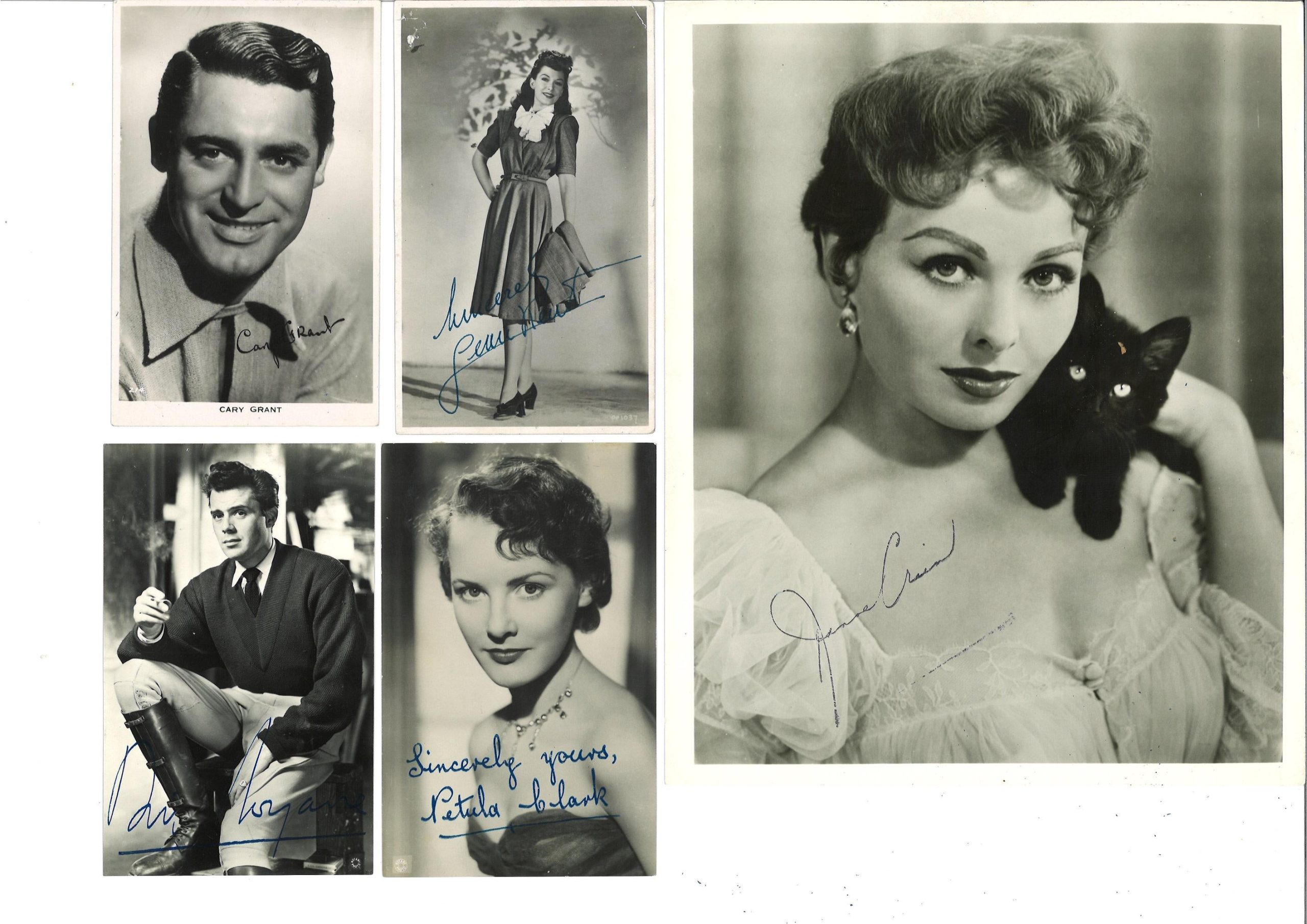 During the golden age of Hollywood, it was routine for studios to provide fans with publicity photos of movie stars with printed or stamped signatures. This collection of 11 pictures sold for about $34 in 2019. The signature of Cary Grant shows a clear use of a stamp. Image courtesy: Chaucer Auctions, UK and LiveAuctioneers

While it is a cost-effective way to meet the demands of admirers and collectors, a printed or stamped autograph has little value. However, it does depend on the photo or item it is printed on. For example, an oversized photograph of Lyndon B. Johnson will have a higher auction value despite its printed autograph because he was a U.S. president, but it won’t have nearly the same value as a hand-signed original.

As in any collectible category, fake autographs are common. The family of Babe Ruth, for example, routinely signed baseballs for him. President John F. Kennedy seldom signed his own name throughout his life, relying on the autopen or staff secretaries to sign for him. In fact, any handwritten autograph of JFK has to be authenticated since it is automatically considered to be signed by his personal staff. Others that are routinely faked are Elvis Presley, the Beatles, Michael Jackson and Walt Disney.

How do you authenticate an autograph? The Universal Autograph Collectors Club (uacc.org), for example, is a trade association listing members and dealers in good standing. “Always use a reputable dealer with a long and proven track record and certificates of authentication. If you are buying online, make sure the dealer lists their full address and contact details,” says Daniel Wade of Paul Fraser Collectibles. Always check online sources, too.

Collecting autographs tells a story. Sometimes it is part of a historical record and sometimes it’s just personal. To enhance your personal story, have an autograph signed on something unusual such as a poster, ticket or newspaper of a special event in order for it to stand out at auction. After all, the story of how you got the autograph is quite collectible, too.