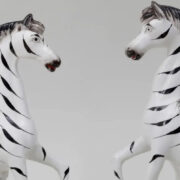 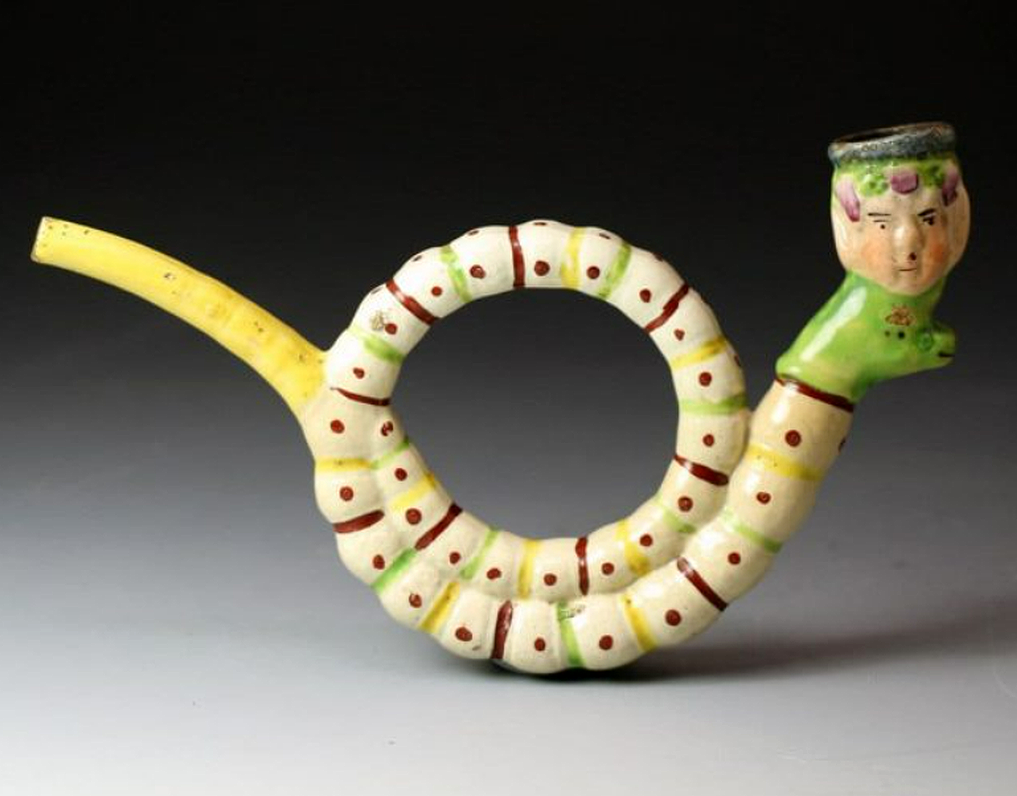 Staffordshire pearlware figure of pipe in the form of a snake featuring figure of a head, ca.1815. Image courtesy John Howard, https://www.antiquepottery.co.uk

Starting in earnest in the 18th century, millions of people left the British countryside to work in bustling towns and cities where there was more opportunity for them. Reflective of the times, enterprising potters in England’s Midlands region started adding functional animal-themed pieces to their existing range of decorative figures as an homage to the pastoral life. Since most of the small pottery works producing these items were located in Staffordshire – a region of rivers where clay was abundant – the wares from all of the studios became known collectively as “Staffordshire/”

Initially, these humble pieces were made of salt-glazed earthenware or stoneware. However, they eventually evolved into finer, thinner, glassy creamware, bluish-white pearlware, and underglaze-painted Prattware. Today, these delightful, functional items are collectible art. 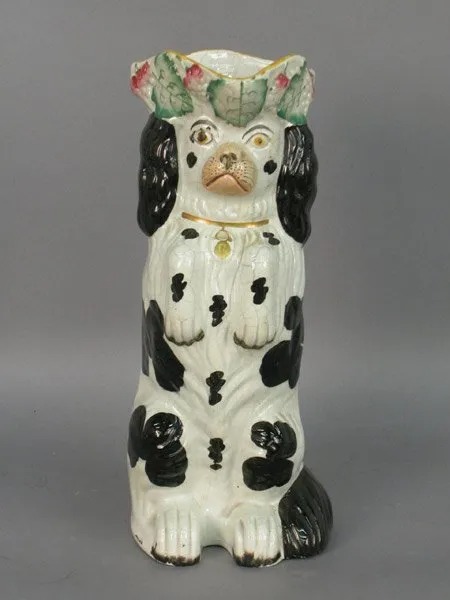 Flamboyant red roosters, molded into trendy 18th-century mustard jars, may have been prestigious in their day. “But happening on an identical pair in original condition, without repairs, was amazing,” explains Jason Woody, Operating Manager and Auctioneer at Woody Auction LLC. “When you think about the amount of time that has passed since they were created, and the fine detail these jars exhibit [including full combs and impossibly fragile “chicken-foot spoons”], these were truly extraordinary finds.” 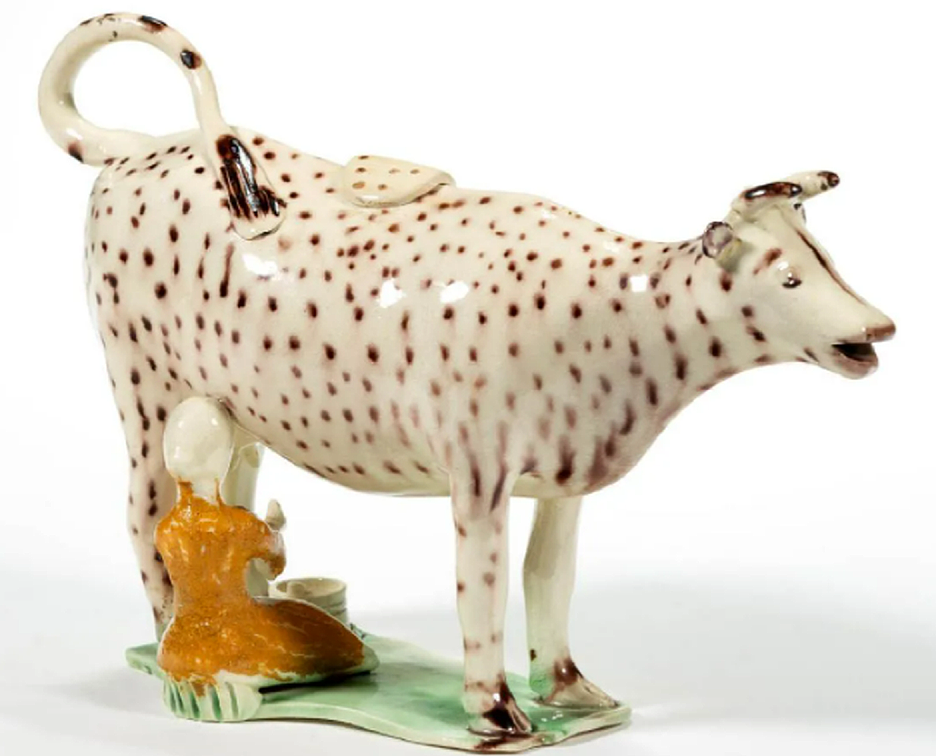 Though all sorts of Staffordshire cat figurines were popular through the 1700s, few, if any, were functional in nature. During the Victorian Era, widely adored King Charles spaniel porcelain sculptures, associated with both King Charles I (1600–1649) and Queen Victoria’s beloved dog Dash, were also purely decorative. 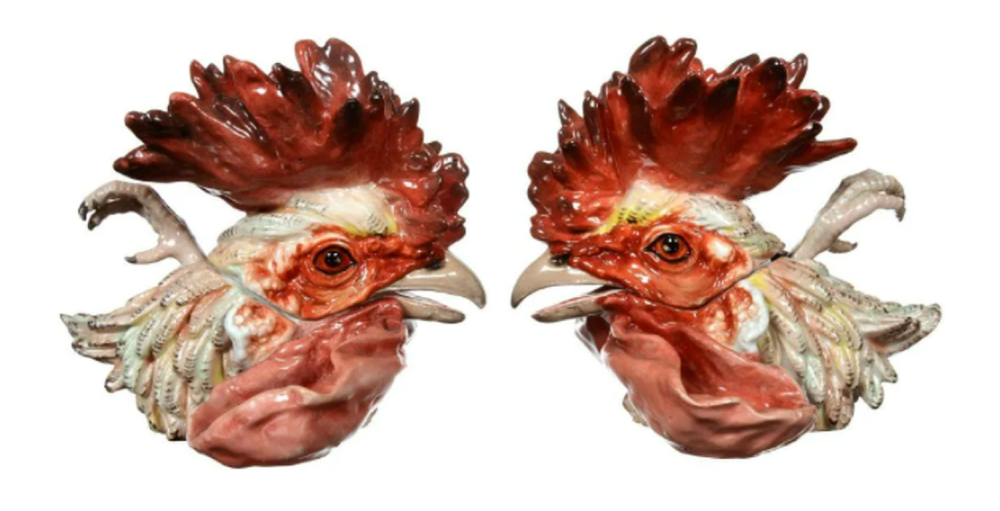 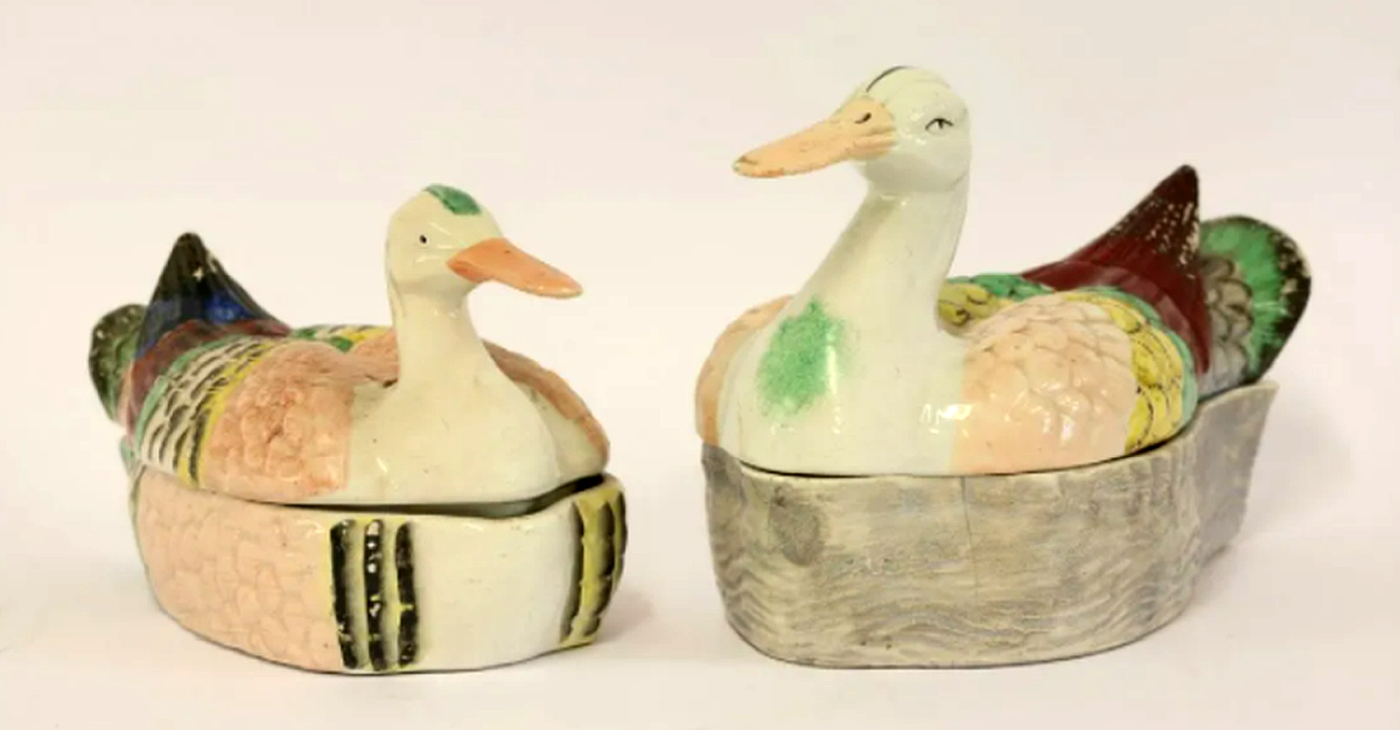 Though these Staffordshire animal-themed, functional charmers fell from fashion by the end of the 19th century, they offer fascinating glimpses of long gone British values, mores, and ways of life.

NEW YORK – Thanks to the plentiful availability of clay, salt, lead and coal in the area, Staffordshire, England became a bustling center of ceramic production starting as far back as the early 1600s. Hundreds of firms make all manner of pottery, from tableware and decorative pieces to more industrial items. Earthenware, stoneware and porcelain were all produced in huge quantities and Staffordshire became a major innovator of bone china, jasperware, transfer printing and glazing.

Staffordshire had a major advantage over other potteries of the day: it was the strongest in the middle and low-price ranges (although fine and expensive types were also made). It was the affordability factor that helped propel North Staffordshire to the largest producer of ceramics in all of Britain by the late 18th century, even though there were many significant centers elsewhere. Starting in the 1800s, large export markets took Staffordshire pottery literally around the world. 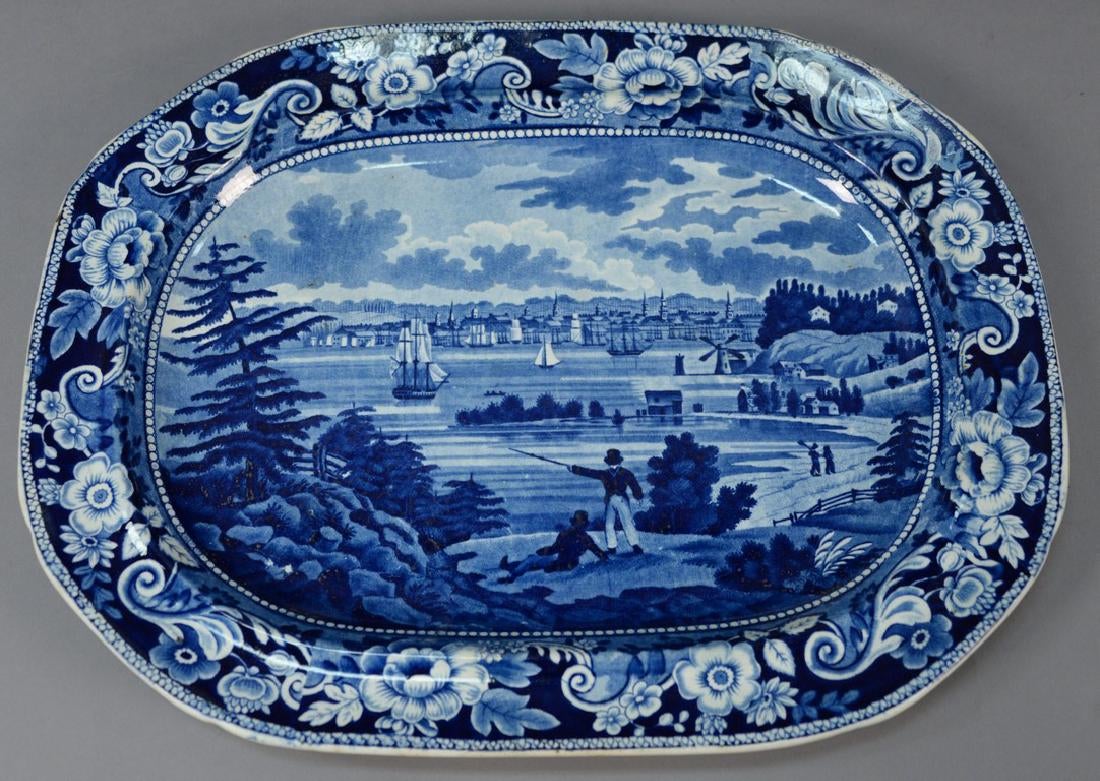 Blue Staffordshire is what caught on most quickly with the buying public, for its deep, rich color and gorgeous, intricate patterns. Flow blue was a style of white earthenware that originated in the Regency era, sometime in the 1820s, also in Staffordshire. The name was derived from the blue glaze that blurred or “flowed” during the firing process. Most flow blue could be categorized as transferware, as the decorative patterns were applied with a paper stencil to white-glazed blanks.

“Blue and white is a timeless combination that will be popular in perpetuity, for its classic elegance and versatility,” said Pam Briggs, a pottery and porcelain specialist with Leland Little Auctions in Hillsborough, N.C. “The blue transferware styles adopted by makers like Staffordshire in the 18th and 19th centuries made finely decorated tableware accessible to an ever-growing middle class.” 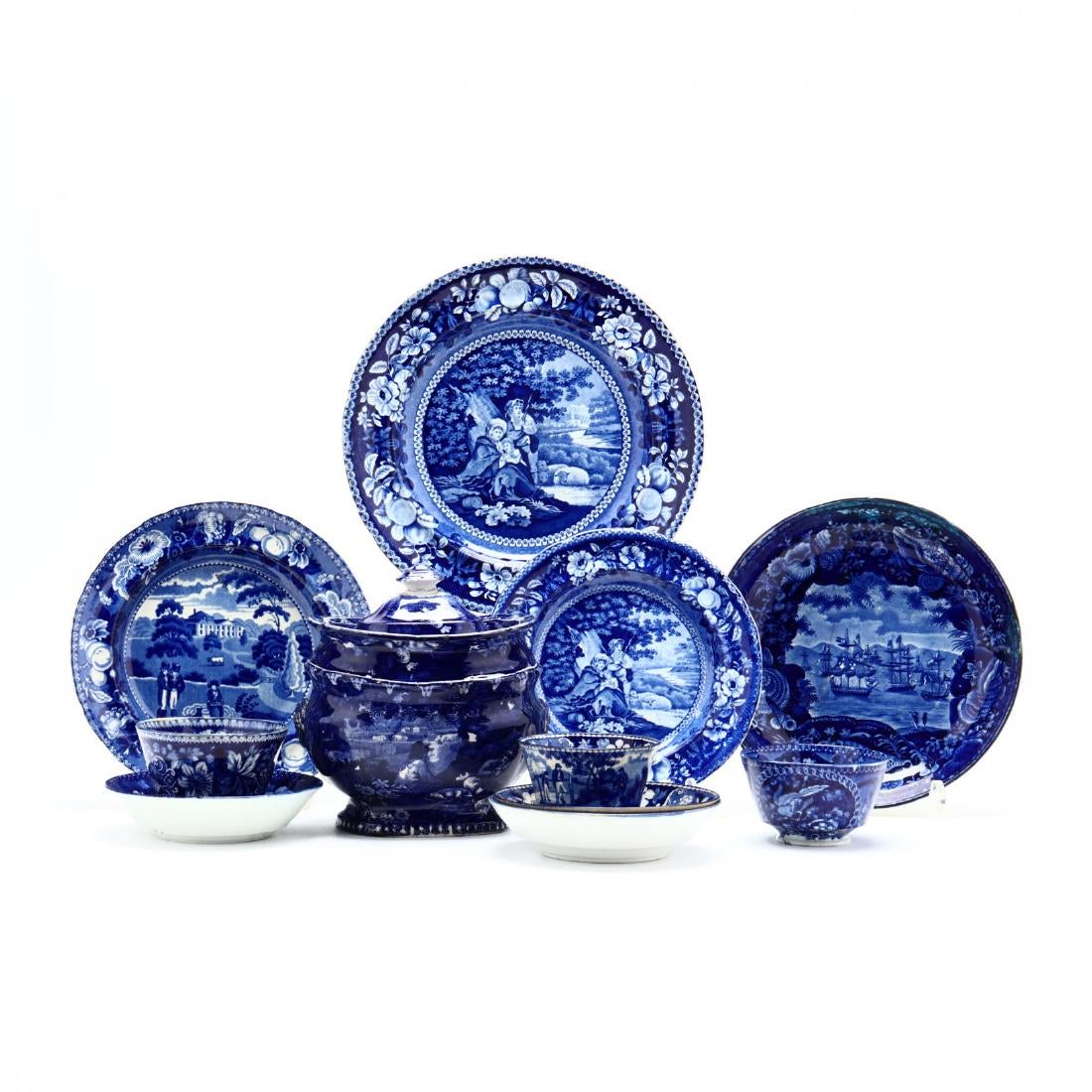 Briggs added, “Traditional designs have lost some popularity in the past 15 years but have recently made a comeback as consumers begin to incorporate classic elements in their home décor to soften other, more modern pieces. The blue Staffordshire pieces that command the highest prices, and are most likely to hold value, are those with historical interest, like ones that depict a landmark building or scene, or those that evoke a personal connection with buyers.”

The multi-cultural element that went into the development of blue Staffordshire was explained by Tom Curran of Litchfield Auctions in Litchfield, Conn. “There’s a reason it’s called royal blue, particularly in England,” Curran said. “Historically expensive, the pigments were originally from the Middle East and used to decorate pottery with classic Islamic motifs, then perfected by the Chinese with their discovery of porcelain. Added to the enormous risks and expense of the early China trade was the closely guarded secret of porcelain.” 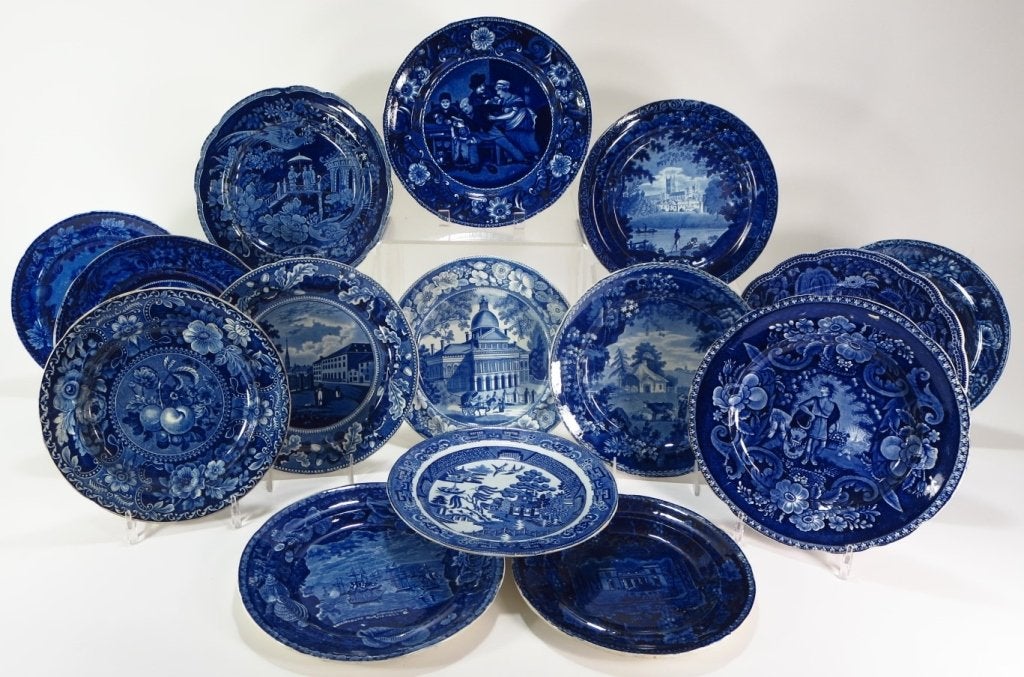 He went on, “So, blue and white ceramics just screamed class and wealth and we saw the Dutch first copying the Chinese with primitive pottery imitations from Delft. In the 19th century, English potteries in Staffordshire found a huge demand among the general population for affordable imitations of the fine porcelain owned by the upper classes, with blue and white remaining the standard. Even when porcelain and bone china became more common and affordable, the charm of antique Staffordshire made it appealing to 20th century antique collectors for their mantels, china cabinets and plate racks.”

Not today though, Curran remarked. “Antique Staffordshire often has minute chips, crazing and knife scratches, isn’t dishwasher or microwave safe and screams ‘grandma.’ So, collections built over the years have plummeted in appeal and value contrasted with decorative blue and white Chinese ceramics still warm from the kiln stepping in at Walmart and T.J. Maxx prices.” 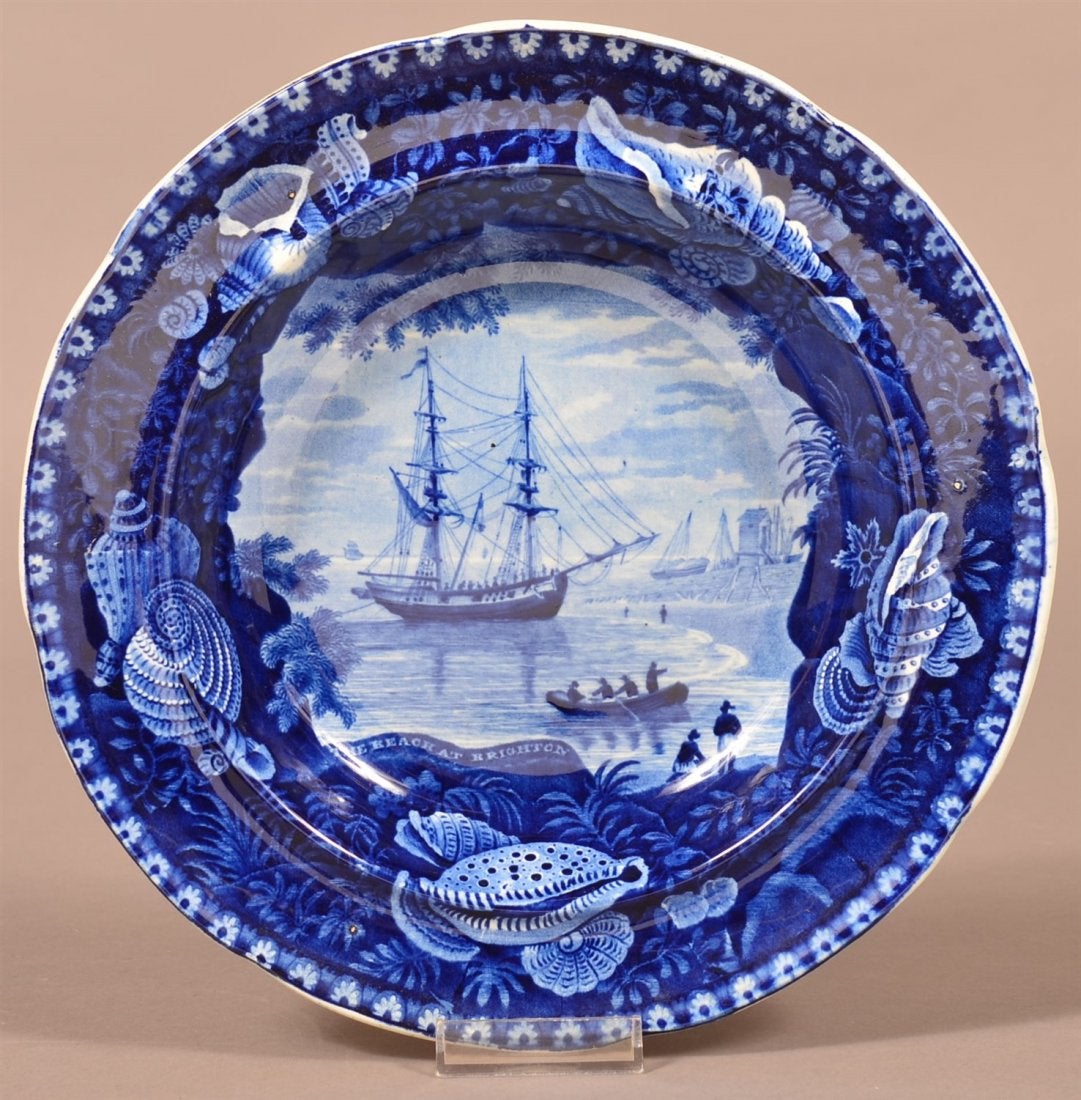 In his experience, Curran concluded, “It’s unusual subjects and the earliest examples of American historical or commemorative subjects that still sell decently – John Paul Jones, the Boston Massacre, General Lafayette. While the prices aren’t what they were, they’re still terrific examples of the creativity and marketing reach of the Staffordshire potteries of the 19th century.”

Joseph Perron of Merrill’s Auctions in Williston, Vermont, said the intense blue hues of early Staffordshire held an appeal for both collectors and decorators alike, one that endures today. “Whether it be a small arrangement of blue Staffordshire items on a wall or a shelf, or a large collection in a cabinet, their rich colors can have a truly dramatic effect in a room,” he said. 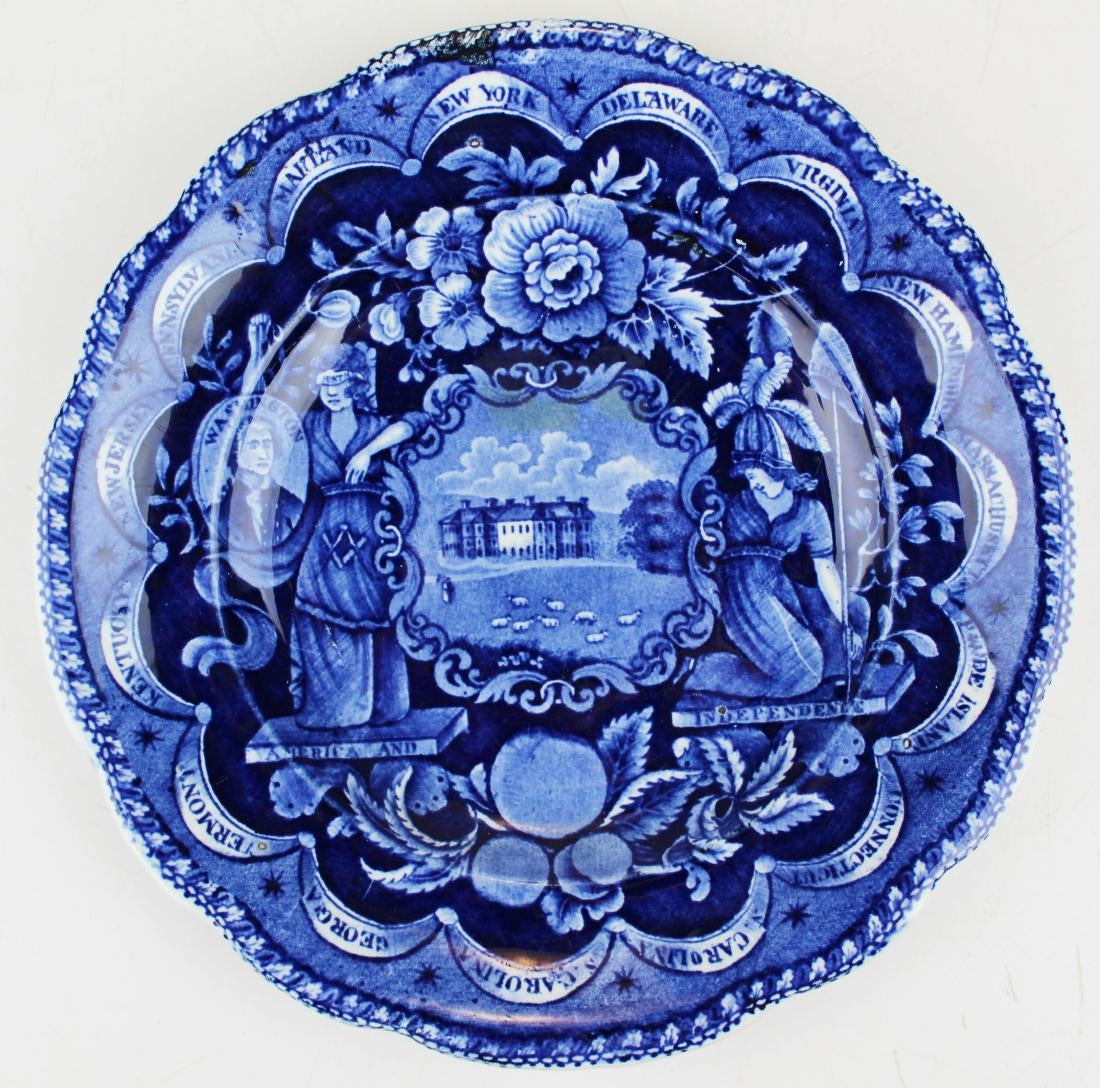 “Also, despite massive quantities of this type of ware being exported to the American market in the 19th century, due to the delicate nature of the porcelain, it is quite remarkable that any of it survives, which makes it all the more coveted by collectors. The combination of the potter’s art combined with the skill of the printmaker executing the transfer designs also broadens the appeal of this type of porcelain. Strong visual themes delight the collector, and detailed depictions of historic events appeal to those seeking a greater understanding of the past.”

As most of the best examples of blue Staffordshire are now in public and private collections, Perron believes the opportunity for discovery of unknown or scarce examples becomes rare, so collectors will compete more for the best examples when they come to the market. “However,” he said, “condition and subject matter will continue to be important drivers of demand. Unusual forms and scenery will continue to demand increasing prices, but more average examples with heavily floral decoration may stagnate.” 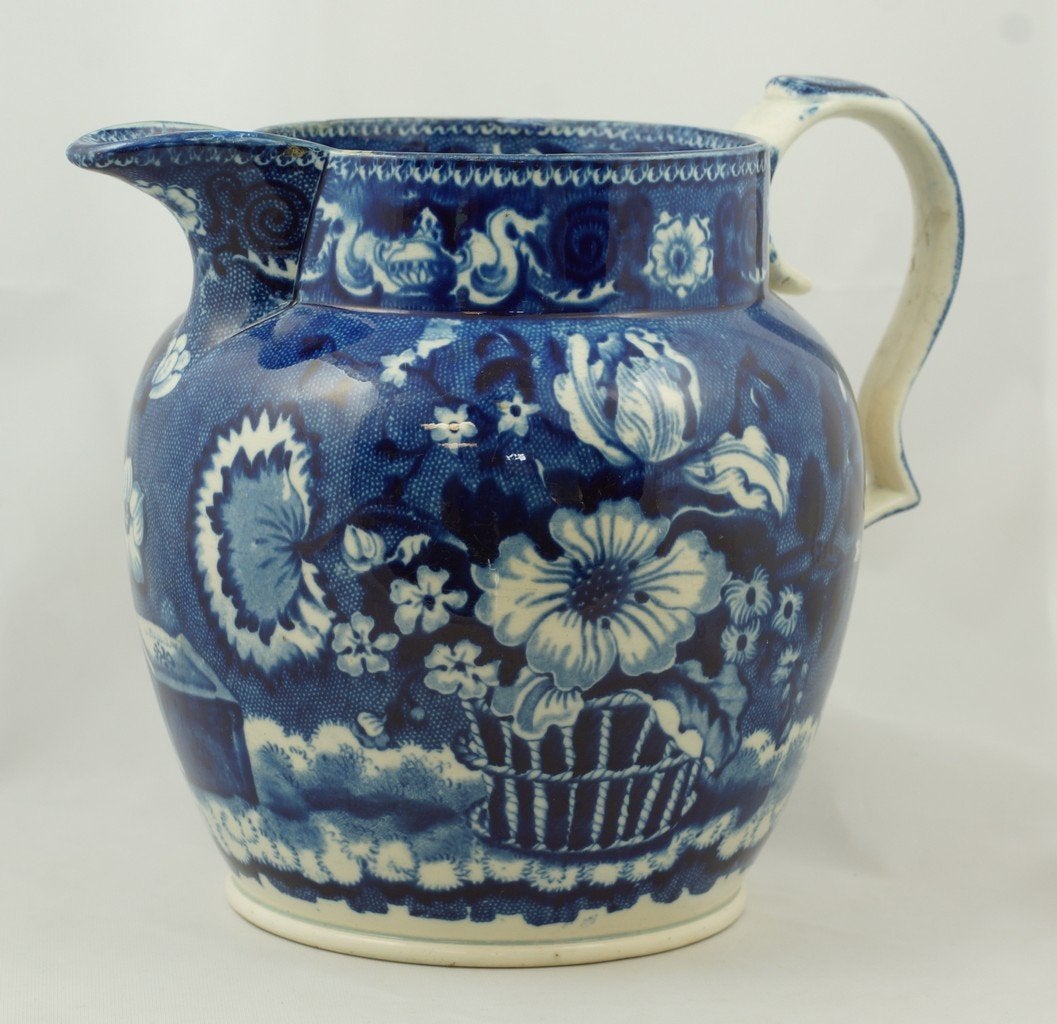 Perron added, “We see collectors particularly interested in pieces with fantastical depictions of quadruped animals because they’re flamboyantly graphic and employ an endearingly naive sensibility about what was considered ‘rare’ and ‘exotic’ in the 19th century. The historical scene decorated pieces were produced in less quantity than the more typical wares to begin with, so their desirability by collectors will continue to increase. It seems that this type of porcelain is an exception to many other ceramics in that it will continue to hold appeal to both older and younger buyers.

Production of blue Staffordshire, which had already begun to decline in the late 19th century, took severe hits during and following World Wars I and II. Some production in the area still continues to this day, but only a fraction of what it was during its peak years and heyday. 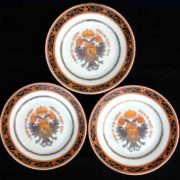 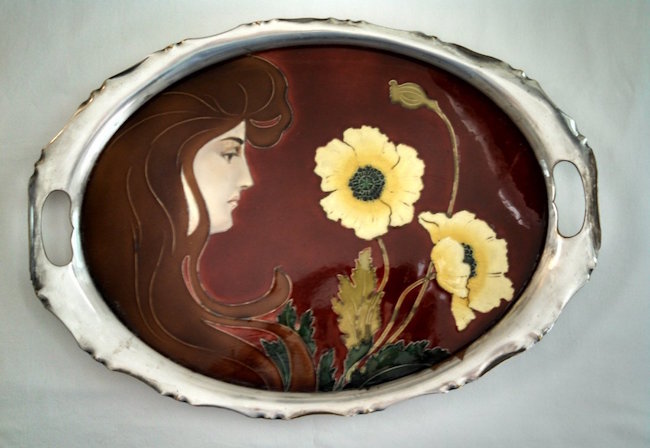 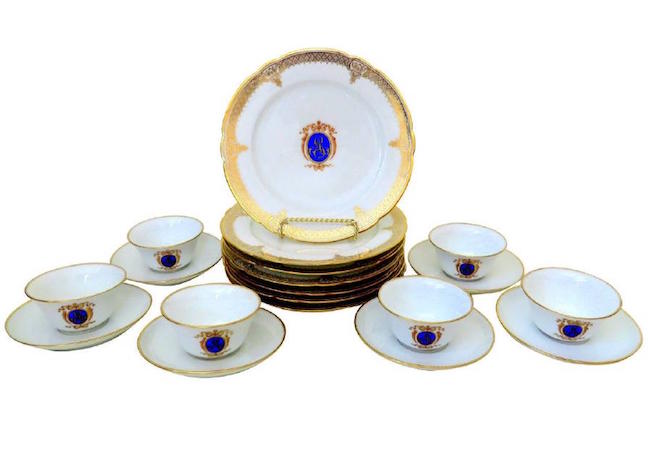 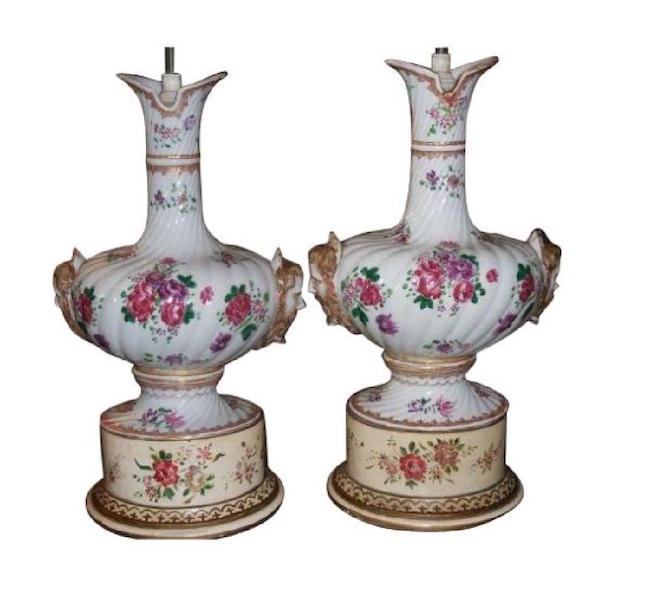 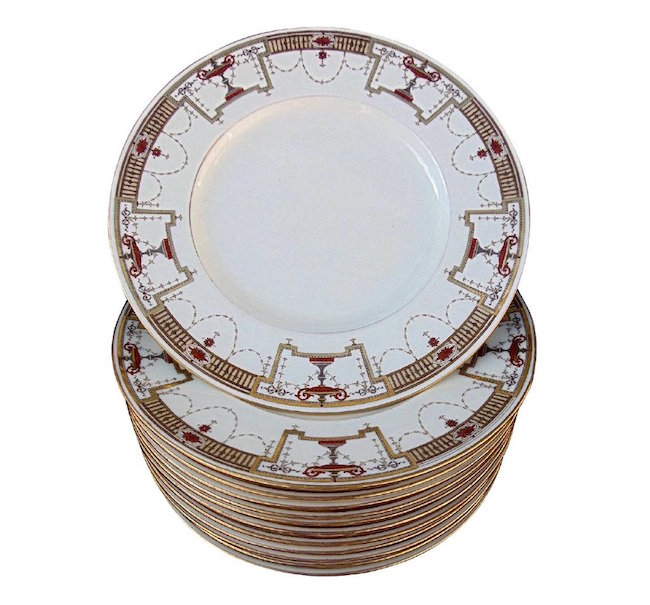 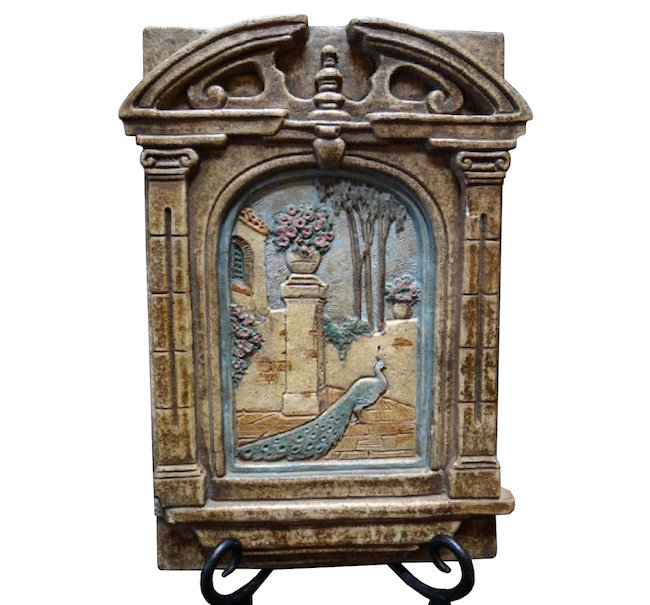