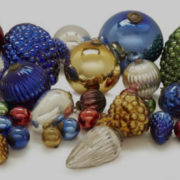 NEW YORK – Christmas is a time of vibrant color in a season of cold and snow. Revelers can invite the warmth of the holiday to filter through the sparkle of glass ornaments, especially antique ones known as kugels.

Every family has holiday traditions and stories that are passed down through generations. Most are oral tales of family lore, but fanciful kugels tell stories, too. It’s also been suggested that before they became a Christmas tradition, kugels may have held a more ethereal secret. 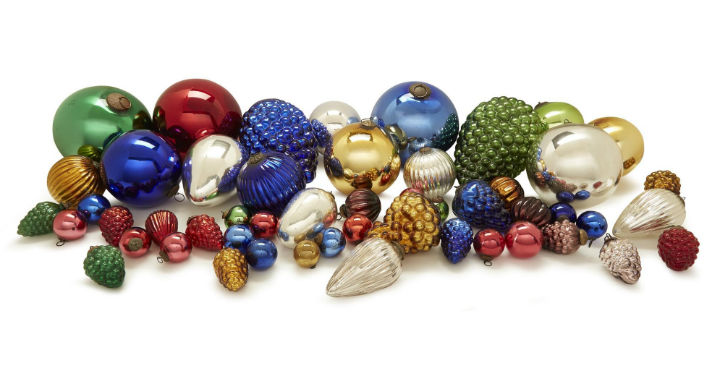 A large group of vintage German, French and Indian kugels from the late 19th to early 20th century with various sizes and colors sold as a group for nearly $5,200 on Nov. 12, 2019. Freeman’s and LiveAuctioneers image

In 17th century England, inhabitants thought the countryside was rife with witches. Unseen and always up to mischief, these witches needed to be kept far away from hearth and home. And since witches were known to be wary of circular shapes, legend says, a round, sometimes silvered, glass “witch ball” was hung in windows, along ceilings and even as large silvered gazing balls in the garden to keep these evil troublemakers at bay. 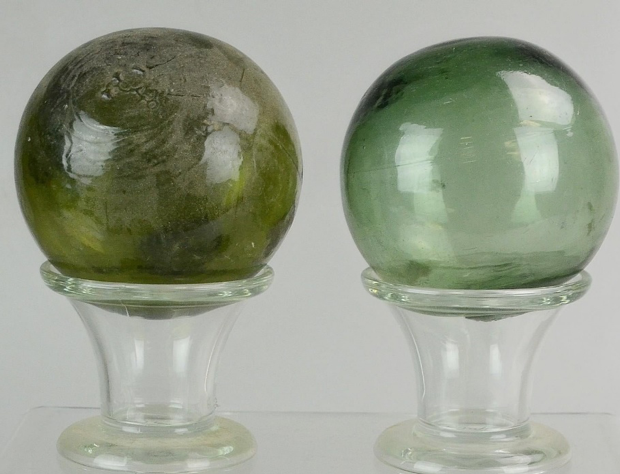 Large, clear hand-blown glass balls similar to these were used in the 17th century as a talisman to ward off witches. They may have influenced more radiant, mirror-like figural Christmas ornaments by the mid-19th century. William Bunch Auction & Appraisals and LiveAuctioneers image

At the same time an early winter holiday tradition meant the hanging of the greens in homes and churches. Since the Egyptians, evergreen branches have been a symbol of everlasting life. They were brought inside and decorated for the holidays with oranges, apples, candles and sweets as early as the 15th century. When the fir tree was brought indoors for the Christmas holiday beginning in the early 19th century, it may just be an old folk tale, but the colorful witch ball easily transitioned from a personal guardian into a smaller, more festive holiday decoration to bring color and life to the evergreens and the fir tree.

Folk tale or not, glassblowers in Lauscha, Germany, in the early 19th century were making fashionable glass beads, bottles, scientific glass instruments and, of course, the round glass witch balls. Once the indoor trees and evergreens became a holiday tradition by 1847, they transitioned into creating colorful glass balls for decoration. Not long after, the glass balls were lined inside with silver nitrate, tin or even lead to give them a rather distinctive mirror-like finish where they positively glowed near the ubiquitous candlelight of the period. And a delightful holiday tradition was born. 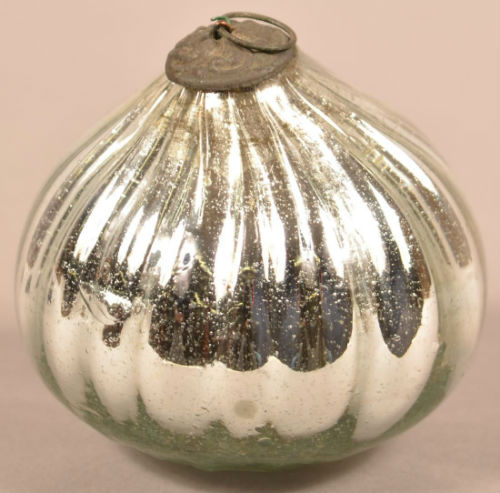 Once the glass ornaments were widely accepted, the glass blowers became more creative and pressed glowing hot glass into molds such as a bunch of grapes, eggs, pears, berries, vegetables and even pinecone shapes. Each was hand blown with various vibrant colors from either colored glass, hand-painted on the outside or later sprayed on with a colored lacquer. These kugels (German for round ball), as they became known, were heavy and durable and remained a holiday tradition until about 1890. By then kugel production moved to Nancy, France, where their own lighter, more colorful versions, known as Boules Panoramic, predominated until the 1920s.

Because of their long-lasting durability, radiant color and simple designs, kugels are a collector’s favorite, and auction values in recent years reflect that interest. Collectors, like goldenglow.org and kugelhouse.com, express agreement that color is the first criteria for collectors when determining value. The more easily obtainable are clear glass with only the silver lining along with gold, green, cobalt, most shades of blue and most red colors, although pink is rarer. Darker reds and greens, copper colors, orange and amethyst are hardest to find. 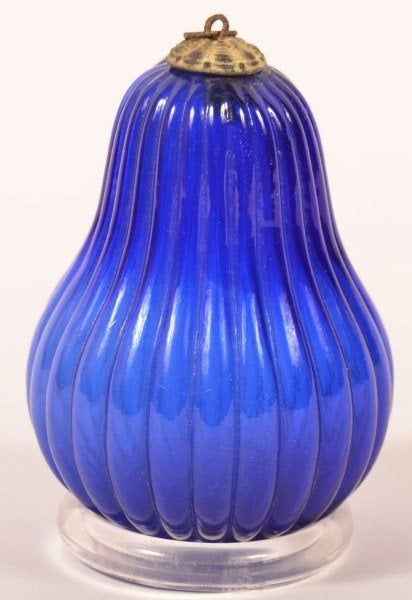 Shapes are the next criteria after color. Balls and grapes are the most common. Egg, pear and teardrop shapes and ones with ribbed forms are particularly desirable. Any other shapes, such as vegetables, fruits or pinecones, are the really rare ones.

Condition matters, too. “When collecting kugels, try to avoid pieces where the lining has disintegrated. On rarer pieces collectors will often look the other way if the lining is in bad shape, but the reality is that if you try to sell the piece, you may not be able to get a good price with a bad lining,” according to goldenglow.com, a specialist website dedicated to all things Christmas. 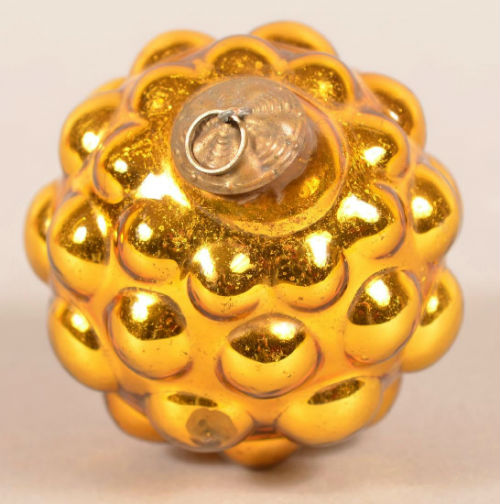 And beware of reproductions. Vintage kugels made in Germany or France from 1840s to about 1900 were made with a smooth, cut finished hole at the top flush with the ornament. A smooth or embossed brass cap fit easily over the hole with a brass, pronged wire holding the cap against the ornament. A round brass wire fit through the top of the pronged one to hang from the tree that will have aged naturally. Recent reproductions from India were made with a rougher, protruding neck over the hole with the brass cap obviously aged artificially. Vintage kugels are made with thicker glass while thinner ones were made after 1918.

Whether rare or not, vintage kugels are a decorator choice for the Christmas holidays. Featured as a table centerpiece with candlelight, hung from light fixtures, catching light from open windows, formed into wreaths or simply hung on the tree with care, kugels bring a magic of color, brightness and good spirits inside while the weather outside is frightful. There just might be something to the folk tale after all.

Your Christmas tree is the center of your home for a few weeks out of the year. Whether decorated with simple lights, popcorn strings, or family heirloom ornaments, the tree sparkles with tradition. German-American families enjoy the tradition of the Christmas pickle. On Christmas Eve, after the children have gone to bed, parents hide a pickle ornament deep in the branches of their decorated tree. On Christmas morning, the first child to locate the pickle receives an extra gift from Santa.

This season is an opportunity to add some extra charm and delight to your tree. Below are 6 Americana ornaments to dazzle your trimmings:

Man in the Moon

When this moon hits your eye, there will definitely be amoré. Enjoy this hand-blown sparkler from the 1940s. 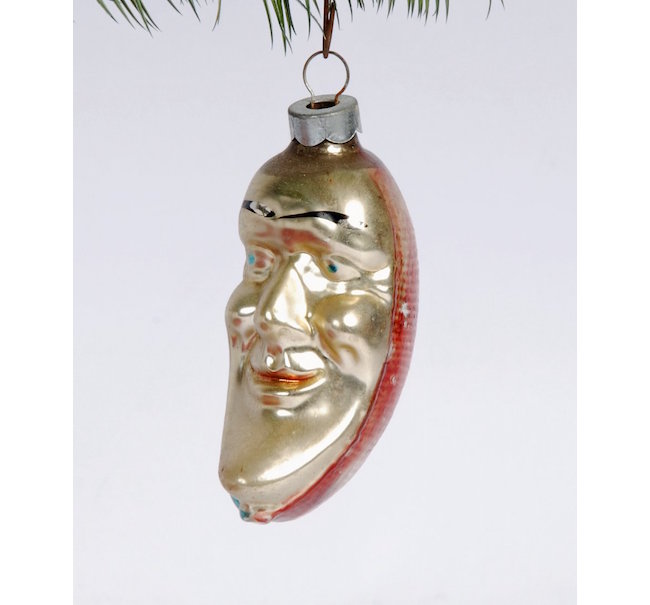 So adorable you almost want to drink tea out of it. 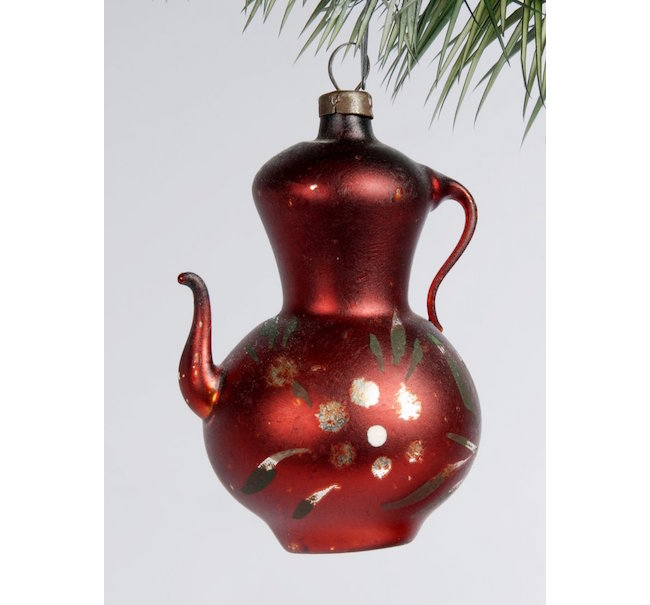 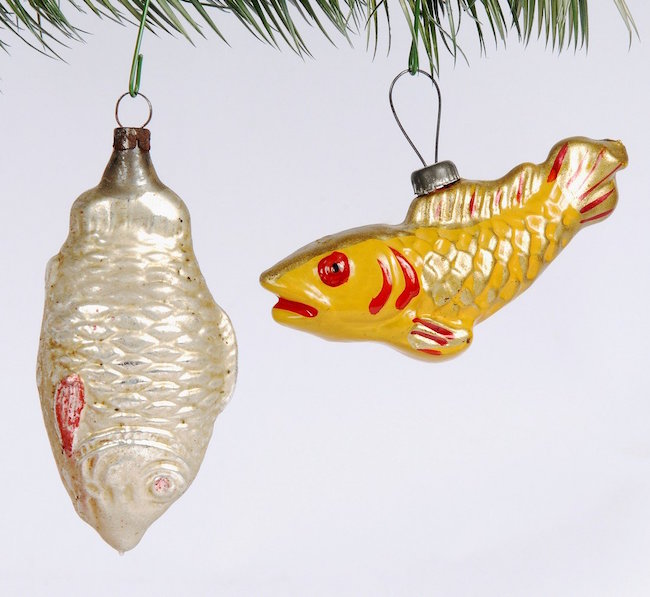 This is probably the ornament you’ve always wished you had. 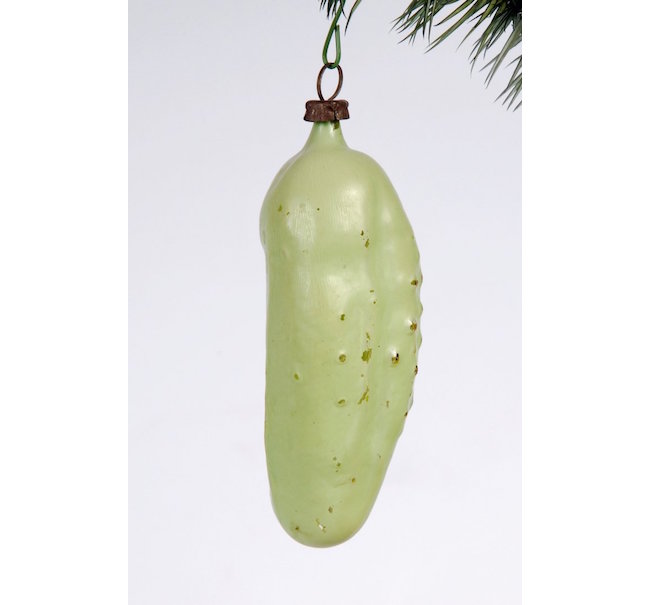 These vintage buddies add sparkle and a certain unique charm to your tree. 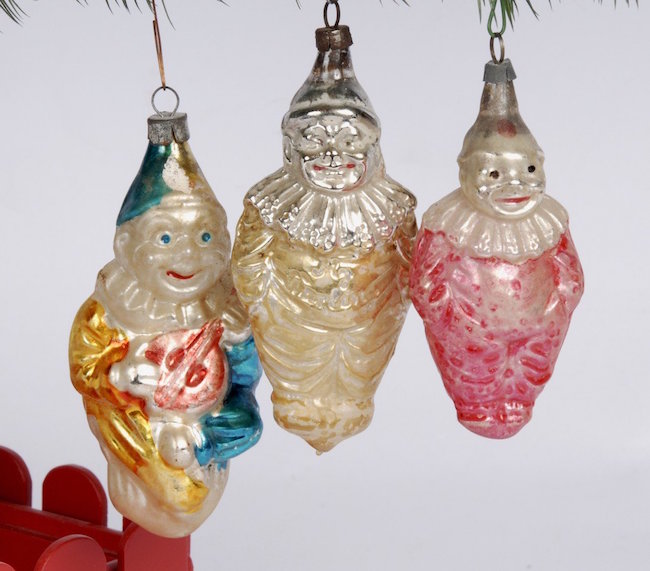 Ok, this is a doorstop and not an ornament. While you cannot hang it on your tree, adding this to your home holiday decor adds extra flair. Ho ho ho! 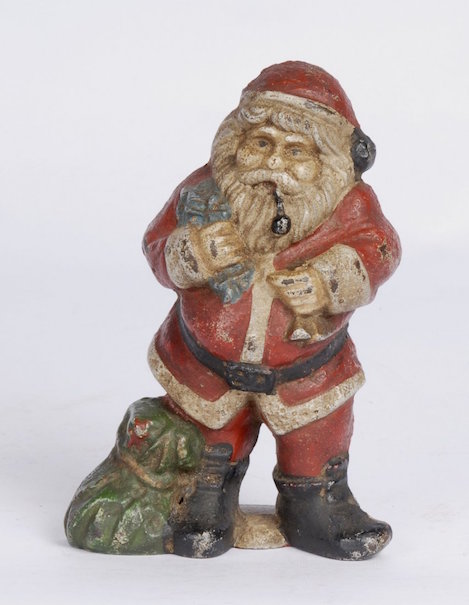