It would be hard to imagine Art Deco pottery without the brilliantly-hued palette of British artist Clarice Cliff (1899-1972). From the tender age of 13, Cliff worked as a gilder at a site in Stoke-on-Trent, England known as “the potteries,” applying conventional patterns to ceramic wares.

At age 17, the ambitious, working-class teenager relocated to the A.J. Wilkinson pottery works to expand her creative skills. Cliff soon became a modeler, working as part of a team of designers that was otherwise exclusively male. With the support and sponsorship of factory co-manager Colley Shorter – who later married Cliff – she was able to study briefly at the Royal College of Art in London and, later, visit Paris, where she absorbed the Art Deco aesthetic like a sponge. She returned to England with sketchbooks filled with ideas inspired by what she had seen on the Continent. This Clarice Cliff for Newport Pottery House and Bridge vase with printed Bizarre marks realized £950 (about $1,100) plus the buyer’s premium in October 2020. Image courtesy of Kinghams Auctioneers and LiveAuctioneers

In 1927, the Cliff was granted her own studio at nearby Newport Pottery and was allowed to cover imperfections on defective whiteware any way she wished. She drew bright, daring, triangular freehand designs, dubbing them “Bizarres.” 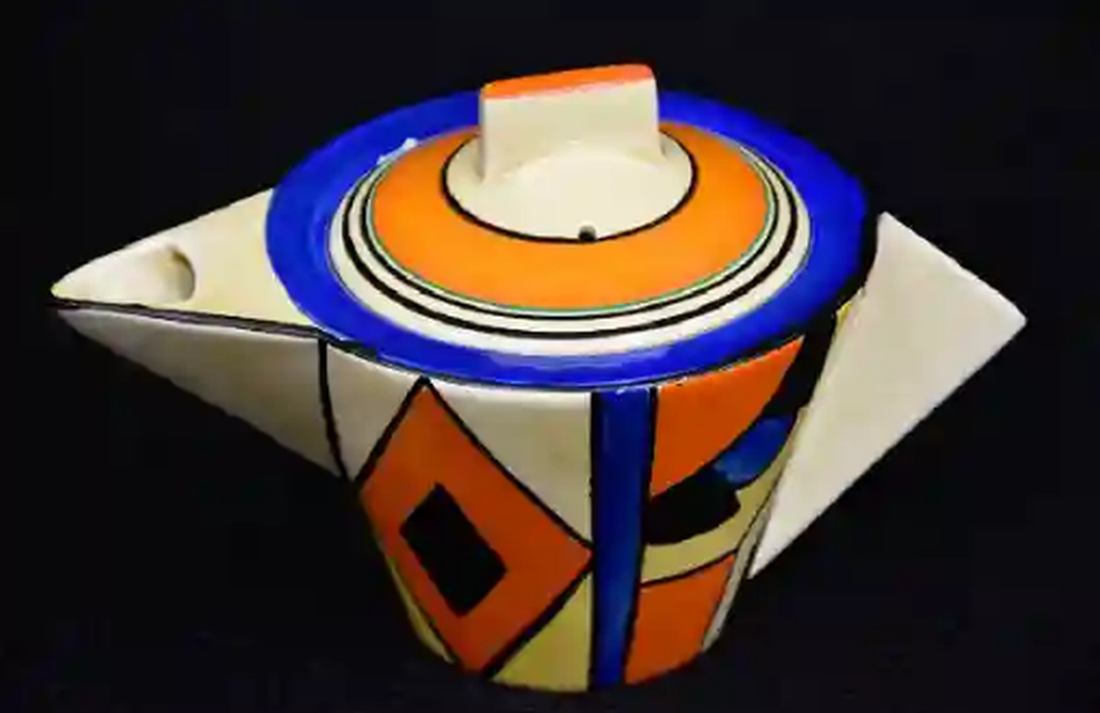 In the late 1920s, Cliff launched Bizarre Ware, her own line of candlesticks, dinnerware, and service sets for the home, rendered in a vibrant range of colors. Hand-painted by an all-woman team of decorators known as “the Bizarre girls,” these pieces stamped with Cliff’s signature were an immediate success and remained so despite the financial challenges of the Great Depression. Celebrity and royal endorsements, in-store painting events, and media coverage trumpeting her rags-to-riches backstory turned Clarice Cliff into a household name. 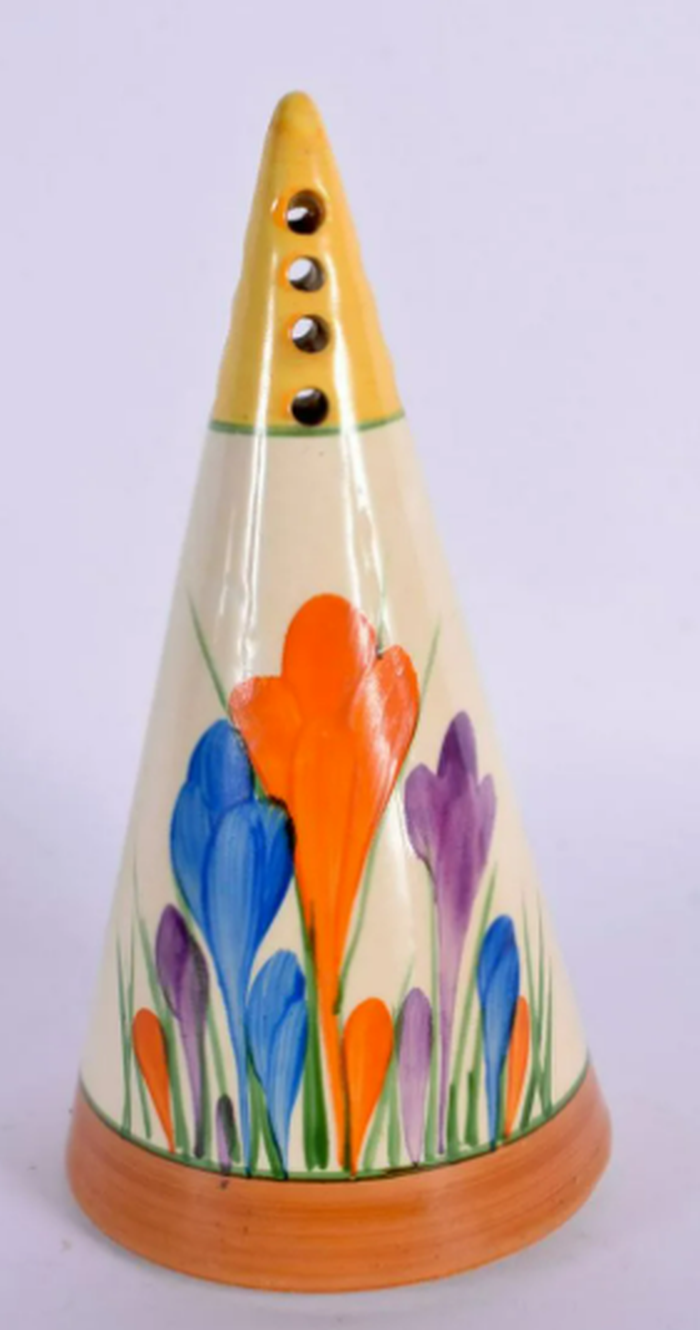 This Clarice Cliff Bizarre Crocus sugar sifter sold for £190 (about $231) plus the buyer’s premium in July 2022. Image courtesy Hannam’s Auctioneers Ltd and LiveAuctioneers

Many of Cliff’s forms, such as her conical sugar sifters and triangular-handled teapots, were based on fashionable Art Deco elements. Others, such as her Flora wall masques and Cruise Liner vases, were fancies that sprang from her imagination. A Bizarre by Clarice Cliff Art Deco pottery jug sold for $2,600 plus the buyer’s premium in May 2019. Image courtesy of Antiques & Art International and LiveAuctioneers.

Cliff’s more conventionally-shaped biscuit barrels, cream jugs, chargers, jardinieres, vases, serving bowls and water pitchers boast a range of attractive patterns that are unmistakably her own. Some, such as Ravel, a leaf-and-flower motif named for the French composer of Bolero, are angular and abstract. Others, such as the 1928 pattern Crocus, a traditional pattern that was Cliff’s longest-produced design, feature purple, blue, and orange upward brush strokes amid slender green stems. Crocus became the standard dinnerware set for newlyweds and proved so popular, it was followed by variations known as Purple Crocus, Blue Crocus and Spring Crocus. 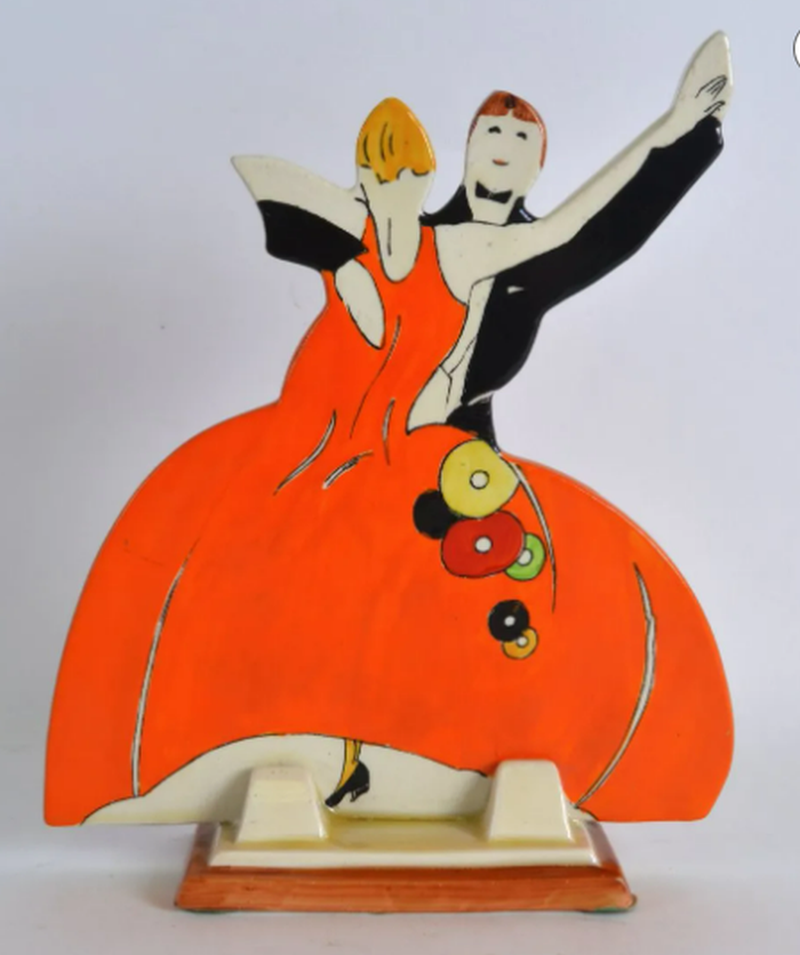 A Clarice Cliff Age of Jazz figural piece achieved £7,800 (about $9,496) plus the buyer’s premium in August 2016. Image courtesy of
Hannam’s Auctioneers Ltd and LiveAuctioneers

Cliff’s Age of Jazz series, celebrating that era’s exuberant musicians and dancers, represents a rare foray into figurative pieces. Few were made and fewer have survived. When they come to auction, they ignite fierce bidding wars. In August 2016, an example depicting formally-dressed ballroom dancers on a rectangular base achieved £7,800, or about $9,496, against an estimate of £3,000-£5,000 at Hannam’s Auctioneers Ltd. in Selborne, England. 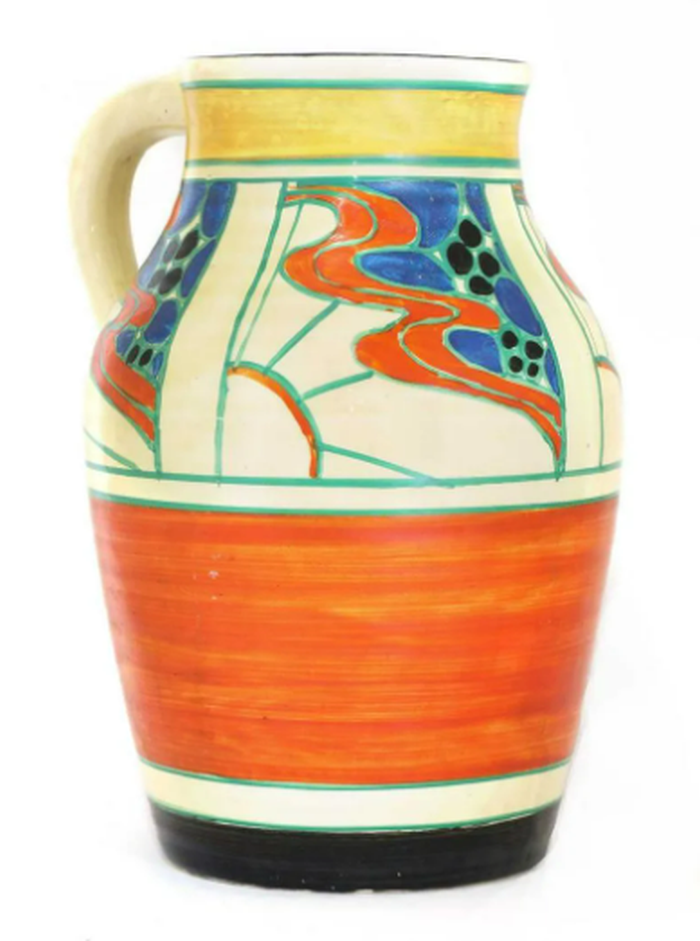 This Clarice Cliff Sunrise Lotus jug with a printed Fantasque mark earned £1,000 (about $1,206) plus the buyer’s premium in July 2022. Image courtesy of Sworders Fine Art Auctioneers and LiveAuctioneers 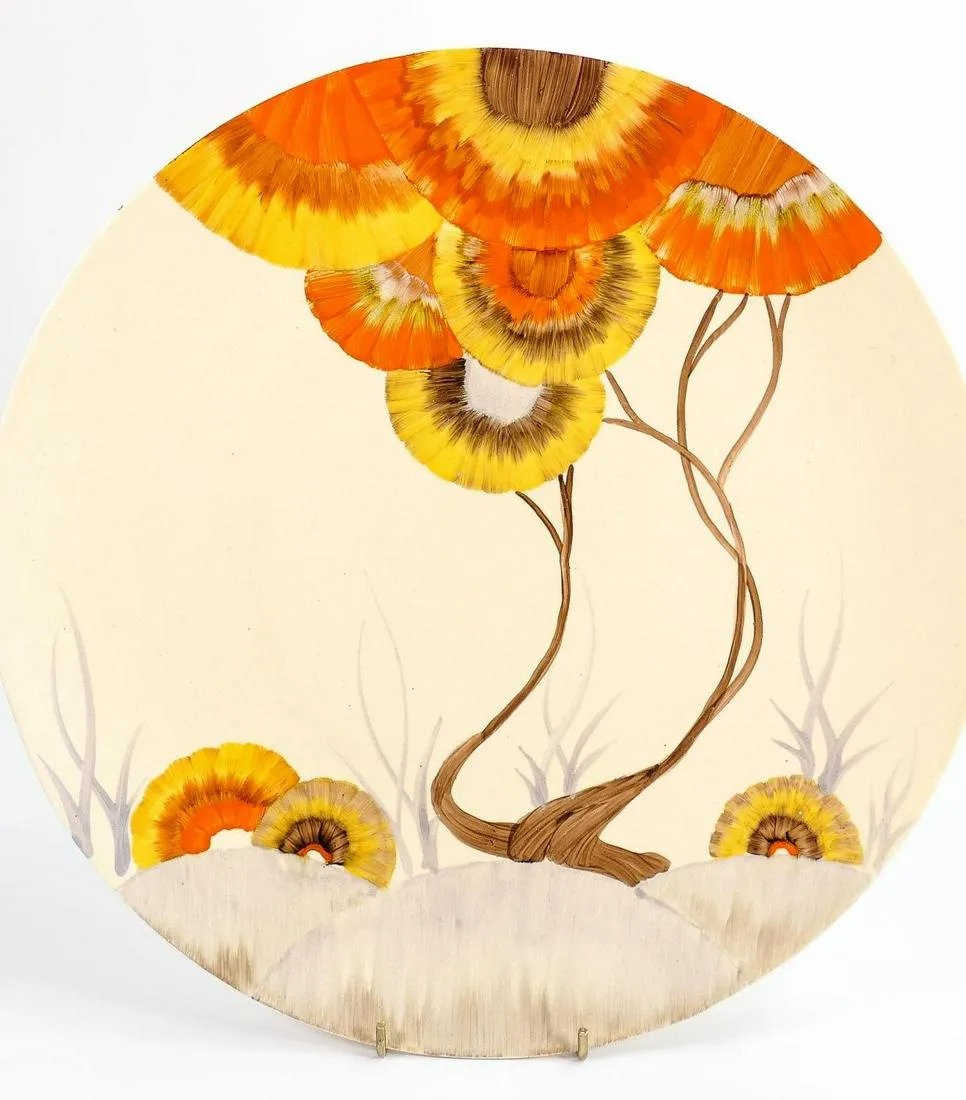 A Clarice Cliff charger in the Rhodanthe design sold for £140 (about $169) plus the buyer’s premium in July 2022. Image courtesy of Potteries Auctions Ltd and LiveAuctioneers

Hundreds of imaginative Clarice Cliff patterns were created. Some of the chargers she produced for A.J. Wilkinson display subtly undulating images of rhodanthes, or pink daisies. Her Melon and Circle Tree patterns, which decorated bowls, beakers and jam pots, are graced with plump, Cubist-inspired orbs that have angular geometric accents. The Honolulu pattern, seen on pin trays, napkin rings and a variety of vases, features lush yellow, red and orange-topped trees evocative of a tropical paradise, while Cliff’s paler pink and blue versions evoke Hawaiian sunsets. Standing 18 inches tall and possibly a unique example, a 1933 Clarice Cliff Honolulu charger made £4,000 (about $4,900) plus the buyer’s premium in October 2019. Image courtesy of Cheffins and LiveAuctioneers

Cliff’s Chintz pattern, based on floral motifs popular in England, is marked by large, bright, stylized flowers and foliage in shades of blue, green, coral, orange and yellow with matching banding. Cliff’s Harvest pieces, adorned with appliqued bits of fruit and corn, are perennial pleasers. So, too are Cliff’s exquisite ribbed Raffia Indiana jugs, pots, vases and art pottery, which were inspired by the forms and hues of traditional Native American basket wares. 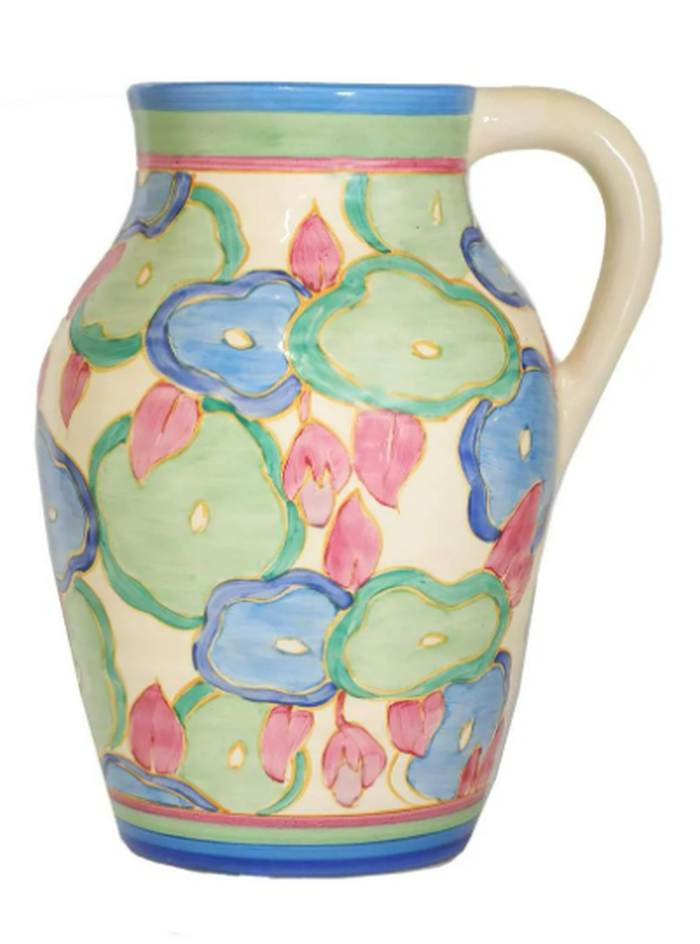 A Clarice Cliff Blue Chintz Isis jug with a printed Bizarre mark earned £900 (about $1,096) plus the buyer’s premium in July 2022. Image courtesy of Sworders Fine Art Auctioneers and LiveAuctioneers

Clarice Cliff’s creations continue to enchant new fans on both sides of the Atlantic, as does her personal story, evidenced by the November 2021 release of the film The Colour Room, starring Bridgerton’s Phoebe Dynevor as Cliff. Indeed, she ranks as one of the most significant ceramic artists of the 20th century – a hard-won honor for a determined Brit of humble birth.