Tramp art is a lot of things but one thing it is not is a style of art produced largely by tramps, hobos and vagabonds. Despite what its name seems to imply, sometimes a memorable moniker is not necessarily an accurate indicator of origin.

“The name is a misnomer – more of a romantic notion about folk art from the 1950s and before about folk art,” said Clifford A. Wallach, a longtime dealer and historian specializing in tramp art. “It’s felt ‘pure folk art’ was made by indigenous people; and having hobo wanderers making (tramp art) fit their definition at the time. Basically, a woman wrote an article for a magazine in 1959 after finding some in a Pennsylvania barn, and the owner thought it came from someone who passed through.

“Most tramp art was made in a home setting, but being a democratic craft, it was made by all types of people from every background.” 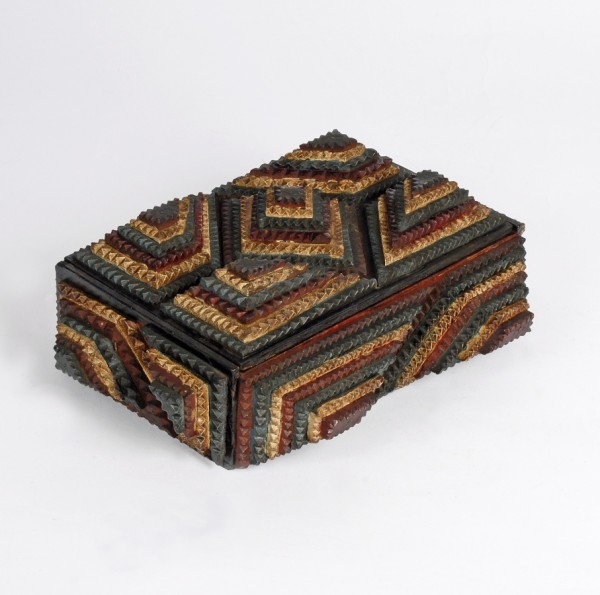 Four-color painted tramp art box with the inscription, ‘Grandma’s Box’ written in pencil inside the box, made out of ‘Real Thing’ cigar boxes and showing the wonderful lithographed label, the has a MN tax stamp, circa 1900, 10 in. x 3 ½ in. x 7 ½ in. Sale price $975 at TrampArt.com.

While tramp art may not have its roots solidly in the world of itinerants, Wallach and his wife and business partner, Nancy, have found evidence that indicates that it is an art form created from everyday objects by ordinary people. Using pocket knives and similar tools, they used a technique known as chip carving to create layers of geometric patterns on discarded wood and sometimes corrugated cardboard. Discarded cigar boxes were perfect for such carving. The Wallachs explain the process on their website, www.trampart.com. 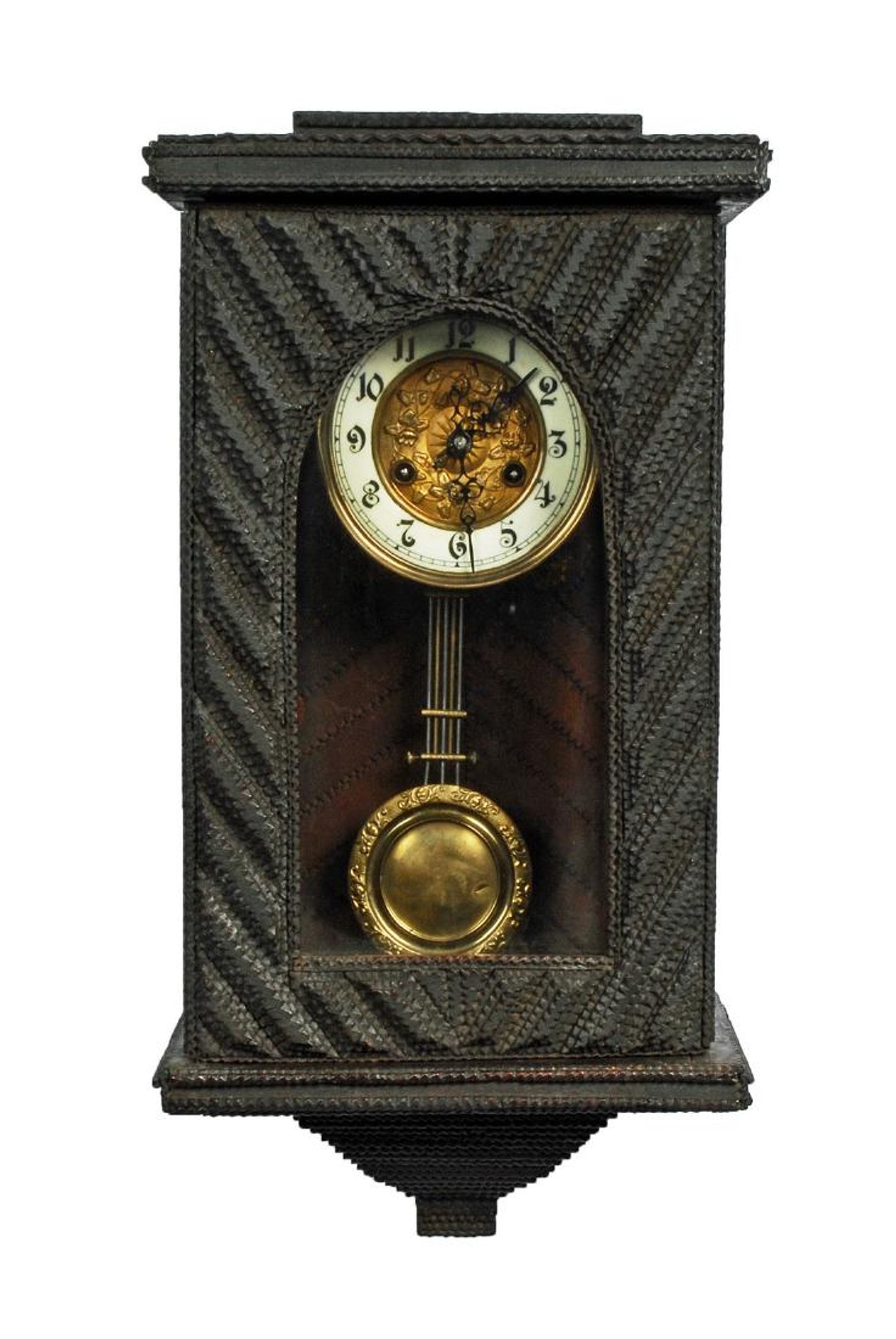 Helpful Analogy: “Constructing tramp art was similar to how a bricklayer or mason would assemble a wall – making a whole out of many pieces by stacking and layering. Elements were added using a process not unlike the appliqué technique of a quilt maker,” Wallach explains in A Legacy in Tramp Art, his third book on the subject.

Research shows the boom for tramp art began in the third quarter of the 19th century and lasted through the second quarter of the 20th century. There is debate about where the art form originated, with some reports pointing to Europe and others citing its development in the United States. Through their research, the Wallachs and others found examples of the art form appeared around the same time in both places. 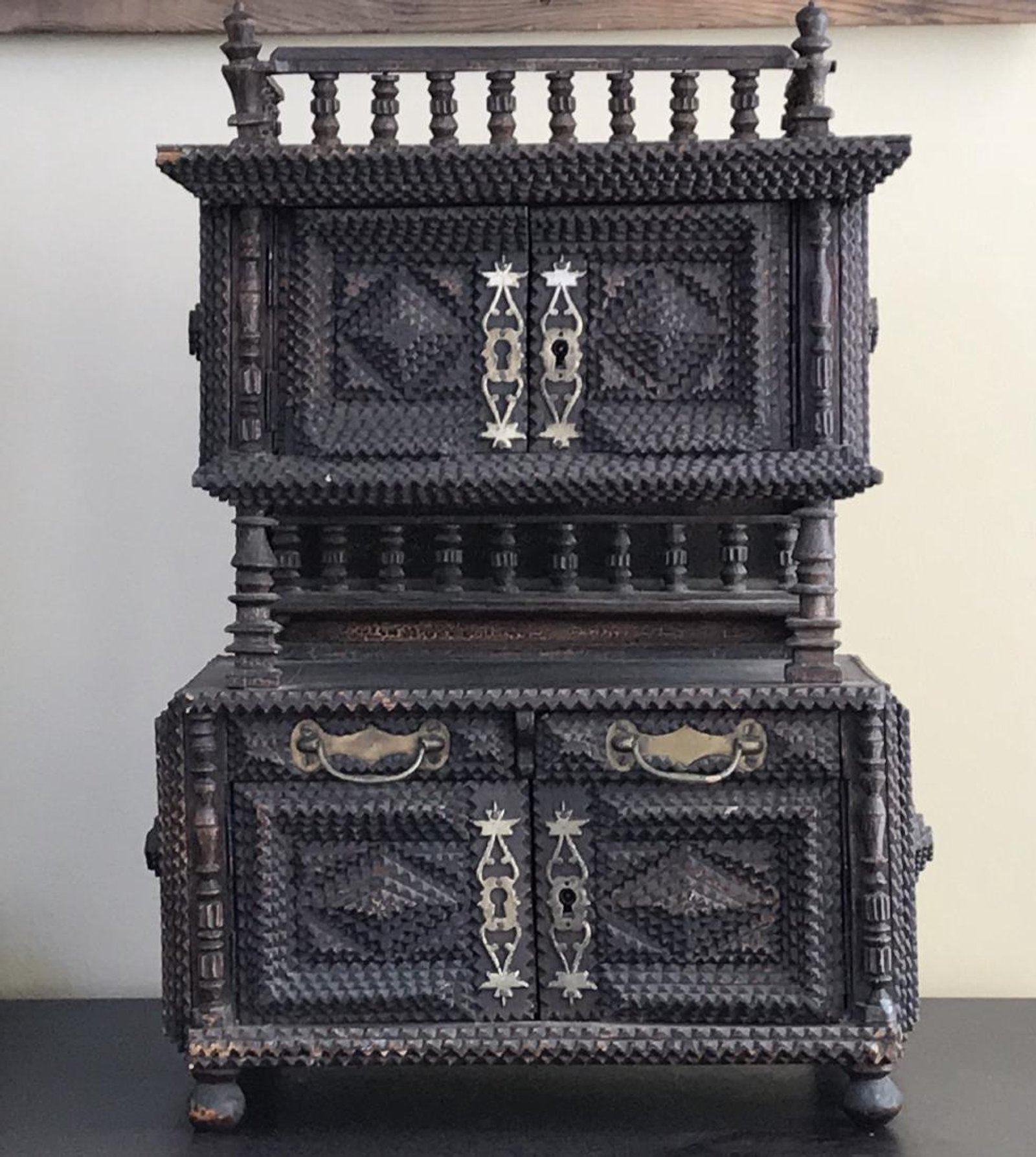 “Tramp art was made worldwide where ever cigar boxes were sold,” Wallach said. “Mostly, they were found where there were concentrations of working men – like by factories, cities, etc.”

However, men were not the only ones creating tramp art, as the Wallachs discovered through their research. Reports reveal examples and supporting evidence of women, and even children, creating tramp art, and by people of various ethnic backgrounds. This discovery was significant given the identities of those responsible for tramp art pieces are unknown. Without formal training they pioneered an art form in their homes from found objects and materials that others saw as no longer having any value or purpose. This reason alone makes tramp art a prime example of outsider art. 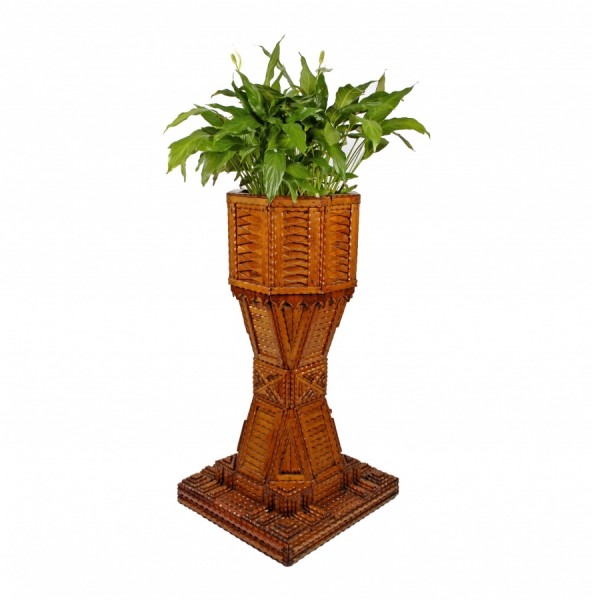 Just like most art forms, the shape and design of tramp art were driven by the imagination of the artists, and the availability of materials. However, there are a couple of items of tramp art that are most common: boxes and frames. 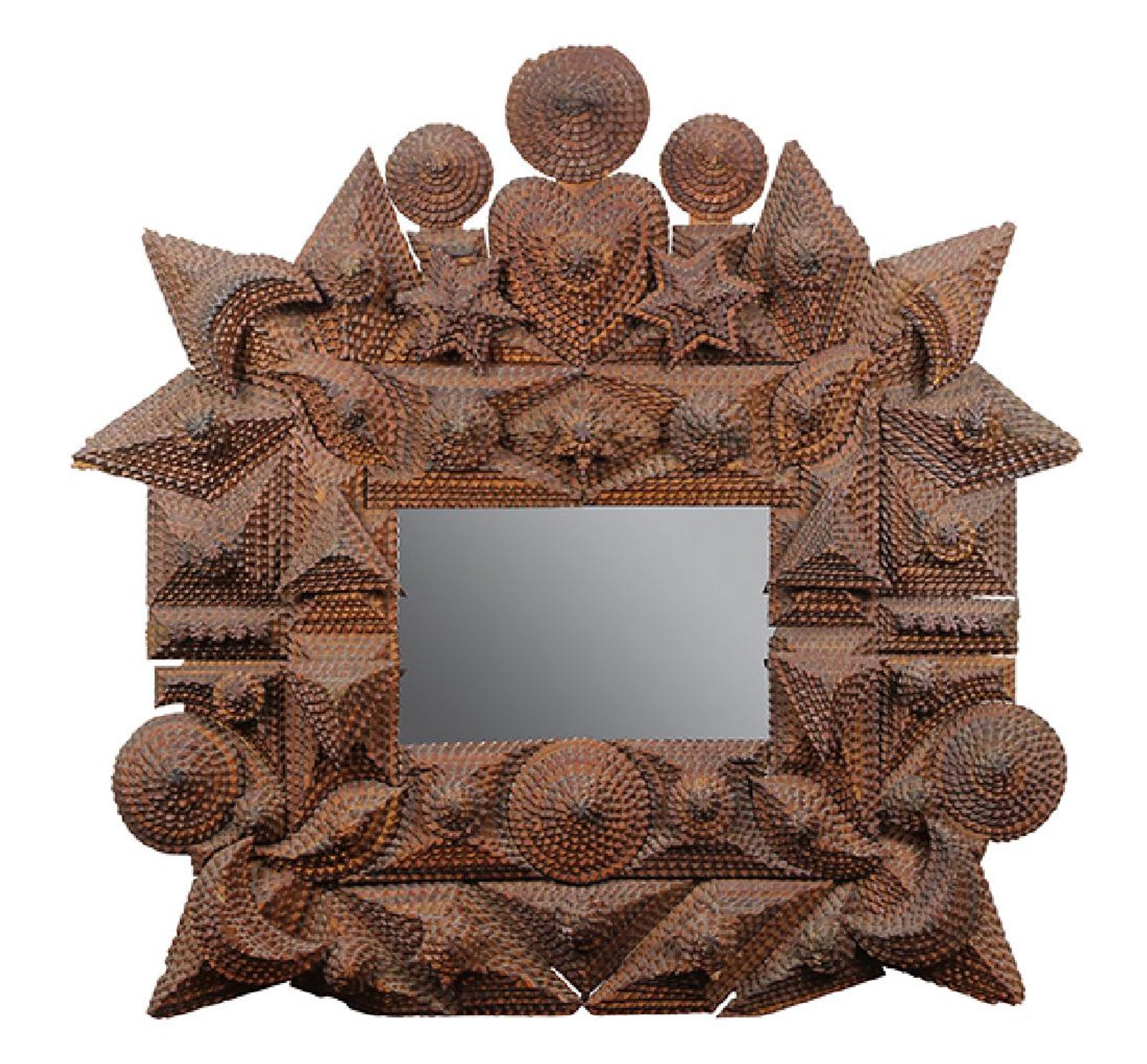 “Many were made to celebrate an occasion, but most were made by men for women,” Wallach said. “Sewing boxes, jewelry boxes, frames to hold family or sweetheart photos. The most common decorative element besides the basic pyramid was the heart – what a great story for Valentine’s Day.” 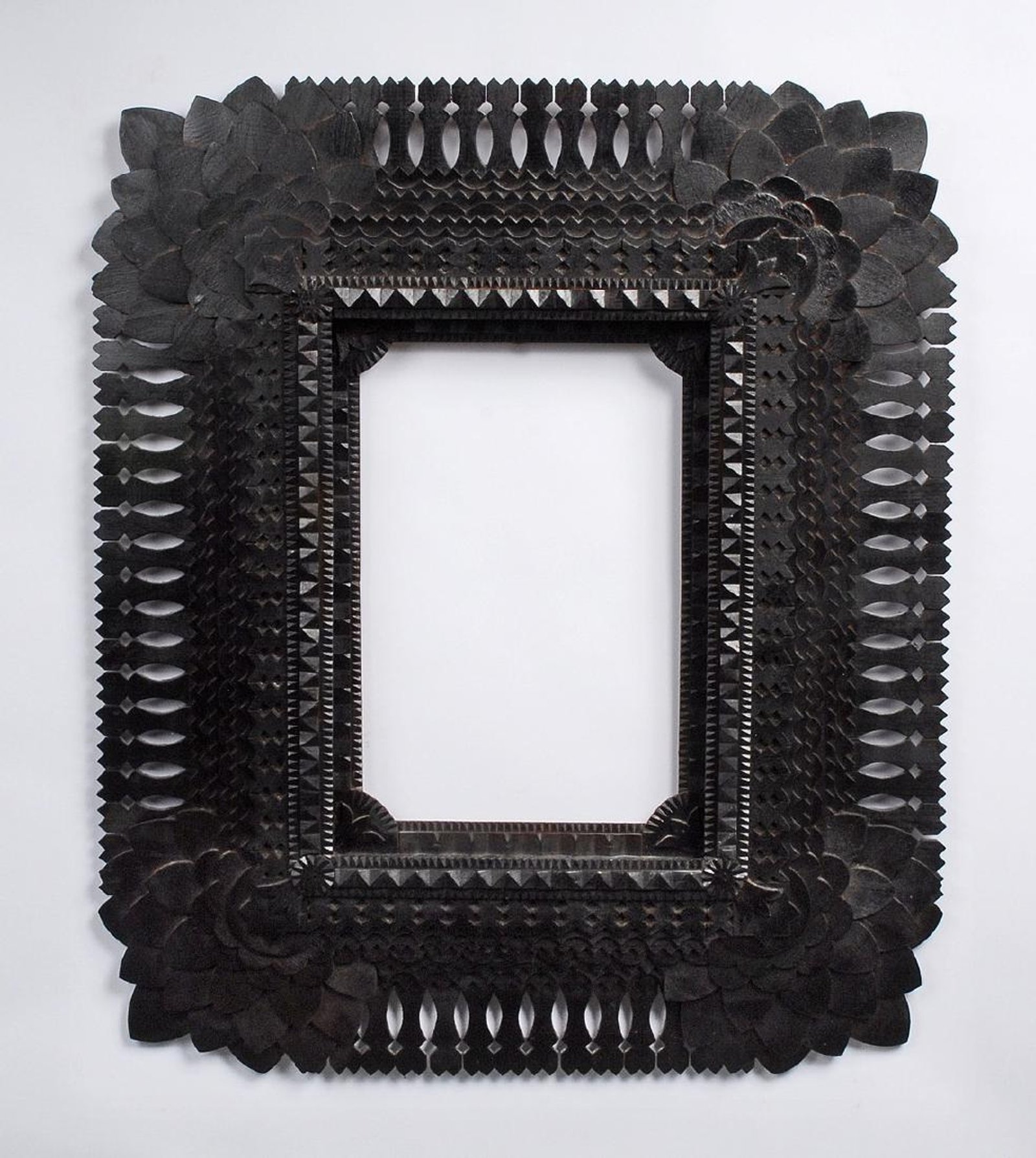 Opportunity to View Tramp Art: Now through September 16, 2018, the Museum of International Folk Art is presenting the exhibition “No Idle Hands: The Myths & Meanings of Tramp Art.” The Museum is in Santa Fe, New Mexico, www.internationalfolkart.org

To learn more, look for these books by Clifford A. Wallach: A Legacy in Tramp Art, Tramp Art: Another Notch, Folk Art from the Heart, and Tramp Art, One Notch at a Time, written with Michael Cornish. http://www.trampart.com/books/