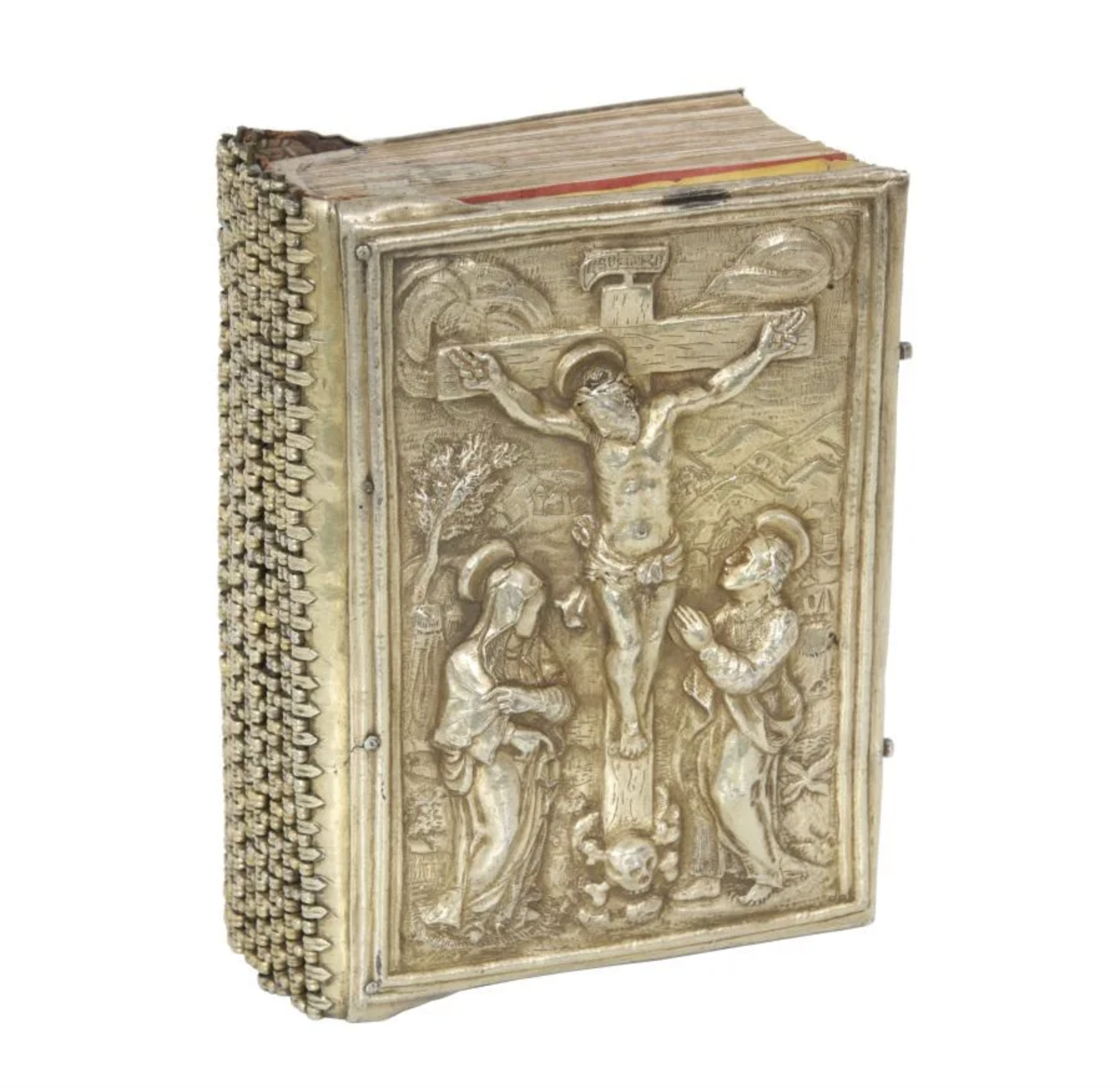 An Armenian Bible with a silver repousse cover and silver mesh spine sold for $40,000 plus the buyer’s premium in January 2020. Image courtesy of Fontaine’s Auction Gallery and LiveAuctioneers.

Your family Bible might be generations old and deeply beloved. Unfortunately, that doesn’t necessarily mean its priceless nature will translate into actual dollars. Bibles that garner healthy sums at auction are always exceptional in some way, be it obvious or obscure. Here are some examples of Bibles that did well, and why. 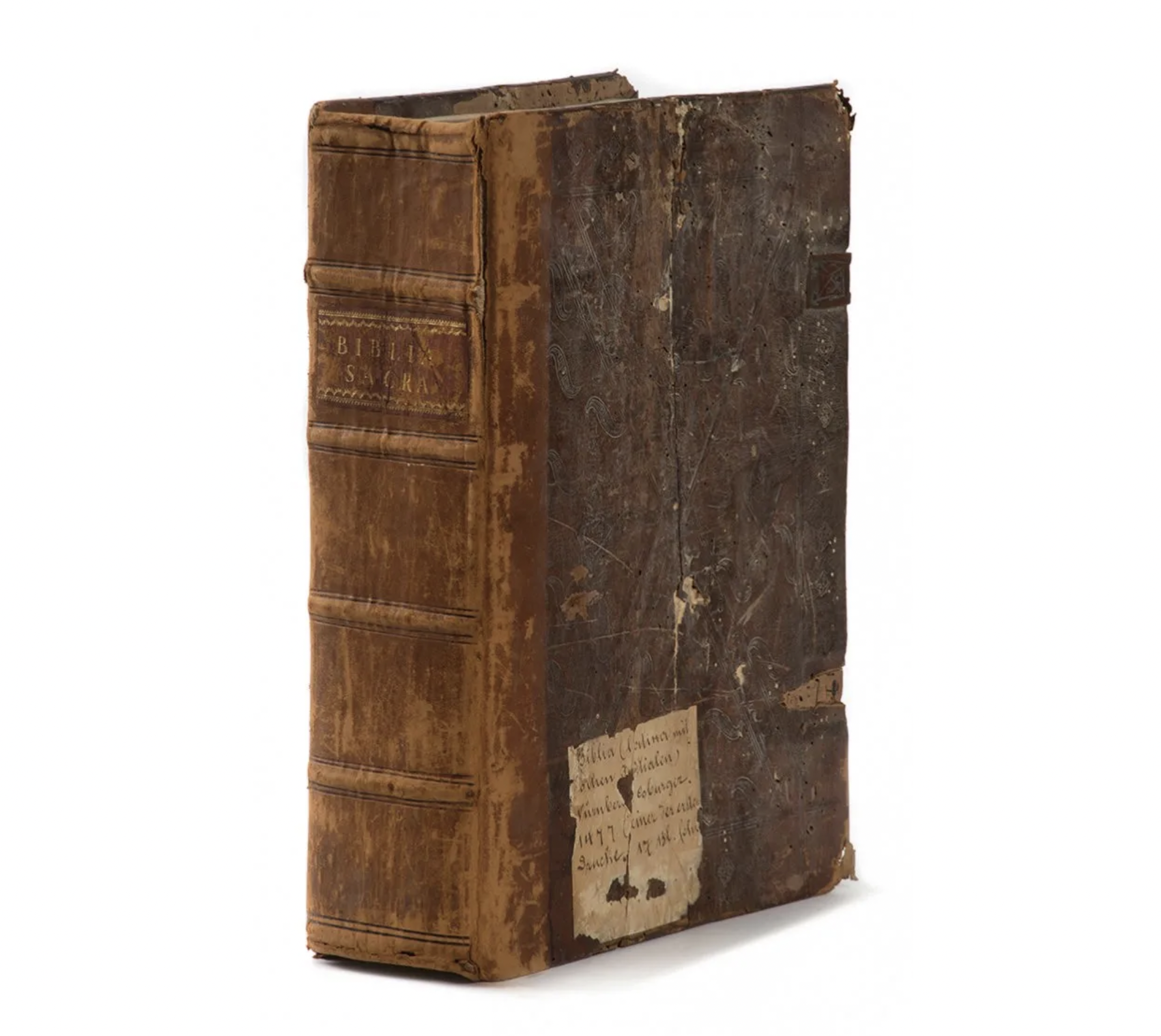 A Latin Bible printed in 1477 in Nuremberg, Germany realized $5,500 plus the buyer’s premium in March 2016. Image courtesy of Kedem Auctions and LiveAuctioneers.

Is it really old?

When the printing press arrived, the Bible was among the earliest works created with the revelatory machine. Bibles that qualify as incunabula — those that predate the year 1501 — can realize strong prices, such as a copy published in Latin in Nuremberg, Germany in 1477. It lacked 18 of its pages and suffered other flaws as well, but nevertheless, it sold for $5,500 plus the buyer’s premium at Kedem Auctions in Jerusalem in March 2016. 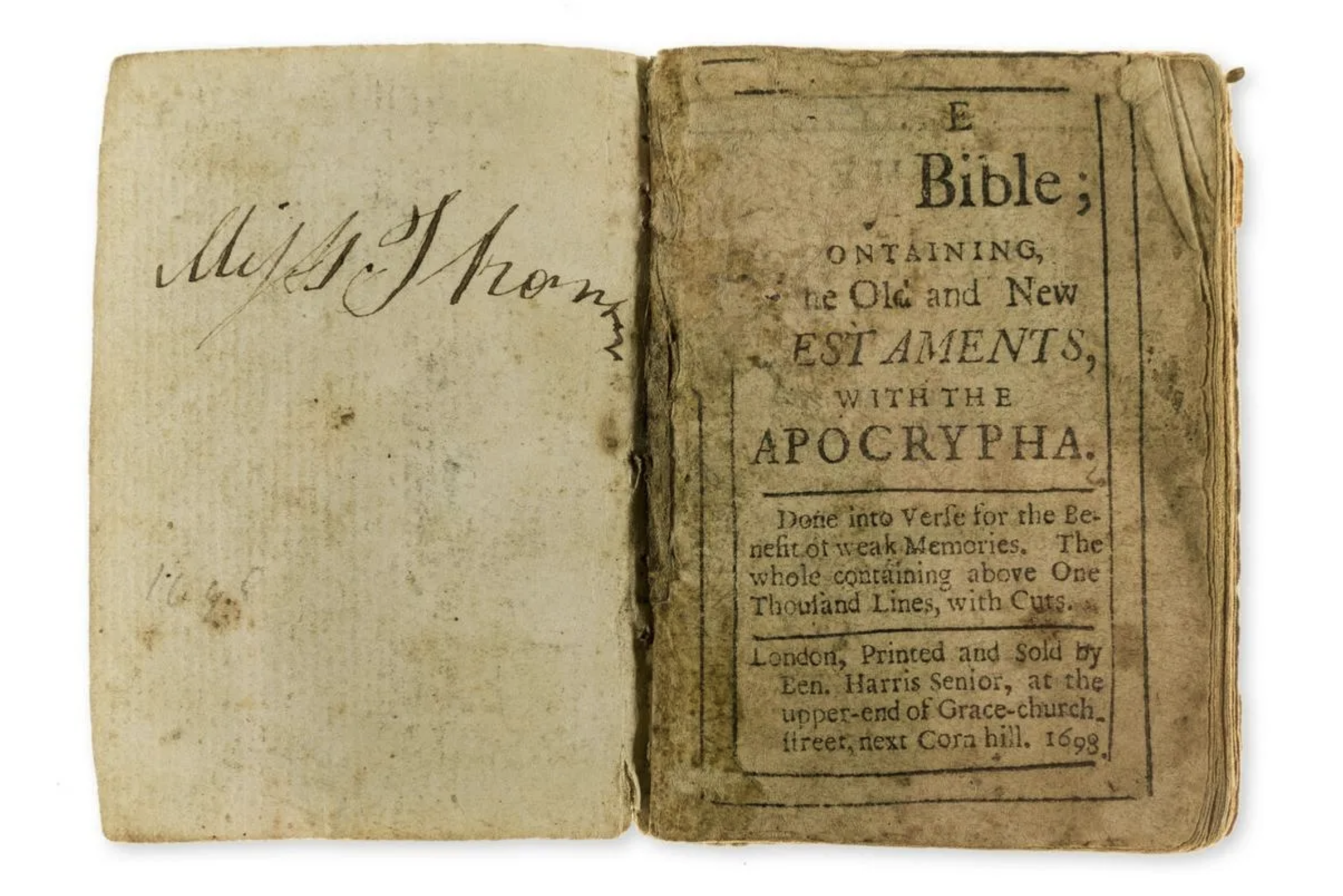 A late 17th-century miniature Bible, measuring roughly three inches by two inches, sold in January 2021 for £12,000 (about $16,000) plus the buyer’s premium. Image courtesy of Forum Auctions and LiveAuctioneers.

Is it really small?

Miniature books have been around almost as long as the printing press. A tiny tome offered at Forum Auctions in London in January 2021 was especially curious. It offered the Bible ‘Done into verse for the Benefit of weak Memories, The whole containing above One Thousand Lines, with Cuts.’ Its creator also found room for a woodcut or two to enliven the judiciously shortened text. Seemingly dating to the early 18th century, the book measured almost three inches by two inches, and it appears to be the only one of its type. It sold for £12,000, or about $16,000, plus the buyer’s premium, a sum that doubled its high estimate. 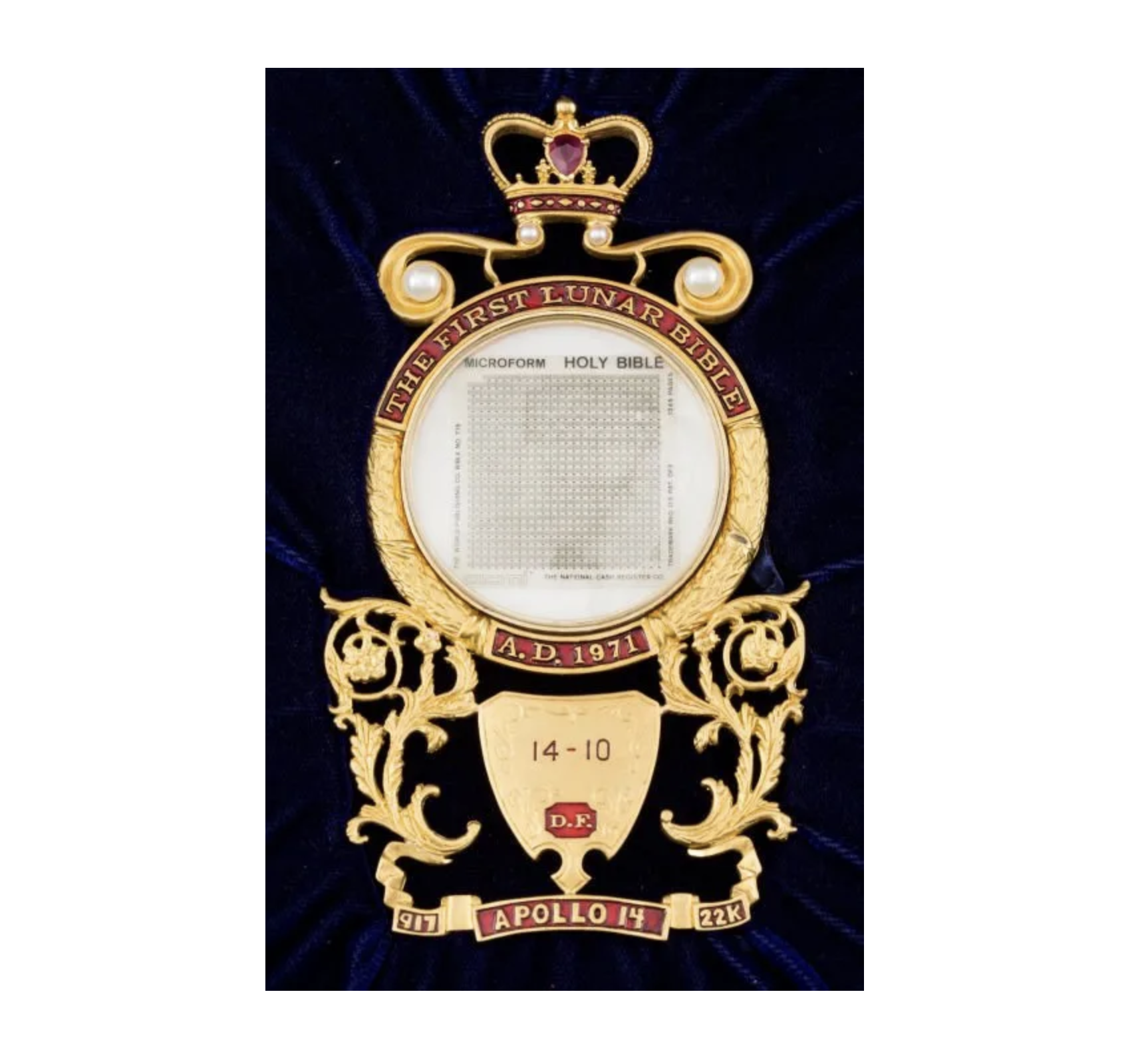 A Lunar Bible that flew to the moon twice, on Apollo 13 and again on Apollo 14, achieved $60,000 plus the buyer’s premium in May 2014. Image courtesy of Heritage Auctions and LiveAuctioneers.

Did it fly in space?

When NASA planned the Apollo missions, it took care to provide for the astronauts’ needs, including their spiritual needs. It allowed those who wished to do so to place a Bible in their personal preference kit (PKK), a small bag in which they could stash items they wanted to carry into space. Because a full-size Bible would have been too heavy to make the cut, a special edition was made that measured 1.5 by 1.5 inches. It was dubbed the Lunar Bible.

In May 2014, Heritage Auctions in Dallas offered a Lunar Bible that had flown to the moon twice – first on the Apollo 13 mission, and again on Apollo 14, in the PPK of astronaut Edgar Mitchell. At some point after its return to Earth, it was ensconced in a handmade solid gold reliquary. It realized $60,000 plus the buyer’s premium. 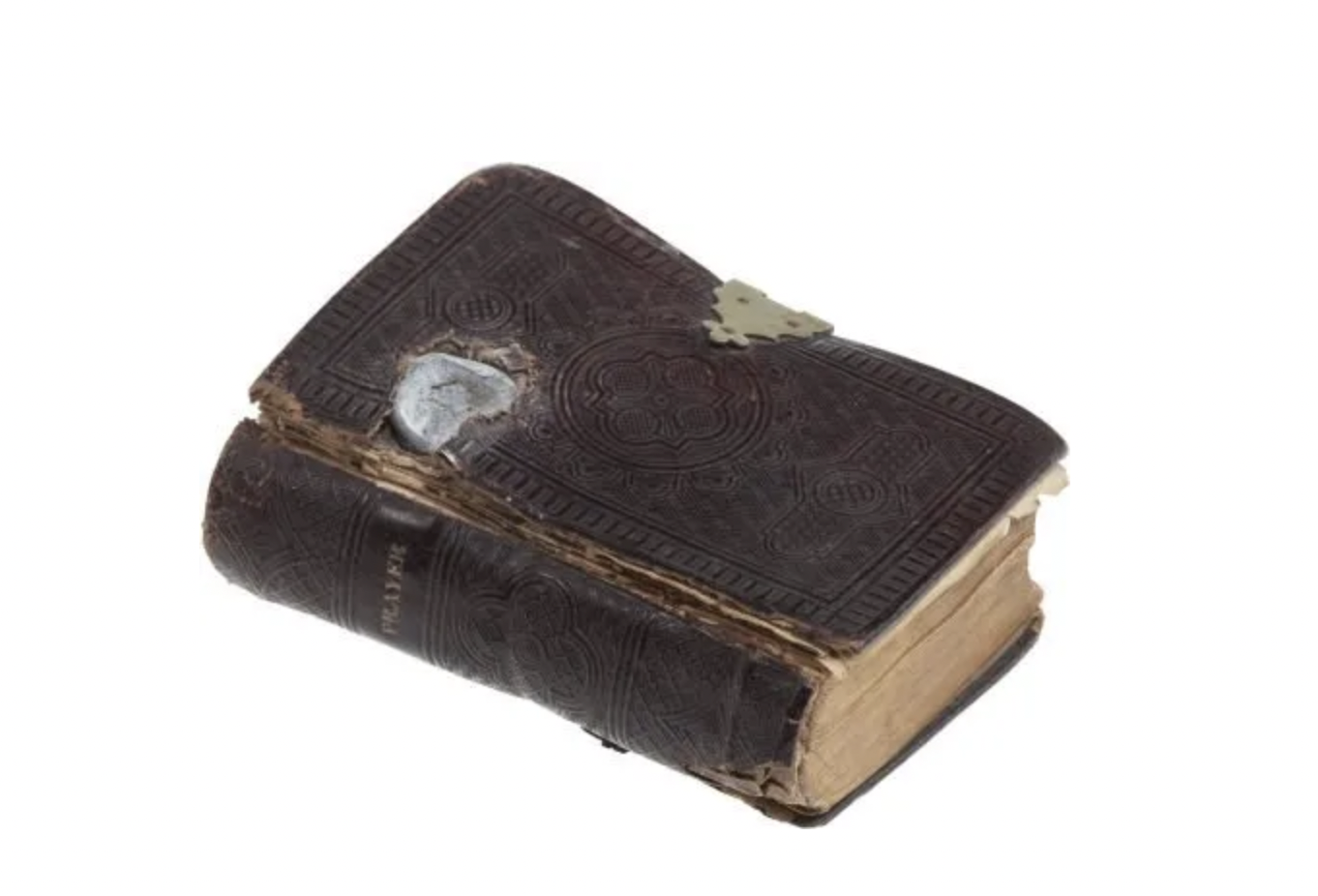 A pocket Bible that saved the life of Union private Edwin C. Hall during the Battle of Sailor’s Creek in April 1865, and still has a bullet lodged in it, sold for $13,000 plus the buyer’s premium in March 2012. Image courtesy of Heritage Auctions and LiveAuctioneers.

Did it save a life?

You’ve probably heard stories of people who cheated death when the Bible in their pocket stopped a bullet. While many of those tales are apocryphal, at least one is not. Union soldier Edwin C. Hall was hit by a so-called “minnie ball” at the Battle of Sailor’s Creek in April 1865 and lived thanks to the Book of Common Prayer he had stashed on his person. We know it was a Confederate minnie ball (properly known as a Minie ball, after Claude Etienne Minie, designer of the rifle that fires it) that hit Hall because it’s still lodged firmly within the book. The Civil War veteran expressed his gratitude in an 1898 letter that includes the lines, “This prayer-book saved my life by stopping a musket ball at Sailor’s Creek. I hope you may use it in your museum. I have always put my trust in the Lord, and he has done work always come through for me … Edwin Hall late 5th Vermont Inf.” Heritage offered both the Bible and the letter as a single lot in December 2012. It sold for $13,000 plus the buyer’s premium. 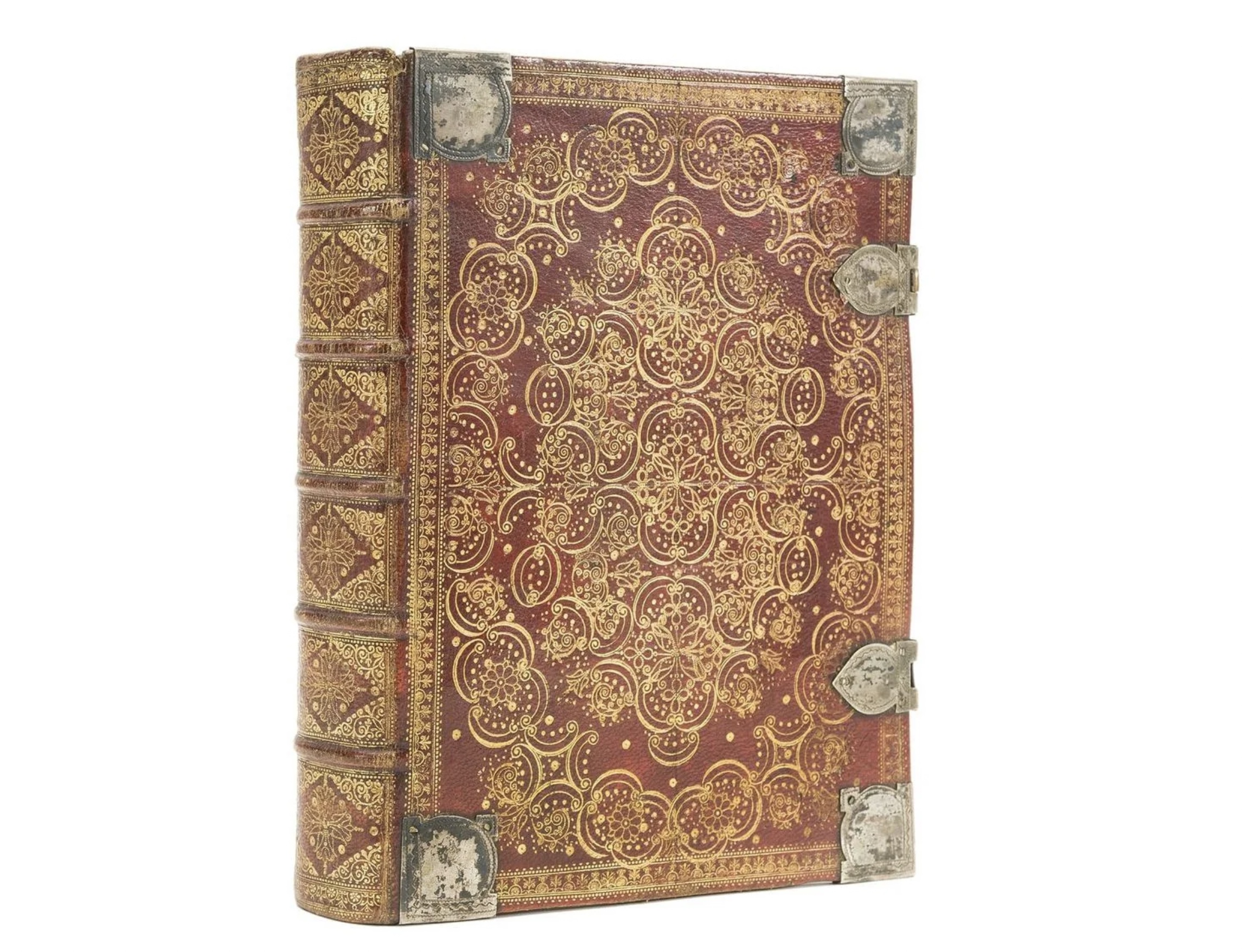 A late 17th-century Bible featuring a later binding of red morocco tooled with gilt and fitted with silver clasps and corner-pieces realized £6,000 (about $8,000) plus the buyer’s premium in June 2020. Image courtesy of Forum Auctions and LiveAuctioneers.

Is its binding pretty? Really pretty?

The New Testament of the Bible focuses on the life of Jesus Christ, whose followers believe he is the son of God. He counseled modesty and humility, and took a dim view of the excesses of the rich. But his clear and unambiguous statements on the subject didn’t stop wealthy Christians from commissioning luxurious Bibles from bookbinders. Still, it’s hard to scorn artisans who summon their considerable talents to express their piety in the form of a breathtakingly beautiful object.

Two among countless examples along these lines is an undated Armenian Bible with a silver repousse cover showing a scene of Christ on the cross, flanked by the Virgin Mary and Joseph. Its spine is silver mesh, and its back features a Nativity scene. It realized $40,000 plus the buyer’s premium against an estimate of $3,000-$5,000 at a Fontaine’s Auction Gallery sale in Pittsfield, Massachusetts in January 2020. Also of note is a late 17th-century Bible plus a Book of Psalms with a jaw-dropping later binding elaborately tooled in gilt and fitted with silver clasps and corner-pieces. Offered in June 2020 at Forum Auctions in London, it achieved £6,000, or roughly $8,000, plus the buyer’s premium. 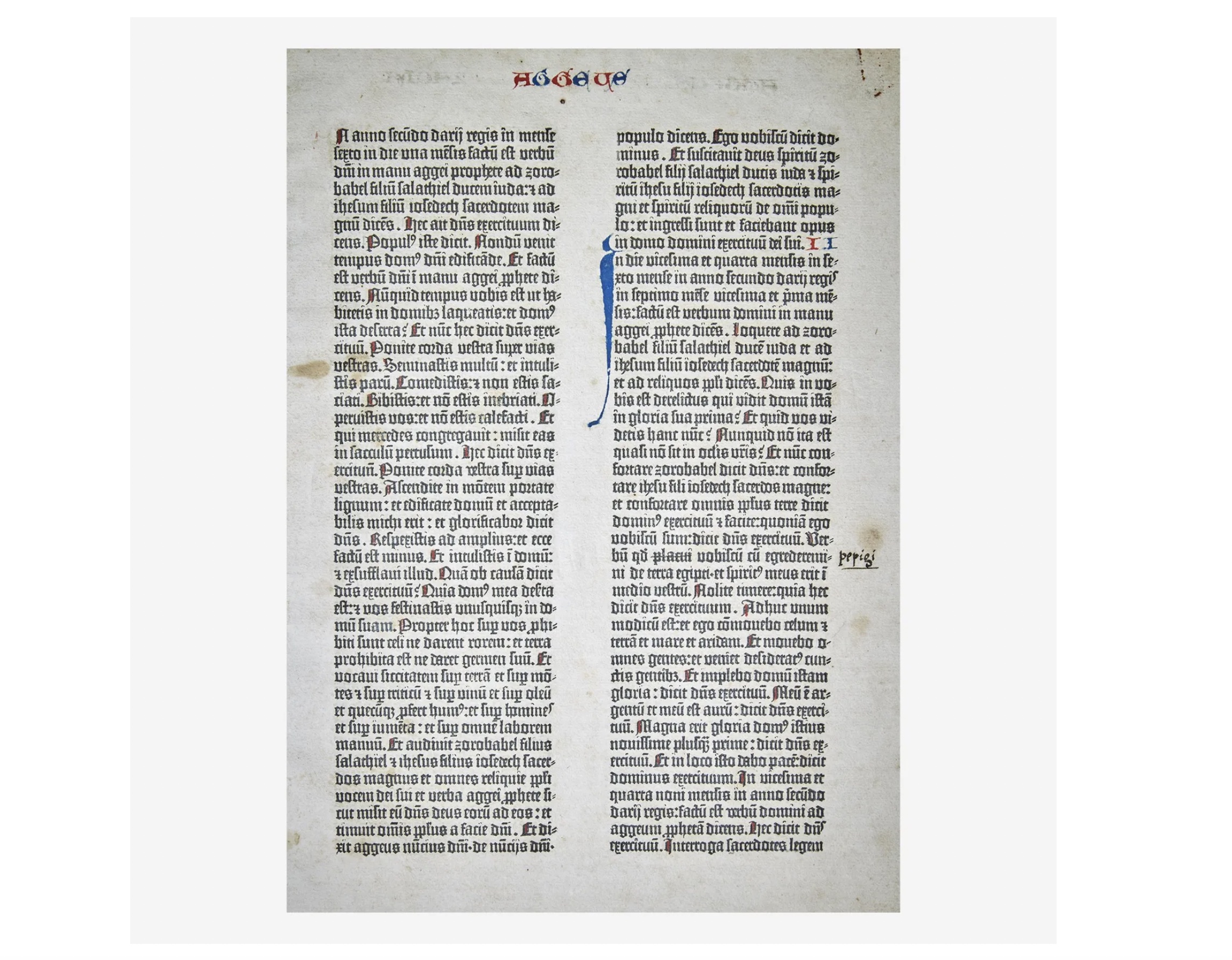 A single leaf, or page, from the New Testament of the Bible printed in the mid-15th century by Johannes Gutenberg achieved $65,000 plus the buyer’s premium in September 2020. Image courtesy of Freeman’s and LiveAuctioneers.

Did Gutenberg print it?

As noted above, incunabula — books produced during the infancy of the printing press — have inherent value. It should come as no surprise that the first of firsts, the Bible printed by Johannes Gutenberg himself, is forever in demand. Single pages from his exceptionally early edition sell for more than exquisite and complete Bibles printed decades or centuries later. Freeman’s, the Philadelphia-based auction house, proved the point in September 2020 when it presented a single leaf, or page, from the second volume of the New Testament printed by Gutenberg in the mid-15th century. It achieved $65,000 plus the buyer’s premium. 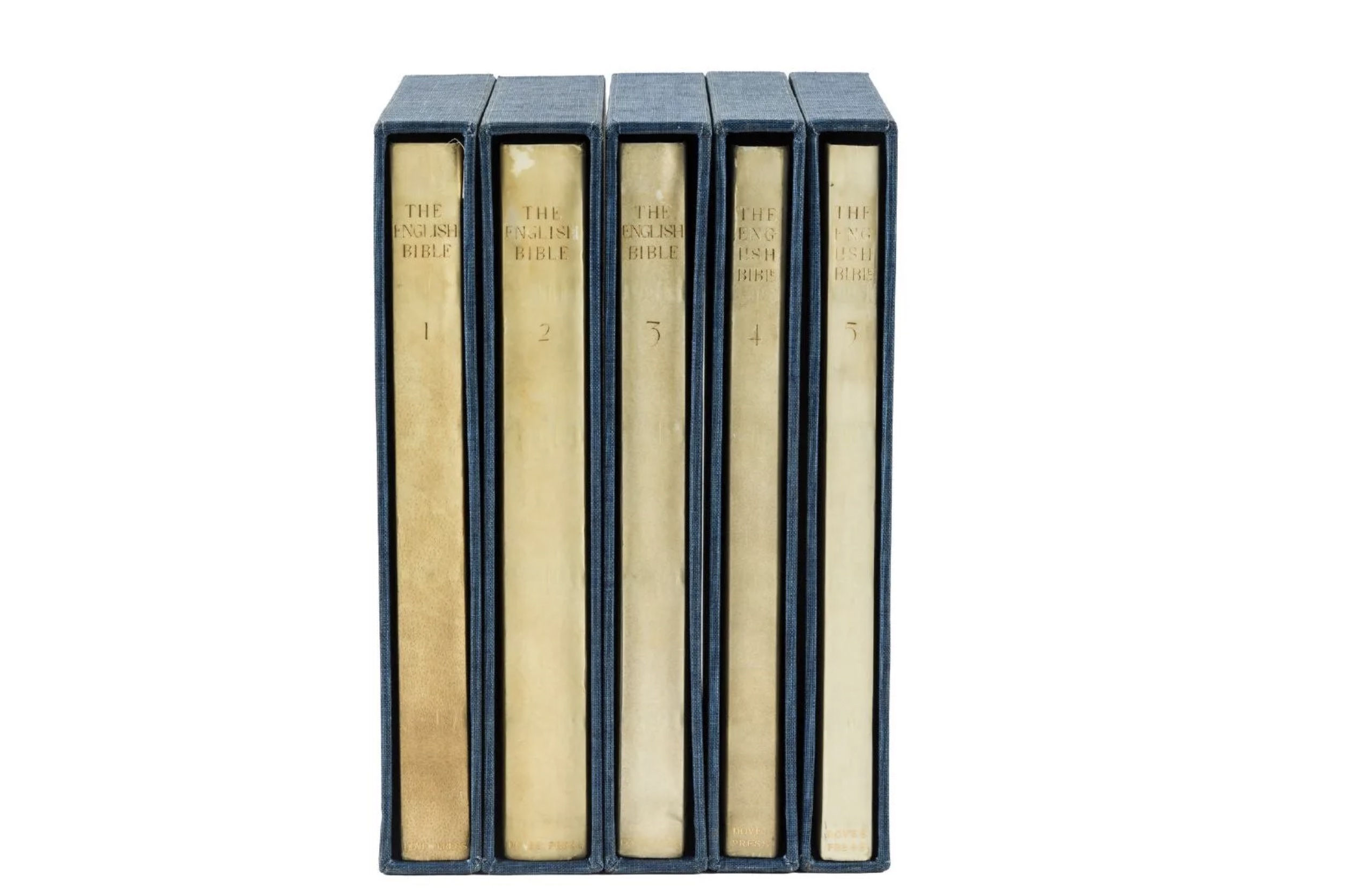 The English Bible, a five-volume version published in the early 20th century in an edition of 500 by the legendary Doves Press, sold for $14,000 plus the buyer’s premium in September 2017. Image courtesy of PBA Galleries and LiveAuctioneers.

Did a beloved small press print it?

Elite bookbinders raised the profession to an art form. It became common and almost routine for ambitious artistic small presses to cement their reputations by following Gutenberg’s lead and publishing their own renditions of the Christian holy book. Few small presses have earned the renown accorded to the Doves Press, which lasted fewer than two decades but truly died in March 1913 when co-founder T.J. Cobden-Sanderson pitched the first bundle of matrices of the press’s distinctive Doves Type font into the Thames River. The Doves Press five-volume English Bible, released between 1903 and 1905 in an edition of 500, is widely regarded as its finest work. PBA Galleries of Berkeley, California, offered a set in September 2017 with an estimate of $7,000-$10,000. It rose to $14,000 plus the buyer’s premium. 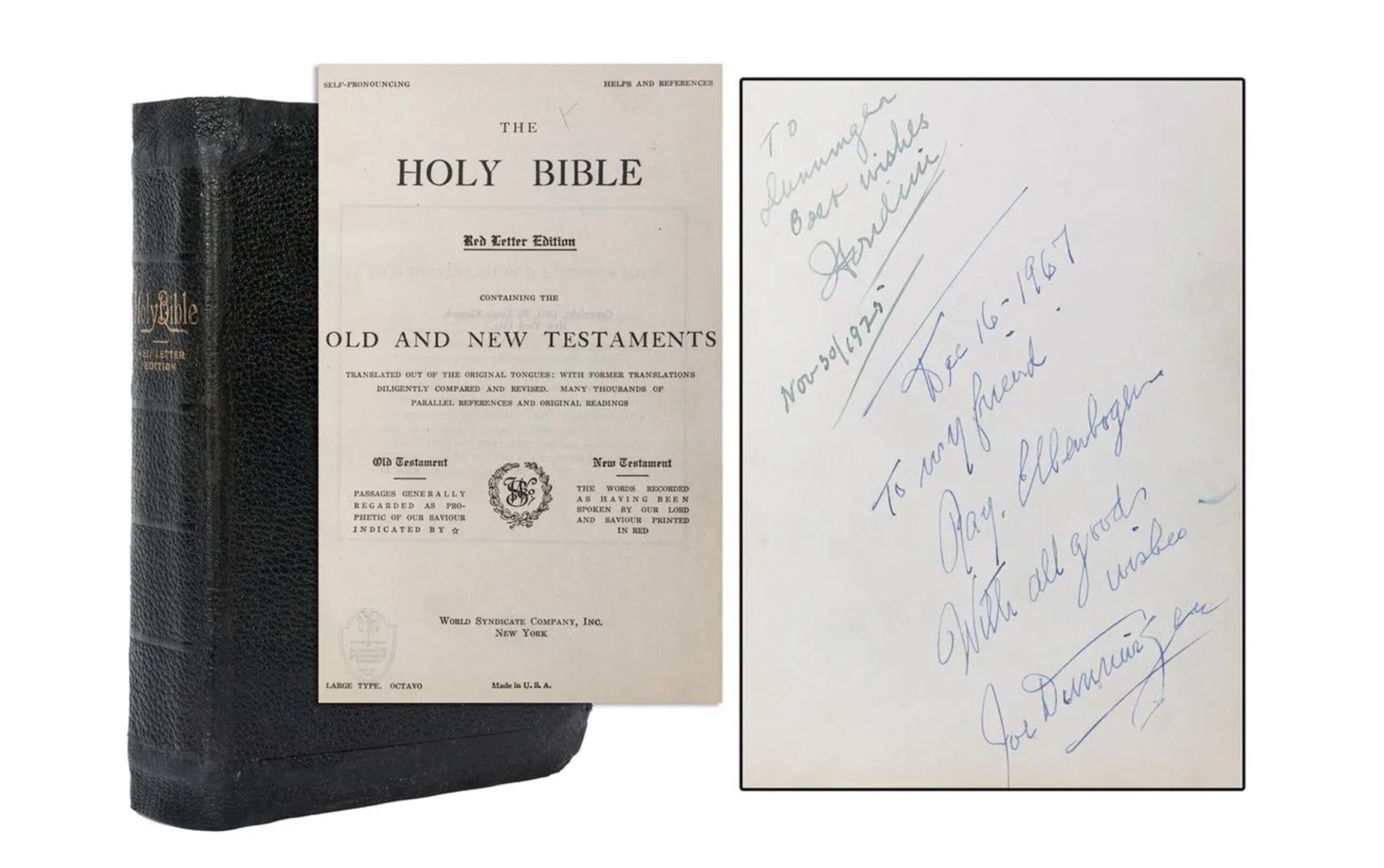 A Bible published in 1901 and signed and inscribed by magician Harry Houdini, who also had it gimmicked for use in mind-reading tricks, achieved $85,000 plus the buyer’s premium in December 2021. Image courtesy of Potter & Potter Auctions and LiveAuctioneers

Did a famous person own it?

Provenance matters in the realm of collectible Bibles. In December 2021, Potter & Potter Auctions in Chicago featured a 1901 American Red Letter Edition printing that had belonged to Harry Houdini and bore an inscription from him to Joseph Dunninger, a magician who performed as a mentalist, or mind-reader. The book was one of four Bibles traceable to Houdini, and the only one with his signature. It might seem curious for him to have owned a Bible in light of the fact that he was Jewish, and the son of a rabbi. But it is clear that Houdini used it as a magic prop. The lot notes explain it was “prepared in a manner so as to allow the magician to read the mind of a spectator; when the volunteer flipped to any page in the bible, the mind reader could instantly determine which chapter and verse the reader was gazing upon with unfailing accuracy.” Its dual purpose as a working book and a holy book definitely made it more interesting, but its Houdini connection trumped all. Estimated at $15,000-$25,000, it achieved $85,000 plus the buyer’s premium.