Numismatics, or coin collecting, has its own lexicon, which can be bewildering to anyone new to the hobby. Popular nicknames of U.S. coins, such as wheat penny, buffalo nickel (it’s actually a bison) or Mercury dime (which neither depicts the Roman god nor has any mercury content), are also confusing. Use the following glossary to learn the basic lingo used by collectors of U.S. coins and soon you, too, will sound like an expert.

Bag marks: Surface abrasions found on coins as a result of coins striking the surfaces of other coins during bagging and shipping.

Buffalo nickel: Nickname given to the Indian head 5-cent coin issued from 1913 to 1938. The nickname is incorrectly used, however, because U.S. coins are usually named after their obverse (front-side) design. The animal depicted on the reverse side of the coin is a bison, not a buffalo.

Coin: A piece of metal, marked with a device and issued by a government for use as money. 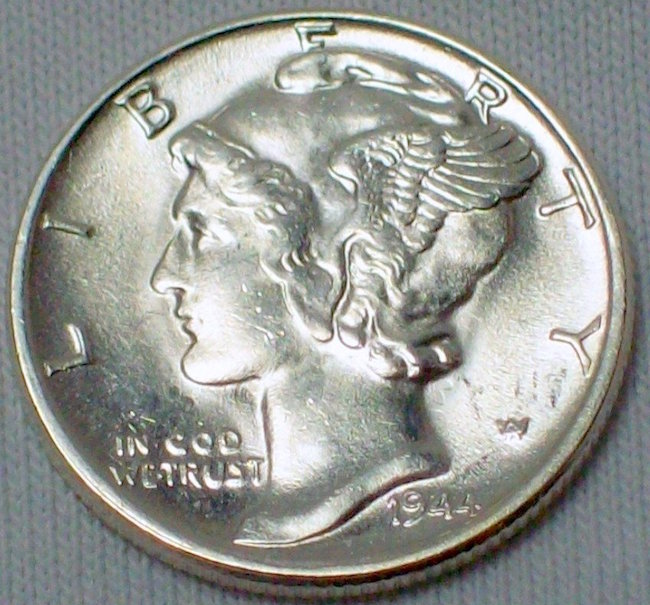 The Winged Liberty Head dime is nicknamed the Mercury dime because of its resemblance to the Roman god. It was designed by Adolph Weinman and engraved by Charles Barber. Image courtesy of LiveAuctioneers archive and The Chivalrous Collector Ltd.

Clad: Coin that has a core of base metal, such as copper, and surface layers of a more valuable metal, like copper-nickel. U.S. dimes, quarters and half dollars minted since 1965 are a clad coinage.

Denomination: The face value of a coin; the amount of money it is worth as legal tender.

Die: A metal punch, the face of which carries an intaglio or incuse mirror image to be impressed on one side of a planchet.

Double Eagle: A $20 gold coin of the United States.

Grading: Since the mid-20th century, the American Numismatic Association has used a 1-70 numbering scale, where 70 represents a perfect specimen and 1 represents a barely identifiable coin. Descriptions and numeric grades for coins (from highest to lowest) are as follows: 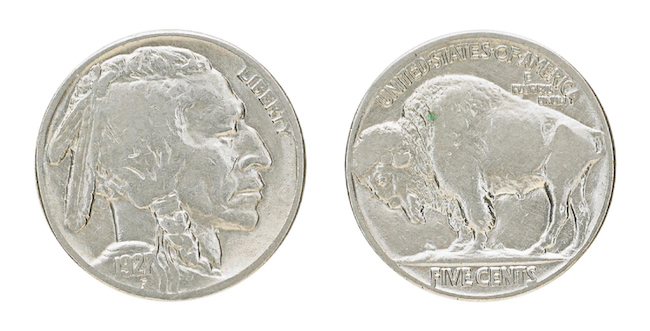 The Indian Head 5-cent coin is nicknamed the buffalo nickel. It was designed by James Earle Fraser and engraved by Charles Barber. Image courtesy of LiveAuctioneers archive and Rago Arts and Auction Center

Indian Head cent: U.S. cent designed and engraved by James A. Longacre and issued 1859 to 1909. Also called Wreath, or Wreath and Shield, for the designs on the reverse.

Legal tender: Currency (coins or paper money) explicitly determined by a government to be acceptable in the discharge of debts.

Mint mark: A letter or other symbol indicating the mint of origin. U.S. coinage began at the Philadelphia Mint in 1793. 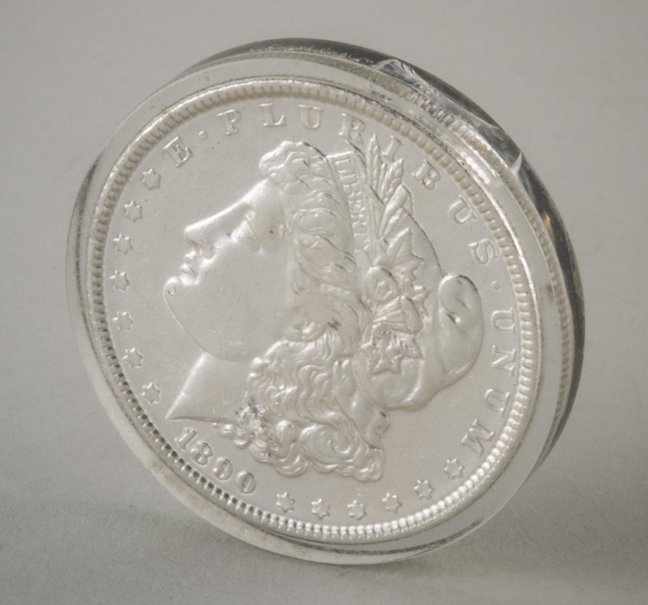 Obverse of the Morgan silver dollar, which depicts a profile portrait of Liberty. Image courtesy of LiveAuctioneers archive and Capo Auction

Morgan dollar: A U.S. silver dollar minted from 1878 to 1904, and again in 1921. The coin was named after its designer, George T. Morgan, U.S. Mint Assistant Engraver. The obverse depicts a profile portrait representing Liberty, while the reverse depicts an eagle with wings outstretched.

Nickel: The common – but factually incorrect – name for the U.S. 5-cent piece. In the 19th century copper-nickel cents and 3-cent coins were also nicknamed “nickel.”

Obverse: The side of a coin that bears the principal design, often as described by the issuing authority. In a coin toss, the obverse is known as “heads.” 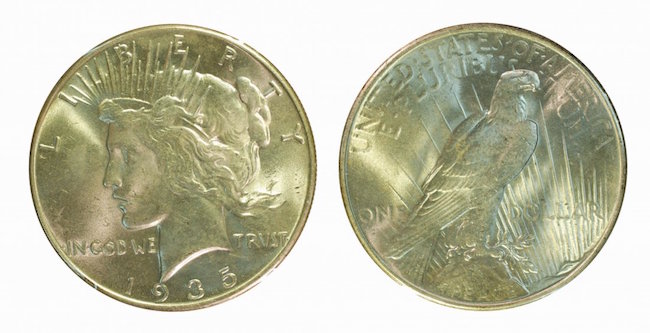 1935 was the last year the U.S. Mint issued the Peace dollar, which was composed of 90 percent silver. The coin was the result of a competition to find designs emblematic of peace. The reverse depicts an American bald eagle at rest clutching an olive branch, with the legend ‘Peace.’ Image courtesy of LiveAuctioneers archive and Lyn Knight Auctions

Peace dollar: A U.S. dollar coin minted from 1921 to 1928, and again in 1934 and 1935. Designed by Anthony de Francisci, the coin was the result of a competition to find designs emblematic of peace. Its obverse represents the head and neck of the Goddess of Liberty in profile, and the reverse depicts a bald eagle at rest clutching an olive branch, with the legend “Peace.” It was the last United States dollar coin to be struck for circulation in silver.

Planchet: A plain, round metal disk which, when placed between the dies and struck, becomes a coin; also called a flan or blank.

Proof coinage: Special early samples of a coin issue, historically made for checking the dies and for archival purposes, but nowadays often struck in greater numbers specially for coin collectors. Preparation of a proof striking usually involved polishing of the dies. They can usually be distinguished from normal circulation coins by their sharper rims and design, as well as much smoother “fields” – the blank areas are not part of the coin’s design.

Mint mark: On U.S. coinage, a letter or letters indicating the mint where the coin was produced. Mint marks in the United States coinage include P for the Philadelphia Mint, D for the Denver Mint, S for the San Francisco Mint, and W for the West Point Mint. In the past, CC for the Carson City Mint, C for the Charlotte Mint, D for the Dahlonega Mint, and O for the New Orleans Mint were used.

Reverse: The side opposite the obverse, usually the side with the denomination. In a coin toss, the reverse is known as “tails.”

Standing Liberty quarter: A U.S. 25-cent coin issued from 1916 to 1930. It features the goddess Liberty on one side and an eagle in flight on the reverse. The coin was designed by sculptor Hermon Atkins MacNeil.

Steel war penny: 1943 U.S. cents were struck in steel due to wartime shortages of copper. The Philadelphia, Denver and San Francisco mints each produced these 1943 Lincoln cents. The unique composition of the coin (low-grade steel coated with zinc, instead of the usual bronze composition) has led to various nicknames, such as wartime cent and steelie. The 1943 steel cent features the same Victor David Brenner design for the Lincoln cent, which had been in use since 1909.

Wheat penny: U.S. Lincoln cent issued from 1909 (the centennial of Abraham Lincoln’s birth) to 1958. Designed by Victor D. Brenner and engraved by Charles Barber, the coin takes its nickname for the “wheat ears” design on its reverse.

A Lineup of Famous Names in Jewelry
Scroll to top