NEW YORK – Marc Chagall (1887-1985), painter, designer and printmaker, was born to a devout Jewish family in Vitebsk, part of the Russian Empire. Throughout his life, he depicted its legends and lore. 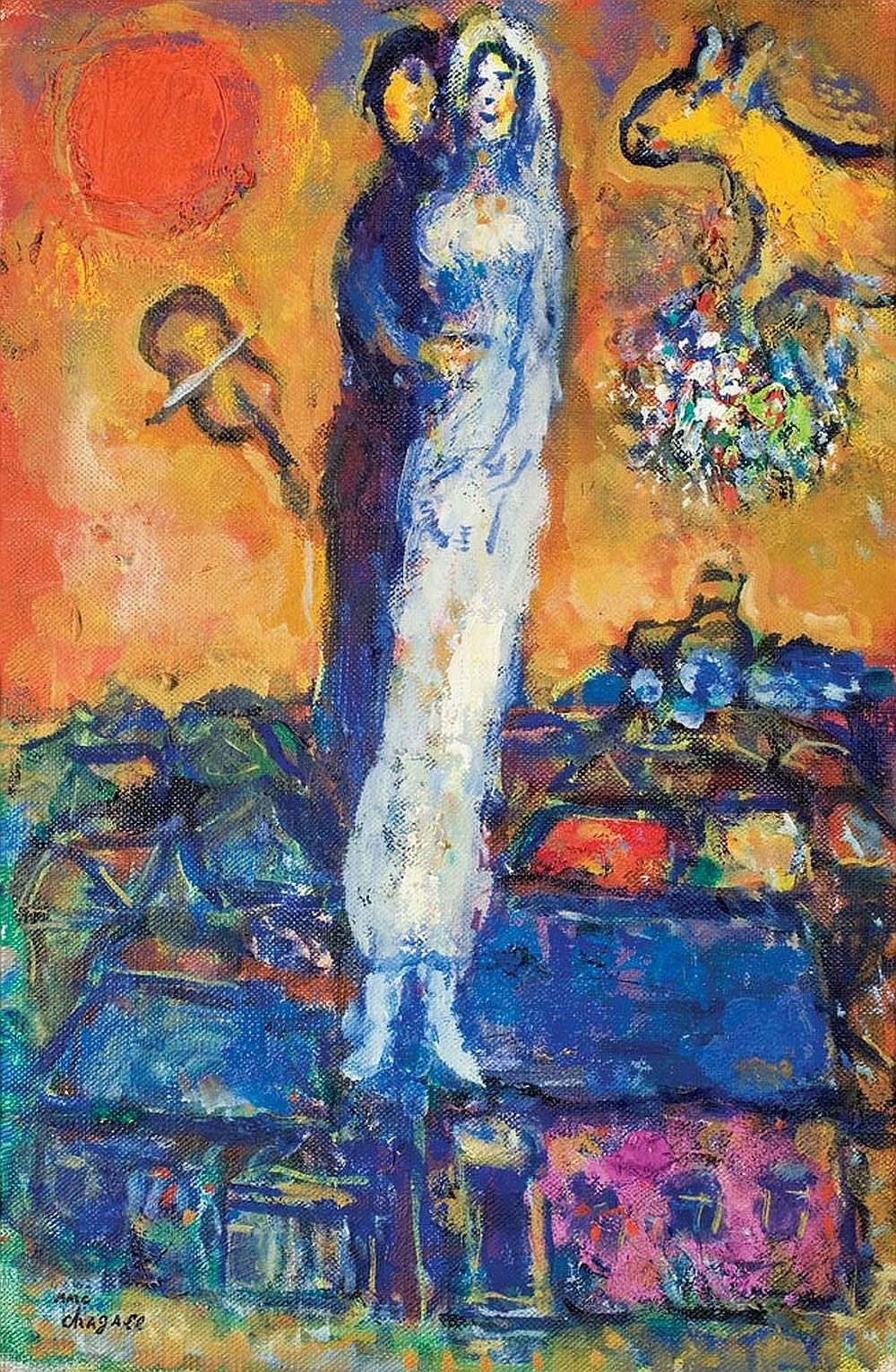 When World War I broke out, Chagall and his wife—just married in Vitebsk, were stranded in Russia. During these dark days, he created a delightful celebration of newlywed love, The Birthday. In it, the artist himself—swept off his feet with joy, bends over backwards to kiss his bride. During this period, Chagall also founded a Vitebsk art school, created stage designs for the State Jewish Chamber Theater and exhibited works in Moscow and St. Petersburg. Finally, in 1923, the couple resettled in Paris. 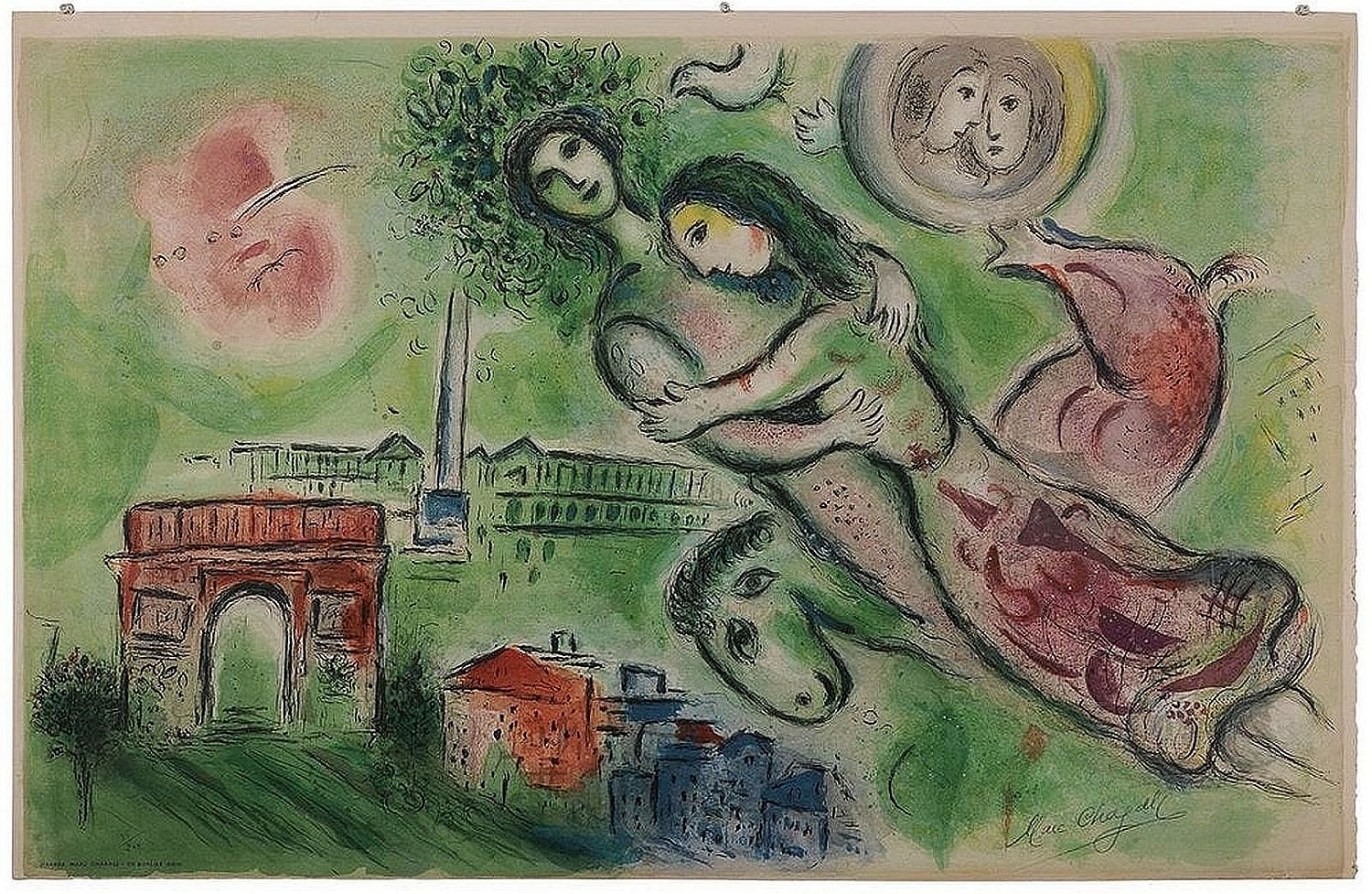 Though art forms continued to evolve, Chagall, true to his vision, continued to portray dreamlike images of curvy mermaids, tiny topsy-turvy villagers, flying cows, floating fiddles, blue donkeys, plump roosters and light-as-air lovers. He often adorned his etchings of Old Testament figures with folkloric and Hasidic elements as well. Moreover, scores of his colorful, complex Biblical scenes, like The Creation of Man (1958), The Binding of Isaac (1966), and Abraham and the Angels Going to Sodom (1956), depict glorious, winged beings guarding and guiding from above. 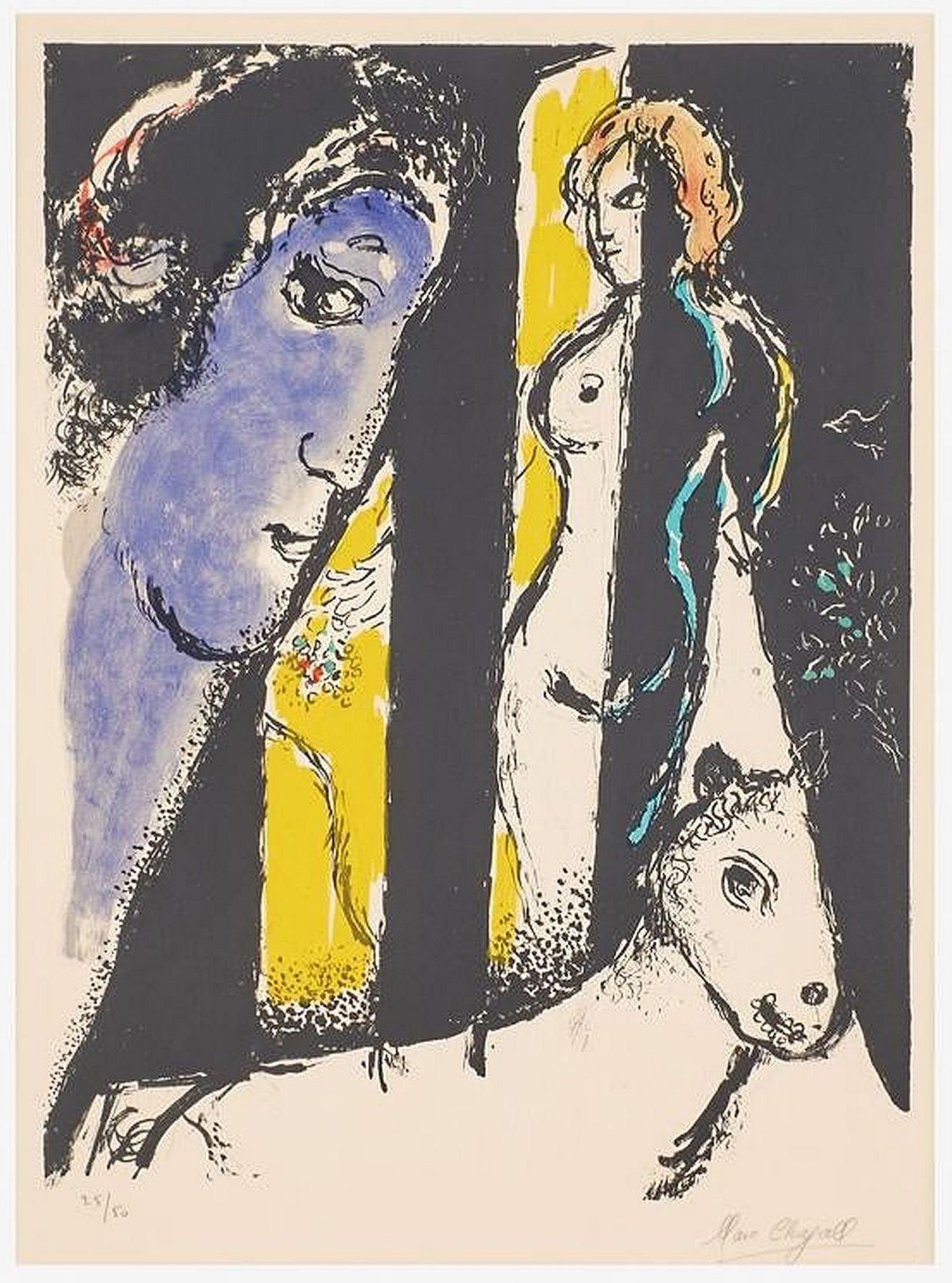 Although raised as a Jew, Chagall repeatedly depicted Christ on the Cross, especially during the Nazi Era when he fled France for the United States. According to Susan Tumarkin Goodman, senior curator emerita at the Jewish Museum, “For Chagall, the Crucifixion was a symbol for all the victims of persecution, a metaphor for the horrors of war and an appeal to conscience that equated the martyrdom of Jesus with the suffering of the Jewish people and the Holocaust.”

In addition to etchings and paintings, Chagall produced ceramics, sculptures, lithographs, tapestries and mosaics. He also created costumes and sets for the American Ballet Theater and designed magnificent murals for the Paris Opéra (1964) and the New York Metropolitan Opera (1966). 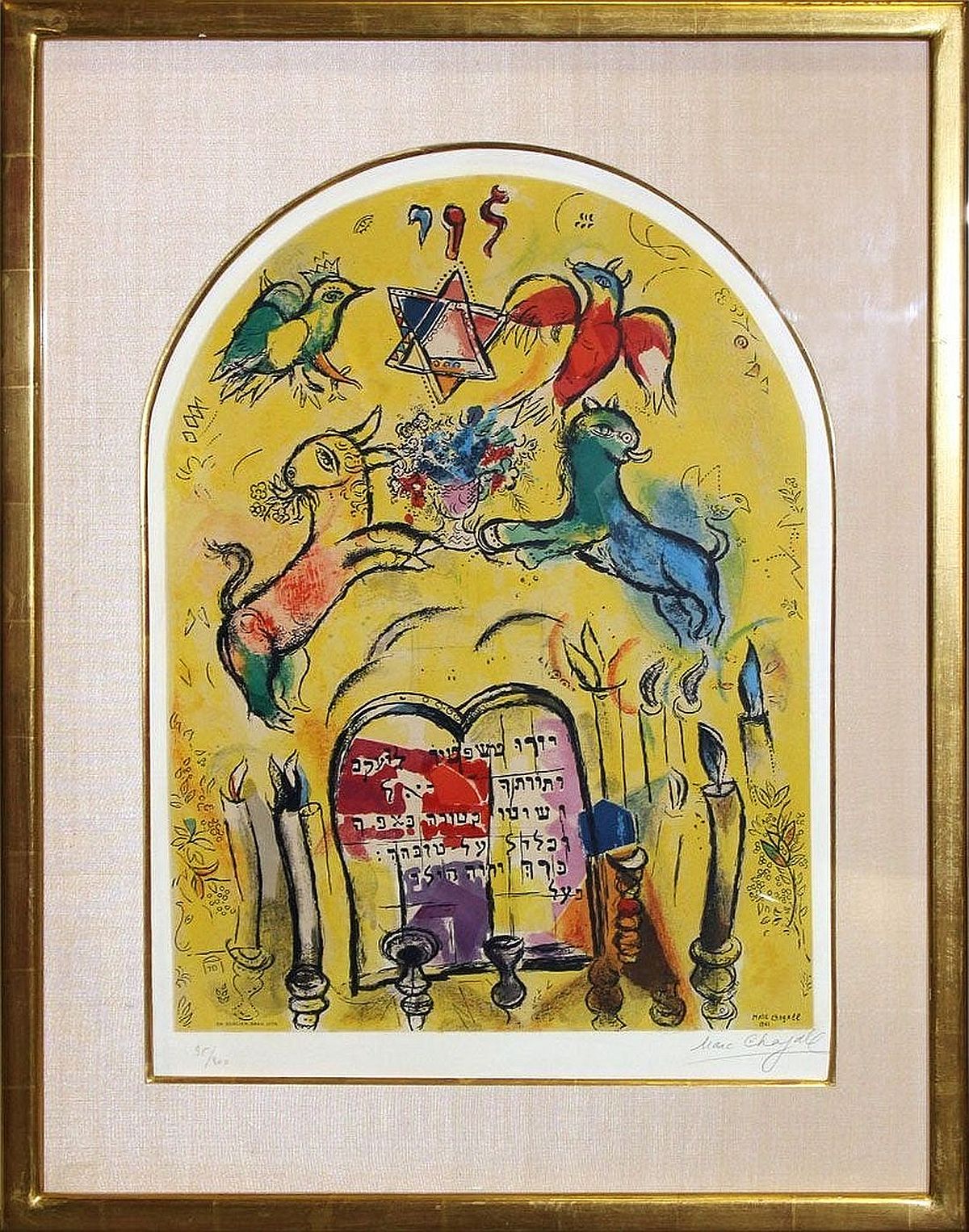 In his later years, Chagall created exquisite stained-glass windows for the Art Institute of Chicago. the United Nations and several French cathedrals. His Twelve Tribes of Israel, a set of shimmering creations located at Jerusalem’s Hadassah Medical Center, is often considered his masterwork. According the Hadassah site, each pane, which honors a son of Jacob, the Biblical patriarch, “is a microcosm of Chagall’s world, real and imaginary; of his love for his people; his deep sense of identification with Jewish history; his early life in the Russian shtetl. … Chagall’s genius transforms time and space.” Each pane has been replicated in limited edition lithographs. Moreover, several adorn stamps issued by the United Nations and the Israel Philatelic Federation. 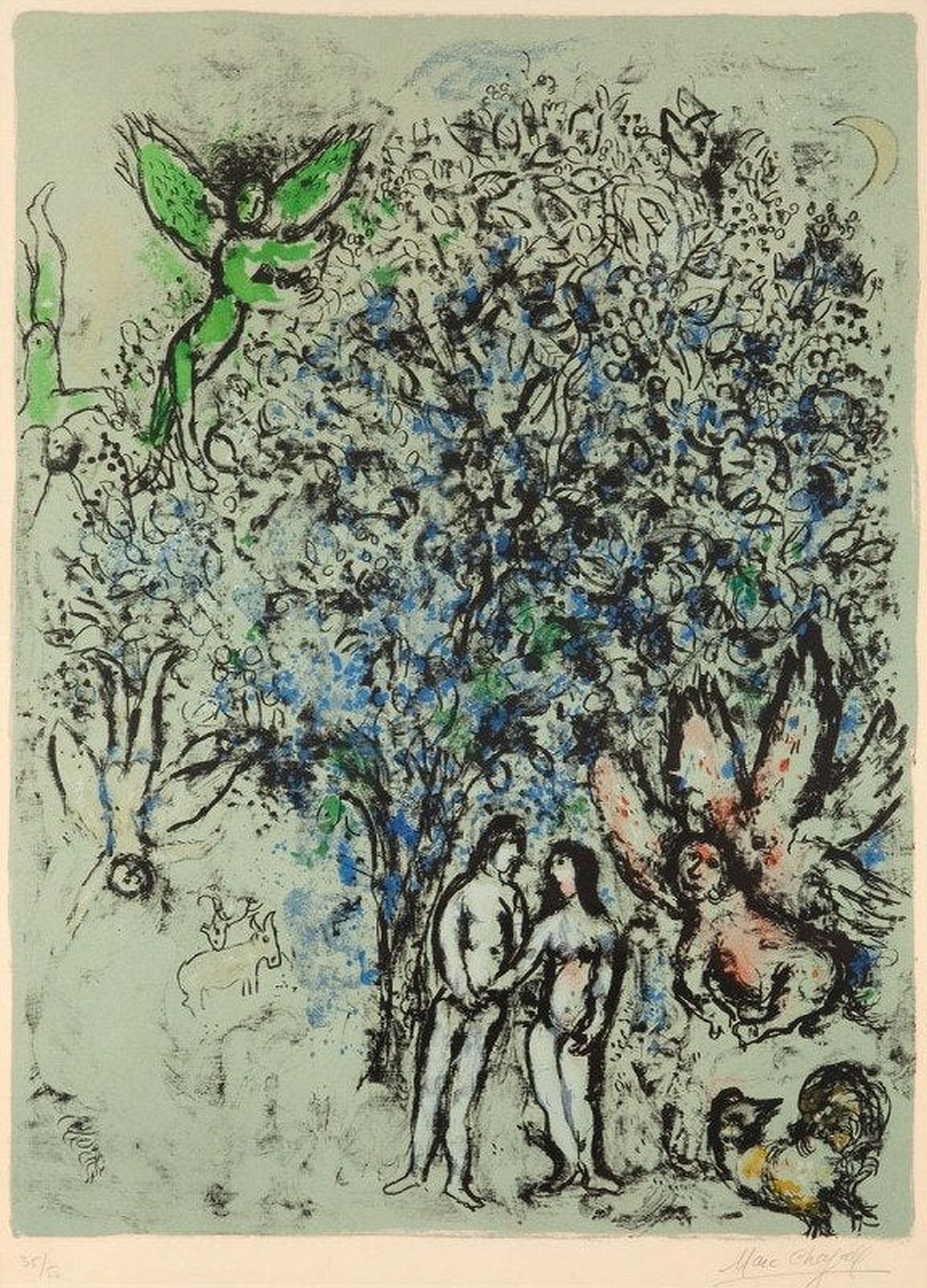 “It has always been difficult to untangle Chagall’s two interlocking reputations—as a pioneer of modernism and as a major Jewish artist, “writes Lauren Bradley, fine art specialist at Rago Arts and Auction. “To be sure, he was both. He experienced modernism’s golden age in Paris, where he forged a highly personal synthesis of Cubism, Symbolism and Fauvism that was widely influential and that would, after a certain period of incubation, give rise to Surrealism. At the same time, he was most emphatically a Jewish artist, whose work was one long dreamy reverie of life in his native Vitebsk.” 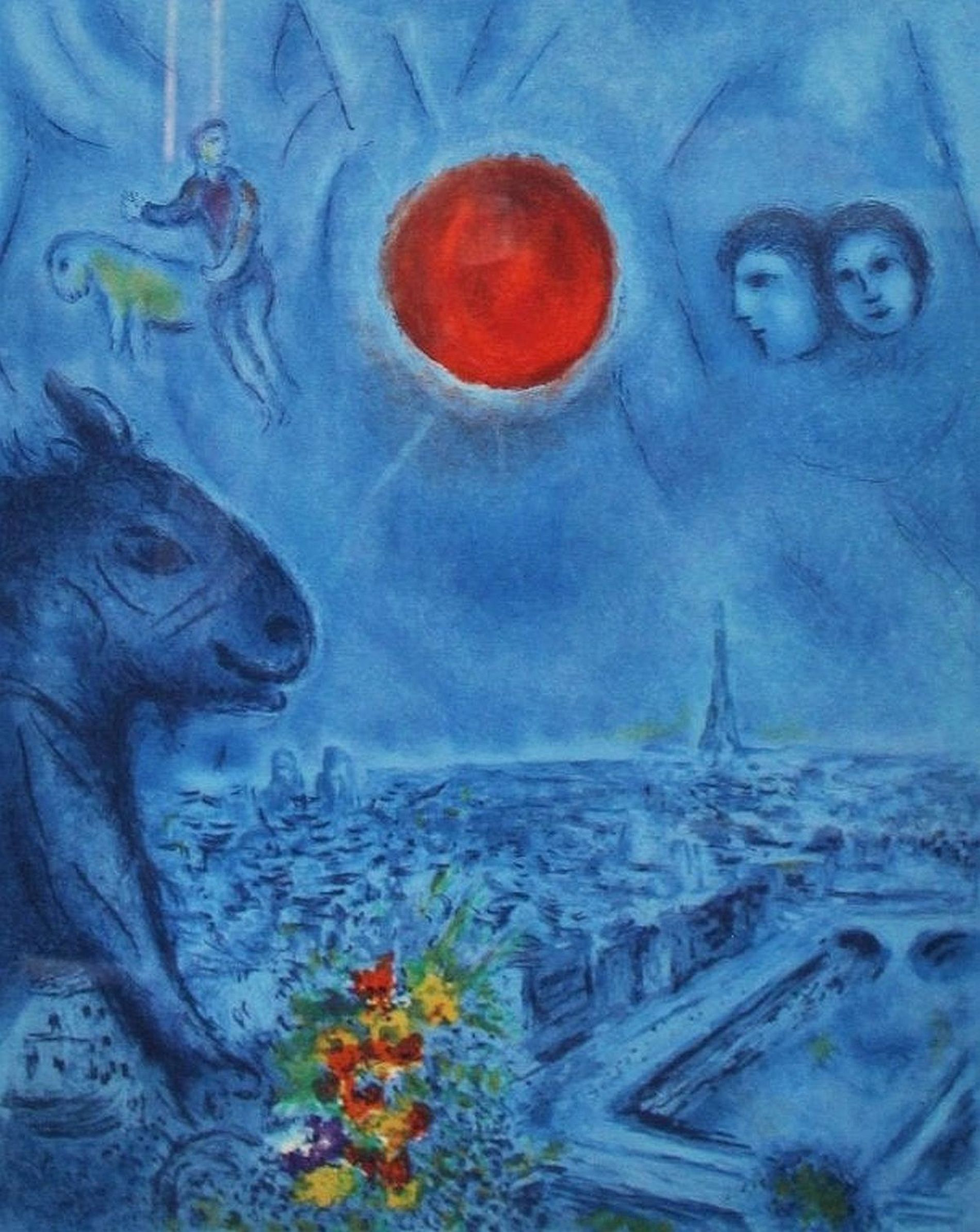 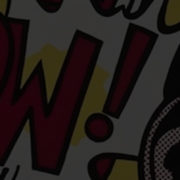 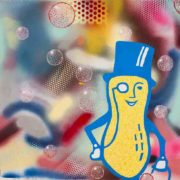 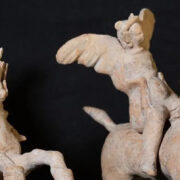 Jasper52 to host designer fashion auction May 5
Scroll to top