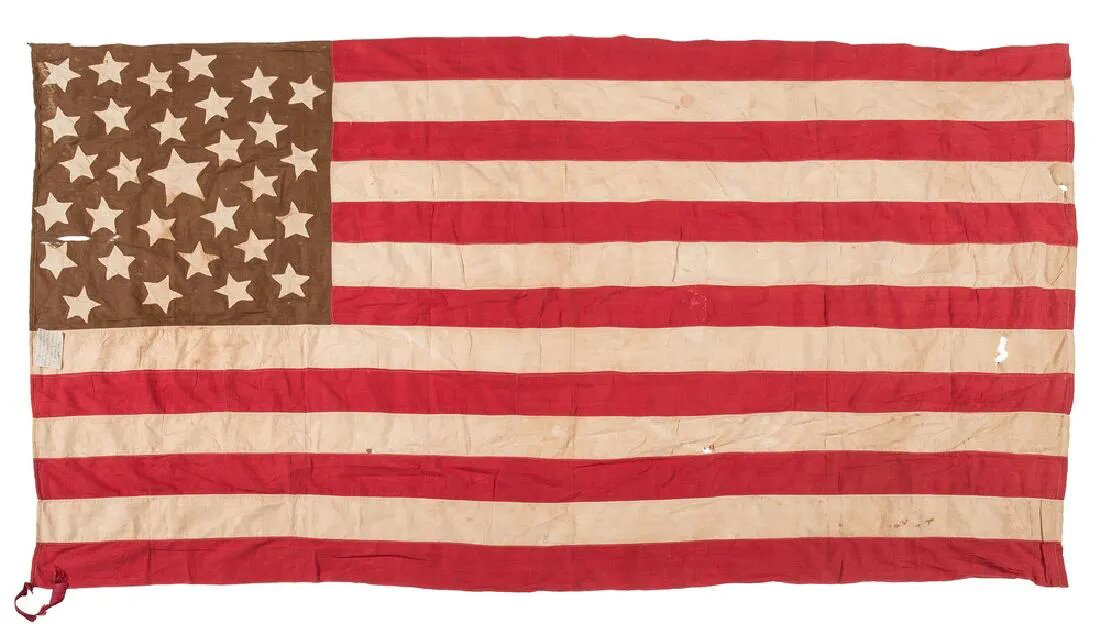 A 30-star American Flag with a charming scattered-star pattern sold for $1,600 plus the buyer’s premium at Cowan’s in June 2019.
Image courtesy of Cowan’s Auctions and LiveAuctioneers

Many national flags are older than the flag of the United States, but no national flag has changed as often. From 1777, with the adoption of the 13-star design, to 1960, when it assumed the current 50-star pattern, the American Flag has officially changed no fewer than 27 times during the past 245 years.

The American Flag’s appearance is familiar, but unfixed. A new star is added to its canton – the word for the blue field in the upper left – for any new state on the following July 4th after its admittance to the Union. With Washington, D.C., and Puerto Rico pursuing statehood, the look of the American flag could change at some point.

A flag that exists in more than two dozen iterations, interpreted by countless creators during more than two centuries, provides rich pickings for collectors. Naturally, some American Flags are more sought-after than others. Below are some of the most coveted styles and forms. 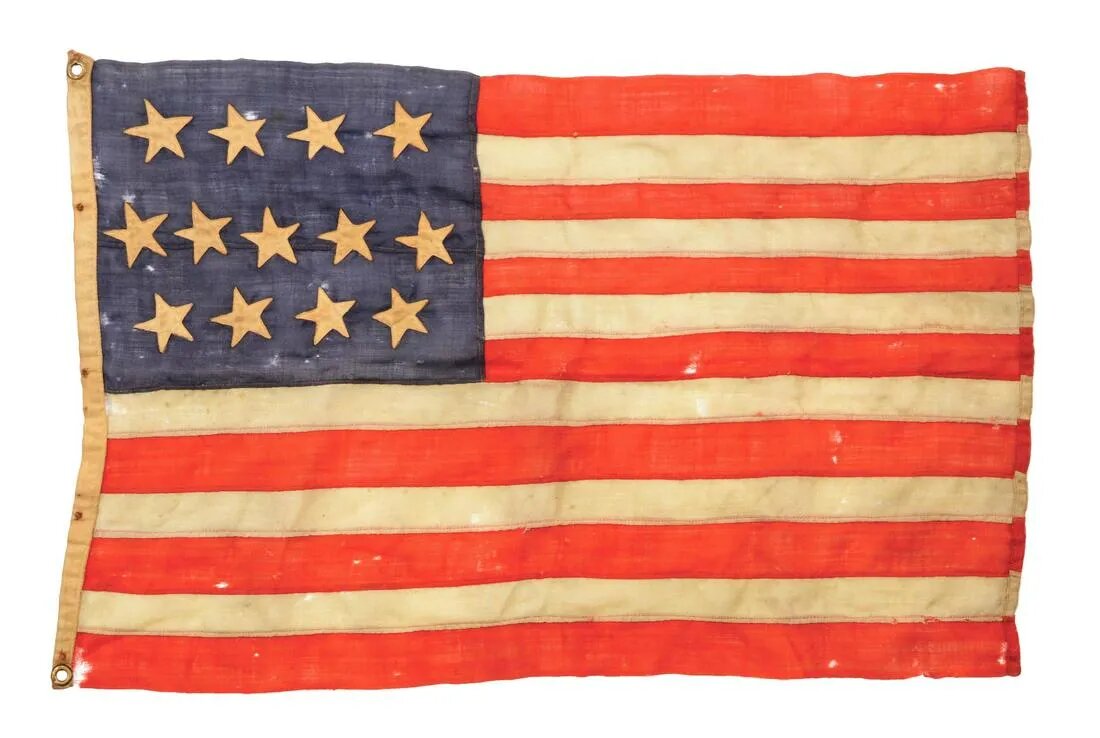 “Resolved, That the flag of the thirteen United States be thirteen stripes, alternate red and white; that the union be thirteen stars, white in a blue field, representing a new constellation.” That was the entire Congressional Resolution of June 14, 1777 that officially adopted the national flag of the new United States of America. There was no meaning attached to the colors, the shape of the stars, or whether the stripes were horizontal or vertical. The flag was only intended to identify the new country aboard Navy vessels when entering foreign ports.

Additional resolutions were adopted later specifying that new states beyond the first 13 would be recognized on the flag with their own stars. This ensured the American flag would routinely change as the country expanded westward.

The 13-star flag remained official until the admission of Vermont and Kentucky in 1795, yet there is no credible 13-star American Flag that has survived the 18th century.

American Flags found at auction that feature 13 stars were used primarily by the US Navy on smaller launch boats from the 1850s to 1916, when the national flag was substituted instead.

Until the advent of the commercial sewing machine around 1850 (which could only sew in a straight line), all American Flags were stitched by hand, and they were not routinely displayed at home. These facts makes any American Flag of this period the most coveted at auction.

American Flags made after 1850 but before the circa 1890 advent of the zig-zag sewing machine (which could sew stars in place) are the second most desired at auction. Flags manufactured after 1900 are less scarce.

It is important to note that the appearance of the American Flag was not regulated until 1912, when a canton with a 48-star box-like pattern was deemed the official flag design for government and military use. Prior to 1912, manufacturers and individuals created any star pattern they wanted, and some of them were exceptionally innovative and eye-catching. Unsurprisingly, the most unusual and creative star patterns have proven the most collectible at auction.

Once codified, the 48-star American Flag relied on all-wool bunting until World War II, when cotton was substituted to conserve the wool for uniforms. Wool flags, then, are generally about a third more valuable than cotton ones.

Collectors who want to build an unusual collection seek American Flags with an unofficial number of stars, such as 14, 16 to 19, 22, 39 to 42, or 47, especially in hand-sewn wool bunting, as most examples are particularly scarce.

Apart from the national flags, individual regimental flags from both North and South were hand-sewn with great care. Any that appear to have been made in haste or seem unusually battle-worn are typically outed as fake. 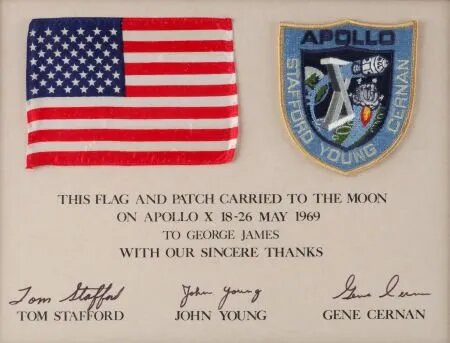 An Apollo 10 American flag that flew to the lunar surface sold for $2,400 plus the buyer’s premium in April 2014. Image courtesy of Heritage Auctions and LiveAuctioneers.

Humans have flown in space only since Yuri Gagarin of the Soviet Union successfully completed one orbit around Earth in 1961. Since then, about 560 individuals have experienced true weightlessness in space, not counting the 242 visitors to the International Space Station (the structure is positioned in low Earth orbit, which sticklers don’t count as space travel).

Astronaut Alan Shepard was the first to carry an American Flag in space during his Mercury Freedom 7 capsule voyage in 1961, roughly three weeks after Gagarin’s flight. Since then, American astronauts have been allowed to pack a few personal belongings in a PPK (personal preference kit) that usually includes small American flags to distribute as souvenirs once they return home. Each of these space-flown flags routinely garner great interest at auction.

But flags flown to the moon are easily the most prized. The 18 astronauts chosen for the six Apollo missions collectively brought several hundred small American flags on their extraterrestrial journeys, leaving few for would-be owners to fight over. 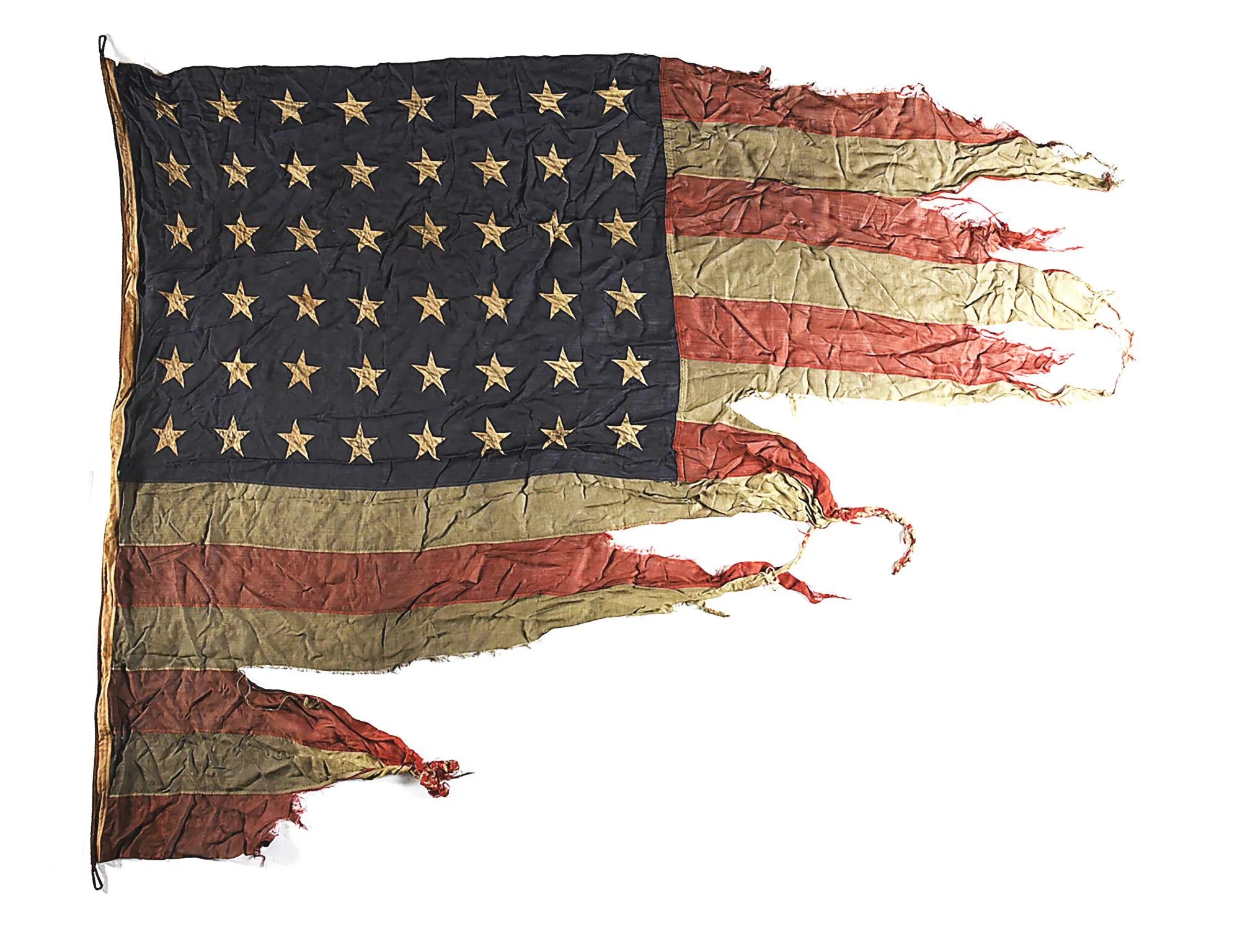 Documentation proves this shredded 48-star wool American Flag flew over the US Capitol on April 6, 1917 – the day that war was declared against Germany. It sold at Dan Morphy Auctions in December 2020 for $1,000 plus the buyer’s premium. Image courtesy of Dan Morphy Auctions and LiveAuctioneers.

A tradition among those serving in the Iraq and Afghanistan conflicts calls for those on patrol to tuck small American Flags inside their uniforms. Once home, the flags are normally given to staff, family members, or institutions. Only occasionally have they sold at auction. Such flags fit the definition of “special event” flags, which can draw the interest of collectors.

An American Flag that flew over the White House or U.S. Capitol during historic or meaningful occasions tend to keep their value. Examples of events that can pique the interest of flag collectors are those flown during inaugurations; when a deceased president or legendary person lies in state; or when an act of war is declared.

Flags flown from a prominent location during a high-profile event such as the Olympics, the World Series, the Super Bowl, and the like can attract serious bidding at auction. Those that hovered over a gathering on a notable day of remembrance, such as a 9/11 anniversary, might be sought-after as well.

Still others that command attention are those bearing the signature of a president or someone of similar prominence; early campaign flags; folk art flags; flags sewn by prisoners of war; and those with a celebrity connection or a backstory that distinguishes its provenance.

More than a Collectible

Any American Flag that bears the official number of stars is never decommissioned even if it is rendered obsolete by an updated design. Whether it floated over a battlefield or traveled to the surface of the moon or never left the flagpole in the front yard, an American flag represents a compelling story of freedom, liberty, and national identity that makes it more than just a collectible.