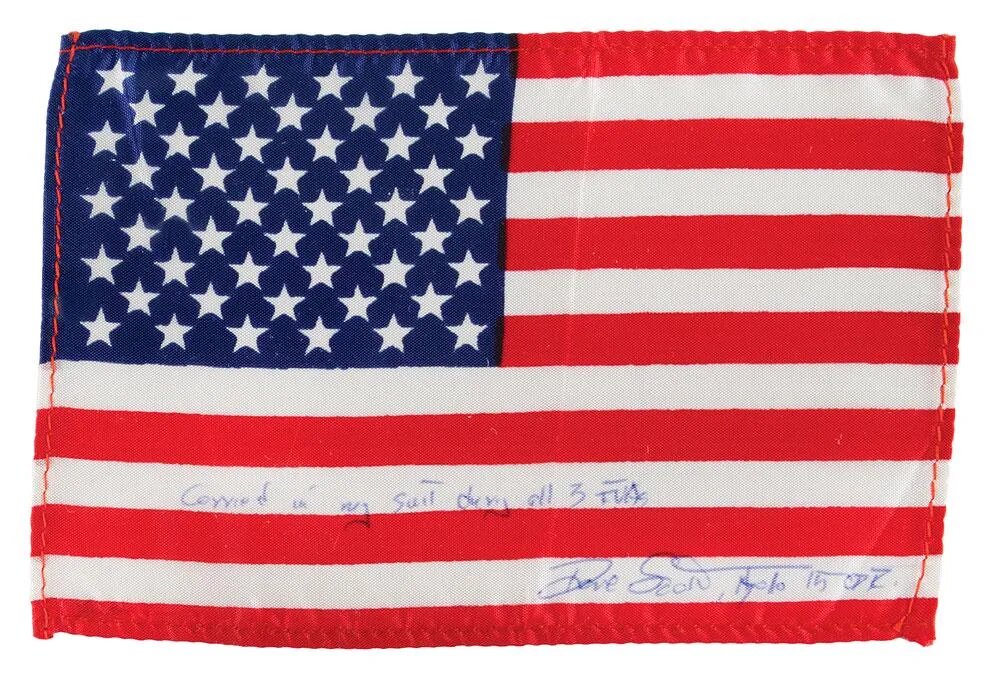 A flag signed by Apollo 15 Commander Dave Scott, which he carried in his space suit when he walked on the moon’s surface, sold in September 2020 for $22,000 plus the buyer’s premium. Image courtesy of RR Auctions and LiveAuctioneers

We can’t all go to space, even if we desperately want to. The Federation Aeronautique Internationale, the governing body that defines space flight, states that as of July 2021, only 574 individuals from 41 countries have made it to outer space, which is defined as traveling higher than 100 miles or 62 kilometers. Of those 574, just 12 have walked on the moon.

The next-best thing to traveling in space is owning a souvenir that did. Flags might be the most iconic space-flown collectibles. They combine national identity, culture, community, ideals and history, all in one recognizable medium. And with the price of launching cargo into orbit still hovering around $10,000 per pound, flags have the merit of being flat, light and easy to roll up or fold. While space-flown flags are relatively abundant compared to other space-flown objects, they aren’t unlimited in number, and those from the early years of space exploration can be difficult to acquire.

In April 1961, Russian cosmonaut Yuri Gagarin became the first human being to circle the Earth. It’s not known whether or not his tiny capsule contained personal souvenirs. In contrast, NASA’s Mercury, Gemini, and Apollo missions routinely permitted souvenir items on spacecraft, the lunar landing craft and even the Lunar Excursion Module (LEM) – what most of us would call the moon buggy. To conserve weight, American flags measuring no larger than 4 by 6 inches were allowed on board (larger flags were flown as well, just not as many). Individual astronauts carried these flags in a Personal Preference Kit, or PPK. 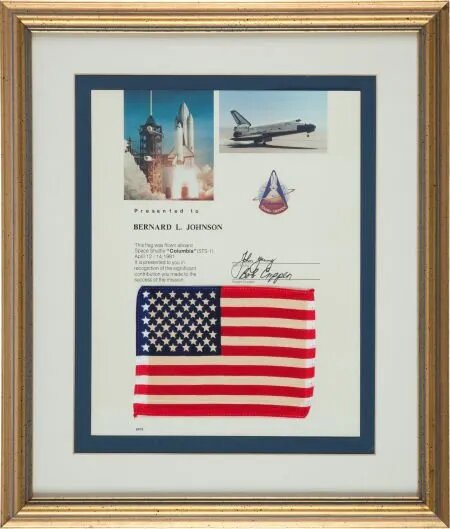 A flag flown on STS-1 Columbia, the first space shuttle mission, sold in May 2016 for $3,000 plus the buyer’s premium. Image courtesy of Heritage Auctions and LiveAuctioneers

NASA had its own Official Flight Kit, or OFK, in which flags and similar souvenirs were sent on behalf of the agency itself. Anything in the astronauts’ kits belonged to them; anything in the NASA kits were property of NASA. Collectors care about this distinction. Flags carried by American astronauts in PPKs have higher auction values overall than those that ventured to space in a NASA OFK.

Several hundred American flags went to space on the early NASA missions, and most of those were of the 4-by-6-inch variety, according to collectspace.com. Many more flags were brought into space during the NASA shuttle program. Tthe final shuttle mission, STS-135 Atlantis in 2011, listed 20,000 small US flags in its cargo manifest. Flags continue to make the extraterrestrial roundtrip as part of the inventory of the International Space Station.

Larger flags carried aboard the early NASA missions and on shuttle flights were usually earmarked for specific presentations at schools, nonprofit programs, government agencies and as gifts for international visitors. The website spaceflownartifacts.com states these examples rarely appear at auction.

Collectors consider four major factors when determining the value of

1 – which space mission took it to the stars and back

3 – where it was stored during the voyage

4 – who owned the flag during the flight and after it returned to Earth. 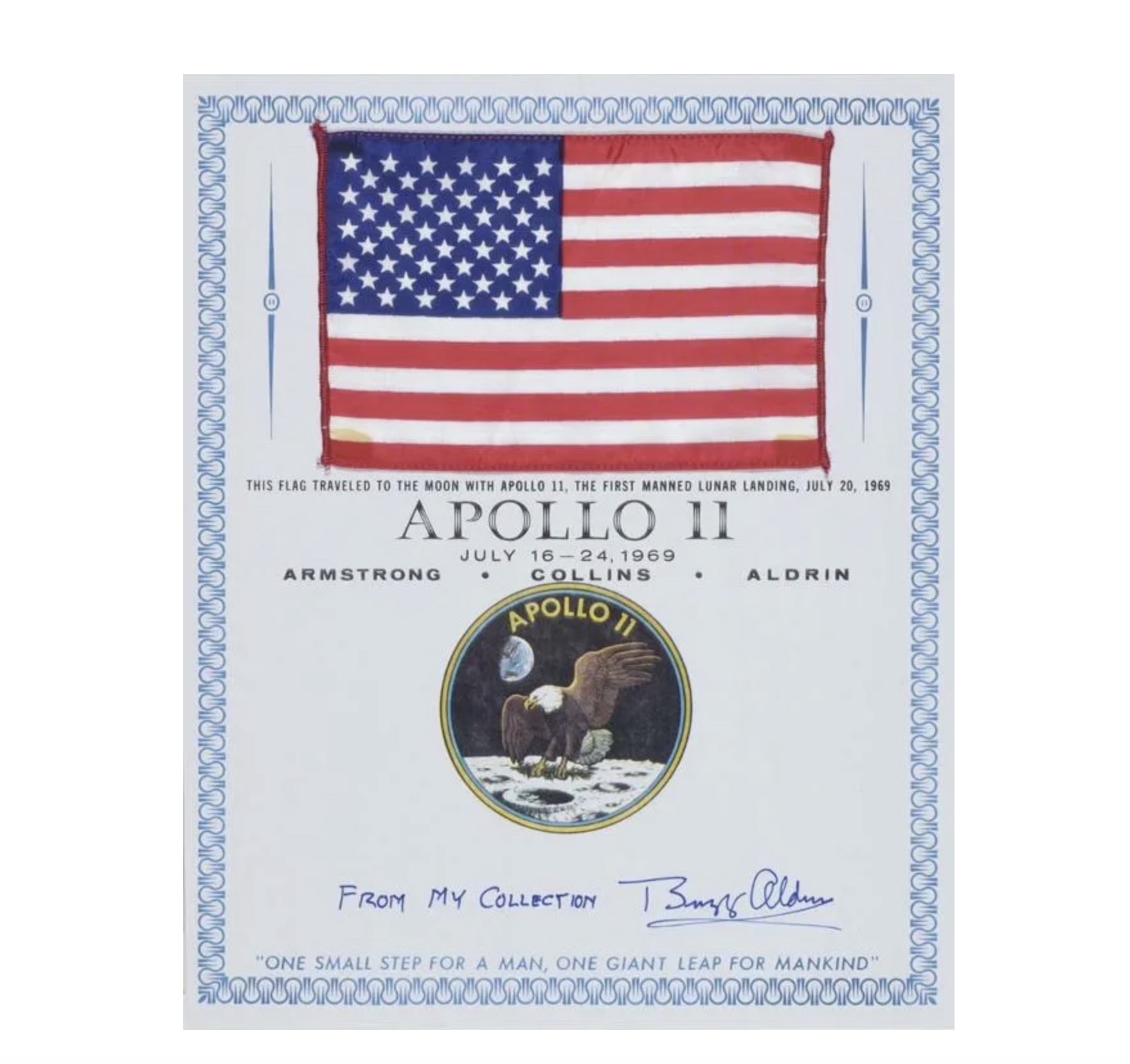 A flag carried aboard the Apollo 11 mission and later signed by Apollo 11 astronaut Buzz Aldrin sold in November 2004 for $14,000 plus the buyer’s premium. Image courtesy of Swann Auction Galleries and LiveAuctioneers

Flags flown on Mercury and Gemini NASA missions are relatively scarce and highly desired because they rank among the earliest objects to orbit the planet. Flags from space shuttle missions and those taken aboard the International Space Station qualify as space-flown but are much more accessible and affordable, especially for new collectors.

Understandably, flags flown on any of the 12 Apollo lunar missions always have serious auction value. Even then, where the flag was stored during the lunar missions affects how ardently bidders pursue them at auction. Flags that stayed in the spacecraft are prized, but those that were carried onto the lunar surface in the space suits of the astronauts are worth even more.

Not all Apollo missions are equal, either. Flags flown aboard Apollo 11, the first mission whose astronauts walked on the moon; and Apollo 13, the mission that was aborted due to mechanical difficulty, command more than flags from the other four moon missions. And as with any realm of collectibles, historic firsts affect an object’s value. The spaceflownartifacts.com website notes:

“Apollo 8 being the first mission to the moon gives flags carried on that mission a certain cachet.” 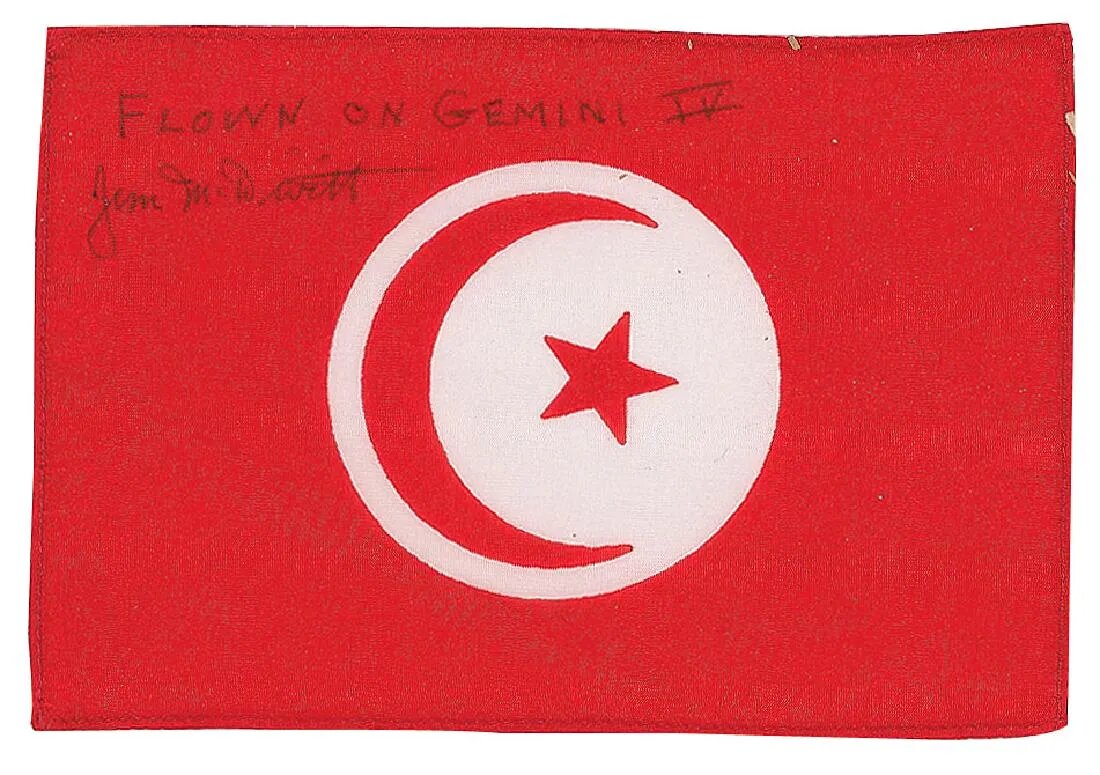 Foreign national flags from early NASA flights are relatively rare. This signed Tunisian flag that flew aboard Gemini 4 sold in June 2019 for $1,153 plus the buyer’s premium. Image courtesy of RR Auction and LiveAuctioneers

The entity the flag represents also plays a role. Collectors bid the most for American flags, followed by foreign national flags, state or territory flags, the flag of NASA or other agency flags, and those with the livery of a particular church, school, corporation or other entity that has sentimental value to the astronaut who stashed it in a PPK.

Provenance obviously matters, and is fairly easy to confirm for many space-flown flags. Some astronauts from early missions signed their names directly onto a flag along with mission-specific details, but this practice wasn’t consistent or standardized (other astronauts only added a serial number to the flag, which was accompanied by a signed certificate). Later on, an agreed procedure took shape: Space-flown flags were mounted on presentation certificates created by each individual astronaut. These certificates usually featured a signature, mission details, perhaps a mission patch and a date – a format consistent enough to reliably establish provenance. NASA, too, also created specially-designed certificates of its own for its flag presentations.

Collectors should be wary of unmounted flags that are not signed or identified in any way. A story alone is not sufficient to prove a flag left the Earth and came back home again. Mounted flags that are accompanied by a handmade document or photocopy of a signed or unsigned certificate lack the power of better-established examples. 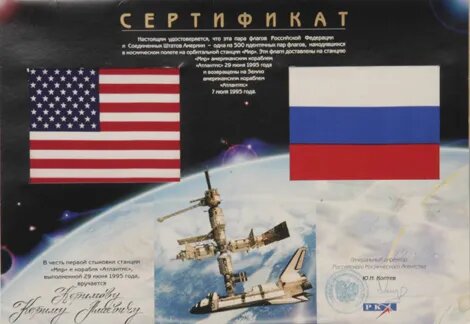 A set of space-flown American and Russian flags commemorating the joint docking effort of the US space shuttle with the Russian space station Mir in 1995 sold in April 2005 for $600 plus the buyer’s premium. Image courtesy of Aurora and LiveAuctioneers

Human beings will continue to venture into space and deeper into the solar system. Space tourists, who pay top dollar to experience thrills that were once limited to a professional elite, are making their own history. One thing is for sure: current and future space travelers will continue to take flags with them, and there will always be collectors who clamor for them. 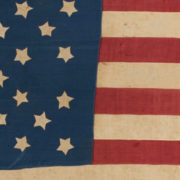