As far back as 5,000 years ago, a “purse” was a small, stitched fabric bag which men used to keep their coins safe. Such a bag was either attached to a man’s coat or worn at the waist. It was not until several millennia later that this type of purse was replaced by pockets in clothing, and in the 19th century, wallets.

Women also needed a way to carry their “indispensables,” giving rise to various versions of the handbag, which was introduced in France and, later, embraced in other parts of Europe. At first it was a reticule, a very slender, handmade drawstring bag which women used from the late 18th- to early 19th century. It looked similar to a modern-day evening bag.

With railway travel becoming more common later on in the 19th century, something more durable was needed for the transport of necessities. The small, mostly decorative ladies’ handbag just couldn’t withstand such conditions. That changed in 1841 when Samuel Parkinson, famous for his butterscotch confection, commissioned trunk maker H. J. Cave to create a completely matched set of variously-sized traveling trunks, boxes and handbags. Each was made from the same sturdy material, in a matching pattern. This is considered the very first order that launched a luxury market that was estimated at nearly $60 billion dollars in 2019. 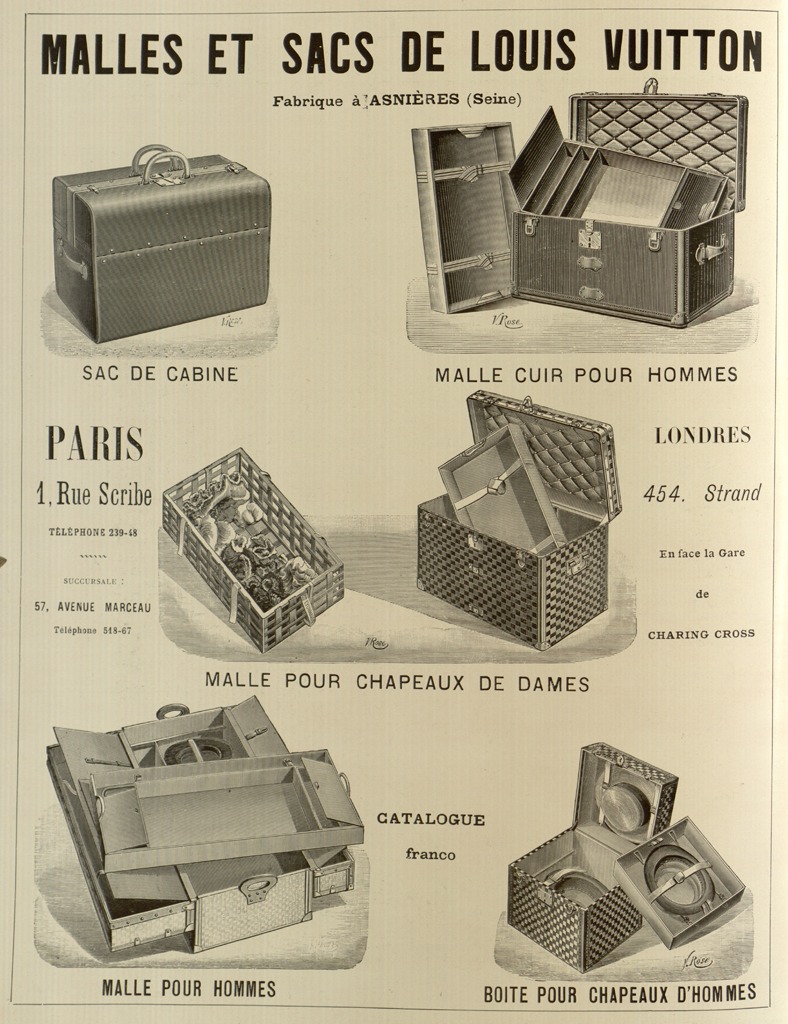 An advertisement for Louis Vuitton that appeared on the inside front cover of the French publication ‘Le Theatre’ in July 1898. Source: Villanova University Digital Library, image in the public domain in the United States where copyright term is the author’s life plus 70 years.

Louis Vuitton, a trunk maker in Paris, took notice. One of the notable features of a traveling trunk created by H. J. Cave was its innovative flat top, making the luggage easier to stack. The more commonly seen round-top trunk was designed to repel water, but it was difficult to load and stack onto railcars, coaches or ocean liners. In 1854 Vuitton incorporated treated canvas on the flat tops of his trunks to better repel water while also making them easier to stack and stow. His style was so distinctive that imitators started copying it almost from the very beginning. In 1898, Louis Vuitton added a handbag to the company’s product range.

Today, 122 years after its initial entry into the marketplace, the Louis Vuitton handbag is still considered the ultimate accessory, but it is also the most counterfeited of all luxury bags. How can you make sure you’re buying an authentic LV bag as opposed to a fake? It’s all in the details.

In order for a handbag or other luxury item to be recognizable, the brand must be consistent with its identification.

LV’s initial pattern for its flat-top trunk was a gray Trianon Canvas (all patterns are identified as a “Canvas”), in 1872 the design was changed to beige and red vertical stripes. Since it was too easily counterfeited, another version called the Rayee Canvas with beige and brown vertical strips was introduced in 1876, but it, too, was counterfeited. The Damier Canvas design, a checkerboard of contrasting light and dark colors, replaced Rayee Canvas in 1888, with the words “marque L. Vuitton déposée” imprinted within a few squares as a logo to identify it as a Louis Vuitton registered product. 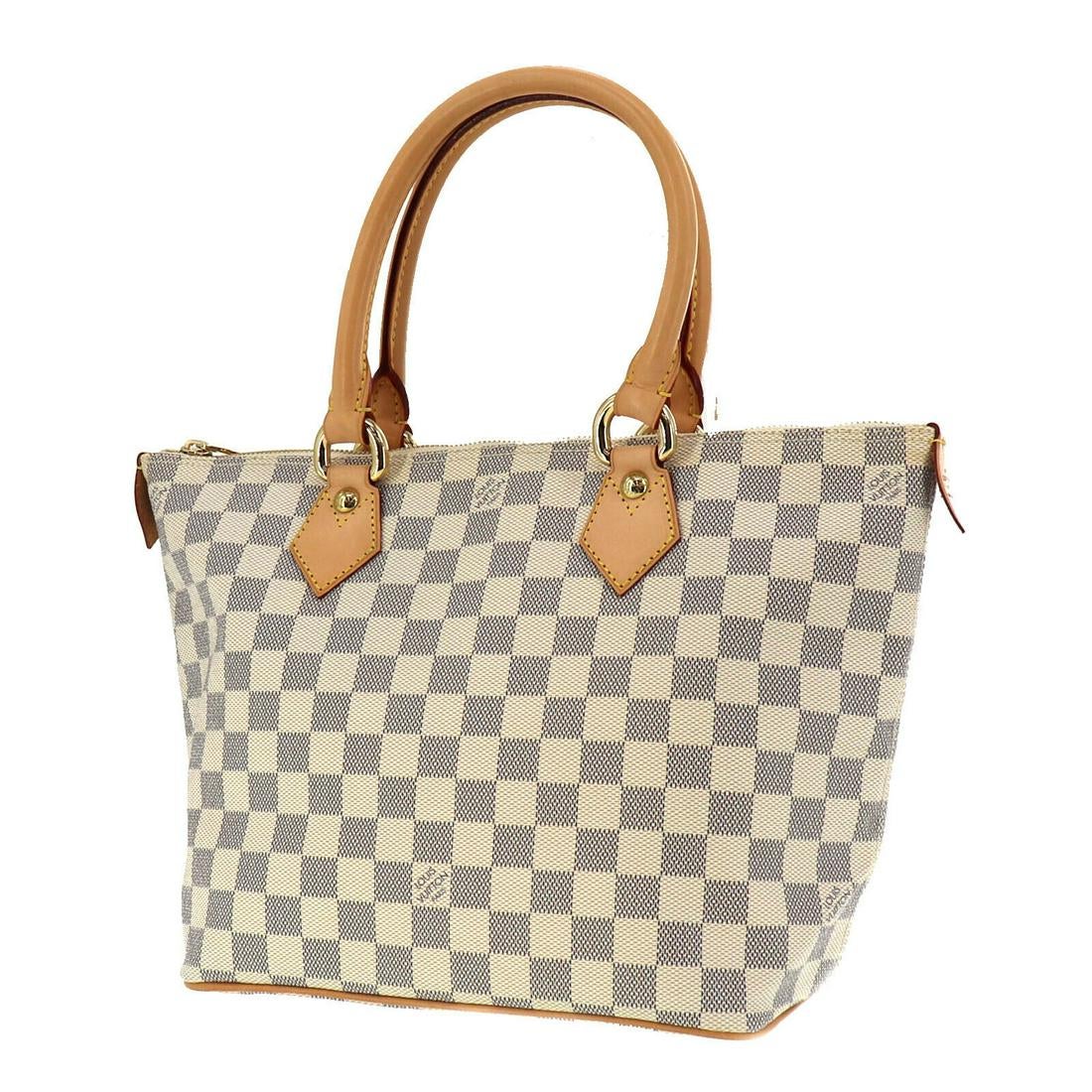 Regardless, the counterfeits persisted. By the time George Vuitton succeeded his father, Louis, who died in 1892, it had become abundantly clear that a different logo needed to be adopted. In 1898, the motif changed once again, to its now-familiar quatrefoils, floral symbols and the “Louis Vuitton” logo called the Monogram Canvas. The design was based on the Japanese mon of a simple, stylistic representation of an object important to a family, similar to a European heraldic coat-of-arms.

Each part of the Monogram Canvas is trademarked, and any counterfeit that shows even the slightest variant is challenged vigorously with lawsuits, no matter how small the changes. Protecting its brand from counterfeiters is of utmost importance to Louis Vuitton and to those who purchase LV handbags, who want to make sure their accessories are authentic. How can a buyer be sure that their handbag is the real deal? You just have to look closely.

There are many distinctive aspects to note in an authentic Louis Vuitton handbag. Each and every component is perfectly matched and assembled, stitched or riveted by hand. On average, it takes about four hours to create the work of art that ultimately becomes an iconic LV handbag. Each part of the finished handbag matters. 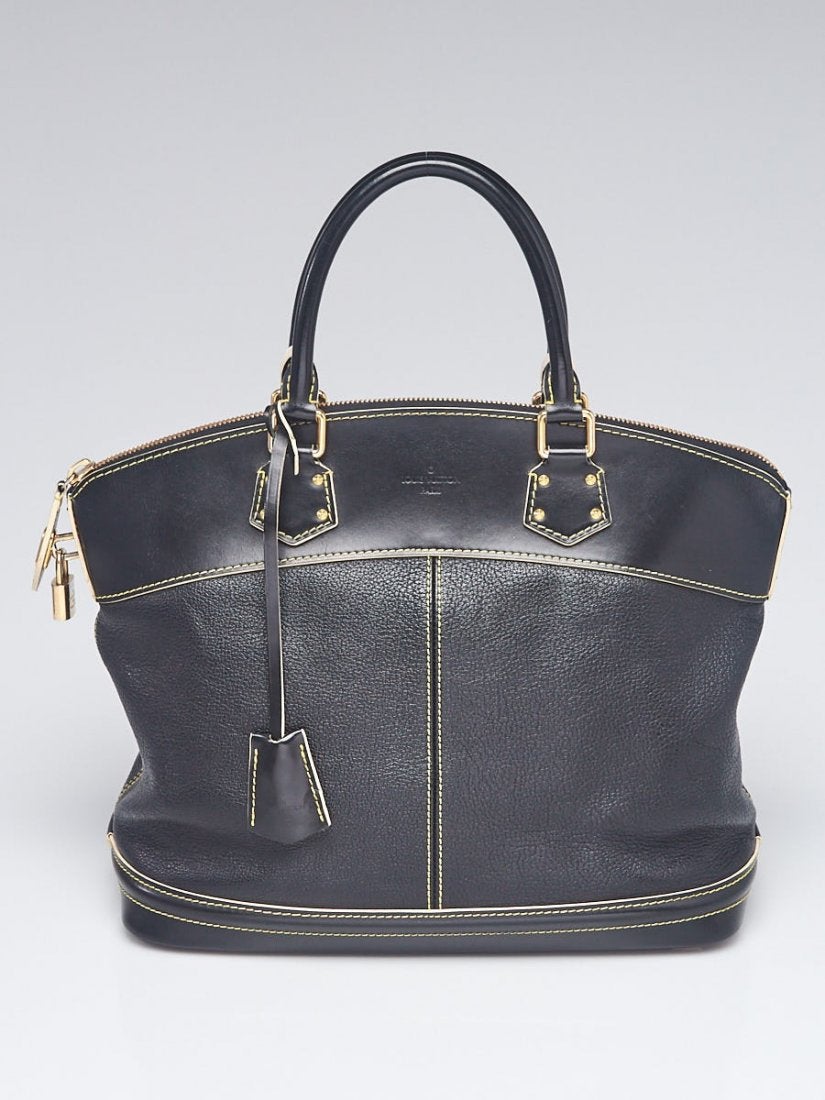 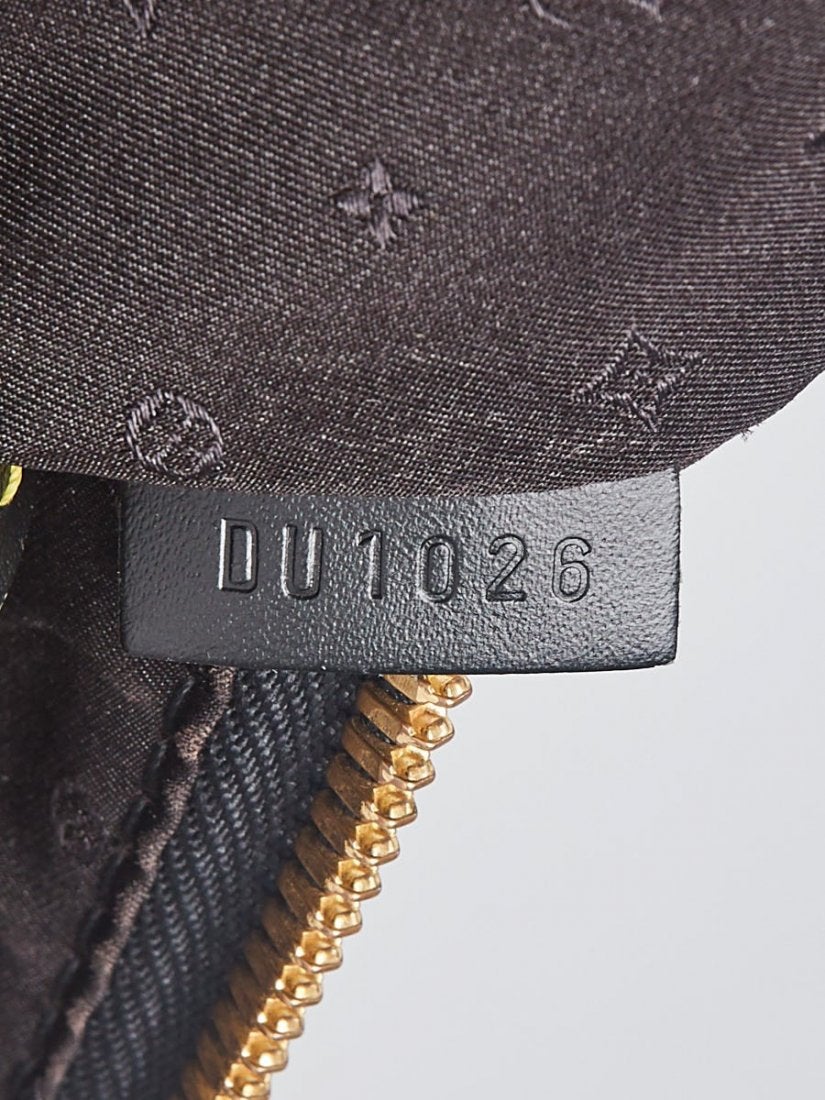 A clear example of an internal leather tag in the same color as the leather trim of a genuine Black Suhali Leather Lockit MM Bag features two letters and four numbers, meaning it was made in Paris in December of 2006 (letters DU is code for France; first and third numbers indicate month; second and fourth number indicate year). Image courtesy Japan Treasure Auction and LiveAuctioneers

There is no better way to know a Louis Vuitton handbag is authentic than by going directly to the source: Louis Vuitton authorized stores and boutiques. Their products are never “discounted,” they are not wholesaled to the public, and they never go “on sale.” In fact, the only way to buy a new Louis Vuitton product is to be invited to do so.

If you are presented with the opportunity to purchase a Louis Vuitton handbag, either from a reputable auction or boutique that is not operated by Louis Vuitton, here are points to note: 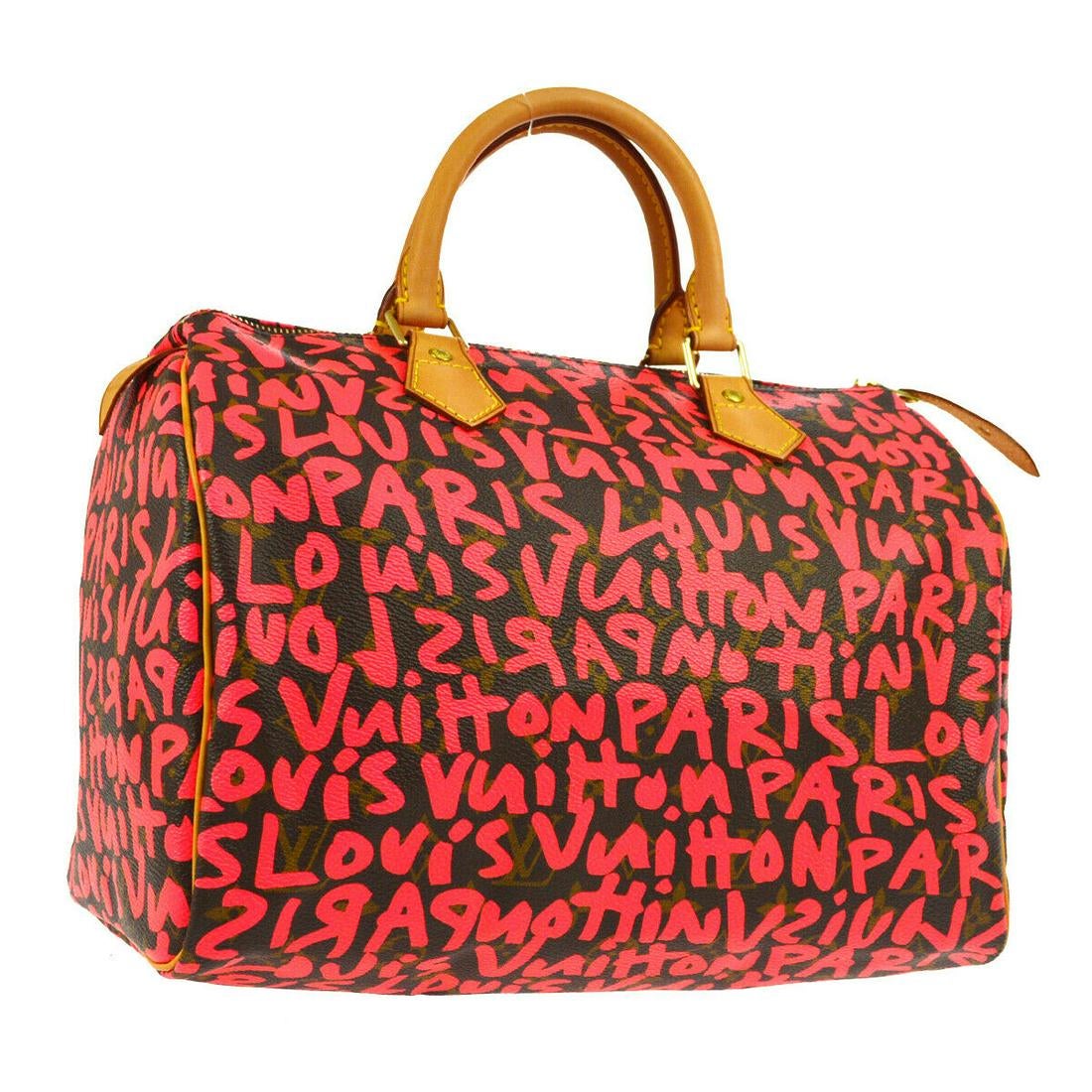 On occasion, LV will choose to produce authorized limited-edition handbags such as this striking red and black Speedy 30 handbag designed by Stephen Sprouse with Marc Jacobs in 2001 with the words ‘Louis Vuitton Paris’ written as graffiti. The limited edition also came with a charm bracelet, the only piece of jewelry ever released by LV. It sold for $2,800 (plus buyer’s premium). Image courtesy Bidhaus and LiveAuctioneers

Even the font on the logo should be researched beforehand to determine if it is correct in size, shape, color and material. With all the different styles and features seen in Louis Vuitton handbags, research matters. The watchword at Louis Vuitton is “perfection.” Each handbag created by LV is a very limited work of handmade art whose materials, fasteners, and workmanship are of uncompromising quality. 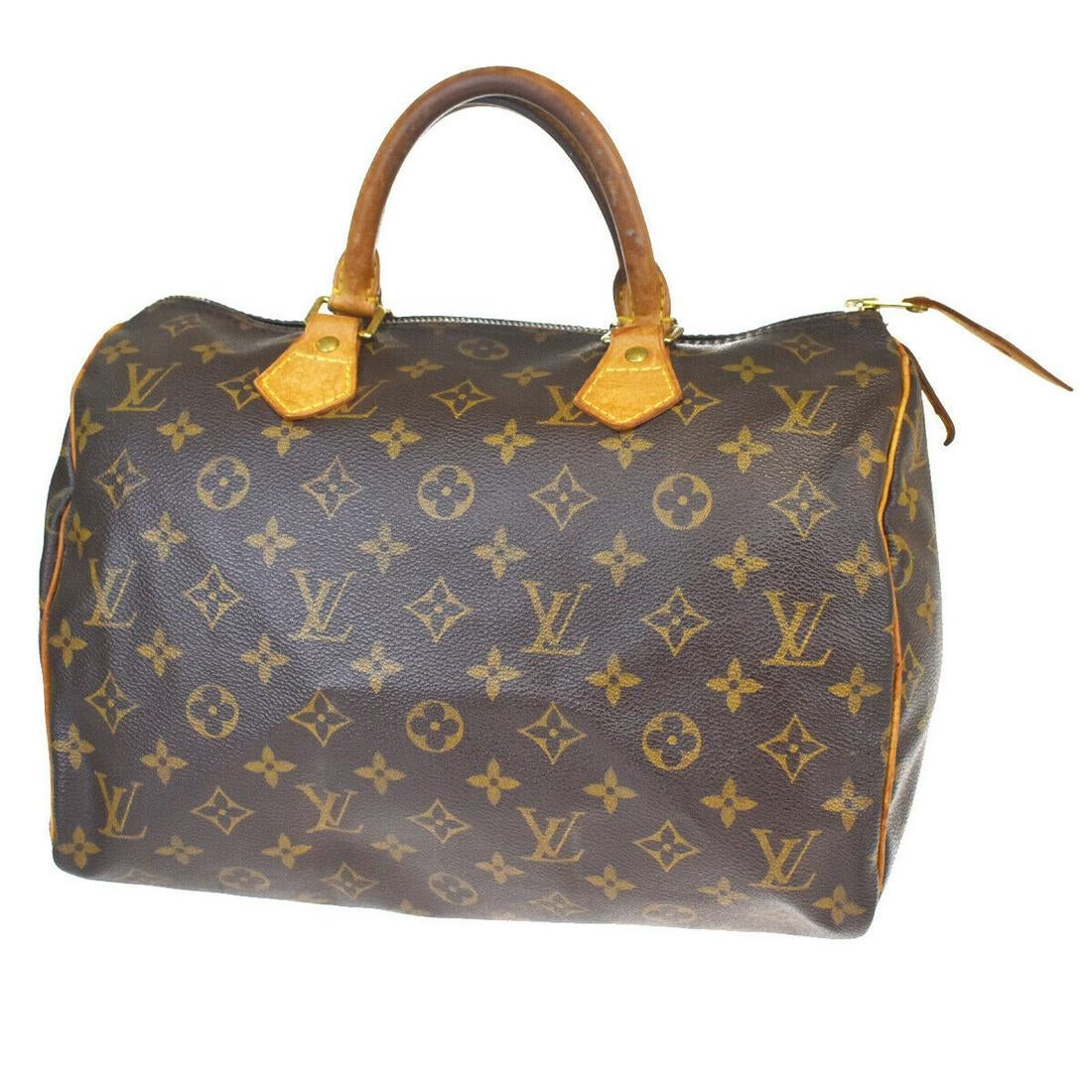 According to Forbes, the counterfeiting of top-tier luxury goods such as those produced by Louis Vuitton is around a $600 billion industry. While this staggering number shows that there are many who will knowingly purchase a cheaply-made fake bag, the bottom line is, it’s illegal. If you can’t afford a genuine handbag made by the French company whose history and workmanship are second to none, the best advice is, save up for it. Some things are so special, they just can’t be duplicated. 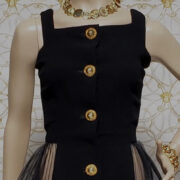 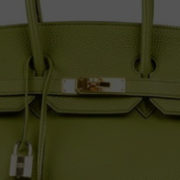 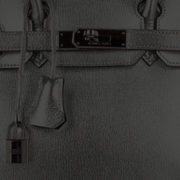 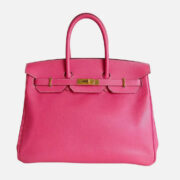 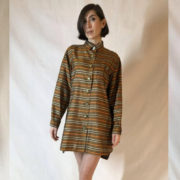 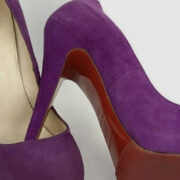 Louboutin purple pumps step up in May 31 Luxury Fashion sale 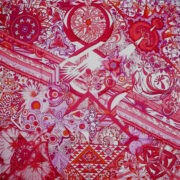 It’s hip to be square: all-Hermes scarf sale, May 17 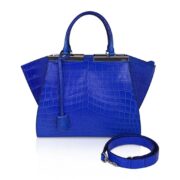 No. 1 issues stand out in comic book auction Nov. 15
Scroll to top