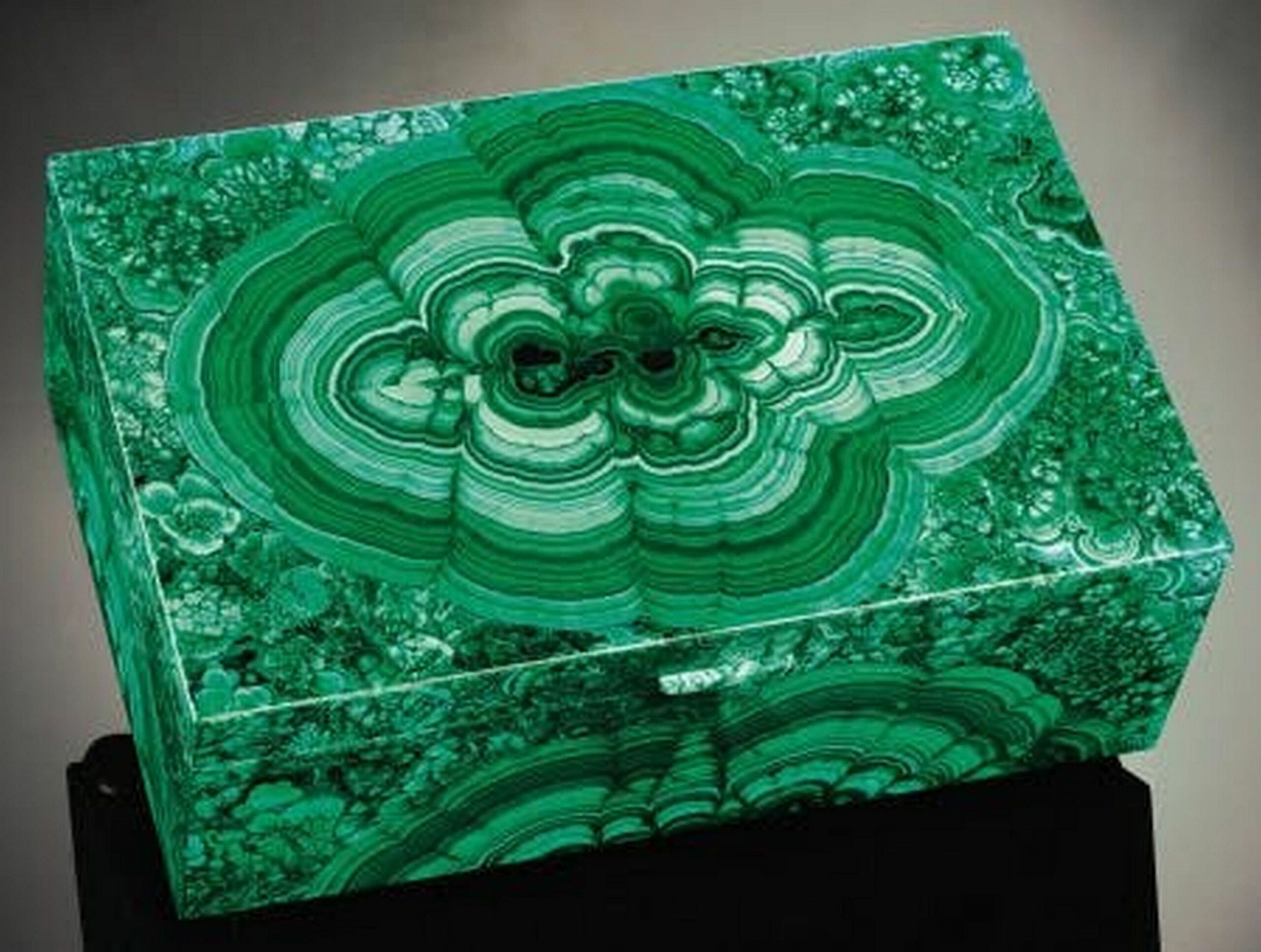 Malachite inlay box with fine flower-type patterns, which sold for $5,250 plus the buyer’s premium. Image courtesy Heritage Auctions and LiveAuctioneers

Malachite, memorable for its rich green color and silky, swirled patterns, is actually weathered copper ore. Ancient Egyptians, who sourced this mineral in the Timna Valley in what is now southern Israel, believed that it held magical, protective powers. They carried malachite seals and amulets, and to guard against ocular diseases commonly found along the Nile River, they ground it finely, then lined their eyes with the powder.

To Egyptians, malachite also signified life, death, and rebirth. In addition to portraying Osiris, the god of the dead, with green skin, they decorated coffins and created burial chamber paintings with malachite-green pigment.

From the 7th century on, malachite pigments appeared abundantly in Chinese and Japanese paintings. But the pure, coarsely ground hue that Renaissance artists favored proved very difficult to “work,” so they rarely used it. Eventually, ground malachite fell from use entirely, replaced by artificial pigments. 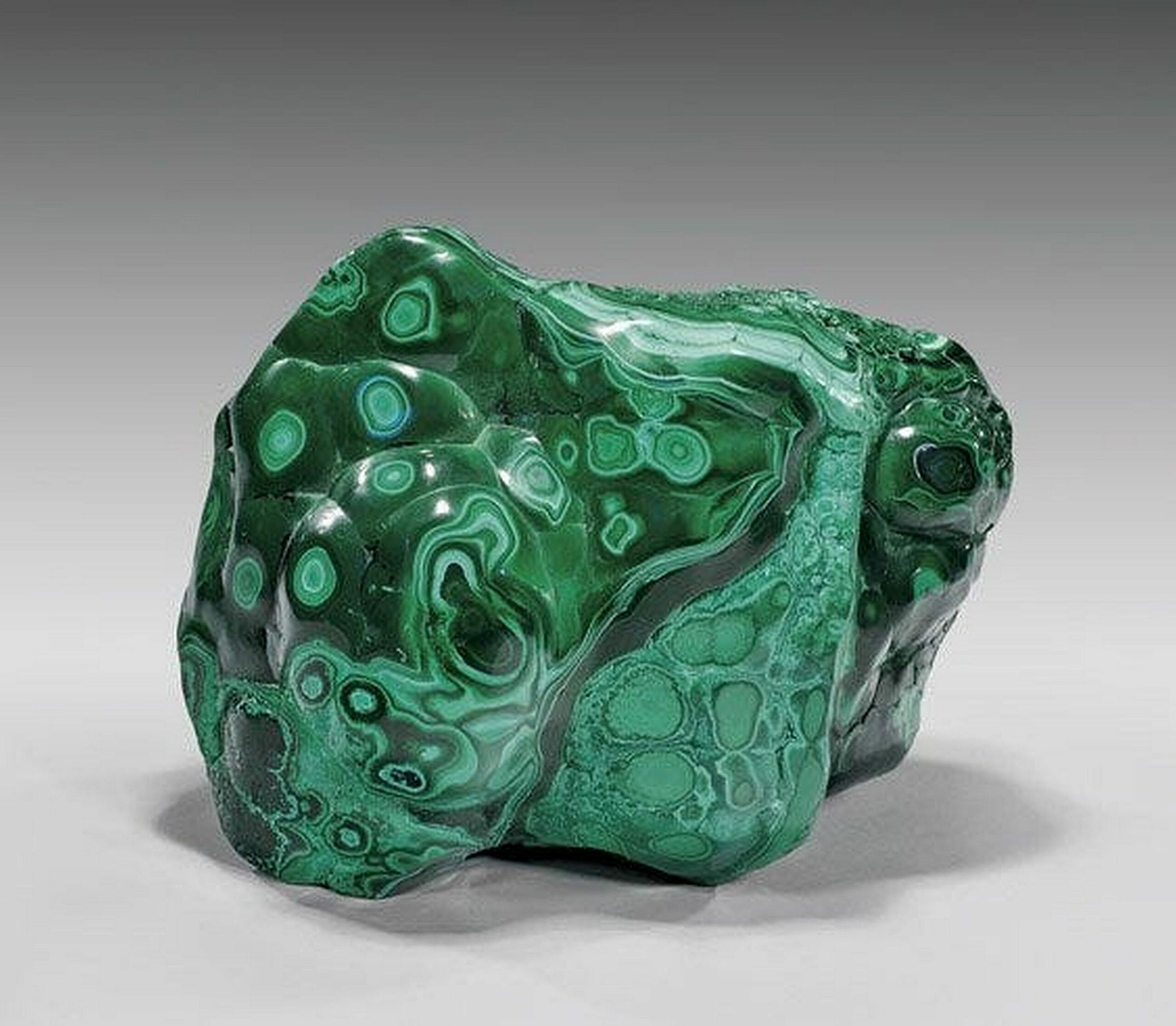 Massive malachite freeform with one side polished and the other left in its natural finish, which sold for $2,500 plus the buyer’s premium in 2014. Image courtesy of I.M. Chait Gallery/Auctioneers and LiveAuctioneers

Limited deposits of malachite have since been discovered in Arizona, Brazil, Mexico, Australia, France, and the Democratic Republic of the Congo. Scores of contemporary jewelers, including David Webb, Cartier, Chopard, and Van Cleef & Arpels, feature lavish malachite pieces in their permanent collections. Yet many museum experts, connoisseurs and collectors consider Russian malachite, discovered in the Ural Mountains, to be the finest of all.

“Malachite was a favorite of Russian tsars, who used it to decorate their lavish palaces, such as the Winter Palace in St. Petersburg,” said Lauren Goforth, Sr. Researcher at M. S. Rau. “Year after year, the Russian treasury paid top dollar to hoard the best malachite, much of which went into Romanov palaces and extravagant objets d’art,” she said. “Today, the Hermitage Museum possesses more than 200 examples of this ‘palatial’ malachite, displayed in the legendary Malachite Room.”

Some of the Malachite Room’s massive urns, columns and grand fireplaces, which are carved from huge, solid blocks of malachite, feature variegated light-to-dark banding in graceful, sweeping curves. Others displaycharacteristic so-called “peacock eye” patterning. Smaller pieces, made from blocks too pocked with pits to be cut into slabs, were crafted through Russian malachite mosaic. This technique entailed skillfully laying thin malachite veneers on basalt, slate, marble or metal bases in artful artificial or random patterns. 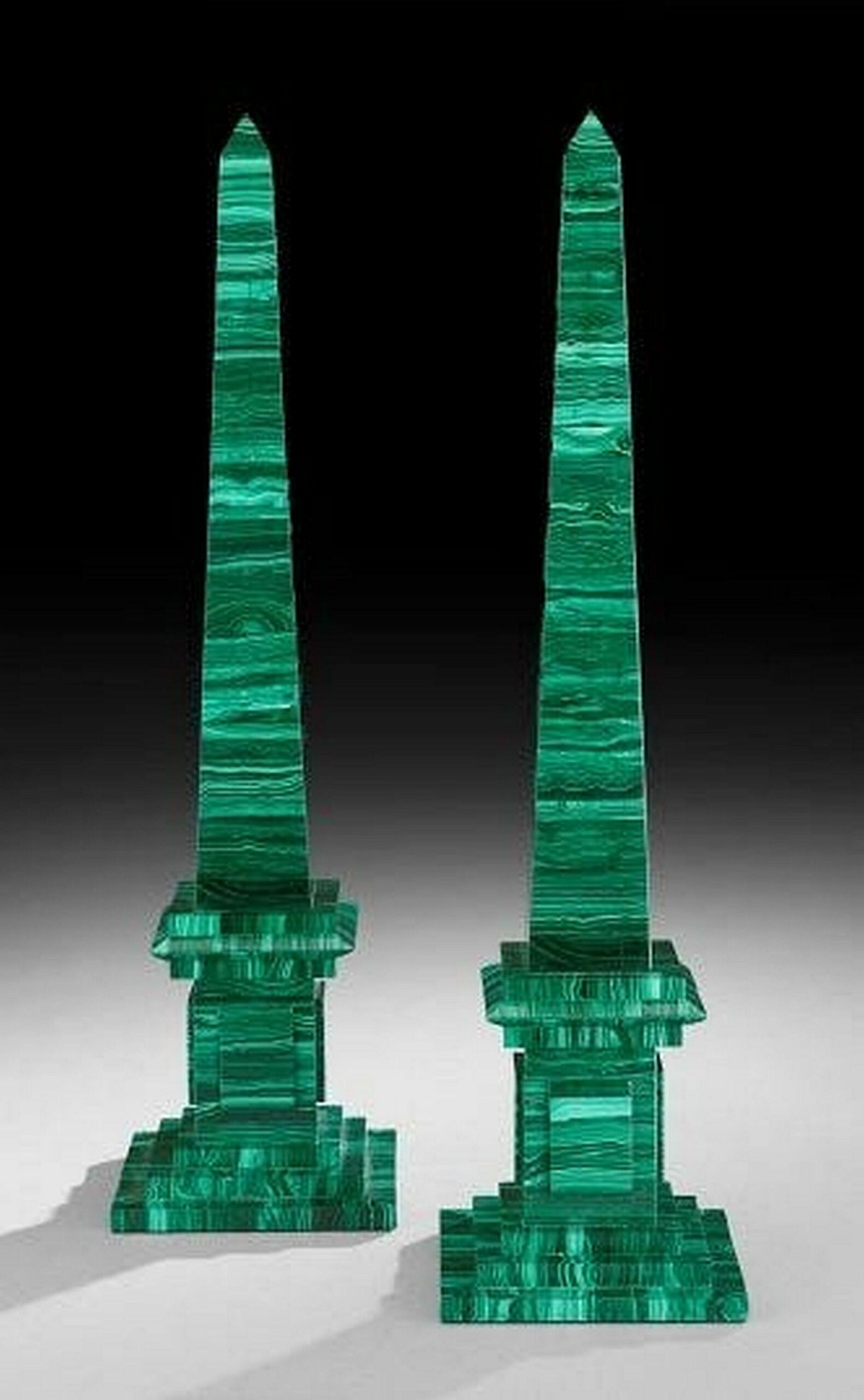 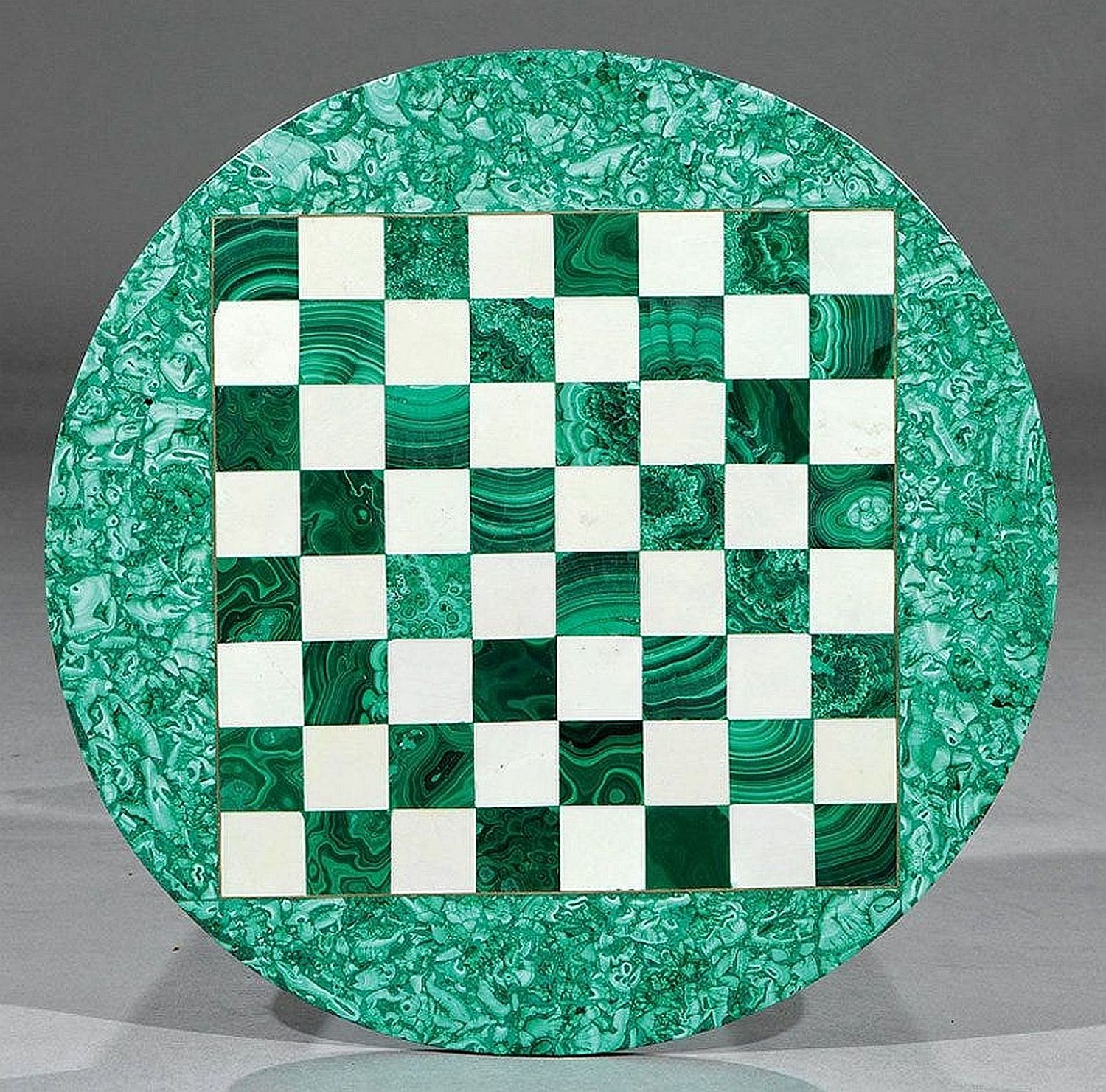 Overhead view of a continental malachite games table, which sold for $70,000 plus the buyer’s premium in 2016. Image courtesy of Neal Auction Company and LiveAuctioneers

Though malachite is beautiful on its own, it is also sympathetic with other luxurious materials. Russian vases, jewel caskets, dresser boxes, and candelabras often feature opulent gold, silver, bronze, or gemstone decorative details. In addition, malachite clocks, inkwells, and desk sets were often mounted with ormolu, one of the most flamboyant decorative accents of the 19th century. 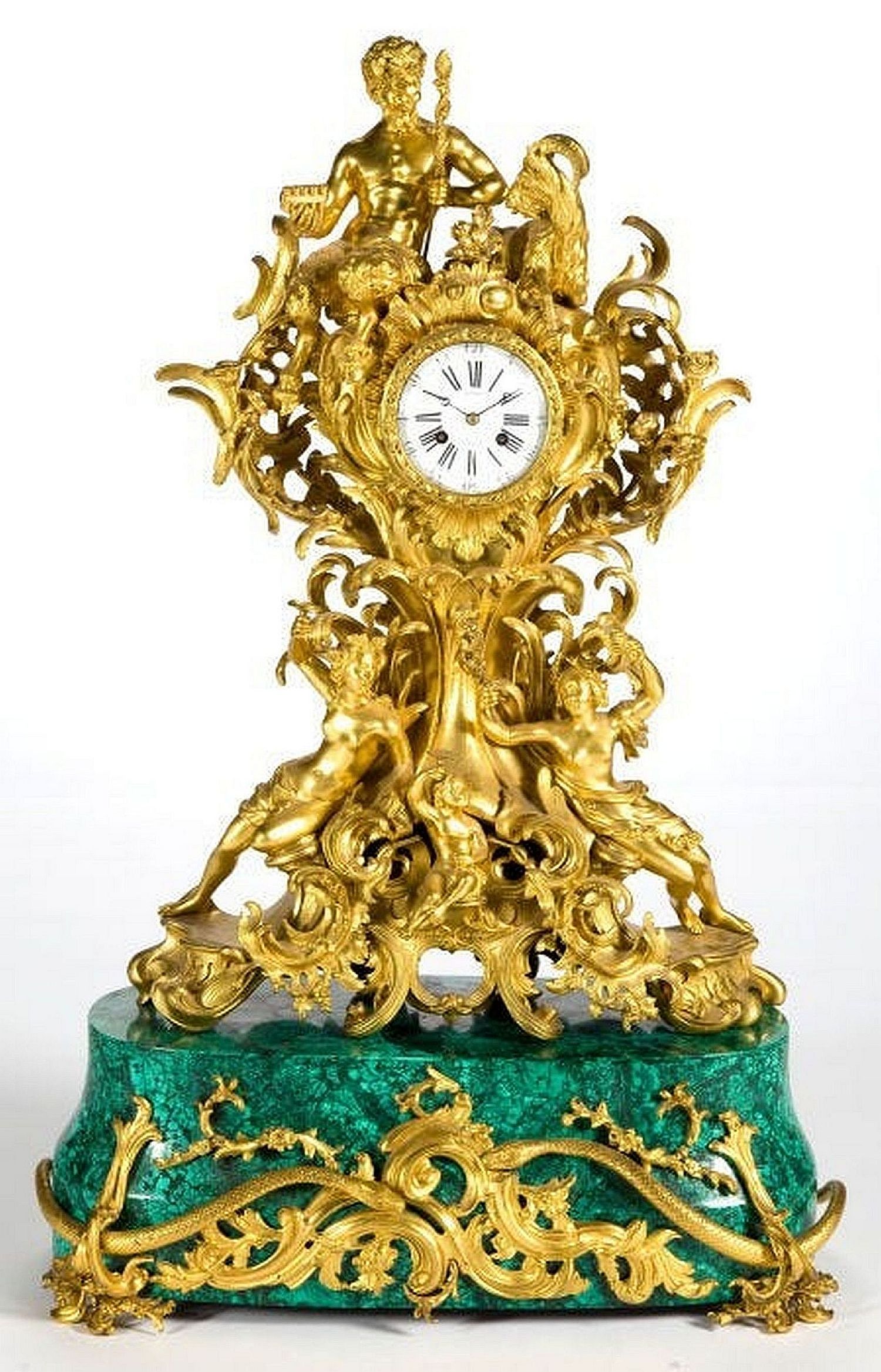 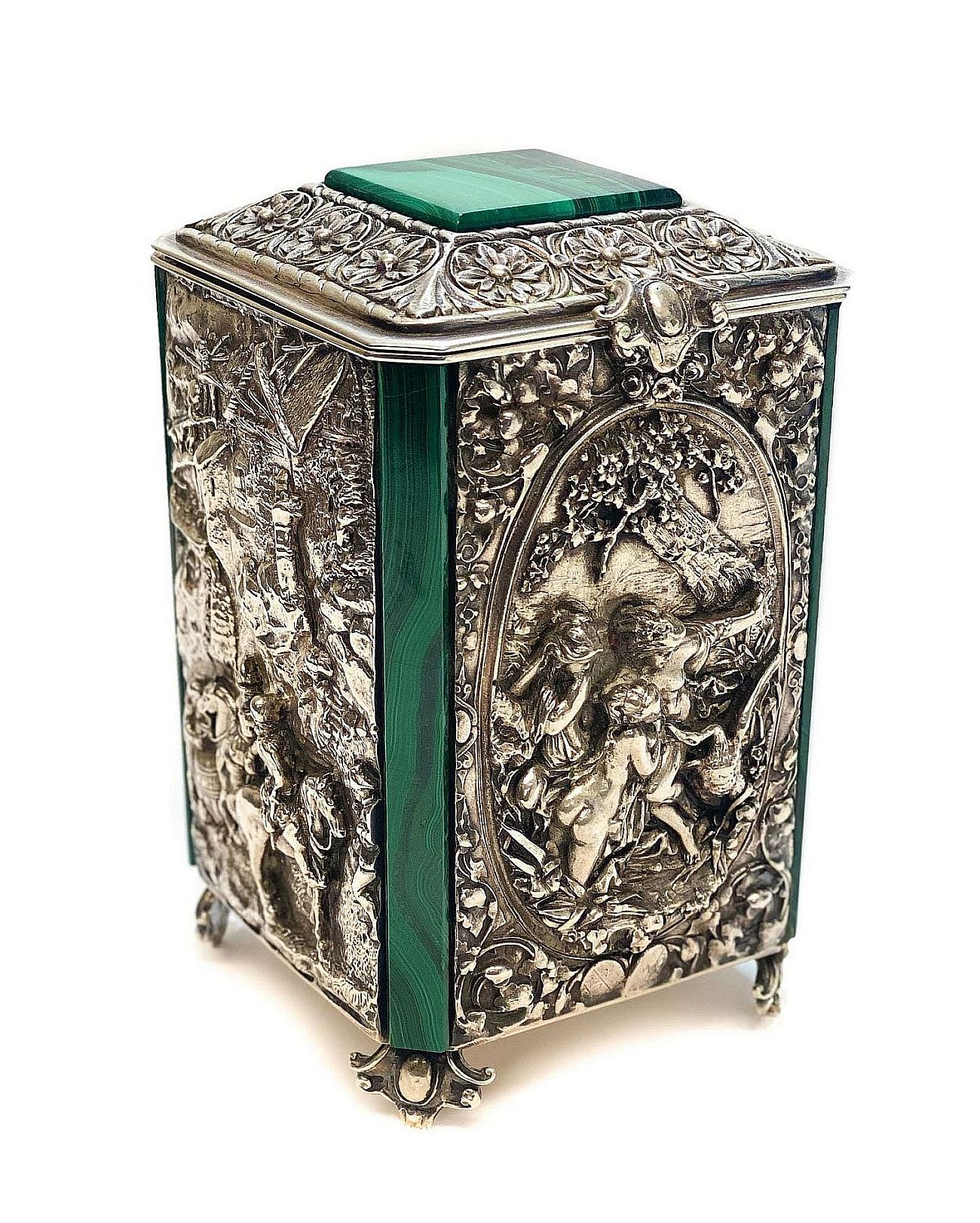 19th-century silver and malachite tea caddy, which sold for $2,300 plus the buyer’s premium in 2020.
Image courtesy of Taylor & Harris and LiveAuctioneers

“Malachite has long been a symbol of prestige and wealth,” explained Goforth. “The mineral was so prized in the 19th century that Russian papers of the time wrote, ‘To afford a big piece wrought in malachite is synonymous to owning diamonds.’” 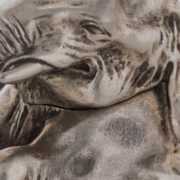 Stock and bond certificates: the value is in the story
No swords required: fight for Viking treasures online, May 12