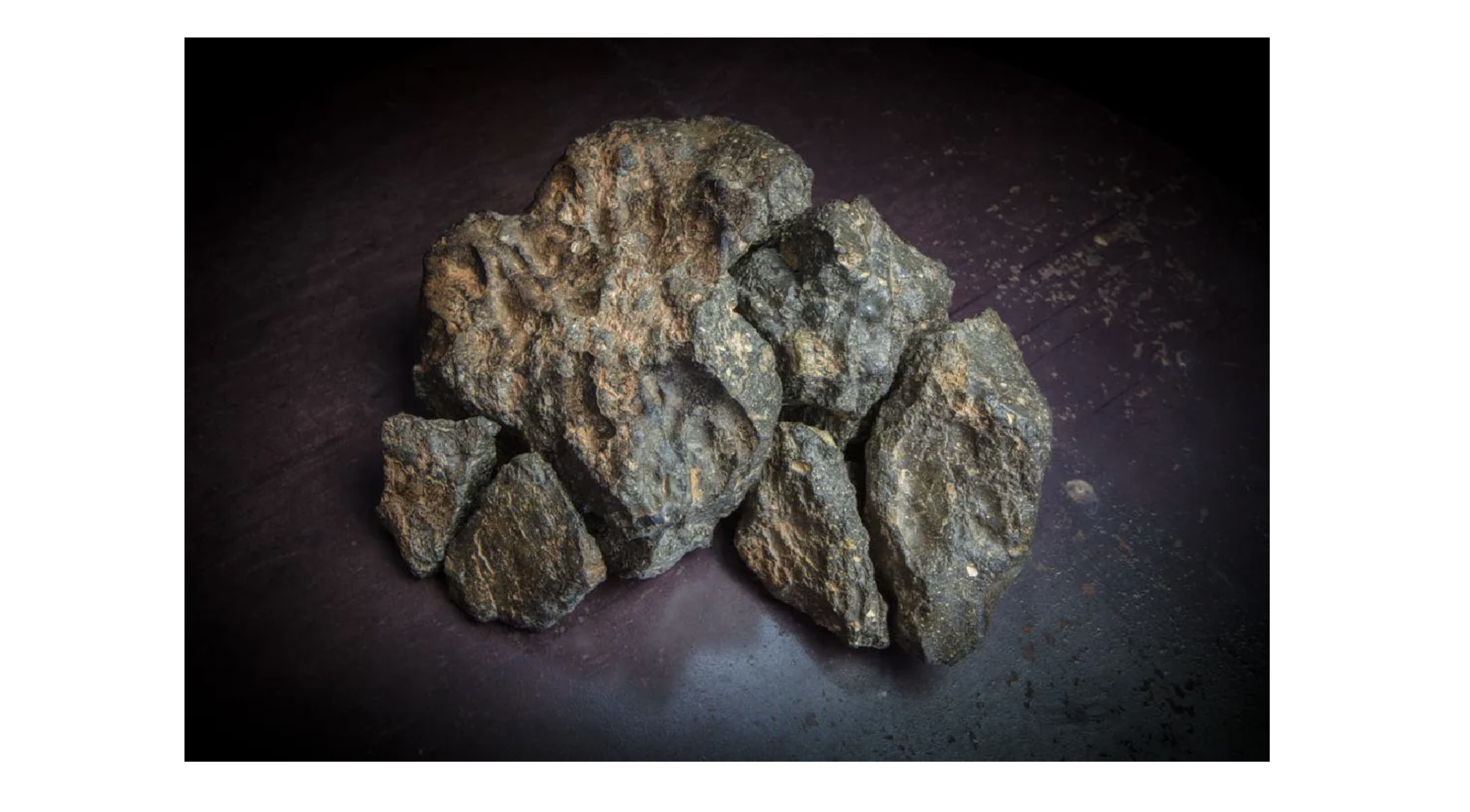 A lunar meteorite dubbed The Moon Puzzle because it consists of six pieces that fit to create a whole weighing slightly more than 12 pounds achieved $500,000 plus the buyer’s premium in October 2018. Image courtesy of RR Auction and LiveAuctioneers.

Comets, eclipses and other cosmic phenomena visible to the naked eye are awe-inspiring, but meteorites are in a class of their own. The name of these extraterrestrial rocks reflects their down-to-earth nature, in that only those that reach the surface of the Earth are called meteorites; those that burn up in the atmosphere remain meteors. 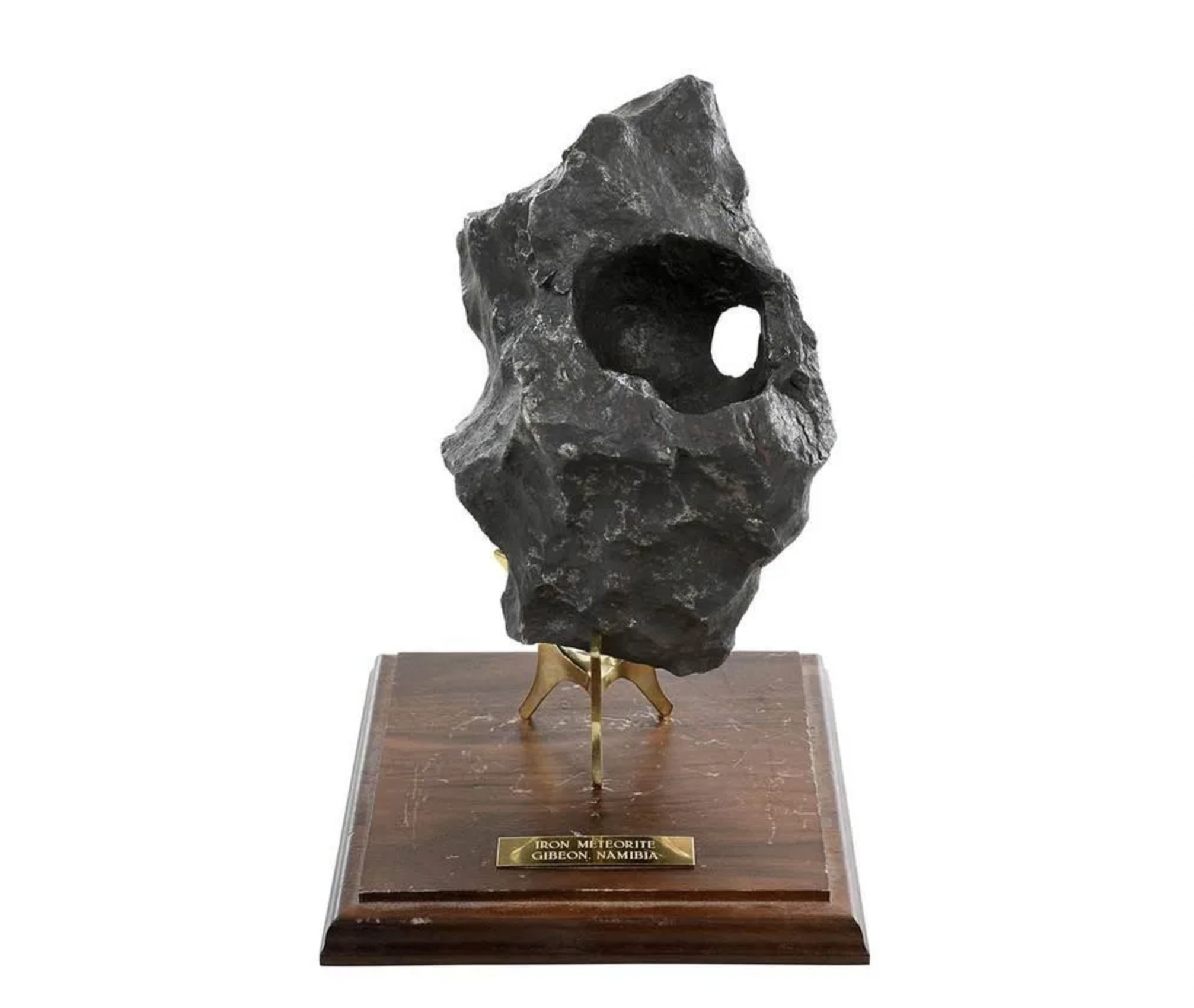 A Gibeon nickel-iron meteorite, part of a fall that took place in Namibia that was discovered in 1836, sold for $13,000 plus the buyer’s premium in February 2020. Image courtesy of Brunk Auctions and LiveAuctioneers

The fascination with meteorites predates written history. Up until recently, it was difficult to confirm a rock was in fact a meteorite, simply because most have unremarkable appearances that give no hint of their out-of-this-world origins. Improvements in technology have made confirmation easier, and commercial travel has made it easier for meteorite-hunters to reach far-flung locations where meteorite falls have occurred. 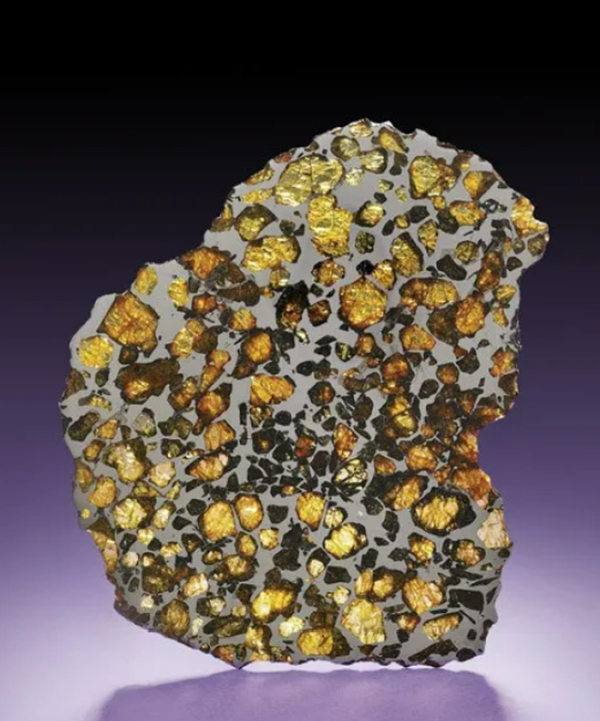 A slice of an Imilac pallasite from northern Chile, featuring gemmy olivine crystals in a silver matrix, made $5,000 plus the buyer’s premium in May 2012. Image courtesy of I.M. Chait Gallery/Auctioneers and LiveAuctioneers

Some meteorites discovered during private expeditions enter museums and research collections, but many more are acquired by collectors. Due to their extreme rarity, however, most meteorites available on the open market are fragments or slices of larger masses. 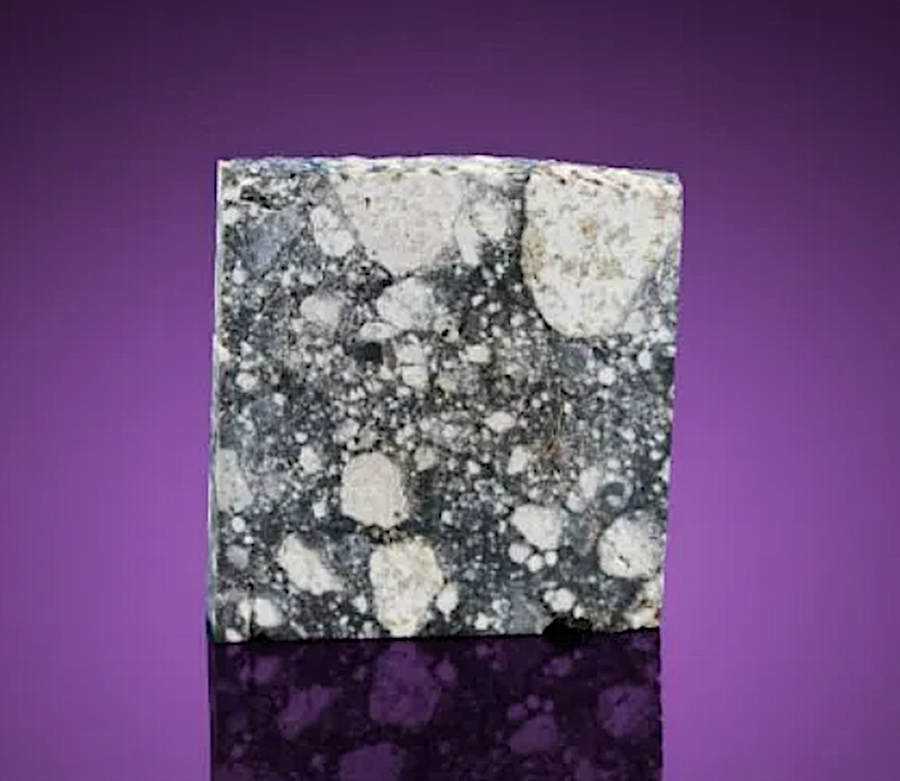 This partial slice of breccia from the largest lunar meteorite, found in Morocco, earned $7,000 plus the buyer’s premium in October 2012. Image courtesy of Heritage Auctions and LiveAuctioneers

Stony meteorites, age-old igneous-like silicate rock aggregations, are the most common form of meteorite. They originate from non-melted and melted asteroids in the Asteroid Belt, an area between Jupiter and Mars that experts believe to be the remains of an ancient solar system. A number of younger stony meteorites come not from asteroids, but rather from the moon. Lunar meteorites are among the most coveted and sought after. Even vanishingly tiny, unexciting-looking examples can command strong prices. Most lunar meteorites were created when asteroids pummeled the lunar surface. Others are breccias, stones made of rock fragments, glass shards or glass spherules that fused on impact. 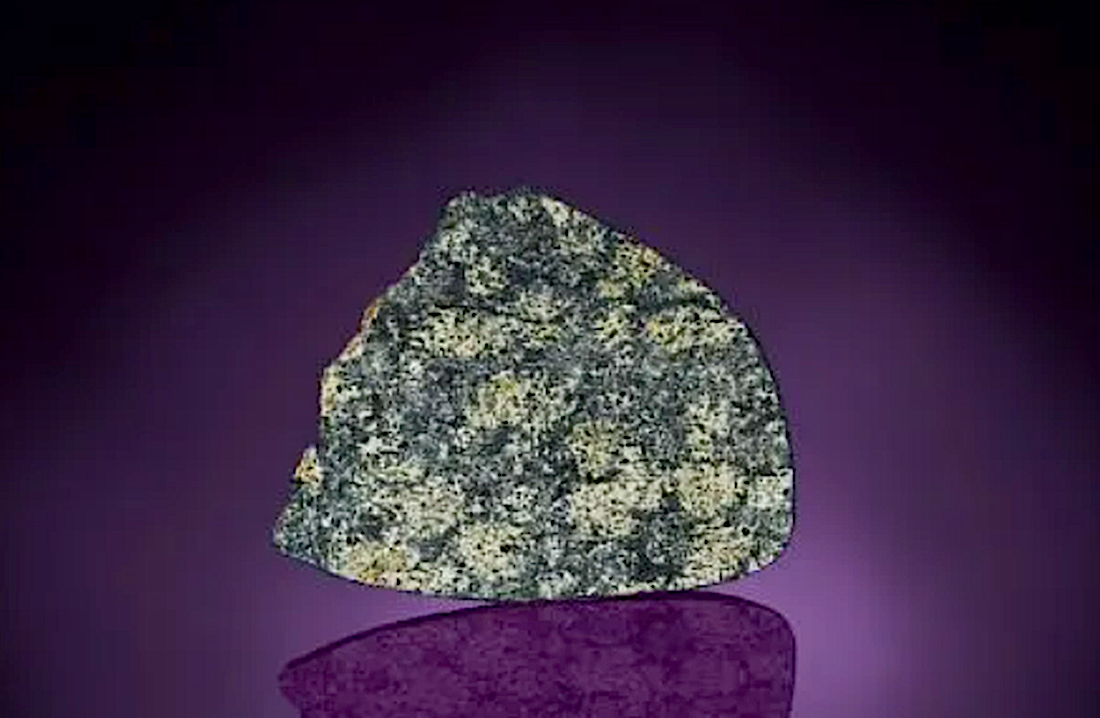 A Martian meteorite recovered from the Sahara Desert near Morocco realized $15,000 plus the buyer’s premium in October 2012. Image courtesy of Heritage Auctions and LiveAuctioneers

The only meteorites that categorically rival lunar specimens for popularity and high bids at auction are also a type of stony meteorite from a nearby planet: Mars. Martian meteorites have unusually young crystalline structures (dating from 180 million to two billion years ago) and can contain water-bearing minerals and organic compounds that some believe might have helped give rise to life on earth. The prospect of owning a piece of another planet, however small the piece might be, inspires collectors to strain their budgets and battle ferociously to win such specimens at auction. 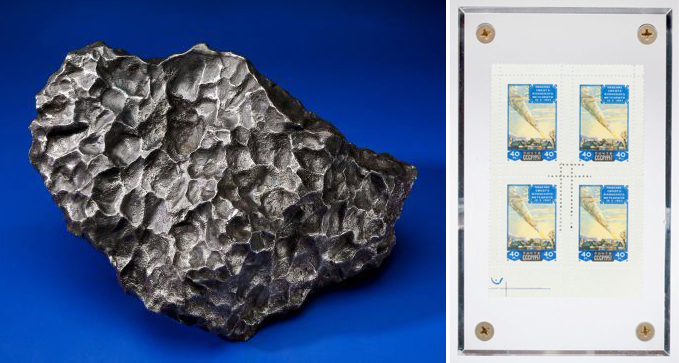 The surface of this Sikhote-Alin iron meteorite was shaped by the atmosphere as it fell to Earth. Offered with Soviet limited-edition commemorative stamps, it realized $18,500 plus the buyer’s premium in October 2012. Image courtesy of Heritage Auctions and LiveAuctioneers

Also of note are iron-nickel meteorites, which originate in the cores of melted asteroids. They are have caused earth-shattering impacts and are scarcer than stony meteorites. On the morning of February 12, 1947, a massive meteoritic fireball – brighter than the sun and the largest ever known – rocketed over the Sikhote Alin mountains of eastern Siberia. It was traveling at a speed of 10 to 20 miles a second and had a temperature in excess of 10,000 degrees when it hit the Earth’s surface and exploded into more than 60 tons of metallic meteorites. In addition to producing sonic booms, uprooting trees, and shattering windows over a large area, the fragments and rocks created nearly 200 separate impact craters. Because the fall was spectacular and also relatively well documented, all serious meteorite collectors seek a fine example of a Sikhote Alin.

Recovered near Seymchan in Russia in 1967, this pallasite was fashioned into a sphere to spotlight its abundant olivine crystals. It sold for $13,000 plus the buyer’s premium in October 2012. Image courtesy of Heritage Auctions and LiveAuctioneers.

A third type, stony-iron meteorites, contain equal amounts of silicate rocks and nickel-iron metal. They form within or upon melted asteroids. A subgroup that demands mention are pallasites – cohesive masses studded with pale green peridot-like olivine silicate crystals in metal matrices. These beauties, unsurprisingly favored by collectors, have been found from Alaska to Antarctica. (It should be noted that the pallasites shown here didn’t arrive on Earth looking this pretty. Just as rough stones are pulled from mines and cut and polished into diamonds, rough meteorites with heat-scorched exteriors are cut and polished into pallasites.) 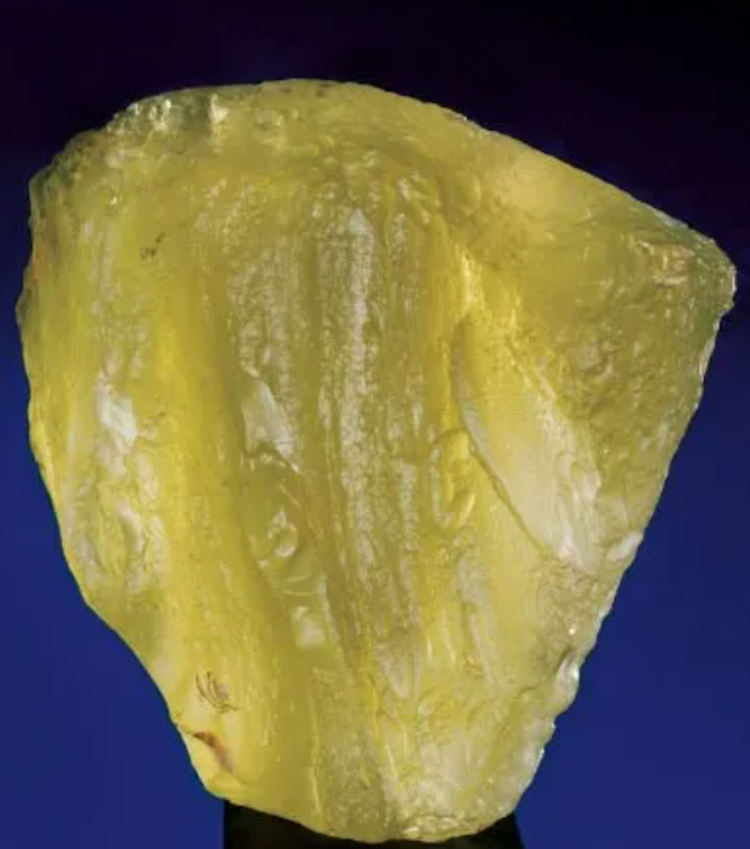 A ribbed, scalloped piece of Libyan desert glass, found in the Sahara and weighing more than four pounds, sold for $4,750 plus the buyer’s premium in June 2010. Image courtesy Heritage Auctions and LiveAuctioneers

Still another form of meteorite came to light in 1922, when archaeologist Howard Carter unsealed the tomb of the Egyptian Pharaoh Tutankhamun and discovered a mysterious glassy greenish-yellow carved gemstone on King Tut’s breastplate. A decade later, similar pieces were found across the Libyan Desert, and they are now colloquially known as Libyan desert glass. Although the origin of the stones remains uncertain, geologists think they appeared millions of years ago when a massive, blazing-hot meteorite struck, liquifying the sands and hurling debris into the upper atmosphere. The afflicted pieces returned to earth as hardened, yellowish droplets of natural glass – meteorite byproducts known as tektites. Moldavite tektites, which are found across modern-day Germany and the Czech Republic, appear translucent or mossy green. Others found in southeast Asia, Australia and North America range in color from yellow-gray or gray to brown and black. 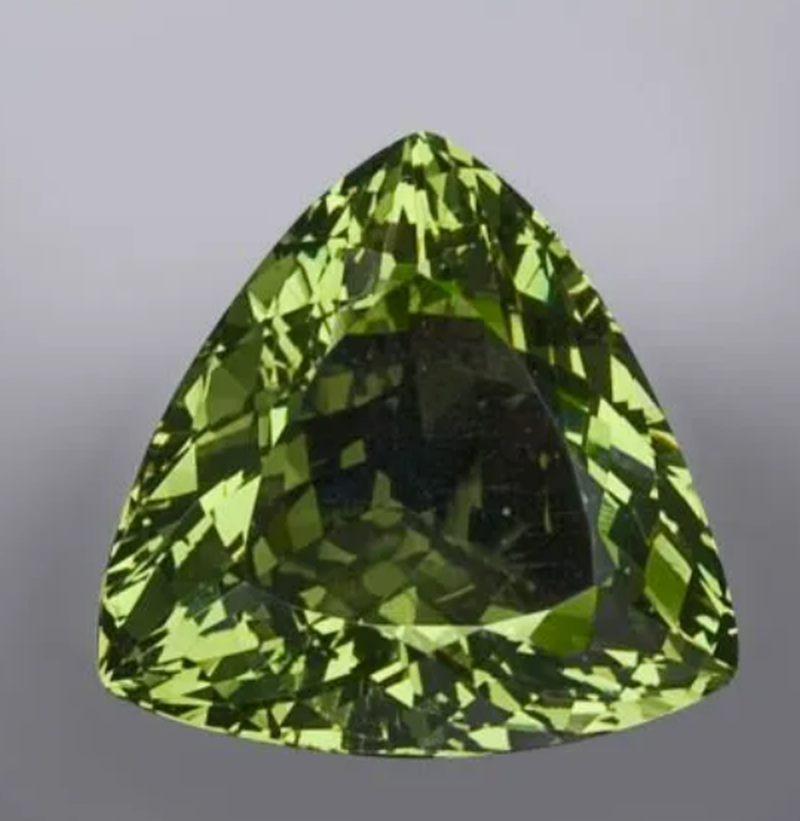 This faceted Moldavite crystal, a tektite discovered in the Czech Republic, was auctioned for $1,900 plus the buyer’s premium in October 2012. Image courtesy of Heritage Auctions and LiveAuctioneers

Whatever their source, meteorites take their names not from the people who found them but rather from a prominent feature of the area where they landed – bodies of water, towns, cities, whatever makes sense. Specimens from the same place receive identifying numbers or letters. Meteorites discovered in deserts, which feature few distinguishing geographical features, are given a name that reflects the general area, followed by a designated grid number. A mineralogically and texturally unique feldspathic breccia stony meteorite found in Morocco, North West Africa, is known as NWA 5000, while an exotic, coarse-grained, ultramafic igneous one found in the Sahara Desert near Morocco carries the label NWA 1950-SNC. 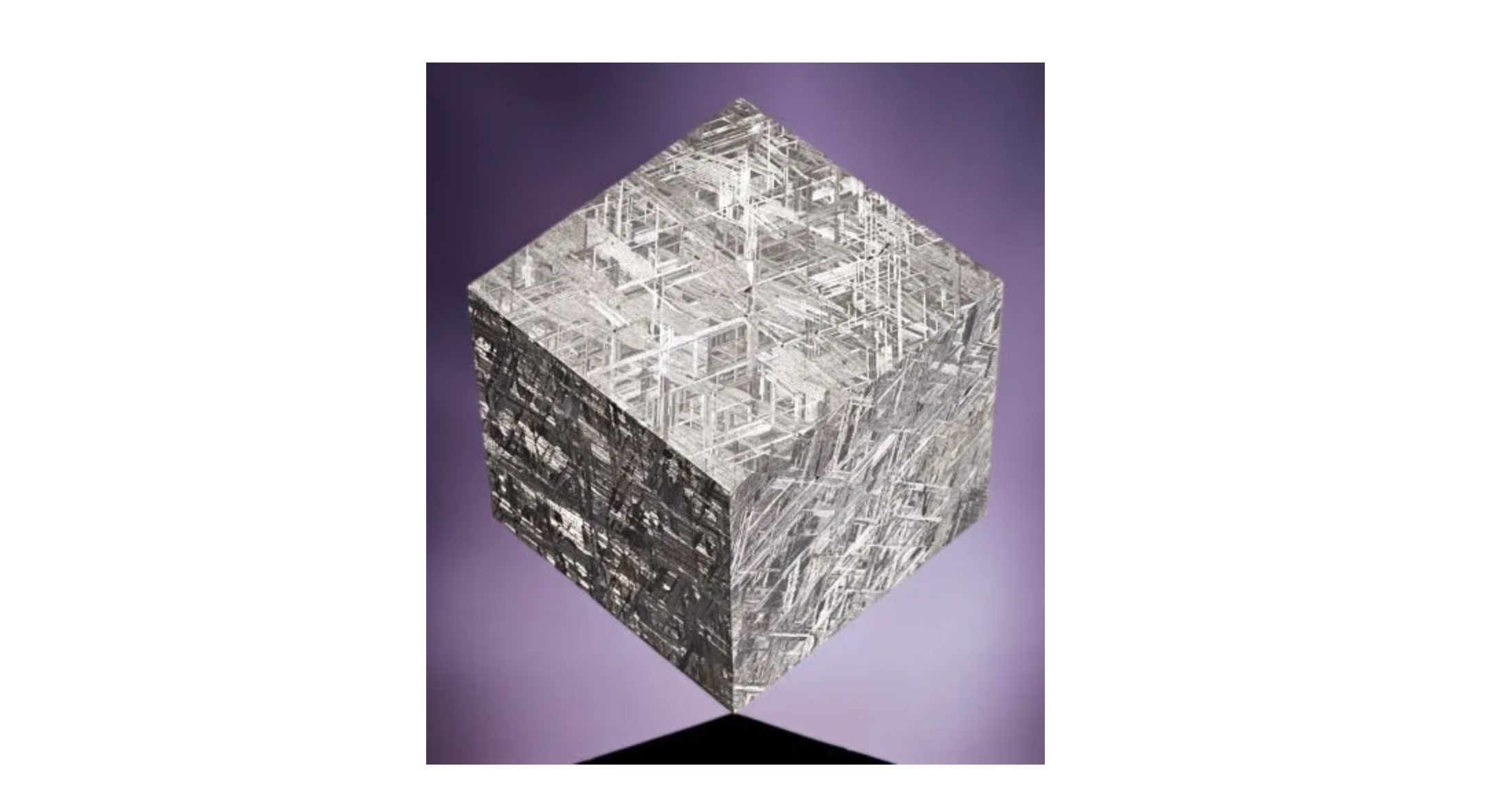 This Muonionalusta meteorite specimen, cut into a cube to show off its striking latticework, achieved $15,000 plus the buyer’s premium in October 2012. Image courtesy of Heritage Auctions and LiveAuctioneers

When Chicken Little, a character in an ageless folk tale, was struck by a tumbling acorn, she feared that the sky was falling. Had she been struck by a meteorite and carefully documented her story, she could have auctioned it for tens of thousands of dollars, easily. Humans have always thrilled to tales of rocks raining from the heavens and setting the skies ablaze. We now know so much more about the hows and the whys of meteorites, but they are no less bewitching. They unite science and romance, and they encourage us to keep scanning the skies and dreaming about worlds beyond our own.

Antique kitchen tools: cooking with style
How to measure rugs and carpets like an expert

How to photograph rugs
Scroll to top