NEW YORK – Hanukkah, known as the Festival of Lights, falls during the darkest days of the year. It commemorates the rededication of Jerusalem’s Holy Temple following second century B.C. Greek defilement. Though a bit of consecrated olive oil, enough for one day, was found to rekindle the Temple’s candelabra, it burned for eight days and nights – long enough to prepare more.

Ever since, Jews have celebrated this eight-day miracle by kindling special lights commonly known as Hanukkah menorahs or lamps. Their form is fixed – eight lights at uniform height, along with a separate “servant” light, used to kindle them. One light is lit on the first night of Hanukkah, followed by another on each subsequent night. By holiday’s end, all eight are aglow. 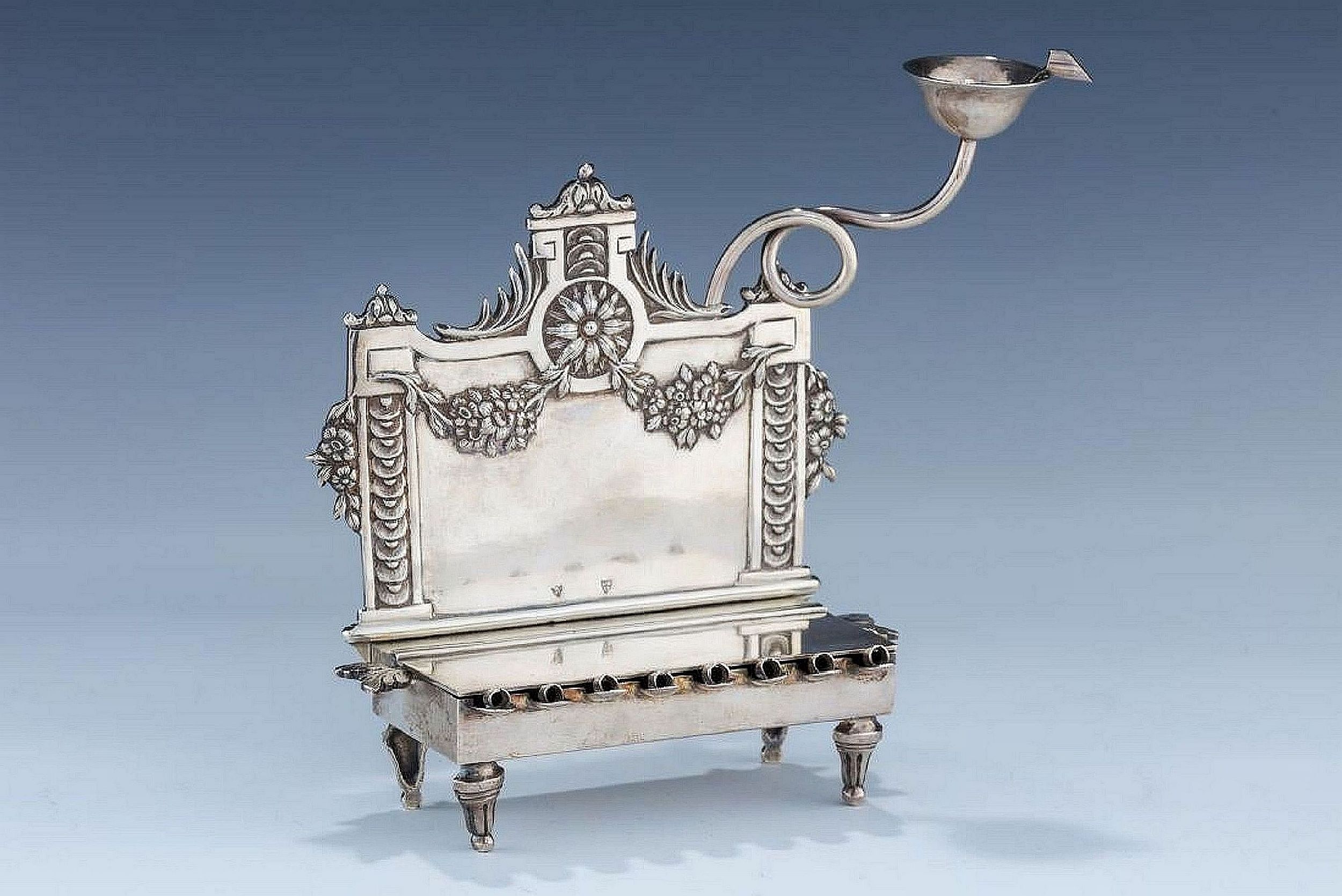 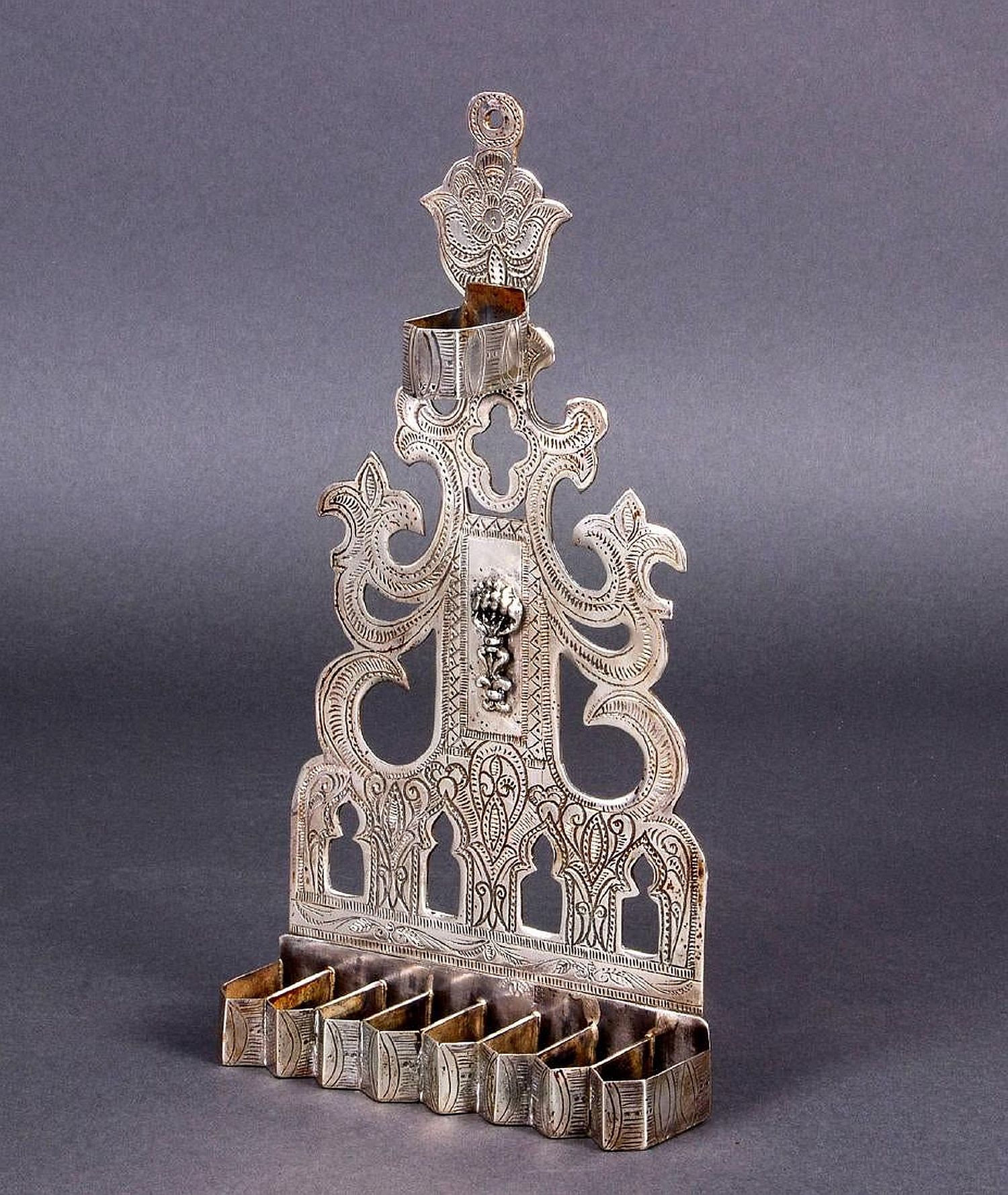 Examples reached foreign shores during the 15th century when Jews sought refuge overseas from persecution. In time, Moroccan wall-hung models incorporated Moorish-type arabesques, openwork geometric designs, stylized birds and architectural elements. Algerian and Tunisian ones, edged with tiny oil fonts, featured decorative scrolled motifs and crenelated backplates. Since North African Jews favored appearance over age, when these lamps were worn or needed repair, they were melted down and cast anew. As a result, originals are rare. 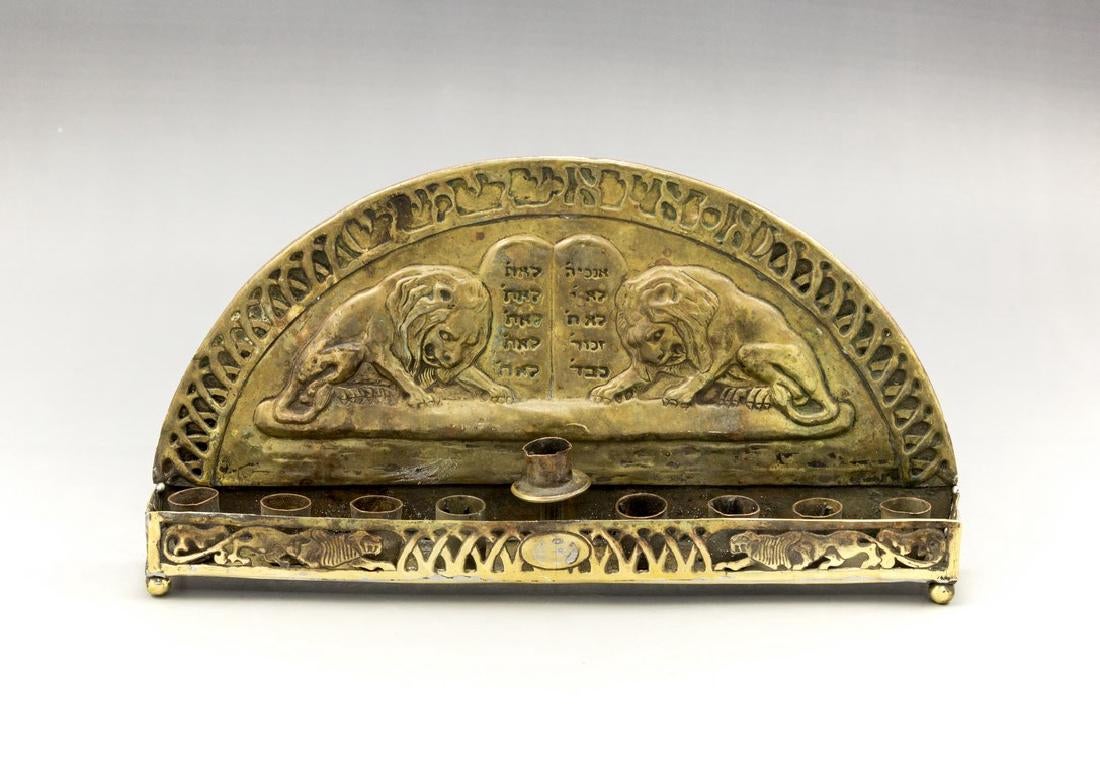 By the 19th century, however, Dutch Jews, like many others across Europe, favored convenient, candle-lit silver, gold or bronze menorahs featuring symmetrical branches supported by central shafts. Some were simply designed, evoking the stately Temple candelabra. Others featured imaginative bases, decorative spouts and intricately scrolled branches, along with oil jug, lion or Star of David finials. 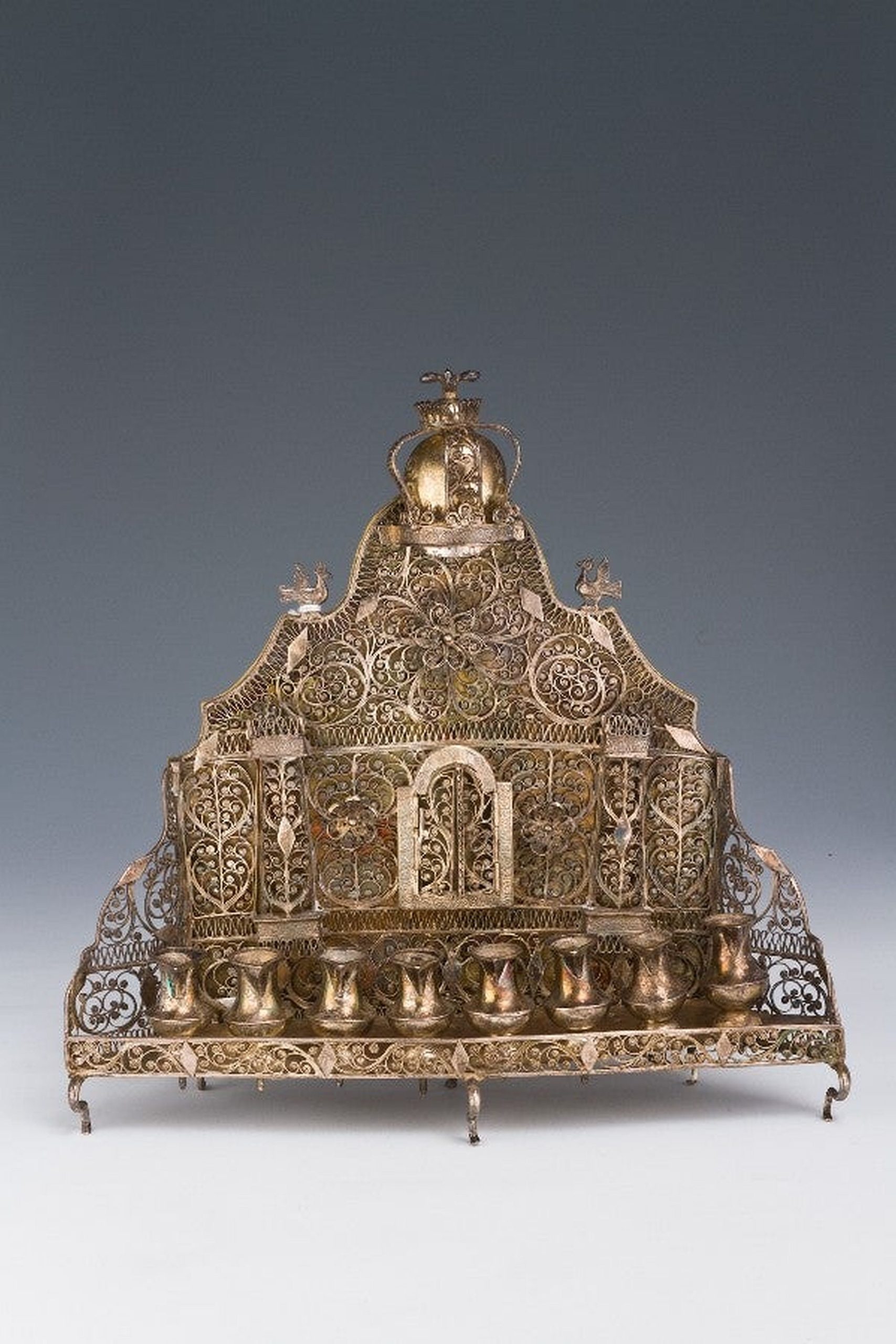 From 1909 through 1926, members of the Bezalel School in Jerusalem created appealing stamped brass and silver backplate menorahs, many depicting classic motifs or scenes of the Hanukkah story. Classic Bauhaus forms and green, patinated brass models followed. 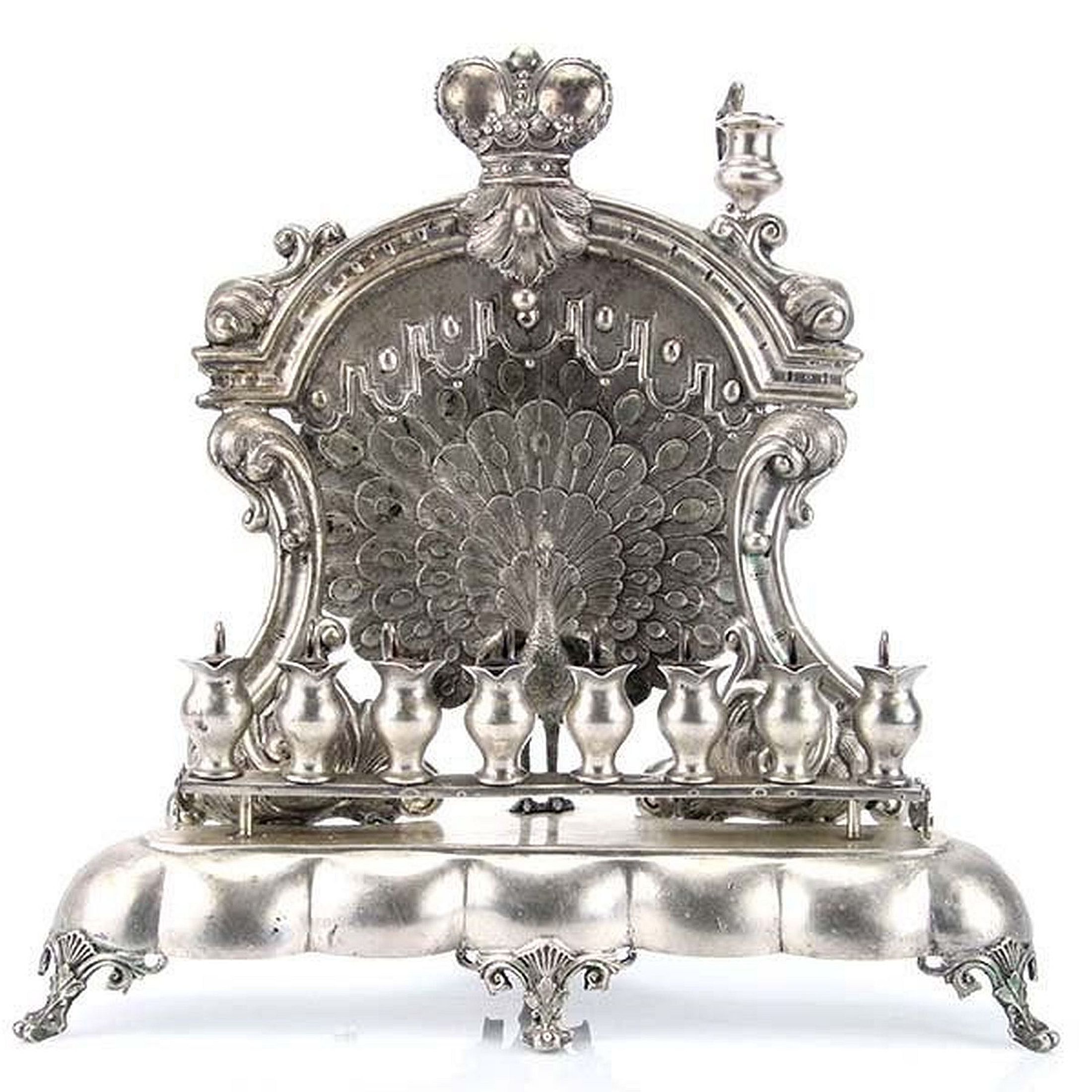 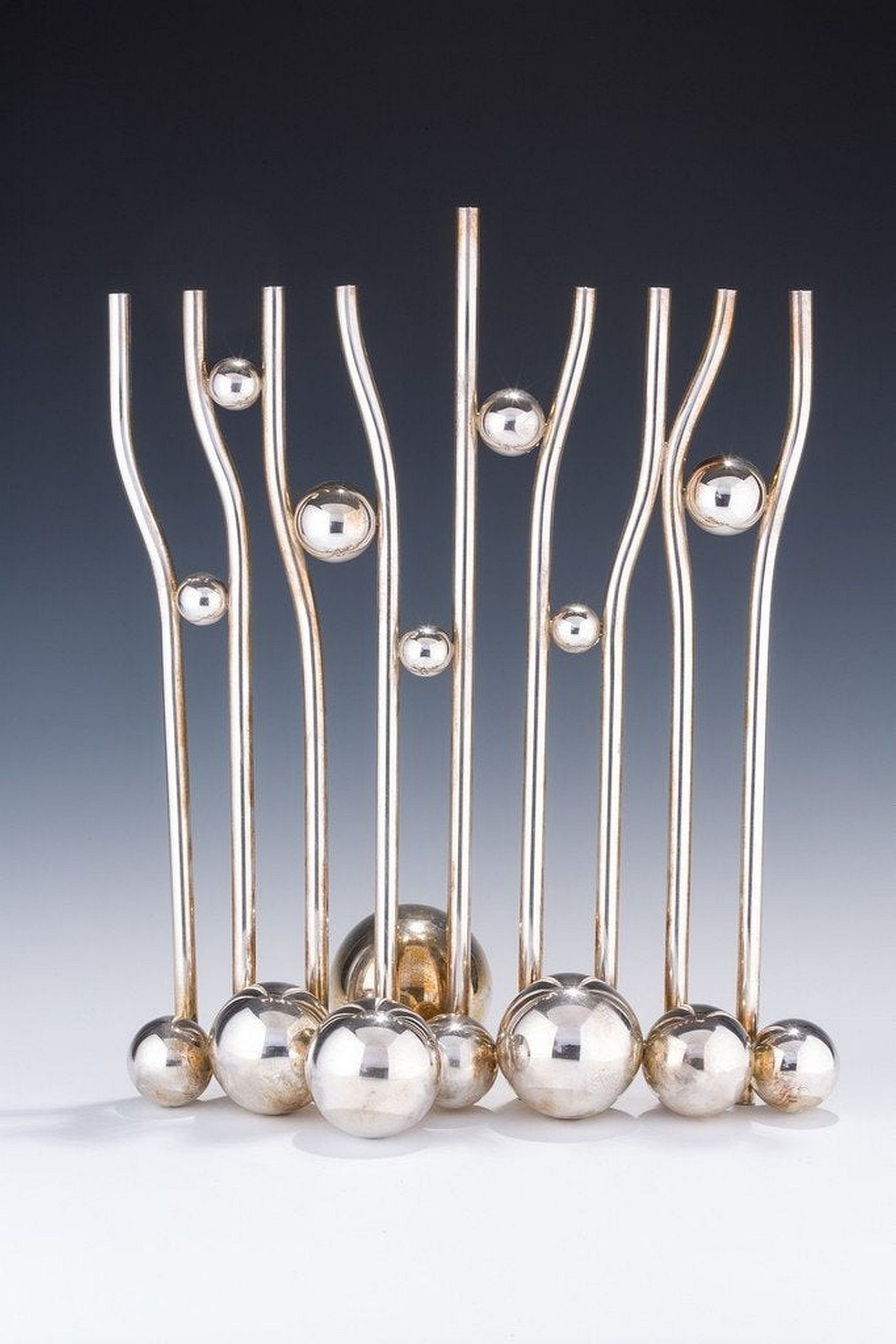 Though many celebrate Hanukkah with a single menorah, others assign a separate one to each member of their family. Seven, eight, nine menorahs with candles all aglow – that’s a sight to behold.

Many observant families, however, prefer kindling oil-fonts because they are closer to tradition, closer to the Hanukkah miracle. These are enclosed in protective glass boxes, then displayed outdoors for all to see.

Bronze figures at the fore of Jasper52 auction Dec. 16
Scroll to top