NEW YORK – Move two spaces. Roll the dice. Learn if your turn has been naughty or nice. That’s the nature of a competitive board game, especially one played during the Victorian era. And no one created Victorian board games better, then or now, than McLoughlin Brothers Inc.

There have always been competitive board games since ancient times. The earliest incomplete board game is said to be senet found in Egyptian burial sites dated as early as 3500 B.C., including that of Tutankhamun. Its rules are unclear, but it’s thought to be a personal journey from this life to the afterlife, according to Wikipedia. The Royal Game of Ur dates back to at least 2500 B.C. with other examples such as backgammon (Iraq, Syria), chess and parcheesi (India), and Go (China) from around the world during the ancient period that are still played today. 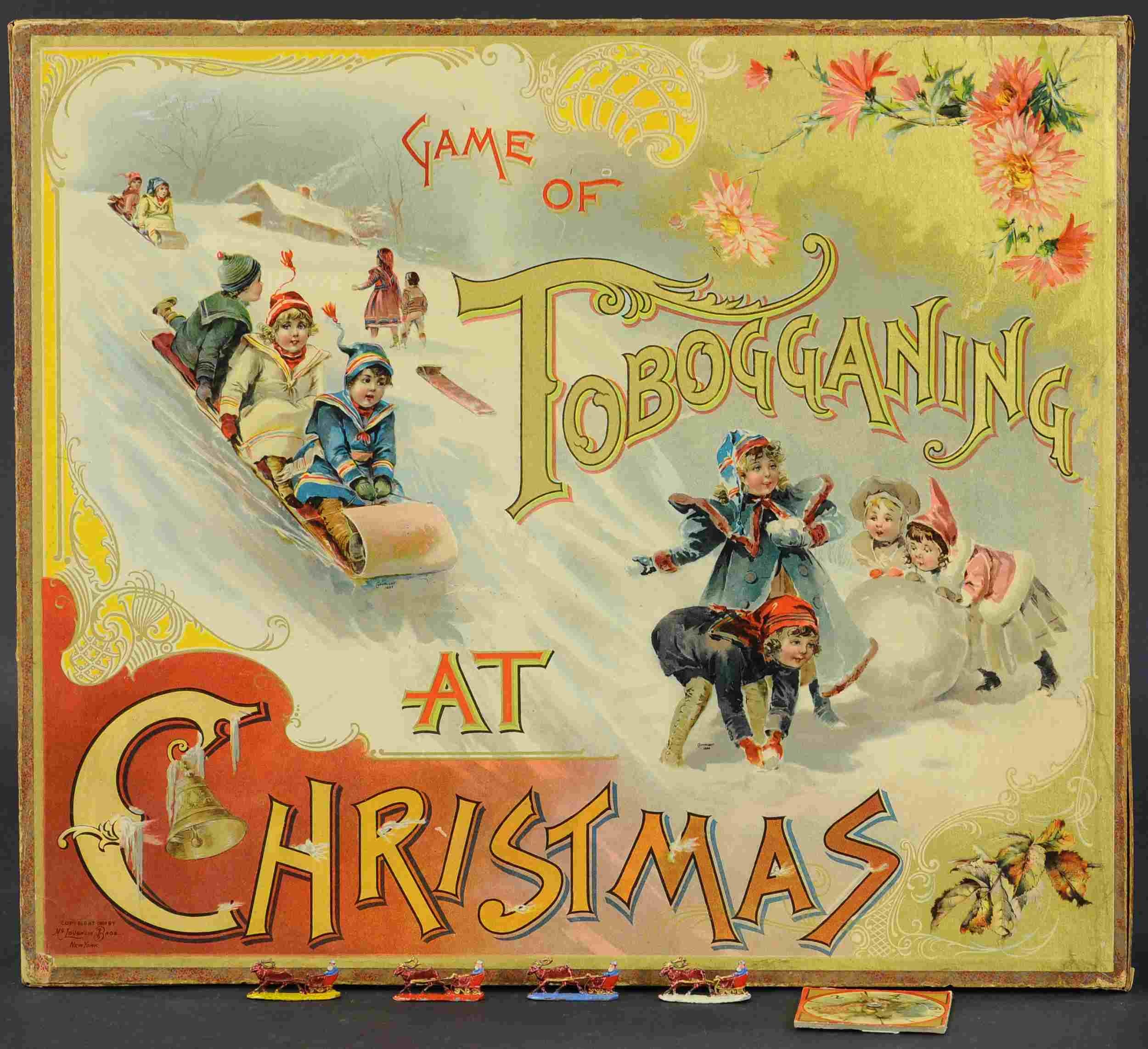 This 1899 board game shows the wonderfully colorful illustrations of children enjoying the snow in vivid colors is what makes McLoughin Bros. board games so desirable. This set recently sold for $10,000 (inclusive of a 25% buyer’s premium) complete with all its pieces. Image courtesy of Bertoia Auctions and LiveAuctioneers

Board games in Europe from the 16th century through the Victorian era centered around vice and virtue such as Goose – roll the dice, land on vice (get punished) or virtue (get rewarded). Land on ‘goose’ and you get another chance to be a saint again. The winner was the most virtuous – simple and straightforward.

Not much different than the games published in the United States, except the first one was a Traveller’s Tour Through the United States published in 1822 by bookseller F&R Lockwood in New York City, but morality games like The Mansion of Happiness (Heaven being the Mansion), published in 1843 by W. & S.B. Ives, were more the norm. Each game board had simple, two-color, hand-painted graphics with an average cost of $1.63 (about $45 today).

By the 1850s advancement in printing brought chromolithography, a process that allowed full-color printing on paper more economically feasible and much less labor intensive. One of the first companies to take advantage of this new process was the McLoughlin Bros, a New York City publishing company of children’s books, paper toys, and, most important to collectors, multicolored board games. 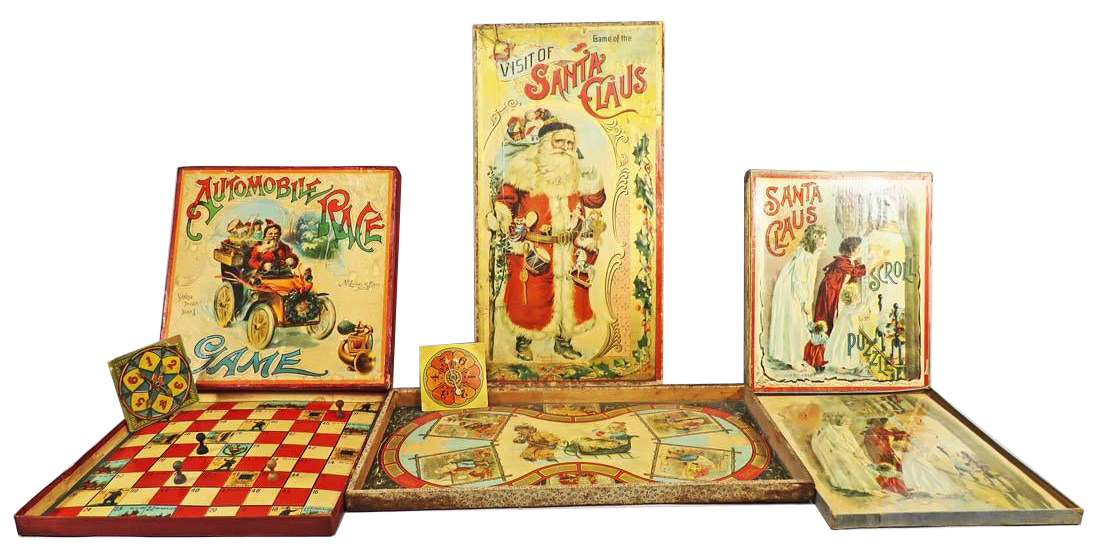 A series of three Christmas-themed McLoughin Bros. board games features an1899 Santa Claus Scroll Puzzle, a 1904 Automobile Race Game with Santa motif on cover and the Visit of Santa Claus board game that sold together for $5,182 (inclusive of a 22% buyer’s premium) in 2019. Image courtesy: Showtime Auction Services and LiveAuctioneers

What’s remarkable about the board games published by McLoughin Bros. was not that they were the first (the Mansion to Happiness was) it was the distinctive multicolor process that created the high quality of its box illustrations. Many well-known artists worked for McLoughlin Bros. creating dazzling images for each of the children’s books, card packs and board games. Ida Waugh, for example, is a well-known illustrator and portrait painter who had exhibited at the 1893 World’s Columbia Exhibition and Woodmere Museum in Philadelphia, among others. She ultimately contributed many painted illustrations to books, games and booklets along with William Bruton, Sarah Noble Ives and so many well-known illustrators of the era. Their superior pen and ink and watercolor illustrations helped set McLoughlin Bros. apart from other publishers of the era.

The sheer number of board games offered by McLoughlin Bros. is astounding and varied. There’s the Game of Catching Mice, the District Messenger Boy (one of its first), College Boat Race, The King’s Highway, The National Game of Baseball, the Game of Three Blind Mice, and so many others. By 1920, McLouglin Bros. sold out to Milton Bradley and board games were no longer produced under their name.

Luckily, we can still appreciate the wonderful art and history of McLoughlin Bros. board games and other children’s books and educational games at auction. As with other collectibles, condition is most important, but with vintage board games, particularly those from McLoughlin Bros., the graphics are just as important. Board games were meant to be played, so some wear and tear can be expected. However, the best condition reaches a higher auction value. Every small tear, rip or discoloration will matter.

Not just board games, but books by McLoughin Bros also tell the story of Christmas such as a complete set of Game of Christmas Jewel and several children books ‘Christmas Surprise,’ ‘Christmas Joys,’ ‘The Night Before Christmas and Nellie’s Christmas Eve’ that sold for $671 (inclusive of a 22% buyer’s premium) in 2016. Image courtesy of Morphy Auctions and LiveAuctioneers

Pieces matter, too. Many of the board games have more than just a board; the dice, cards, playing pieces need to be all original and intact. Even if one piece is missing, no matter how small, the value drops significantly.

The type of game usually matters as well, but with McLoughlin Bros., all board games, no matter the condition will have an interested collector. For Christmas-themed games, for example, the Game of Tobogganing at Christmas, Automobile Race Game (showing a red-suited Santa similar to Kris Kringle on the cover) and a Visit of Santa Claus shows the vivid colors and storytelling graphics on the cover. They are as special now as they were played with then.

So many collectibles were made for a certain time and place. Board games may be the exception. Even if they were created over 150 years ago, their original purpose to entertain, amaze and bring out the competitive spirit is still going strong. Vivid artwork, fanciful design and the life lessons of McLoughlin Bros board games will easily transcend the next 150 years as new generations appreciate their genius.

As Jumanji says, “A game for those, who seek to find, a way to leave their world behind.” But not too far behind. They will always live as cherished collectibles.

Meteorites: collectibles from out of the blue