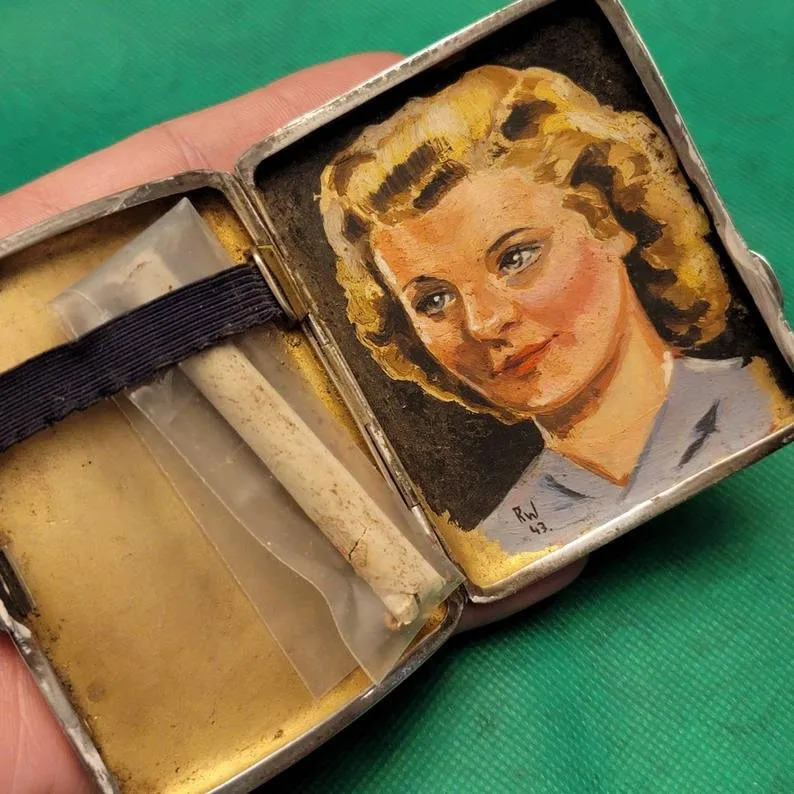 A utilitarian example of trench art is this WWII-era cigarette case with a hand-painted image of a wife or sweetheart on the inside, fashioned from a metal piece incised with the initials ‘RW 43.’ It realized $500 plus the buyer’s premium in November 2020. Image courtesy of Jasper52 and LiveAuctioneers

In every army in the world and in every era, the mantra of the soldier has been, “Hurry up and wait.” Warriors of ancient Greece and Rome, Napoleon’s troops, and soldiers from any contemporary conflict face the same basic fact: they will have more down time than fighting time. It’s just the nature of the military. While trouble might tempt those with too much downtime, some have used it to better advantage.

Writing letters home, making friends, visiting local sights, playing cards and other pursuits help to pass the time. And then there is “trench art,” created by recycling the brass detritus of war into gleaming, detailed works of art. While serving on the front lines, this pursuit has provided a calming distraction from the intensity of war. It also keeps a soldier’s hands and mind pleasantly occupied rather than fidgeting and fretting about what might soon come. Some trench art can even reveal a serviceman’s hidden talent, with some works worthy of a museum display. 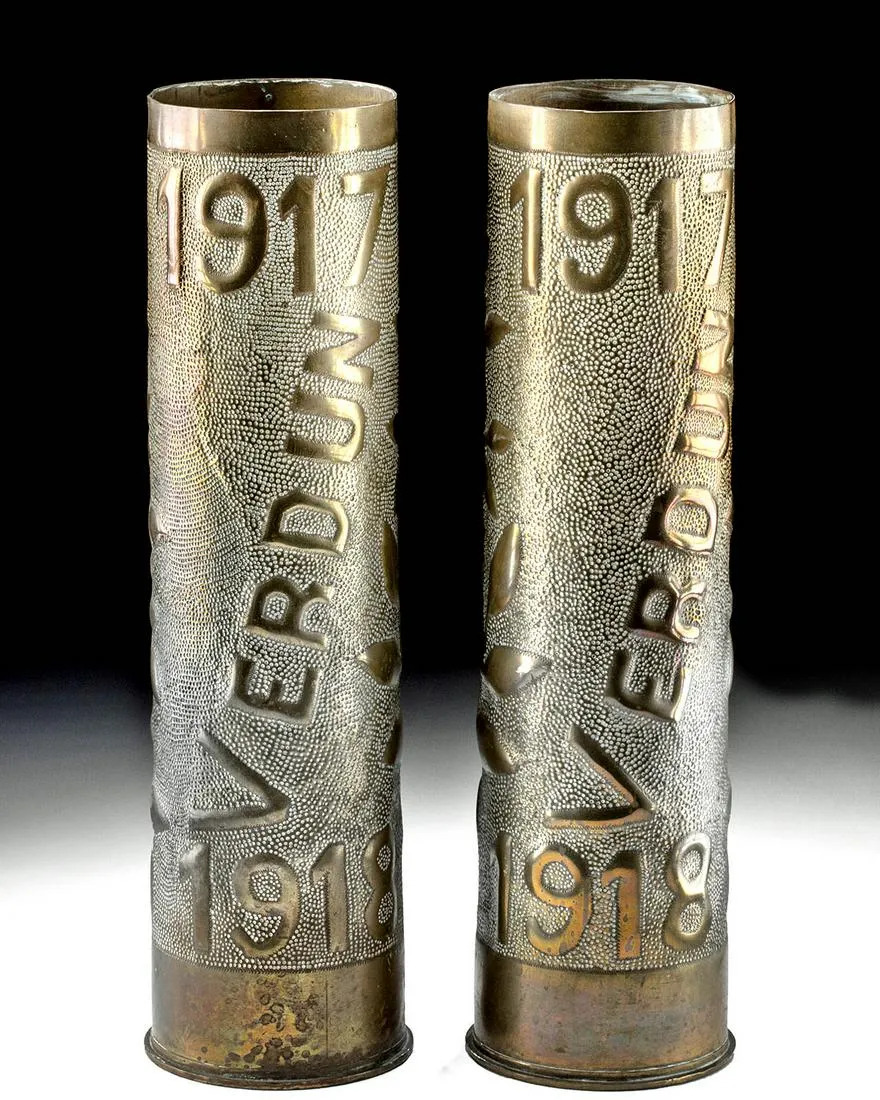 A pair of large brass artillery shells from World War I, fashioned into decorative vases that double as a remembrance of a French victory over German forces in 1916, achieved $1,000 plus the buyer’s premium in September 2020. Image courtesy of Artemis Gallery and LiveAuctioneers

Trench art is typically defined as any creation made from the waste of war. Soldiers of yesteryear, usually infantrymen, carved ammunition casings into fanciful remembrances and scenes marked with dates or personal information. Such carvings were intended as souvenirs that soldiers carried home, while other examples of trench art were abandoned in the trenches or on the battlefield. 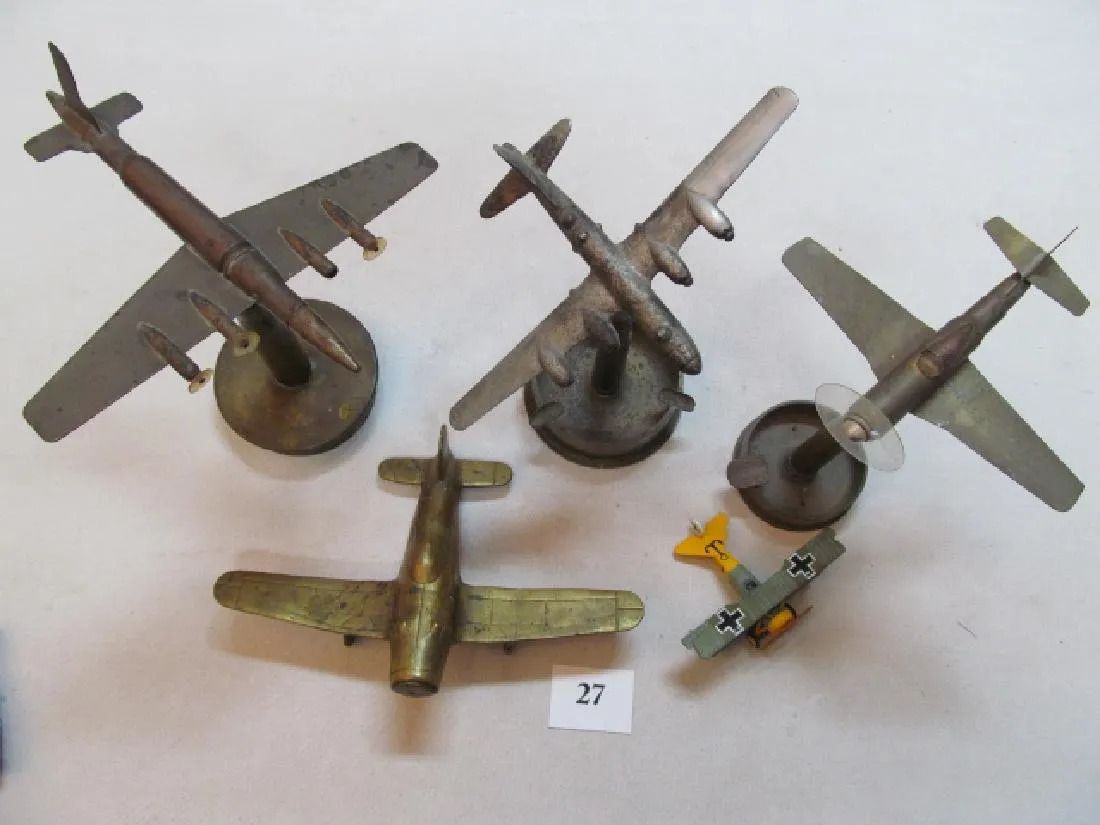 Airplane-themed trench art was a particular favorite of World War II airmen. This set of four pieces attained $475 plus the buyer’s premium in February 2019. Image courtesy of Old Barn Auction and LiveAuctioneers

During World War I, the most prevalent period for trench art, simple tools such as a pocketknife, chisel, punch and hammer were used to fashion rings, bracelets, knives, letter openers, ashtrays and necklaces. National coins of France, Belgium and other Allied nations were painstakingly reworked into charming scenes, unit crests, battle flags and personal works of art. 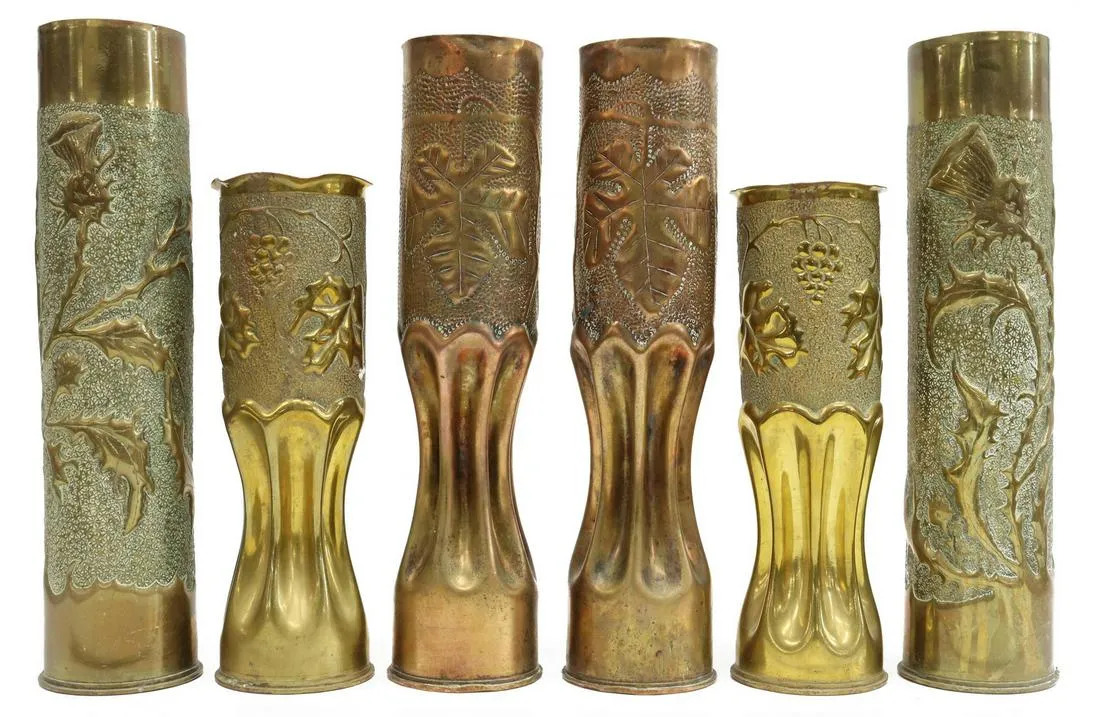 These spent brass artillery shell vases could be commercially-made souvenirs sold to the Allied Forces after the Armistice was signed in November 1918, as they sport elaborate fluting and other details that regular soldiers could not create. Together this group earned $1,100 plus the buyer’s premium in March 2021. Image courtesy of Austin Auction Gallery and LiveAuctioneers

World War II delivered much more sophisticated equipment to soldiers, including the hacksaw, tin snips, drill bits, gasoline torches, files and soldering irons. These tools yielded more highly detailed, higher-quality pieces such as candlesticks, statues, drinking cups, umbrella stands and even furniture. Zippo lighters were carved with personal designs, and a popular pursuit of airmen was making bracelets from the aluminum of Japanese airplanes shot down in the Pacific Theater. Coconuts were painted and sent back home through the postal service as exotic keepsakes for friends or family members. 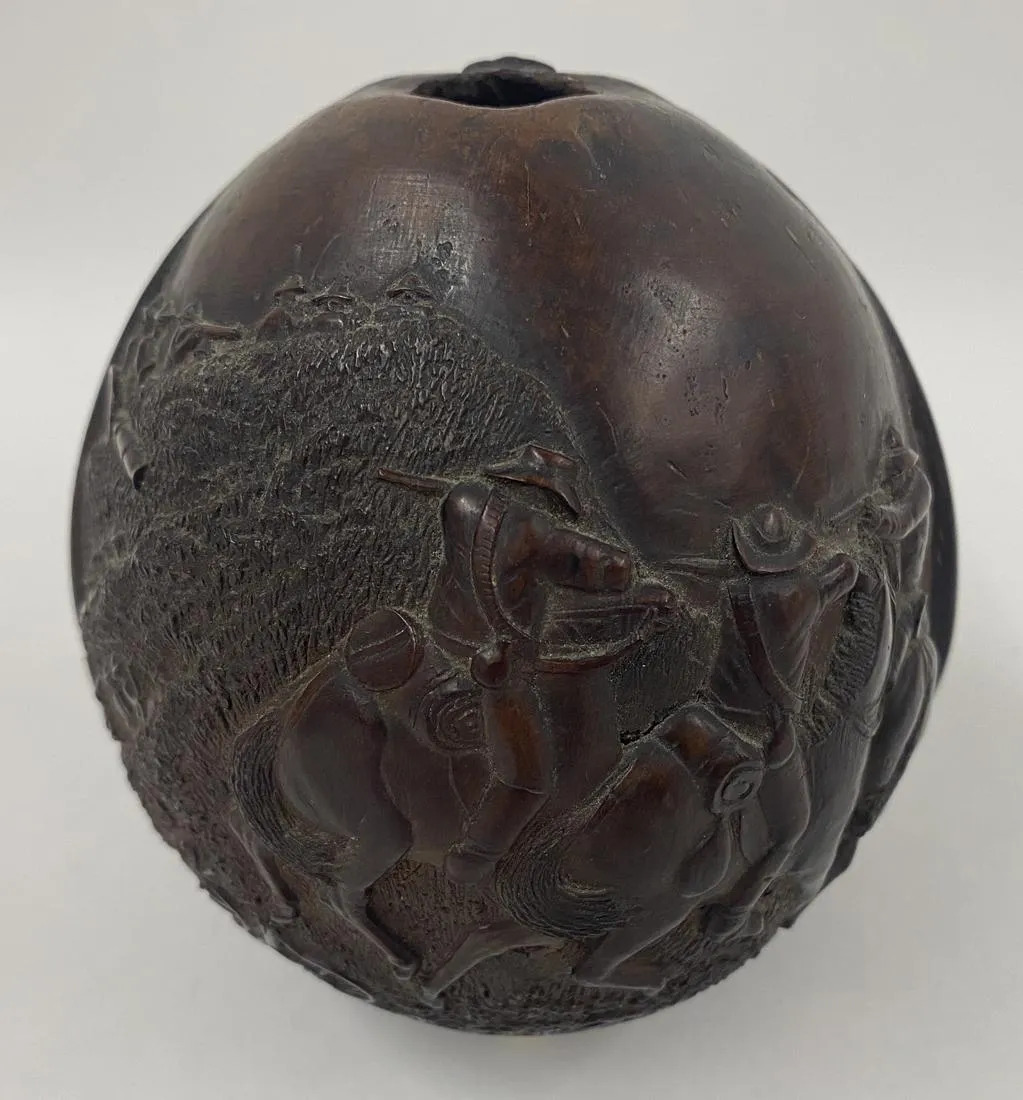 This coconut, carved during the Boer War by POW JP Peterson and dated 1902, depicts the British firing on entrenched Boer soldiers with the Orange Free State and Transvaal coat of arms. It realized $650 plus the buyer’s premium in March 2020. Image courtesy of CRN Auctions, Inc. and LiveAuctioneers

Collectors who are interested in trench art should understand that it comes in four different, distinct varieties: works by soldiers; works by prisoners of war (POWs), those made by civilians and, finally, commercially made artwork. 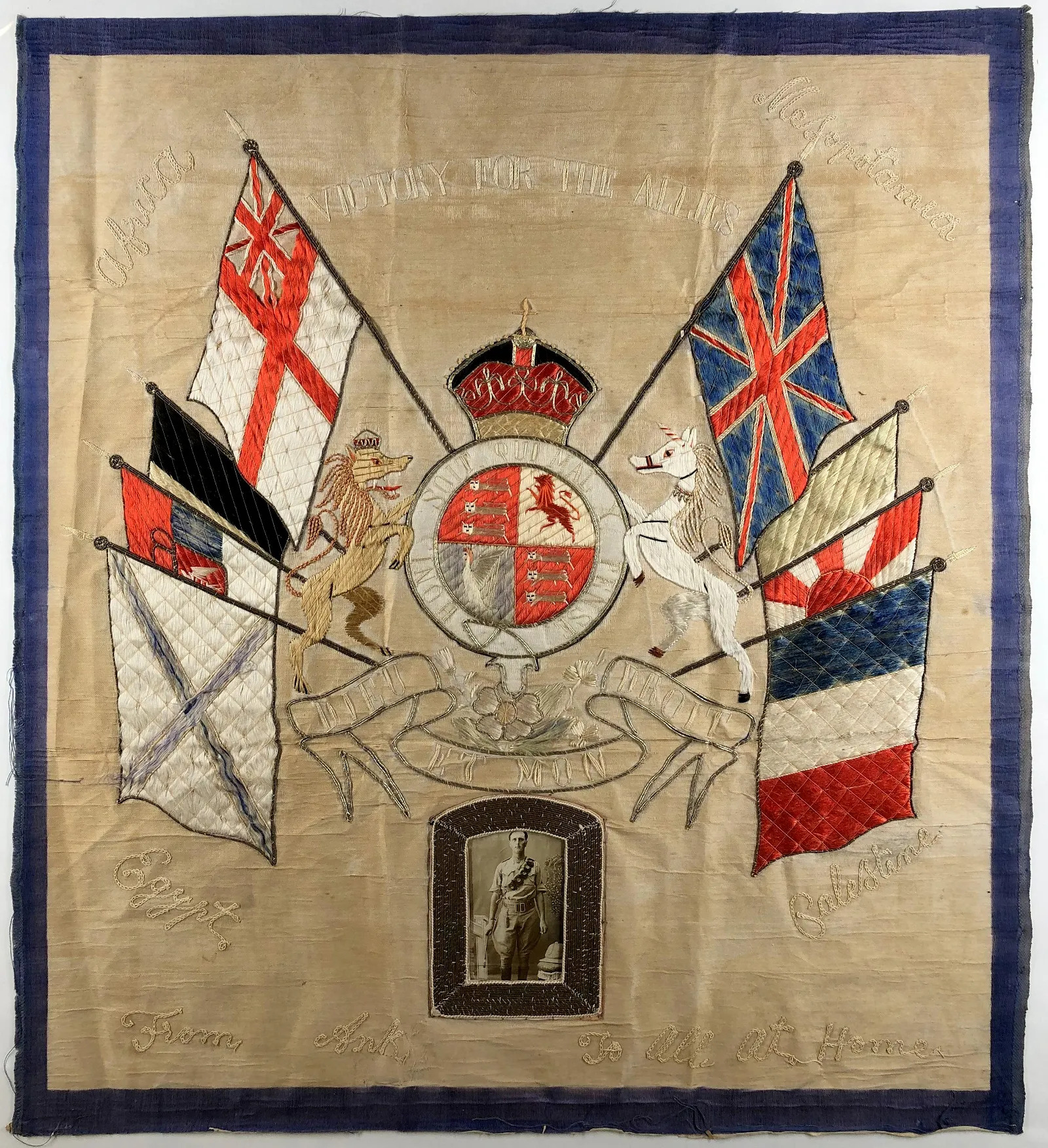 To keep wounded men busy while they convalesced in military hospitals, arts and crafts projects were encouraged, particularly embroidering with yarn and silk. This circa-1917 example, featuring the crest of the British Crown and flags of the Allied nations of Great Britain, France, Japan and Russia, apparently including a photo of the soldier who made it and sent it home to his family, sold for $120 plus the buyer’s premium in August 2021. Image courtesy of Levy Auction House and LiveAuctioneers

Trench art created by soldiers is the most sought-after at auction. The time spent waiting in foxholes or frontline trenches can exact a physical and mental toll, especially when it seems endless. With only the tools available to them – usually a pocketknife – a soldier would carve a scene on whatever bit of metal was at hand. Convalescing in a military hospital allowed soldiers the time to devote to arts and crafts projects that rendered simple wooden items with yarn used for embroidery. A Napoleonic prisoner-of-war ship-form snuff box carved from a coquilla nut achieved $15,000 plus the buyer’s premium in February 2022. Image courtesy of Eldred’s and LiveAuctioneers

Trench art by captured soldiers, known as prisoners of war or POWs, is different from that of other soldiers because it could serve as currency, traded for soap, food or “luxuries” such as blankets or shoes. Trench art created by those in confinement continues to be prized at auction, especially as these items were not just mementos but also satisfied the artist’s personal needs.

Civilians who lived in and near battlefields during World War I launched their own cottage industries by making their version of trench art from reclaimed ordnance and selling the items to visitors and even to the soldiers themselves. Well before Grandma Moses embraced the technique, these enterprising people directly embroidered postcards with images of scenery from conflict sites or a razed town as well as unit crests, national flags of the Allies, and personalized messages. Even flour sacks sent to the Western Front by the Allies that identified the country of origin were turned into souvenir items.

Local businesses sprang up to reclaim and recycle spent brass, aluminum and lead from discarded ordnance and assorted military castoffs, transforming them into detailed renderings of battles with historic dates. Ships were broken up and converted into barrels, large picture frames, furniture and household items, and some pieces featured a brass plaque identifying the ship that provided the raw materials. Civilian trench art of this type is particularly prized at auction. However, if the design of a piece includes exuberant flourishes, fluting and painstaking carving, it’s likely the product of a commercial firm that used stencils and acid washes – things not available to the common footsoldier. 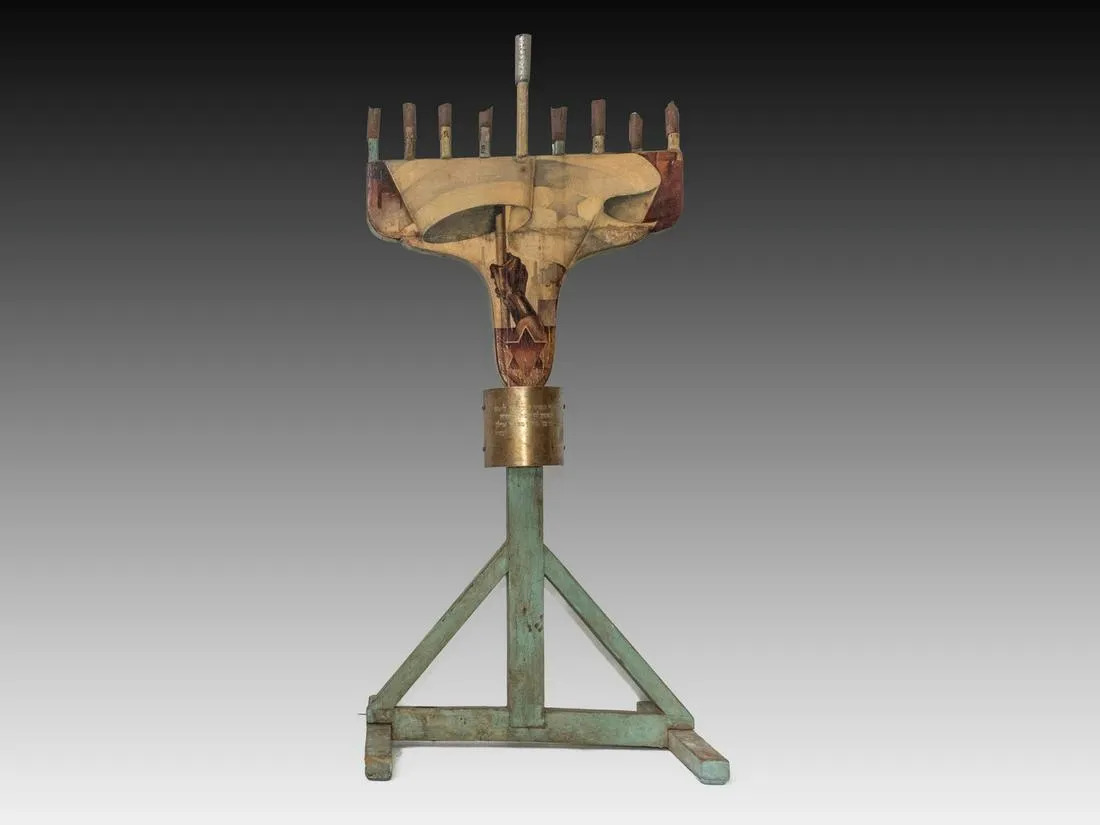 A standout piece of trench art is this wood and metal menorah featuring spent ammunition and painted with a hand holding a Flag of Israel, a Star of David and a view of Jerusalem. It was given to Israeli Prime Minister and Defense Minister David Ben-Gurion in 1948, around the time of the Israeli War for Independence. The menorah earned $20,000 plus the buyer’s premium in December 2019. Image courtesy of Ishtar Auctions, Ltd and LiveAuctioneers

Each work of trench art tells a story of battles won or lost, and what soldiers were thinking about while far from home, such as family, children, wives and sweethearts. Some works reflect the artists’ level of morale as they mulled the consequences of fighting, moving them to emboss items with religious imagery. Other works of trench art were functional, mundane items, such as a matchbox to keep matches dry, better eating utensils and more stylish uniform buttons. 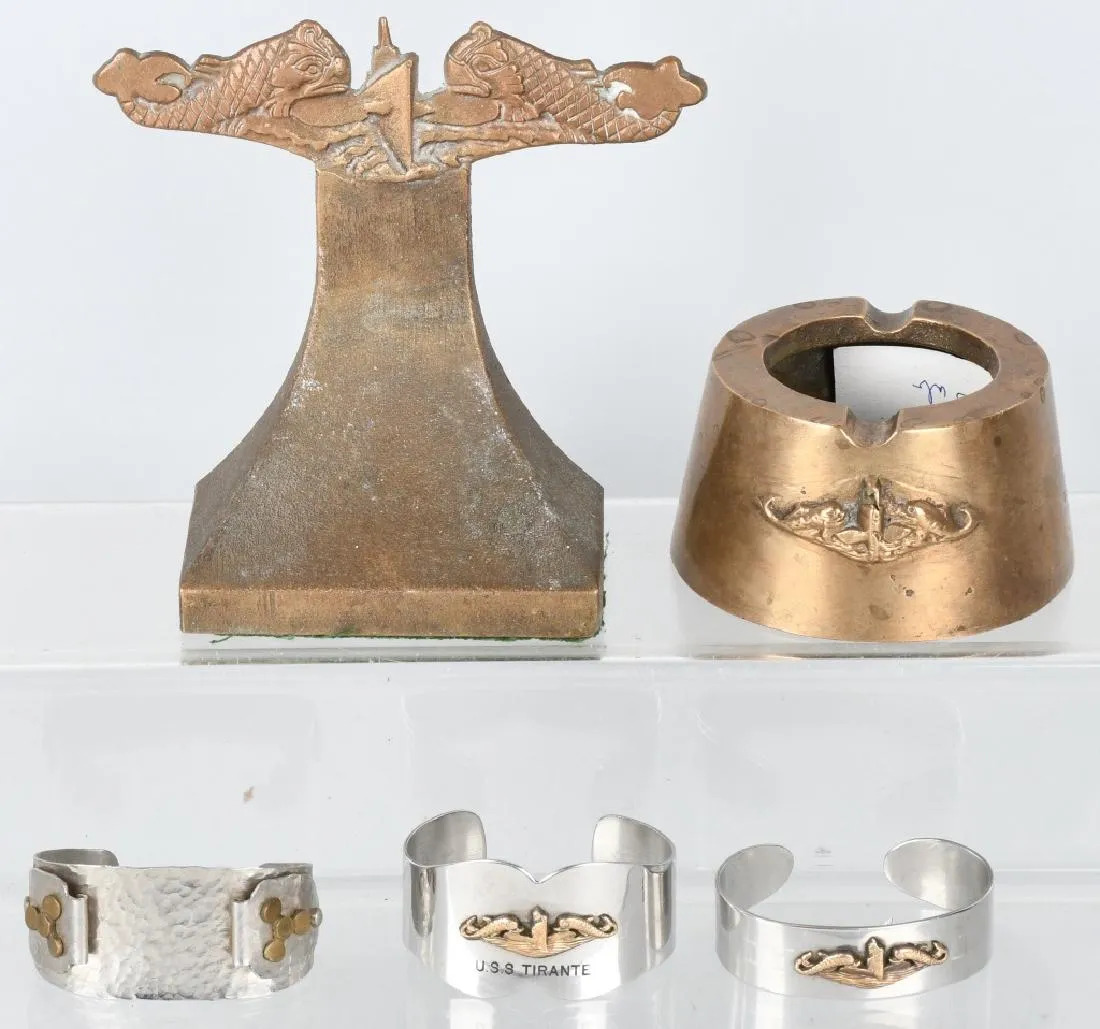 Sailors also created trench art, as evidenced by this lot consisting of a paperweight, an ashtray and three aluminum bracelets, including one stamped to the USS Tirante and including the submariner dolphin-head insignia. Together they sold for $240 plus the buyer’s premium in January 2018. Image courtesy of Milestone Auctions and LiveAuctioneers

While trench art has been most closely associated with the Western Front during World War I, such works were made millennia before that conflagration started and continue to the present day. Objects fashioned from the waste of war, regardless of where or when, qualify as trench art.

You can learn more about trench art from the National Air and Space Museum in Washington, D.C., the National Army Museum in New Zealand and the Imperial War Museum in London. All have large exhibits dedicated to World War I trench art, with definitive displays for other conflicts as well.

A trench-art mandolin made by 305th Ammunition Train bugler Albert J. Brailer, showing the places he visited during WWI on the face and body of the instrument, brought $900 plus the buyer’s premium in January 2019. Image courtesy of Milestone Auctions and LiveAuctioneers

At the 11th hour of the 11th day of the 11th month of 1918, The Great War, which we now call World War I, officially ended. Its trench art kept alive all the hopes, the sacrifices, the hardships, the memories, the camaraderie and the unseen heroism of its often unknown artists, just as it does for the warriors who came before and after.