The American Flag is an object of admiration and empowerment. Songs have been written about it, poems reference it, it’s the subject of artwork and countless designs, and it is at the core of the patriotism felt by many generations of Americans. The American flag also symbolizes the character of a nation and its people.

That’s a lot for a piece of textile to live up to, but the American Flag has done so for 250 years, since its design first began to take shape. To examine the changes in American Flag design over the centuries and the appeal it holds to collectors, we turned to foremost flag expert Jeff R. Bridgman, principal of Jeff R. Bridgman Antiques, Inc. www.jeffbridgman.com.

As Bridgman explained in his researched writing The Evolution of the Design of the American National Flag, the Sons of Liberty played an integral role in the foundation of the flag and its design. This came about in 1767 as the group worked to muster support within the colonies against British tyranny. History references the adoption, by the Sons of Liberty, of a flag featuring nine vertical stripes, alternating between white and red, as a symbol of the nine colonies that opposed the Stamp Act of 1765. Reports also point to the presence of flags featuring variations of the stripes, and the color selection, with the occasional inclusion of blue, in the design of flags seen during the early years of the Revolutionary War, according to Bridgman’s research. 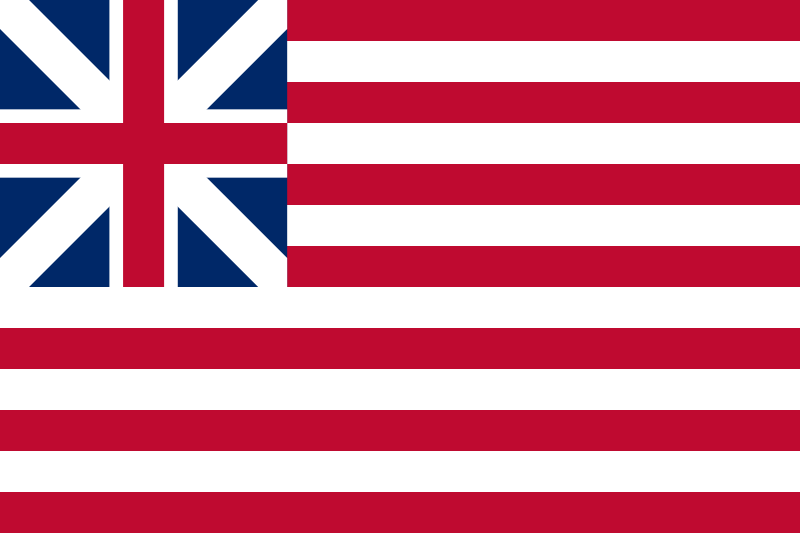 Depiction of the Grand Union Flag, aka Continental Colors, thirteen horizontal stripes in alternating red and white, with the British Union Jack in its canton. Artwork by Hoshie.

An example of this is the “Grand Union” flag, largely accepted as the first national flag of the United States. This flag featured 13 stripes of alternating red and white, with the image of the British Union Flag positioned in its canton, at the top left corner. This flag would remain the generally accepted flag of the United States until June 14, 1777, when Flag Day was established and the recognizable “Stars & Stripes” version stitched by Betsy Ross was officially adopted. The resolution of the Second Continental Congress accepted on June 14, 1777 states: “Resolved, That the flag of the United States be made of thirteen stripes, alternate red and white; that the union be thirteen stars, white in a blue field, representing a new Constellation.”

Bridgman spoke of two other moments in the history of the flag’s design as being especially significant.

“The next would be 1795, when the flag was officially updated to include two more stars and two more stripes. In 1818 it was updated again, adding five more stars, but the stripe count was returned to the original thirteen. At the same time, it was decided that the flag would be updated annually, on July 4th, if any new states were added over the course of the ‘flag year,’” he said.

“For the first 135 years of our flag’s existence, it actually had no official star pattern, no official shades of red and blue, and no official proportions. There was also no official number of points that the stars had to have. All of this was decreed in 1912 via an Executive Order of President William Howard Taft.”

Hand-sewn cotton 34-star Civil War flag, canton incorporating the crosses of St. Andrew and St. George, possibly made with Southern sympathies, 1861-63. The stars are double-appliqued – sewn to both sides. Measures 48¾ by 68½ inches. Price: $26,500, available from www.jeffbridgman.com.

Bridgman went on to say, “Those were the big years. Also important was 1861. Before this date, private citizens seldom flew the Stars and Stripes. The onset of the Civil War and some related events changed all that.”

Flag Fact: The current version of the American Flag, featuring 13 alternating red and white stripes, and 50 stars on a blue background, has been in place since 1960 with Hawaii’s admittance into the Union as the 50th state.

With such a robust and multilayered history, it’s little wonder that American Flags are so coveted by collectors. In terms of current interest for the American Flag market, Bridgman cites the particular appeal of flags with historical ties. This places Civil War flags, both Confederate and Union, squarely in the arena of greatest popularity. Also influencing today’s collecting trends is the recent controversy over the Confederate battle flag. The removal of Confederate monuments is actually fueling the market for legitimate historical materials, Bridgman said, adding that collectors have a heightened sense of awareness about how our nation’s history is preserved.

“We use history to teach our kids about how we have grown as a nation. Confederate flags are a part of that,” he said. “They are a part about how we struggled and evolved. The objects that the war produced – textiles and otherwise – are beautiful and fascinating in their own right.”

Another area receiving attention from collectors are political campaign flags. “(They) are achieving results at auction like never before,” Bridgman said.

Evidence of Market Interest: In more than a few instances, antique campaign flags entered an elevated level at auction in 2017. During its July 2017 auction, Hakes’ Americana & Collectibles presented a selection of campaign flags that prompted several well-publicized bidding battles. For example, an 1860 Lincoln and Hamlin campaign flag sold for $40,124; and a John Bell Constitutional Union Party flag rose to $13,700, nearly tripling its high estimate of $5,000, according to an article posted by Antique Trader. Yet, the example that made auction history was a campaign flag touting James Buchanan and John C. Breckinridge as the Democratic Party’s running mates in the U.S. presidential election of 1856. The flag sold for a record-setting $275,000 during a May 2017 auction conducted by Heritage Auctions. The winning bidder was none other than Bridgman, according to an article posted by LiveAuctioneers’ Auction Central News. 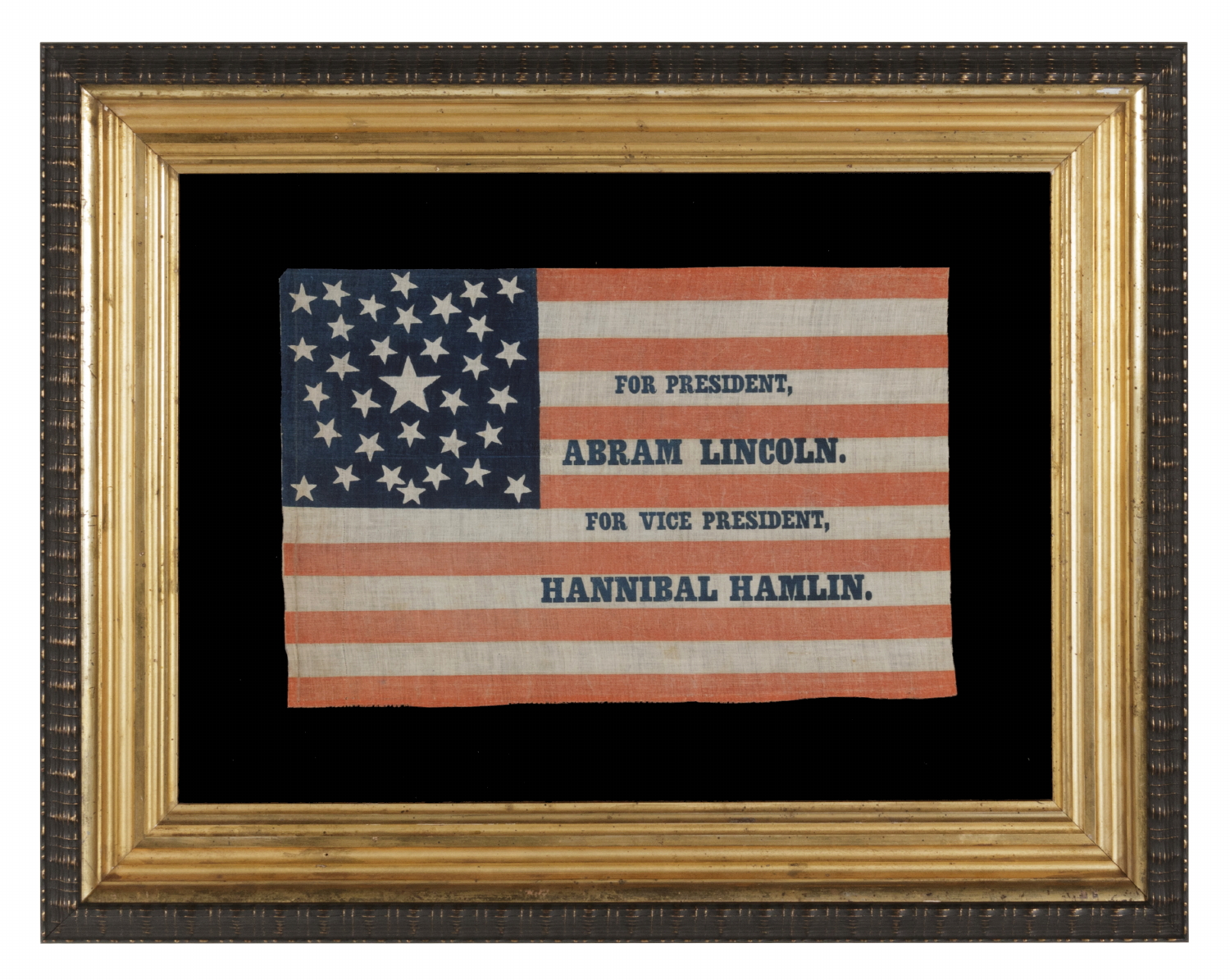 1860 campaign parade flag with 33 stars in a pentagon medallion configuration and with an uncommon abbreviation of President Lincoln’s first name. The flag’s provenance includes a period of time when it was sewn into a quilt consisting of several rare political flags. Measures 11½ by 17 inches. Price: $48,000, available from www.jeffbridgman.com.

In addition to activity at auction and direct sales through his company, Bridgman is also witnessing the appeal and interest in American Flags first hand at the many shows he attends each year.

“(Shows) usually provide a ton of education for both collectors and dealers alike. Sometimes we learn as much or more from clients as we teach them. Shows are often full of educated, interested historians and collectors of all kinds,” said Bridgman. “They are a great place to actually see and touch material first hand and ask all of the questions necessary and get answers straight from the horse’s mouth, if you will.”

Attendance at shows helps with the overall education of a collector, which is something they will draw on for a lifetime. This is particularly important when people are purchasing flags from sellers via the Internet. The virtual world can provide unimaginable opportunity, but it also can be an overwhelming and confusing place for collectors just getting started, according to Bridgman. This speaks to the importance of educating oneself and becoming familiar with the history of both flags and textiles.

Tips From the Top: Bridgman’s Advice About Starting a Flag Collection

With more than 25 years in the business of acquiring and selling flags, Bridgman’s appreciation for flags, their history and meaning runs deep.

“I love flags because they are not only an objectification of my love for America, its history and all it was intended by our forefathers to stand for, but also what America offers to people with the wherewithal follow to their dreams,” he said. “I also love the flag for the artistic achievement of the people who made it in the 18th and 19th centuries, when people had the liberty to design it as they chose.” 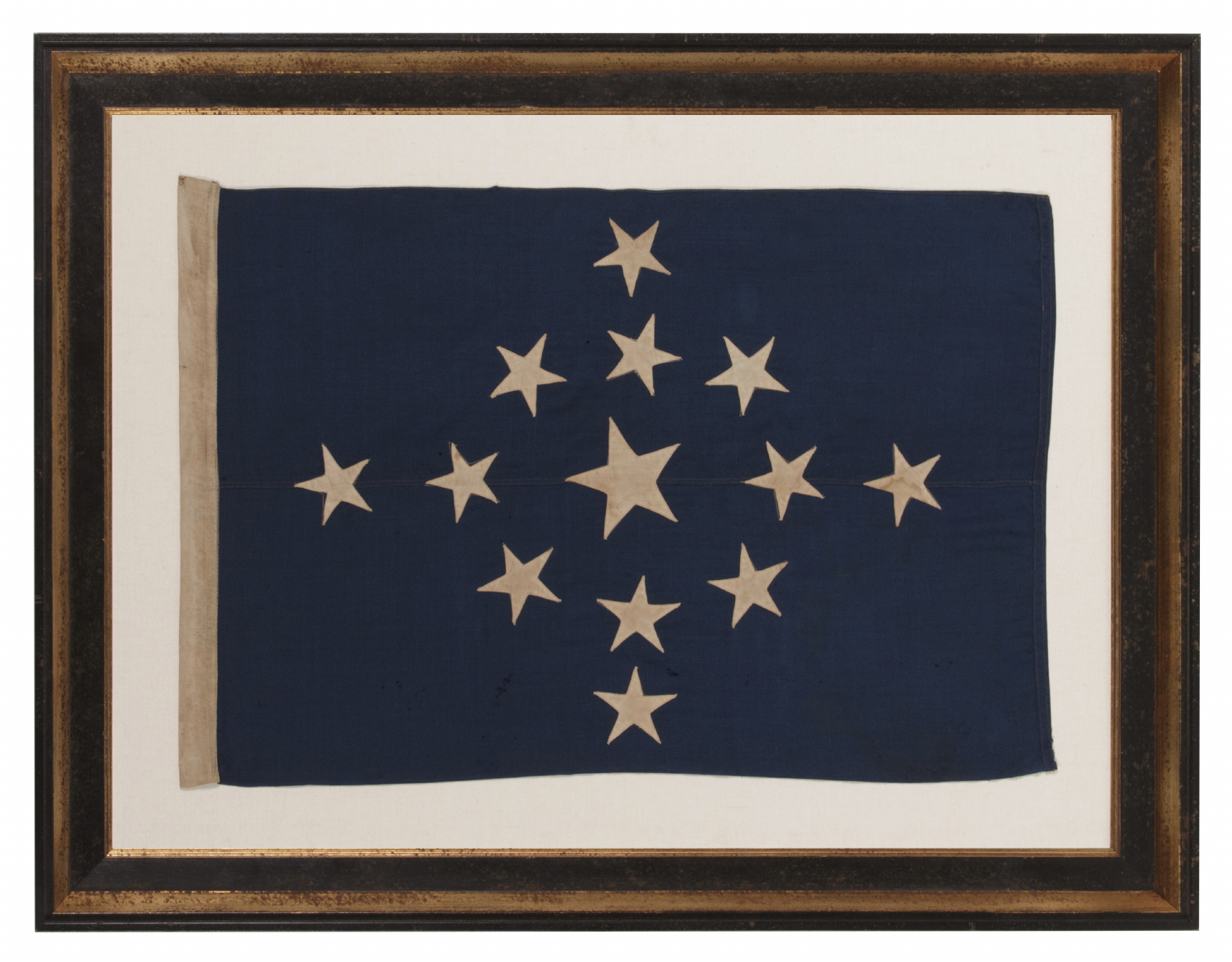 Thirteen-star American Navy jack with a diamond configuration that is unique among 13-star flags, likely made for a Hudson River paddle wheel steamer, circa 1880-1895. The jack flag is flown at the bow (front) of a military ship when at anchor or moored. Measures 23¾ by 35¼ inches, mounted and framed by Bridgman Antiques, Inc., conservation department. Price: $9,800, available from www.jeffbridgman.com.

At any given time, Bridgman has about 2,500 flags in stock, with the majority dating to the 19th century, some from the 20th century. Interestingly, recently he re-acquired a flag he had sold years ago. His in-depth explanation about the flag’s provenance demonstrates the type of appreciation Bridgman has for flags, and his intention to help others cultivate that appreciation for themselves.

The flag he re-acquired, Bridgman explained, is “a Liberation flag, made in France to celebrate the arrival of American troops following the Normandy invasion. Specifically, it was given to the 3rd Squad of the 8th Infantry Regiment (Motorized), which served under the 4th Infantry Division during the June 6 attack.”

He went on to say, “On the following day, the unit relived the famous 82nd Airborne Division at Ste. Mere/Eglise, battling German tanks and Panzer Regiments. Members of the French resistance movement presented the flag to the 3rd squadron while passing through French territory, and the squad proceeded to carry it through the balance of the war.”

“It has a beautiful, light blue, silk canton and wide red stripes that are a deep scarlet,” Bridgman said, describing the flag. “Like many of the flags I love best, it’s beautiful and unusual as well as historical.”

Finally, when asked about the valuable lessons that can be learned from exploring the American Flag’s long design evolution, Bridgman offered the following thoughts:

“[An appreciation for] quality hard work and a job well done, caringly delivered, value in handcrafted construction and thoughtful design; pride in patriotic love for our country, its people, and the men and women of our military who, with their own will and that of many great presidents and leaders, have afforded us all of the things we have today.”

He continued: “Many of these we take for granted, wanting more and more, and demanding special attention at every turn. A historic flag reminds me of a simpler time, when men and women made their own happiness from their own sweat and endeavors, and thanked God for what this great nation made available.”

Sale of Lincoln and Hamlin flag through Hake’s:
http://www.antiquetrader.com/antiques/collectibles/1860-campaign-flag-sets-world-record/