NEW YORK – Is there anyone in the world who hasn’t heard of Dr. Seuss? Certainly every American baby boomer is familiar with the iconic author and illustrator of such quirky, classic kids’ books as The Cat in the Hat, How the Grinch Stole Christmas, Green Eggs and Ham, Horton Hears a Who and If I Ran the Circus.

In all, Dr. Seuss wrote and illustrated more than 60 books that were translated into over 20 languages and sold 600 million copies. No wonder his name is known the world over. He wasn’t just an author and illustrator; Dr. Seuss was a true cultural phenomenon. 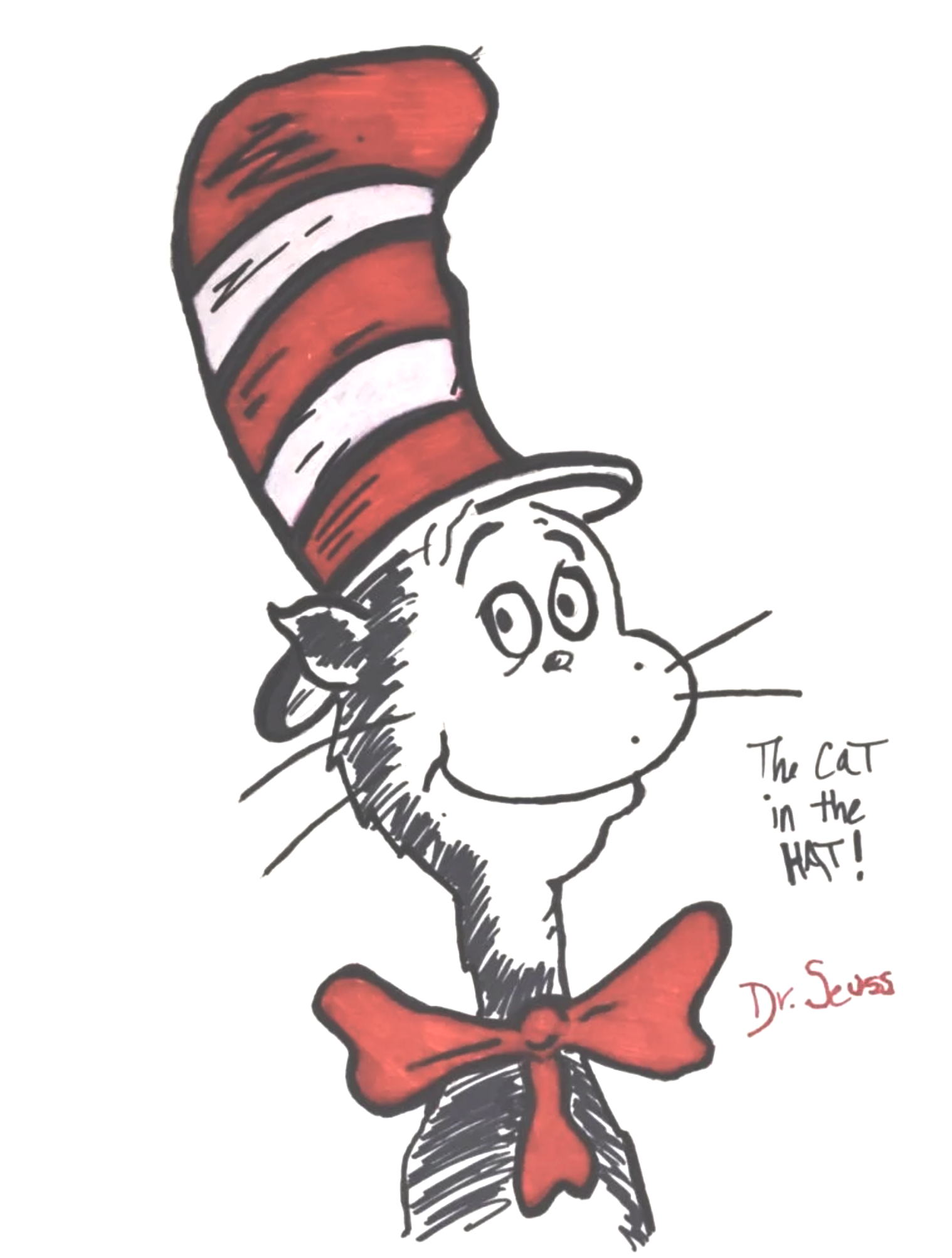 Theodor Seuss “Ted” Geisel (1904-1991) was born in Springfield, Massachusetts. His father managed the family brewery until Prohibition, when he was appointed to supervise the city’s public park system. Young Geisel entered Dartmouth College and became editor of the school’s humor magazine, the Jack-O-Lantern. When he and some fraternity brothers were caught drinking gin on campus (Prohibition had not yet been repealed), Geisel was ordered by Dartmouth’s dean to step down from the Jack-O-Lantern. He stayed on, secretly, using the name Seuss – his mother’s maiden name, which actually rhymes with “voice” – and it stuck. The “Doctor” was added later.

Geisel’s early artwork often employed the shaded texture of pencil drawings or watercolors, but in his children’s books of the postwar period, he generally made use of a starker medium – pen and ink – normally using just black, white, and one or two colors. 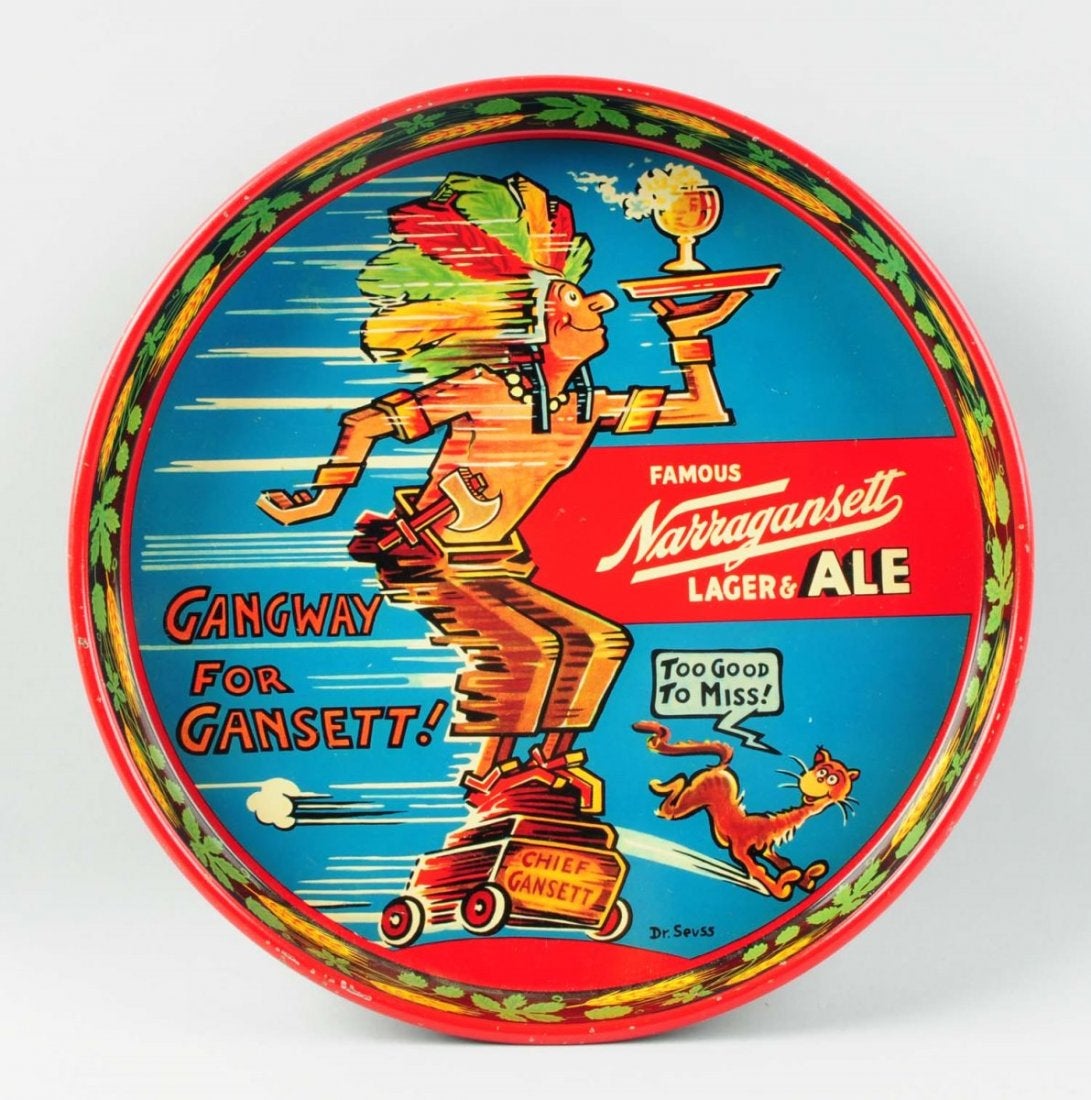 Narragansett Beer serving tray with an image illustrated by Dr. Seuss, 12in wide, only a few edge nicks, otherwise excellent. Sold for $270 at an auction held Aug. 10, 2014 by Morphy Auctions. Image courtesy of Morphy Auctions and LiveAuctioneers

His later books, such as The Lorax, used more colors. Geisel’s style was unique – his figures were often “rounded” and somewhat droopy, like the faces of the Grinch and The Cat in the Hat. Almost all his buildings and machinery were devoid of straight lines, even when he was representing real objects. For example, If I Ran the Circus shows a droopy hoisting crane and a droopy steam calliope.

Geisel’s illustrations often conveyed motion vividly. He was fond of a kind of “voilà” gesture in which the hand flipped outward and the fingers spread slightly backward with the thumb up. This motion was done in the introduction of the various acts of If I Ran the Circus, and in the introduction of the “Little Cats” in The Cat in the Hat Comes Back. He was also fond of drawing hands with interlocked fingers, making it look as though his characters were twiddling their thumbs. He was a true original, someone whose artistic style was instantly recognizable. 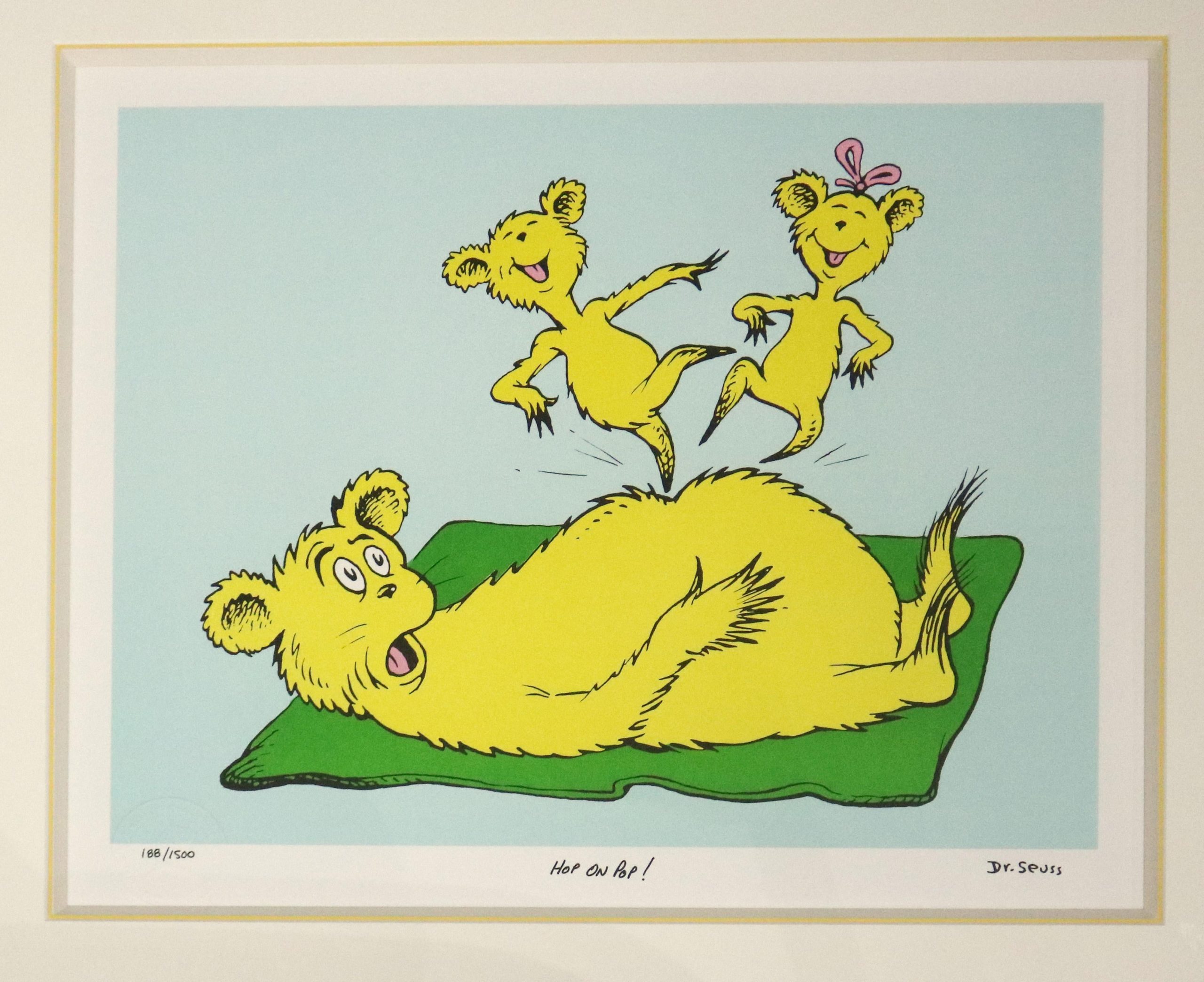 “Dr. Seuss had a tremendous talent for bringing whimsical characters to life,” said Alexa Malvino, a senior fine art specialist with Clars Auction Gallery in Oakland, California. “No matter the age of his audience, it’s impossible to not be captivated by his vibrant colors and imaginative designs. The magical works he created under his nom de plume Dr. Seuss, geared for children’s books and drastically different from his work as a political cartoonist, have transcended generations.”

Malvino said Dr. Seuss has been a household name since the 1950s. “He invites his viewers to enter the vast world of imagination where animals talk, landscapes take on other worldly designs, and vibrant shapes and patterns distort illusions of space and time,” she remarked. “To say he was a pioneer in children’s cartoons would be an understatement.” 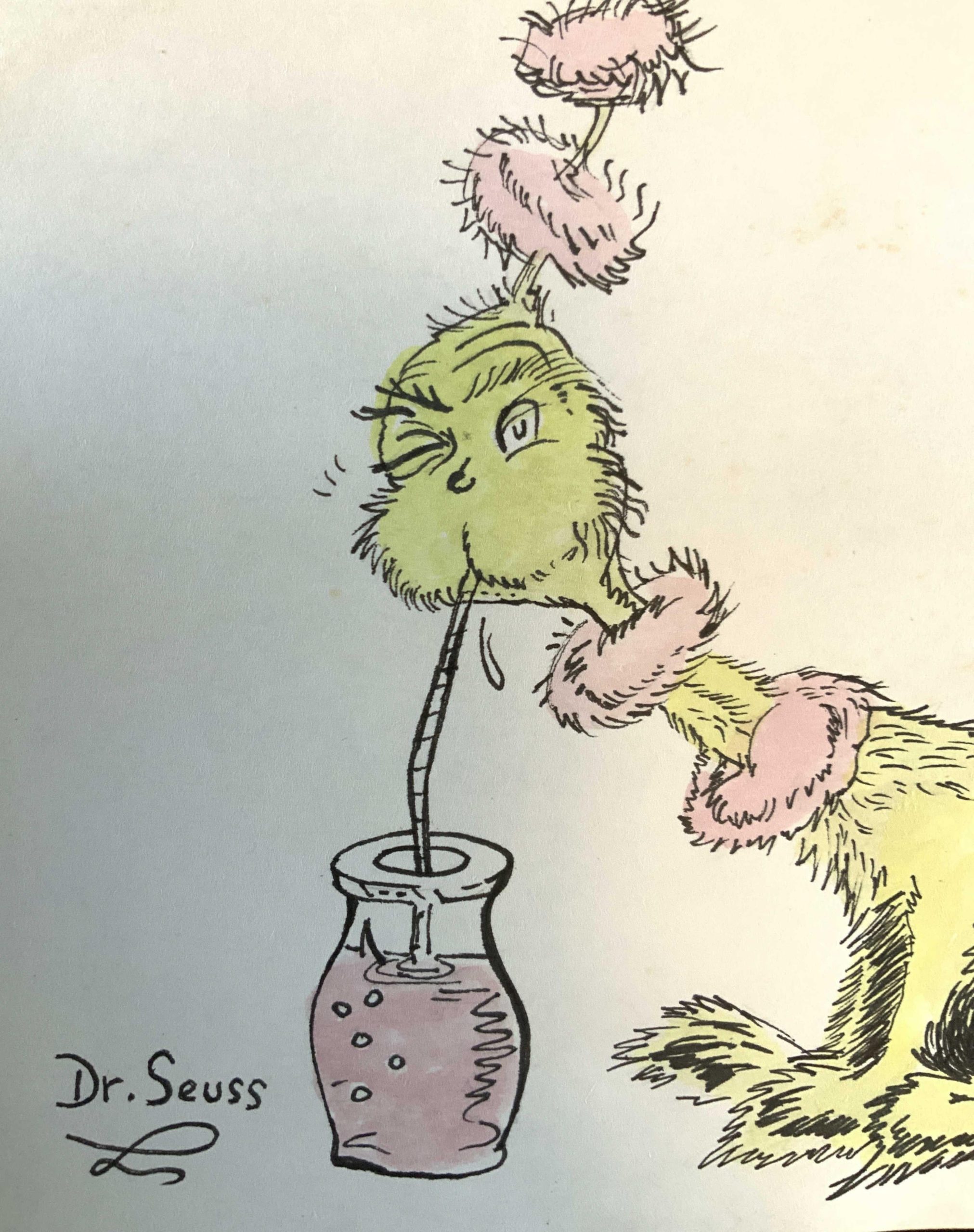 Pam Stone, owner and founder of the Benefit Shop Foundation Inc. in Mount Kisco, New York, described Dr. Seuss’s work as “whimsical artworks and fun to look at.” She said, “For most of us who grew up reading his books, these fantastical creatures, especially the Cat in the Hat, are fun to look at but they go deeper than that. Geisel created these with a serious-minded goal in mind: to teach children how to read, be confident and above all else, to use their imagination. Books like I Can Read With My Eyes Shut! or Oh, The Places You’ll Go are two of his books that first come to my mind, which explore these themes.”

Vince Sarchese of American Antique Auctions in Haddon Heights, New Jersey, said Dr. Seuss’s artistic style is immediately recognized all over the world. “His creative characters and environments function together in a kind of Rube Goldberg world, so playful and joyous but ready to fall apart at any second,” Sarchese said. “As an illustrator, he consistently brought his written stories to life – no easy task. He kept children wanting more all the time through his kinetic and iconic characters. His art is whimsical, joyful and sometimes even angry, but always effective. I would rate him as a first-class illustrator.” 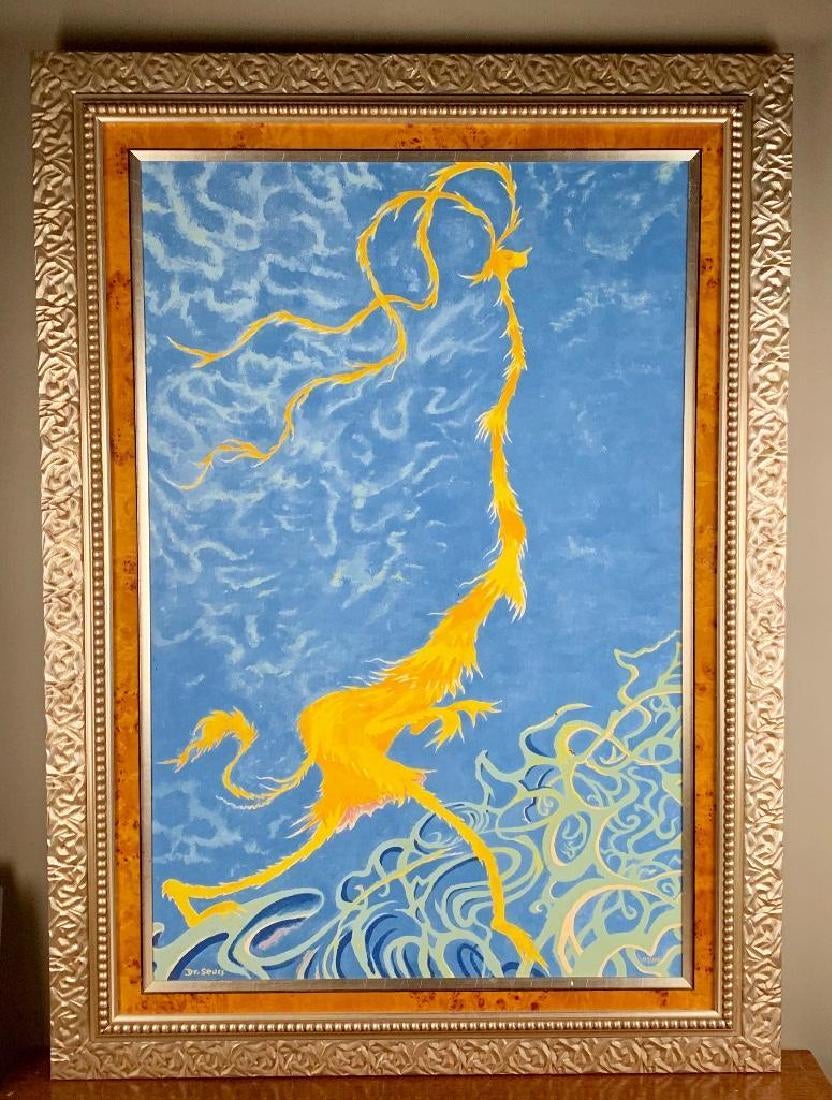 Alexa Malvino said Dr. Seuss’s work and imagery have been desirable and sought after since their creation. “Not only have more than 600 million copies of his books been sold, but many of those stories have been made into motion pictures, several in recent years,” she stated. “The art scene has also benefited from his coveted images. Collectable prints, sculptures, and even rare paintings and drawings have sold for astonishing values, at both galleries and auctions alike.”

In fact, Malvino added, one of Dr. Seuss’s highest auction records was the sale of a small original illustration from his book The King’s Stilts, which she said sold for just over $80,000 in 2007. “Today, reproduction works and newly printed ‘limited edition’ series do threaten the market of his works by flooding it, thus driving down prices,” she pointed out. “But, for truly original works, it’s possible the market will never diminish, just as his stories and captivating imagery show no signs of disappearing from American, or even international, culture. As long as his art continues to bring out the child in all of us, it’s likely we’ll always keep wanting more.” 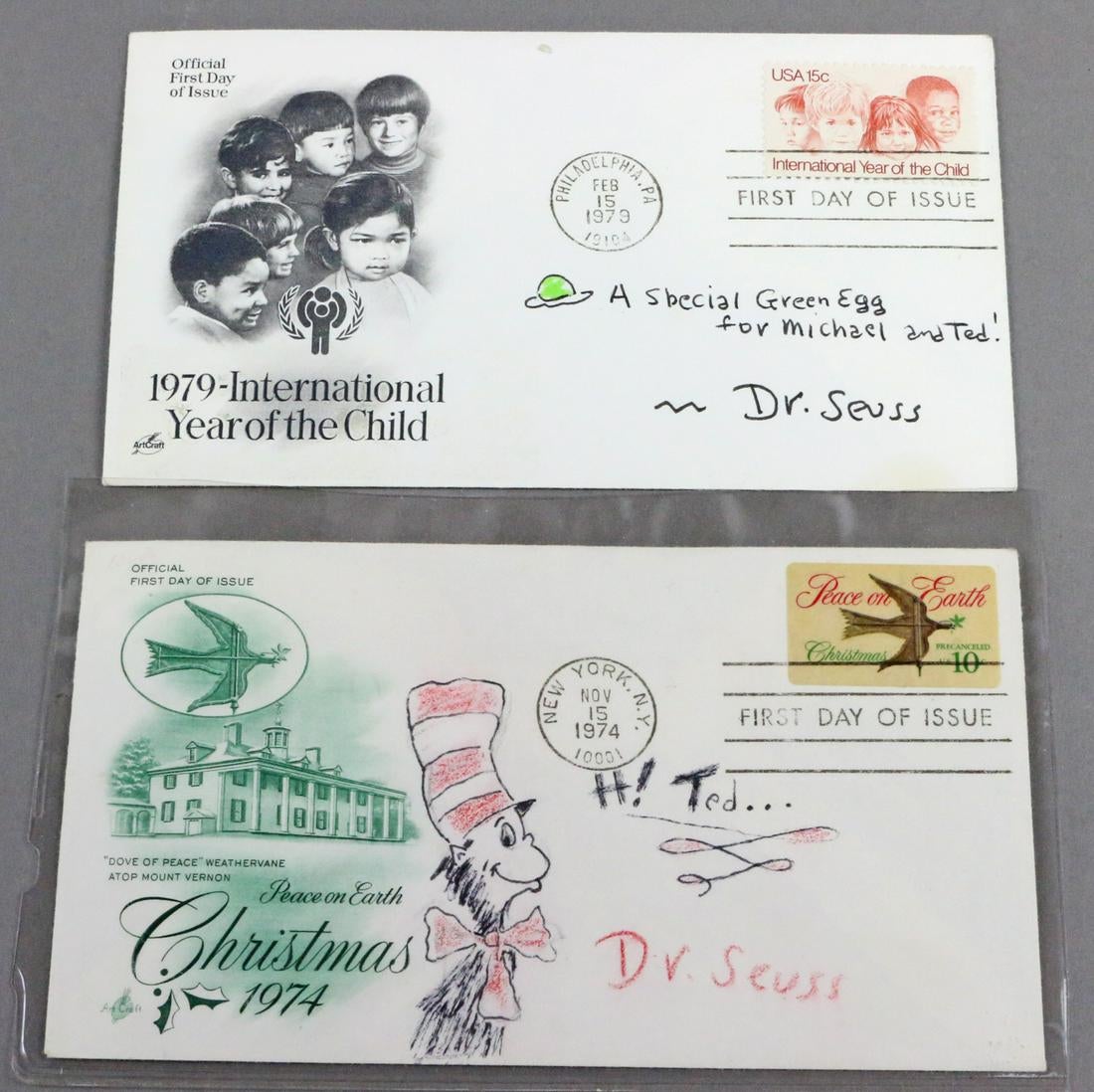 “The market is fairly steady and strong for Dr. Seuss artwork, with original pen and ink and watercolor illustrations being among the most collectible,” The Benefit Shop Foundation’s Pam Stone said. “These works, especially rare and unpublished ones, have brought around $10,000 each in the past. Marker illustrations, often in red and blue, are more commonly seen and, when signed, can bring a few hundred dollars. We sold several such artworks recently, and buyer interest was high among new collectors just starting to get into collecting this genre.”

Vince Sarchese said with children learning to read books by Dr. Seuss and billions of books in circulation, there’s little doubt his original works will continue to increase in value. “The interest has never been higher and has been increasing in recent years,” he said. “I can’t see any decrease in demand on the horizon for the works of Dr. Seuss. His unique style succeeds in making us laugh and think. Just like any other art or antique, provenance and condition are the key to value. The great thing is, small signed works are still affordable, but I wonder for how much longer.” 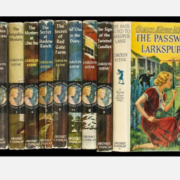