“The first things I bought were the die-cut scraps that embellish many of the Victorian Valentines. I thought I would one day use them for decoupage, a popular craft, when my children were older,” she told Auction Central News. “When I discovered they were on Valentines, I started looking for Valentines – and then the serious collecting began. It was a combination of their beauty, the messages, and the history that drew me in.” 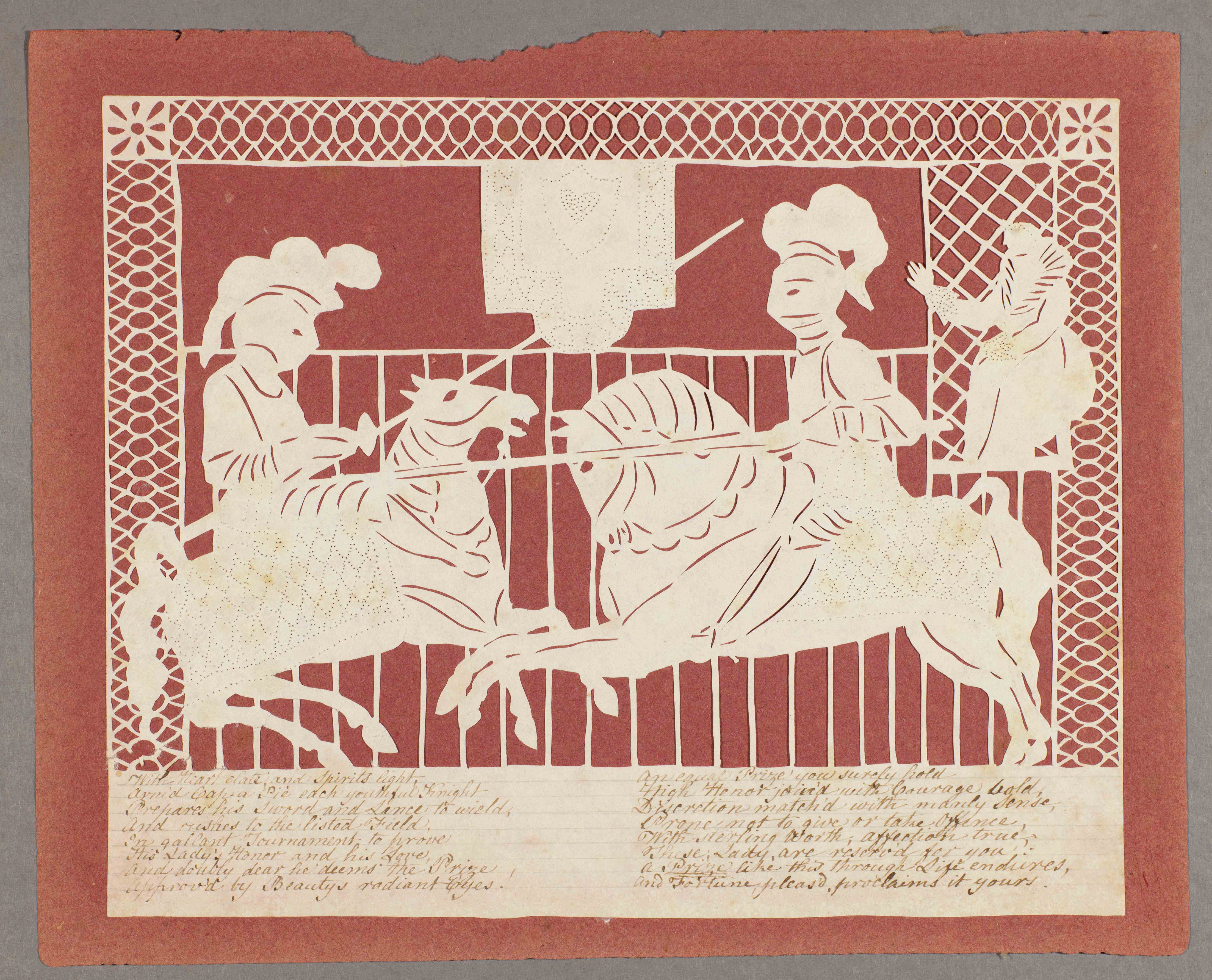 After her collection numbered somewhere over 12,000 examples of Valentine, friendship and devotional ephemera, her son and his wife, to whom she had given it, entrusted the collection to The Huntington Library Art Collections, and Botanical Gardens in San Marino, Calif., in 2018.

Rosin remains as passionate about Valentines as ever, cataloguing examples at such renowned institutions as the Metropolitan Museum of Art in New York City and giving lectures on this subject.

The most striking of Valentine’s cards are the handmade ones, particularly those dating to the Victorian era, and the skills used to make cards that fold-open, boast three-dimensional features or have intricate designs cut out of paper lace are impressive to behold. Particularly desirable are those employing cobweb devices where one pulls on a string to lift up the cobweb, exposing a hidden image (sometimes several) or a secret message. 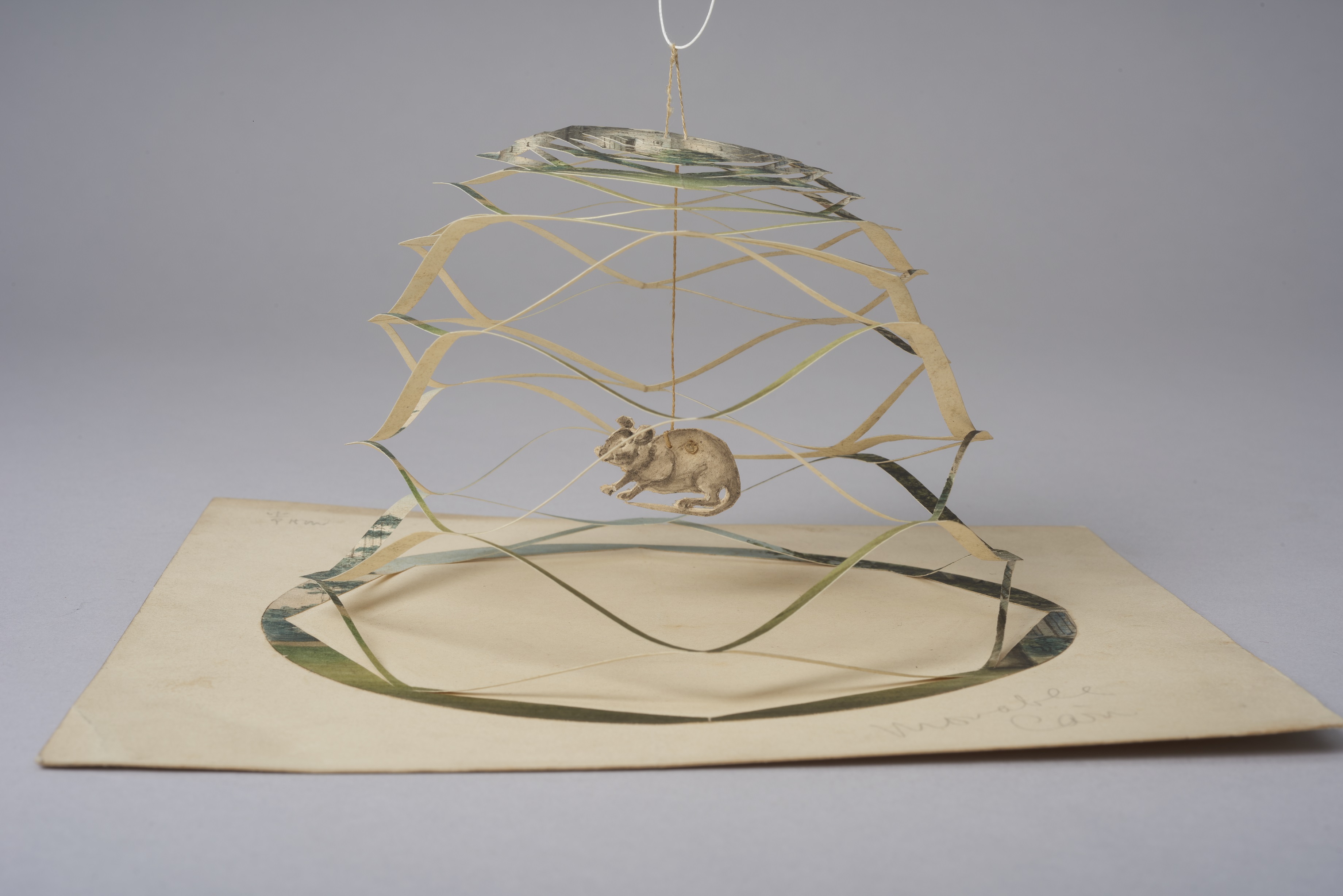 Cobweb valentine card (image detail shown), probably British, circa 1830‐1860. Pull a string attached to the castle, and a cobweb device lifts to reveal a mouse in a trap. All images except where noted are gift of Belle and Robert Rosin, Nancy and Henry Rosin Collection of Valentine, Friendship, and Devotional Ephemera. Image courtesy the Huntington Library, Art Collections and Botanical Garden

Themes and subject matter are endless, ranging from typical romantic subjects one might expect such as cupids, children, young women and couples, flowers, birds and more to the satiric and political.

There is even a genre of insulting Valentine’s cards known as vinegar Valentines with such snarky sentiments as, “On each Sunday morning to church you repair, And turn up your nose with a sanctified air, But see you at home what a different sight, As you read nasty books and drink gin half the night… ” These were commonly aimed at politicians too. 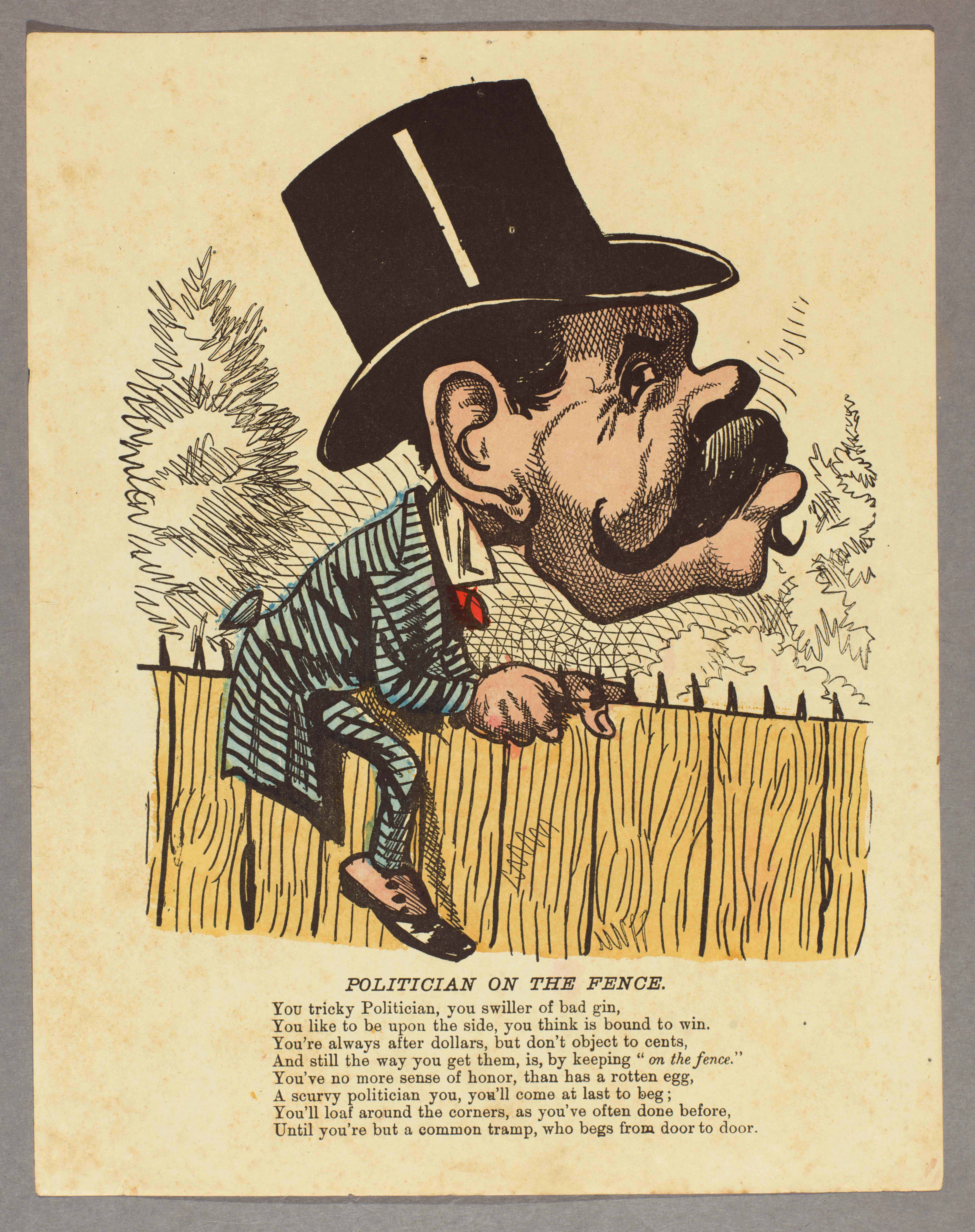 The more unique the card, either in sentiment or design, the more collectors will covet that particular example. Highly detailed Victorian paper lace Valentines are a favorite among many collectors. Often constructed of layers of scalloped and embossed paper, die cuts and paper lace in white and silver, the lace often is set on paper strings to give it a three-dimensional effect.

Among renowned card artists/illustrators are Kate Greenaway, Walter Crane, Elizabeth Cobbold, Frances Brundage, Ellen Clapsaddle and Grace Drayton, said Rosin, adding, “I imagine Frances Brundage was the most well-known, and her images of children were fabulous.” 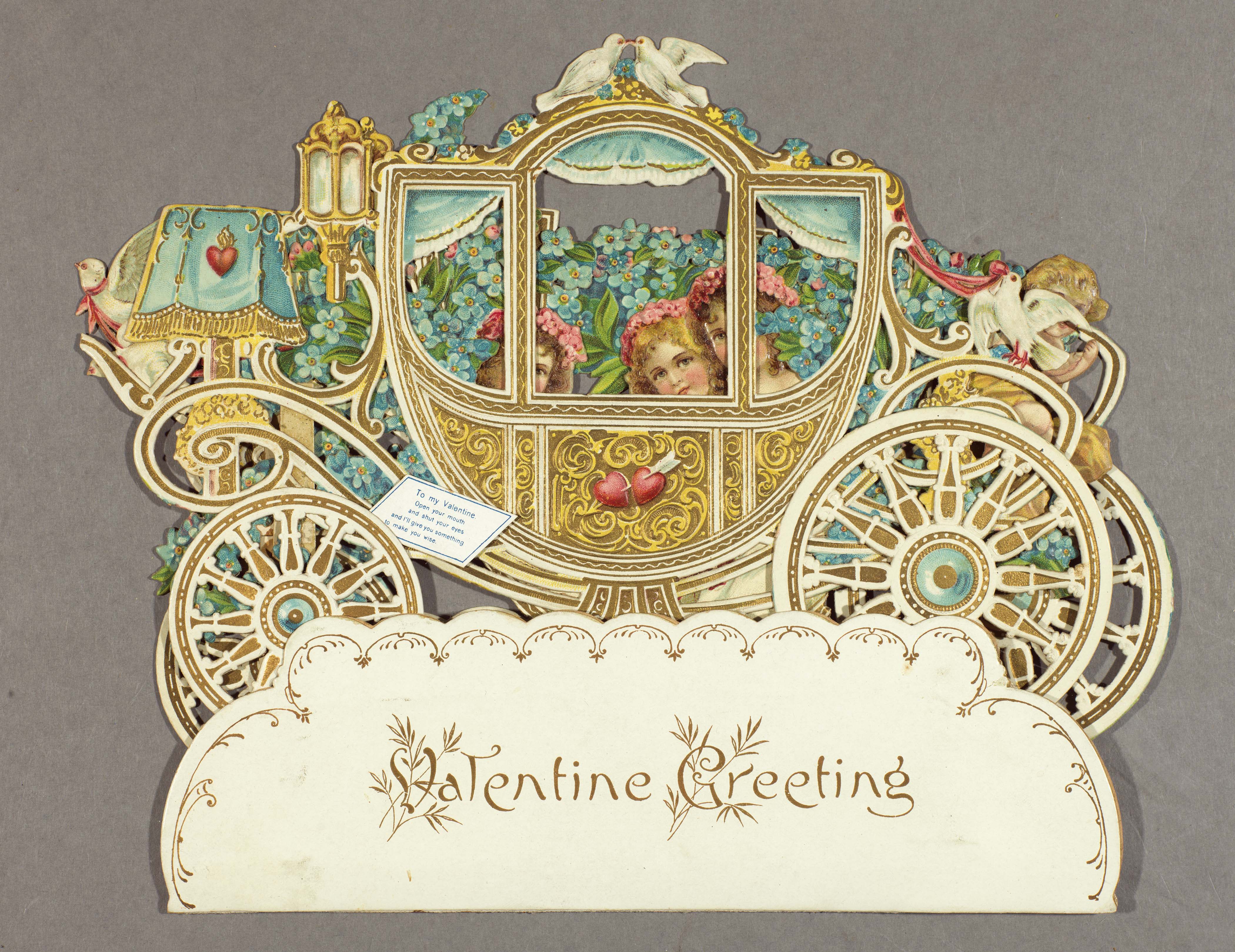 Collectors and even casual viewers are especially drawn to a card’s message of love. “They were sentimental and tender. Civil War Valentines, for example, were often the connection to home – the Sailor’s Farewell refers to the seafaring men who went off for military, or for whaling – and it was a popular theme that I especially love,” Rosin said. “The ‘Language of Flowers’ is an important component, as messages could be sent with a bouquet – no words necessary, if you knew their meaning.” Each flower had a particular meaning understood by both the sender and recipient in the 19th century (mixed bouquets can be a bit more challenging though for today’s viewers to decode) such as lilies signified purity, red roses were a declaration of love, white chrysanthemums equaled truth and so on. 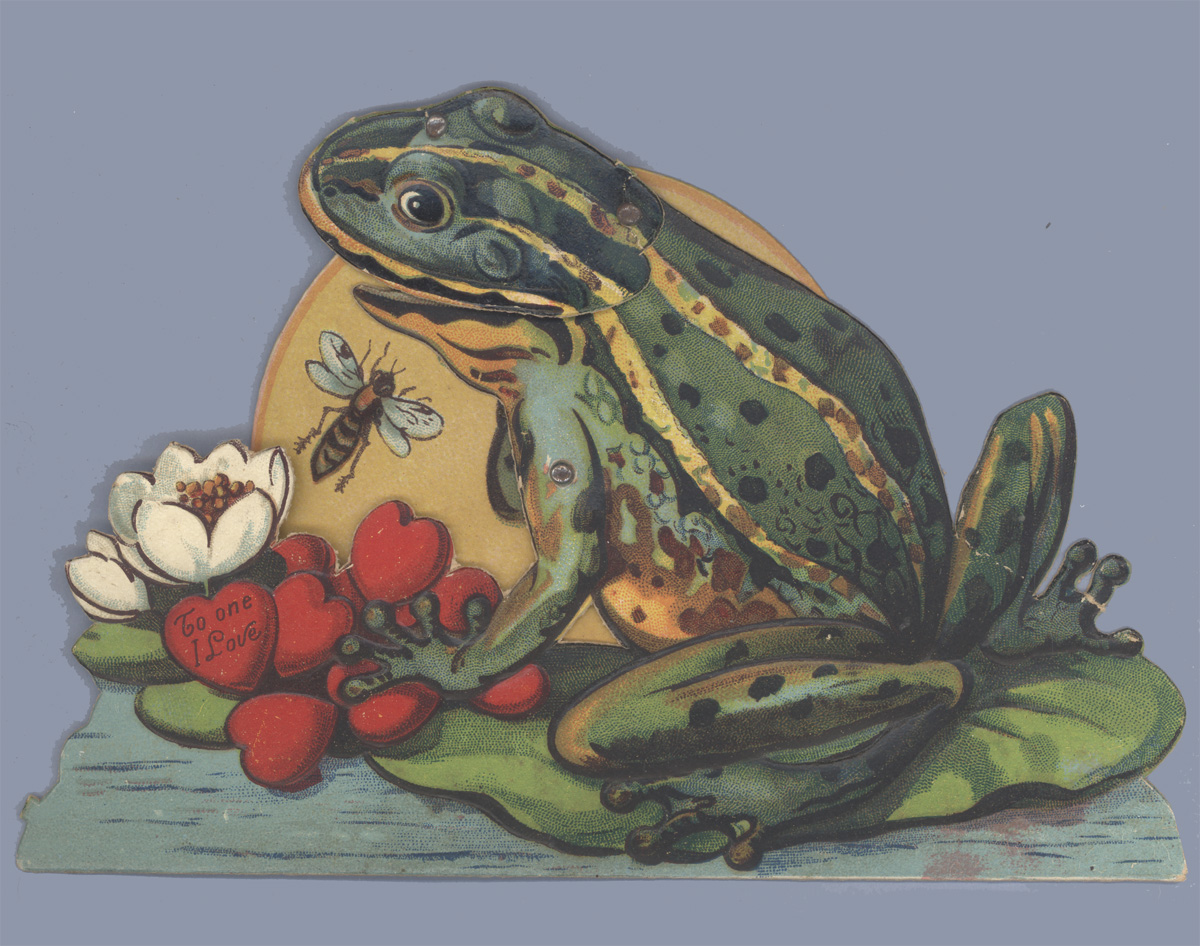 This is a series from the 1920s featuring animals and figures eating hearts. Made in Germany, it has a rotating wheel and mechanical mouth. Image courtesy of Vintage Valentine Museum

Jolene Sliwka of North Carolina runs the website known as the Vintage Valentine Museum and says collectors vary quite a bit in what they consider most desirable. “For many this would mean the elaborate standup displays and fantastic characters created by known artists like Frances Brundage or Chloe Preston,” she told Auction Central News. “Some of these can be large and feature paper puffs or sections designed for light to shine through pieces of colored paper. These large, pull-down cards don’t have to be by known artists to be very desirable. There are examples of quite large pull-down boats that are so popular I haven’t been able to acquire one at a price I can afford for the museum.” 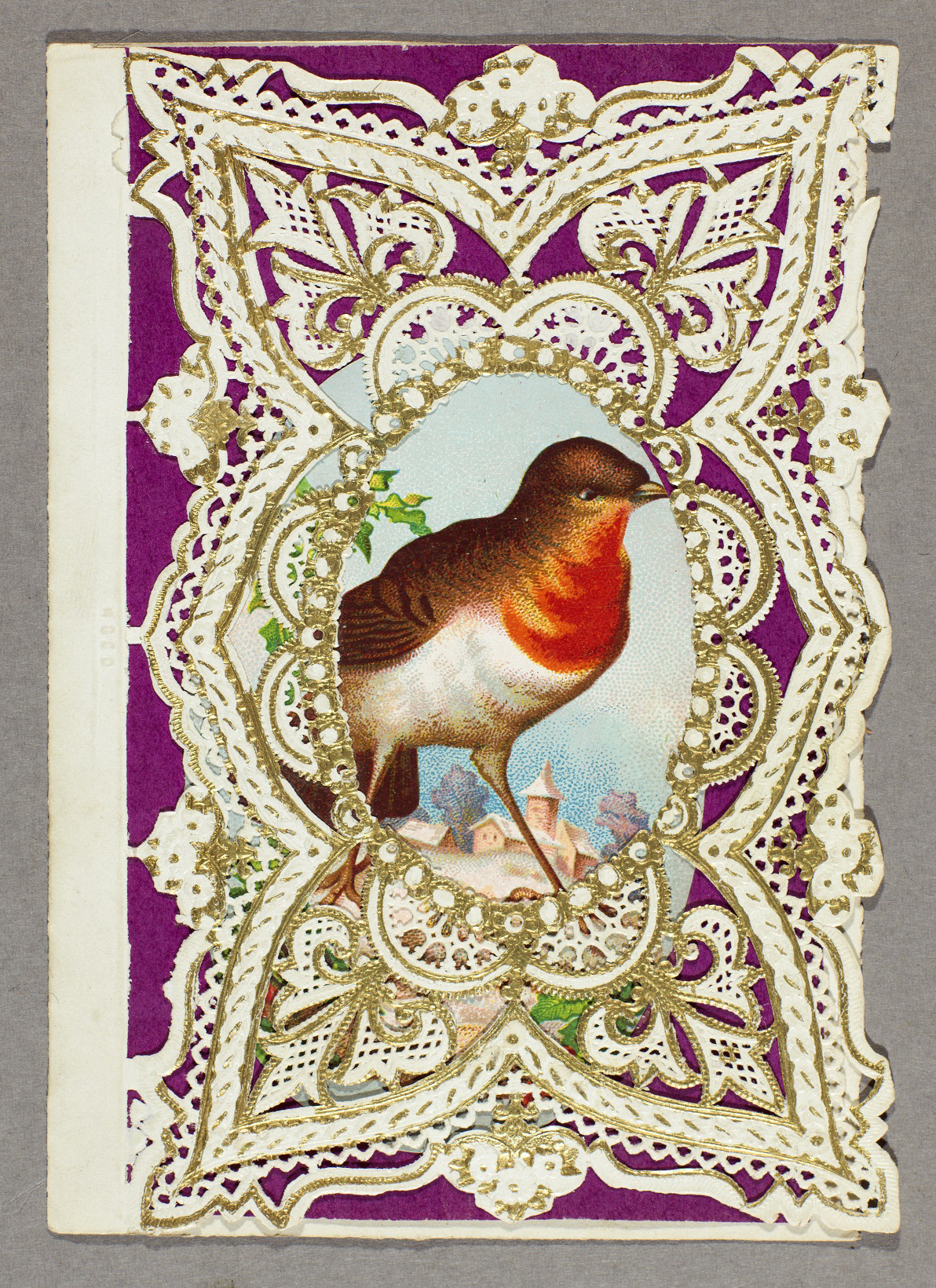 Valentine card, American, circa 1870, by Esther Howland (1828‐1904), who was said to be the first to produce English-style romantic, hand-decorated cards in large commercial quantities. Image courtesy the Huntington Library, Art Collections, and Botanical Gardens

Many collectors focus on a particular artist or sometimes a category such as mechanical cards or puzzle purse cards, Sliwka said. “For others, the paper lace cards, with exquisite embossing and cutout pieces, that the Victorians exchanged are what they most desire,” she said, noting in the latter genre, Esther Howland of Worcester, Massachusetts, as a woman in 1848 began showing her business prowess at a time unusual for women engaging in commerce, earning a strong following for her romantic cards.

Rosin suggested new collectors do their homework before buying their first Valentine. “Look at Valentines wherever you can – shows, auctions and museums. You don’t have to buy – first look, touch and see what you love and be knowledgeable.” 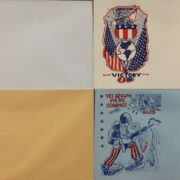