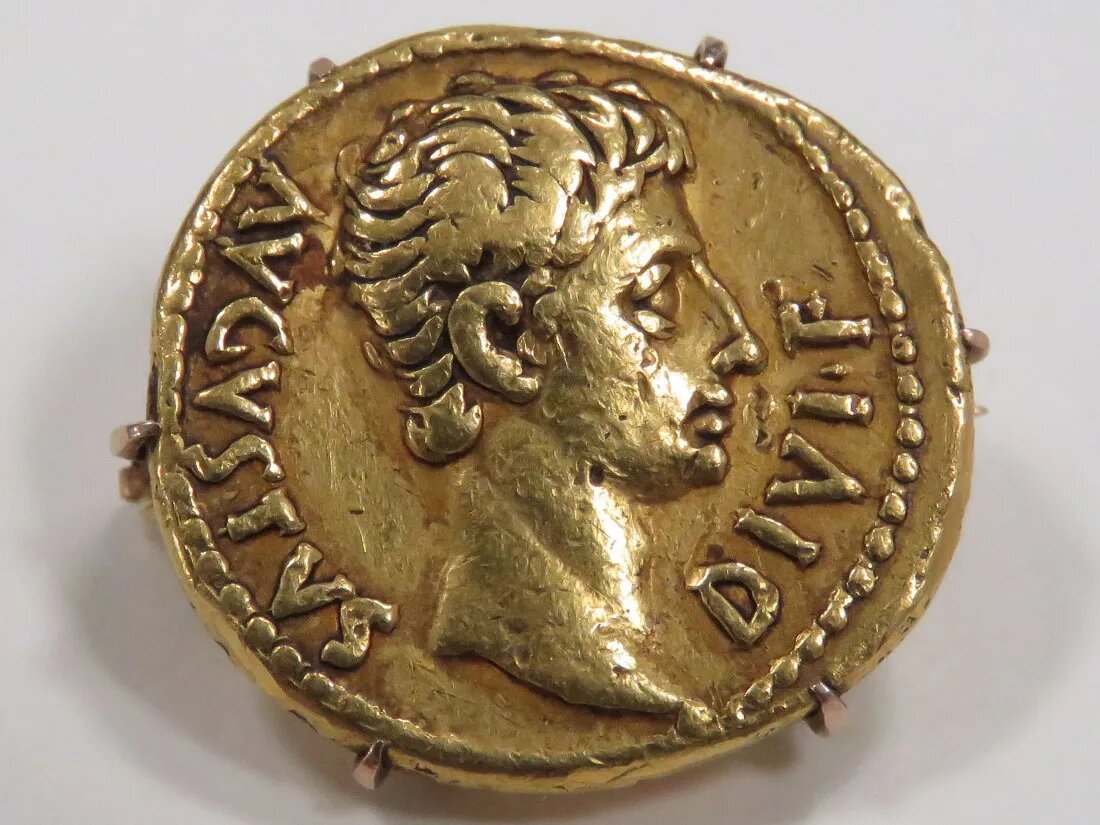 The profile of Roman Emperor Caesar Augustus, also known as Octavian, appears on this period gold coin that realized $3,400 plus the buyer’s premium in January 2016. Image courtesy of William J. Jenack Auctioneers and LiveAuctioneers

Whenever Roman gold coins turn up in unlikely places, it’s headline news. In 2018, about 300 gold coins from ancient Rome were found buried in a soapstone jar beneath a closed-down movie theater north of Milan. Two years earlier, a Roman gold coin from the time of Nero was discovered in Jerusalem. Both of these finds attracted widespread interest.

Farmers and construction projects have unearthed hordes of Roman coins throughout the former Roman Empire. One Roman gold coin was even found in Okinawa, Japan. Often, such coins are sent to auction, where there is no shortage of collectors waiting to bid. For example, many news outlets covered the November 2020 sale of a gold coin issued by Marcus Junius Brutus, the assassin of Gaius Julius Caesar. It achieved $3.5 million and became the most expensive Roman gold coin ever sold at auction.

The coins of Rome are just as much a symbol of the defunct empire’s reach and influence as its stunning frescoes, statues and architectural ruins. Like artworks, they tell us what ancient Romans deemed important. Then, as now, these coins are worth much more than their melt value.

Securitas, the Roman goddess of security and stability, appears on the reverse of an aureus showing Emperor Probus (276AD-282AD). It achieved £6,000 (about $7,900) plus the buyer’s premium in December 2016. Image courtesy of Timeline Auctions Ltd. and LiveAuctioneers

Rome adopted the coinage system in the late 4th century BC, about 300 years after the Greeks did. The introduction of national coinage did at least two things for Rome: coins brought economic stability to a prevailing barter system and, more importantly, the little metal discs were excellent amplifiers of politics and popular culture. They highlighted the ruling elite, monuments, battles and victories of the far-flung empire. Every time a new coin iteration is unearthed, we learn more about Rome and its history.

At first, Roman coins were primarily of bronze, with some in silver and relatively few in gold. They were created with the precious metals acquired during the series of Punic Wars that occurred between 264 and 146BC.

Gaius Julius Caesar was in office from 49 BC to 44 BC and was assassinated on the Ides of March by a group of senators including Brutus, a longtime supporter and general. This gold coin showing Julius Caesar in profile sold for $4,200 plus the buyer’s premium in February 2021. Image courtesy of Ira and Larry Goldberg Coins & Collectibles and LiveAuctioneers

The reign of Julius Caesar, which began in 46BC, brought big changes to the minting of Roman gold coins. The weight of a coin was standardized at slightly more than eight grams (a troy ounce of gold is 31.1 grams), and contrary to the empire’s former practice, gold coins were minted more frequently. Officially called nummus aureus (gold money), the aureus was the standard gold Roman coin until 301AD, a span that lasted nearly 350 years.

A somewhat worn aureus from the time of Emperor Nero (54-68 BC) showing a reconstruction of the Temple of Vesta on the reverse achieved $3,000 plus the buyer’s premium in June 2020. Image courtesy of Artemis Gallery and LiveAuctioneers

The aureus is the most sought-after Roman coin due to its scarcity, its association with the period of the emperors, and the fact that it was minted 24K pure gold throughout the time of its production. But constant warfare and state projects prompted inflationary pressures, which nudged state authorities to slowly reduce the weight of the aureus from the 8.1 grams of Julius Caesar’s era to 6.5 grams by the time of Emperor Caracalla in 211AD – a fact that matters at auction.

In 301AD, Emperor Diocletian phased out the aureus in favor of the solidus, which was minted at 5.5 grams of gold per coin. Because relatively few were circulated, collectors still refer to the Diocletian-era coin as an aureus. Emperor Constantine reintroduced the solidus in 312AD, and it became the official gold coin of the empire, with a weight of 4.5 grams. No matter how small the solidus became, the amount of gold per coin never dipped below 24 karats.

This very thin solidus featuring Emperor Honorius (395AD-423AD), one of the last co-emperors of Western and Eastern Rome, sold for $1,500 plus the buyer’s premium in November 2018. Image courtesy of Artemis Gallery and LiveAuctioneers

By 260AD, Germanic tribes had gained enough control over the western territory to effectively cut the Roman Empire into two separate states. After the fall of the Western Roman Empire in 426AD, the Eastern Roman Empire, based at Byzantium in Constantinople (in modern day Turkey), persisted until 1453AD.

Gold coins issued by the Eastern Roman Empire are fairly similar to those issued by the Western Empire. They were also known as solidi and show the image of the emperor in full face on the front, or obverse (Western emperors were shown in profile); and usually have Christian symbols on the back, or reverse. By the 10th century, gold coins featured the image of Jesus in place of the emperor, along with the Latin phrase ‘”XRISTUS/bASILEU/bASILE” (Christ, Emperor of Emperors). 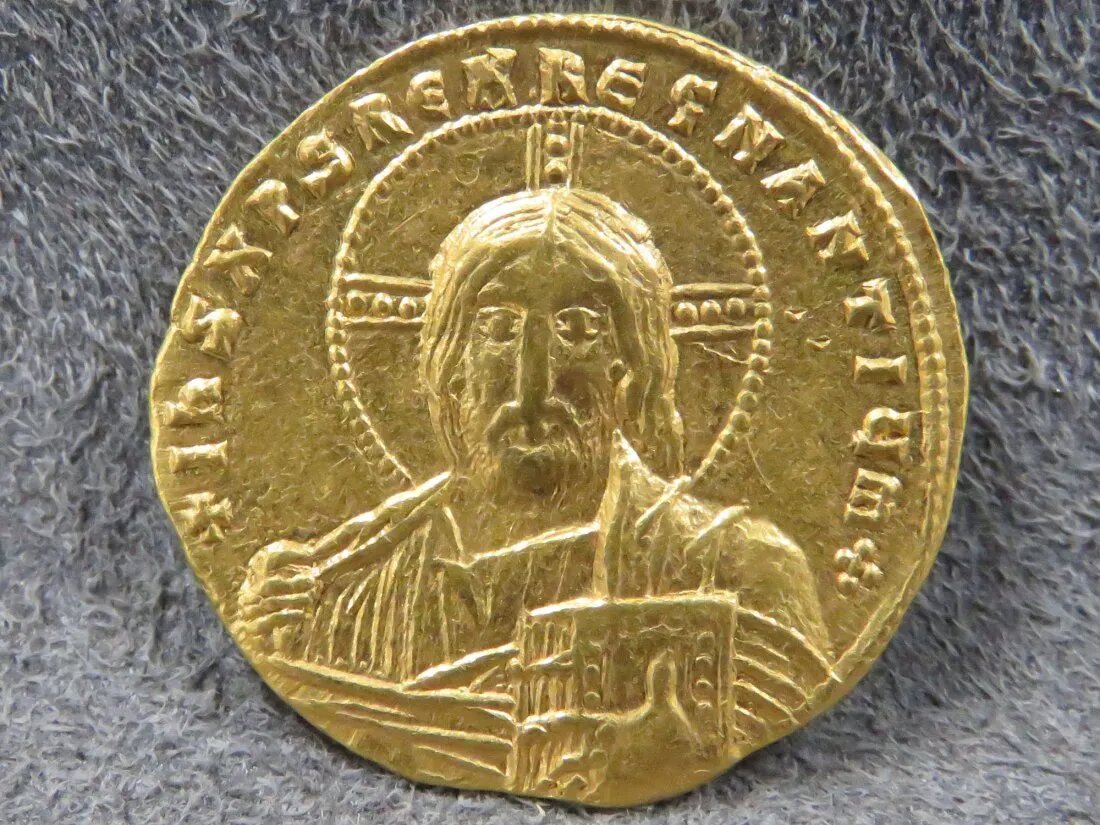 A small solidus from the Eastern Byzantine Roman Empire from Constantine VII’s reign (913AD-959AD), featuring the image of Christ, sold for $450 plus the buyer’s premium in May 2015. Image courtesy of William J. Jenack Auctioneers and LiveAuctioneers

By the time the Eastern Roman Empire ended, during the Middle Ages, its gold coins were thin wafers. They don’t bring the same prices at auction as do the aureus of the Western Empire, especially those emblazoned with the images of historically prominent Western Roman Emperors such as Julius Caesar, Nero, Brutus, Marc Antony and Octavian.

Part of the fun of collecting gold Roman coins is learning to identify the images they bear. Each coin features the likeness of the sitting emperor on the obverse, which pinpoints the era. The reverse will correspond to a particular battle, honor or victory of that period. Interpreting the coin’s symbols and markings help to establish its age.

Emperor Hadrian, who ruled from 117AD to 138AD and was responsible for Hadrian’s Wall, appears in profile on an aureus that achieved $3,400 plus the buyer’s premium in September 2021. Image courtesy of Larry Goldberg Coins & Collectibles and LiveAuctioneers

All Roman gold coins are minted with Latin script, and most feature the letters CS. The initials mean “Senatus Consulto,” or Roman Senate, which authenticates the coin as having been minted by the authority of the state.

The coins were minted by being pressed, one by one, through a plaster mold, so they were never expected to appear perfectly round. As noted above, the weight of the coin is key, and older coins tend to weigh more. Of course, condition matters, too. Gold tends not to tarnish and, in general, gold coins are better-preserved than silver and bronze ones, but the quality of the strike makes a difference at auction. The images should be clearly legible on both sides, and the crisper they are, the more desirable the coin is. 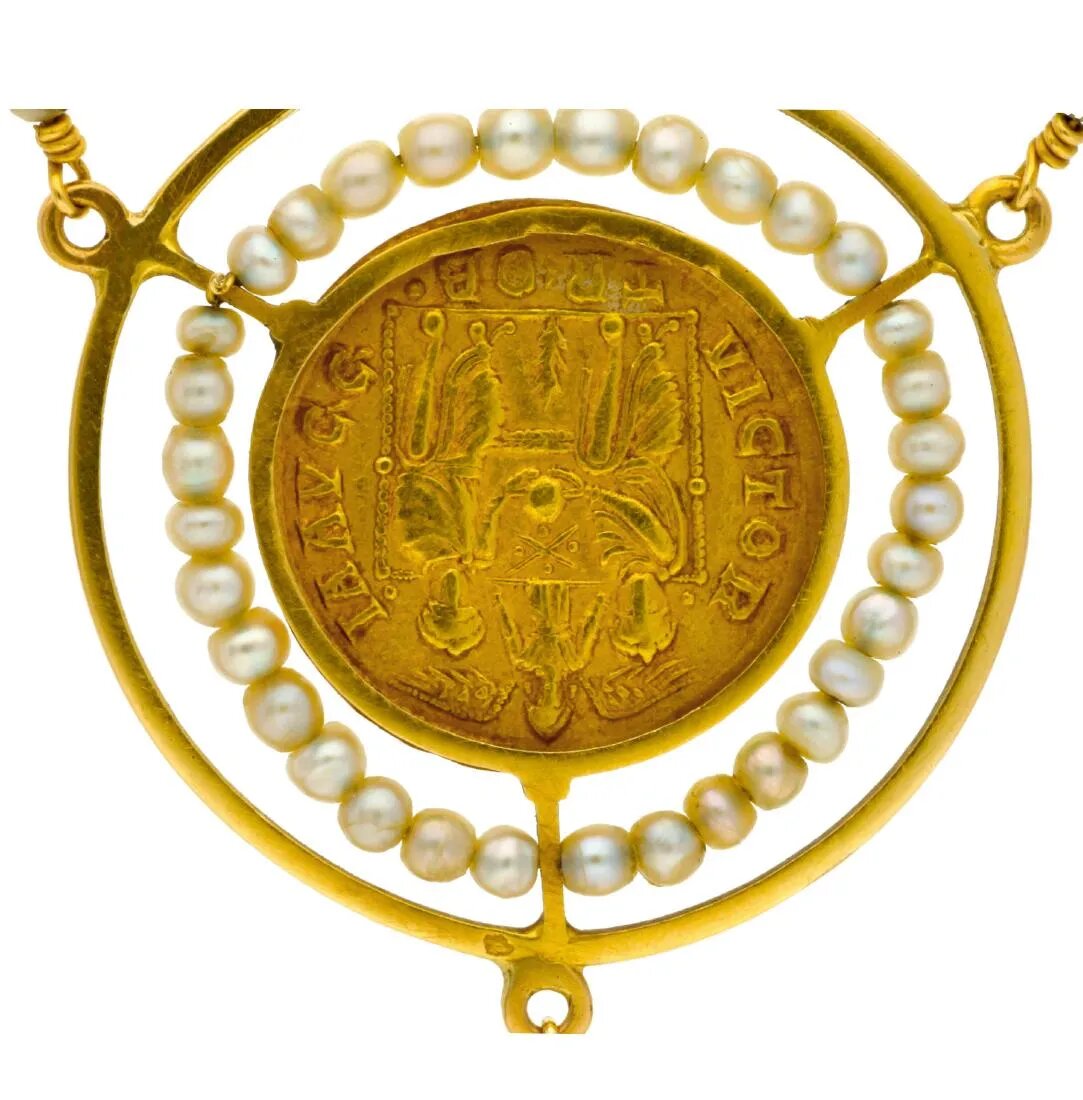 A solidus from the reign of Emperor Gratian (367AD-383AD), mounted on a gold choker and surrounded by sapphire beads and small cultured pearls, sold for €475 (about $520) plus the buyer’s premium in March 2018. Image courtesy of Balclis and LiveAuctioneers

While they are prized for their beauty and historical importance, some ancient Roman coins have investment value. According to a Classic Numismatic Group (CNG) market report in 2019, Roman-era gold was considered by some collectors to be a sort of haven. “This fervor seems to have cooled recently…but expect to see prices rebound over the next few years…,” says a report by Michael Gasvoda on coinsweekly.com. “With gold prices rising incrementally, analysts also see the value of the gold as another avenue for investment.

Yes, you could melt ancient Roman gold coins to recover their inherent value, but most collectors never would. The gold coins of Rome are ambassadors of the art, culture and language of a tumultuous but vanished time, coming to life when held in one’s hand. You can practically feel power and the glory of the empire as you do.