NEW YORK – Ever since the first gold coins were produced in Lydia, in present day western Turkey, in the sixth century B.C., counterfeiters have been at work in what has been called the world’s second oldest profession.

The first gold coins were made from electrum, a natural alloy of gold and silver found in the region’s rivers. The coins typically showed a picture of a lion or bull on the face and a punch mark or seal on the other side. They weighed from 17.2 grams (0.55 troy ounces) to as little as 0.2 grams (.006 troy ounces). The introduction of these coins to the masses is said to have been by the Lydian King Croesus (561-547 B.C.). Improvements in refining soon led to the distinct minting of gold coins.

The detail on this counterfeit 1877 $2.50 Liberty gold coin (left) shows limited sharpness throughout. It was identified and properly represented by the auctioneer as a counterfeit and sold for $190. An original 1877 $2.50 Liberty gold coin is pictured on the right and can sell for twice that amount. Image courtesy Affiliated Auctions, GovernmentAuction and LiveAuctioneers.com

Earlier coinage consisted of ingots of silver before base metal coins were introduced for wider circulation. Pure silver coins were reserved for higher denominations.

The common method for making counterfeit coins has changed little over the centuries. Take a base metal, cover it seamlessly with a precious metal – gold or silver – then die stamp it using a forged engraving of an authentic coin. Then use the debased coin, or fourrée (French for “stuffed”), at face value in regular commercial transactions.

The counterfeiter can also create fourrées by making a clay or ceramic mold of an original coin, then pour the alloy, create the coin, then cover with a thin veneer of precious metal using a “fire gilding” process that involves dissolving mercury to adhere the gold to the base metal. Early silver ingots were also counterfeited the same way. 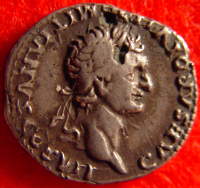 An example of a counterfeit silver clad Roman coin for Emperor Domitian over a copper alloy, called a fourrée, French for ‘stuffed.’ Image courtesy: Wikipedia.com

While counterfeiting can be successful, the penalties for being caught were rather extreme. Besides disrupting trade in general, counterfeiting was considered to be a personal offense against the state and the emporer. During Roman times, for example, a counterfeiter could be sentenced to damnatio ad bestias, loosely translated as being fed to the lions during festival days. Death by hanging for counterfeiters was still common in 17th and 18th century Europe. 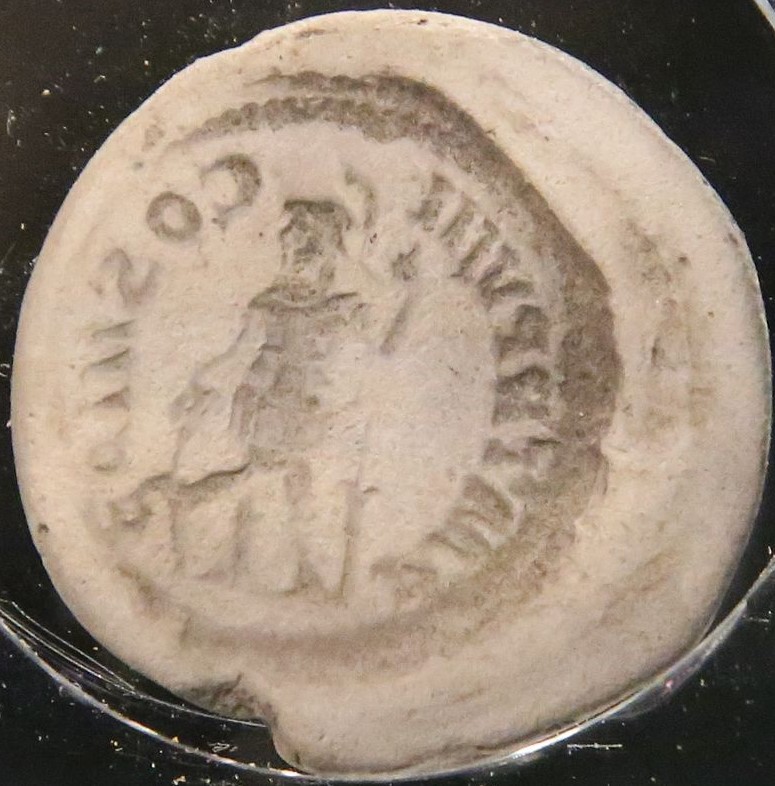 Gold coins are still being counterfeited, according to of industry studies. A recent study of the 50 most commonly counterfeited U.S. coins by the Numismatic Guaranty Corp., an industry grading company, 43 are gold coins of different eras. And that’s a concern for collectors.

While detecting counterfeits is getting easier in the age of electronics, counterfeiting is still a game of numbers. In 2016, Deutsche Bundesbank, the central bank of the Federal Republic of Germany, reported finding 33,000 counterfeit Euro coins, but only 1,570 precious metal ones. This begs the question: How many others did they miss?

For gold coins it’s getting more difficult to know for sure. Counterfeiters have employed science to help. They have found a particular alloy that replicates a similar density of gold as an alloy in the center. They then cover this alloy with a respectable layer of gold and die stamps them with a counterfeit example of the original. The alloy of choice for gold coins is tungsten. Gold and tungsten are close in density. For that reason, a thin layer of pure gold over tungsten is the ideal combination for counterfeiters because the overall weight is very close. Tungsten has a face value of about one-third of gold per ounce, which makes producing a counterfeit cost effective.

So how do you determine if your gold coin is a counterfeit or not? Biting it won’t work. That was something early gold miners might have done to distinguish the soft gold from the hard pyrite, but otherwise has no relevance as a reliable test. After all, if you have a proof gold coin, for example, biting it, drilling into it, carving a piece out of it to examine, or otherwise removing it from its original plastic slab to test would devalue the coin. You could weigh it, but if the scale isn’t properly balanced or doesn’t weigh past two decimal places, it would be hard to detect if an alloy such as tungsten is being used.

The other, less intrusive way is to examine the coin details. Check that the date is consistent with official production records along with its official weight, diameter and thickness. Under magnification small details such as sloppy lettering, the use of a wrong typeface for numbers and letters, misspelled or missing words, unusual or missing design features, rim or edgings that are spaced incorrectly or missing altogether, and other obvious defects like foundry marks will show up clearly. 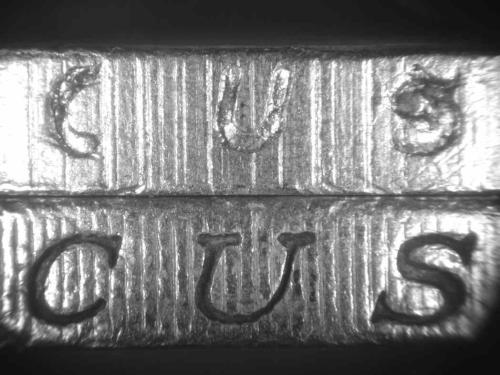 One of the ways to quickly determine a counterfeit is by its details, such as this obviously unskilled attempt to replicate the detail along the rim of a coin. Image courtesy: By Peterlewis and Wikipedia.com

Other more professional methods include a gravity balance test, the use of an x-ray fluorescence spectroscopy using ultraviolet light to measure the electrons, and a device that measures electrical conductivity consistent with gold and any other metals that might be present. All the tests are done with no harm to the coin and usually in their original packaging. Ask a respected local coin or bullion dealer for assistance.

Where are these counterfeit gold coins originating? According to several respected coin and bullion dealers, many of the counterfeit gold coins are being produced in China, among other places. One longtime dealer simply will not accept any gold coins from Iran, for example, knowing that most of their gold coins may be counterfeit. And yet, collecting obvious or suspected counterfeits is another collecting category that can be both a learning experience and an interesting look at the history of gold coinage, without the premium intrinsic value. Even the British Museum has a large collection of ancient and modern counterfeits in its official inventory.

The rule of thumb is to always associate with respected dealers and auction houses when adding gold coins or bullion to your collection. Once a counterfeit is verified, the coin is usually confiscated and destroyed with no recourse for the collector. To paraphrase Forrest Gump, cautious is as cautious does.

The Wheat Penny: rare ones harvest big money
Old Masters to modern art ready to hang in May 8 auction