The one-cent coin that became known as the “wheat penny” was minted in the United States for nearly half a century, from 1909 to 1958. Yet that span of time represents one of the most collectible periods for the penny because of the unusual number of changes to its design.

The 1909 centennial of the birth of Abraham Lincoln generated a great deal of attention from the public and from commercial vendors who were eager to have new coins and commemoratives honoring the beloved president. The Chief Executive at that time, President Theodore Roosevelt, commissioned sculptor Victor David Brenner to create a penny design based on his acclaimed bronze plaque of a right-facing profile of President Lincoln, shown below. 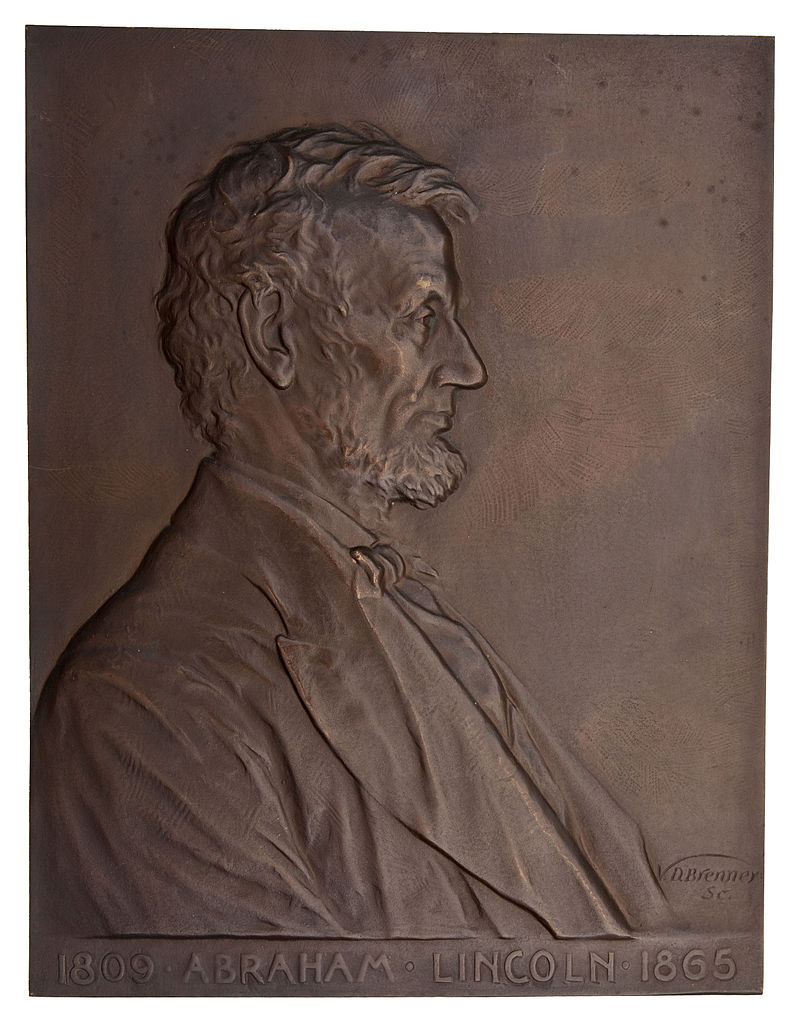 President Theodore Roosevelt was impressed by sculptor Victor David Brenner’s plaque of Abraham Lincoln and commissioned him to redesign the penny in 1908 based on the image seen on the plaque. Image courtesy of Heritage Auctions and available on Wikimedia Commons, licensed under the Creative Commons Attribution 4.0 International license

The debut of Brenner’s penny made history in and of itself. Prior to 1909, allegorical figures such as Lady Liberty or a composite image of a Native American wearing a headdress were the most common elements in American coin design. The wheat penny, boasting the image of Lincoln, represented the first time a real person appeared on an American coin.

But it was the artwork on the reverse side of the penny that prompted its enduring nickname. It was a simple design featuring the words One Cent; United States of America flanked by a pair of curving wheat stalks. Brenner’s artistic flourish almost ensured that the coin would be dubbed the “wheat penny.”

During its five-decade reign, changes in the production of the wheat penny – some major and some minor, some intended and some not – sparked interest that has yet to abate. Its journey shows just how determined collectors are in their quest to locate coins that display quirks, oddities or deviations from the norm.

The Philadelphia Mint issued around 22 million wheat pennies in 1909, making them the most common variety of this mintage. The San Francisco Mint, however, issued only about 484,000 wheat pennies in that inaugural year, identifiable by the “S” mint mark and “VDB” (representing sculptor Victor David Brenner’s initials) on the reverse. The initials stirred controversy because of their prominent appearance on the coin, and ultimately mint officials decided to remove them. The letters would not return until 1918, and once reinstated, they remained part of the coin design until its discontinuation. The relative scarcity of the San Francisco Mint 1909 wheat penny makes it one of the most valuable pennies minted that year, and a 1909 S that lacks the “VDB” is a rare prize, indeed.

In 1911, the Denver Mint began striking the wheat penny with the mint mark “D,” joining mints in San Francisco (S) and Philadelphia (which did not use a mint mark) in producing the coin. D pennies from 1914 are among the lowest-circulated wheat pennies, making them a favorite among collectors and auctioneers, and, unfortunately, counterfeiters.

Wheat penny completists make a point of obtaining a 1916 example of the coin. In that year, a slightly different die was used for the Lincoln portrait, which sharpened some of the facial features such as his cheek and part of his coat.

Some examples of the 1917 wheat penny are affected by what is known as a “double-die strike” – an occurrence in which two impressions of the die overlap enough to cause a noticeable error. In this case, the word “Trust” and the date are marred. Production flubs such as these generally make a coin more valuable.

Another favorite from the Denver Mint dates to 1922, a year when the city’s mint was the sole manufacturer of the wheat penny, yielding 500,000 for the nation’s needs. Some 1922 specimens feature a faint “D” mint mark or don’t have a mint mark at all. Naturally, they turn the heads of collectors, but care must be taken – would-be owners will want to confirm the mint mark was not deliberately removed.

The 1931 S wheat penny was the only one issued that year due to the impact of the Great Depression. It had a rather low mintage, and most of the coins were held in US Mint vaults due to low consumer interest. For this reason, 1931 S specimens are more like proof coins – the highest quality grade of coin issued by the mint. (Proof coins are struck twice instead of just once like regular coins. The extra strike gives the coins a much shinier, cleaner-looking finish and makes the fine details of the design pop. Most proofs can be identified by their mirror-like background.)

1936 brought the issuance of one of the first proof wheat pennies, except it had a satin finish that gave it an uncirculated appearance. A second strike was issued with a more brilliant finish. Both versions are sought after by collectors.

This 1943 copper wheat penny sold for $220 plus the buyer’s premium in January 2020 at Rare Treasures in Harrisburg, Pa. Image courtesy of Rare Treasures and LiveAuctioneers

The 1940s are notable for producing the greatest variety of wheat pennies and the most error-strike coins. To reserve copper and tin for wartime needs, a zinc-coated steel wheat penny was issued for 1943 instead of the usual copper ones (which also included zinc and tin). About one billion were minted, making this issue not particularly valuable. However, a few dozen copper 1943 wheat pennies were struck from 1942 copper planchets, and these particular 1943 coins are extremely collectible.

Not surprisingly, the 1943 copper wheat penny is often forged. A favorite technique for producing a bogus specimen is removing the left side of the number “8” from a 1948 copper penny, or electroplating a 1943 steel penny with a thin layer of copper to pass it off as a full-copper issue.

Also notable are 1944 copper wheat pennies with the “S-over-D” flaw. Some pennies minted in 1944 in Denver somehow ended up with an “S” mint mark, forcing the stewards of the mint to mechanically remove the “S” and replace it with a “D.” This type of error coin typically sells well at auction. 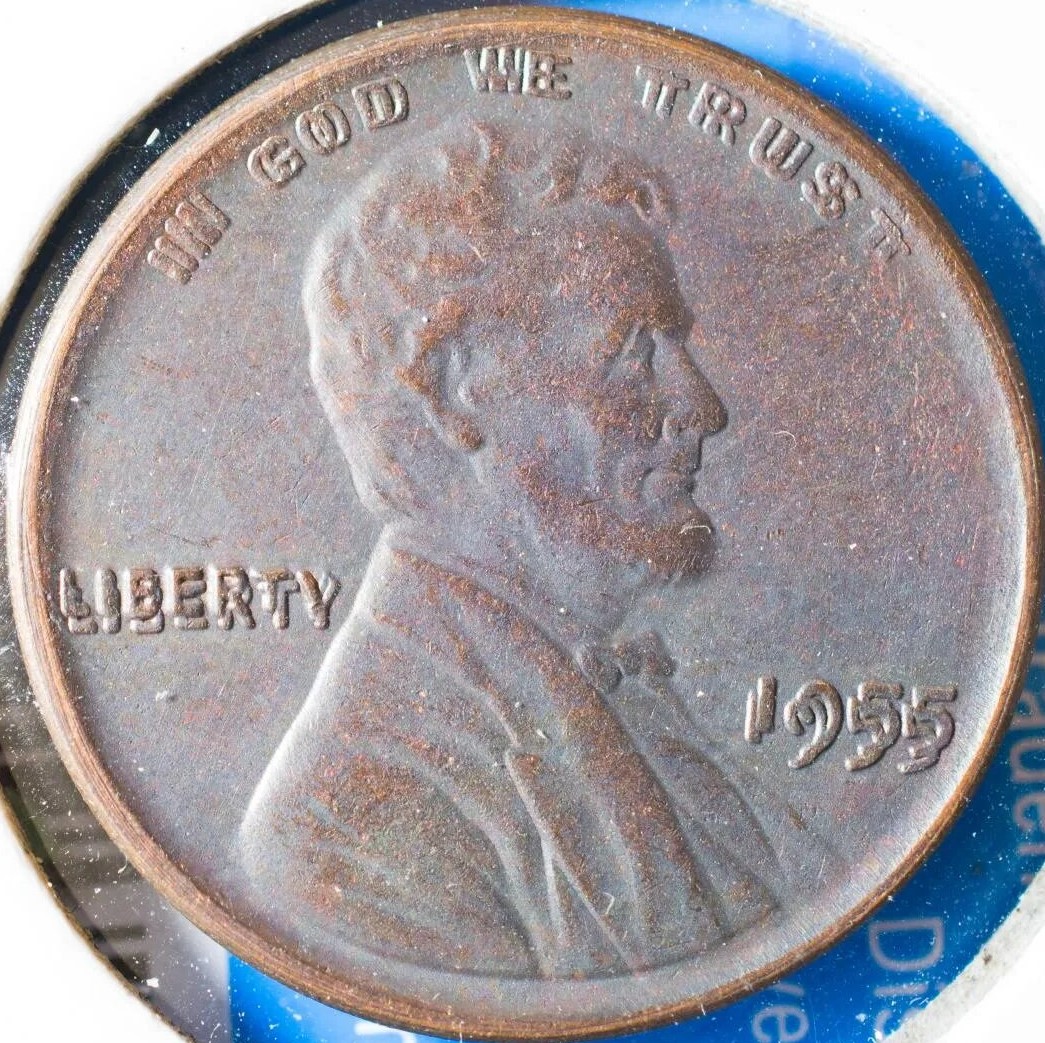 The final decade of the wheat penny was relatively quiet, yielding few variations of note. One worth discussing is the 1955 double-die wheat penny, an error coin that displays the “shadow” appearance produced when a coin is accidentally struck twice with the same die. The effect is most visible in the motto “In God We Trust,” the date, and the word “Libert”’ on the obverse, or back, of the penny. Because of its notoriety, many counterfeits are sold to dealers and collectors and consigned to auctions.

What we’ve discussed here are just the better-known varieties and errors of the wheat penny. The full range of variations and subtleties would keep a completist busy for a lifetime and beyond. As with most collectibles produced in massive numbers, condition comes first and foremost. The crispness and legibility of the date, the motto, the Lincoln profile, and the overall appearance of the coin affect a wheat penny’s value. So, too, do smaller details, such as the raised rim, the quality of the strike, the weight and composition of the coin, and the number of examples in circulation.

All production information for each wheat penny is available for public review at usmint.gov. Connect with other collectors online at the American Numismatic Association’s website: money.org.

The seemingly endless campaign to eliminate the one-cent piece from America’s currency will succeed at some point in time. Until then, it’s wise to stop and swap at the “take a penny, leave a penny” tray when you’re out shopping. A variety or error wheat penny just might be your reward.