James Abbott McNeill Whistler is famous for his 19th-century painting Arrangement in Gray and Black, commonly known as Portrait of the Artist’s Mother, but he was by no means a one-hit wonder.

In fact, more than a decade before the American-born and the England-based artist painted the portrait of his mother in 1871; he began creating what many deem one of his most important contributions to art: his etchings.

Born in Lowell, Massachusetts, in 1834, his appreciation and talent for artistic expression had an apparent calming effect on the youthful Whistler, whose temperamental behavior was evident at an early age. Not only were his natural talents recognized, but they were also encouraged while his family resided in St. Petersburg, Russia. During this time Whistler’s father served as an engineer aiding in the design of a railroad. Eleven-year-old James Whistler became a student at the Imperial Academy of Fine Arts in St. Petersburg. 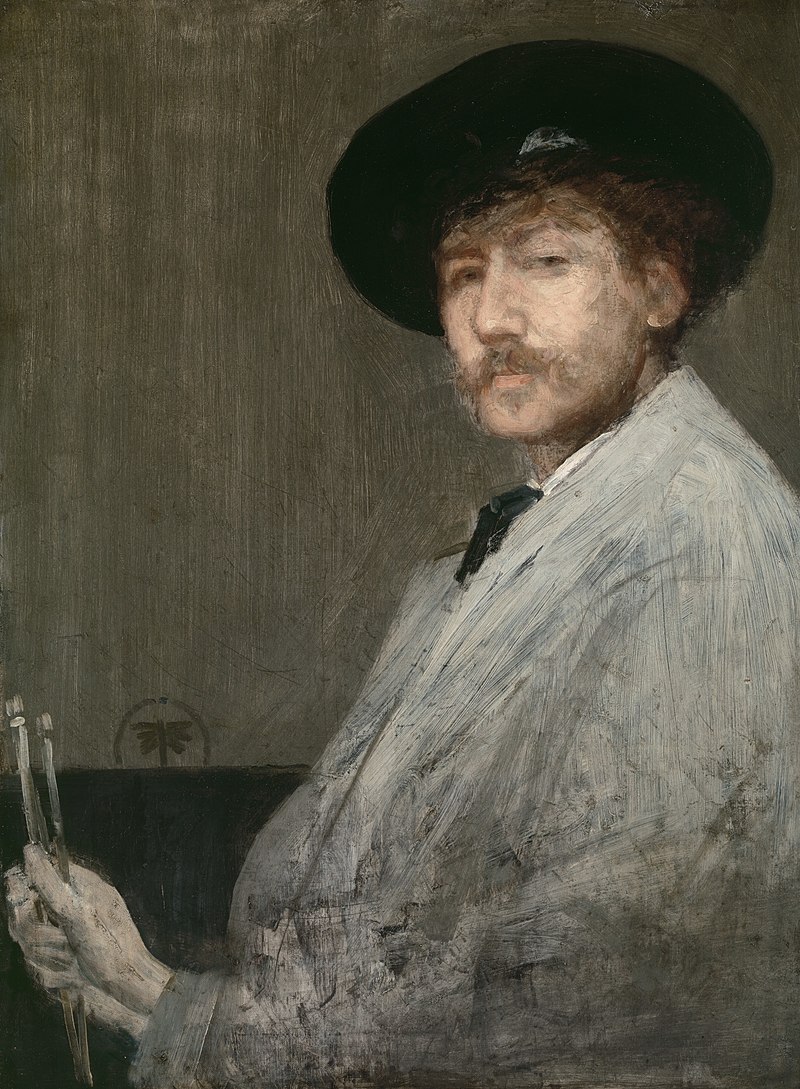 Alas, his opportunity to study the subject of his passion was cut short, after only four years, following the death of his father from cholera. With the elder Whistler deceased, the family was forced to return to the United States.

Lesser-known fact: At the age of 18, Whistler joined the ranks of cadets at the United States Military Academy at West Point. Temperament and academic struggles led to his early exit from West Point. However, his introduction to cartography at the academy would result in work as a draftsman and the discovery of etching, a skill that would serve him well throughout his life.

At the age of 21, Whistler left the United States, where his devoutly religious mother and siblings resided, opting instead to settle in Europe. He would never return to the U.S., instead, he made his permanent residence in London, with frequent visits to France. However, his mother spent considerable time with him in Europe during 1871 while sitting for her son as he created his famous portrait of her. 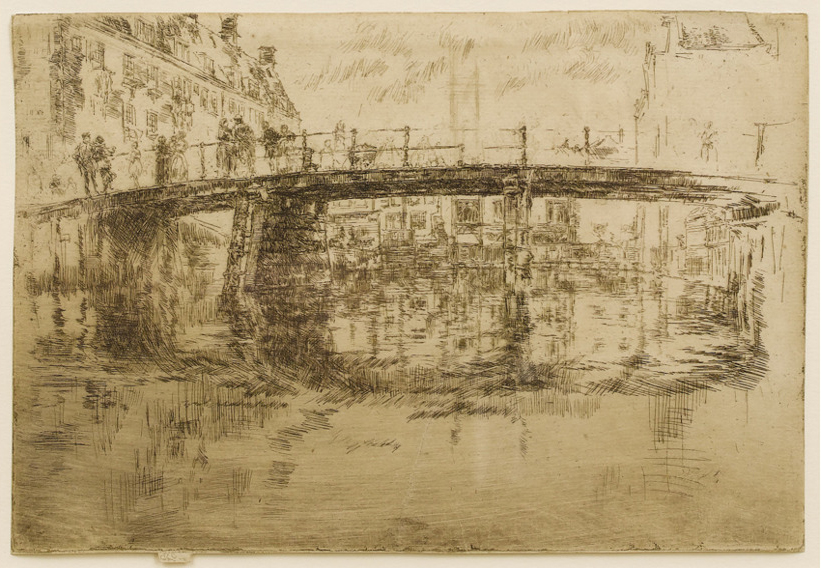 ‘Bridge, Amsterdam,’ etching, 1889, James Abbott McNeill Whistler, signed in pencil on tab at lower left with butterfly monogram and imp. And inscribed on verso at the right in the artist’s hand ‘1st proof pulled’ together with butterfly monogram, 6 ½ in. x 9 ½ in. Sold for $125,475 during a 2007 auction at Heritage Auctions. Heritage Auctions image.

His years in Europe included befriending several artists who would go on to experience great success as well. Among those were Henri Fantin-Latour, Gustave Courbet, Claude Monet, Camille Pissarro and Edgar Degas. Finding inspiration and influence in a variety of cultures, Whistler is reportedly among the earliest artists of the Aesthetic movement. From this ideology, the theory of creating “art for art’s sake” emerged.

During the mid-19th century, Whistler traveled through northern France, a trip that prompted him to create his first set of etchings titled Twelve Etchings from Nature, more commonly referred to as the French Set, according to information from the University of Glasgow website. After returning to London, while living near the bustling seafaring region of the River Thames, he created a set of etchings featuring the day-to-day happenings, including the activity of ships and barges docking and departing, and fisherman and dock workers tending to duties, all set against London’s architecture. These works would form Sixteen Etchings of the Scenes on the Thames. 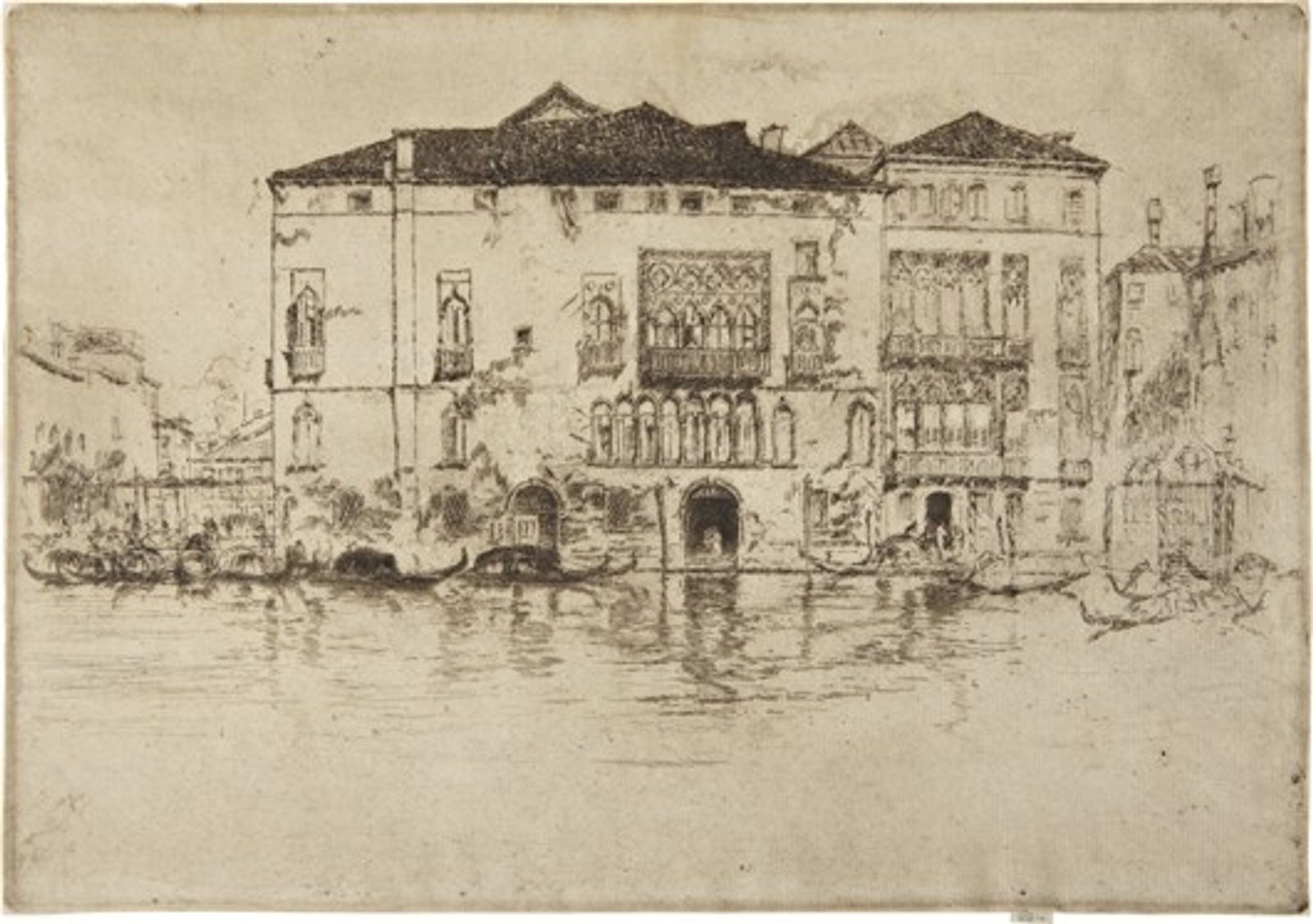 ‘The Palaces,’ etching with plate tone, on laid paper and trimmed to the platemark by the artist, 1879-80, signed with the butterfly and inscribed ‘imp’ in pencil on tab at lower right, annotated by Whistler with three tiny circles in pencil on the reverse, 9 15/16 in. x 14 ¼ in. Sold for $26,000 at auction in April of 2011. Phillips and LiveAuctioneers image.

In 1879, working on a commissioned assignment for the Fine Art Society, Whistler spent little more than a year in Venice, creating art inspired by the scenes of the Italian mecca. Among his works were 90 pastels and 50 etchings, including those that formed the Venice, a Series of Twelve Etchings set. In producing these etchings, it’s reported Whistler treated it as an opportunity to experiment with various types of ink, paper and the formation of composition, according to information obtained from the University of Glasgow website, which oversees the “James McNeill Whistler: The Etchings Project.” 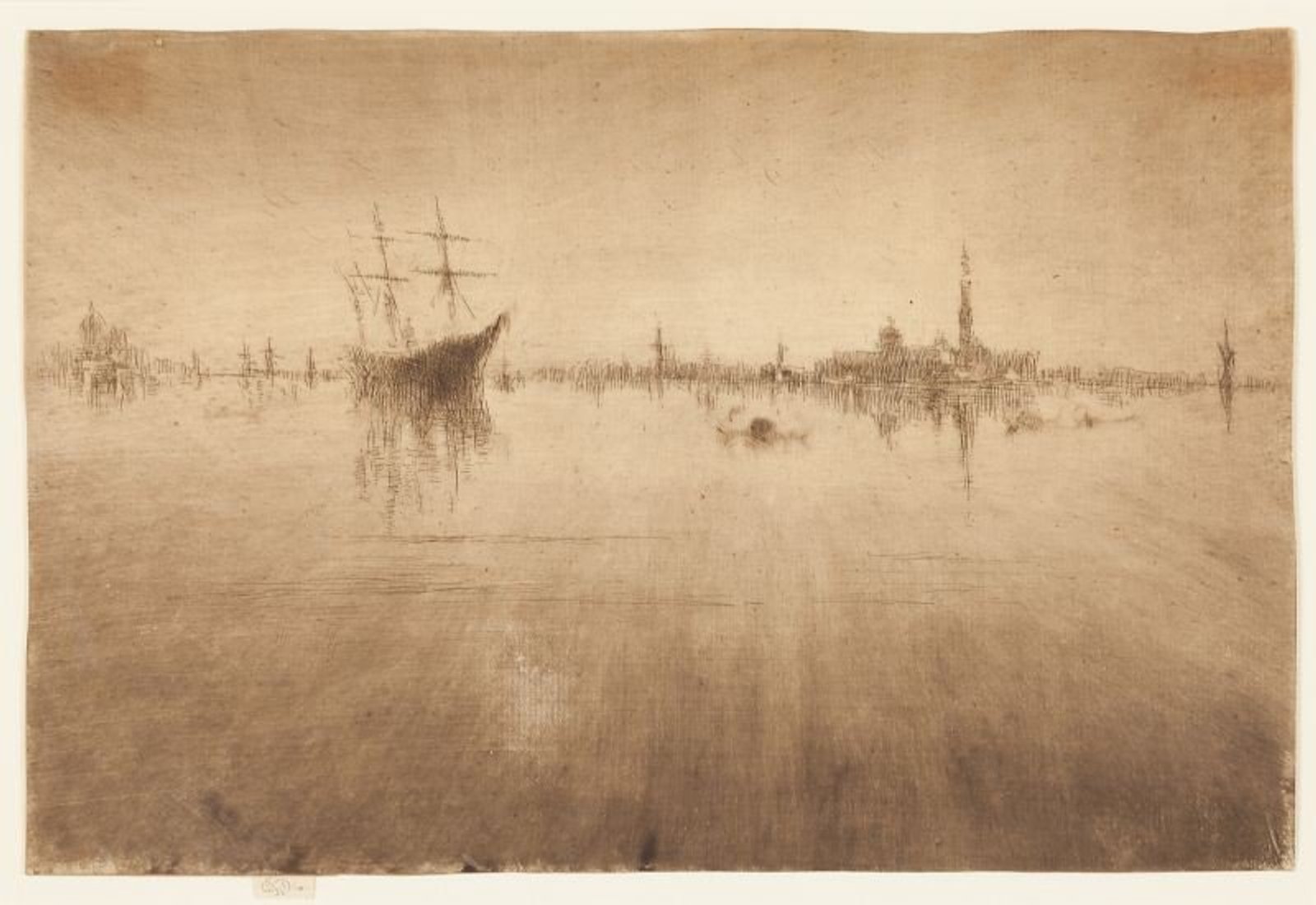 ‘Nocturne,’ etching and drypoint on cream paper, from ‘The First Venice Set,’ trimmed by the artist with signature on the tab in lower margin, 8 in. x 11 5/8 in. Sold for $15,500 during a December 2012 auction. Leland Little Auctions and LiveAuctioneers image.

Yet, as history reveals, not all of Whistler’s artwork, and in some instances, his demeanor, was met with favor. In a well-documented lawsuit, Whistler sued British art critic John Ruskin for libel regarding his review of Whistler’s piece Nocturne in Black and Gold: The Falling Rocket. While Whistler was successful in his suit, the judge awarded only a nominal amount be paid, and far from the expense Whistler incurred proceeding with the court action.

Also, it’s reported Whistler’s brother-in-law, Sir Francis Seymour Haden, a masterful etcher in his own right, also influenced the early development of Whistler’s use of the medium of etching, according to an article posted on Skinner Inc.’s website. However, it’s also reported a long-standing feud between the two men developed. 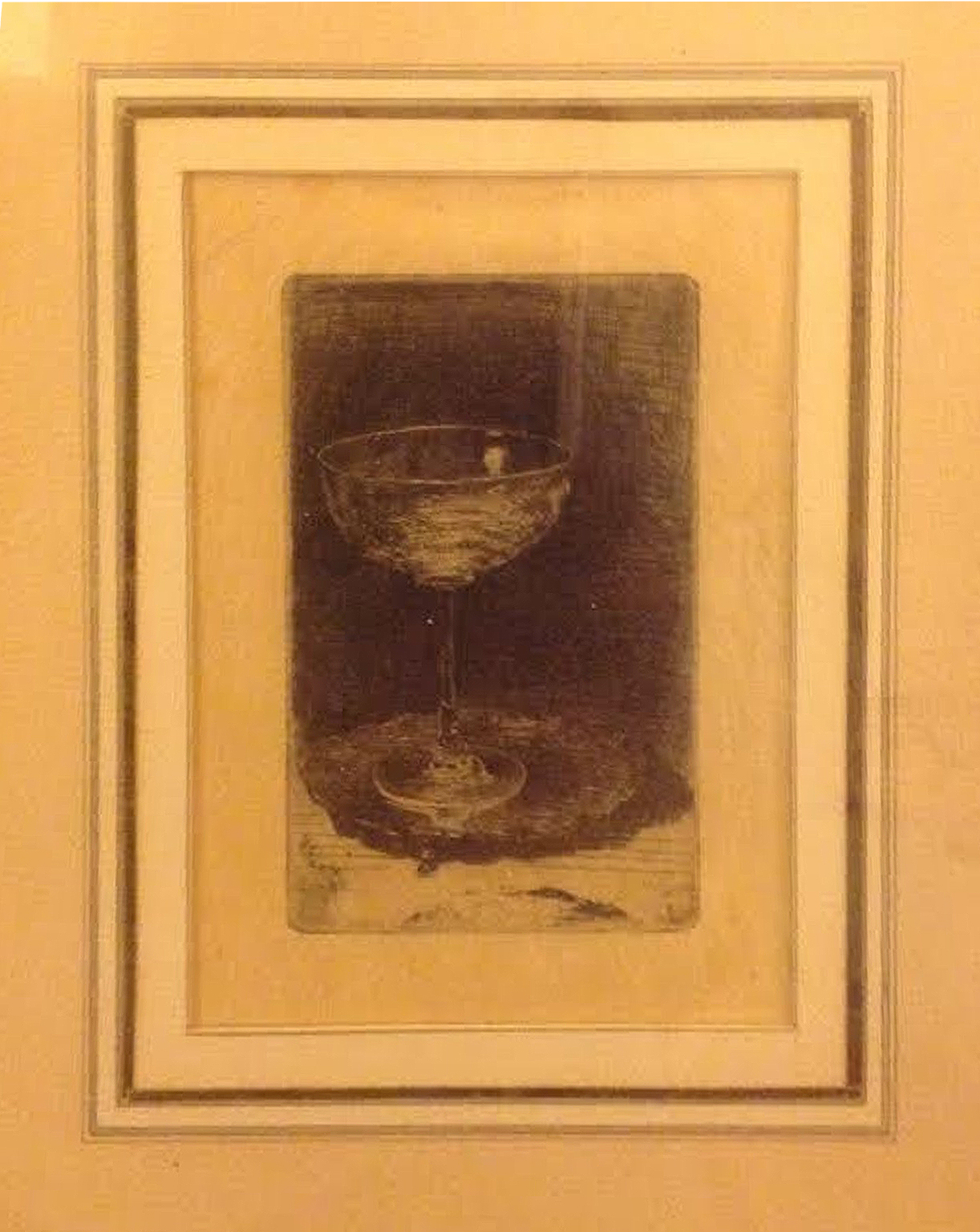 Lesser-known fact: Whistler’s legacy also includes published writings. His presentation Ten o’clock: a lecture, initially given in 1885, was an hour-long discussion about art. Also, The Gentle Art of Making Enemies, published in 1890, came on the heels of his lawsuit against Ruskin and discusses the case, and calls for a more progressive awareness regarding art.

Whistler created art up until his final days, before his death in the summer of 1903. His work, innovative creativity, uncommon character and outspoken commentary regarding the importance of embracing evolving artistic notions continue to speak to historians, artists and collectors around the world. 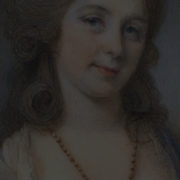 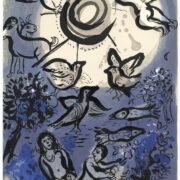