NEW YORK – A fine cigar is the only collectible that, if done right, should go up in fragrant smoke that imparts a satisfying flavor, warmth and personal enjoyment.

Turns out, though, that collecting cigars isn’t much different than collecting fine wines. Each has their rarities, exclusiveness and the ability to be enjoyed in the company of friends while also being a unique piece of art with investment potential. But what makes a fine cigar worthy of such special attention? 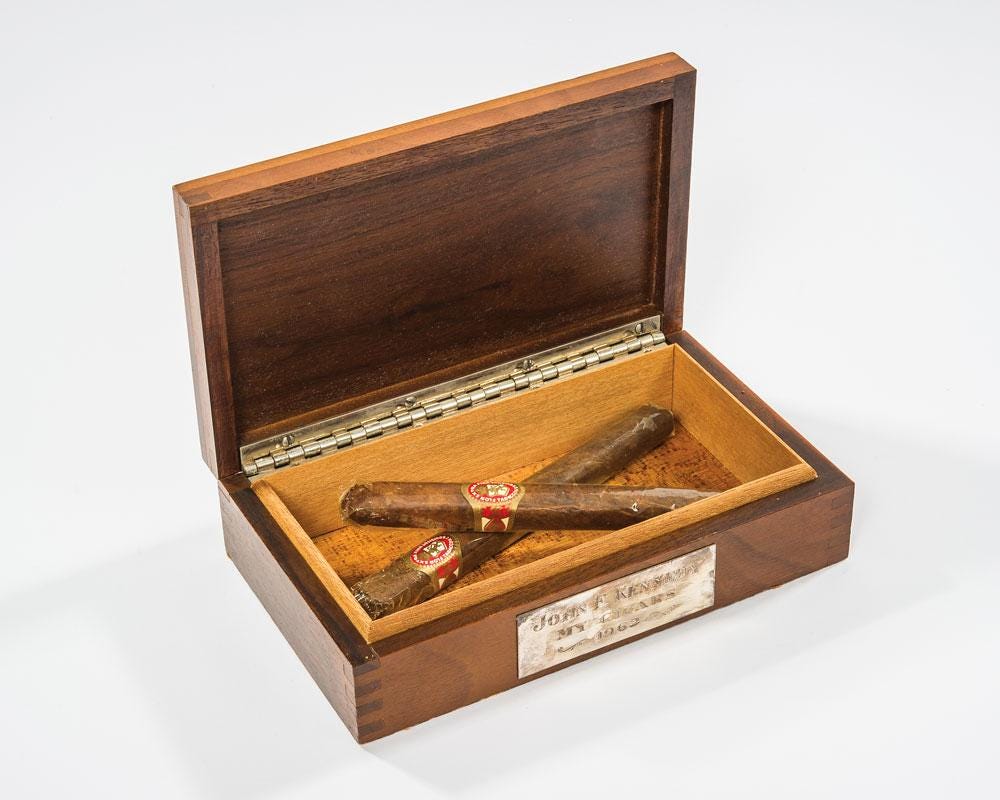 Where fine tobacco comes from

More of a mystical plant cultivated for thousands of years, tobacco was originally a staple crop in the Caribbean and South America used mostly in ceremonies and as a medicinal plant. The word tobacco is probably from the Arawakan Taino word tabaco meaning “roll of tobacco leaves.”

That changed when Christopher Columbus visited the Caribbean islands in 1492. He was the first European to be introduced to tobacco and the first to export it to Europe for resale as a cash crop rather than for medicinal purposes. From there, tobacco was eventually introduced by explorers throughout the known world.

Over the centuries, the development of tobacco resulted in two types, flu-cured (low nicotine, high sugar content) and burley (high nicotine) with both requiring nitrogen or nitrate occurring either naturally in soil or added with fertilizer to make sugar, cellulose and nicotine. “Without nicotine in the tobacco plant, it would have virtually little or nonexistent commercial use,” according to Jeffrey Wigand, a biochemist and a former vice president of the Brown & Williamson Tobacco Corp.

No matter whether it is commercial or artisanal tobacco, all tobacco plants are first grown from seed in a greenhouse for about a month. Then, after a month, the plants are transplanted into fields where they will grow to maturity.

Once picked the leaves are dried for up to 60 days, sorted, dampened and allowed to dry in piles to ferment for another three months with the process repeated one more time before being sent to be graded, bundled and made into cigars. The process from greenhouse to cigar takes about two years. 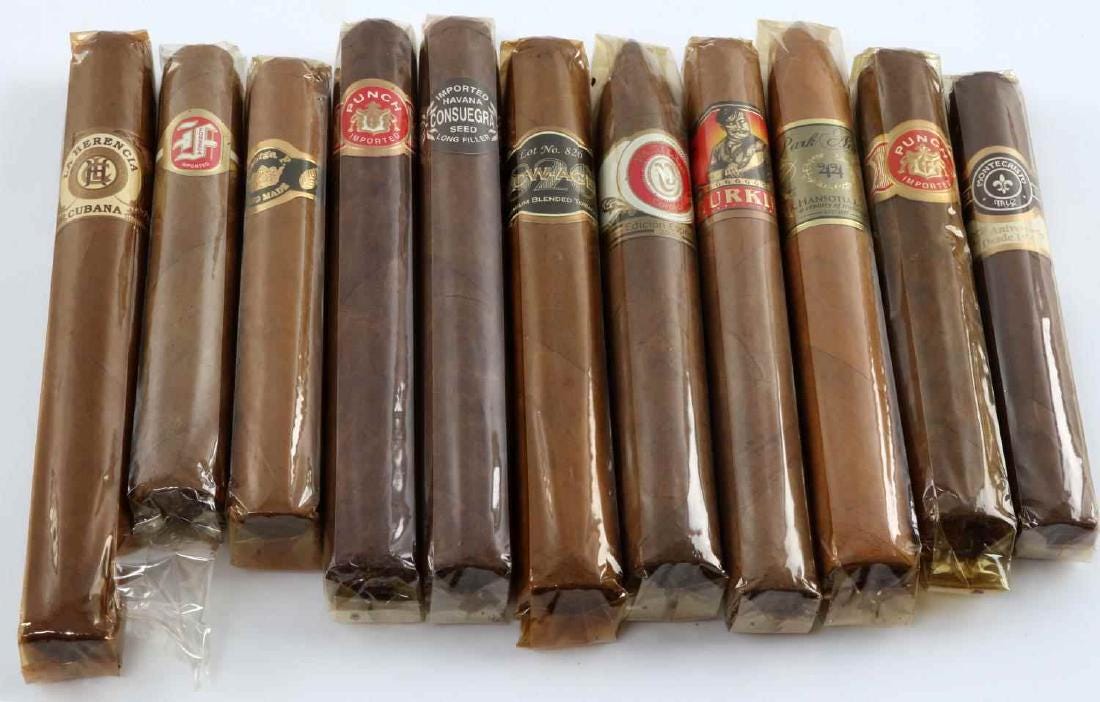 A cigar collection need not be expensive to start, especially with vintage mix of Cuban and Dominican Republic cigars such as this collection of 11 cigars in different sizes and distinctive shapes that sold for $90 + the buyer’s premium in 2019. Image courtesy Affiliated Auctions and LiveAuctioneers

Derived from the Mayan word sikar meaning “to smoke rolled tobacco leaves,” the English word “cigar,” which is derived from the Spanish cigarro, was introduced in 1730.

Since then, handmade cigars have had three main components: the outside wrapper (capa), the binder underneath (capote) and the filler (velado, seco, and ligero leaves).

The buncher (bonchero) begins by rolling different filler leaves called long fillers because, unlike processed cigars, each filler is a full leaf, never cut, to create a unique blend of flavor. The filler is then wrapped with a binder leaf compressing the filler leaves together, not too loose and not too tight to allow for easy airflow. The completed bunch is then handed to the roller (torcedor).

The roller places the completed bunch into a cigar mold that is stacked and weighted down until the bunch is evenly compressed into proper tubes. It is then ready for the wrapper, the final step.

The wrapper leaf is specially grown in shade to maximize overall smoothness, color, flexibility and taste. During production, the stem and vein of the wrapper leaf are removed leaving a left and a right-side leaf. The skill of the torcedor is evident in the cutting and rolling of the outside wrapper leaf (rolling either left or right depending on the leaf) using only a curved blade known as a chaveta. A rounded cap is glued with gum arabic at the end of the cigar, a signature mark of an experienced torcedor.

Lastly, a stack of 50 handmade cigars is bundled and aged together. After aging they are individually tagged with a paper band and placed in specially crafted boxes for shipment. 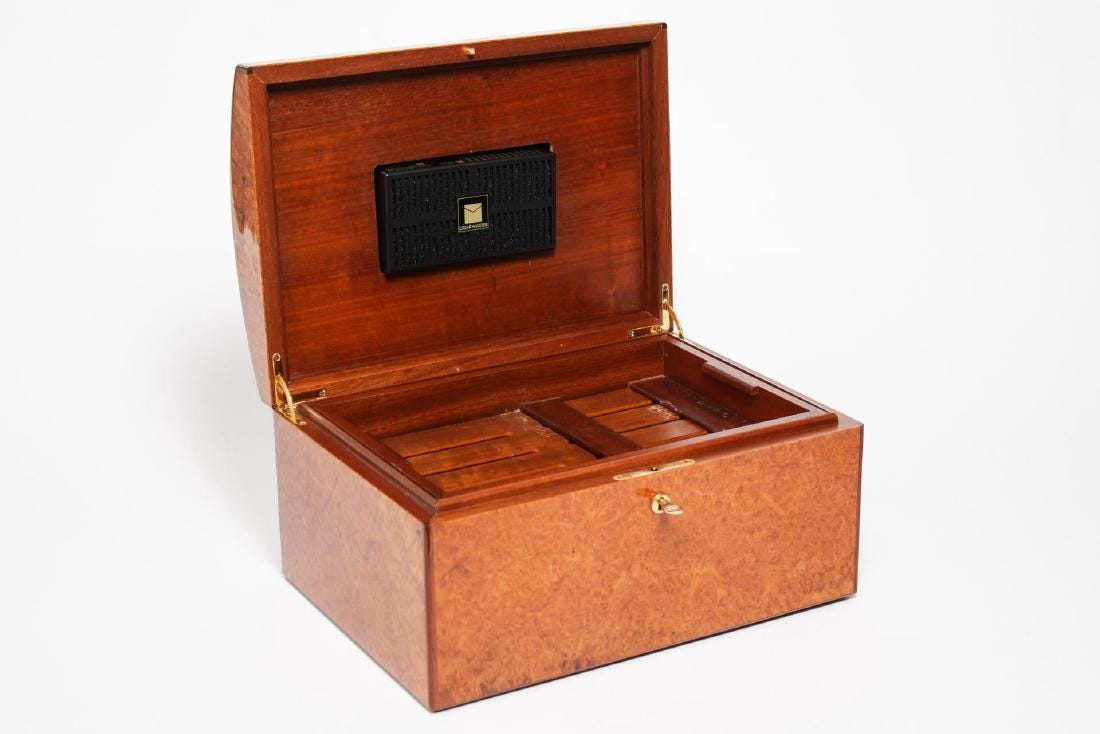 Nothing is more important to age a cigar properly than a humidore, such as this vintage burlwood roll-top Cigar Master humidor complete with a ‘self-regulating humidification system’ that keeps cigars at no less than 70% humidity and always near 70°F (21°C). It sold for $400 + the buyer’s premium in 2018. Image courtesy Auctions at Showplace and LiveAuctioneers

What to look for

Premium handmade cigars are generally measured by their ring gauge (its diameter in millimeters) and its length measured in centimeters.

The most common cigar shape is the parejo, otherwise known as corona, that are round, have even sides (no figural shapes) with an open end on one side and a covered ‘cap’ on the other that needs to be cut off or punched through before smoking. Altogether there are at least 19 different standard versions of parejo cigars ranging from the very small cigarolla measuring less than 8mm in ring size (a third of an inch) and 8cm (about 3 inches) in length (which are found in boxes of eight or so) up to the Double Toro measuring 24mm in ring size (shy of one inch) to 15cm in length (6 inches) bought individually or in large gift boxes.

For collectors, the figurado is the most desirable. Made in irregular shapes from the traditional parejo could mean a perfecto that is narrow at the base and the tip, but bulged in the middle to the pyramid that has a broad foot, but narrow at the tip. Figurados were more popular in the 19th century until about 1930 when they fell out of favor. Arturo Fuente, a prominent cigar maker in the Dominican Republic, occasionally makes figurados in the shape of American footballs, chili peppers and other shapes that are prized by collectors.

Smaller cigars such as the cigarillo and small, filtered cigars bought in packs like cigarettes since the 1940s are machine-made and not considered collectible.

Collecting premium handmade cigars isn’t complete without a reference to where it all started – on the Caribbean island of Cuba.

The Spanish saw the potential marketing of tobacco in Europe after Columbus visited the area in his voyage of 1492. Tobacco plants, known as cohiba by the early inhabitants, didn’t survive the trip to Europe very well, but rolled cigars did. So, the Spanish outpost on the island of Cuba became the first cigar factory in 1542.

Because of the perfect soil, humidity and weather conditions, Cuba is still considered a prime producer of handmade cigars. However, over the centuries, Honduras, Nicaragua and the Dominican Republic all have gained prominence equal to Cuba in cigar production due mainly to the original tobacco plants that began with seeds from Cuba.

It’s well known that many presidents, prime ministers and entertainers smoked cigars. President John F. Kennedy, for example, routinely smoked hand-rolled Cuban cigars until 1962 when all imports from Cuba were embargoed, but only until after he was given 1,000 Cuban cigars for his personal use. These cigars continue to be featured in auctions from time to time.

The personal cigars of Presidents Ronald Reagan and Bill Clinton also occasionally come to auction along with cigars from the personal collection of Prime Minister Winston Churchill (one of his half-smoked cigars brought near $12,000 at RR Auctions in 2017). 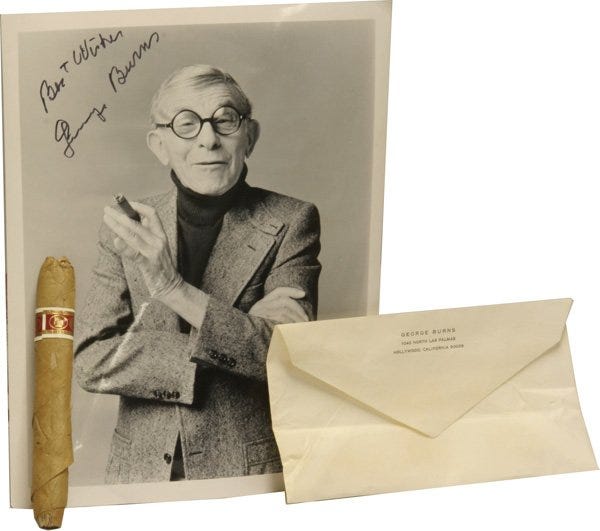 Another famous celebrity cigar aficionado was comedian George Burns who gifted one of his cigars and a signed photo that together sold for an affordable $40 + the buyer’s premium in 2006. Burns, who died at age 100 in 1996, once said, “I’m at the age now where just putting my cigar in its holder is a thrill.” Image courtesy Randy Inman Auctions Inc. and LiveAuctioneers

Mid-century comedians George Burns, Jack Benny, Groucho Marx and actress Marlene Dietrich all routinely smoked cigars throughout their professional lives, usually as a part of their act. “I smoke 10 to 15 cigars a day,” said George Burns who lived to be 100. “At my age I have to hold on to something.”

According to Mitchell Orchant, managing director of C.Gars in London in a recent article How to Collect and Age Vintage Cigars at cluboenologique.com, these “… cigars from the 1940s and 1950s are particularly popular at the moment …” Of course, the celebrity helps, too.

Not just the cigar

A distinctive handmade cigar can be aged, or laid down, over decades like fine wine. The secret is to keep the cigars in an atmosphere of no less than 70°F (21°C) and 70% relative humidity.

To accomplish that, cigars are stored in specially constructed enclosed boxes, usually made of wood, called humidors, that are fitted with hydrometers to maintain proper humidity levels. This helps to age the cigars in a constant temperature over a long period of time.

When traveling, a travel case of leather, silver or even wooden traveling cases serve as a portable humidor to protect the cigars from the vagaries of weather, sunlight and changes in humidity. Most have a limited capacity of just a few cigars, called fingers, and fits easily into a jacket pocket, briefcase or hand luggage. Many vintage humidors and traveling cases are routinely sold at auction in distinctive sterling silver or even exotic animal leather. 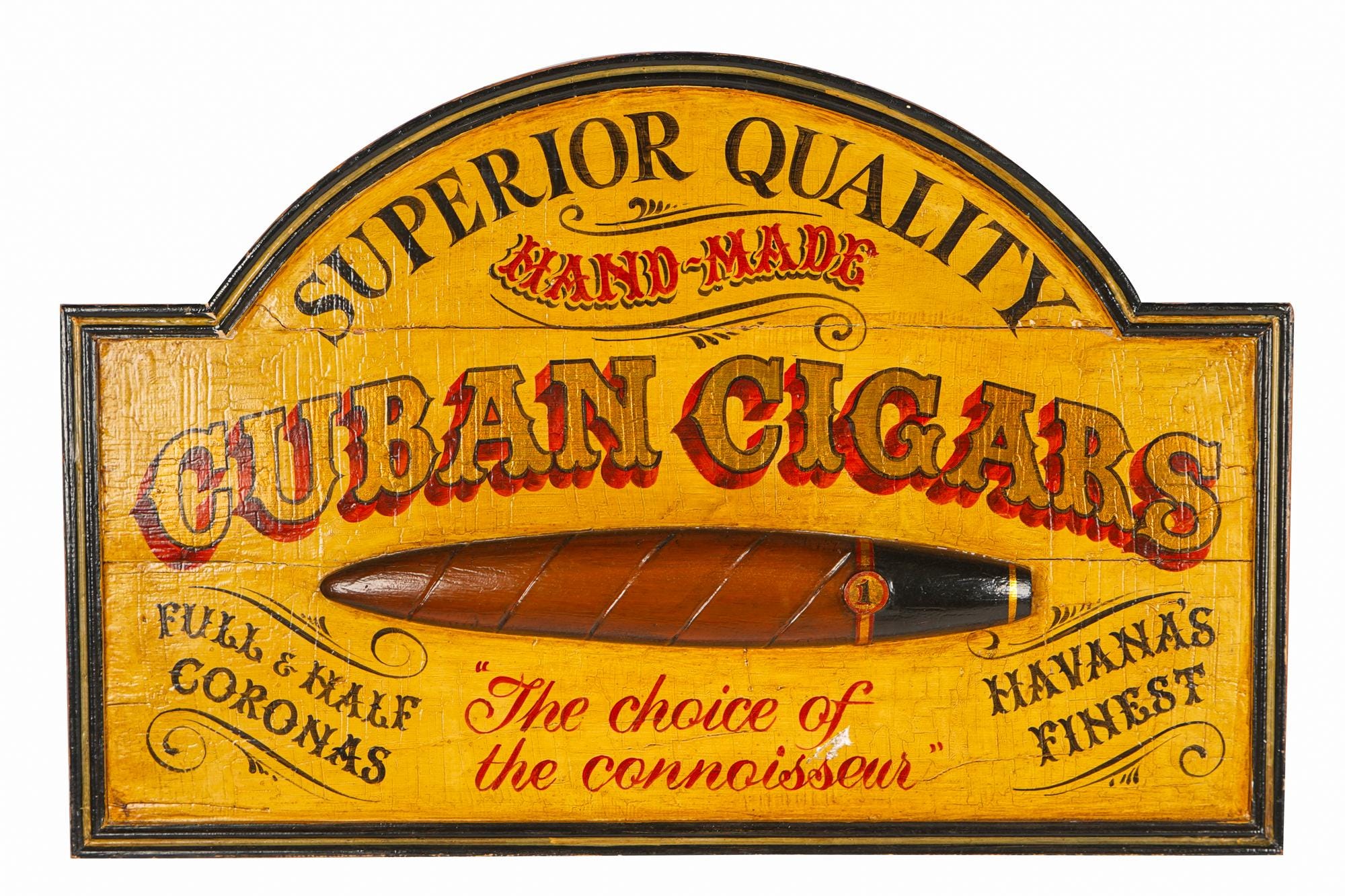 It’s known that the use of tobacco results in health issues over time no matter its form. Smoking cigars may have different health issues than cigarette smokers, but the warnings are still relevant. The key, of course, is what Mark Twain was to have said, “I smoke in moderation. Only one cigar at a time.”

Whether to celebrate a birth, a special occasion or even the New Year, a cigar hecho a mano totalmente (made totally by hand) is indeed a pleasurable way to pass the time with friends, family and community – one puff at a time.