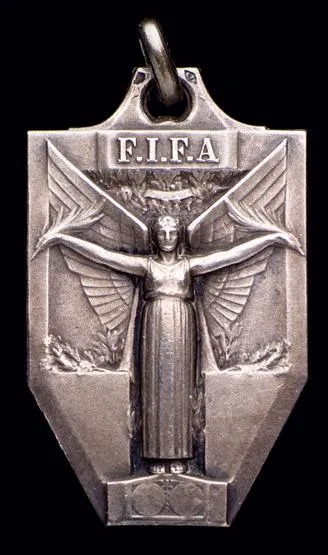 This original 1934 World Cup runners-up medal, awarded to the Czechoslovakian player Josef Kostalec, features the figure of Victory that also appeared on medals awarded to World Cup finalists in 2018. This early medal, sans ribbon, earned £9,500 (about $11,175) plus the buyer’s premium in November 2019. Image courtesy of Graham Budd Auctions Ltd and LiveAuctioneers

World Cup soccer is a phenomenon like no other. It’s one of the few events with the power to bring together more than half the planet’s population for one month. According to some news stories, the World Cup wields so much power, it has brought about ceasefires in the bloodiest of conflicts. Entire nations feel a great sense of pride when their team advances or wins any of the 64 games that culminate with the hoisting a heavy vermeil trophy designating the world’s best players. A pair of soccer boots worn by Argentine player Rene Houseman in the 1978 World Cup final between his country and Holland, signed by him in silver marker, sold for £460 (about $545) in June 2019. Image courtesy of Graham Budd Auctions Ltd and LiveAuctioneers

Soccer, or something like it, has been played for millennia. A Chinese game known as “cuju,” which was described in writings around 206 B.C., involved kicking a ball into a net. The sport began to evolve into its current form in 1863, following a series of meetings held in England that led to the creation of the Sheffield Rules, which prohibited the most aggressive and injurious tactics in official matches. Not long after this decree, the game split into two related but separate sports. Soccer, which is officially known as football everywhere on Earth except the United States and Canada, adopted the less aggressive laws of the game, while rugby, which is named for Rugby School in Rugby, England, where its rules were codified, retained the rougher style of play. 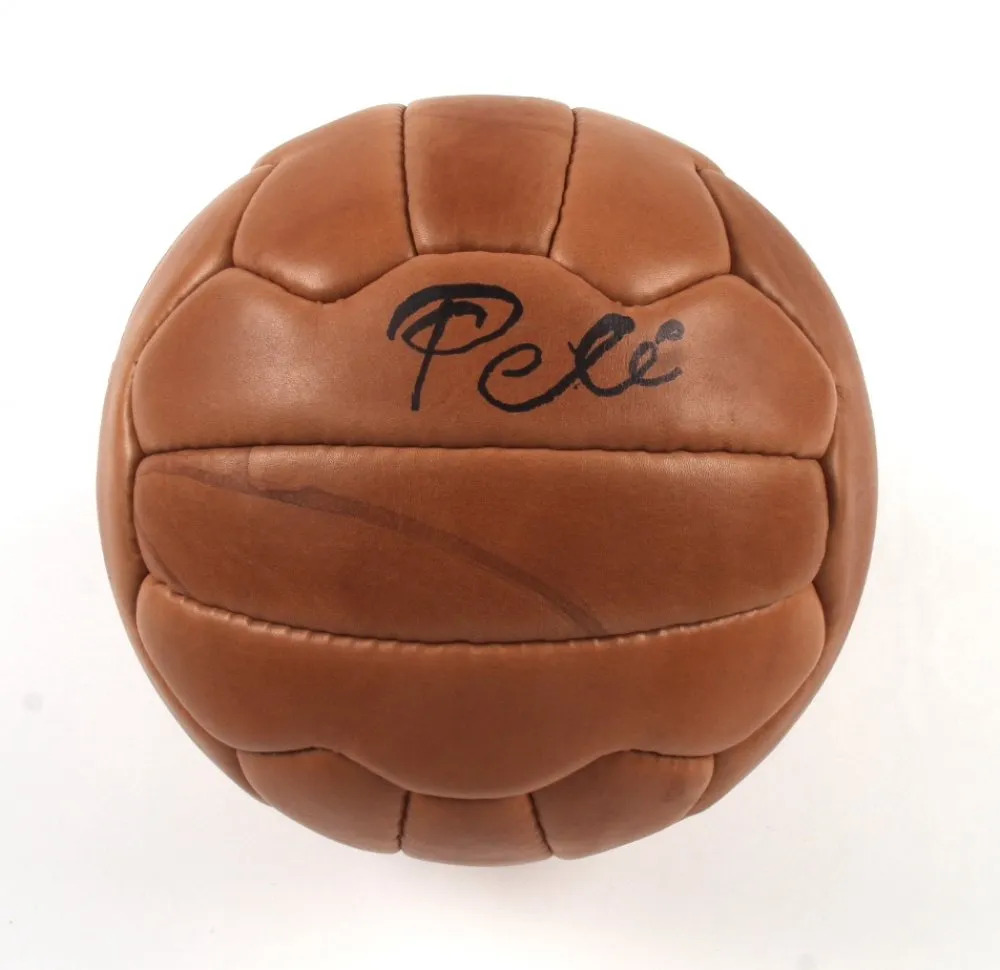 Nothing says soccer like a dark brown leather soccer ball from the early 1950s such as this one, which predates the current white and black hexagon pattern design that makes the ball easier to see on the field. The signature of Pele, the greatest player of the 20th century, helped the ball earn $500 plus the buyer’s premium in February 2022. Image courtesy of Teddies’ Collectables and LiveAuctioneers

Today, soccer counts more participants than any other sport. There are nearly 250 million registered players, from every country in the world, according to soccer’s 118-year-old international governing body, the Federation Internationale de Football Association (FIFA), which also oversees the World Cup. That number does not count the billions who play at home, in school, on the streets or anywhere that people can scare up a ball and two structures to serve as goal posts. The playing field, known as the pitch, need not be fancy or even of regulation size. It just needs to be accessible. 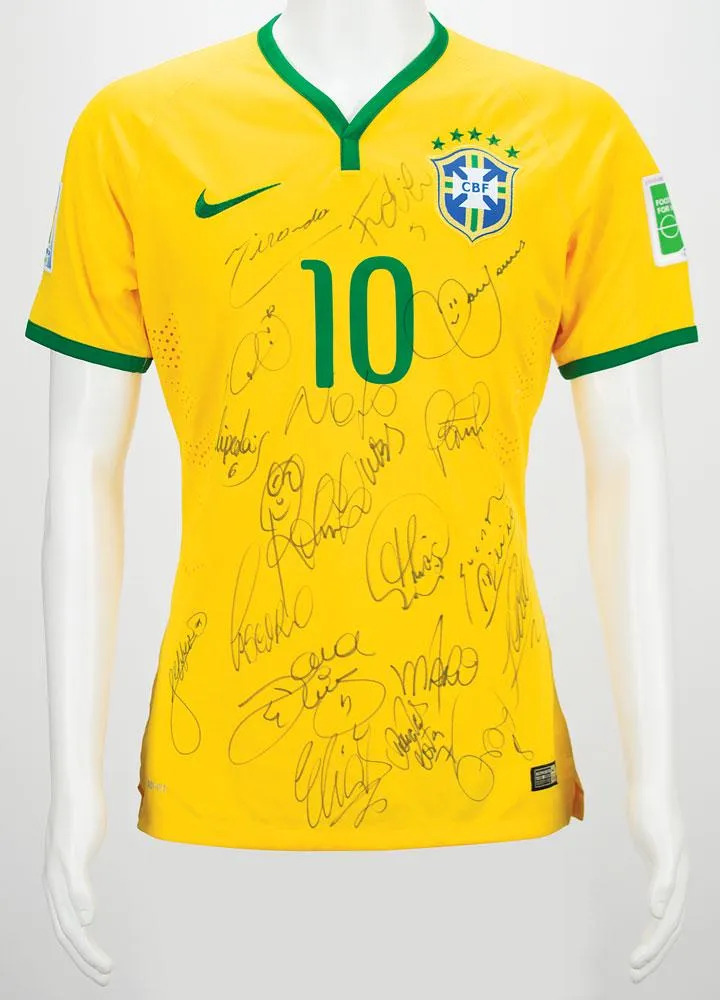 An official Brazilian National Football Team jersey worn by forward Neymar (no last name needed) during a match in the 2014 FIFA World Cup in Brazil includes not only the superstar’s signature, but those of other Brazilian soccer players. It realized $2,020 in July 2020. Image courtesy of RR Auctions and LiveAuctioneers

As the sport gained fans and recognition around the world, FIFA created six regional confederations registering nearly 190 amateur teams by nation. These teams compete for the final prize – the World Cup – as they have every four years since the first such competition was held, in 1930. The inaugural winner was Uruguay, and for their efforts, the team received the Coupe du Monde (French “World Cup”), a stylized figure of Victory fashioned from vermeil (gold over sterling silver) on a lapis lazuli base that weighed nearly nine pounds. In 1946, the cup was renamed the Jules Rimet Trophy to honor the FIFA president who created the World Cup competition in 1929. 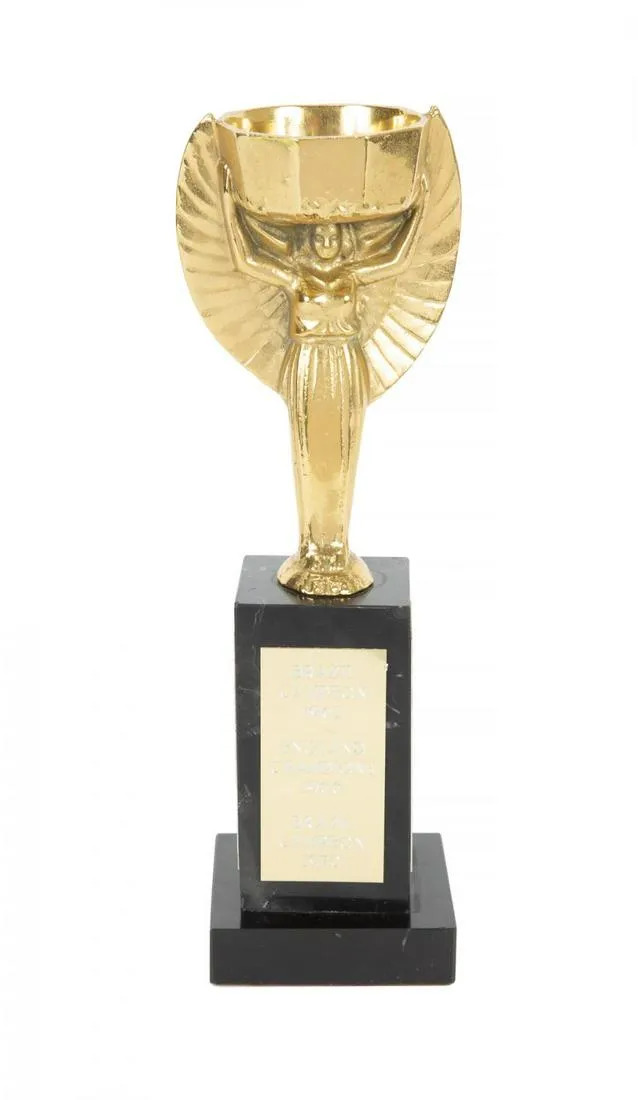 This Jules Rimet Trophy was presented during the 1970 World Cup to Marco Antonio Feliciano, a member of the winning Brazilian national soccer team. The 1970 World Cup was the last to feature the Jules Rimet Trophy with the winged Victory figure, as it was retired according to FIFA rules. This participant trophy brought $5,000 plus the buyer’s premium in December 2020. Image courtesy of Julien’s Auctions and LiveAuctioneers

In 1970, the Jules Rimet Trophy was permanently awarded to Brazil for having won three World Cups in accordance with FIFA rules at that time. A replacement trophy was designed and dubbed the FIFA World Cup’s Winners Trophy. The hollow trophy depicts two athletes holding up the world and is made from nearly 14 pounds of 18K gold on a base of malachite. National teams typically pose with the World Cup raised high after a spectacular win, but are given a FIFA bronze replica that they are allowed to keep. Replica trophies and players’ trophies occasionally come to auction, as with the December 2020 offering of a 1970 Jules Rimet player trophy that changed hands for $5,000. 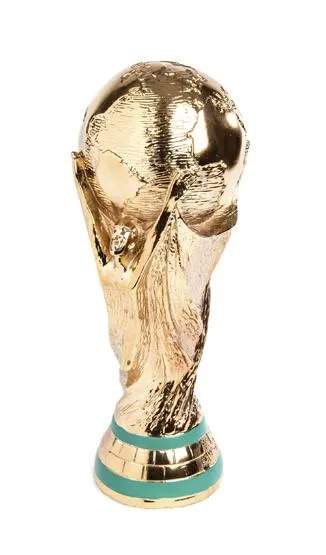 A full-size replica of the vermeil and malachite World Cup trophy sold for £800 (about $950) plus the buyer’s premium in November 2019. Image courtesy of Graham Budd Auctions Ltd and LiveAuctioneers

World Cup memorabilia sparks almost as much competitive interest at auction as the actual games. Soccer is, of course, a team sport, with position players who defend, attack and pass. As in any sport, though, standout players gain fan followings. The list of the greatest soccer stars of all time will always include Pele and Diego Maradona, who dominated 20th-century competition. Both rank on any collector’s must-have list for early team sport cards and stickers in albums (which pre-date the soccer cards of the 1960s), except in later box sets. As with baseball, sports cards featuring legendary soccer players when they were rookies inspire heated auction competition. 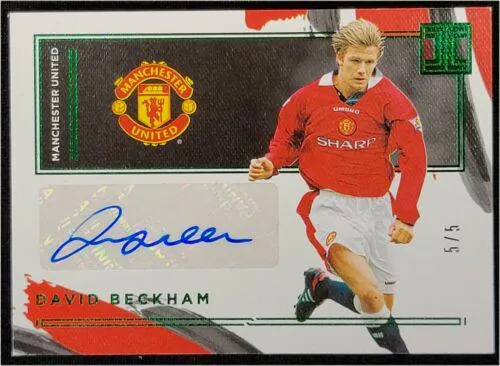 The Panini company created stamps which collectors amassed in albums prior to the advent of soccer player cards in the 1960s. It still issues sporty stamps such as this one featuring David Beckham from when he played for Manchester United. His signature helped the stamp achieve $11,000 plus the buyer’s premium in November 2021. Image courtesy of Mynt Auctions and LiveAuctioneers

Among 21st-century players, Kylian Mbappe, Lionel Messi, David Beckham, Neymar (no last name needed) and Cristiano Ronaldo are the most sought-after for autographs, jerseys, collectible cards, and albums of stickers. Memorabilia featuring these contemporary athletes command strong auction bids, with material from their rookie years being the hardest to find.

As for trading cards, soccer is unusual in that cards featuring its players were almost always sold in sets, not individually. Until recently, soccer cards were almost exclusive to Europe and rarely sold in North America. That has begun to change, and the speed of that change will only accelerate as the United States, Canada and Mexico prepare to welcome the World Cup in 2026, marking it the first time that three countries have jointly hosted the contest. Women soccer players are gaining recognition for their feats, as well. A soccer card featuring American Mia Hamm in her 1992 rookie year achieved $34,440 in June 2021, setting an auction record for the most expensive sports card depicting a woman athlete. Would-be collectors, take note: Industry reports state soccer card values grew by 1,600 percent in 2020, with rookie cards securing the biggest sums. 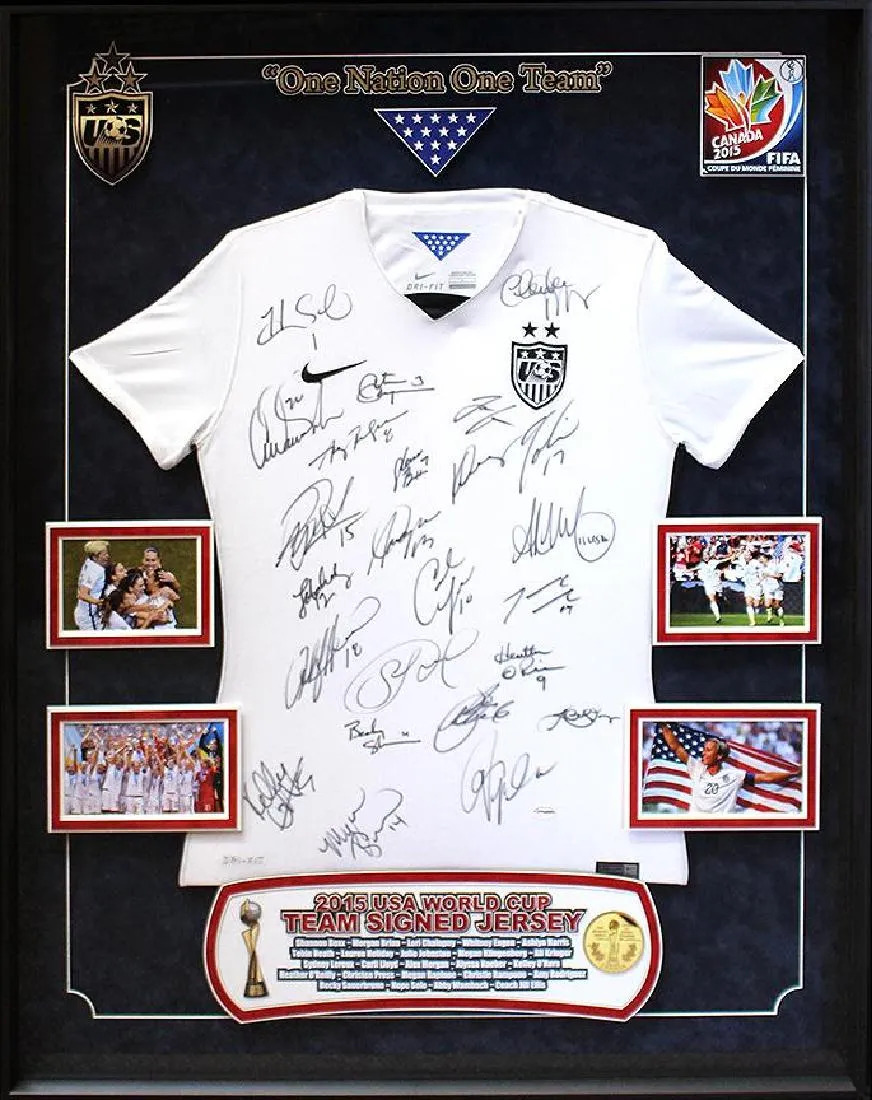 FIFA finally allowed women within its soccer confederations in international matches in 1991. The United States won that year’s Women’s World Cup and went on to win in 1999, 2015 and 2019; the men have yet to match them. This jersey celebrating the 2019 World Soccer winning game against Japan, covered with team signatures, sold for $950 plus the buyer’s premium in April 2018. Image courtesy of Antiquities of California and LiveAuctioneers

Autographs are, of course, an auction favorite. Matt Powers of Powers Sports Memorabilia stated in an interview with sportscollectorsdigest.com, “What makes them unique is soccer is the world’s number one most popular sport and has some of the biggest superstars [where the] growth potential for the market is much greater than other growing sports.” That is especially true for game-worn jerseys, World Cup soccer balls and other official game memorabilia such as tickets, programs, official credentials and early advertising posters. Prime examples sell for thousands at auction. 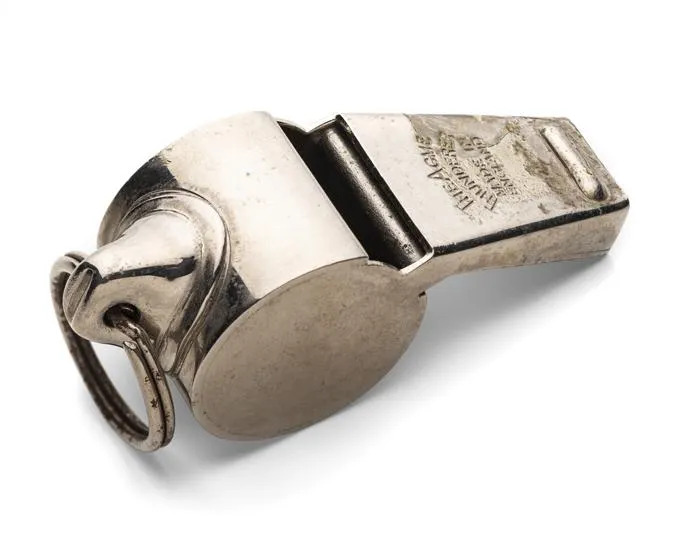 Game-used gear from the World Cup is coveted, no matter how seemingly mundane it is. This referee’s whistle, blown during the final World Cup game in 1974, went for £4,200 (nearly $5,000) plus the buyer’s premium in November 2019. Image courtesy of Graham Budd Auctions Ltd and LiveAuctioneers

During the World Cup, you can walk down streets and alleys of almost any major city or town in the world and not miss a minute of the action as it plays on home televisions and personal radios. Nearly four billion people watched some part of the 2018 World Cup – almost half of the world’s population. It’s reasonable to estimate nearly five billion will watch at least some of the 2022 contest, which will be hosted by Qatar from November 20 through December 18. France is the defending champion. 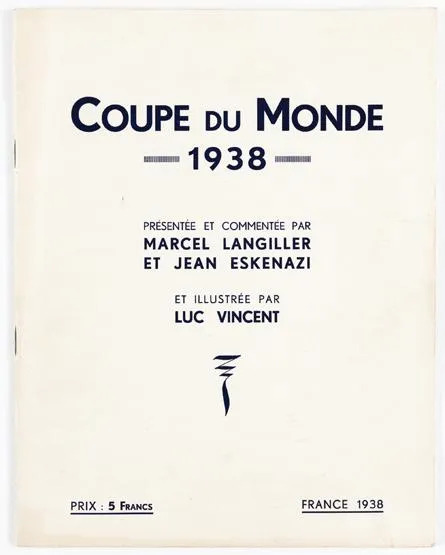 An official tournament program for the 1938 World Cup in France provides a history of the World Cup, details of the competition, team profiles, team jersey colors and accompanying biographies. It auctioned for £1,200 (about $1,400) in November 2019. Image courtesy of Graham Budd Auctions Ltd and LiveAuctioneers

There is no organized sport that unites the world as completely or as thoroughly as soccer. That’s what makes it “The Beautiful Game” in every way – collectible and otherwise. 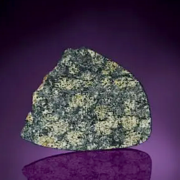 Meteorites: collectibles from out of the blue
Diverse offerings in Jasper52 Nov. 15 fine paintings and prints auction